Trabzonspor’s title hopes are all but over after their defeat to Denizlispor. The team from Trabzon have had a very successful season losing only four games, but drawing two more games than first place Istanbul Basaksehir. Though Trabzonspor have conceded 1.16 goals per game, it could have been a lot worse had it not been for their keeper, Uğurcan Çakır.

The Turkish international has enjoyed a great season, which has led to him being linked with some of the biggest clubs in Europe such as Liverpool and Chelsea with the latter reported to have made a bid. This tactical analysis will look at how Çakır has performed this season and how he could potentially fit into Chelsea’s tactics.

How does Çakır compare to the best? 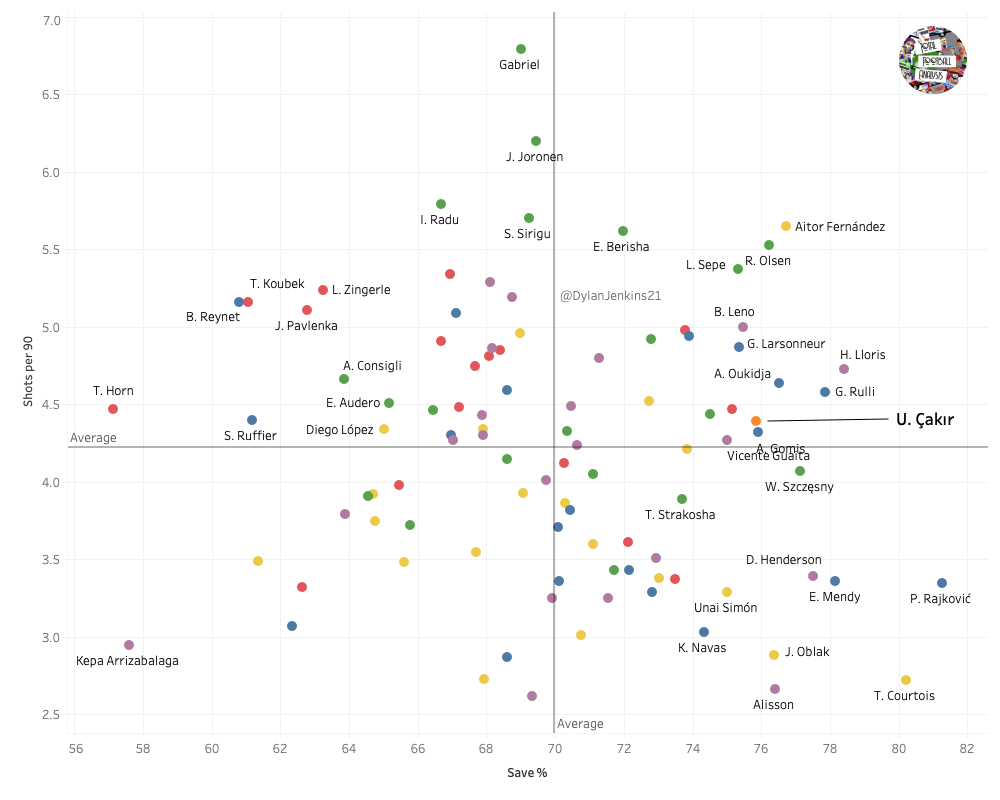 As seen in the above graph Çakır has been one of the better performers this season. He faces an above-average amount of shots on target per 90 (4.39) and also has an above-average save percentage (75.86%). These stats show that although the 24-year-old has a weaker defence, he still manages to perform.

A good way to measure a goalkeeper’s performance throughout a season is to calculate how many goals they have saved above/below expected. The graph above shows the keepers with the best records this season. With the goal-scoring chances that Trabzonspor faced, Çakır was expected to concede 42.25 goals this season. But with his incredible reflexes and shot-stopping abilities he only conceded 35. Per 90, Çakır saved 0.22 more goals than he should have. He has a similar statistical value to Nice’s Walter Benítez and Tottenham’s Hugo Lloris.

Although Çakır only has four clean sheets this term, that’s 0.12 per 90 mins, he has still been one of the best keepers outside the top five leagues this season. The lack of clean sheets but a high save percentage means that his defence is letting him down. Trabzonspor concede 12.41 shots per 90, the fourth-highest in the Turkish league with an expected goal value of 0.10 per shot. His team also have 16.93 losses in their own third, the fourth-highest in the league.

But his ability to save his team and stop high-quality shots have been key to their second-place finish this season. 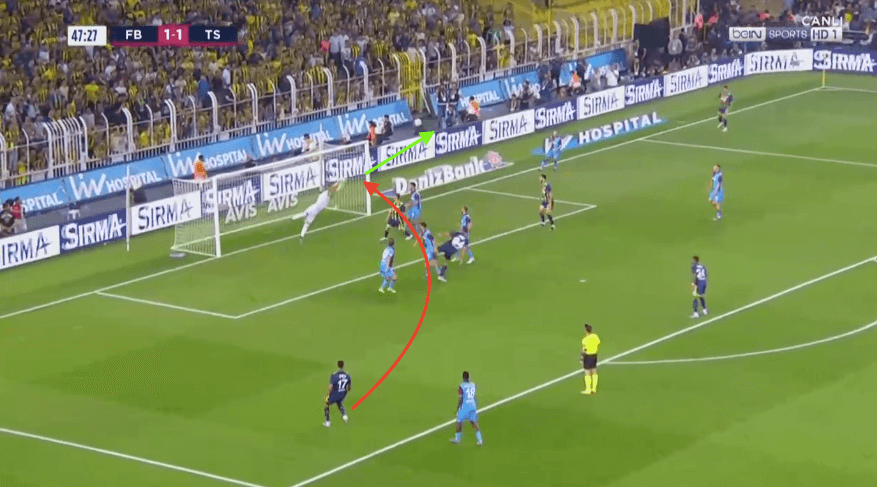 Against Fenerbahçe, the winger cuts inside and curls a well-placed shot heading for the top right corner. Çakır combines his anticipation and footwork to be able to reach the shot. As the shot isn’t too powerful the keeper will need to generate power into his save. He cleverly uses both hands to palm the shot out for a corner. This is a prime example of using his 1.91m height and footwork to stop a very difficult shot.

Çakır’s footwork is a key part of his shot-stopping ability. Although he is tall, he is very nimble, this allows him to move across his goal line when anticipating a shot. However, it can also come in handy when he needs to change the position of his body for a shot he couldn’t anticipate.

From the same game against Fenerbahçe, Çakır faces another shot from distance. This time, his teammates are able to get a block in. If we look closely at Çakır’s body language we see that he is already low to the ground, ready for a shot. This helps him save the shot as it’s deflected off one of his defenders. He was prepared to save the shot to his left but quickly readjusted his body to save to his right.

His excellent footwork is well aided by his incredible reflexes. This combination helps him save shots that he isn’t expected to, as evident in the image below.

In this instance against Gaziantep, their player looks certain to score with the amount of space he has to aim at. Çakır anticipates where the strike is likely to go and spreads himself within that area. He uses his big frame to block a certain goal. Çakır uses his reflexes to save 52.7% of shots with reflexes. Instances such as this show how he has saved so many more goals than he was expected to.

Ability to shut down opponents

When compared to every goalkeeper in Europe’s top five leagues, Çakır has the fifth-most exits per 90 with 2.25. His ability to race out of his goal and shut down attackers is one of his best attributes. Although not perfect, it gives him a better chance of saving shots, especially in one-on-one situations.

Çakır is fearless when it comes to preventing goals by throwing himself at shots. With his team’s likeliness to give the ball away close to goal, his one-on-one skills are extremely important in stopping opponent’s counter-attacks.

Choosing the correct approach when facing a one-on-one situation is very important, and Çakır is very skilled at this. In the above example, he waits for the striker to take a touch, and engages the ball. After engaging, he spreads himself as soon as the opponent prepares to shoot. This technique allows Çakır to get as close to the ball as possible, shutting down the area of the goal to aim at. It results in the shot hitting him in the chest, preventing a goal.

Above is an example of Çakır being alert even during a pressure situation. As he realizes a one-on-one situation developing he engages and prepares to react. He can’t spread as the player is too far away from him. But the player doesn’t take the shot on as anticipated. Çakır notices this and engages further, putting the opponent under more pressure and closing down the angle. Once again, the ball ends up hitting Çakır’s large frame and going out for a corner.

Although he saves a lot of goals with his ability to smother opponents, he can sometimes get carried away and close down his opponent too early.

Against Sivasspor he made an exiting error which led to a goal. With the opponent coming towards goal from a tight angle and defenders beginning to close him down, it would be more effective to stay closer to the goal as the angle is already tight. Instead, he rushes out towards the attacker. The Sivasspor man is able to just curl the shot around the keeper.

As well as using his exiting skills to stop goals, he also likes to use them to create goals. Çakır’s fearlessness and ability to read the flight of crosses means he can claim crosses and start attacks from within his box.

From a lofted corner, we see him come out to his six-yard box and jump higher than everyone else to claim the ball. After gaining possession, his first instinct is looking to start a counter-attack. He sprints to the edge of his box and looks to find a teammate. Çakır starts 0.38 quick breaks per 90 and has an xG build-up value of 4.65.

Çakır prefers to start counter-attacks with throws, 96.9% of them being accurate. He does sometimes send the ball long, but these are usually long hopeful punts down the pitch, rather than accurate passes to teammates, contributing to his long pass completion of just 56.58%.

Here, we see another example of Çakır reading the flight of a cross and coming to claim it. He isn’t contested this time and gives a clear call that the ball is his. This gives his attacking players a chance to begin their counter-attack. The Turkish international finds a good throw over the top that falls perfectly into the path of his teammate.

With all his great assets that contribute to his shot-stopping, he does have one flaw. Çakır is very much an acrobatic goalkeeper, meaning he likes to palm shots away rather than catch them. 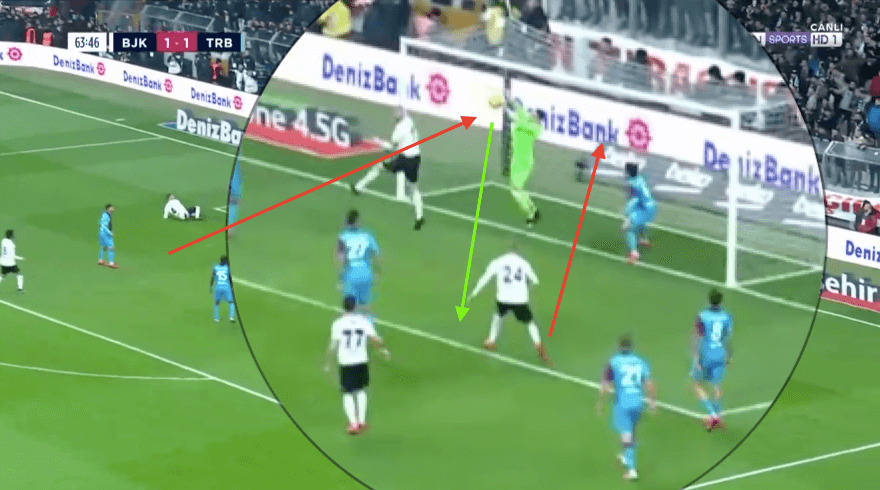 During the second phase of a corner against Besiktas, Çakır faces a tame shot on goal. Instead of catching the shot, he decides to parry it. He incorrectly reads the power of the shot as it would be a simple catch. The ball falls straight to the feet of Domagoj Vida who smacks the ball into an empty net.

His technique from saves has been questioned when facing long shots too. He has a bad habit of using the wrong hand to save a high shot, causing him to parry the ball back into a dangerous area. 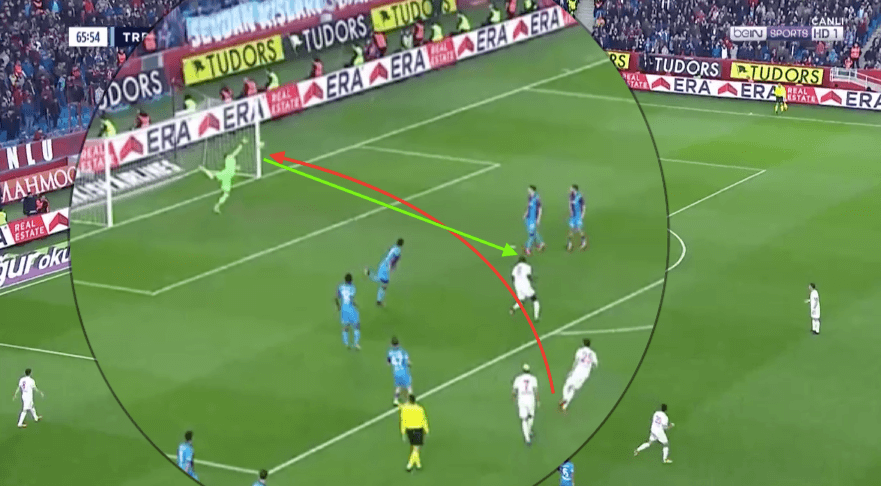 In the above example, he faces a fairly tough shot. He uses his right hand to save, which is his highest hand – this is the wrong choice. Çakır’s left leg is still on the floor, meaning that he doesn’t need to dive as he just needs to use his footwork to shuffle across his goal to make a catch. An alternative save would be to either use his bottom (left) hand or both hands to palm the ball to his side, rather than back into danger. This passage of play doesn’t lead to a goal but Çakır needs to improve some of his save techniques if he wants to become better.

Conclusion – is Çakır the right choice for Chelsea?

The Trabzonspor keeper has been heavily linked to replace Kepa Arrizabalaga at Chelsea, but which one is better? As previously mentioned, Çakır has saved 7.25 more goals than he was expected to. With the chances that Kepa has faced he was only expected to concede 34.05 goals, however, the Spaniard conceded 42 goals this season, giving him a difference of -7.95. Making him one of the worst-performing keepers in Europe this season.

The graph above shows that Çakır is much better than Kepa at shot-stopping. Çakır has a save percentage of 75.86% to Kepa’s 57.58% with Çakır facing more shots per 90. The current Chelsea keeper concedes 0.42 goals per shot whereas the Turkish international concedes 0.24 per shot.

However, Kepa’s passing stats are much better. One weakness in Çakır’s game is his long passing ability. But if Çakır was to join Chelsea, this wouldn’t be a huge negative as his short passing is still very good. 76.11% of Kepa’s passes are short or medium whereas only 56.82% of Çakır’s are.

This scout report has analysed why Çakır has had such a good season with Trabzonspor and also areas he could improve in. Going off previous seasons, Çakır would be an improvement for Chelsea. His great footwork and reflexes help him prevent goals from distance. His braveness and anticipation help him stop shots closer to his goal. However, with no experience playing in Europe’s top five leagues or the Champions League, there may be better options.