Bayer Leverkusen have been a team that have been trying to stack up young talent and develop them for the last couple of seasons so that they could either consistently qualify for the Champions League or to make a profit on their young players. The likes of Julian Brandt, Leon Bailey and Kai Havertz, who is close to completing an incredible transfer to Chelsea, have usually had the shine but Leverkusen still have another attacking gem in Moussa Diaby on their hands.

The 21-year-old winger was signed from Paris Saint-Germain at the beginning of the 2019/20 season for £13m and has shown bright sparks under Peter Bosz. This tactical analysis will showcase the raw talent that the French U21 international has but will also look at his weaknesses too.

As a winger, it should come as no surprise that Diaby’s best attribute is dribbling. Like most players who play in this position, he is a diminutive player who possesses a huge amount of pace that helps him beat players. In an era where teams are heavily reliant on ball progressing via passing, Diaby’s skill set is becoming more of a rarity but one that still holds a lot of value. Dribbling is an important asset for a winger to have since they are usually required to beat an opposition defender to either progress the play, create or score. Wingers with great dribbling will also be able to get out of opposition traps and double teams, which will help the team in since it can give the team an added dimension in their attack.

Diaby has a trademark dribble that works surprisingly often despite its simplicity. The move utilises his small frame and lightning-quick acceleration. The move is best used in a 1vs1 scenario is extremely lethal in transition as there is so much space to run into. 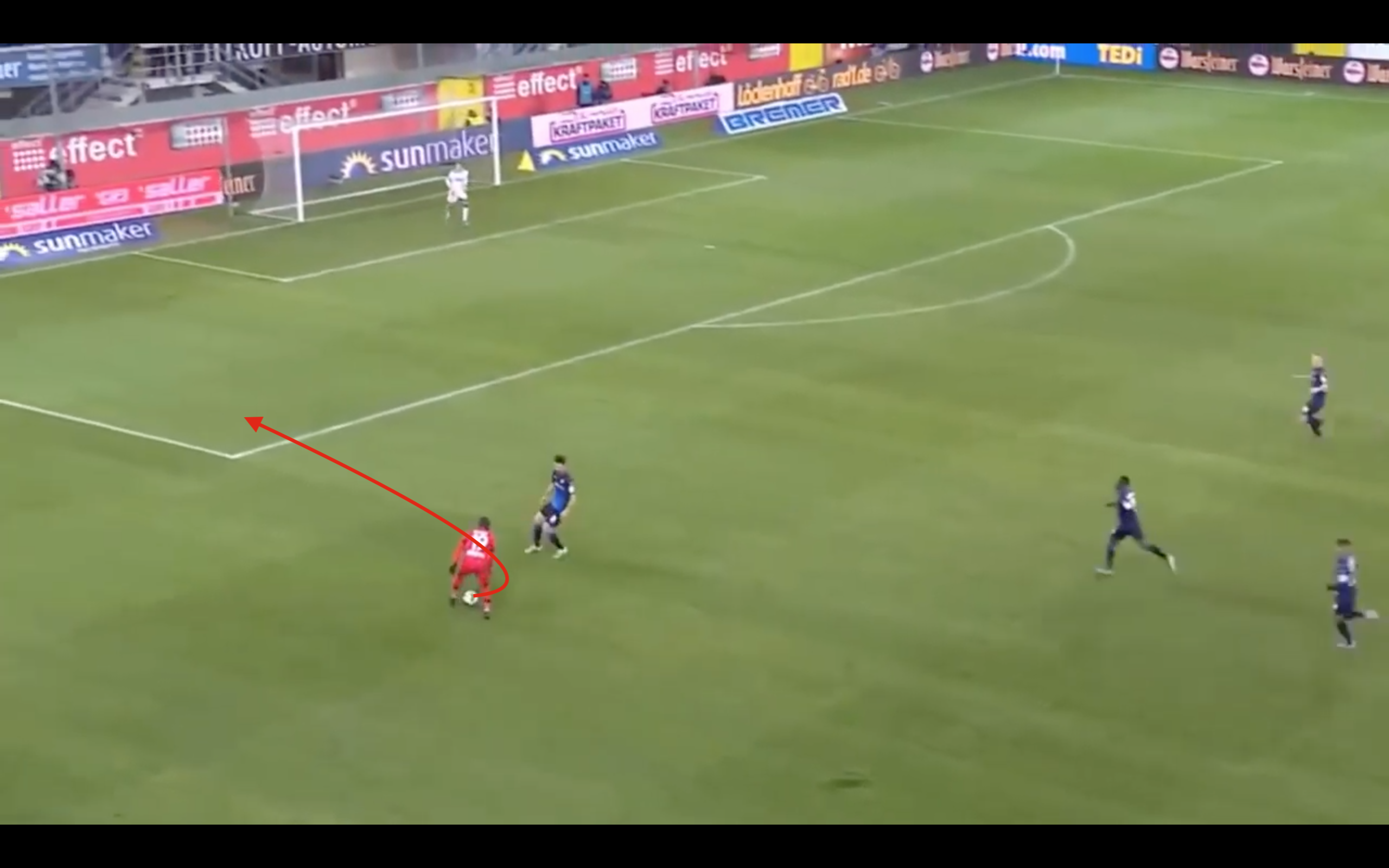 This example above is a perfect example of his trademark dribble used in transition. He receives the ball and controls it with his left foot while slowing down. While most players tend to wait a couple of more seconds to drive past the defender, Diaby takes a huge touch with his right foot into the open space just a split second after decelerating and taking a touch with his left foot.  The reason why this is so effective is two-fold. Firstly, as he decelerates and controls the ball, it lulls the defender into doing the same but since the Diaby has the ball, he ultimately has the control of the next action and would therefore be a step ahead. The second reason is that even if the defender knows it’s coming, he is unlikely to be able to stop it given the acceleration of Diaby. This move helps Diaby be in the top 10 in terms of dribbles per game at 7.55 with a very good success rate of 55.41%, which is close to the elite level.

While dribbling can be used as a way of creating chances, Diaby has a great array of skills that make him a dangerous outlet and someone much more than a speedster. He ranks top 20 in the expected assists and assists for Bundesliga players, which is a huge part down to his fantastic run making. He ranks 3rd in the league for progressive runs per game with a value of 3.85 per game, which is a fantastic tally that is only bettered by now AC Milan striker Ante Rebic and Diaby’s teammate Paulinho, both of whom have played limited Bundesliga minutes. His speed and positional awareness are also what make him a threat on transition where Bayer Leverkusen excel under Bosz. 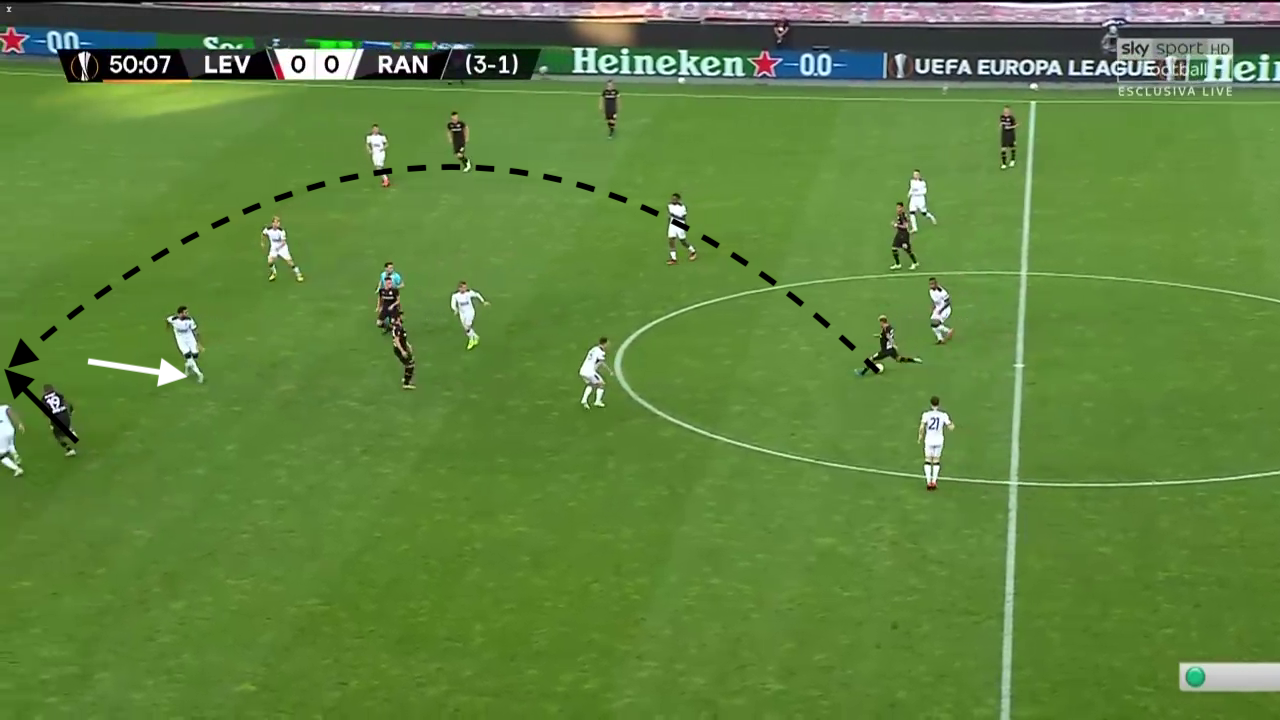 Here, against Rangers in the Europa League, he makes a fantastic run in behind. The opposition centre-back pushes up in order to make it difficult for Leverkusen to build-up but since the whole backline didn’t move up with him, there was space vacated by the defender. Diaby, knowing this and knowing that Rangers can’t play the offside trap because of the defender’s movement, makes a darting run in behind and is found, which opens the scoring for the team. While in this scenario Diaby gets the goal, he makes similar runs but closer to the wing so that he gets in a position to cross to set up his teammates.

Speaking of crossing, this is an attribute that Diaby has great proficiency in already. While his movement makes it easy for him to cross as he is usually in acres of space and only has to cut the ball back for a teammate to run onto, he can still make difficult crosses look easy. This is shown by his crossing numbers in comparison to the league. He ranks 6th in the league in crosses per game with 5 but also has a really good completion rate of 35.58%, which is a rate only bettered by Bayern Munich’s Kingsley Coman out of players who have more crosses per game than Diaby. A huge benefit for Diaby’s crossing ability is that he can deliver pinpoint crosses from both feet meaning that it becomes difficult to stop him. Targets such as Kai Havertz and Kevin Volland have hugely benefitted from Diaby’s two footedness. 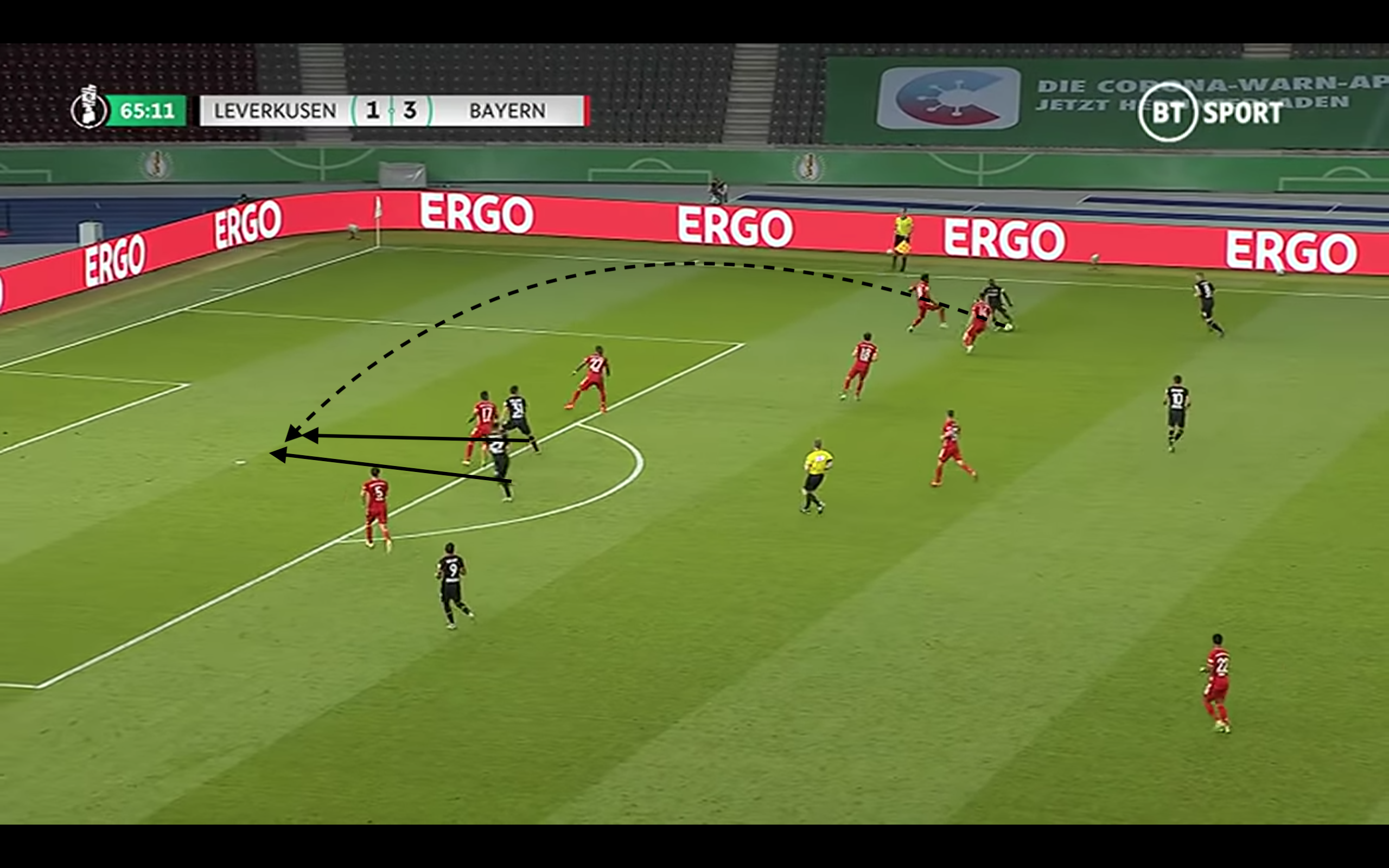 Here against Bayern in the  DFB Pokal final, Diaby delivers an exceptional ball despite being double-teamed by Ivan Perisic and Alphonso Davies. While he is accustomed to making floor crosses more often than not, the way he delivers this ball is his usual technique. He tends to clip the ball with his instep for more curl especially here given how far out he is so that it can bypass Jerome Boateng in defence. Both Volland and Havertz especially make good runs to find space in the box but Volland fails to connect with the ball despite it being right in front of him, which also ultimately puts off Havertz. While crossing was often regarded as a low-value skill in creating chances given the relatively low completion rates, teams such as Manchester City, Bayern and Liverpool have dominated football with their ability to deliver perfect balls into the box with players like Kevin de Bruyne, Joshua Kimmich and Trent Alexander-Arnold using it as a staple in their creative output. Therefore, Diaby’s quality in this department gives him great scalability if he were to move to a team that is contending for major honours consistently.

While Diaby has great dribbling and creative output that are accompanied with good finishing ability and an ability to find good quality shots, there are some weaknesses in his game. His attacking contributions to a team make him a very desirable prospect especially at the age of 21 for a big side and his talents are very scalable but his work defensively is worrying, to say the least. Playing for a Peter Bosz side means having to do a lot of great pressing work yet the numbers suggest that even with a system where defensive work is required, Diaby fails to be even average in this department. He ranks in the 13th percentile out of players in the top five leagues for attacking midfielders or wingers in successful pressures per game as he puts up a measly value of 3.39. To put this into context, his teammate Karim Bellarabi who plays on the other wing ranks in the 80th percentile and puts up a whopping 6.01 successful pressures per game, which is nearly double of Diaby’s output.

Of course, numbers don’t tell the complete story especially when it comes to defensive numbers. There are still glimpses of effort and good defensive work that give some hope for the future. 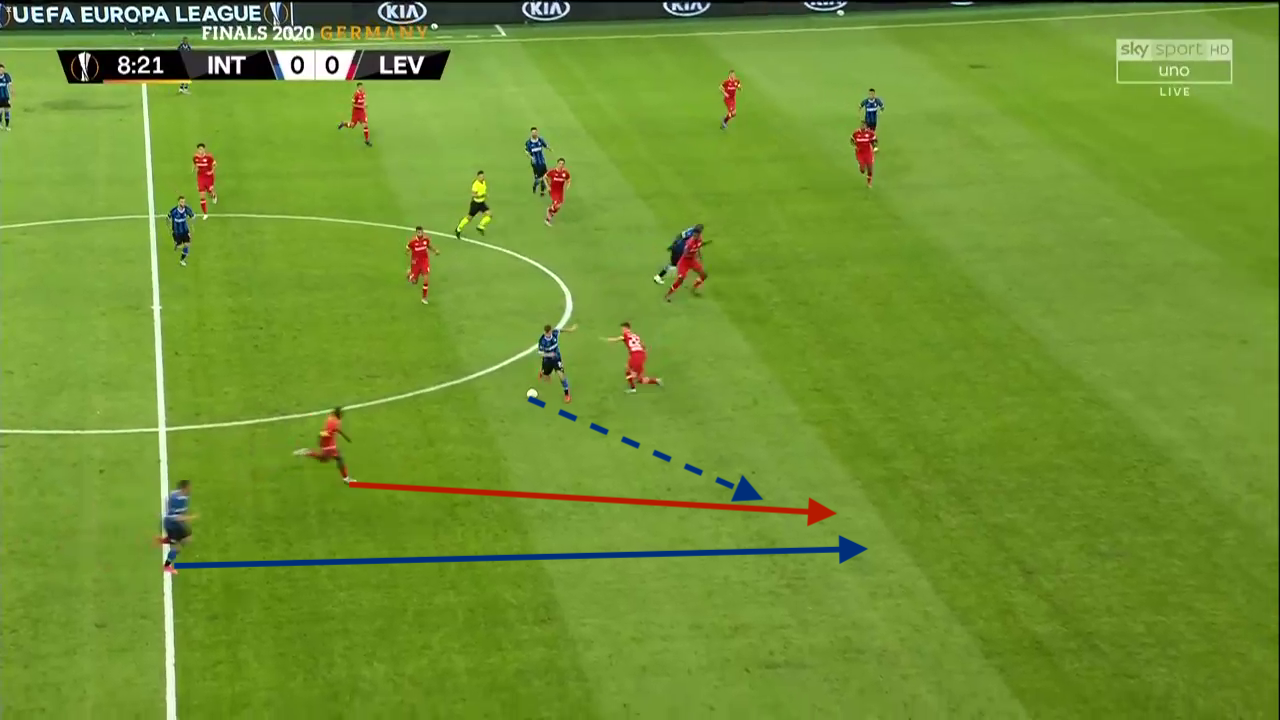 For example, against Inter Milan, he tracked back with a sense of urgency knowing that the midfielder was looking for his teammate making the overlapping run. Diaby had great awareness and good positioning to cover the pass so, in the end, Inter don’t play it to that man. While that is a good play on Diaby’s part, it doesn’t show up on the data in this day and age. This is something that he does regularly but it is also the bare minimum required of him.

Given that he plays under a coach renowned for his pressing philosophy, there are worrying signs as there seems to be little improvement made by Diaby in this area. He works very hard to get back and that is undoubtedly a positive but in the modern game, the ability to press is so key but he does it very ineffectively as he can’t seem to be able to close passing lanes often. The fact he is still only 21 maybe gives some hope that can he be better defensively but the likelihood is that he won’t really improve on that end.

Ultimately, this scout report highlights the potential that Diaby has in terms of attacking quality but is bogged down by his subpar defensive efforts. His output offensively does massively boost his overall impact as the skillset he has at such a young age is very impressive. Unfortunately for him, top teams rarely take chances on players who can’t offer something defensively especially when the player is playing for a coach that implements heavy pressing tactics like he is under Bosz. It would be a huge shame for him to not get the chance to play for a top team considering how talented he is on the attacking end because he has star potential for sure. With Havertz likely to leave, Diaby could become the number one attacking threat for Bosz’s side, which presents its challenges but given his strengths, there is little doubt that he can do a good job to replace the German international.