Although it was September already, these were still the first fixtures for European national teams. At the Estádio do Dragã, Portugal welcomed Croatia, runner-up in 2018’s FIFA World Cup. Despite having a lot of familiar names on the pitch, the match was very one-sided in as Fernando Santos’ troops dominated the game.

In this tactical analysis, I am addressing some details of Portugal’s 4-1 victory in the first UEFA Nations League game of the new campaign. The analysis is particularly focusing on the offensive approaches of both teams.

Cristiano Ronaldo was stung by a bee, injured his toe, and failed to make into the match squad. Portugal still played in a 4-3-3, with Diogo Jota, Bernardo Silva operating at flanks. João Félix was the striker. The backline mingled a youngster and an experienced servant of the country – Rúben Dias (17 caps) and Pepe, the former Real Madrid defender started together.

Croatia were without Ivan Rakitić, the former Barcelona man is now a Sevilla player. They were also without Luka Modrić in the lineup. Zlatko Dalić still has a pretty strong team – Mateo Kovačić and Mario Pašalić played as the midfielders. It was a 4-2-3-1 formation.

I have not watched the Portugal national team for a while, the development of Santos’ tactic has surprised me a bit. With more possession %, passes, and rooms that the opponents offered to develop the attack, the positional plays of A Seleção had strong dynamism.

Given Danilo Pereira is not the most competent forward passer, the advanced midfielders operated asymmetrically. Bruno Fernandes was more likely to appear in the offensive third, while the build-up relied on João Moutinho more often.

Below are the top passing links and average position of Moutinho. The Wolves midfielder is definitely the pivot of the team, being able to connect the defenders and the forward players. Apart exchanged a total of 25 passes with Raphaël Guerreiro, the top passing links of Moutinho were evenly distributed among teammates. Dias, Pereira, Fernandes, Jota, and Silva were on the list, with a very close number of passes occurred.

Simply speaking, Portugal opened the shape to occupy more zones on the pitch. The full-backs operated asymmetrically, while Jota and Silva were mostly staying narrow. The inverted wingers have allowed Félix to roam himself as a “false-9”, pulling defenders away from the backline.

With Moutinho, a good passer with great vision was on the field, ball circulation of the home side was strong. Therefore, the attack could develop at any vertical zones on the pitch. When Portugal needed to switch the attacking focus, hitting the weaker vertical half, Moutinho would drop to the left half-spaces as a link player, playing the ball to the wide zone.

Moutinho has the long-ranged passing skillset that places a ball to the front foot of the runner at flanks, allowing the receivers to continue sprinting while receiving the ball. The below image was an example of this, with Jota staying narrow occupying the right-back. Huge spaces were opened for Guerreiro on the left. 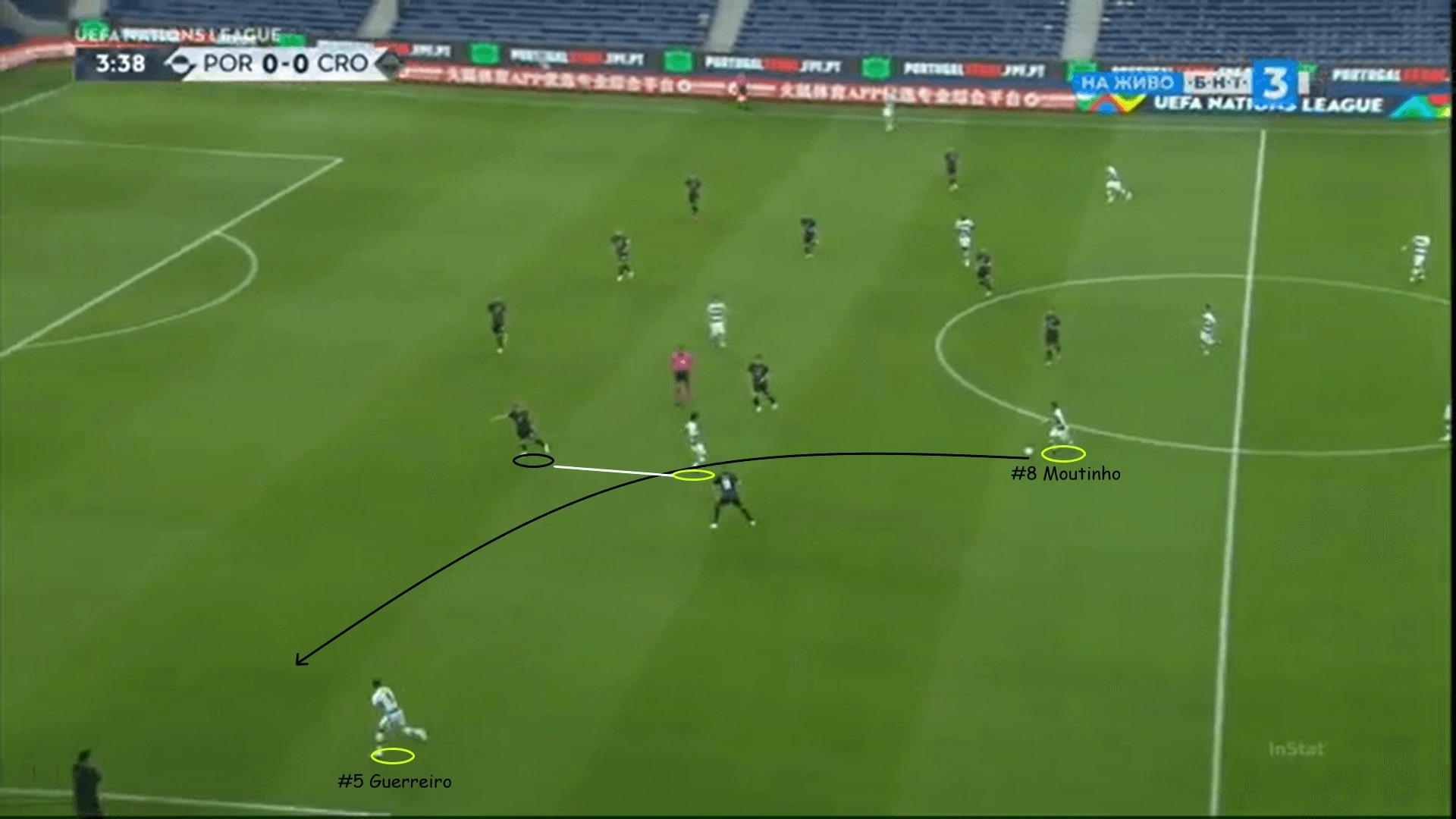 Intriguingly, Santos’ team went for more control in this game. The very low number of cross of Portugal was proof of the mindset –averaging 25.6 crosses per game in 2019, Portugal only had 9 crosses in this game. This was very reasonable as the team was without a traditional striker who could attack from deep, making runs into the six-yard box. Crossing without a clear intention would expose the team in transitions, especially when the structure was not ready to collect second balls outside of the penalty box.

Below is an example of the attacking tactic. Guerreiro was on-the-ball at the wide zone, picking his options. Since Félix came from deep initially, no player was attacking depth. To avoid giving possession unnecessarily, the left-back safely picked the closet option. 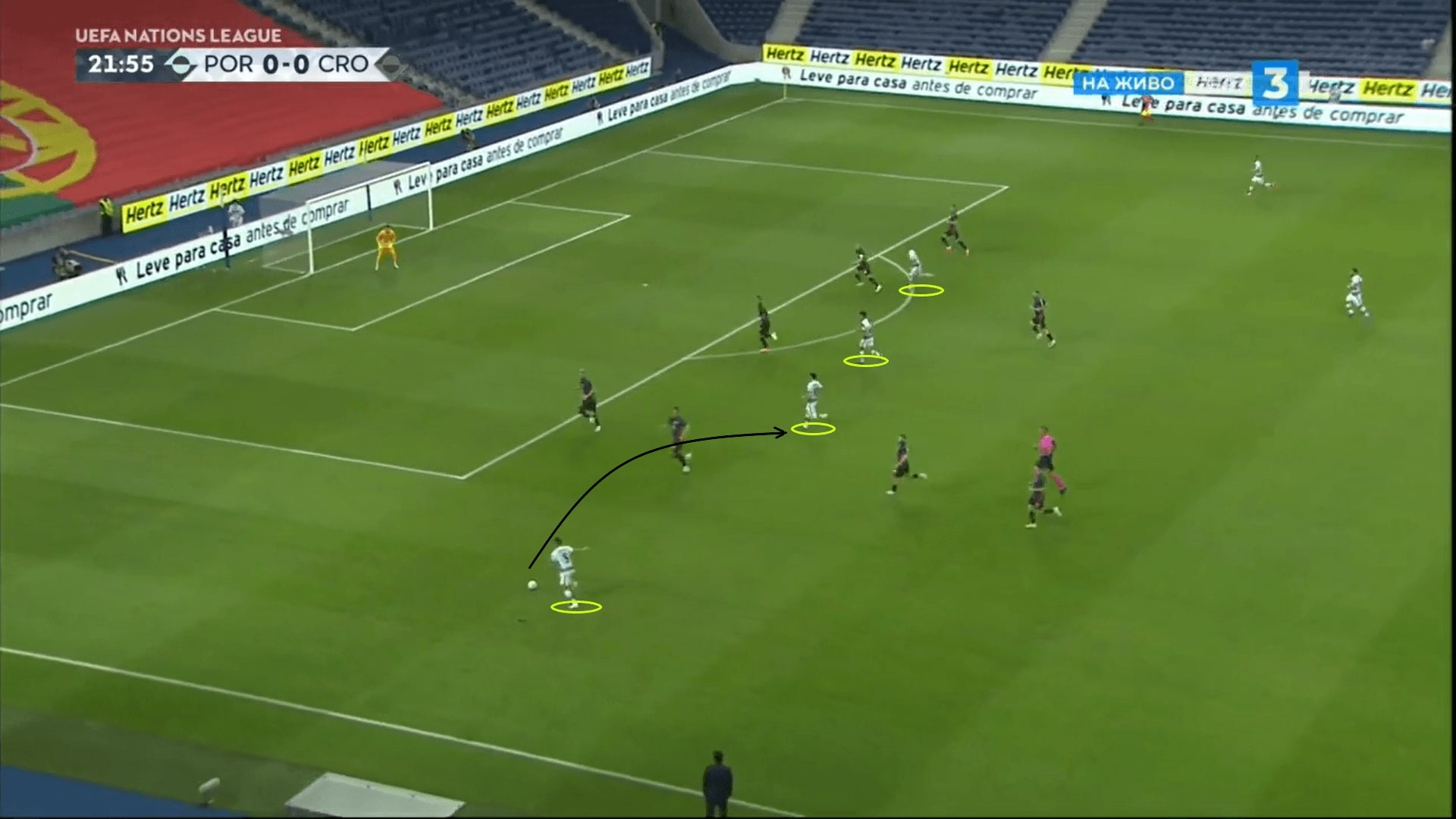 Another example here. Even though there was a 2 v 2 inside the penalty box, Guerreiro did not cross, instead going short to Jota. The slightly delayed timing to cross has bought time for the midfielders to push higher, closing spaces to attack the second balls in case the delivery was cleared.

Portugal had a decent offensive approach this game, but the crossing accuracy could be better than the 11.11% of this game. 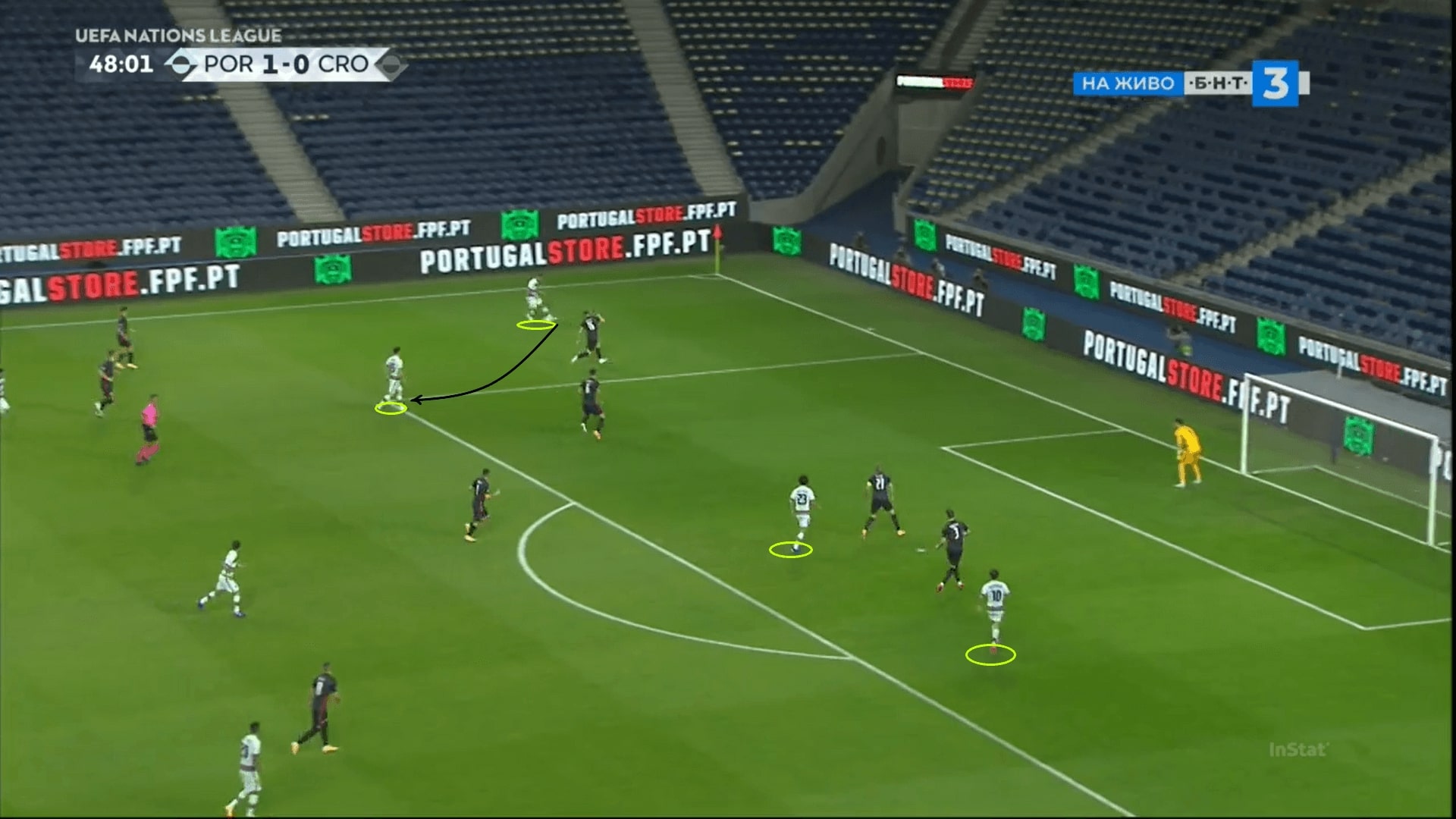 On the right flank, it was more about individual quality and the display of João Cancelo. The Manchester City right-back improved the dynamism of the team by supporting Silva. Intriguingly, instead of making traditional overlapping runs in the wide zone, Cancelo more often attacked the half-spaces by underlapping runs. With Silva’s left foot and pulling the left-back out of position, the diagonal passing lane to Cancelo was very natural to release the player.

Below is the heat map of Cancelo. Apart from being heavily involved in the central third, the right-back appeared in zone 17.5, at the right half-spaces. Comparatively, he has seldom touched the ball in zone 18.

Cancelo had a decent game, also having qualitative superiority against an isolated defender. There were some cases that the right-back could beat the confronted player and carry the ball into the final third, also happening in the transitional moments. He needed room to dribble, so Silva mostly staying high and provided the attacking height of the team, occupying the left-back to create spaces for Cancelo to dribble forward.

Below is an example of it. Cancelo continued charging forward after beating the isolated defender. Meanwhile, huge spaces were available because of Fernandes and Silva’s high positioning that avoided the defenders and Kovačić from stepping out. 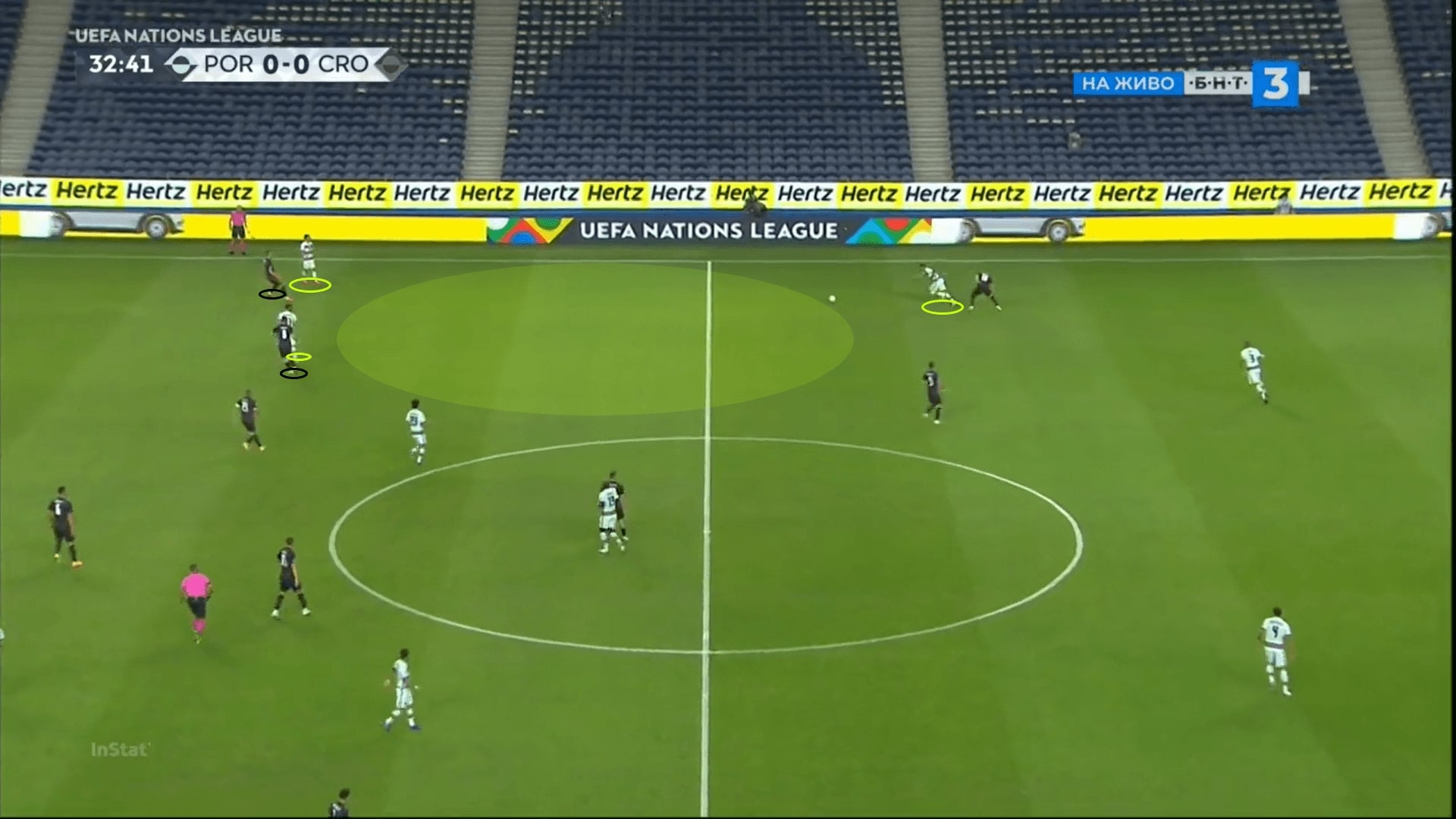 This is the supportive run that I talked about was demonstrated below. With Silva opening his body in the wide zone, he was natural to release the runner at half-spaces, who was always Cancelo.

Cancelo was able to boost the dynamism of the team, even though he was right-footed, drifting into the centre seemed very fine too. Apart from scoring a goal with his weaker left foot, several efforts of exploiting central spaces were also successful from Cancelo that caught the opponents by surprises. 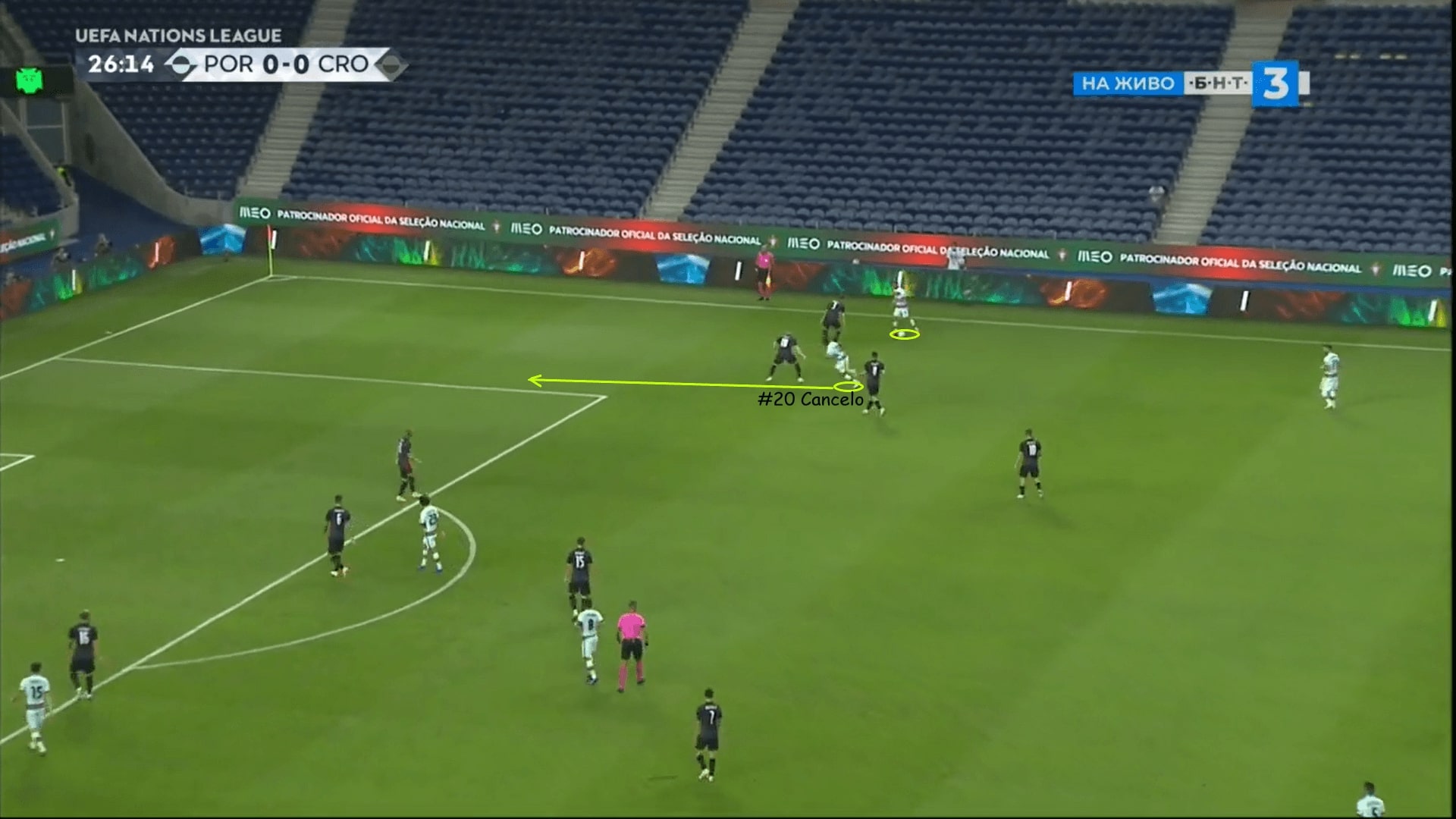 Apart from all the above strategies to attack the opposition goalkeeper, Portugal were also very good at making the deep runs to attack height. Combining with the dropping movements of Félix, Croatia did not have a way to deal with it throughout the game. The backline of Croatia was man-oriented, the positionings of defenders were disrupted because of Félix opening spaces diagonally or behind the defence. The approach directly led to a goal.

Here, Félix moved diagonally towards the ball to provide a passing option, getting Dejan Lovren out of position. The Atlético Madrid man was mostly a decoy, as the real intention is the find the runner behind the defence, who was Jota. Jota was quick and being able to exploit spaces left behind Lovren, facing the keeper directly and scored. 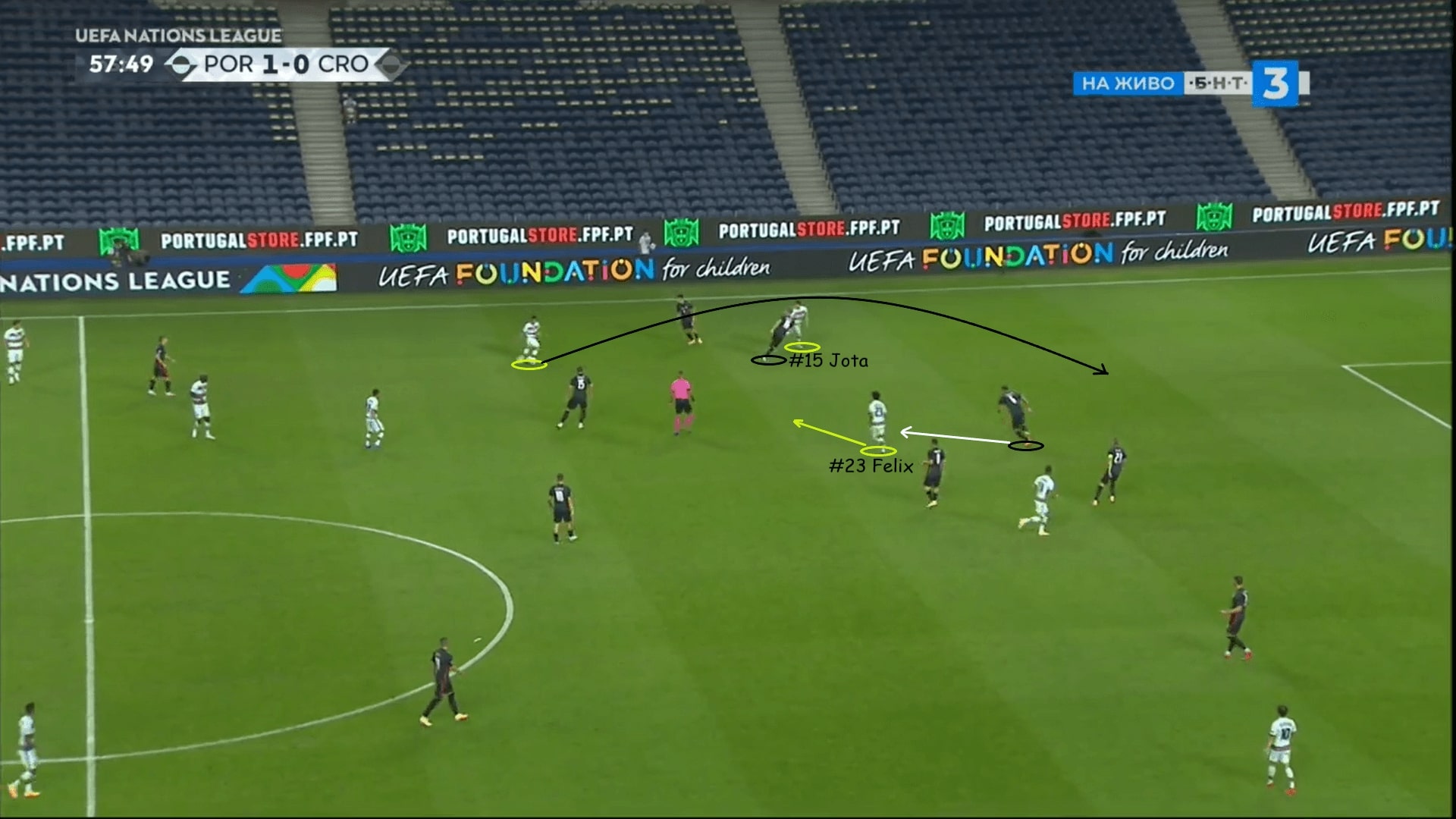 Croatia developing through the wide zones

This is an interesting game from the tactical standpoints, as both teams were not attacking in a fixed shape. For Croatia, the build-up varied from a 2-2 boxed shape or a 3-1 or 3-2 at the midfield. Since Portugal set the midblock and used medium-low press, the away team did not face trouble when playing at the backline. Therefore, this analysis delves on their main strategies to create chances.

To send the ball into advanced areas, or behind the Pereira, Croatia attempted to overload the second line of the defence. By placing three to four players, the opposition midfield was stretched, and the horizontal gaps were available for passes. From a micro perspective, Pereira was doubled up on by the Croatians, manipulating the Porto midfielder could open a wider passing lane for a free player.

The below scenario was a horizontal overload at the midfield, where Croatian had four players against the midfield three of Portugal. With Pereira slightly off from his position because of the dropping player, the free player at the half-spaces was found with a wider passing lane 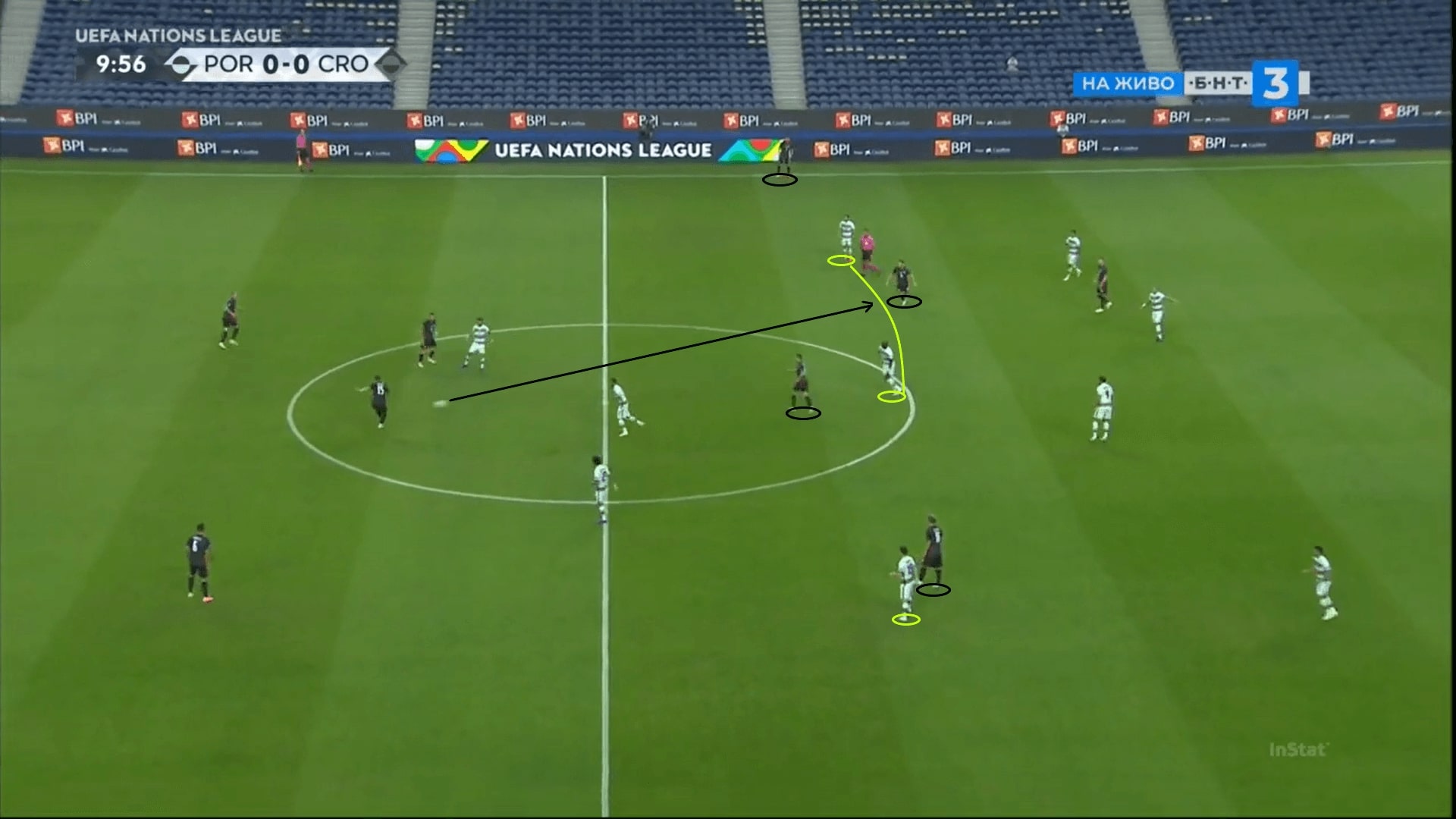 However, developing attacks through the centre was a rare scene in this game. Because of the amount of pressure received from the backline, the next pass was likely to be a wide pass that hit the wide zone. Another focus of the Croatians was to attack spaces behind the full-backs. Since Guerreiro and Cancelo often left their positions, spaces were available at their back and they relied on Pepe and Dias to cover.

In the transitions, the approach was very similar – bypassing Pereira as quick as possible and get into spaces behind the defence. Guerreiro was of position to track the player, given Andrej Kramarić was not the type of player who was strong at dribbling, a pass was more likely to happen. 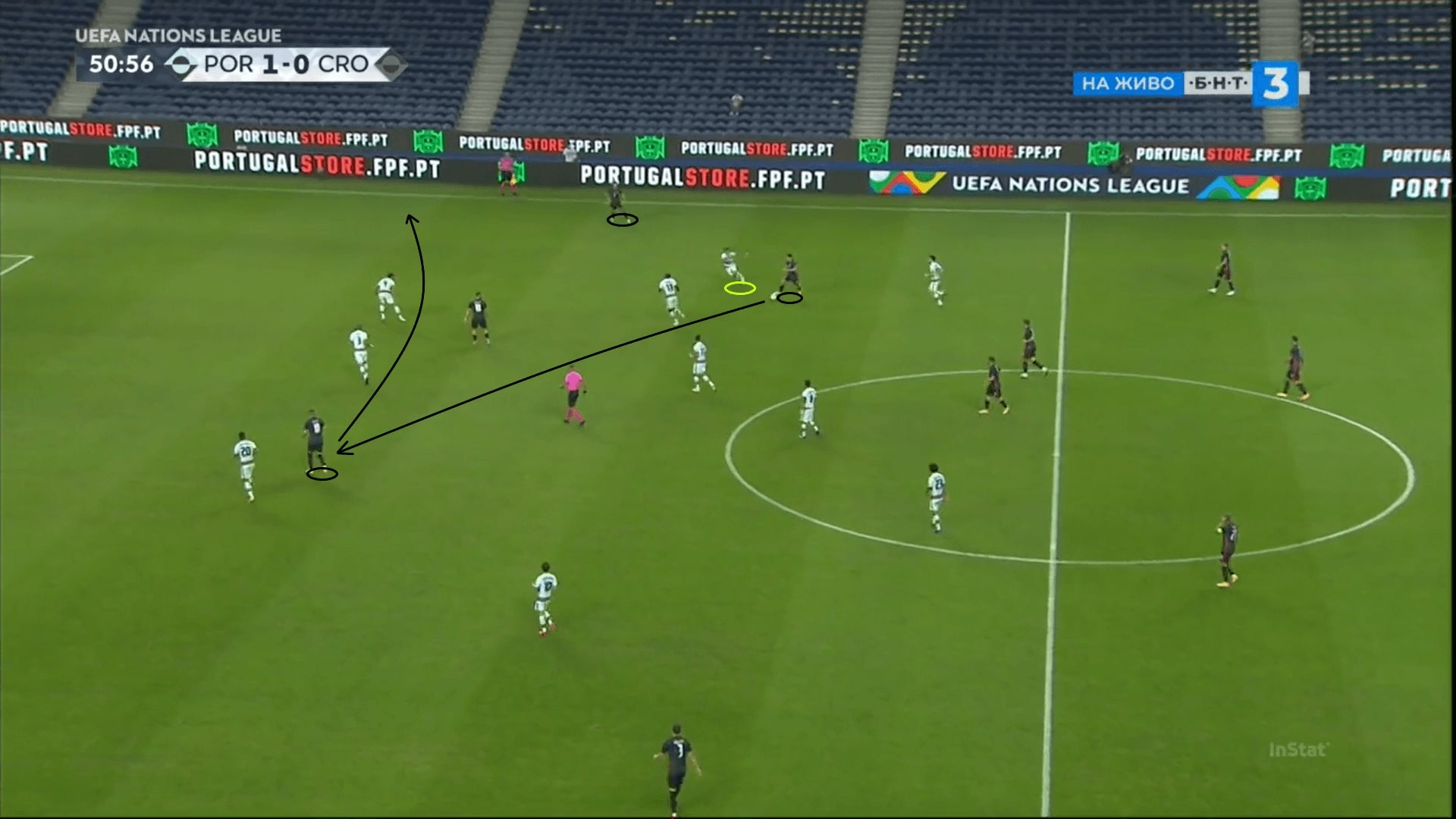 In the second half, mostly at the period that the game was dead, more often the Croatians were confusing the Portugal defence by the dropping players. When the defenders were not leaving positions to track the dropping players, neither the winger nor Pereira could immediately shift to the target.

The below scenario is an example of using the free dropping player to develop an attack. The receiver was between the lines and the players, and the opposition was uncertain about who to close him. 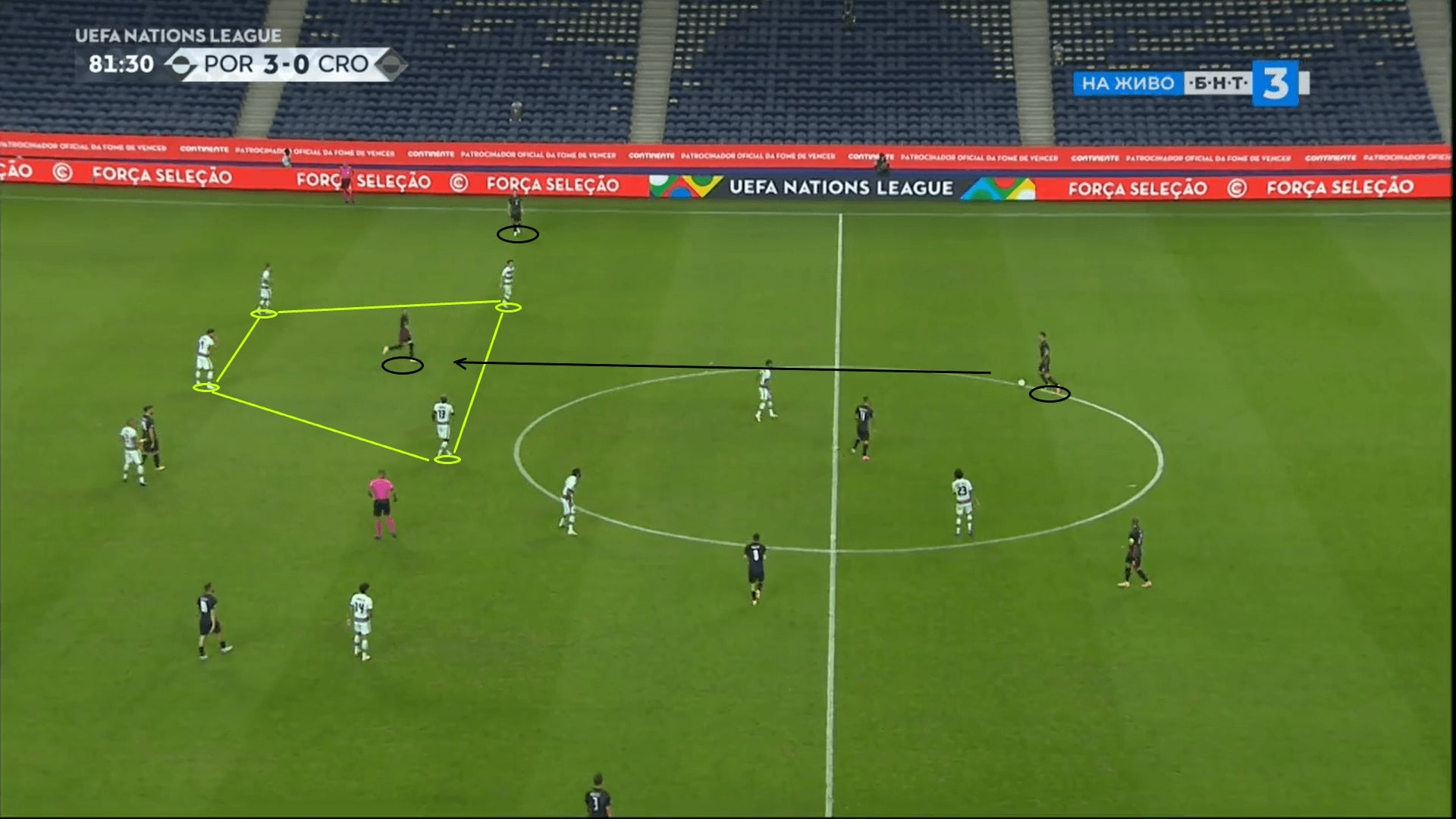 Even in the counter-attacks, Croatia were attacking the box with some crosses. A lot of the crosses were travelling to the far side, with one dynamic runner on the blindside of the last defender. However, the Portuguese players switched on that night and seldom allowed a free header.

With an xG of 2.72 that totally outplayed Croatia’s 0.59, Portgual deserved the victory. Even without Ronaldo on the pitch, the team was attacking sharply with different methods to demolish the opponent. Their next opponent are Sweden as the second game of the competition.

Croatia did not show the intensity and level that matched the opponent today, despite possessing quality players in the lineup. This must not be the standard that Dalić expected to see and they will have to improve in the next game.