Cercle Brugge have been one of the surprise sides in this year’s Belgian Pro League. Under former EFL manager Paul Clement, Cercle have improved considerably since last season, in part thanks to some smart signings. One of these was Franck Kanoute from Cosenza Calcio in the Italian second tier.

The 21-year-old Senegalese midfielder has been impressive in his seven games so far this season, filling a defensive midfield gap. This tactical analysis, in the form of a scout report, will look at the strengths and weaknesses of the young midfielder. The analysis will also look at how he operates within the tactics Clement deploys.

When we look at the data for Cercle, especially over the last five matches, we see that it is Kanoute who has recovered the ball the most times, with 35 recoveries overall. The midfielder is averaging 9.06 recoveries per 90, putting him in the top 20 for the league. He is also averaging 4.34 counter-pressing recoveries per 90, which is similar to Marco Ilaimaharitra of Charleroi, who has a similar role to Kanoute in that he is the ball-winning midfielder for the side.

In the recoveries map below, we see that Kanoute is rarely having to commit to a slide tackle in order to win the ball back; in fact, we only see one on the graphic. Instead, he uses his positioning and ability to intercept the ball. This suggests he has a high level of footballing intelligence, while also being comfortable in defending all over the pitch. Most of his recoveries this season have come in the central third, an area that Cercle needed to improve on. 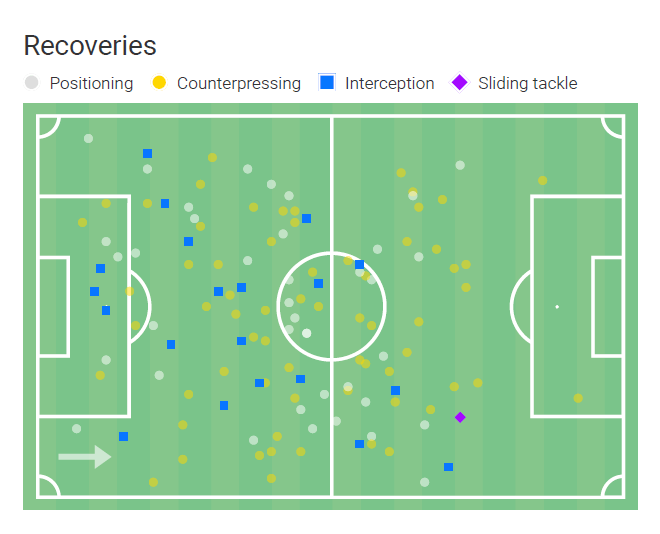 What aids Kanoute is his athleticism. Standing at 186cm tall, he has the body size, along with a good eye for danger and speed of thought to cover. We see this in the game against KAA Gent, where Kanoute, highlighted, is behind the attacking player, who has plenty of space to run into. Kanoute is clearly aware of the danger but is still some way off the player when the ball is played. 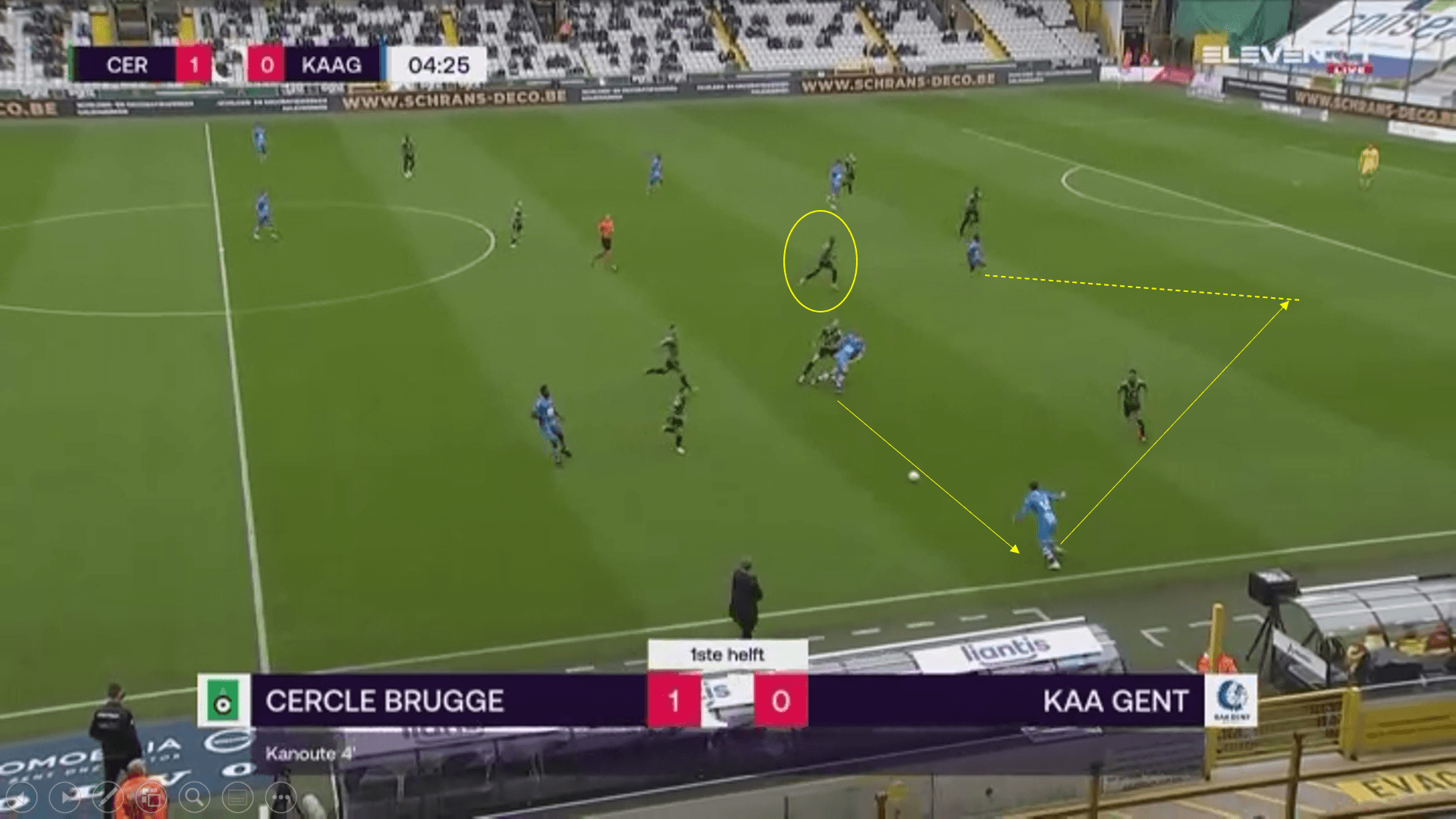 However, Kanoute is quick enough to catch up. In the next image, we see that he is, perhaps somewhat dangerously, showing the attacker towards the goal, rather than forcing him to cut back. Yet, this actually appears part of the plan for the midfielder, in that he wants to force the player into making a decision, moving into an area whereby he can use his physical advantages to win the ball back. 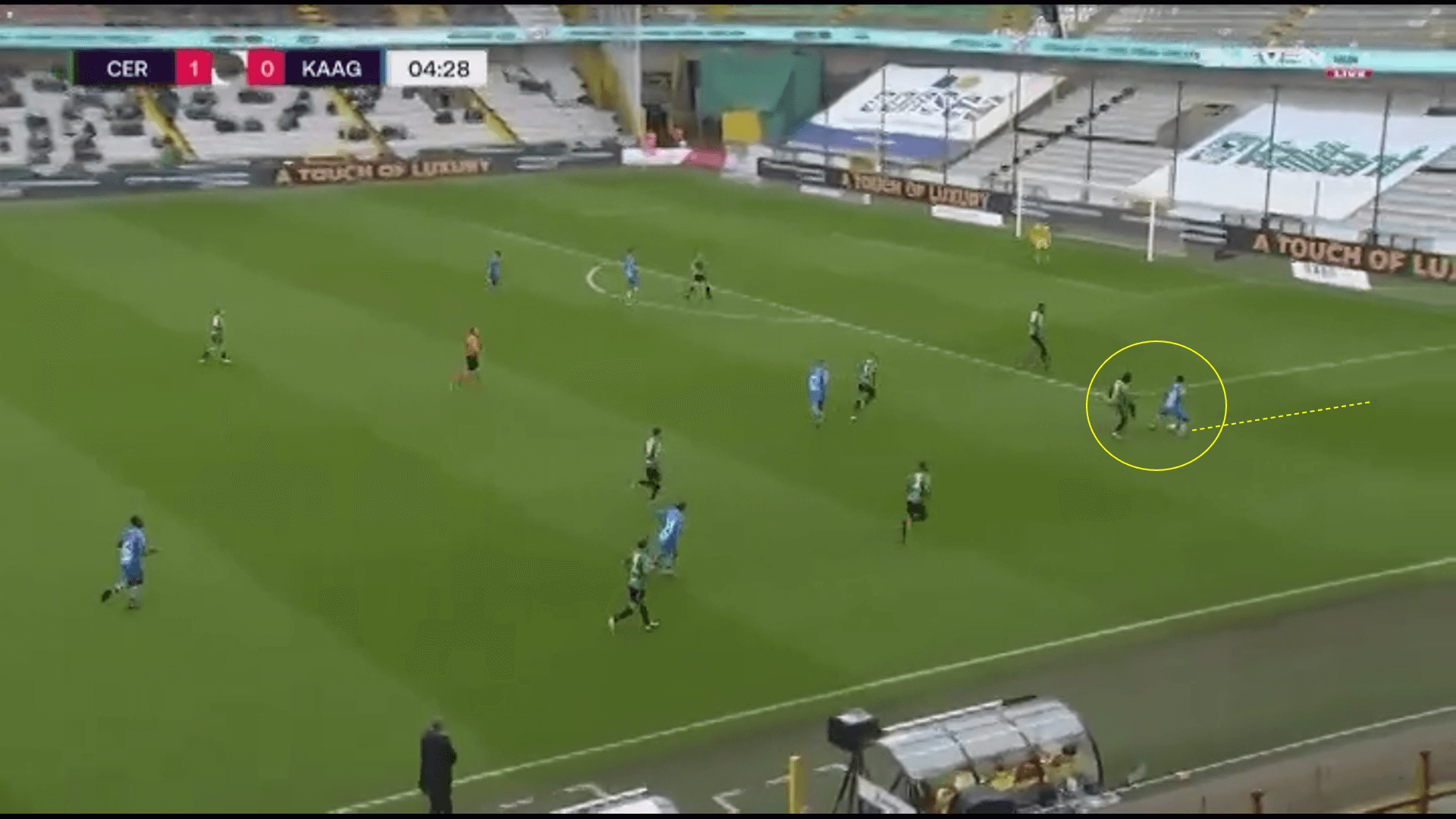 This is now evident in the final image below. Kanoute has managed to get shoulder-to-shoulder with Osman Bukari, who is no match for the strength of the midfielder. Kanoute is able to win the ball back. This short clip highlighted not only the strength of Kanoute but also his speed in catching up with the attacking player. Bukari possesses a fair amount of pace, yet Kanoute was able to match it and then complete the recovery. He also showed control of the situation by trying to force the opponent into doing what he wanted them to do in order to win the ball back. 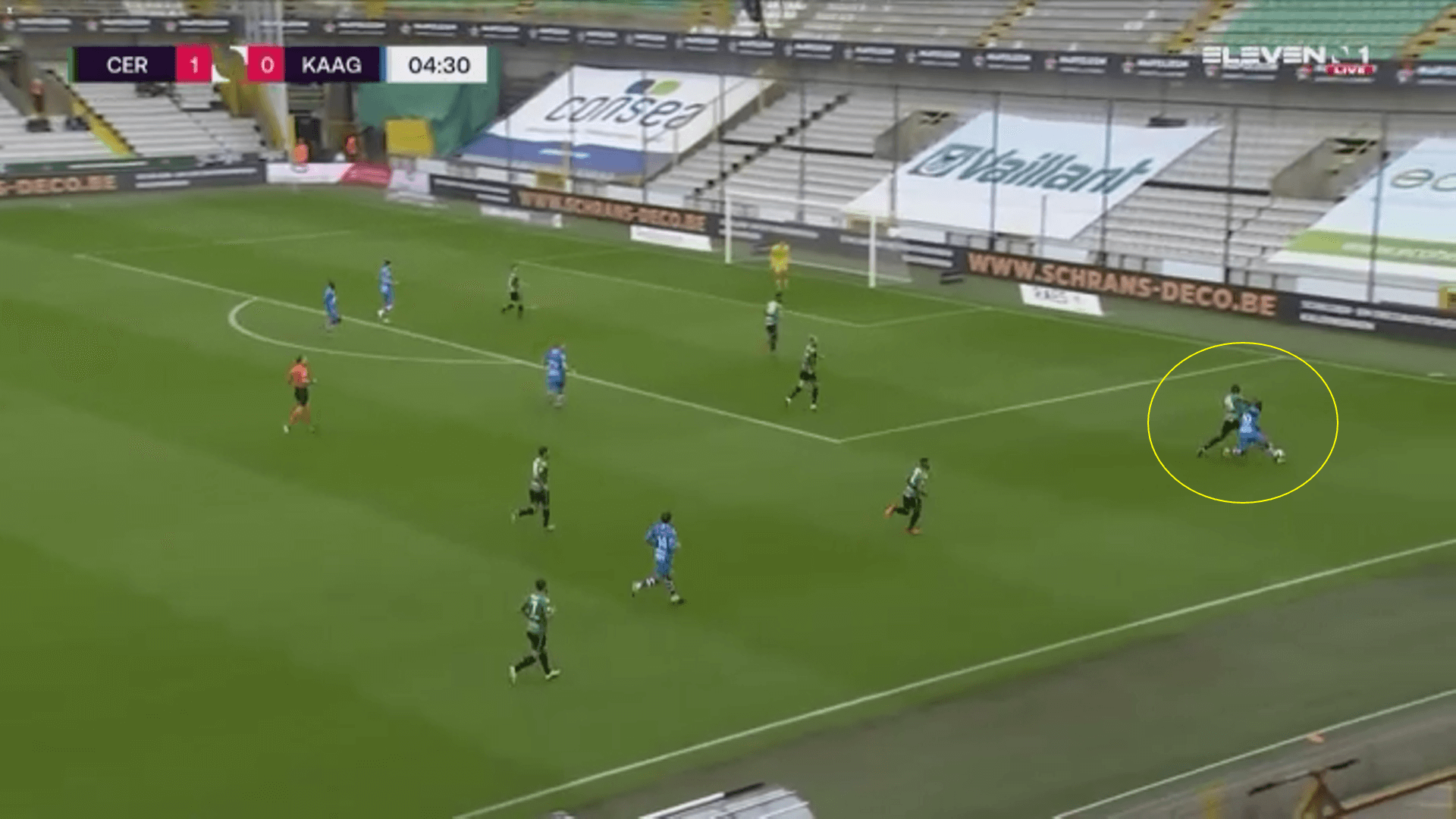 Kanoute is far more than just a ball-winning midfielder there to recover the ball. He is also technically sound and a decent dribbler with the ball. According to Wyscout, he has attempted 47 dribbles so far this season, succeeding in retaining possession 41 times at a rate of 87.2%; both are very impressive numbers. He has 100% against other central midfielders with 11 attempts, but, against fellow defensive midfielders, this drops down to 76.9%. This suggests that, after he has won the ball back, he is more than capable of escaping a situation or a counter press and retaining possession for his team.

Let’s take an example from the derby match against Club Brugge (from now referred to as Brugge), arguably the best side in the league and the current reigning champions. Brugge are the second-most successful team when recovering the ball, and the third highest when it comes to pressing. This hopefully puts the below passage of play into context, where we see that Kanoute has won the ball back from a clearance by the Brugge defenders. He is deep into the opposition half and surrounded by blue shirts. 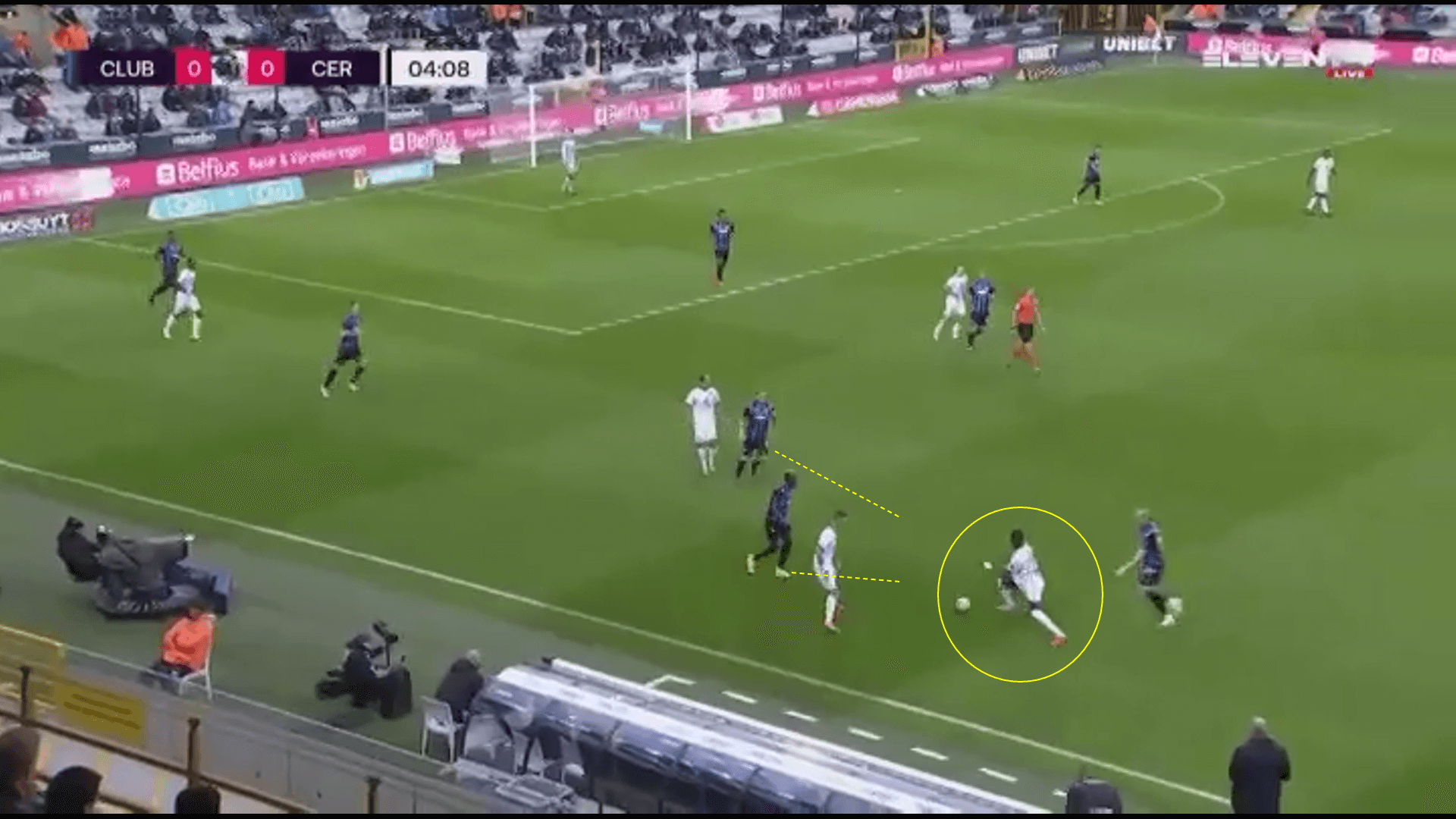 As Brugge usually do, they look to press the player in possession and have put Kanoute under a lot of pressure. However, here he shows off his technical ability as a dribbler. He has excellent body control and is able to fake right, putting the opposing player off balance before going back to his left. We see he has opened a passing opportunity ahead, thanks to this bit of skill. 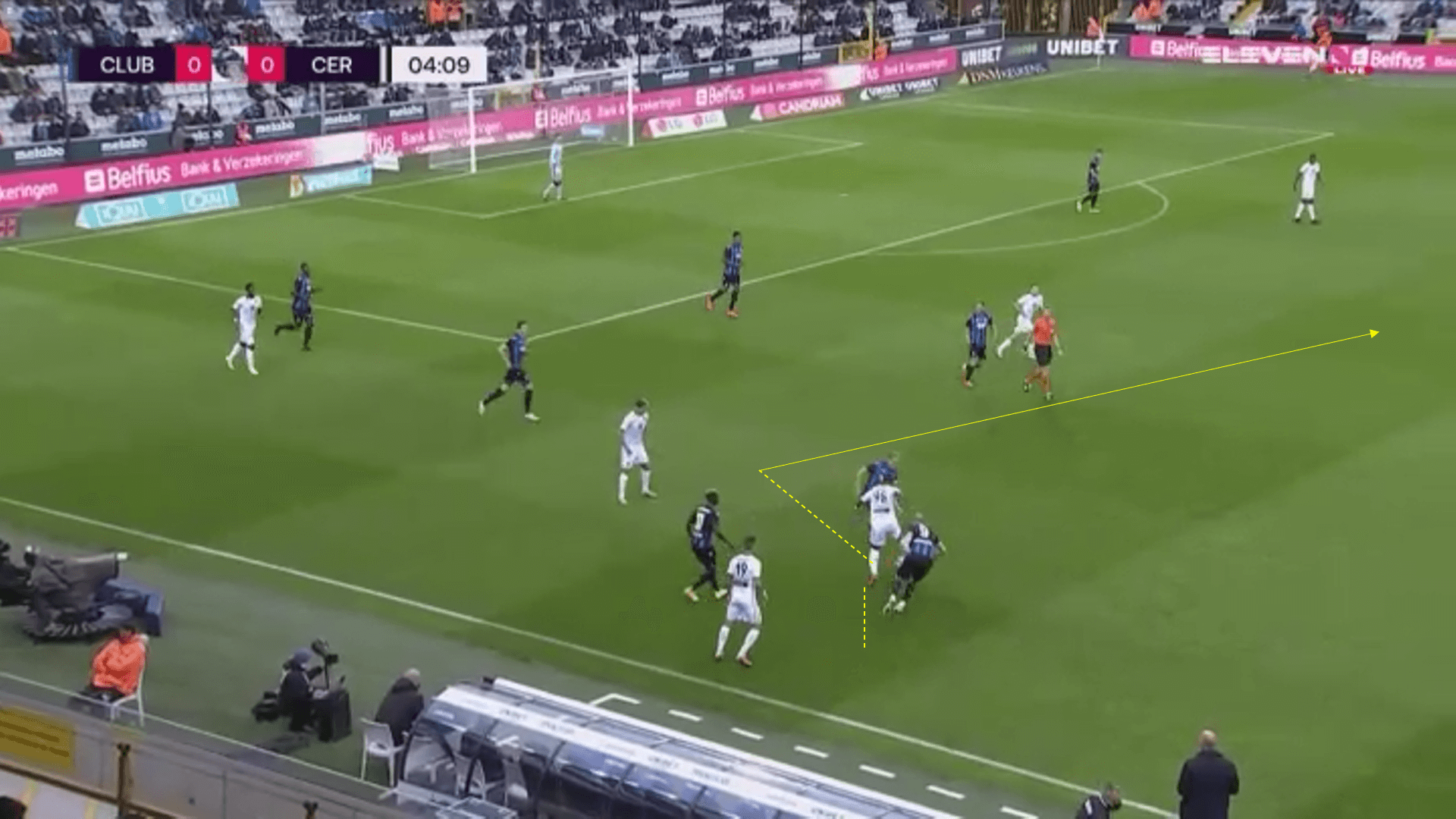 However, his decision-making in this situation does let him down, as, after a great piece of work to escape the press, a misplaced vertical pass is intercepted. He would know looking back that, as soon as he opened up the space, he should have released the ball to the player open in the image above. This was a feature of his dribbling during the game against Brugge, whereby he would escape pressure, but the pass would then let him down. Being a young player, this is likely to improve over time as he gains experience against teams with the calibre of Brugge. He is by no means a poor passer of the football though, as we shall explore in the next section.

One area of interest when analysing a central midfielder is how well they pass the ball. While he does not rank highly among midfielders for his passing, the data is still respectable, and, when we consider the tactical role that Kanoute has in the Cercle side, it is understandable that he only averages 33.77 passes per 90. He is not the primary playmaker for Clement’s team, yet he still has an impressive 83.8% success rate.

When we break down his passing range, we see that he averages only 3.21 progressive passes per 90, reiterating the point that the young Senegalese midfielder is not the primary player for building attacks. Yet, his progression average of 147.37 does suggest he is capable of playing longer balls to help the team transition from defence to attack. When we look at the graphic for ball progression, we see that he rarely uses running, instead looking to play passes. 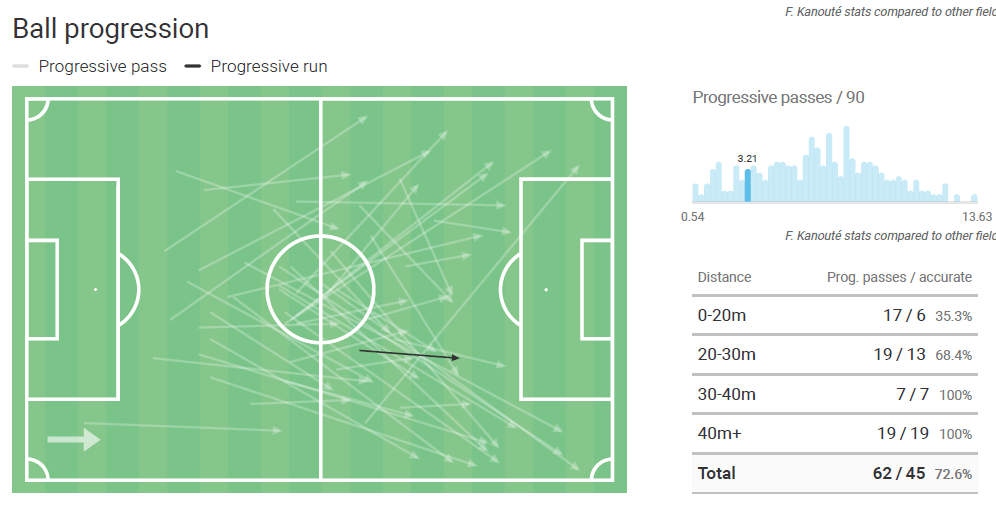 What is most impressive is that Kanoute has attempted, according to Wyscout data, 19 progressive passes over 40 metres, of which 100% have been successful. When we then go to the 30-40m range, he has attempted seven and completed all of them. Obviously, the data does not show pressure from other players in these passing situations, but these are still impressive stats that shouldn’t be overlooked, suggesting that he is a highly accurate long range passer of the football.

Tactically, when we look deeper into who he is passing to, we see that over the past five games, he has been predominantly targeting the more creative players, such as wingers and strikers. For example, Antony Musaba, the winger, and Ike Ugbo, the striker, have both received the majority of his passes over the past games, with four apiece. Kevin Hoggas is the other recipient of four, and he is one of the two central midfielders usually deployed in front of Kanoute. This again highlights how the midfielder’s role is to win the ball back and then get it to the more creative players.

At only 21 years of age, Kanoute is certainly an exciting prospect as a central midfielder who can pass the ball across long distances with accuracy.

Despite only a seven game sample size in the league so far this season, it is clear that Kanoute looks to be an exciting prospect. There is no guarantee that a player will continue to develop, but, if the young Senegalese midfielder does manage to push on, it won’t be surprising to see him being linked to bigger clubs and leagues in the tier above.

Cercle will be hoping they can keep hold of him for a few seasons at least, however, with their link to Ligue 1 side AS Monaco, it might well be that we see him make the move from Belgium to the principality in a few seasons.