Emiliano Martinez’s 2019/20 campaign was one of the stories of the season. After eight years and six loans, Martínez finally got a run in the Arsenal first-team. After Bernd Leno got injured, Martínez had finally earned his place. And by the end of the season, fans were even beginning to question whether Leno was better than Martínez. After his astonishing season, the Argentinian earned himself a move to Aston Villa in a deal worth almost £20million.

This tactical analysis will look at why Martínez was such a wanted keeper by the end of the 2019/20 season and how he could fit into Aston Villa’s tactics. We will analyse his shot-stopping, sweeping ability and passing to evaluate why he is such a strong goalkeeper. We will also compare him to Leno to see if Arsenal made the correct decision in selling Martínez.

How does Martínez rank amongst Premier League keepers?

PS xG +/- per 90 is a good stat to analyse how many goals goalkeepers have saved above what they were expected to. Martínez saved 3.9 more goals above expected last season, but given his limited game time, he has the best per 90 stat is the whole of the Premier League. The 28-year-old saved 0.46 goals above expected per 90.

The below graph uses this stat along with the shot difficulty that he faced, calculated through PS xG per shot on target. 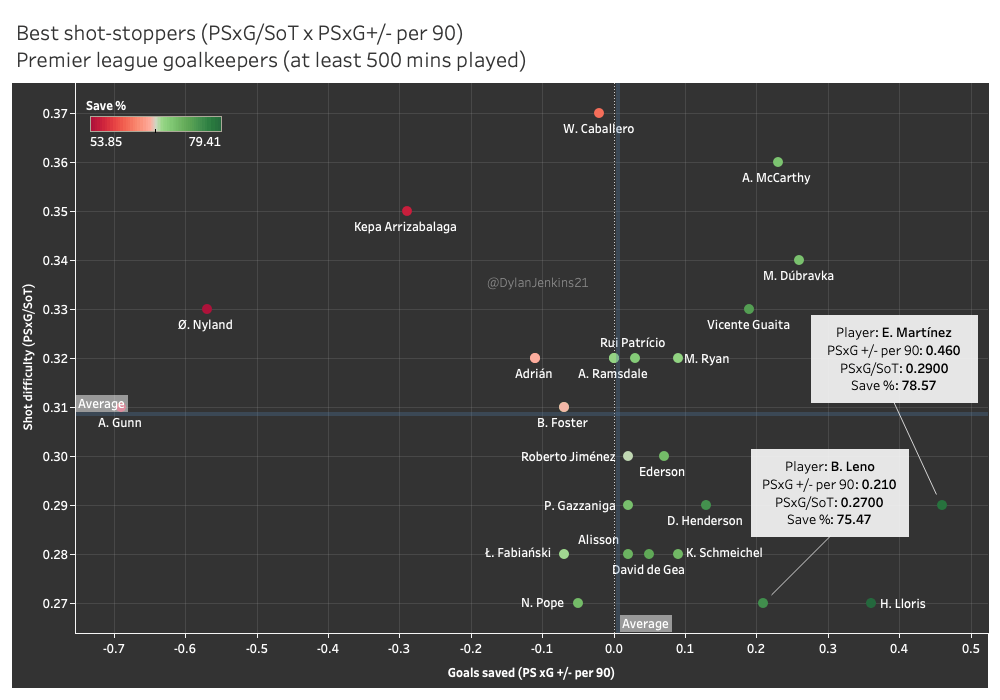 As we can see, Martínez ranks incredibly well in terms of shot-stopping. Although he doesn’t face an above-average shot difficulty, he has the highest PS xG +/- per 90 value. Tottenham’s Hugo Lloris is the only player that comes close. 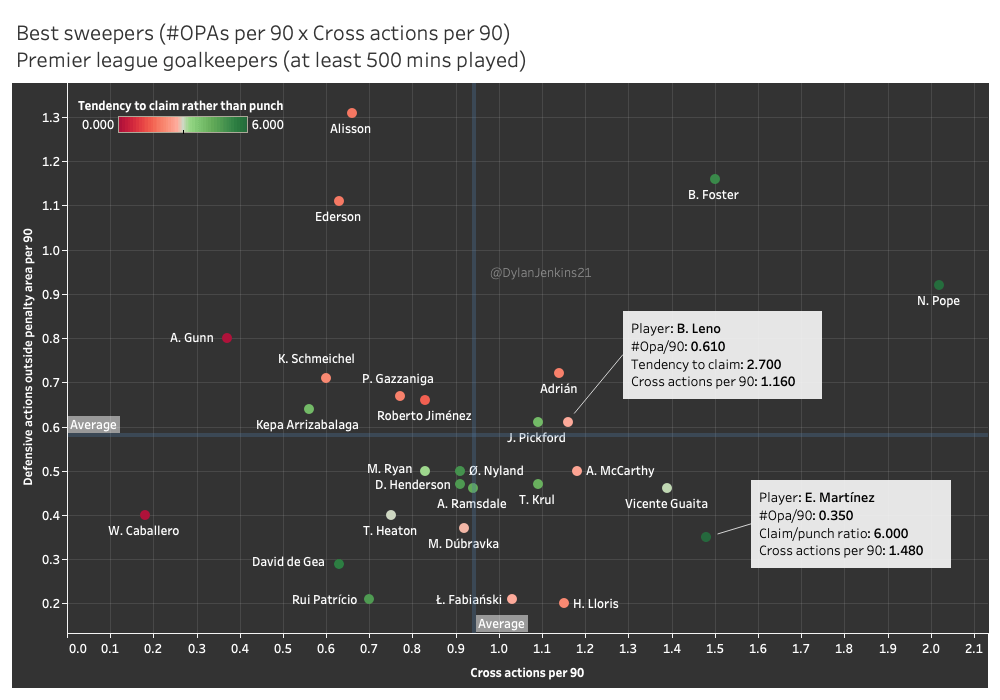 The above graph looks at each goalkeeper’s defensive actions outside the penalty area and their cross actions per 90. Cross actions include punches and claims.

It’s a mixed graph for Martínez. He has the third most cross actions per 90 with 1.48 but has below-average OPAs per 90 with just 0.35. What this tells us is that Martínez is comfortable coming off his line if he is intercepting the ball within his box, but not so confident leaving his box. 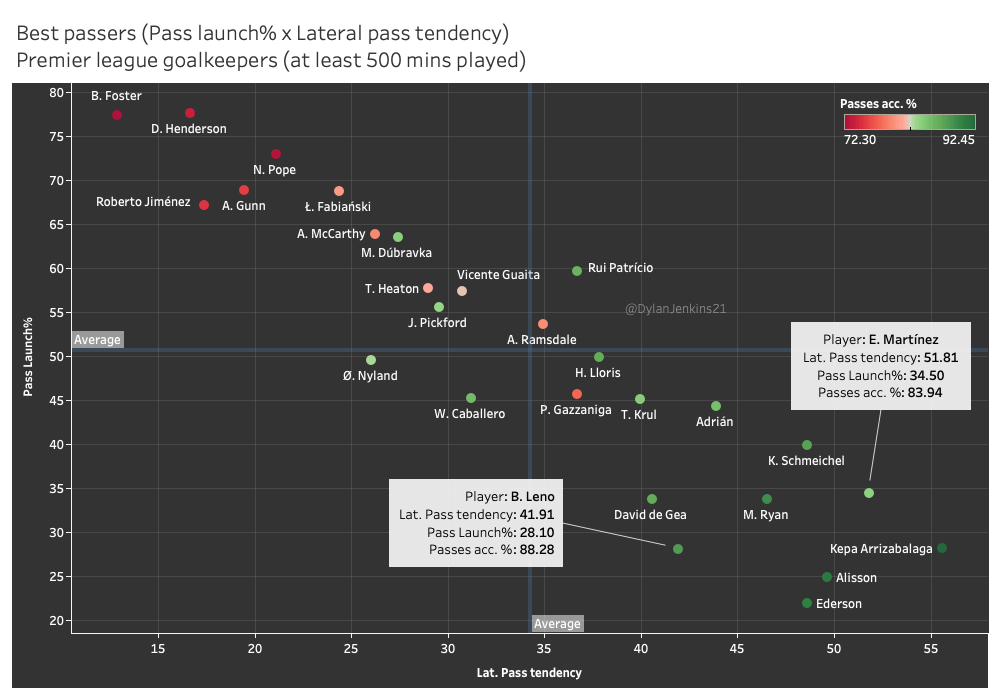 This graph looks at each goalkeeper’s passing tendencies. This is often reflected by their team’s tactics. Therefore, with Martínez at Arsenal last season, his passing stats are very good. He has below-average pass launch % and lateral pass tendency. We can pinpoint Aston Villa’s goalkeepers, Tom Heaton and Ørjan Nyland, on the graph and see how much better Martínez’s passing abilities are.

A passing style to suit Villa

During the 2019/20 season, Martínez made 20.46 passes per 90, 83.94% of these accurate. The 28-year-old has the second-highest lateral pass tendency in the Premier League, second to Chelsea’s Kepa. Aston Villa’s playstyle does differ a lot from Arsenal’s. Arsenal made the sixth-most passes per 90 last season, whereas Aston Villa were ranked 18th. Aston Villa did prefer a more direct approach, this means that Martínez will have to get used to kicking the ball long, but his great passing ability means that he will easily be able to adjust.

Martínez has one of the worst long pass accuracies in the league with just 53.7%. However, only 27.78% of his long passes were followed by an aerial duel, one of the lowest in the league. The latter stat bodes well for the Argentinian, in a team that makes more direct passes, his long passing will improve.

Martínez is very good at the chipped pass technique. This helps him pick out wingers and full-backs that are in space. It has enough height and pace to reach the intended target. In the above example, we can see how he positions his head over the ball to give the ball more dip. When a goalkeeper takes a goal-kick, he leans back to get more lift and backspin on the ball. The chipped pass technique is the total opposite.

As well as his good passing he has equally good footwork. This is beneficial for moving the ball into a position to find a good pass, and also with his shot-stopping.

In this example, against Manchester City, he beats Gabriel Jesus and subsequently finds a great pass that wasn’t available in the first instance. In the first image, we can see that Jesus’ pressure means that there are no short passes available. He beats Jesus and finds a pass to Granit Xhaka who is then able to build from the back.

Effective sweeping, up until the edge of his box

Martínez is one of the most effective when it comes to dealing with crosses into his box. He’s won 100% of his aerial duels and has 1.91 actions per cross against – the highest in the Premier League. His 6’5 height means that he can easily claim crosses, rather than punching.

In this example, we can see how his height prevents the opposition from getting a clear sight at goal. If Martínez doesn’t intercept this ball then the attacker will get his head to the ball. Goalkeepers who can come off their line and claim balls is a huge bonus for a team’s defence to relief pressure.

As well as his ability to claim high, dangerous balls, he is also very adept at intercepting the ball in other ways. 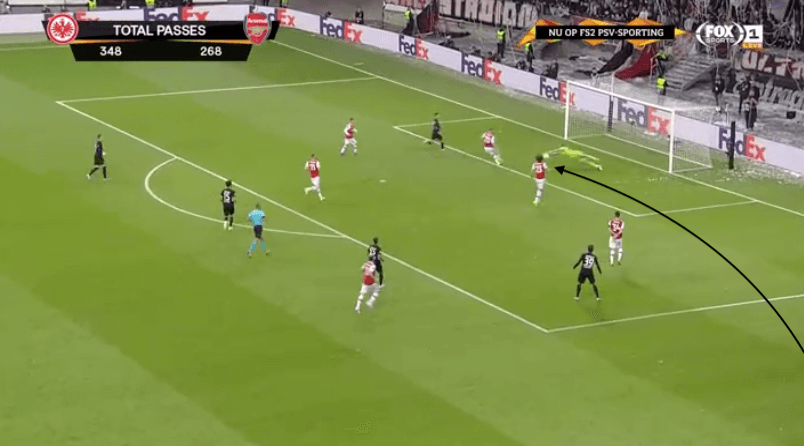 After a dangerous cross comes into his six-yard box and being destined for an unmarked player at the back post, Martínez knows he needs to intercept. He reads the danger well and gets down low to prevent the cross from reaching the opposition. His actions here directly prevent a goal, showing the importance of this.

However, it appears that the Argentinian isn’t as comfortable coming off his line to deal with balls outside his box. The top stat to measure a goalkeeper’s sweeping ability is their defensive actions outside of their penalty area. 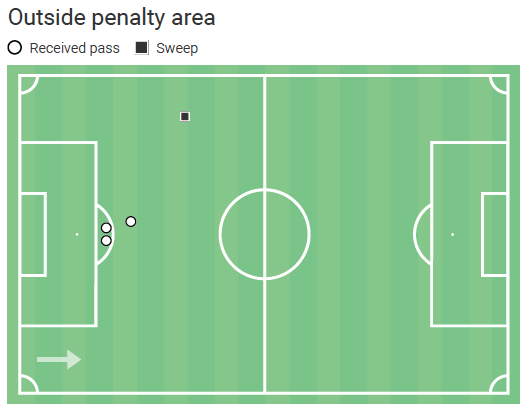 As we can see from the above map, Martínez does not often contribute to his team whilst outside of his box. He’s only received the ball three times and made one sweep whilst outside of his box. At a team like Aston Villa, where they don’t particularly play a high line, this won’t be too much of a problem. However, this is a valuable skill for the modern-day keeper to possess.

As previously mentioned, Martínez has prevented the most goals above what he was expected to per 90, meaning he’s been one of the best shot-stoppers in the league. He has a save percentage of 78.57%, the second-highest in the league. This is mainly down to his good reach and reflexes.

Against Liverpool, Martínez pulled off one of the saves of the season from Trent Alexander-Arnold. In a crucial stage of the match, Liverpool’s right-back lined up a shot from outside the box, it takes a slight deflection and begins heading to the right side of the goal. Martínez uses his reflexes to dive to his left, making the save with his fingertips, as seen in the second image. This is a great example of how the 28-year-old uses his reach and reflexes to win a match for his team.

As well as his ability to stop shots from distance, his one-on-one technique is also very effective.

Being calm during one-on-one situations is extremely important for goalkeepers. It allows them to make the correct decision and the optimal decision to prevent a goal. In the above example, Martínez faces a direct confrontation with Danny Welbeck. Instead of rushing out of his goal and making a rash decision, Martínez decides to stay close to his line and composes himself. This allows his teammates to apply more pressure to Welbeck and allows the keeper more time to react. As Welbeck strikes the ball, the Argentinian spreads himself to prevent the goal.

Did Arsenal make the right choice?

This analysis has shown why Martínez had such a good season, but how does he compare to Leno? After Martínez’s incredible run of games, many pundits and fans were debating over whether he was actually better than Leno. However, many had forgotten how good Leno was behind an arguably worse defence. Below we will compare both of them, looking at the three main goalkeeping areas. 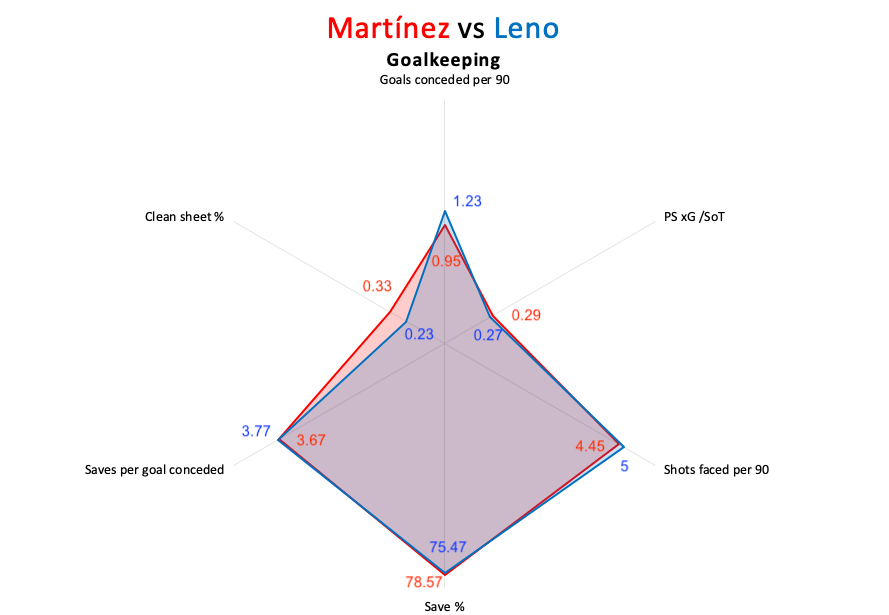 Though both goalkeepers played for Arsenal, the team’s defence improved massively throughout the season. This meant that Martínez was playing behind a much more settled defensive line. Although Martínez conceded fewer goals per 90 and faced harder shots, Leno faced 0.55 more shots per 90. Leno tops the Argentinian in saves per goal, meaning he makes more saves before conceding a goal. 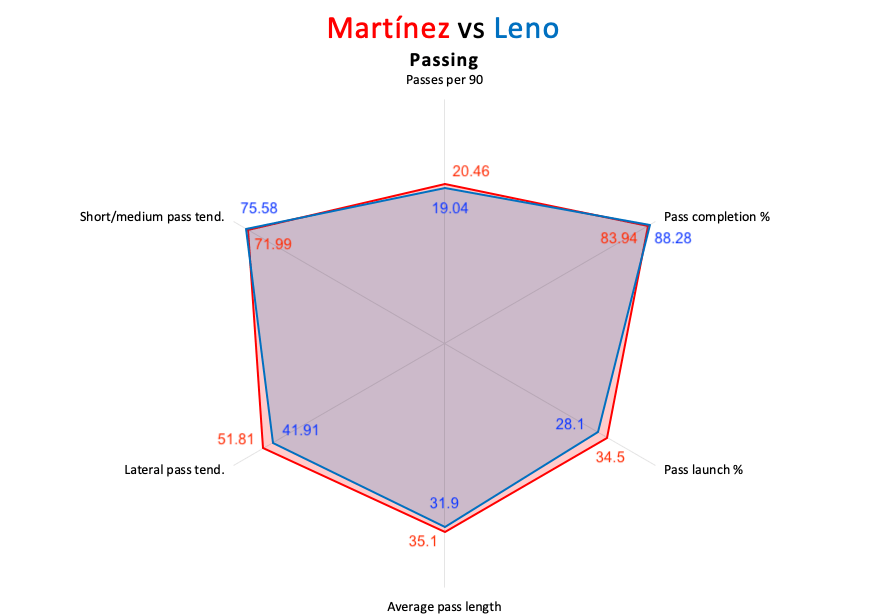 From the graph above, we can see that Leno is the best passer, and has the best passing tactics to suit Arsenal. Martínez is more likely to launch his passes long rather than play out from the back, this will suit Aston Villa more than it would Arsenal. Leno has a much higher pass accuracy and short/medium pass tendencies. 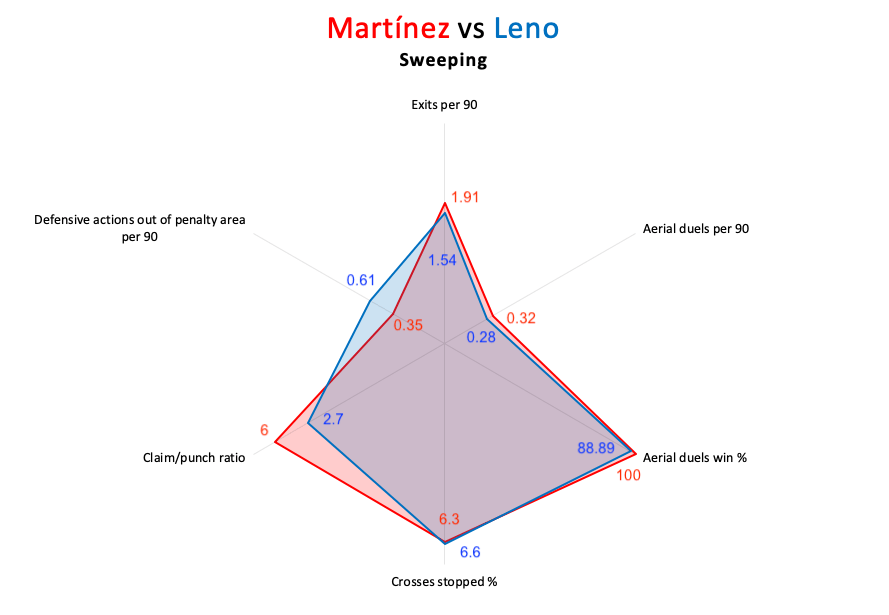 Martínez and Leno have fairly similar sweeping tendencies. Martínez has more exits and aerial duels per 90 and he has also won 100% of aerial duels he’s been involved in. Although Leno has stopped a higher percentage of crosses, however, Martínez is much more likely to claim rather than punch when it comes to stopping crosses.

This scout report has shown why Martínez was in such good form last season, earning his move to Aton Villa, where he will be the first-choice goalie. The Argentinian, who is now in his peak, will see his shot-stopping and sweeping abilities help his team massively in the season to come. However, when comparing him to Arsenal’s Leno, it would appear that the Gunners made the correct decision in allowing Martínez to leave, as Leno has been a much better, and more consistent performer over previous seasons.