Goalkeepers have become increasingly vital to the way a football team plays. We’ve seen this with Manchester City keeper Ederson and how comfortable he is with the ball at his feet. We’ve also recently seen David de Gea struggle to play out from the back for Erik ten Hag’s Manchester United. However, first and foremost, a goalkeeper’s job is to keep the ball out of his net. This season has begged the question, are teams prioritising a goalkeeper’s passing ability over their actual goalkeeping abilities?

In this data analysis, we will be looking at the statistics of each Premier League goalkeeper to determine if they have been reliant on their team’s defence. We will be analysing the first-choice goalkeepers from each team, focusing on their goalkeeping, passing and sweeping. These categories will give us a well-rounded analysis.

Who are the best shot-stoppers?

A goalkeeper’s data can often look good because he is situated behind a strong defensive unit. Therefore, it’s important to consider this when analysing a goalkeeper. Goalkeepers for worse teams face more shots, meaning they are more likely to concede. This first graph will take into consideration the number of shots each team faces.

The below graph looks at the number of shots that each goalkeeper faces per 90, and how often they save these shots. 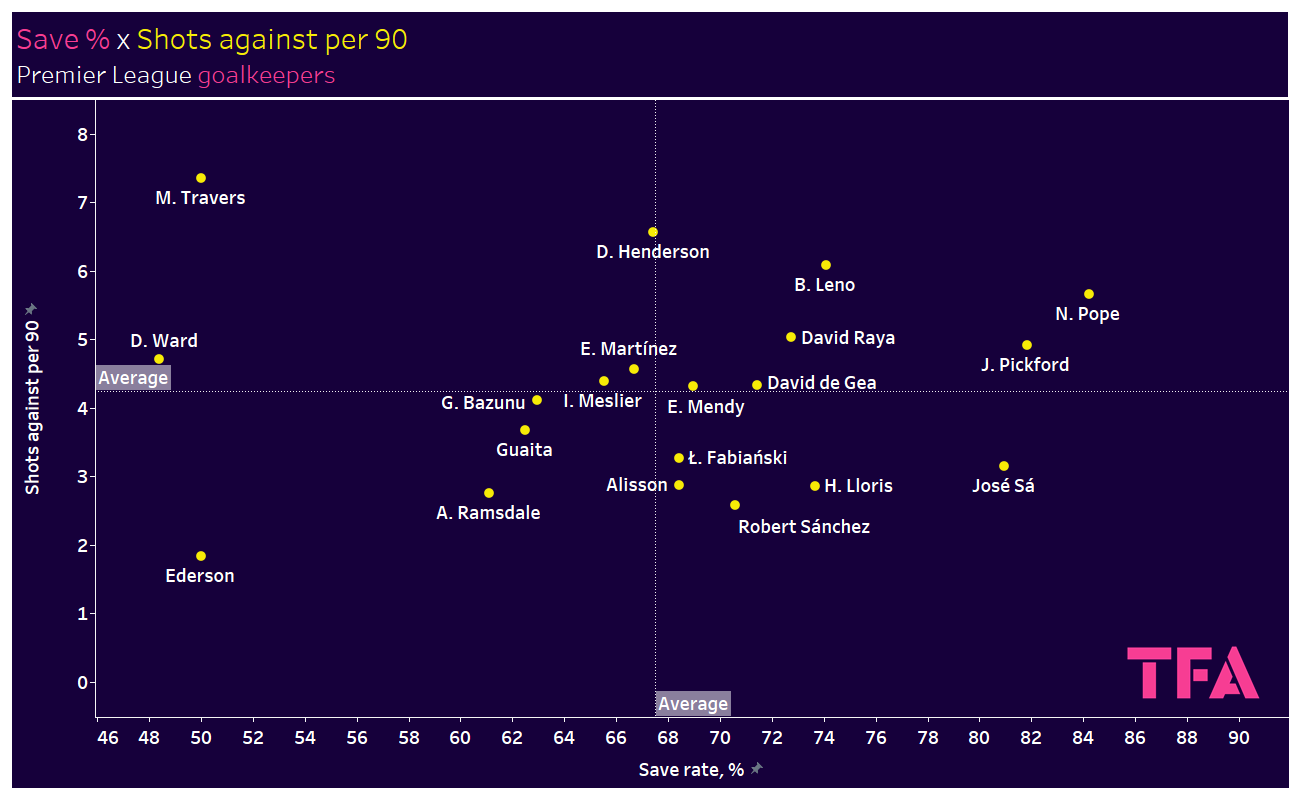 The best goalkeepers here are the ones in the top right quadrant. These players have faced an above-average amount of shots per 90, whilst also having a save percentage of over 67.5%.

Instantly, we can see that Newcastle’s Nick Pope stands out from the crowd. Pope faces the fourth-most shots per 90 with 5.66 and he has an incredible 84.21 save percentage. Pope has been one of the most consistent goalkeepers over the past few seasons.

Another England man has the second-best save percentage with 81.82%. Even if Everton have started the season fairly averagely, Jordan Pickford has emerged as one of the best goalkeepers this season, facing an above-average 4.91 shots per 90.

The last player that stands out (for positive reasons) is Wolves’ José Sá. Since joining the Midlands club, Sá has gone under the raider somewhat. Although he only faces 3.15 shots per 90, he saves 80.95% of them, which is surprising considering Wolves’ bad start to the season.

Danny Ward and Mark Travers have both endured difficult starts to the season, with both keepers suffering as a result of their team’s poor defence. However, the biggest shock on this graph is Ederson. The Brazilian faces a league-low 1.84 shots per 90 but has the joint second-worst save percentage with 50%. Has Ederson been hiding behind his defence?

This next graph looks at more advanced data, goals prevented per 90 against PSxG /SoT, which translates to the difficulty of the shots they face. 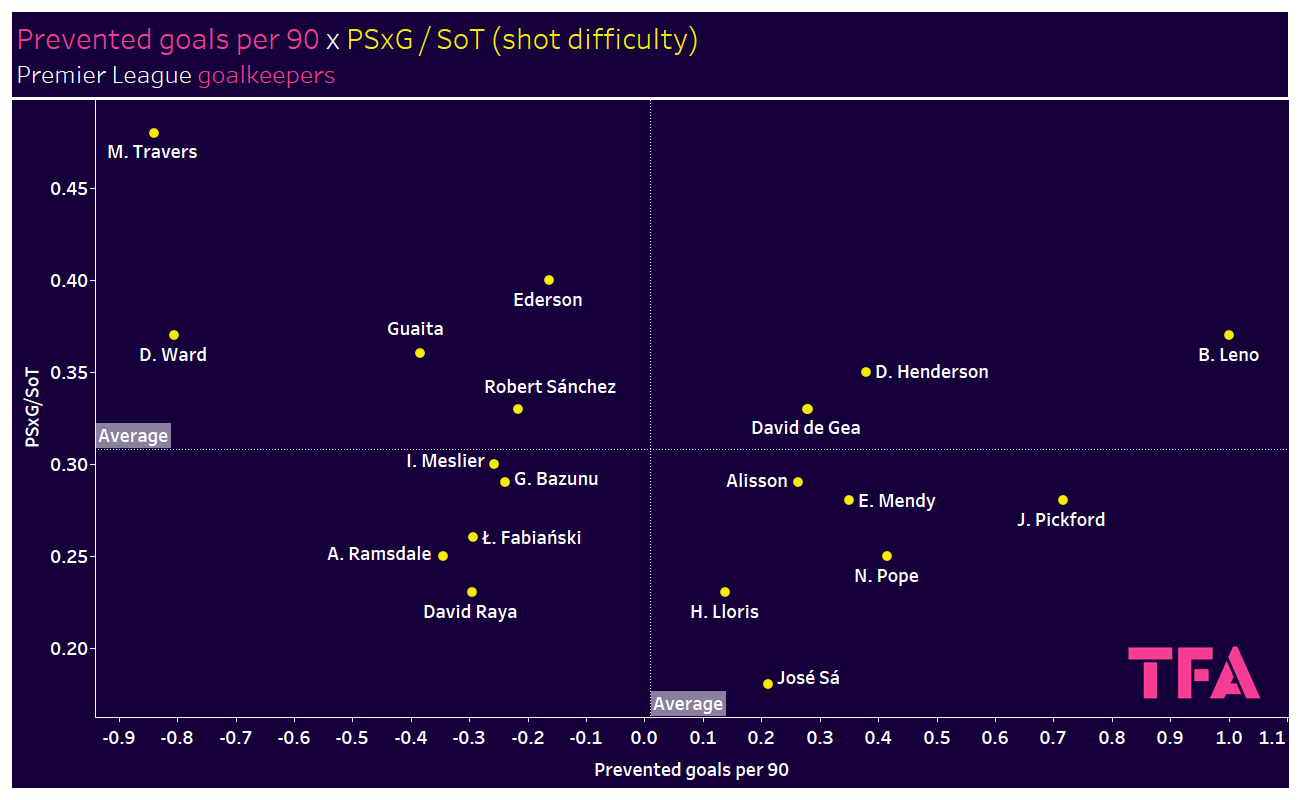 Once again, players in the top right quadrant in this graph are the most impressive. It means they have prevented the most goals, but also faced the more difficult shots.

Bernd Leno has prevented the most goals this season so far with 1 per 90, very impressive. As expected, playing for a newly promoted team, the German has faced fairly difficult shots (0.37). Leno spent the majority of last season being second-choice at Arsenal, but he’s proving to be a great acquisition for Fulham.

Despite his critics, David de Gea has had a pretty great start to the season. The Spaniard has faced fairly difficult shots and has prevented 0.28 goals per 90. However, Dean Henderson, who was looking to overtake de Gea as Manchester United’s starting goalkeeper, boasts better stats than his former teammate. 0.35 shot difficulty, with 0.38 goals prevented per 90

This next section will look at each goalkeeper’s sweeping abilities. A goalkeeper’s ability to come off their line to diffuse dangerous situations has become more and more important in recent years, especially if their defence is playing a high line. 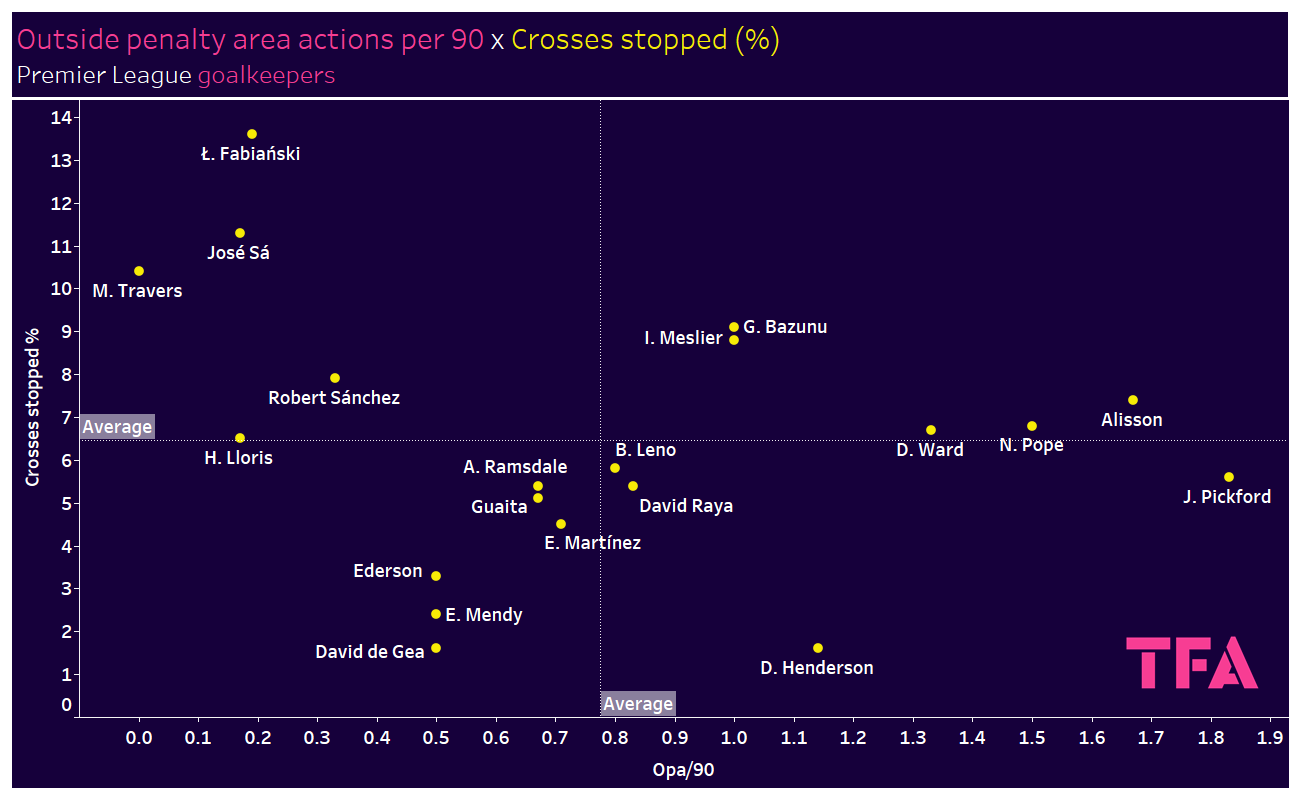 West Ham’s Fabiański has stopped the most crosses this season, with a strong 13.6%. However, the veteran goalkeeper has one of the lowest outside penalty area actions per 90 (0.19).

Pope has been one of the most prolific sweeper-keepers in recent seasons, and that appears to be continuing. The new Newcastle man has 1.5 outside of the penalty area actions per 90, with 6.8% crosses stopped.

Leicester’s Ward hasn’t had the best start to the season; however, he is one of the best in the league in terms of sweeping. The two youngest goalkeepers in the league, Ilan Meslier and Gavin Bazunu both impress here too. They both have stats that are above the league average.

A goalkeeper’s passing is vital to the way his team play nowadays. More possession-based teams require a goalkeeper who is good with the ball at his feet and has the confidence to play out from the back. The next graph will look at who the best passers are in the league. 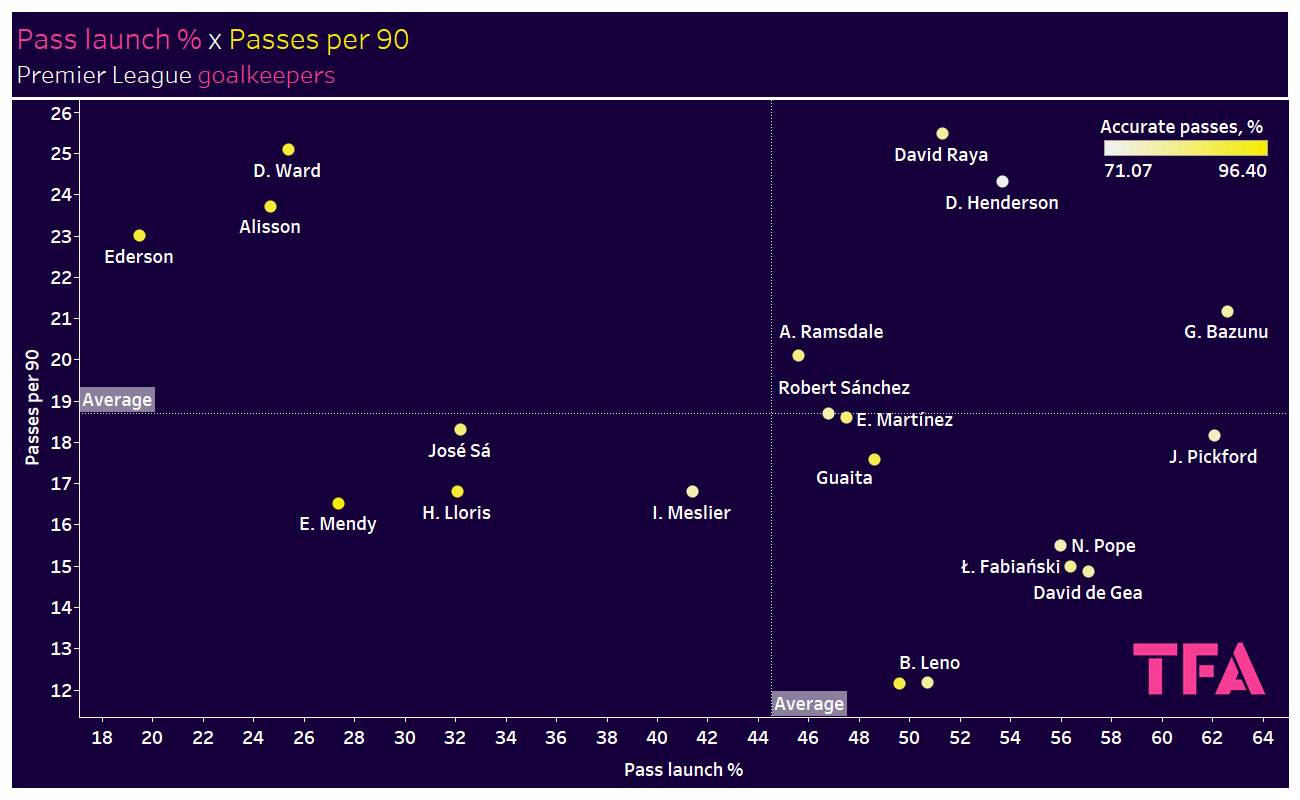 As expected, the two Brazilians, Alisson and Ederson stand out as the best passers in the league. Ederson makes 23 passes per 90, launching just 19.5% of them. Whilst Alisson makes more passes per 90 with 23.71, he launches slightly more of these (24.7%). These statistics show how vital both of these goalkeepers are to the way their teams play.

However, a surprise here is Ward. The Welshman has been instrumental to the way his team have played this season, even if they do find themselves bottom of the table. Ward’s passing ability appears to be a lot better than his actual goalkeeping ability. He makes the second-most passes per 90 in the league with 25.1, launching just 25.4% of these.

Brentford’s David Raya makes the most passes per 90 with 25.47, however, his passing style appears to be very varied, launching just over half of these (51.30%). Nottingham Forest’s Dean Henderson has similar stats.

Pickford and Bazunu have the highest pass launch percentages with 62.1% and 62.6% respectively. This means that their teams often opt to go long rather than play it from the back.

Ederson – Manchester City’s Ederson has been accused of hiding behind a very solid defence and his incredible passing ability. His data here appears to back this up. This season, he has conceded more goals than he was expected to, with -0.163 prevented goals, however, he has faced some of the most difficult shots in the league.

Nick Pope – The ex-Burnley man boasts the highest save percentage in the league this season. He has been one of the most consistently good goalkeepers over the past few seasons. His height means that he’s very adept at stopping crosses, and his sweeping stats have been very impressive recently. He’s clearly settled into his new team and has hit the ground running.

Jordan Pickford – Pickford has been one of the most improved goalkeepers in recent years. And he has arguably been one of the most valuable players this season, with an incredible performance against Liverpool. His sweeping ability has been highlighted in this piece, as well as his suspect passing ability. It would be beneficial to analyse his performances in more depth.

This season, Ederson has a save rate of just 50%, with Alisson having slightly better at 68.42%. However, both these goalkeepers have very similar passing styles and are vital to how their team progress up the pitch. With Liverpool’s defence looking more suspect than last year, Alisson has clearly struggled more than usual.

Ederson has come under scrutiny in the past season for relying on his defence, and it would appear that this is still the case. The goalkeepers who have the best save percentage; Pope, Pickford and Sá, are not reliant on their team’s defence.

Concentration is key for a goalkeeper, and it seems as though the better teams’ goalkeepers are struggling with this.