Borussia Monchengladbach are currently in the first position in the Bundesliga under their new coach Marco Rose. The Fohlen collected a solid 25 points in their first 11 matches and are four points ahead of RB Leipzig, Bayern Munich, and SC Freiburg. Since the seventh matchday, they sit in the first position of the highest league in Germany.

One of the most important players of the team is surely Denis Zakaria. Even though he just scored two goals and assisted once in the first eleven league games, his value gets visible in other aspects of the game. In this tactical analysis, we’ll look at Zakaria’s role in Rose’s system and examine his abilities on the pitch.

Rose used different systems and formations in this season while the tactics mostly stayed the same. They want to build up their attacks from the back with short passes and for that, Zakaria is one of the most important players as we’ll see in this analysis. Gladbach mostly played with a back four in this season, but in some games, they had a double pivot in front of it when they used, for example, a 4-2-3-1 formation. In other matches, we saw that they just had one defensive midfielder in front of the four defenders. Additionally, the Fohlen also played with a back three in some games.

Zakaria was in every Bundesliga game for all minutes on the pitch except for the match against Bayer Leverkusen in which Rose brought him on in the 69th minute for Nico Elvedi. The 22-year-old was either the lone defensive midfielder or, for the most part, the left part of the double pivot. In the two images below, we can see both options. In either case, he’s important for the build-up and tries to support the back four.

Zakaria always tries to create a passing lane to give the defenders a safe option. In the first image, he’s the only defensive midfielder and runs on the right side of the pitch to provide right-back Stefan Lainer a passing option into the centre. In the second image, he’s the left defensive midfielder while Christoph Kramer is the second one. The Swiss positions himself in the free space to receive a pass. 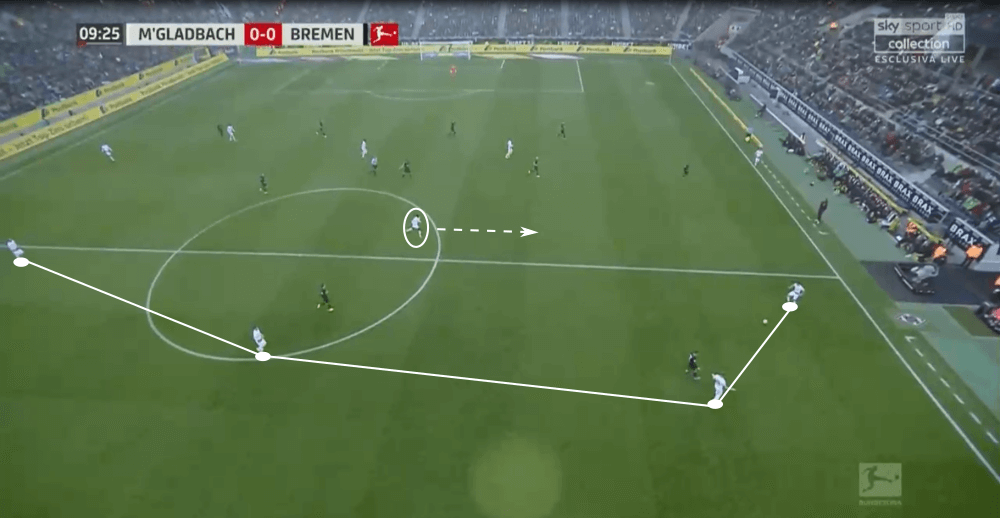 Zakaria is one of the best players in the Bundesliga when it comes to the defence. He makes on average 10.01 recoveries and 5.88 interceptions per game. As well as his ability to win one-on-one situations he has two other great strengths which help him to be such a hard opponent to play against: pace and stamina.

The Swiss international has good acceleration to keep up with his opponents on the first yards. On the other side, he is also incredibly fast for a player of his side and muscular physique. These two factors help him to defend against players with high speed as wingers or full-backs have nowadays. His pace also allows him to even get into duels and try to win the ball for his team or clear it. This can be perfectly seen in the example below. Firstly, Zakaria is in his typical position in front of the back four of Gladbach. Marco Reus plays a great through pass to Throgan Hazard. The 22-year-old defensive midfielder uses his pace to catch up with the Belgian and is able to get a touch on the ball to clear the situation. 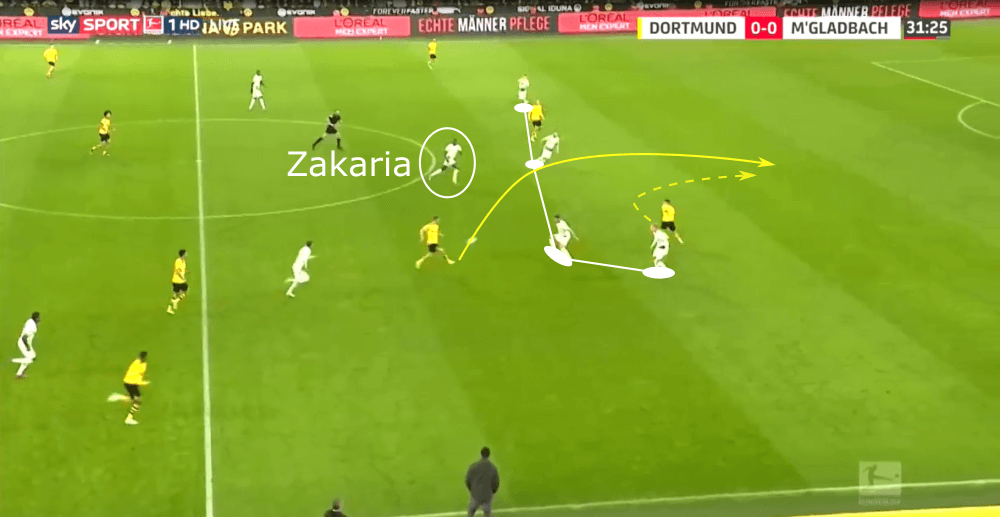 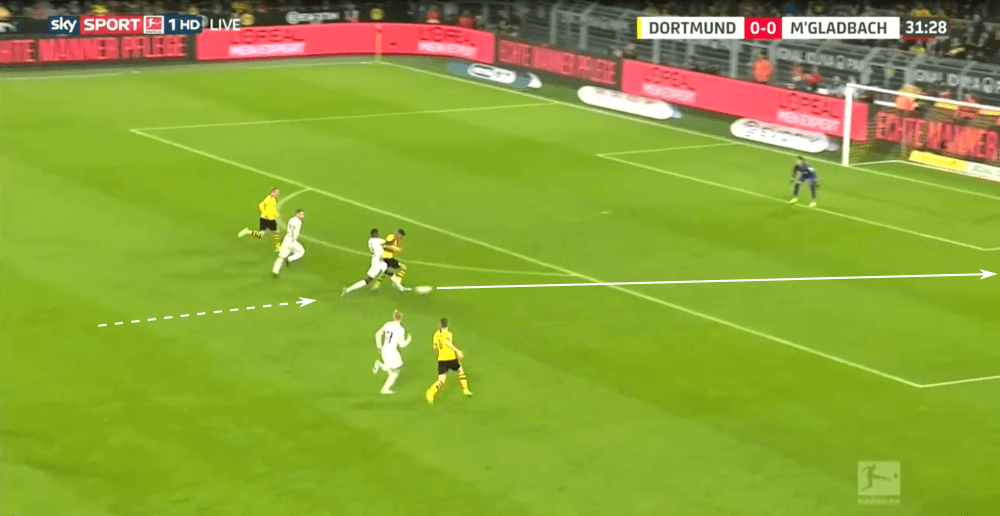 On the other hand, he has quite a lot of stamina due to his muscular physique which helps him win defensive duels against other players with a similar physique. He often wisely puts his body between the ball and the opponent to bring his team back in possession. This can be seen in the image below where he blocks Nicolò Zaniolo away to get on the ball.

However, many players in professional football have one of the two physical abilities. They are either fast or physically strong. It’s not that often the case that a player has both abilities. Anyways, Zakaria combines both aspects and the most important thing is that the Swiss player is able to exploit these qualities.

We can often see him using his pace to get into a one-on-one situation and then he gets on the ball with the aid of his stamina. In the example below, we see exactly such a situation as the opponent wants to pass the ball past him on the one side and run on the other one. However, Zakaria has the acceleration to be as quick as the opponent and then makes use of his physical strength to get on the ball in his own penalty box. 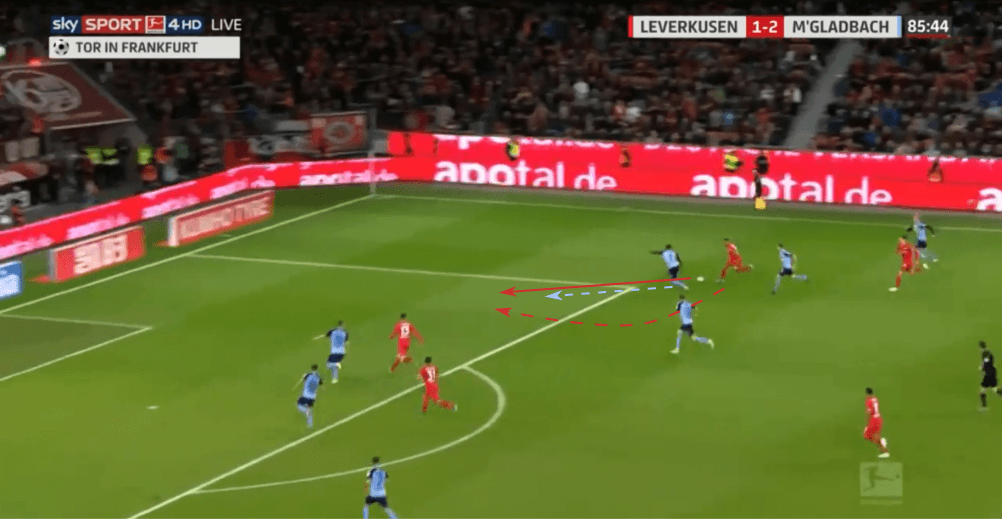 Rose’s teams are well-known for their aggressive work against the ball. We can often see how his players almost hunt the opponents to win back the ball. To do so, the players need the necessary aggression and will to get on the ball and bring their team in possession. It seems like Zakaria has got these two mental abilities, and knows what his German coach wants to see from him.

He always seems to go with determination and will in every single duel since he wants to recover possession for his squad. The image below is a perfect example of that. The opponents just made the kick-off, but the Swiss international storms towards his opponent who doesn’t see him since he stands with the back to Zakaria. Because of this, the 22-year-old surprises him and can win the ball. 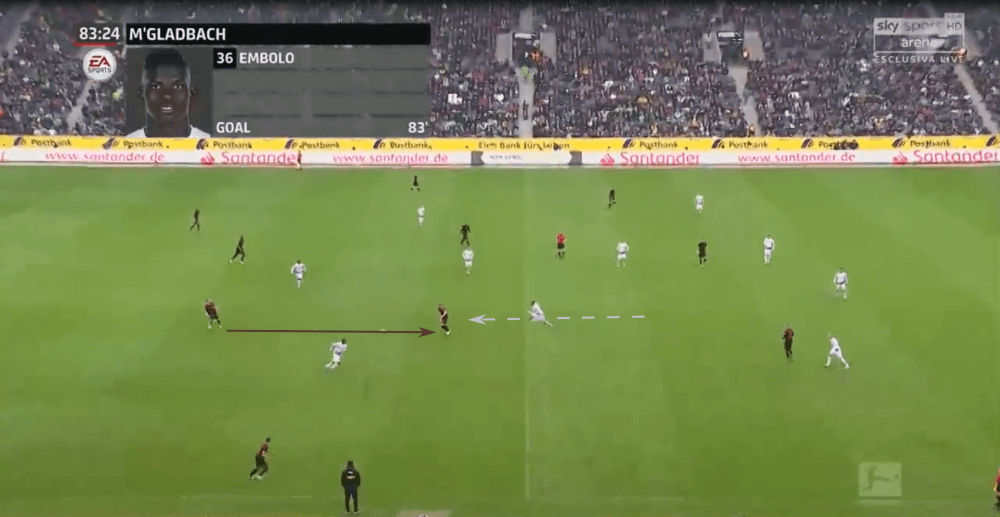 Managing the build-up and support the offence

We already saw in this analysis that Zakaria permanently tries to provide the defenders with a short passing option during the first stage of the build-up. However, he is also important for his team when they are already in the opposition’s half. In these situations, he dictates the game with short passes. Overall, he plays on average 33.8 passes per game. Only the two centre-backs Elvedi and Matthias Ginter, as well as right-back Lainer, are the players of Gladbach who play more passes per 90 minutes in this season in the Bundesliga.

Anyways, when the Fohlen are in possession in the opposition’s half, Zakaria stays outside of the defensive block of the opponents to be a safe option for a back pass. Also, from there he has a good overview and can organise the attacks.

Additionally, Zakaria also likes to get into a higher position and be part of the attack. In these situations, he shows his ability to find free spaces and position himself in them to receive the ball. Besides, he has a good understanding of the game. This gets visible in the image below as he receives a pass from his teammate Marcus Thuram who instantly runs into the free space behind the defence of Dortmund. Zakaria plays with the first touch a perfect through pass back to the French winger to create a goalscoring chance. 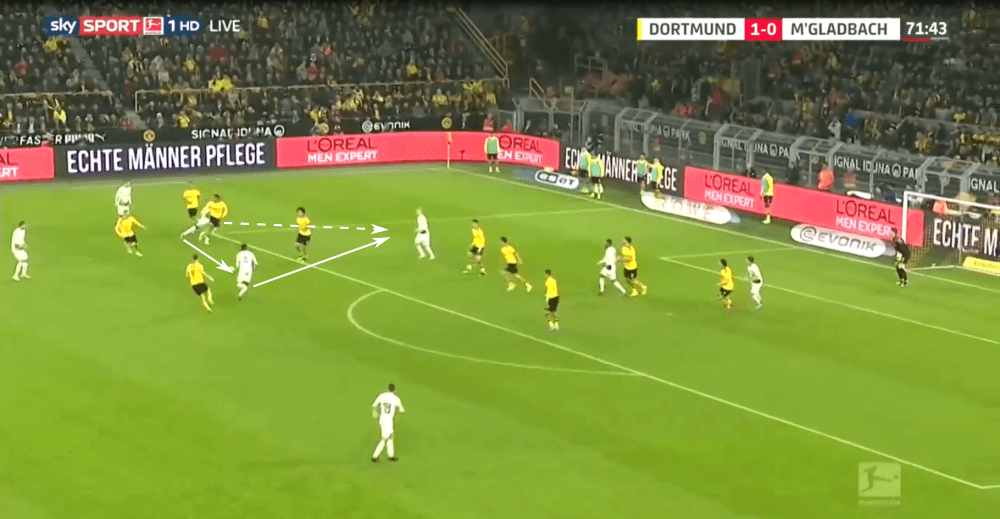 The already mentioned pace especially helps him get past opponents when he dribbles. He has the technique to execute a successful dribble, but his acceleration and speed clearly help him to make it even more effective. Also, Gladbach like to hit their opponent on the break and in such situations the pace of the players is a central aspect since counterattacks are more dangerous when they are executed as quickly as possible.

In the image below, he receives a pass from Kramer shortly after the won back the ball. He could instantly play a forward pass to Patrick Herrmann since he and Lars Stindl would have two-on-two situation. However, Zakaria decides to dribble forward by himself to join his two teammates and eventually create a three-on-two situation or play a through pass to one of his two teammates.

He’s even able to dribble past the two defenders, but he plays the through pass too late and due to that, Herrmann is ruled offside. Considering this, his idea was good, and he also executed it well, but he just played the pass too late. But this example shows that he can use his pace in such counterattacks

Lastly, we’ll look at one of his two goals which he scored until now in this Bundesliga season since in this situation, we can clearly see his intelligence and how he finds free spaces. In the first image, Oscar Wendt is on the ball and Zakaria is positioned in the centre as usual. Wendt plays a forward pass and Gladbach is able to progress the ball further up the pitch.

Meanwhile, Zakaria permanently stays behind his opponent Daichi Kamada and moves into the free space in the centre. Kamada can’t track him since he doesn’t see him and just moments later, Stindl is on the ball in the penalty box. Zakaria is completely free and receives a simple pass from his German teammate and simply places the ball with his first touch next to the near post to score the decisive goal to make it 4-2.

This scout report showed that Zakaria has got several abilities which make him so important for Rose’s side. The combination of his pace, stamina, aggressiveness, and defensive ability all makes him a really hard opponent to get past.

The Swiss international is also important for his team’s build-up and always tries to provide a safe passing option. The remaining games of this season will show how long he and his team stay at the top of the table. Regardless of that, Zakaria is already an outstanding player even though he’s just 22. In light of this, he’ll surely get even better and it will be interesting to see if he’ll move to a bigger European club since there are already rumours that several big clubs are interested to sign him including Bayern Munich and clubs from the Premier League.