Stefan Lainer recently completed a move to Borussia Mönchengladbach, following much speculation of where he would end up. The arrival of Marco Rose at the club is obviously a big influence, and the signing of Lainer highlights the style of play we were all expecting when Rose was appointed. An offensive, aggressive full-back, Lainer will buck Mönchengladbach’s recent trend of defensive-minded full-backs, and will likely become an important tactical piece for Rose. In this tactical analysis, I will identify Lainer’s qualities that made him a desirable player this summer and look at what Lainer will bring to Mönchengladbach.

Lainer is a very offensive minded full-back, who covers lots of distance per game in order to constantly make runs that disrupt the opposition. As a result of his offensive qualities, Salzburg’s tactics allowed him to take up high and wide positions on the pitch, something we often see form modern full-backs. His heat map illustrates this pretty clearly, with the whole of the right channel occupied. 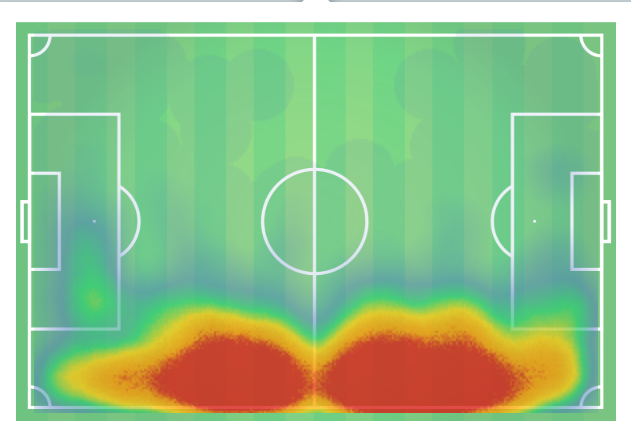 We can see some examples of his offensive movements below, where he constantly overlaps from deep to create an overload on the opposition full-back. There is a particular benefit to these runs being from deep, but before they can be done players have to have a very high fitness level and be quick enough to make up the space quickly. Lainer has both of those things, so when he makes his runs from deep, it is difficult for the opposition to track him or limit his space to run into.

For example below, we can see the winger delays the pass and waits for Lainer to overlap, meaning he cannot be tracked by an opposition full-back, who is occupied with the winger. This gives Lainer the space he needs to deliver his excellent crosses into the box.

We can see another example of Lainer’s overlapping runs below, where he makes a run from a more central position past the winger again. The positioning of the striker between the centre-back and full-back prevents Napoli’s full-back from moving out too far to press Lainer, and so again Lainer has a free opportunity to deliver a cross into the box.

I would suspect Marco Rose will continue to work on this part of Lainer’s game, as he will want Lainer to become faster and more fluent at making these runs, as it is unlikely his teammates at Mönchengladbach will have as much time on the ball to delay so Lainer can overlap. Therefore, Lainer’s positional awareness will have to improve in order to edit his starting positions so he has less ground to make up when overlapping, while still maintaining a good space for him to run into. This is by no means a weakness of Lainer’s, but may be something Rose will look to refine in him.

Lainer has an excellent ability to deliver crosses, from deep positions and advanced positions, and registered eight assists this season. The deep position that he makes runs into above was used to deliver crosses into Salzburg’s attackers often, as we can see in the example below. This example shows that if Lainer is given space on the flanks or can create his own space as illustrated, he can deliver quality crosses into the box.

The evidence for his fantastic crossing ability is not in his assists total, however. Instead, we can see his true quality when looking at his accurate crosses percentage. 35.1% of Lainer’s crosses are accurate or reach a teammate, which is almost identical to other quality offensive full-backs such as Trent Alexander Arnold (34.6%) and Joshua Kimmich (35%), despite Lainer averaging more crosses per game than both of these players.

Part of being an offensive full-back is having the physical attributes to be able to make defensive recovery runs back into position when needed. If a turnover in possession occurs, Lainer is often high up the pitch meaning he has to have the pace to be able to get back into a defensive position. Lainer has the ability to do this, as we can see with some examples below.

In this example, Salzburg lose possession in their own half after Lainer moves high and wide and is looking for a switch in the play. This means a space is left in the right full-back position for the opposition striker to drive into. Lainer recognises this and quickly sprints back and calmly makes a recovery. These kinds of movements for a full-back, moving from inside out and outside in diagonally, are the most important.

in the Bundesliga, Lainer may have to adapt his style slightly, and again I think Rose will work on this with him to ensure he picks the right moments to move high and wide and look for the ball. If he moves too soon and possession is lost, teams in the Bundesliga may attack the space left much more effectively, so the timing and application of these runs is important.

Contribution to the press

As mentioned, Lainer is an aggressive player off the ball and was used by Rose in Salzburg’s press. Salzburg played a narrow 4-4-2 diamond, which allowed them to dominate the central areas and force opponents wide. Once forced wide, the ball was often with the opposition full-backs, and so the full-back was pressed by Salzburg’s full-back, Stefan Lainer.

We can see an example of this below, with the ball reaching, in this case, Napoli’s full-back. Salzburg have the central options covered, and so when Lainer presses Napoli have only one option of a ball down the line, which Salzburg set up for accordingly. 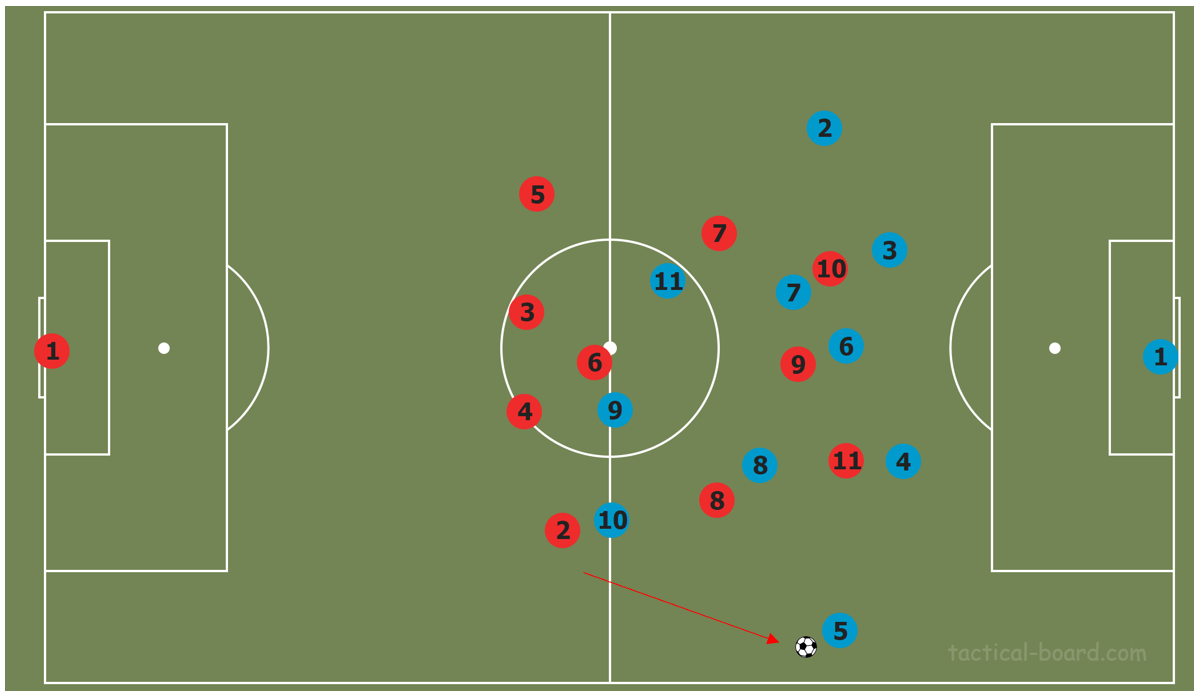 Lainer’s speed and aggression mean he gets a touch on the ball and causes the pass to be misplaced, but it goes down the line anyway. Salzburg centre-backs then move into the conventional full-back position, while the holding midfielder drops back into an almost centre-back position, meaning Salzburg have a back four again. 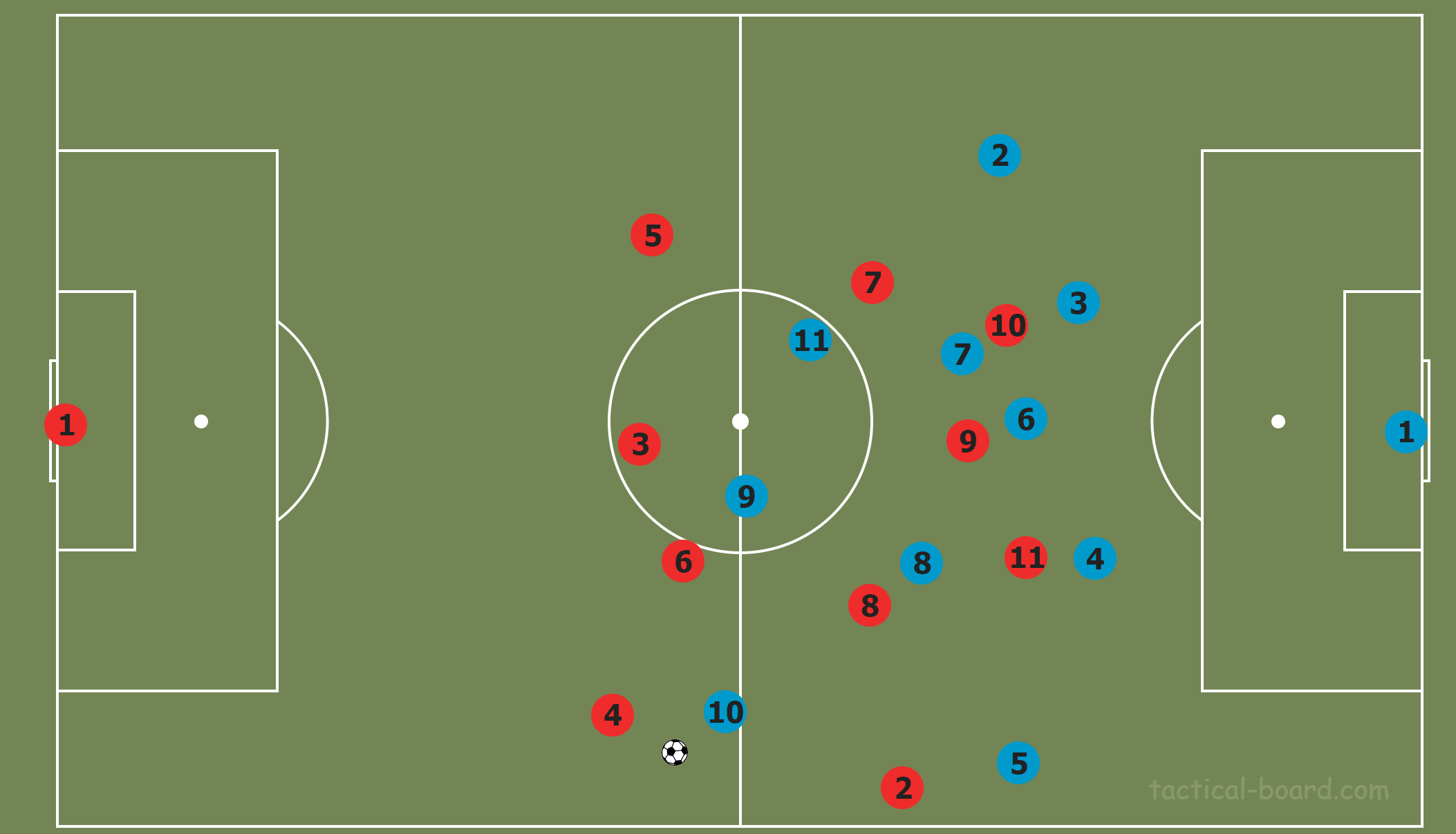 Here is the example of this press in the game against Napoli, with Lainer pressing the full-back while the central options are covered.

Other than some small refinements mentioned above, the only area that really stands out as needing improvement is his defensive duels and 1v1 ability defensively. Lainer can be at times dribbled past and beaten in 1v1’s easily, and if he is able to improve this in his game he will no doubt cement himself as one of the best full-backs in the Bundesliga.

His aggressiveness can sometimes exacerbate his 1v1 issues, for example below, where Lainer moves out to try and counter press the counter-attack. But Lainer dives in early, meaning he is dribbled past and leaves a large space behind him.

Here, Lainer gets caught too square and the attacker plays a simple nutmeg and drives into the space. Lainer’s body shape is solely forward facing, so his change of direction to go back is much slower, and so the attacker has a better chance of beating him to the ball.

This is a superb signing for Borussia Mönchengladbach and one that signals the coming changes in the club’s playing style. Lainer was an important part of Rose’s system at Salzburg and will be an important part of trying to restore Mönchengladbach to their former glory. This scout report has sought to explain why using analysis, and I have no doubt that can Lainer make the refinements in his game, that he can become one of the signings of the season.