Following a comfortable victory over Norway in the quarter-finals of the FIFA Women’s World Cup 2019, England went into the last four confident of beating tournament favourites USA. The Lionesses also reached this stage back in 2015, with the United States ultimately crowned champions.

Despite mounting a stronger challenge in the second half of this encounter, Phil Neville’s side are heading home after a narrow defeat. This tactical analysis will attempt to explain their shortcomings, as well as shining a light on the strengths of Jill Ellis’ team.

England varied between a 4-2-3-1 and a 4-4-2 formation, with Nikita Parris playing a fluid role behind Ellen White up front. Rachel Daly and Beth Mead provided the width, while Jill Scott joined up with Keira Walsh to provide more support at the base of midfield. Demi Stokes retained her place at left-back, with Neville preferring the Manchester City player over Alex Greenwood. 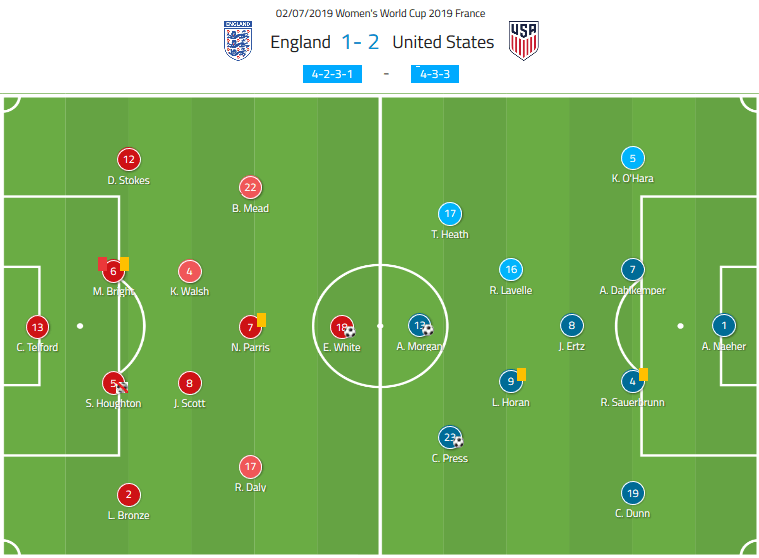 Ellis elected to go with a 4-3-3 but retreated to a 5-4-1 during the closing stages. With Megan Rapinoe rumoured to be nursing a hamstring injury, Christen Press was selected on the left-wing. Her defensive output would prove crucial in restricting Lucy Bronze. Dynamic midfielder Rose Lavelle was expected to join the attack at every opportunity, while Becky Sauerbrunn and Abby Dahlkemper paired up in central defence.

Throughout this tournament, England’s main strength has been the elite duo of Lucy Bronze and Nikita Parris. Their combinations down the right have been crucial to the Lionesses’ success in recent times, making it something of a surprise to see Parris selected in a more central position last night.

In any case, the USA were determined to congest the right wing, limiting the potential for Daly and Bronze to progress. In the image below, the latter is attempting to drive forward with the ball but is tracked closely by Press and ultimately forced over the sideline. 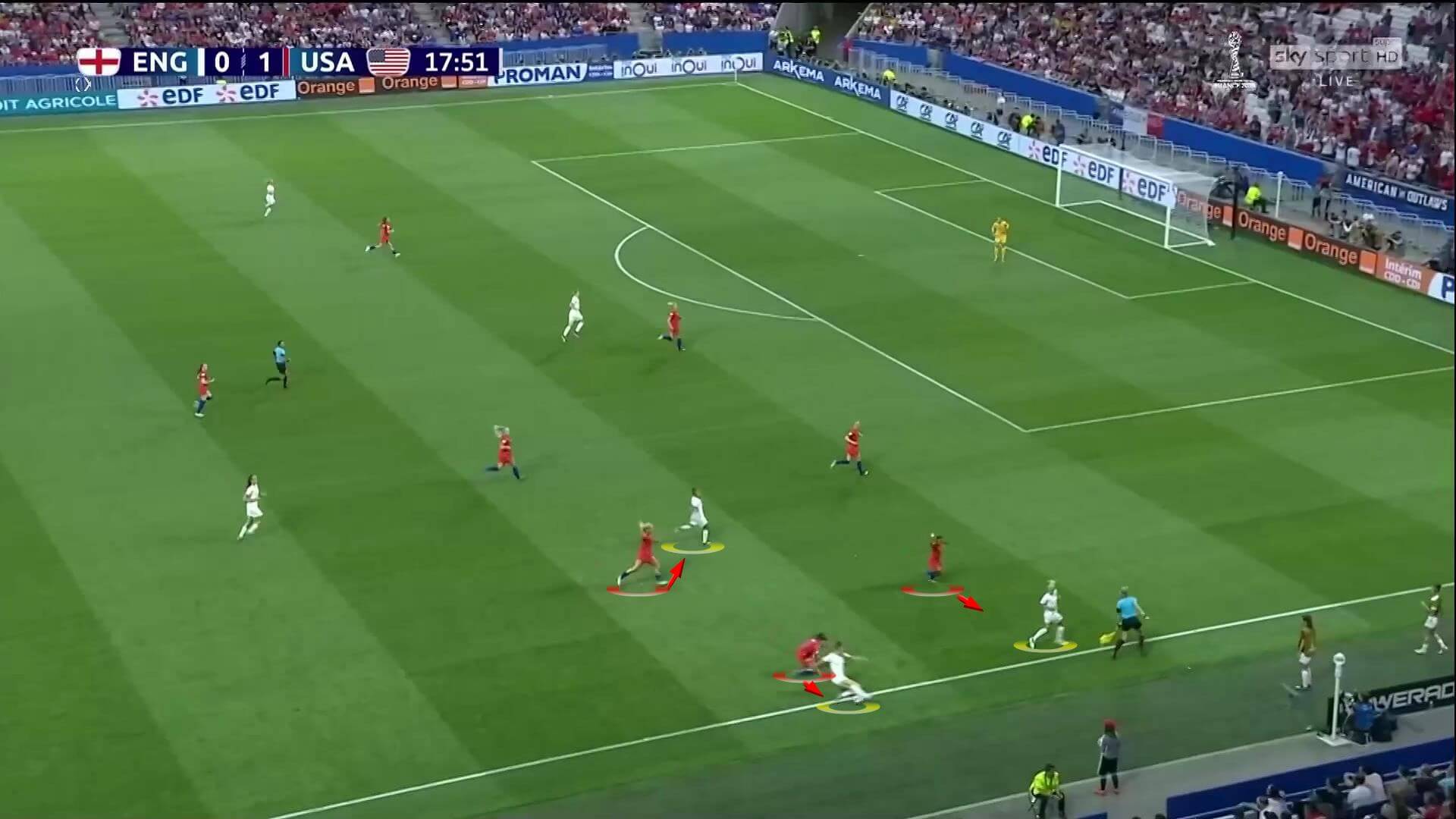 These kinds of instances were a pattern throughout the first half, and Press was always on hand to close her marker down. She also looked to cut-off the short passing options available to Bronze, often forcing her to go long.

The image below illustrates an occasion where the Lyon right-back again put the ball out for a throw-in due to the challenging conditions imposed by Press. Having rotated positions with Daly, Parris looks to receive as the free player on the right wing. However, she is kept in a cover shadow and the move fails to advance. Naturally, England looked to exploit these scenarios by switching the play to Mead on the left. The Arsenal winger consistently found space to receive from Walsh’s diagonal cross-field passes, with the USA defensive structure orientated towards the right.

In the example below, Walsh switches the point of attack, finding Mead free on the far side. White strengthens the situation further by engaging the opposing right-back Kelley O’Hara, before dragging her infield with a decoy movement.

Having taken the ball down perfectly, Mead picks out White for the equaliser with a precise delivery. The finish was typically clinical from the tournament’s joint top scorer, level with Morgan on six. 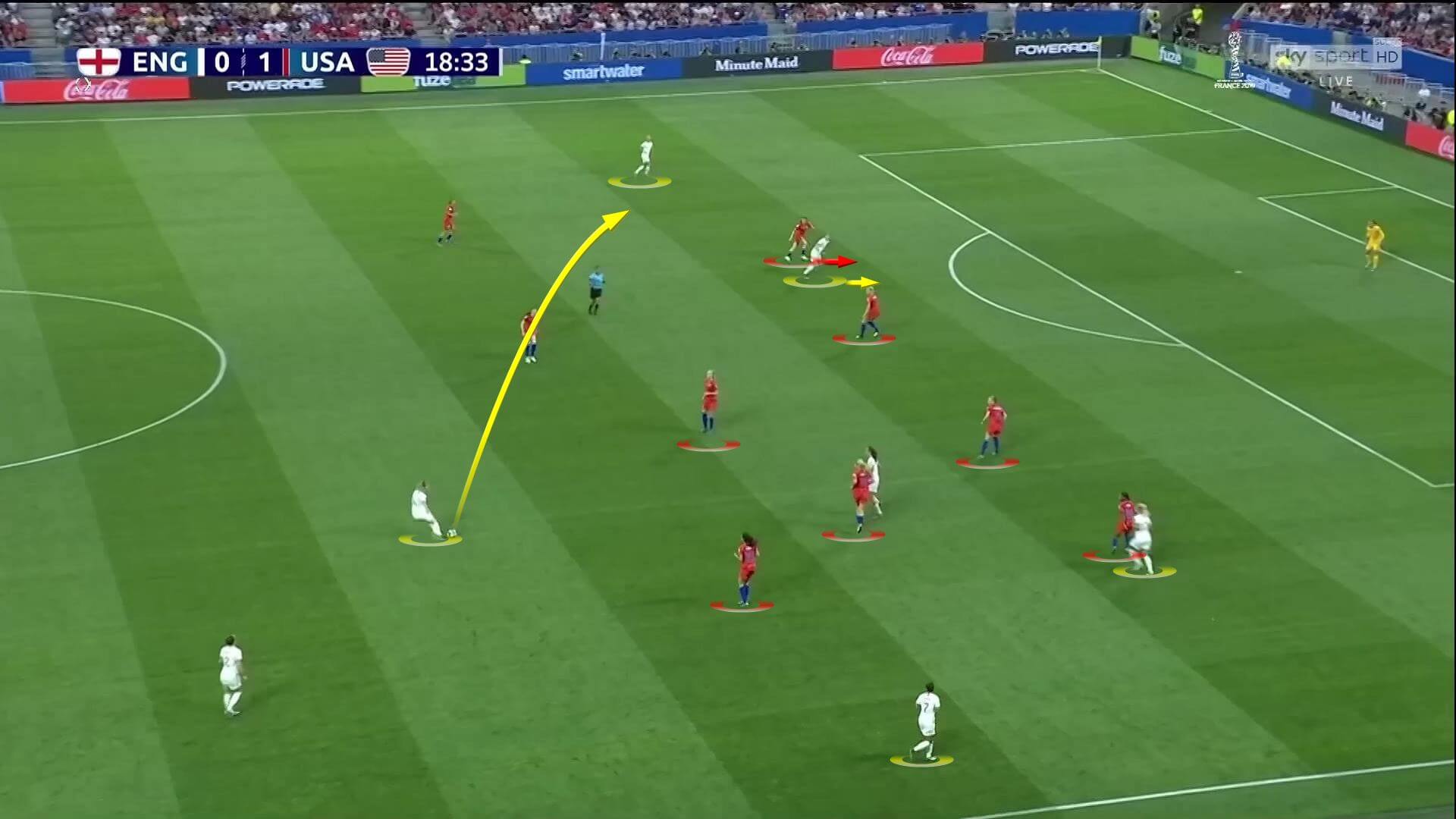 The Lionesses will feel frustrated that they were unable to exploit their strengths down the right-hand side in this game. USA succeeded with their plan to nullify the threat of Bronze, even if it did come at a cost.

Along with being prepared to cope with their opponent’s strengths, Eliss’ team were also focused on exploiting England’s weaknesses. In their quarter-final win against Norway, Neville’s side struggled to cope with aerial duels. Many of the quality opportunities they conceded arose from simple long balls directed at Steph Houghton and Millie Bright.

Both goals in this game also came from their inability to deal with the threat of lofted passes and crosses. The image below shows the opening strike in this tie, with Tobin Heath allowed to deliver from the advanced right wing.

Press is ready to arrive at the far post, making a run on Bronze’s blindside. The defender fails to adjust her positioning in order to have a better view of her marker, and the mistake proves costly with Press heading past Carly Telford. 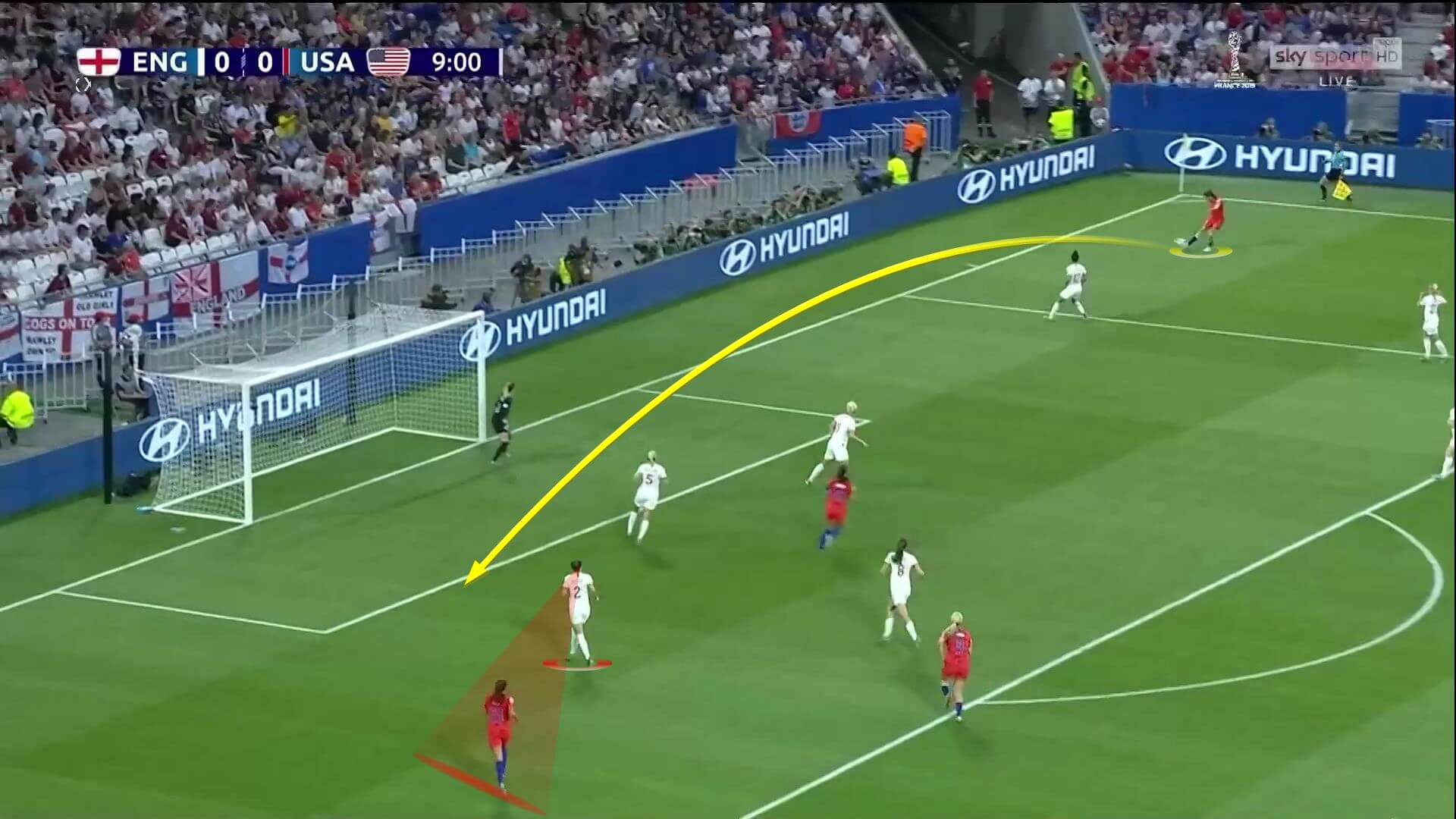 The USA took the lead for a second time on the half-hour mark. Once again, a lofted pass brought great rewards for the reigning champions as Lindsey Horan picked out Morgan for a simple header.

As shown below, Morgan loses the centre-backs instead exploiting a height advantage over left-back Stokes. She meets Horan’s cross with perfect timing to go level with White in the race for the golden boot. 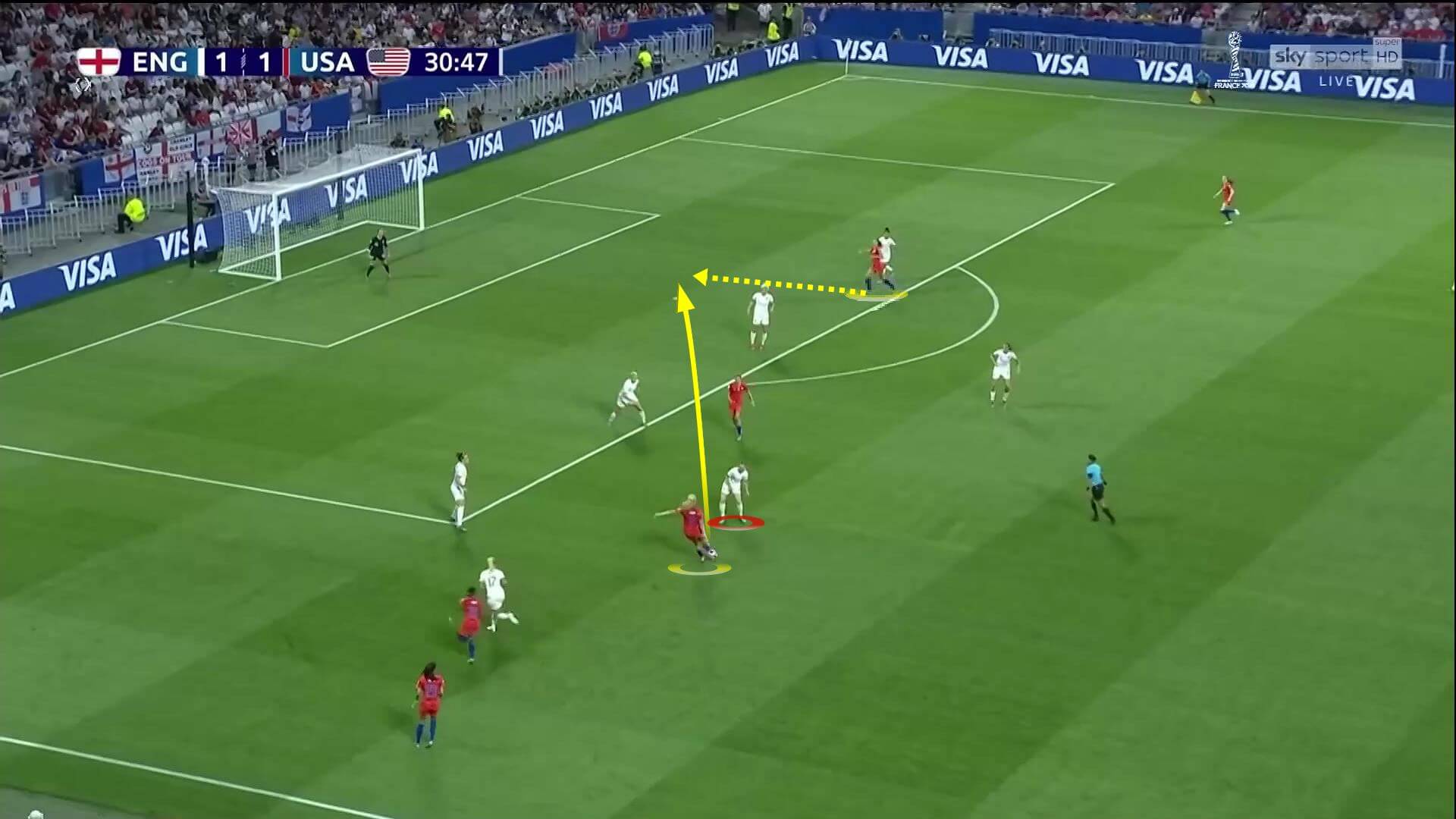 While aerial balls in the final third ultimately won this battle for the USA, they also regularly chose to go long during the build-up. Even in scenarios where they had a two-player advantage in the first phase, Alyssa Naeher often still elected to take a more direct route to the attack.

The United States’ approach to build-up may have been a conservative decision aimed at avoiding mistakes in fatal areas of the pitch. England, on the other hand, decided to persist with their tactics of playing out from the back.

Unfortunately, they struggled in any circumstance where they were subjected to pressure deep in their own half. As shown below, the US often applied a positional press during their rivals build-up. Time and time again, it led to misplaced passes and errors. In this instance, Press blocks Houghton’s long ball attempt, forcing another goal kick. 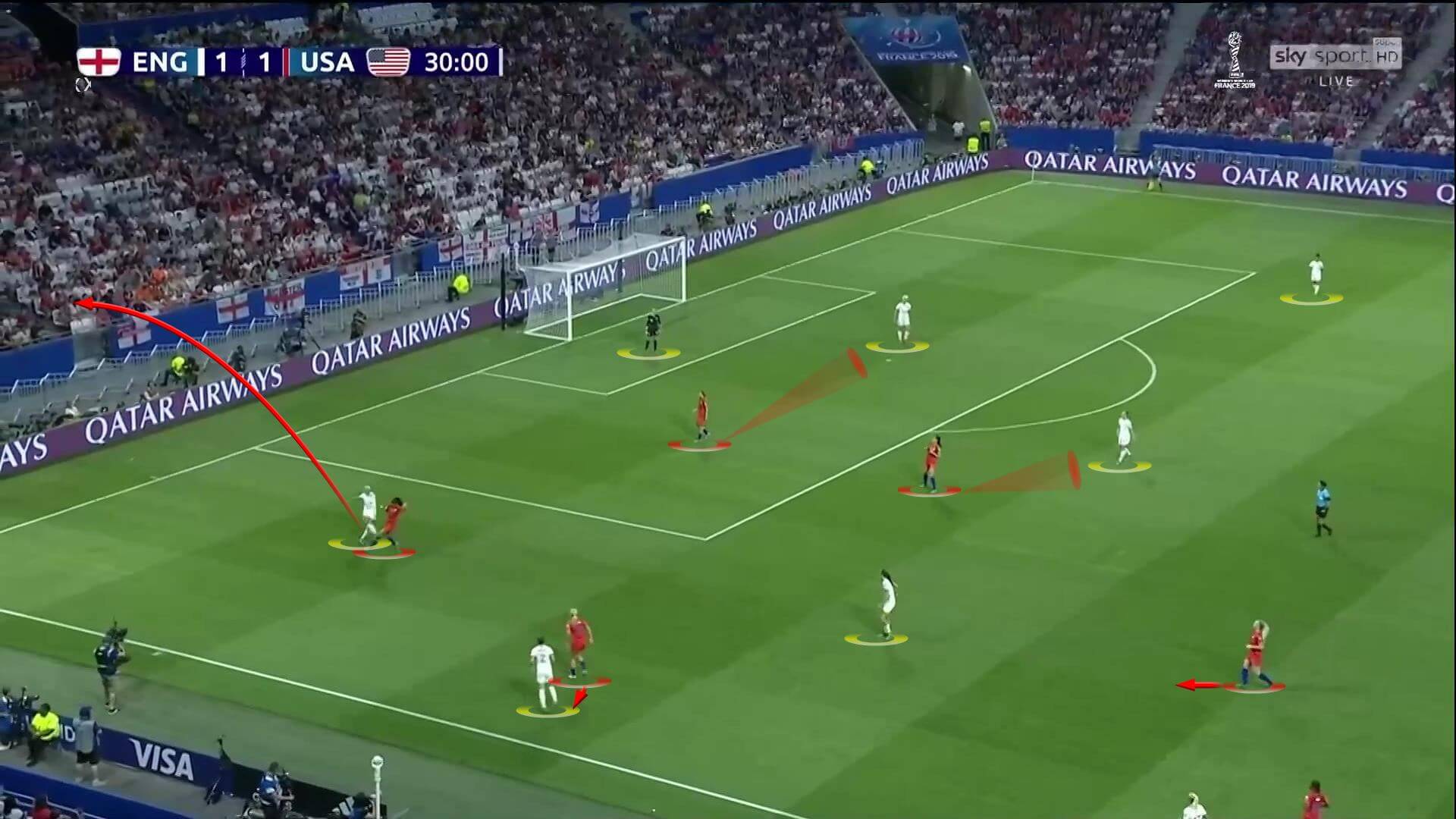 Ellis’ team were clearly well drilled without the ball, closing down the player in possession while shutting off the short-passing options with their angle of approach. However, England didn’t help themselves either.

They consistently failed to provide the correct angles to give the ball-occupant multiple options for progression. In the analysis below, Telford passes straight to the opposing striker, only for her blushes to be spared by a misplaced shot.

Left centre-back Bright is positioned with her back to goal on a higher line than her defensive partner. With no options to lay the ball back to a teammate, the play would likely have broken down even if she had received possession.

Bronze is also free in space on the right, but Telford panics under pressure and makes the wrong pass selection. With that said, her options are severely restricted by the positional play of her teammates and the intense press being applied by the opposition. 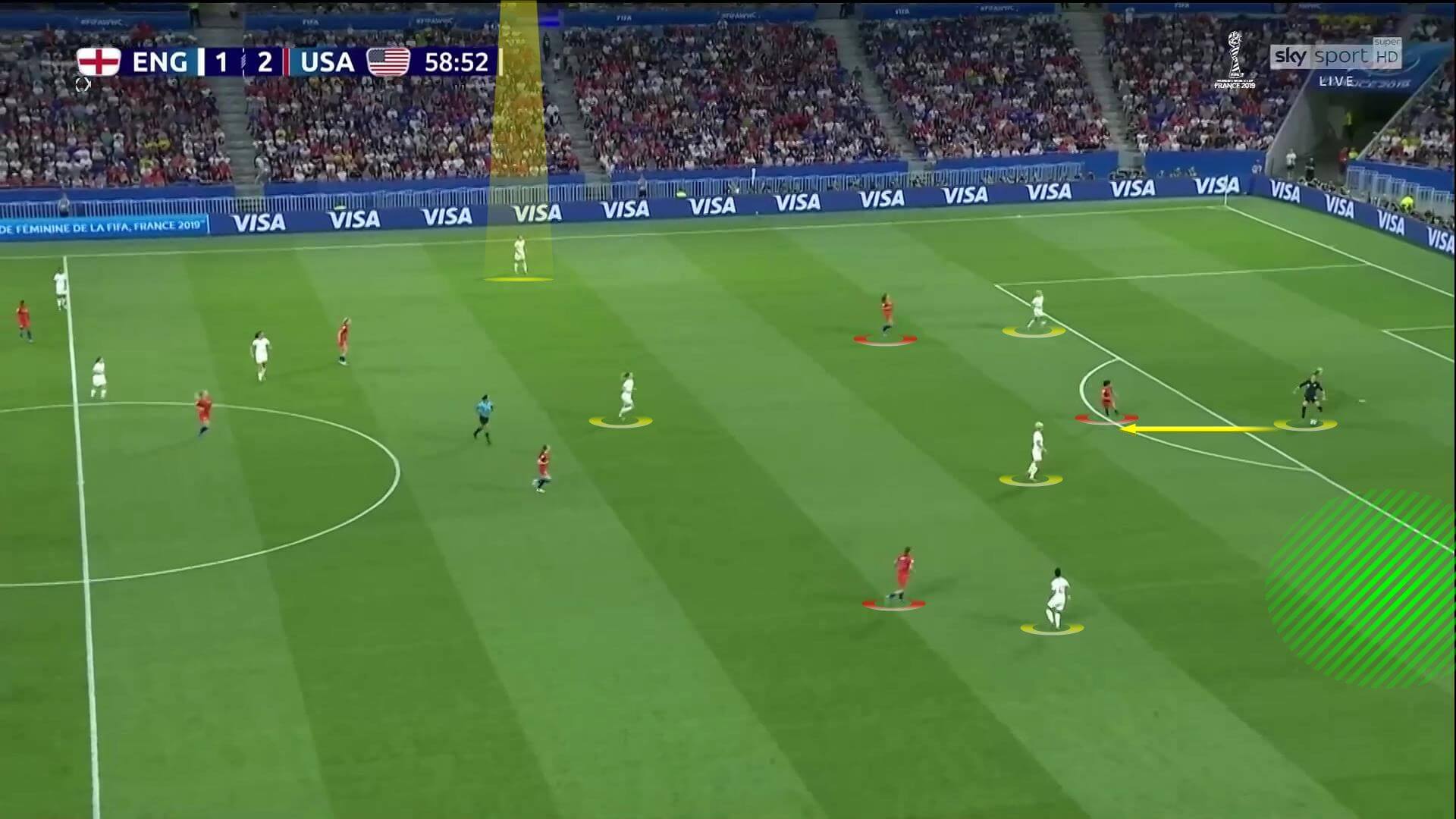 The final example again shows a lack of awareness in the first third. Jade Moore and Scott are both out of the ‘line of pass’, leaving Houghton with no real options to progress. Scott could have pushed up into the space between the US attack and midfield, creating the option of a lofted pass for the player in possession. 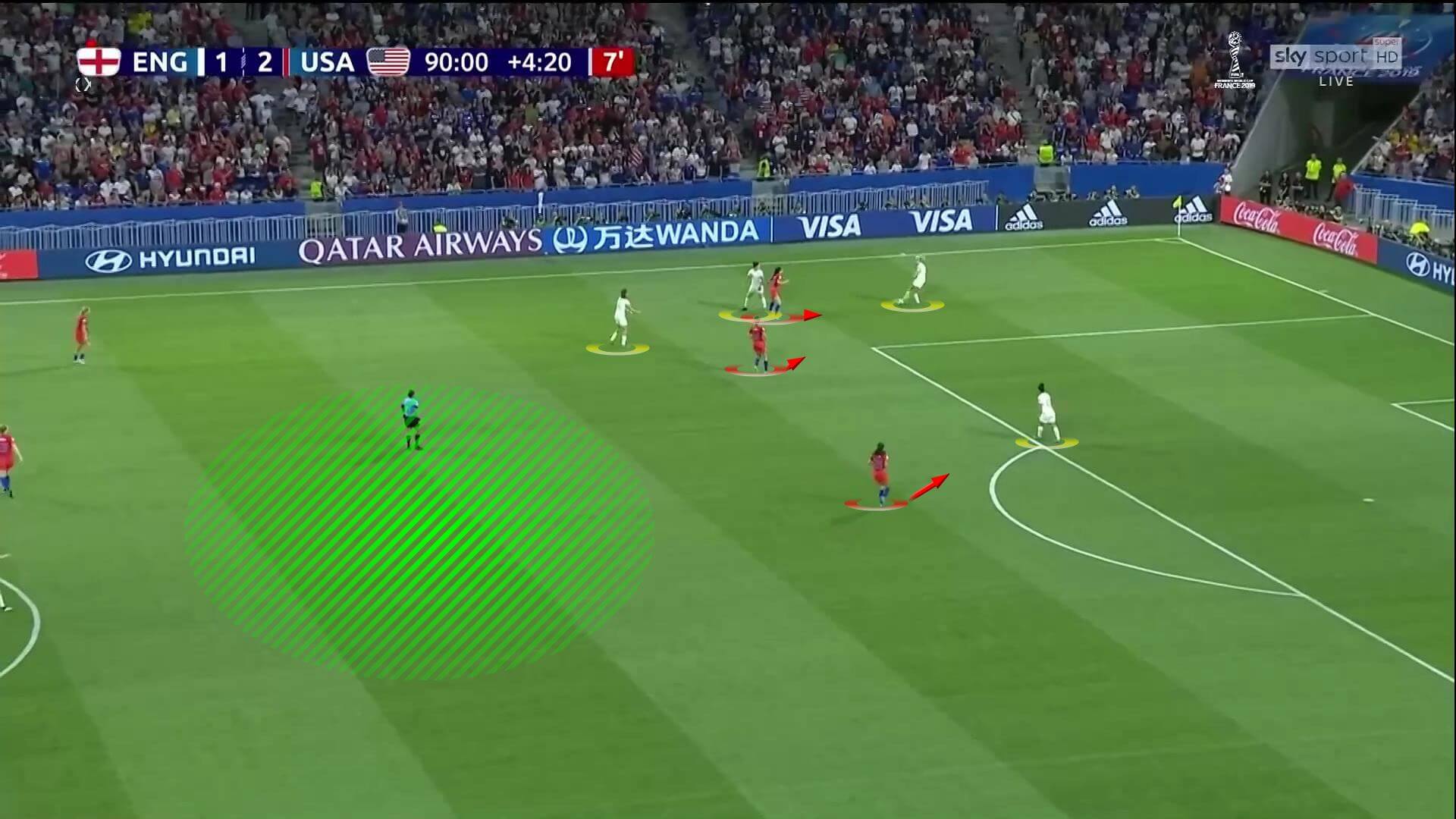 As we have seen previously in this competition, England didn’t always apply the principles required to execute playing out from the back under pressure. Their technical level further hindered them in their attempts to meet Neville’s system demands, with clear inferiority in this department last night.

Despite their difficulties, the Lionesses did manage to create more quality opportunities in the second half. Substitutes Fran Kirby and Jade Moore accelerated this process, with both heavily involved in England’s biggest chances.

In the image below, Moore plays a penetrative pass through to Scott. The Manchester City midfielder plays a first-time ball in behind for White to run through on goal. The 30-year-old striker finishes with composure before her effort is flagged offside. 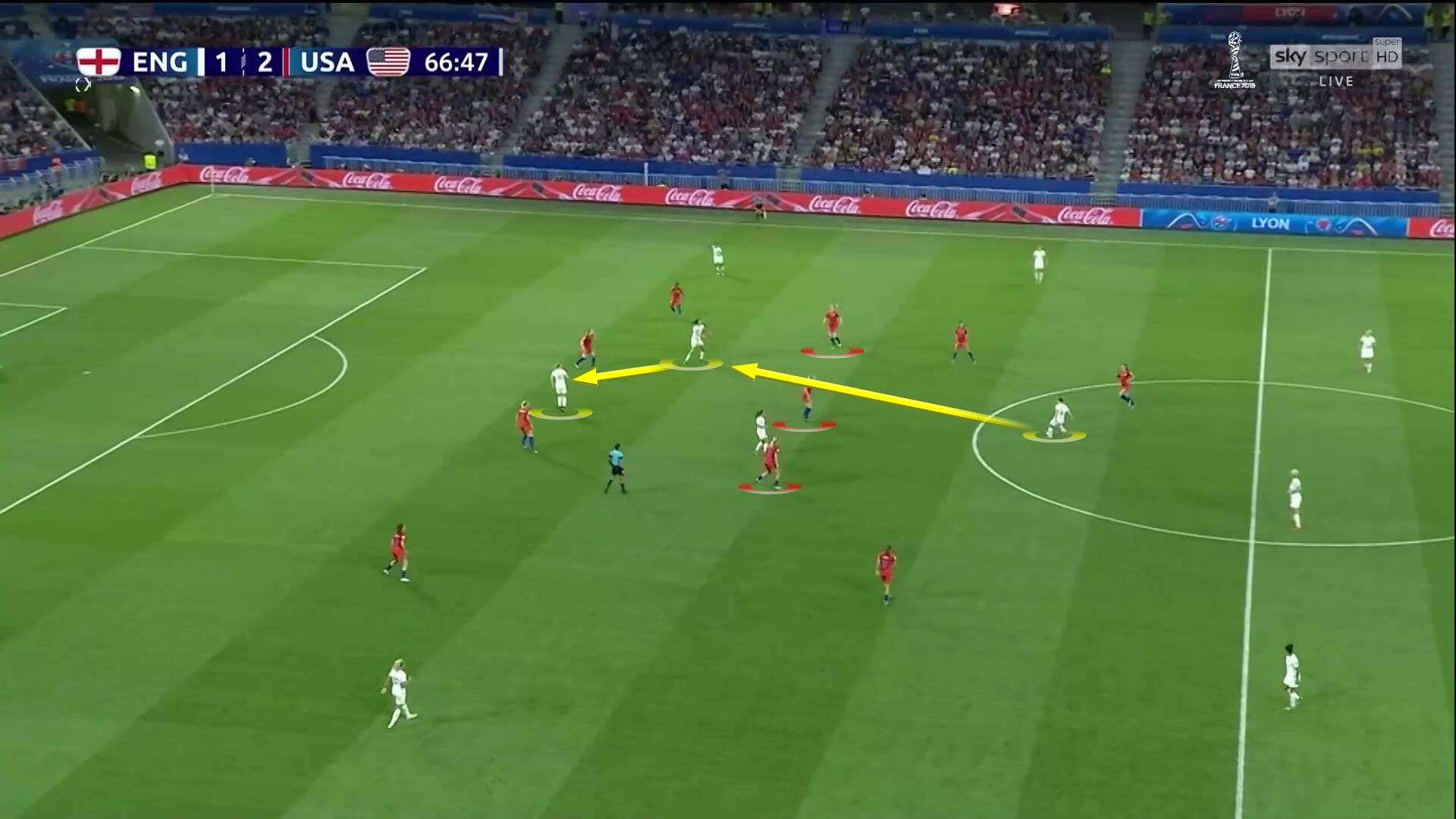 Replays showed that White was a toe ahead of the last defender as the ball was played, and the drama didn’t end there. Twelve minutes later, Chelsea star Kirby received possession in the ten space, increasing the pressure in central areas and freeing up space for Stokes to arrive on the outside.

The fullback is picked out with a perfectly timed pass from the playmaker before her low-cross is missed by White. The Lionesses appealed for an infringement from defender Sauerbrunn, and the referee made use of VAR to award the spot-kick. Captain Steph Houghton took on the responsibility after Parris had failed to convert her previous two penalties, but the captain’s effort was saved by Naeher. 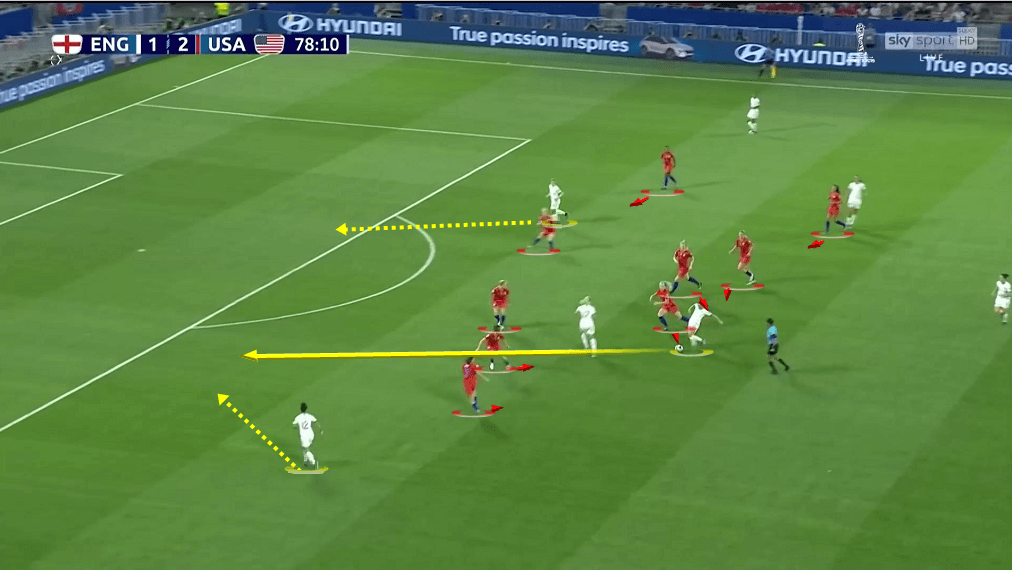 Bright was sent off for a second yellow in the 86th minute, and England were unable to create any more significant chances. The USA held out for the win, retreating to a back five in the latter stages.

Despite recording more possession, England lacked the cutting edge and the tactical nous to overcome superior opposition in this encounter. The USA, meanwhile, progress to the final of the FIFA Women’s World Cup 2019 thanks to headed goals from Morgan and Press. They will face either the Netherlands or Sweden in a bid to become world champions for the fourth time.