Brentford have been one of the best performers in the English Championship this season. Their style of football and unique transfer strategy has attracted much attention. David Raya is central to both these areas. He was brought in from Blackburn Rovers at the start of the 2019/20 season, and his incredible passing ability is instrumental to the way Brentford play. Excluding Leeds, Brentford had conceded the least amount of goals in the Championship this season.

This tactical analysis will look at Raya’s strengths from this season and what he needs to improve on to get to the next level. We will take a look at how the keeper fits into Brentford and Thomas Frank’s tactics. We will analyse three aspects of goalkeeping: shot-stopping, passing, and ability to sweep.

Does Raya stand out?

In our analysis of goalkeepers outside the top five leagues, Raya stood out and was shortlisted as one of the best young goalkeepers to look out for. Raya was positioned well in every stat we analysed, however, he only stood out on the passing department. 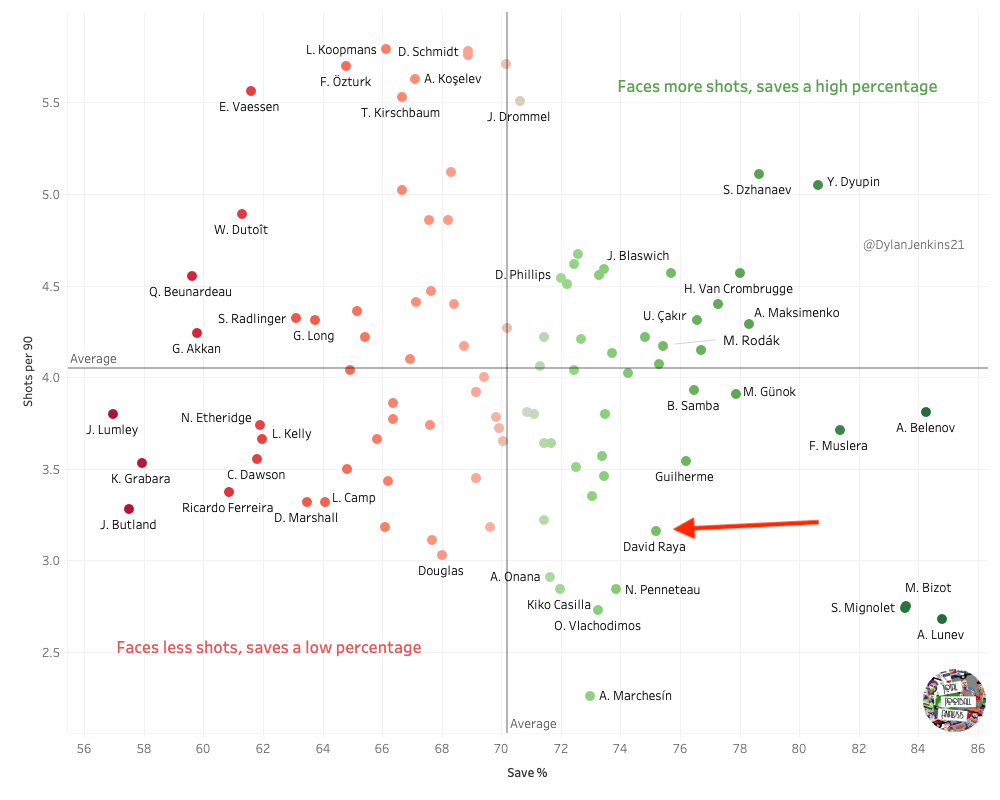 Although Raya had an above-average save percentage, he wasn’t one of the standouts like former Liverpool man Simon Mignolet was. He doesn’t face a lot of shots per 90, as evident in the graph. Therefore, this save percentage isn’t as impressive as players in the top right quadrant. Nevertheless, Raya is one of the most promising goalkeepers outside the top five leagues.

The 24-year-old has been praised for his passing ability and the role he plays within the Brentford style, however, his shot-stopping and reflexes are often overlooked. Raya has a save percentage of 75.19% which is very good for a goalkeeper who doesn’t face many shots. He often goes large parts of games without being bothered and has to be ready to make a save when called upon. Throughout this season he had an xG per 90 value of 0.86, meaning he faced some difficult shots, however, he only conceded 0.79 goals per 90.

Raya’s best attributes lie in his reflexes and ability to get down low to make important saves in crucial times.

Raya is fairly small for a goalkeeper, standing at 1.83m tall. However, goalkeepers such as former Real Madrid captain Iker Casillas have proven that this isn’t a negative if you have good reflexes and anticipation. 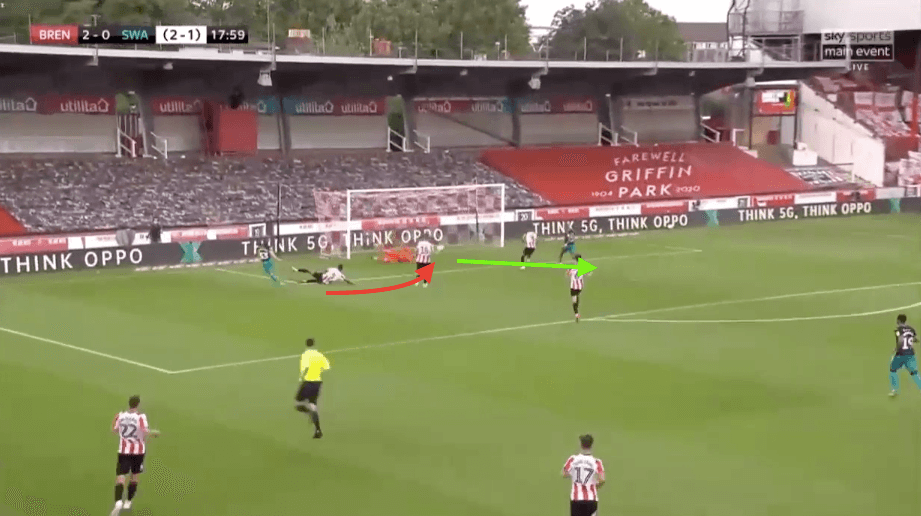 Above, we see Raya’s crucial save against Swansea in the Championship play-off semi-final. The Spaniard uses his anticipation well here, he sees that the Swansea man open up his body, and anticipates that he will shoot the ball across goal. His small stature means that he can get down low quickly and get a strong hand to it. His strong hand means that the ball doesn’t fall to the Swansea player at the back post.

As well as using his reflexes to prevent goals, he also combines his aggressiveness and sweeper mentality to stop attackers in one-on-one situations. 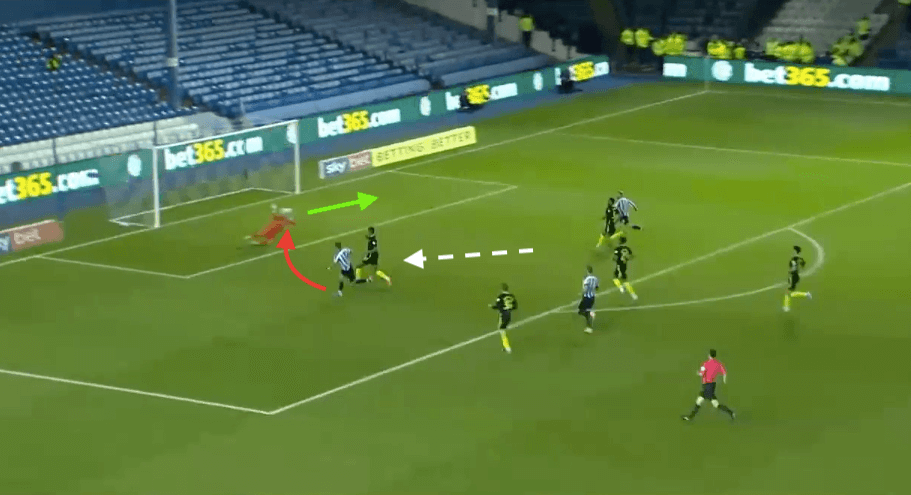 Against Sheffield Wednesday, Raya found himself in a one-on-one situation. Instead of rushing out towards the attacker, leaving a lot of his goal exposed, he does the sensible thing and lets the passage unfold further. Coming out to his six-yard box puts the attacker under pressure, but doesn’t leave enough space to be chipped. A Brentford defender is able to come across and apply pressure, meaning the shot won’t be as good. Raya has enough time to react as the attacker was rushed into an early shot.

However, no goalkeeper is perfect. Raya’s height means that he can’t reach shots that are towards the top corner of the goal. Other goalkeepers have made up for this with their great anticipation, but Raya doesn’t seem to be at that level yet.

As we can see in the shot map above, Raya doesn’t often make saves too high up in his goal unless it’s in the centre. This could be an area of concern, as he can’t change his height. The Spaniard will have to improve his anticipation and reflexes if he is to begin saving difficult shots.

Raya’s shot-stopping has been incredible this season, with the chances he faced he was expected to concede 41 goals, but he only conceded 38, giving him an xG +/- of three. This stat shows how much he overperformed this season.

In our analysis of goalkeepers outside the top five leagues, the Spanish shot-stopper was arguably the most impressive passer. Brentford averaged the third-most possession in the Championship this season, with 57.4%. Their short passing style was important here.

As evident in the example above Raya will assess all possible options before sending the ball long. Against West Brom, two attackers were closing Raya down whilst others prevented Brentford options. Instead of sending the ball long, Raya dribbled between the two pressers and delivered a good pass to Pontus Jansson. This not only shows Raya’s commitment to his team’s tactics but his confidence to take opponents on.

When Raya decides to go medium/long, he usually has positive results. He has great vision to spot a medium pass, and usually delivers it accurately. However, because of Brentford’s short forwards, he doesn’t have much success when he goes long.

Here we see Raya’s ability to scan the field with one look before delivering a perfect pass to Saïd Benrahma’s feet. This enabled the winger to get the ball under control straight away and find a pass to his left-back. Only 34.09% of Raya’s passes are followed by a duel, showing how good his pass accuracy is.

Raya is frequently used as a pass option for his Brentford teammates, receiving 17.16 passes per 90. His goal kicks are also very similar. 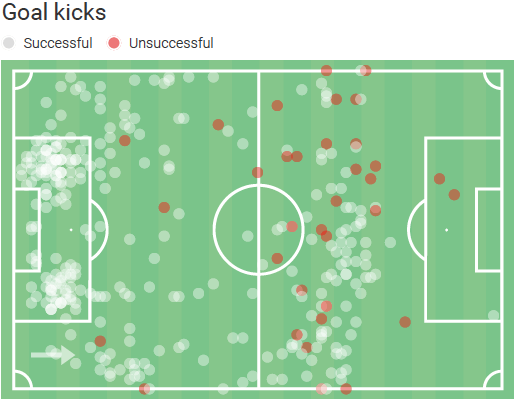 As the map above shows, Raya and Brentford utilise the new rule that defenders are allowed inside their own box. Brentford use their centre-backs and three central midfielders to beat the opposition press from goal kicks. 64.94% of his goal kicks are to his own third.

Here’s how he compares to other goalkeepers outside the top five leagues. 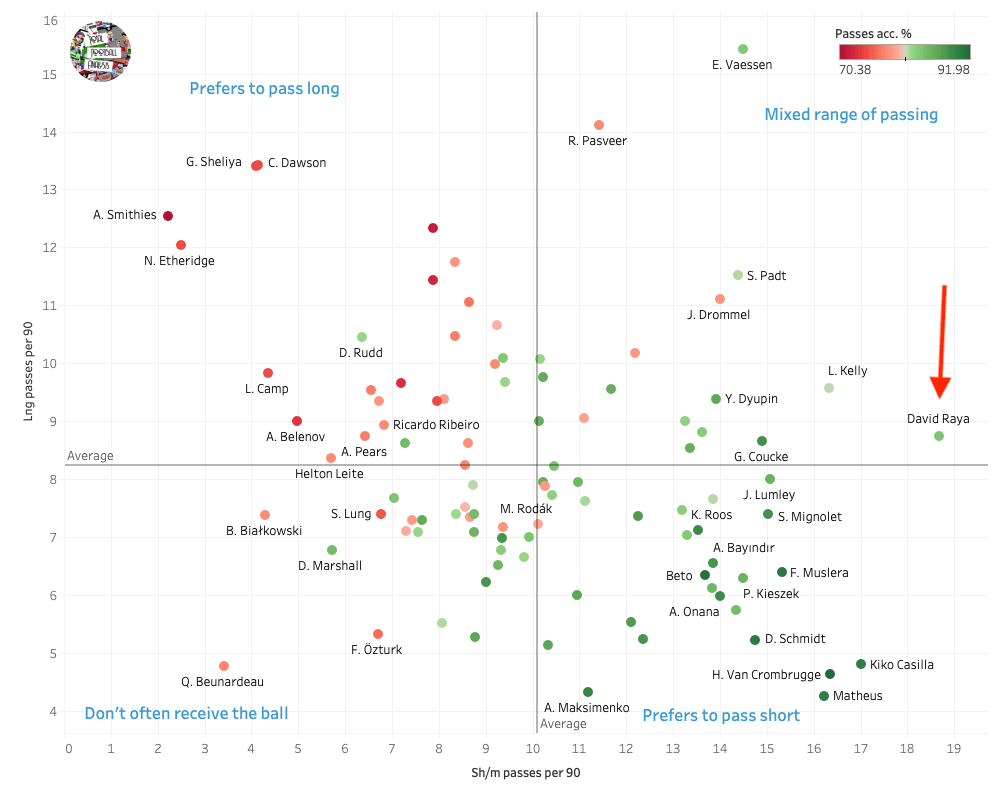 Although he has a mixed range of passing, he makes the most short/medium passes of any goalkeeper. But is clearly adept at going long too.

Brentford’s number one can most definitely be put into the category of ‘sweeper-keeper’. Because his back four play a high line, Raya needs to be ready to sweep up any balls that are played in behind. We referred to his confidence on the ball earlier on, and this helps in sweeping situations too. Raya has 2.38 exits per 90 and 1.38 sweeps per 90. 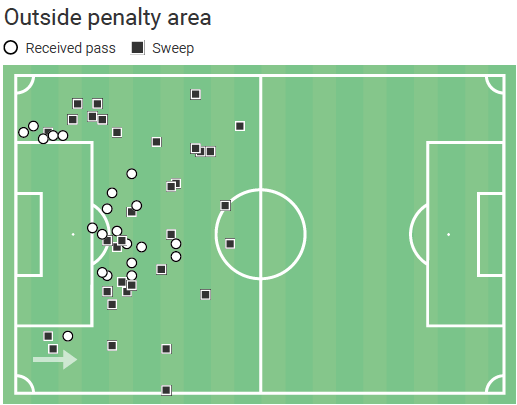 In the map above we can see just how often Raya plays outside his box. Whether it’s receiving passes or sweeping up. Some of his sweeps are ridiculously high up the pitch, showing just how confident he can be. He has 6.14 recoveries per 90, the second-highest in the league.

Using his aggressiveness to counter-attack

Raya has 1.46 actions per cross against and 0.67 actions per set-piece against – showing he likes to come off his line to take the pressure off his defence. He’s very aggressive off his line meaning his ability to come and claim crosses is very effective.

In the above example, in the play-off semi-final, Raya is instrumental in Brentford’s first goal. He comes out aggressively to take the corner and immediately looks to get his team on the attack. He quickly spots his teammate in plenty of space on the right and throws an accurate pass to him. Raya getting a second-assist here.

Raya has the highest xG buildup value by a long way in the Championship with 9.49. This stat shows just how much and how often he contributes to Brentford attacks.

However, he tends to force passes to create counter-attacks. Luckily, because his team is so good defensively, this hasn’t led to any goals this season. The map below shows how many throws he’s incompleted. His throws are rather ambitious, but when they come off they often lead to a dangerous counter-attack. 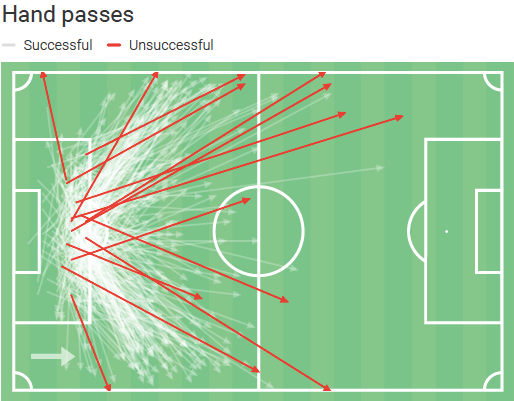 This scout report has proven that Raya has certainly been one of the best goalkeepers in the Championship this season, and is one to look out for next season. Raya’s shot-stopping is often overlooked because of his good modern passing and positioning, the same as Manchester City’s Ederson. His ability on the ball and to read when he needs to recover the ball for his team is invaluable. With Brentford in the play-off final, there’s a good chance that we’ll see him in the Premier League next season. However, if Brentford fails to gain promotion then there’ll certainly be a lot of clubs looking to bring the young Spaniard in.