Bruno Fernandes has been linked to just about every top club in Europe in the last few months and it’s easy to see why. The Portuguese attacking midfielder has enjoyed two stunning seasons in Lisbon since joining Sporting in 2017. Now, after 44 goals and 35 assists (at the time of writing) in his two seasons at the club, Bruno Fernandes has been repeatedly linked to Manchester United. This tactical analysis will examine how the midfielder would fit into Solskjær’s team.

Solskjær has had to deal with a lot of injuries in midfield positions during his reign so far which has seen United alternate quite a bit with their formations. He started off with a very attacking 4-3-3, has used 4-4-2 and 3-5-2 in other games while often turning to 4-3-1-2 in tough away games.

One of the most interesting tactical ideas he’s implemented in some games is the attacking rotations when starting in a 4-3-3. In these games, United have often changed into a sort of 3-2-4-1 in attack with one of the full-backs playing narrowly and the other maintaining width. The wingers have performed the same roles with one staying wide and the other coming inside. This has created the shape shown below. 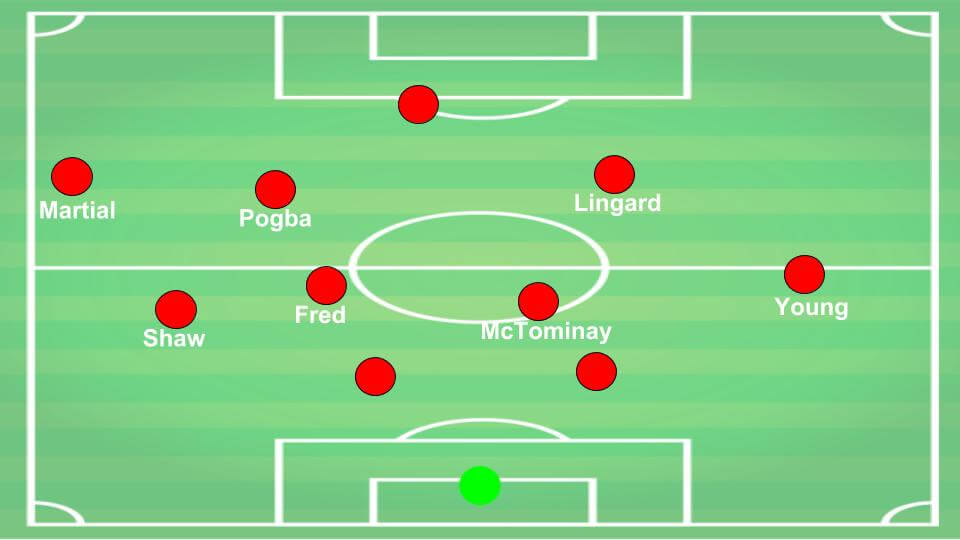 What’s clear from this analysis is that Solskjær places a greater emphasis on having players between the lines of the opposition. In fact, whatever shape he’s used, there’s always been one or two players performing the role of providing an option between the lines. Furthermore, Lingard and Pogba (who most often have performed these roles) have usually been stationed in either half-space.

This type of positioning was consistently absent under Mourinho as United often positioned themselves outside of the opponent’s shape. This is one reason why Fernandes would fit perfectly. As I’ll come to later, Fernandes is extremely effective between the lines with quick, creative passing and clever positioning.

There’s also a sense that Solskjær looks to implement a kind of 4-2-2-2 formation in attack. This has been seen in some games when Rashford and Lukaku have started up front together with both wingers coming inside to play in the half-spaces while the full-backs provide the width. Again, Fernandes would be able to perform this centred winger role well too. Now let’s look at the qualities he would bring to United.

The statistics highlight the all-round ability of Fernandes. He averages 3.1 key passes and 3.5 shots. Thus, he is a threat both with his passing and his shooting. His four goals from outside the box and three from free kicks highlight his shooting ability. His tally of 15 assists highlights his creativity.

By comparison, no United player has scored more than one goal from outside the box and the club has scored three free kicks all season. The 28 goals he’s scored this season demonstrate how dangerous he is in and around the box. Except for Paul Pogba, United sorely lack a goalscoring midfielder.

With the Frenchman’s future uncertain, adding another goalscorer to the midfield ranks is critical for Solskjær. There are, however, some other qualities that the midfielder has and United lack.

Effectiveness between the lines

Fernandes is excellent at identifying space between the lines and this is what makes him ideal for Solskjær’s plans. The below image highlights him receiving the ball between the lines in the left-sided half-space. From there, Fernandes can use his sublime passing to create havoc from inside the opponent’s defensive shape. 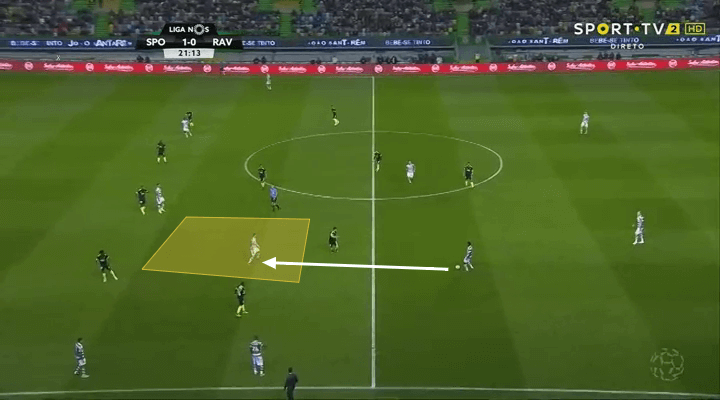 The image below is a good example of Fernandes’ quality between the lines. Firstly, he finds space in the half-space in the weak point of the opposition defensive structure. As the pass is made, the centre-back steps up to press him. Fernandes reads this situation quickly and plays a first-time pass into the striker (white) who can attack the empty space. 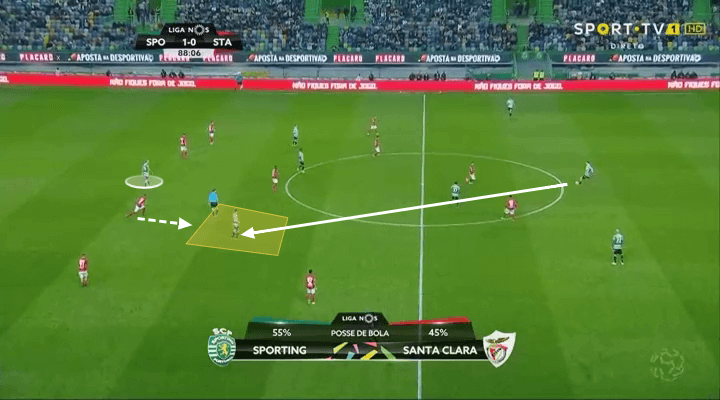 In the image below, Fernandes has just played a one-two with a teammate. As it draws the defenders out towards him, Fernandes slips the ball into the path of his teammate who goes on to score. 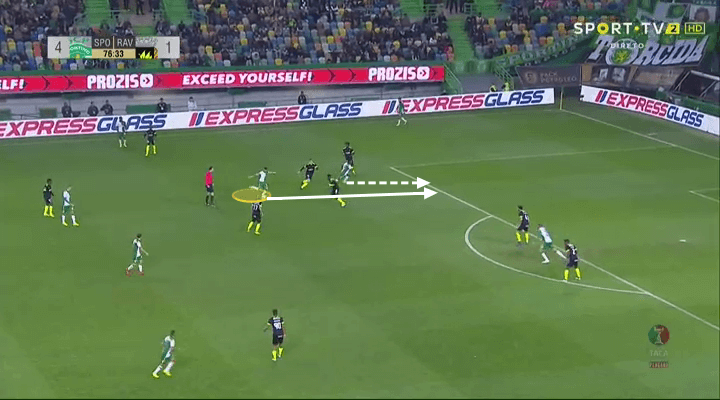 What these three images have shown, apart from his clever positioning, is how quickly Fernandes reads situations and creates chances with his superb ability in tight areas. His creativity and vision make him a fantastic attacking midfielder and would be assets to any team.

Fernandes would add an extra dimension to United’s possession play too. Pogba is a fantastic passer at his best, but the other United midfielders are often found lacking in this regard. Adding Fernandes to the ranks would help United speed up their passing to hurt opponents quicker. The image below highlights Fernandes identifying the weak point of Portimonense’s defensive shape before he sends a cross-field pass into the path of the onrushing teammate.

At United, only Pogba is capable of making these passes. With him often stationed on the left, where Martial keeps the width, it prevents United from giving the latter time to gather speed when attacking his full-back that the likes of Young are granted on the other side. With Fernandes joining Pogba in midfield, their ability to release both wings early would help them improve as an attacking team. 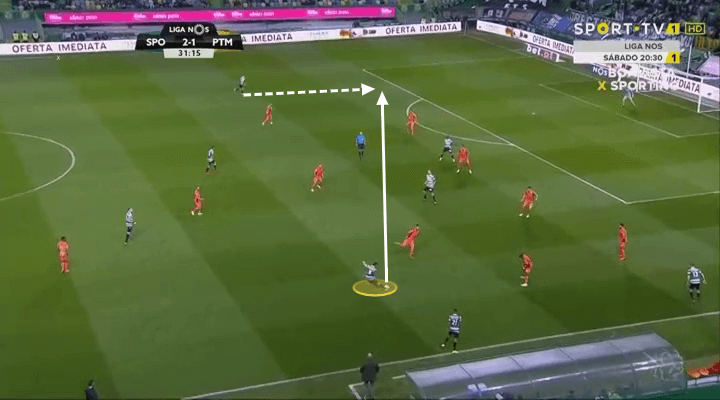 The player who would benefit the most from Fernandes joining would undoubtedly be Marcus Rashford. The striker has done really well under Solskjær but United could get so much more out of him if they could only involve him and his speed earlier. United have often chosen to drop deeper and look to hit opponents on the counter-attack under Solskjær. Thus, Rashford has a lot of space to run into.

But with the likes of Nemanja Matić starting attacks, Rashford rarely gets passes sent into his path early. Again, Pogba does this occasionally, but United need more than one creative passer on the pitch.

The two images below highlight how Fernandes could make Rashford shine. In the first image, he releases the ball early and his teammate is given plenty of time to run onto the ball and create a chance. 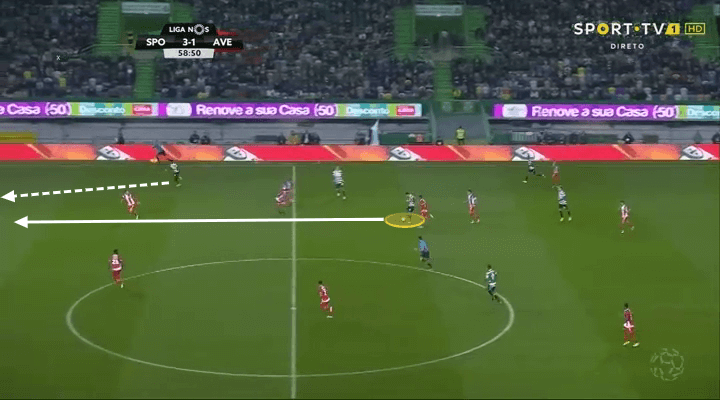 The second image highlights Fernandes’ vision as well as his stunning technical ability. Here he receives the ball and instantly releases the runner with a splendid outside of the boot pass. Imagine Rashford given this space to run into. We are talking about potentially an extra five goals a season just from situations like these. 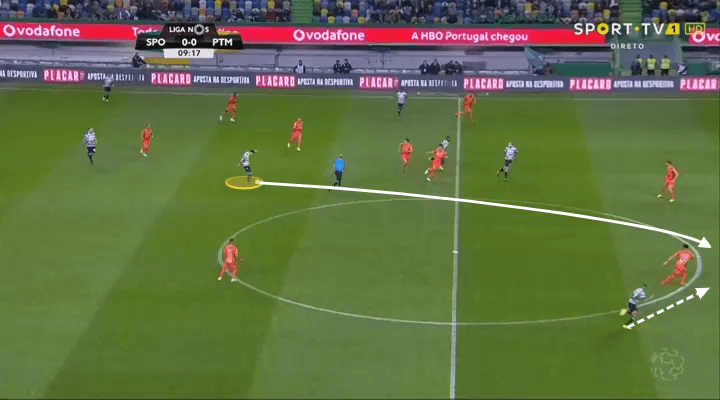 Fernandes’ passing would be a huge asset to United and would improve their attacking play tremendously. And then there is his goalscoring. Twenty eight goals is a fantastic return for a player in central midfield. Apart from his tremendous shooting ability, Fernandes scores a lot thanks to clever movement into the box. Let’s look at this below.

When Manchester United attack, the likes of Rashford and Lingard always make deep runs. Apart from them, however, very few do. Fernandes would change this as he happily makes deep runs when the opportunity presents itself. The image below highlights Fernandes making a run in behind the defensive line. These types of runs are very difficult to defend against and are usually very effective. 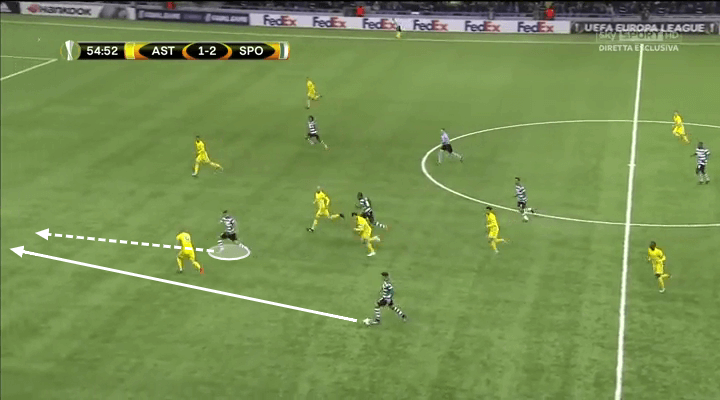 The image below highlights a different type of run. Here, Sporting play the ball intricately just outside the box. As one centre-back is attracted to the striker, Fernandes makes a run in behind the defence. The ball is played through and the midfielder scores. If he were to link up with the likes of Pogba and Lingard, his understanding of when to make runs in these situations would make United very dangerous. 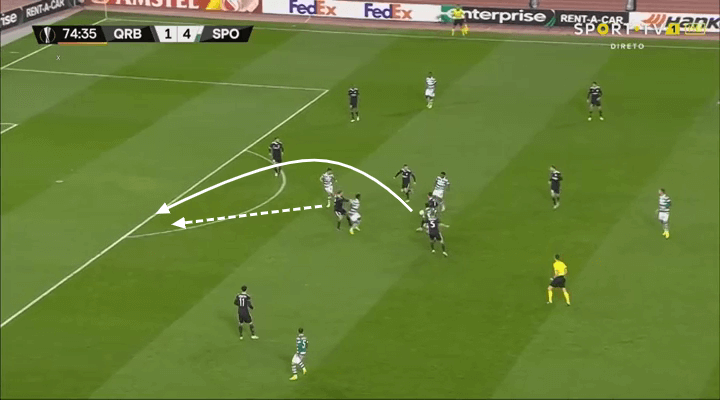 Finally, Fernandes has also mastered the classic Paul Scholes and Frank Lampard trademark run of arriving just outside the penalty area when teammates advance down the line. This opens up the possibility of cut-backs, and with Fernandes’ shooting ability his timing in these situations makes him a huge threat. 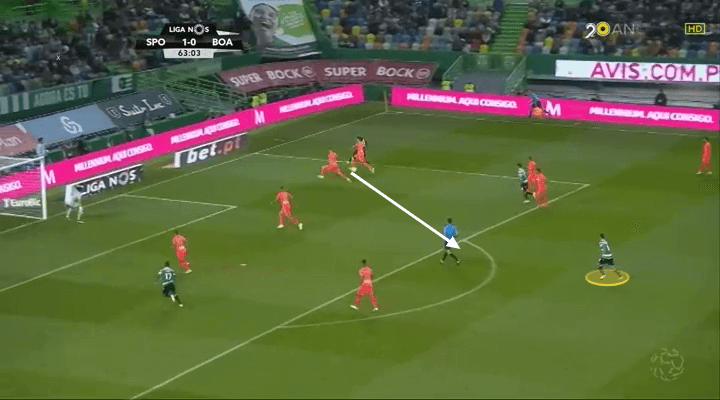 If Fernandes were to join United, he would either replace Pogba or probably join Pogba as part of a midfield three. A setup similar to the one below could be an option. He would then line up in the same position he has this season for Sporting. United would be a lot more attacking, but would still retain the defensive balance since both Fernandes and Pogba can contribute a lot defensively.

As mentioned, though, Fernandes could also be used in a narrow 4-2-2-2, a 3-2-4-1 or any other attacking midfield role. Even if no other midfield signings were made, United would be a stronger team next season with the Portuguese in the squad. 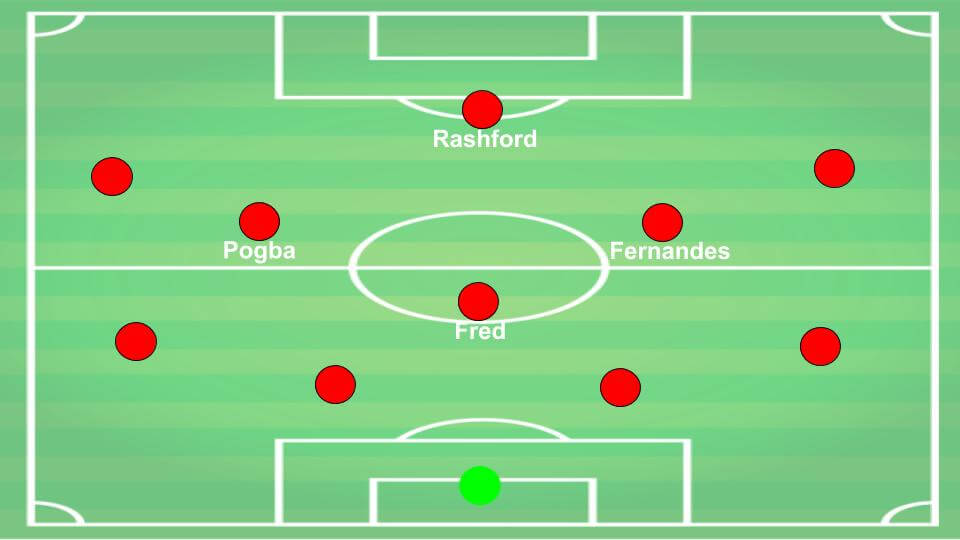 Bruno Fernandes is an extremely talented attacking midfielder and the 24-year-old looks set for a very bright future. Manchester United should fight hard for his signature in the summer as he would be a huge upgrade to their midfield options.

At around £50m, Fernandes represents good value for money too. He would improve their possession play, help the likes of Rashford to shine and prove a good replacement for Pogba if he was to leave. If not, those two together in midfield would make United a vastly improved side going forward.