With Juventus winning their eighth consecutive Scudetto with victory over Fiorentina, attention in Serie A now turns to who will claim a Champions League spot. Napoli are now just five points away from confirming a return to the Champions League, and they faced Atalanta who have been the surprise package this season in Italy. In this tactical analysis, we look at how Atalanta have increased their chances of playing in Europe next season. 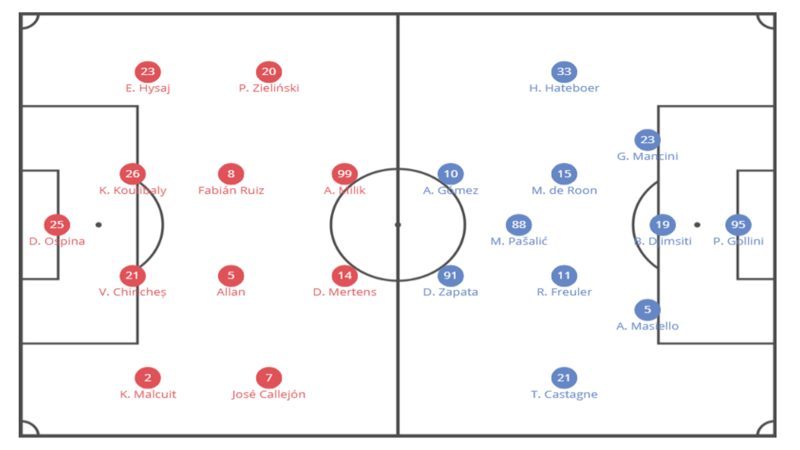 Carlo Ancelotti’s Napoli set up in a 4-4-2 with Dries Mertens and Arkadiusz Milik as the front two. Highly-rated centre-back Kalidou Koulibaly partnered Vlad Chiricheș at the back. However, after 13 minutes Chiricheș was replaced by Sebastiano Luperto.

Atalanta played with their usual three at the back with Gianluca Mancini, Berat Djimsiti and Andrea Masiello starting. Highly rated Dutch defensive midfield Marten de Roon played in midfield with the combination of the physical Duván Zapata and the pacey Alejandro Gómes up front.

How Napoli were the dominant side in the first hour 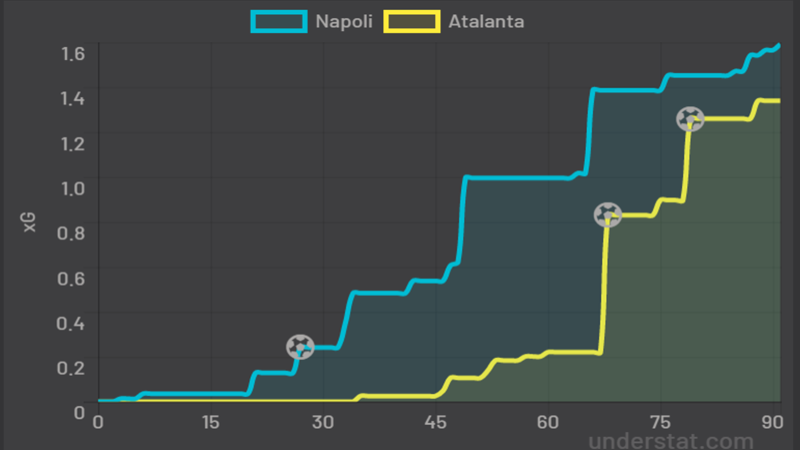 To begin with, the Napoli press was superb as they tried to squeeze Atalanta high and wide up the pitch. Below Atalanta’s Timothy Castagne takes a negative first touch back to Pierlugi Gollini, whom he received the ball off. This is the perfect trigger for Kévin Malcuit to go and press Castagne.

His press is backed by his two Napoli teammates which led to Castagne having no passing lines to play the ball. This meant that Atalanta struggled to play out from the back leading to them being more direct.

The problem about this was the outlet, Gómez, is only 5’4″ and is unlikely to win an aerial duel against Napoli defenders such as Koulibaly who is a foot taller. The other problem when going direct is the space between the lines of Atalanta. Even if the ball had fallen kindly for Gómez there were still no support options available for him to play to. Hence Napoli easily won the ball back and starting another wave of attack.

The space between the lines of Atalanta were also an issue whilst defending. Below Fabián Ruiz is in the middle of Atalanta’s shape and is aware of De Roon pressing him. Fabián realises that the run of De Roon will create space between him and the defence. He quickly turns into this space before De Roon can slow down. Once he enters this space he can then attack the final defensive line with the help of the attackers.

This space between the lines was a regular occurrence in the match but Atalanta were aggressive to close it down. The problem was it meant defenders were dragged out of position leaving chances for Napoli to exploit spaces and create overloads.

Below José Callejón finds a pocket of space and he is closed down by Masiello. However, Fabián – who originally made the pass to Callejón – makes a run pass Masiello and in behind the Atalanta defence.

Also, the Atalanta defence was far too deep and disorganised at times. Below Masiello is playing Milik onside. Milik flicks the ball to Piotr Zieliński, who beats Masiello for pace as he turns to have a one-on-one chance with Gollini. The two other central defenders should also be deeper and not on the same line. As they are on the same line, a ball can split the two of them with ease and take them out of the equation.

Napoli had many opportunities from central areas, but due to the compactness of the Atalanta back three they struggled to score. It was from wide areas where they caused more of a threat. Mertens played in a front two with Milik but often drifted out wide.

The below xG map for Mertens shows that most of his efforts came from the left-hand side, except his goal which came from a run from the right-hand side. The chances he had led to an individual xG of 0.65 with only Zapata having higher, despite his goal valuing a 0.61 xG.

In the below example, Mertens picks up the ball from the left wing and decides to cut inside with a dribble. When playing against some of the best dribblers in world football, as a defender you just have to delay him and prevent him from going forward. This is not what Atalanta did and they were too aggressive when trying to win the ball back. This helped create space for Mertens to cut inside and have a chance on goal.

But it was the width that Mertens helped create with full-back Malcuit which led to the opener. When Malcuit receives the ball, Mertens makes an arching run in behind the Atalanta back three. Due to his pace and the width of the back three, the defenders could not block it out.

How did Atalanta turn it around?

In the second half, Atalanta looked a lot more likely to score. However, Napoli were compact and were very hard to break down. If you refer back to the xG graph from above, Atalanta only had an xG of 0.22 up until Zapata’s equaliser. The compactness of Napoli made it very hard for Atalanta to have a decent central opportunity at goal.

To break down the Napoli compactness it required great combinations and an overload of the wide areas to get behind the Napoli defence so they could set it back. Hans Hateboer and Josip Iličić create an overload against Elseid Hysaj on the left hand-side. Therefore, a one-two between them leads to Hateboer having the ball on the byline.

When Hateboer receives the ball on the byline Zapata makes a run near post to tap the goal away. However, you have to question the body positioning of Luperto who has eyes only for the ball and does not see the run of Zapata. If he had held a better body position and been part of a better defensive triangle, then he could have cut out this pass.

Just 10 minutes later Mario Pašalić got the winner for Atalanta. This time Napoli were guilty of leaving too much space in front of their defenders as Napoli pushed to get a winner. This was exploited by Iličić who ran into this space and played it into Zapata.

Atalanta got three vital points as Gian Piero Gaspeirini tries to take them to the UEFA Champions League. The win takes them to fifth position behind Milan due to their head to head record. Their next game in the league is Udinese, but after they face Fiorentina in midweek to fight for a place in the Coppa Italia final.

For Napoli, their season is coming to an end. Defeat to Arsenal means there will be no trophy this season for Ancelotti. However, they still need five points to confirm entry into next season’s Champions League, which they can do with wins over Frosinone and Cagliari.