As the most expensive winter singing in 2020, Manchester United managed to complete their signing of Bruno Fernandes instead of Tottenham at a price of 55m Euros. The new No.18 of quickly started just a day after he signed in the game against Wolves, and he was one of the most eye-catching players on the pitch.

In this tactical analysis scout report, we will show you the tactics of Fernandes’s playing style and role in his United debut.

In the first half, Fernandes started as an attacking midfielder, playing behind Anthony Martial. However, he was not a traditional attacking midfielder who was stuck at the centre (zone 11 and 14). Instead, he preferred to overload the wide-area with his teammates.

Below is the pass received map of the former Sporting CP man in the first half. He received 40 passes from his teammates and apart from the 11 that occurred in his own half, he also received 17 passes, (nearly half) on both flanks. As mentioned in our match analysis, he made things simpler, allowing his team to attack flanks with more creativity and inspirations.

Below is an example where there are two points worth mentioning. First, the three attacking players of United, Juan Mata, James, and Fernandes, all came to the left and stayed close. They created a passing triangle to play quick combinations down the flank, progressing the attack.

Another point to note was the smart positioning of the Portuguese international. When Mata sprinted between Diogo Jota and Matt Doherty, Fernandes was slightly dropping back. This movement had two benefits.

First, he created another possible passing option for James, if the young Welshman was unable to find Mata. Second, in case the other two lost the ball, Fernandes could counter-press Raúl Jiménez instantaneously. 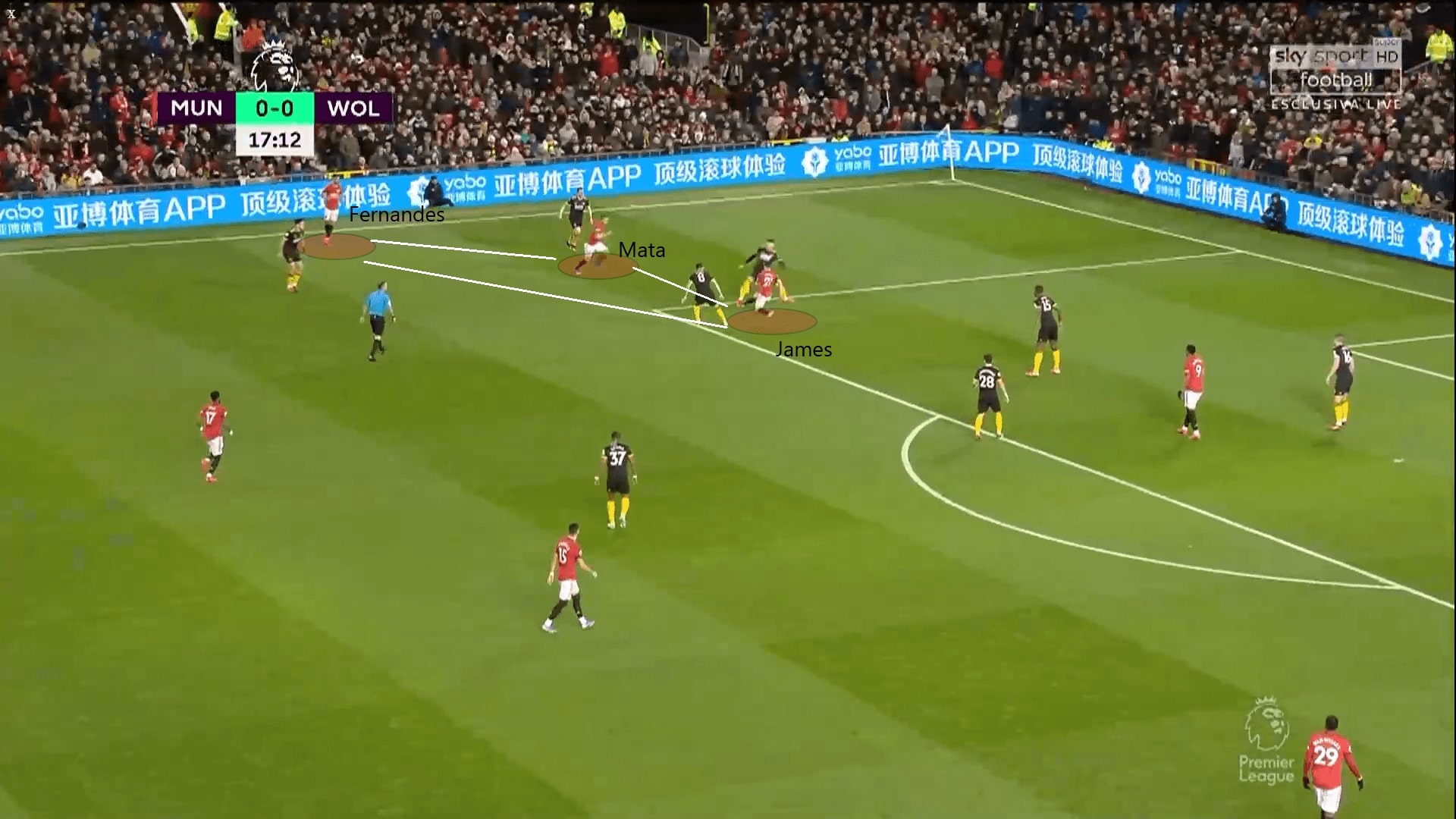 Fernandes also showed his capability to rotate the position with his teammates. When Martial left the frontline to join the attack in other areas, Fernandes would take the Frenchman’s position, as he did in this example.

Given United’s struggles in the attack and the compact block of Wolves, they could hardly access Wolves’ box, hence why Fernandes did not record any touches inside the box.

However, the ability of Fernandes to switch position with his teammates could possibly give more options or ways in United’s attack. 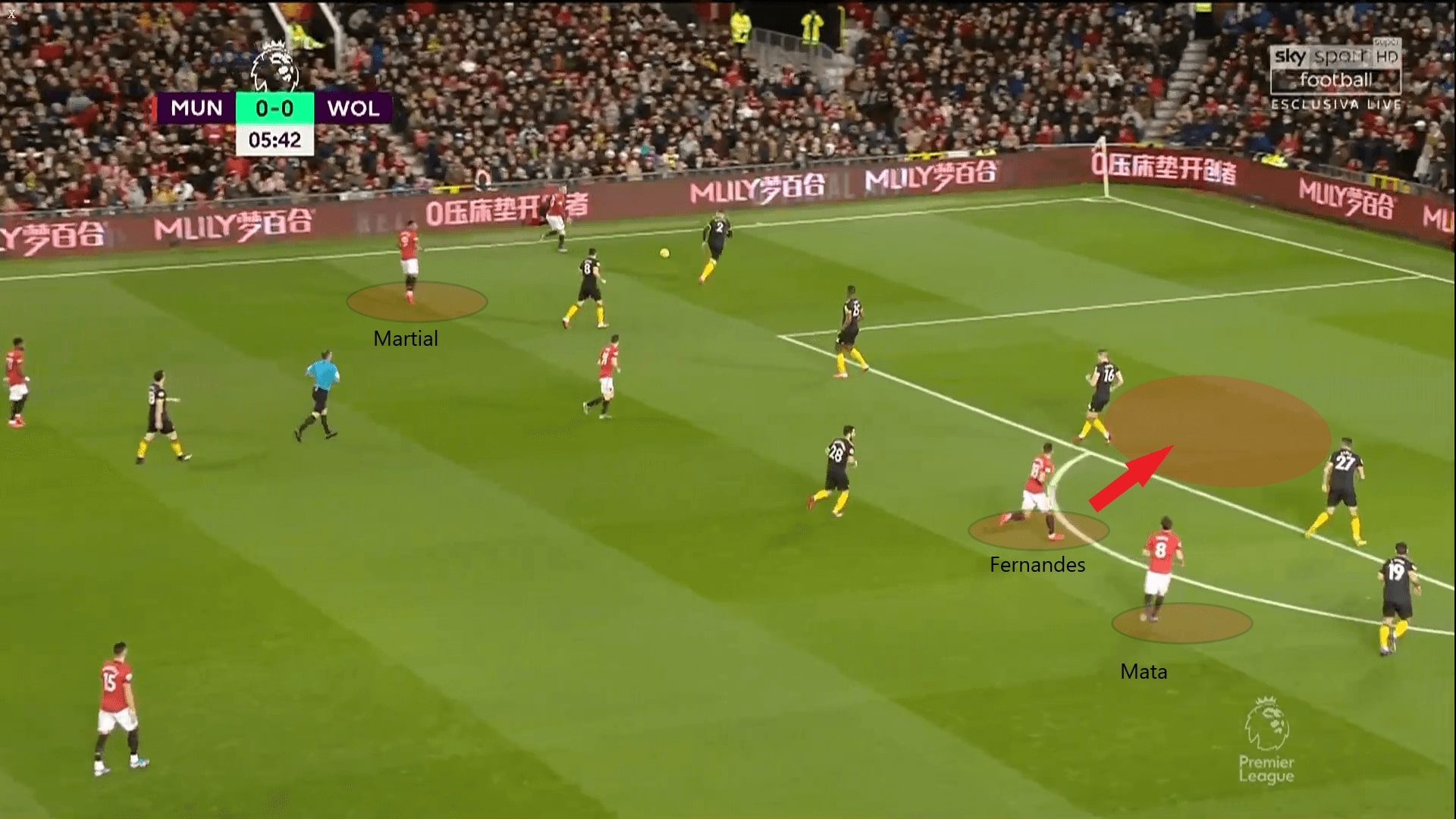 In general, Fernandes is a good passer. By statistics, he made 78 passes, completed 64 of them (82%). In those passes, all 10 progressive passes successfully found a teammate; he had 13 successful passes out of 18 to the final third as well, more than any of his teammates.

Fernandes showed that he was a clever passer, brave to try some risky passes. He was also good at playing forward passes, managed to complete 21 out of 31 in this game.

He could recognise the space between players so he was playing vertical passes to find his teammates, even within the block.

In this situation, he could have played to Aaron Wan-Bissaka, a more comfortable option on the side. However, the Portuguese international identified the gap between Wolves players and the movement of Mason Greenwood so Fernandes passed into the block of Wolves.

The arrival of Fernandes could improve United’s ability to penetrate through the centre, especially when facing a low block. 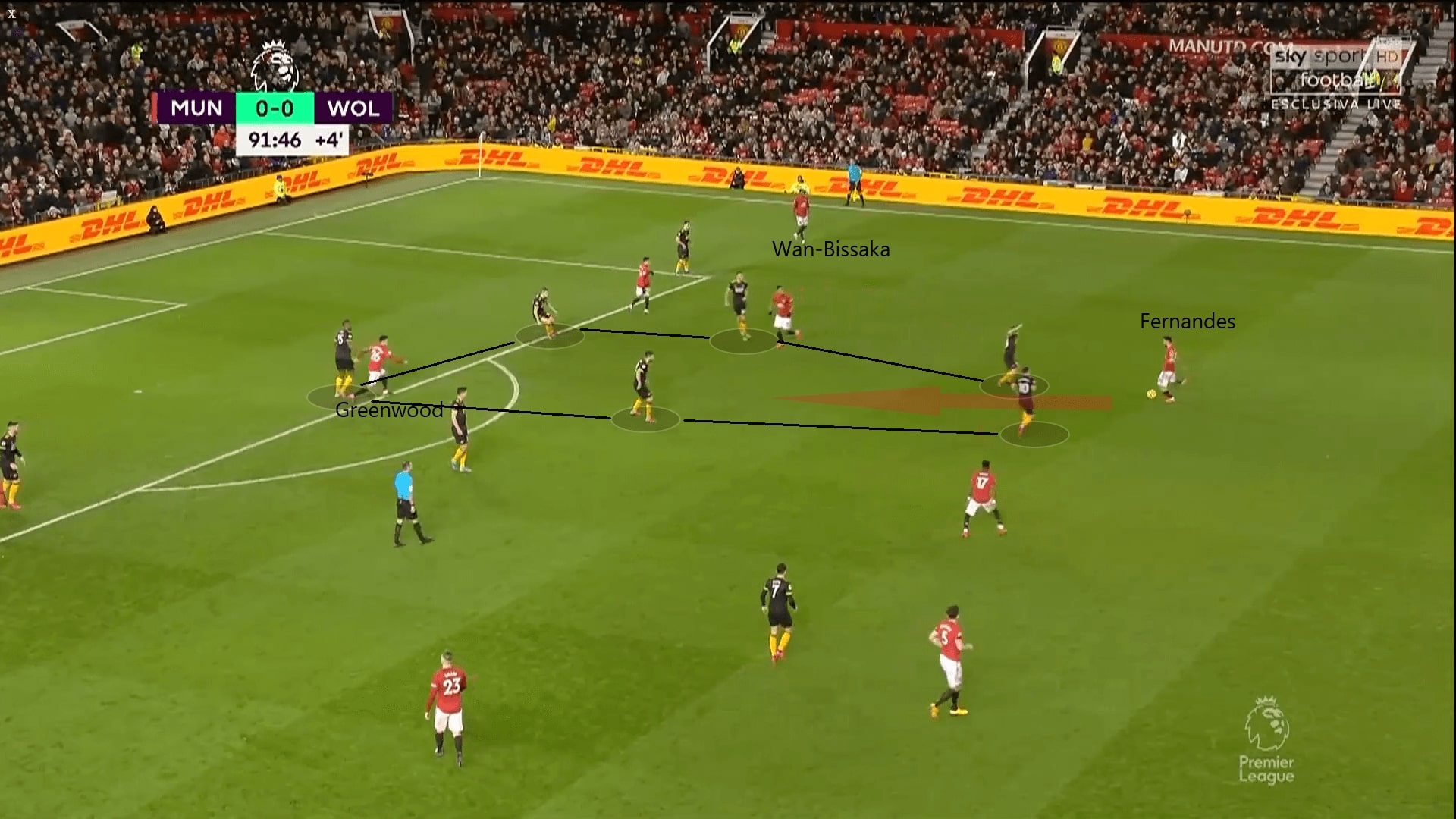 This example reflected Fernandes’ ability to read the game. He switched the ball to the weak side when a free player dropped, Martial in this case.

On the ball side, six Wolves players formed a block to deny the penetration and overloading of United. Although players on the ball side or Fred were some closer options, Fernandes still played the ball to Martial.

It was a pass that switched the focus of United’s attack in an instant, eliminating those six players of Wolves on the ball side. On the weak side of Wolves, Martial continued the attack by passing to Luke Shaw, allowing the left-back to comfortably cross into the box. 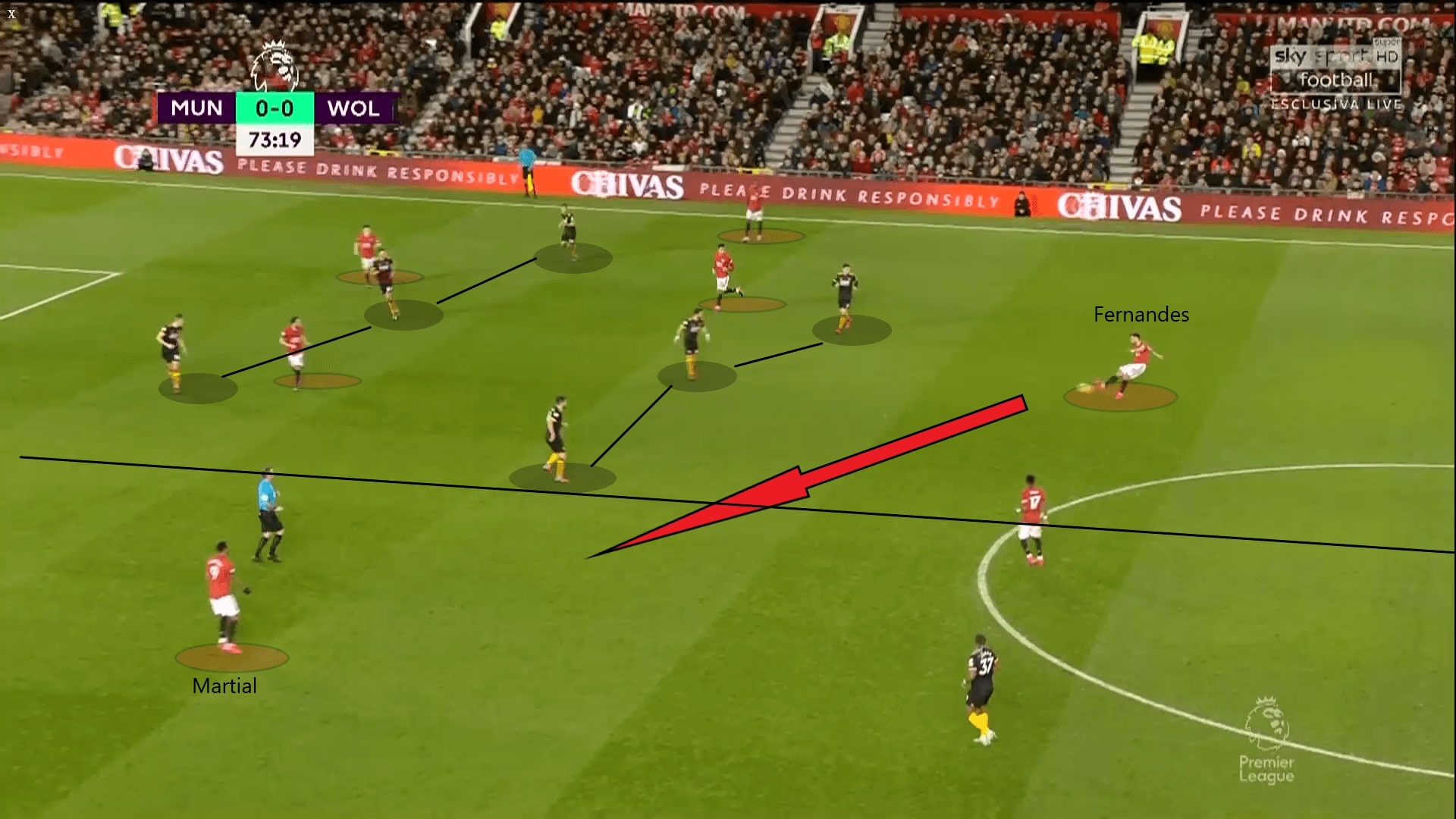 Fernandes was an ambitious passer, and with his technique and passing skills, he could still pick his teammates under pressure.

Below was an offensive transition of United. Fernandes was under the pressure from João Moutinho while Rúben Neves covered James. On this occasion, Martial tried to drop and support.

In this case, Fernandes first used a body feint (with his body facing James’ side), let the opponents believed he was chipping the ball or lofting the ball to James. Then, he quickly used the outside of his boot to pass the ball to Martial. 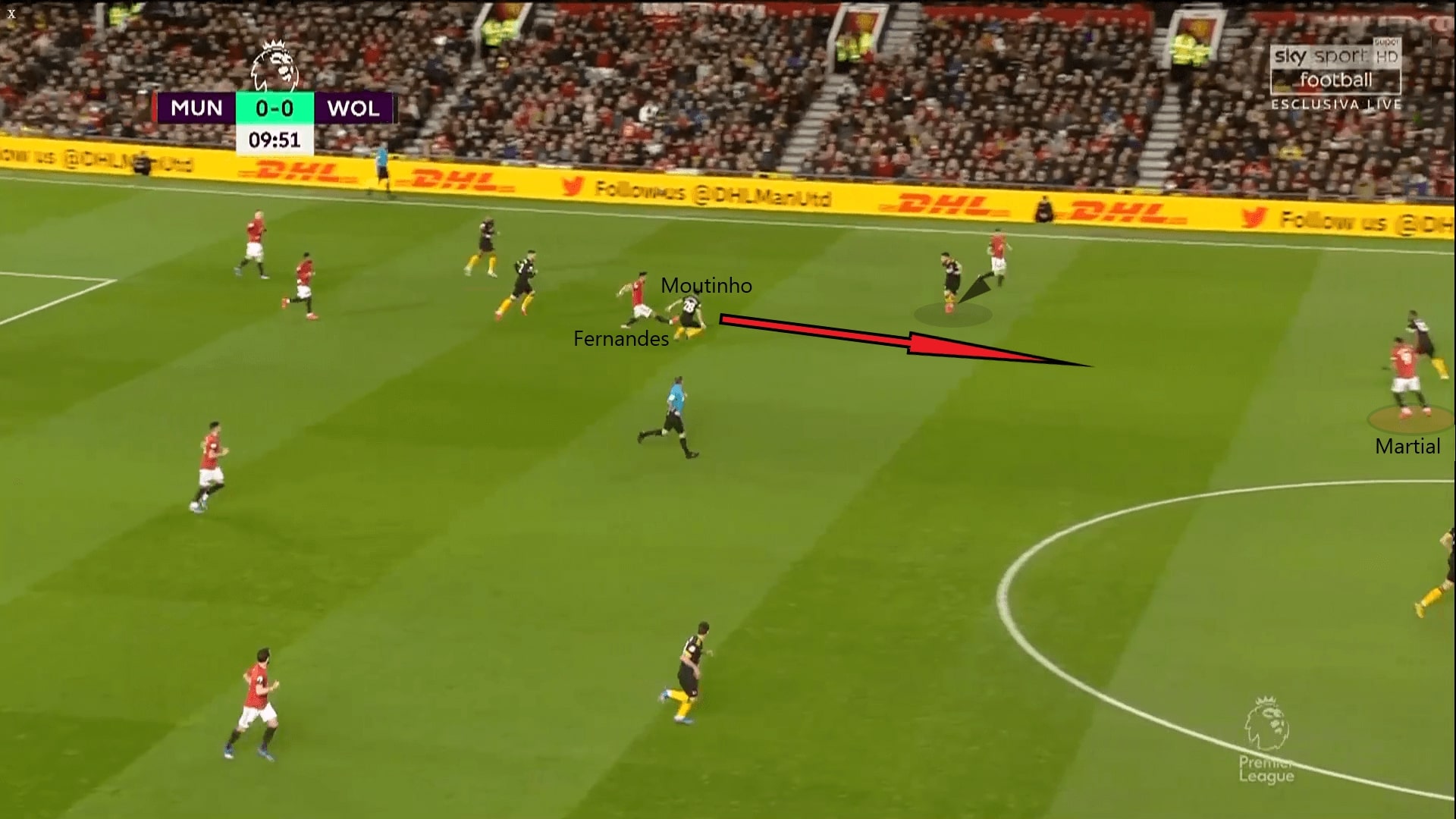 Apart from the passing ability of Fernandes, the 25-year-old midfielder was an enthusiast to shoot outside of the box. In his debut, he had an xG of 0.22, coming from five shots out of the box, with three of them on target.

The below graph showed the directions of shots from Fernandes. As you can see, he even attempted them at the outside of the box where the shots were aiming at the corners.

It is possible to see Fernandes bag some goals with his long drives at United in the future.

When facing pressure from the back, Fernandes was able to protect the ball, by separating it from the opponents with his body.

In this scenario, Jota tried to steal the ball from Fernandes. If the former Sporting CP man lost the ball in this position, Jota and his teammates were in a favourable three v two counter-attack. Then Wolves could possibly reach the exposed United defensive line.

Fernandes was calm, balanced his body, and more than that, he turned to the right and passed to Wan-Bissaka. United continued the attack. 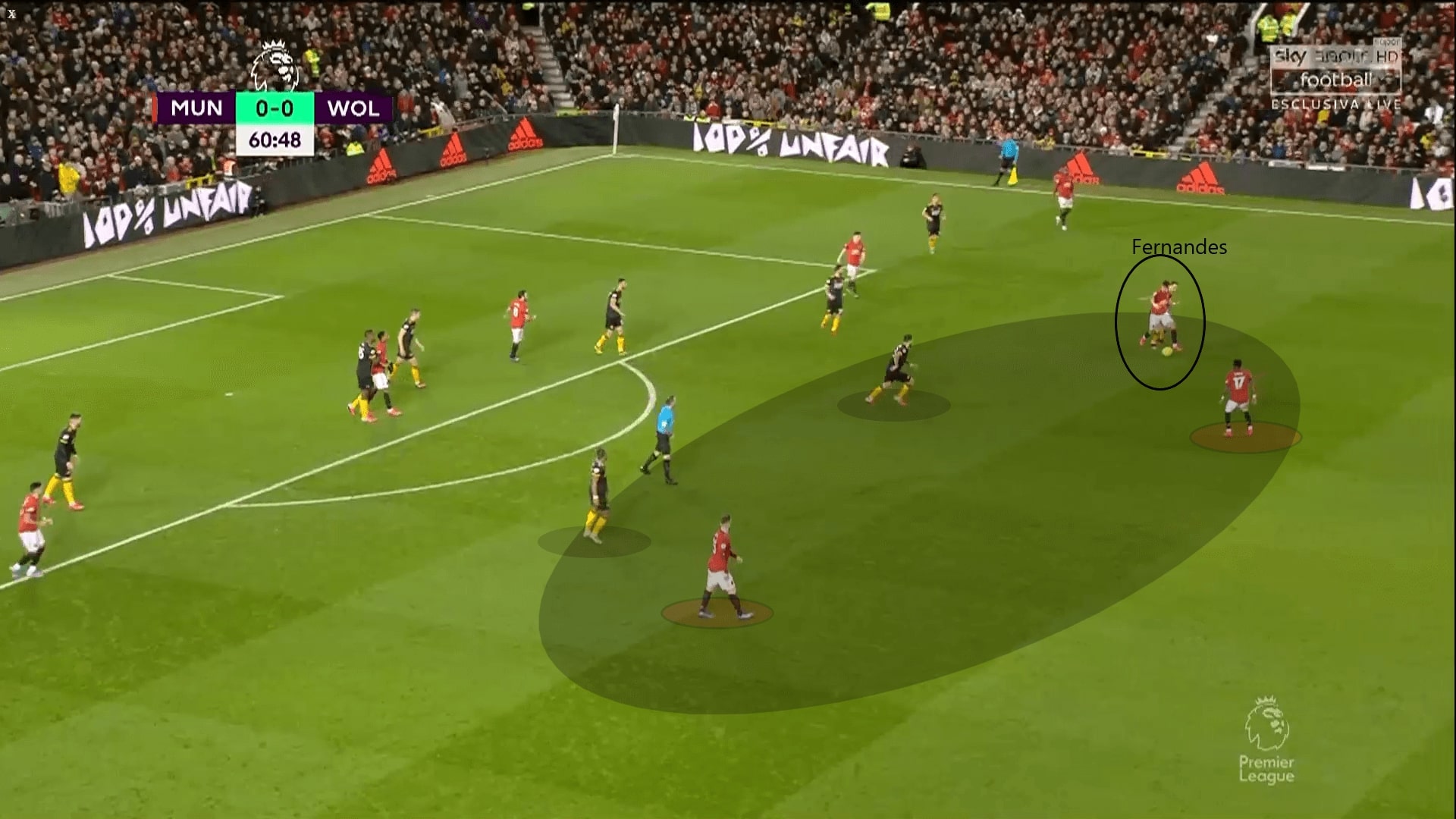 Below was another example, United just regained the ball, turning from defending a transition to starting another one. In this case, Fernandes retrieved the ball and turned at the same time, also facing the counter-press of Jota.

He was calm, continued to separate the ball from Jota with his body, and earned a foul for United. Though it was his first game in the Premier League, he showed good resistance to deal with pressure from his back. 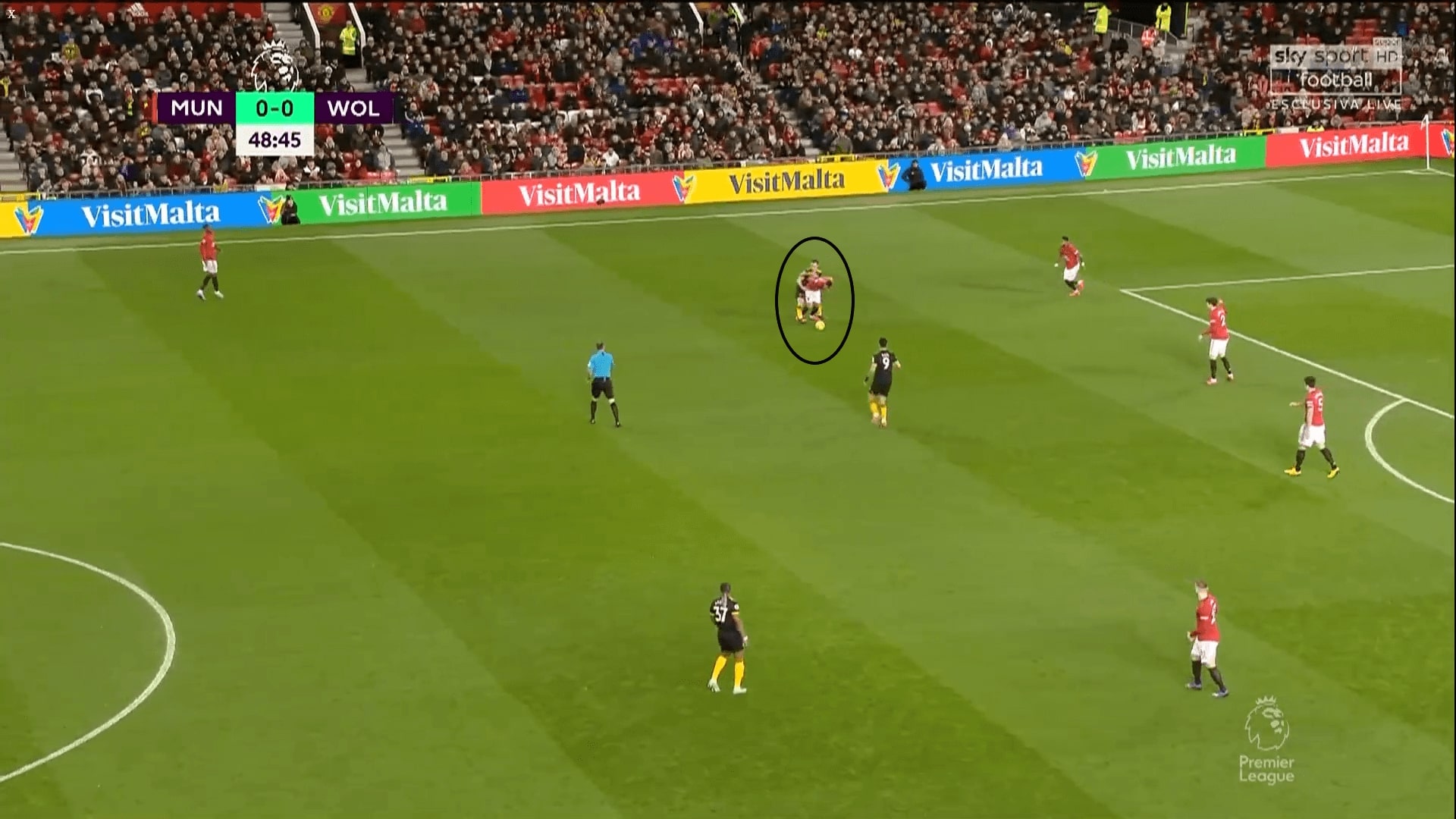 As a defensive midfielder

In the second half, Ole Gunnar Solskjær made some tactical adjustments. One of them was the change to Fernandes’ role who dropped to play as a defensive midfielder, partnered with Fred.

Below is the heat map of Fernandes in the second half, where you can see he still appeared in the half-spaces to support his teammates. Partly of the reason was Fred’s heavy involvement in the attack of United. It gives us a hint that the Fernandes could be exploiting the half-spaces for United in the future.

Also, when Wolves were defending deeper, Fernandes had more chances to appear at the centre. When he was playing as a defensive midfielder, he served as an outlet, receiving the ball from the left, moving it to the right.

Below was the pass received map of Fernandes in the game. He received some passes at the centre, and on most occasions, he tried to switch the attacking focus to the right flank.

Defensively, Fernandes was not the best option as a pivot. His physical qualities did not allow him to win many duels, as he just won one from his six defensive duels. Partly the reason was his fatigue, but the other part was his lack of aggression when challenging the opponents, though it was conceivable as he was booked at the 55th minute.

For the battle in the air, in Solskjær’s tactics, this was the job of the centre-backs. Harry Maguire and Victor Lindelöf would deal with the long ball for most cases. Then, the task for the pivots would be picking the second balls.

Of course, as usual for new players in the Premier League, they had to pick the second ball better. For example, on this occasion, Lindelöf managed to win the header but Fernandes was unprepared for picking the second ball and gave the ball away, despite there being space around him. 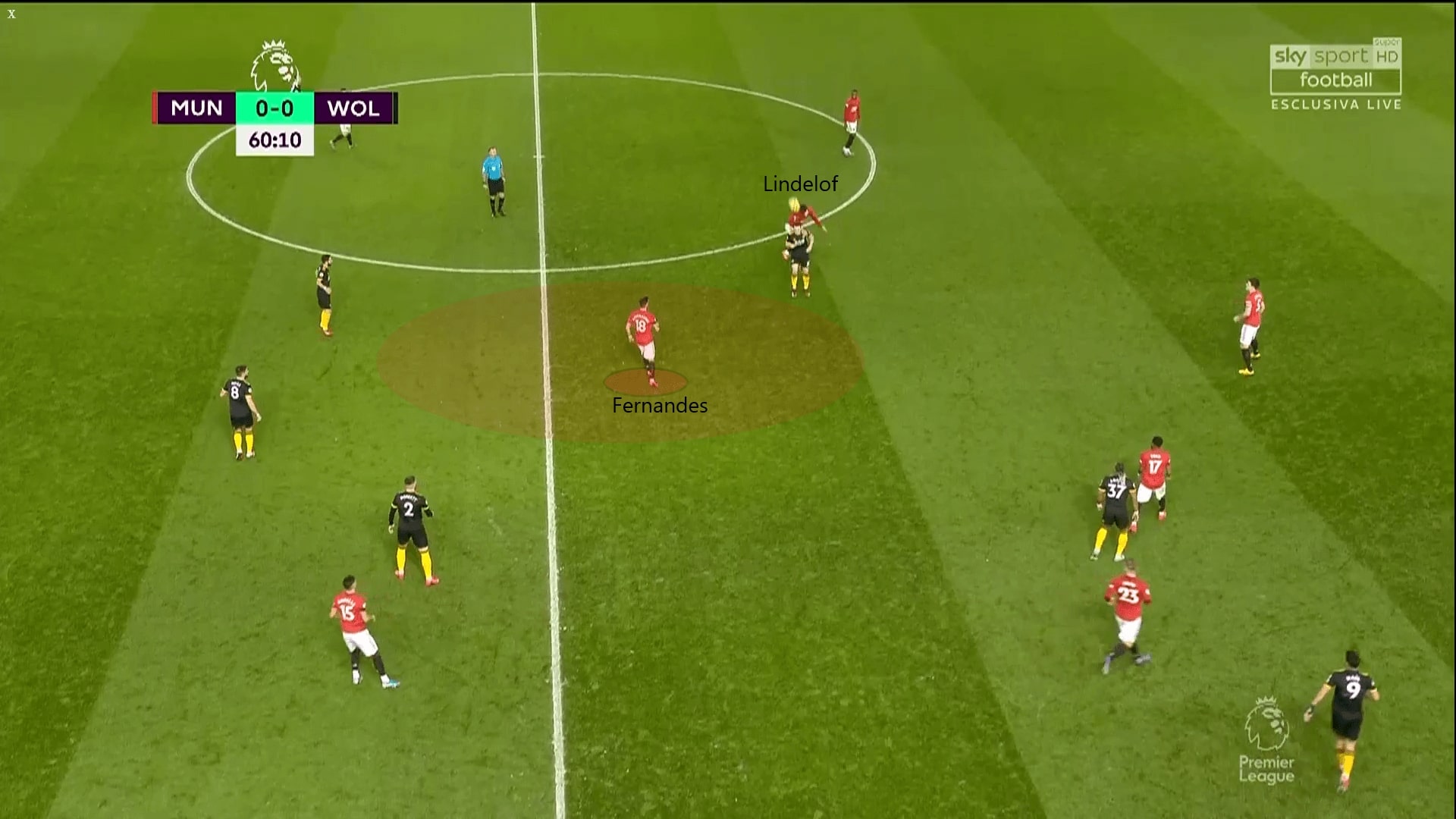 To sum up, it was not the best debut for Fernandes, and it is still too early to judge the new signing of United yet. In this game, he showed his strengths and versatility that could enhance United’s attack in the future, especially when they are dealing with a stubborn defence.

It still takes time for the manager and his teammates to get familiar with Fernandes, but this would not be a difficult process for the Portuguese international, as he was good at communicating on the pitch (he instructed the movements of his teammates several times), and we have to remember that he was the captain of Sporting CP.

As for how Fernandes will be able to deal against the other teams in the league, we will see in the coming games.