After clashing against resolute low-blocks in his first two league games, Quique Setién must have enjoyed the opportunity for a more open game.

With Levante unwilling to sit back and defend in the low-block for 90 minutes, Barcelona encouraged Paco López’s to push high up the pitch. The result was an end-to-end match that finished in a 2-1 at the Camp Nou. With the victory in hand, the Catalans maintained their distance from Real Madrid at the top of the La Liga table.

In this tactical analysis, we’ll get take a look at why this was such an open match. The analysis will address Levante’s high press, Barcelona’s building out of the back and the tactical tweaks Setién implemented after his first two games at the helm. 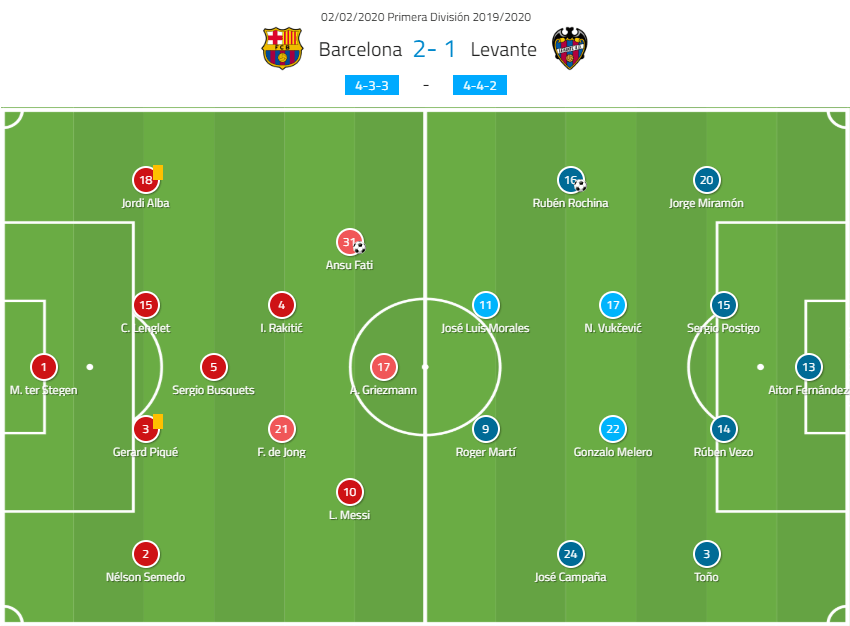 Setién’s side was lined up in a 1-4-3-3. Marc-André ter Stegen took his place in goal and was protected by Nélson Semedo, Gerard Piqué, Clément Lenglet and Jordi Alba at the back. Sergio Busquets started in his customary holding midfield role with Frenkie de Jong and Ivan Rakitic switching from their typical sides of the midfield. Up top were Lionel Messi, Antoine Griezmann and Ansu Fati.

For Levante, Paco López’s men played a 1-4-4-2. Aitor Fernández started in goal with Jorge Miramón, Sergio Postigo, Rúben Vezo and Toño in defence. In midfield, the away side started Rubén Rochina, Gonzalo Melero, Nikola Vukcevic and José Campaña. Rounding out the formation were José Luis Morales and Roger Martí in the forward line.

Unlike Barcelona’s previous two La Liga opponents, Levante decided to set up in a high block and counterpress Barcelona. While other teams, such as Real Madrid, have used this tactic to a positive effect, it left Levante vulnerable all match. As Barcelona played out of the back, Levante switched off between a man-marking scheme and a 1-4-1-3-2. While its central presence was in place, this tactic allowed Barcelona to find outlets on the wings. Without a defender or midfield there to track the runs of Semedo and Alba, Levante spent much of the game playing recovery defence.

One of the issues is that the high press was not paired with actual pressure. For the game, Levante averaged 20 PPDA (passes per defensive action). So while it pushed aggressively up the field, the ability to force a hurried action or poor technical execution was lacking. Even with the high press, the guests only managed 11 recoveries in the highest region of the pitch. By comparison, Barcelona had 23. This high press without pressure left Levante chasing play. Worse, it allowed the opposition to run at the backline without proper coverage. For the game, Levante faced 44 Barcelona dribbles, losing 31 (70%) of them. López’s defensive tactics did far more harm than good in this one, as the pressing intensity was severely lacking from his side. 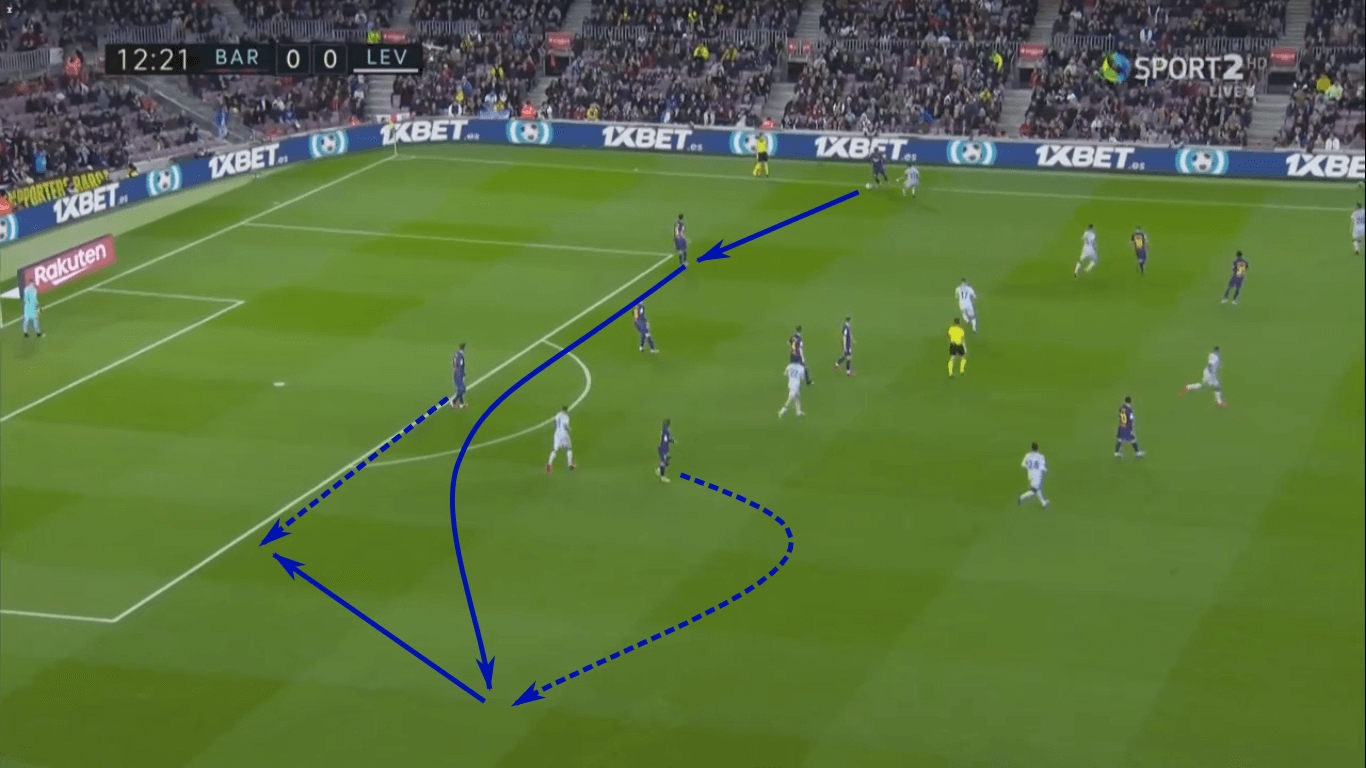 After a Barcelona recovery early in the first half, Levante initiated the counterpress and starting moving its pieces into place. The first pass was played negative to Busquets, who then switched play to Griezmann. Though the Frenchman was ready to move forward in the available space, Busquets’ pass forced him backward and slow the tempo of the attack. 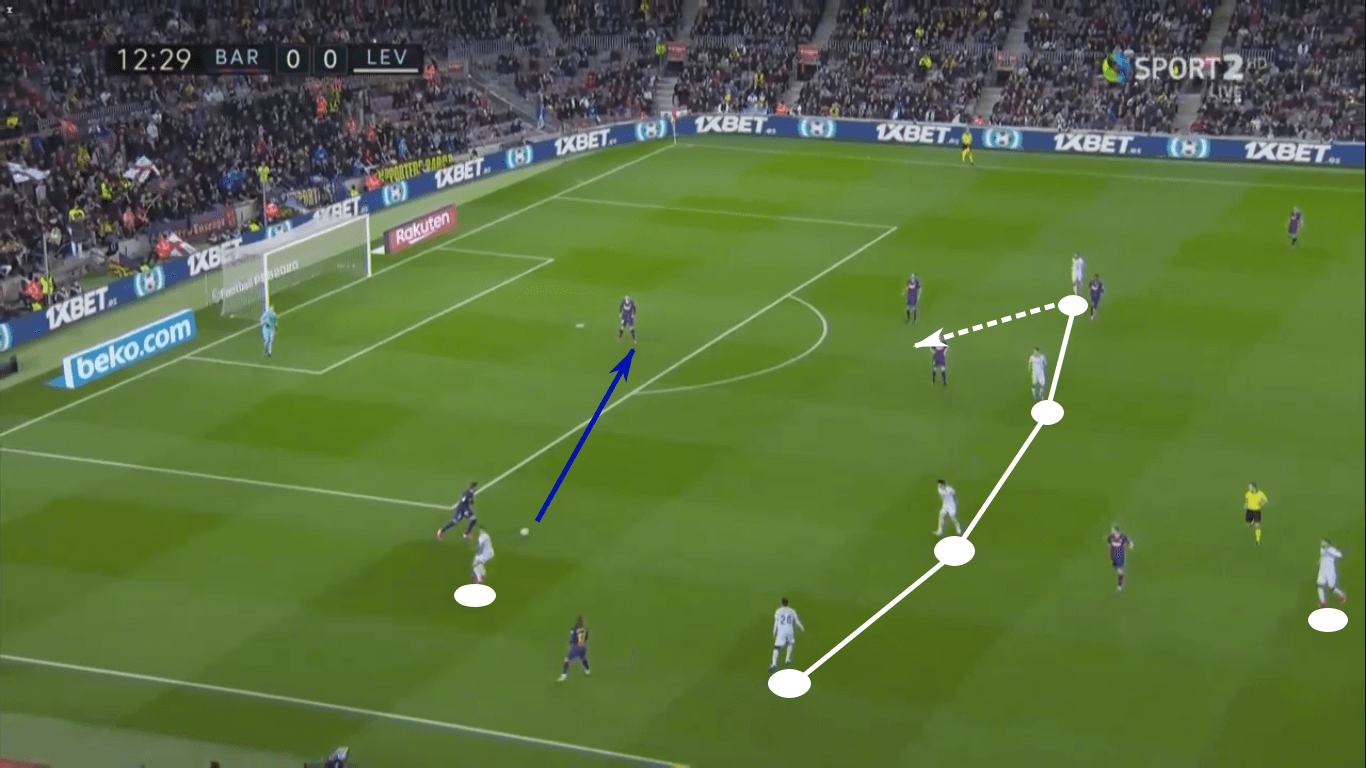 Griezmann’s pass to Piqué was under-hit, but the big-man made an excellent chop around the defender. Piqué played back to Lenglet, who held the ball long enough to force Levante to reshuffle its lines. 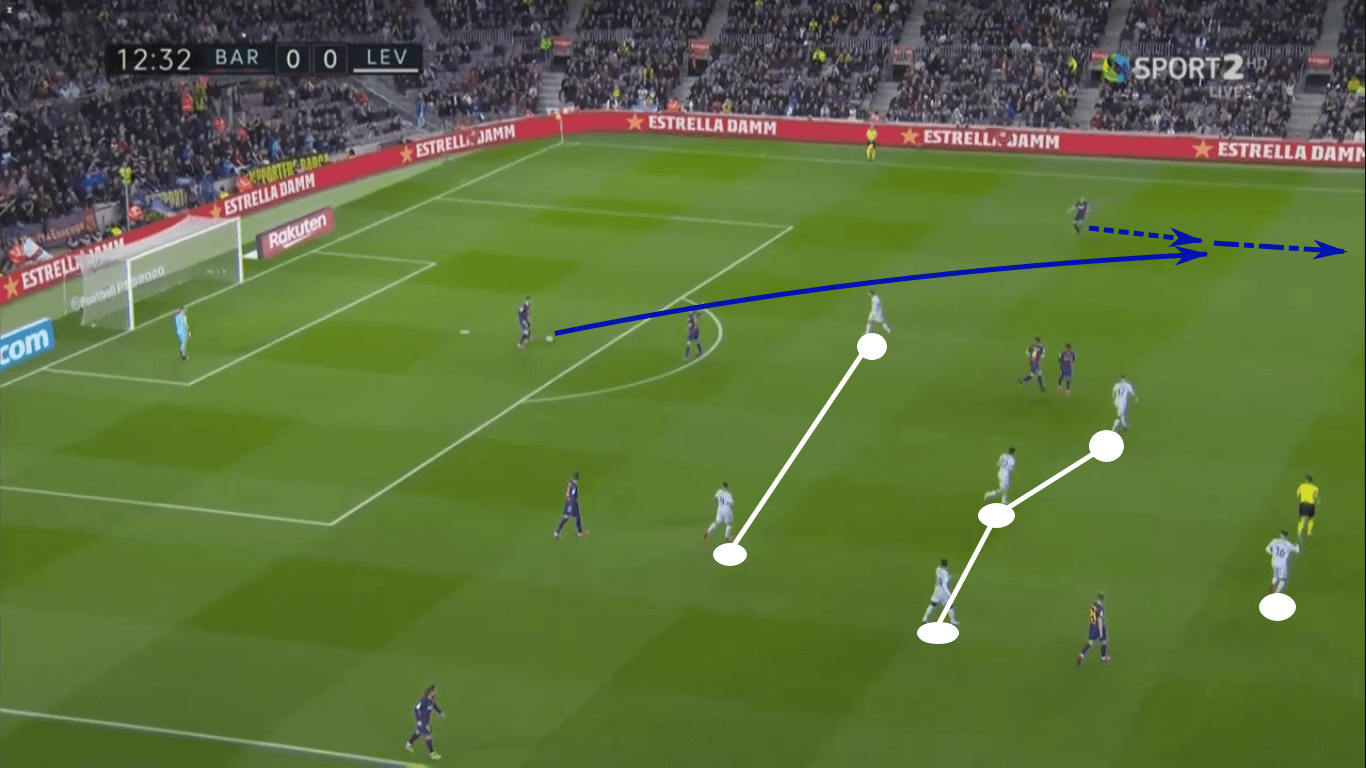 Rather than pressing in a rigid 1-4-4-2 while occupying three vertical channels, Levante frequently settled into a narrow 1-4-1-3-2. Defending in just two channels meant Levante spent much of the game retreating at a sprint to its own goal. In this instance, under the direction of Busquets, Lenglet played Alba into space and allowing Barca to run at the backline.

Barcelona success building out of the back

With Levante showing a willingness to press high up the pitch, Barcelona experienced some much-needed relief after the past two La Liga matches. Very early on in the game, you could see Barcelona identify Levante’s defensive intentions and make the appropriate adjustments. Busquets frequently dropped in line with the centre-backs, finding pockets of space to direct the tempo of the match. As Barcelona built out of the back, it was also common to see Rakitic and de Jong dropping deeper with Messi playing underneath Griezmann. These starting points made the game extremely narrow at points, only for Barcelona to play a long diagonal to the wings.

Barcelona attempted 222 progressive passes, completing 198 (89%). That exceptional number led to 34 positional attacks, 12 (35%) of which ended with shots. The space created by building out of the back allowed Messi (19/14=74%), Fati (7/4=57%) and Semedo (5/4=80%) to run at their opponents in 1v1 situations. Messi had more dribbling attempts and successful outcomes than the entire Levante team. Of Barcelona’s 3.12 xG, 1.37 xG came after building out of the back led to a direct attack and 2.04 xG from all successful build-outs, which includes those that led to a positional attack in the Levante half. 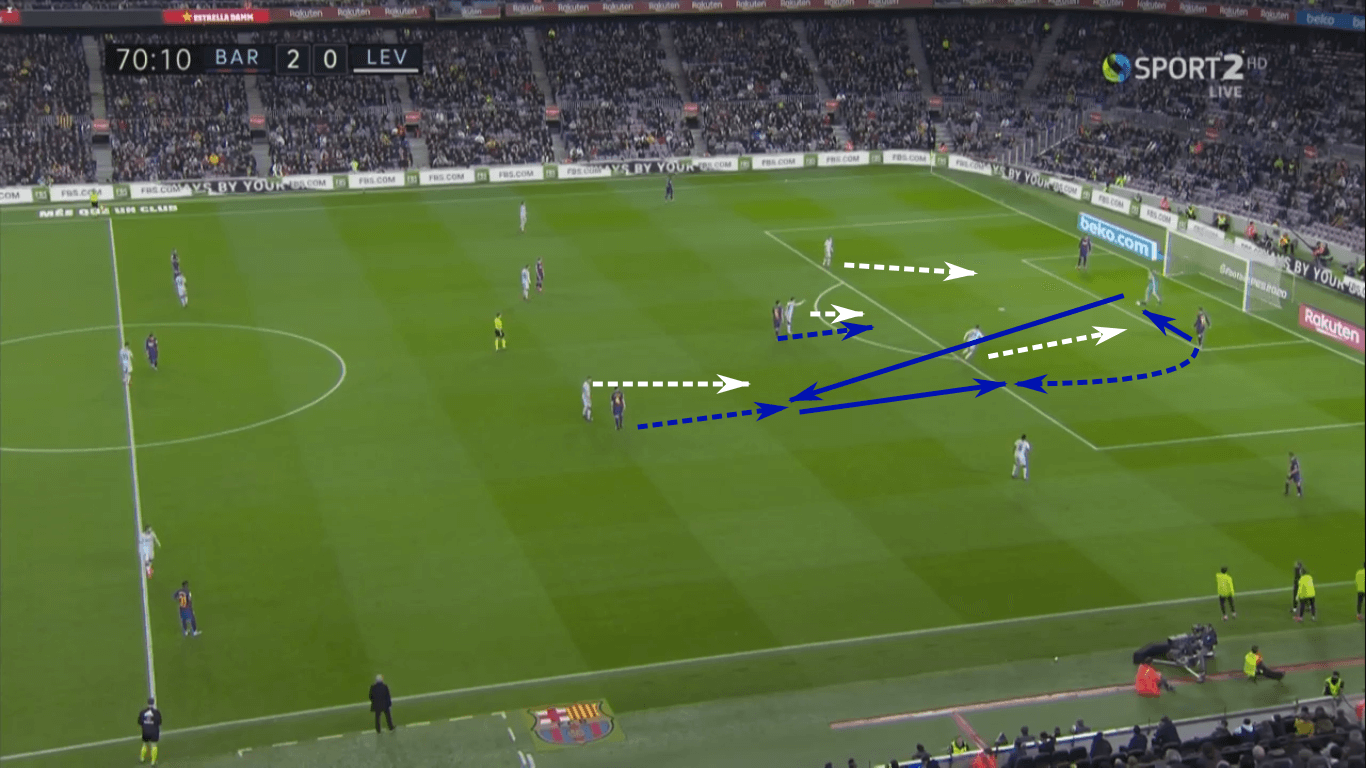 Lenglet took the Barcelona goal kick, playing to ter Stegen. With the pass to the keeper, Levante moved forward to pressure but hesitated as it drew near. While the Levante ranks moved higher, Busquets checked to the ball, cleverly blockading his opponent from the eventual pass to Rakitic. As ter Stegen played Rakitic, Lenglet moved higher up the pitch to receive the set from the Croatian. Notice that as Borja Mayoral stepped forward to press, he lost the run of Lenglet. 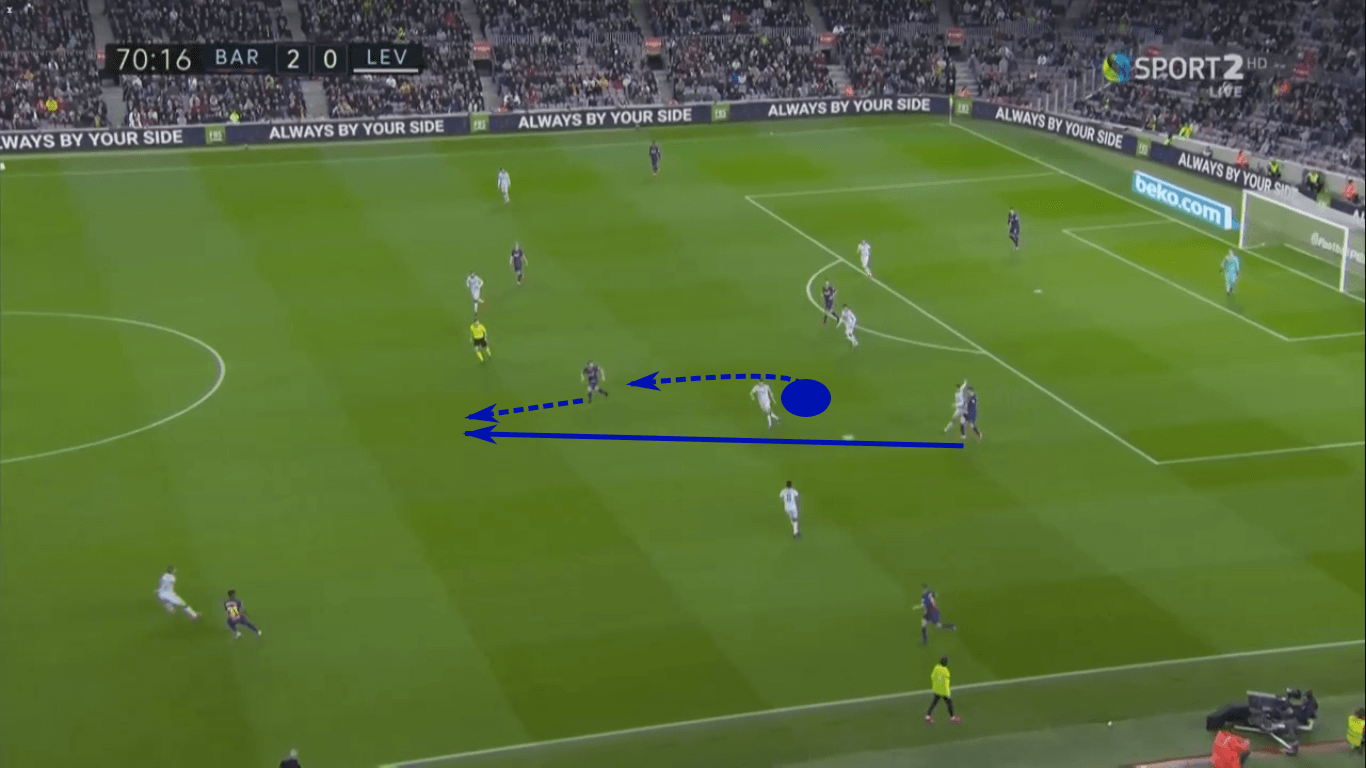 Much like Mayoral, Vukčević stepped forward to press, but lost track of Rakitic. This was a common theme for Levante, one that Barcelona exploited all game. The quick set and continuation of the run was central to Barcelona’s success when building out of the back. 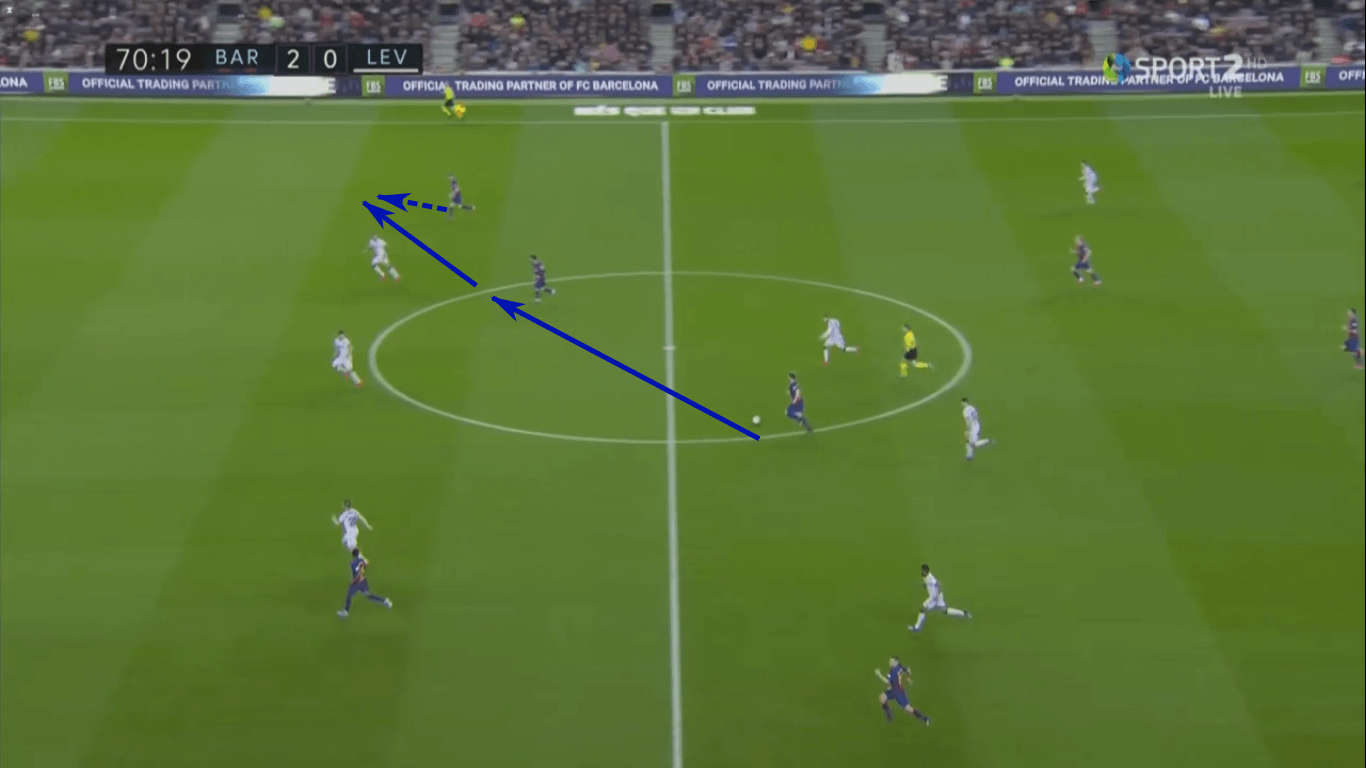 With Rakitic received in space, he carried the ball forward before playing Messi, who then sent the ball to Roberto. Playing a defensive-right forward role, Roberto dribbled to the box before cutting back and setting up a Messi shot.

This was a very different game than Setién’s first two La Liga matches with the Blaugrana. Compared to the tight, very compact matches against Granada and Valencia, this was a much more open, end-to-end type game. That’s largely due to Barcelona’s commitment to playing out of the back. While building out of the back was the tactical key for Barcelona, the big-picture is that it allowed them to create the attacking space that was so dearly lacking in the Setién’s first two league matches. Disorganizing the Levante lines and often pulling the opponent into two vertical channels with limited space between the lines meant Barcelona was able to run at the backline and progress quickly up the wings with little opposition.

In this case, Barcelona’s three forwards were closely connected in the central channel and left-half space, narrowing the Levante defence. From that massive gap in the midfield, Busquets had time to pick out the run of Semedo, playing the speedster down the wing. Notice how the forwards created that space for Semedo, leaving him unopposed out wide.

Toño misses on the sliding tackle, allowing Semedo to turn the corner and play the untracked run of Griezmann. The Frenchman missed his chance despite the shot registering the second-highest xG of the match (0.46). Poor shape and lazy back-tracking haunted Levante all night.

Here we see Messi in a deep position. As the pass was played to him, he backtracked into the space afforded him and was able to pick out the run of Fati. Central presence with little pressure doomed the visitors as Messi’s pass sent the youngster behind the lines for the first of his two goals. Fati’s willingness to make those runs in behind was vital with Vidal out of the lineup.

In an entertaining affair for the neutral, Barcelona flexed its quality over Levante, both individually and collectively. At the start of a crucial run of fixtures leading into El Clásico, Setién’s side must avoid a slip-up to keep pace with Madrid. Setién will surely be pleased with the performance and should look to continue using the deepest players to manipulate the shape of the opposition. With some unforgiving strikers on the schedule, they will have to clean up when playing from the back and defending in transitional moments.

For López and Levante, seven of the club’s nine remaining home fixtures are against teams in the top half of the La Liga table. Of the away games, five of the last seven are against teams below it in the table. Though Levante comfortably sits eight points out of the drop zone, a critical home match awaits it this weekend against the 18th placed side, Leganes. A win for the Granotas will either put them close to safety or in the midst of a relegation battle.

The WSL is back, after a two week break, and the game everyone wanted to see was the clash of […]

Pep in possession: A look at how and why City dominated the ball vs Everton

Manchester City are no strangers to setting new records, but that doesn’t make their current historic winning run of 17 […]