Barcelona are currently experiencing some problems with their forward line as Luis Suarez has been ruled out of contention for the upcoming four months and that could likely mean that the Uruguayan’s season is already finished despite it being only January. And of course, for a team that intends to contest for all the possible trophies in the ongoing 2019/20 campaign, losing your first-choice no.9 is definitely not ideal nor acceptable. So with that in mind, rumours started circulating the media of Barcelona’s desire to dip their toes into the transfer market to find a suitable replacement for the injured Pistolero.

But wait just a moment, haven’t they signed Antoine Griezmann for that very role just last summer, splashing €120 to snatch the Frenchman away from Atletico Madrid? Well, yes and no. While Griezmann is also a centre-forward by nature, he has a significantly different player profile from Luis Suarez and while he can do a job there, as was evidenced from his great displays at the beginning of the campaign as well as in Copa del Rey against Ibiza, he is not your traditional hitman in the box who will ‘live’ on the shoulder of the opposition’s backline and make use of the space behind their backs effectively.

Barcelona lacked such a presence in the box against Granada and Valencia and Suárez, even though his displays are hit and miss as of late, was sorely missed in that role. Griezmann is a player who will drop deep, link up with the midfield rather well, set up play and put both his versatility and mobility on display. But while he has been extremely prolific throughout his stay at Atlético Madrid, outperforming his xG values consistently, he’s not your usual fox in the box that will haunt defences in the danger zone as much as Suárez does.

A quick comparison in terms of some of their most prominent statistics will shed some light on their respective player profiles. Since Griezmann has been relegated to the left ever since his arrival to Barcelona, let’s just take their stats from 2018/19 instead. 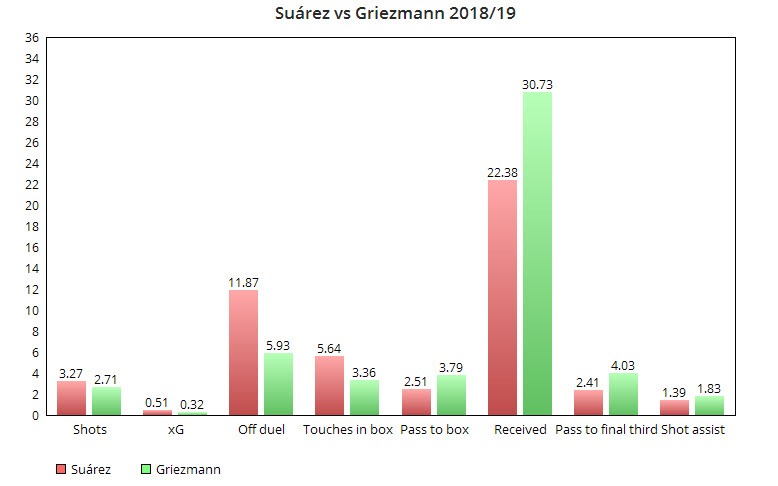 Instantly, we can see the difference in their player profiles – Suárez has transitioned more into the role of a fox in the box, prioritising the final product and taking a step back in his overall contribution to the build-up tactics. This is evident in his clear superiority in categories such as offensive duels with 11.87 vs 5.93 on average and more touches inside the box with 5.64 vs 3.36.

At the same time, we have to acknowledge Griezmann’s tendency to be the creative spark, drop deeper and progress the ball, as is also supported by the figures. We can see that he receives the ball far more often than Suárez, averaging 30.73 as opposed to his rival’s 22.38 – a clear indication of overall involvement.

But more importantly, he edges the Uruguayan out in passes into the final third, into the box and in shot assists, highlighting his build-up and creative roles within the system of his team. And while we can see from their respective xG values that both players are expected to score a similar amount of goals – Griezmann with 0.32 on average and Suárez with 0.51 – their profiles are essentially different.

And with that in mind, we’ll delve more into this data analysis and use statistics to try and find the players who are most alike to Barcelona’s no.90 and ultimately see who they should possibly be looking at as their newest reinforcement.

It’s difficult to pinpoint what exactly are Barcelona looking for in a striker but if they are going to eventually replace Suárez – a player who’s experienced tremendous success at the club throughout the years – they should naturally look for player profiles that best match the one of the Uruguayan.

In order to do exactly that, we’ve run the numbers taken from Wyscout and cross-referenced them with Suárez’s statistics to find players who have a similar output to the Uruguayan Pistolero. The metrics that were used include expected goals (xG), expected goals per shot (xG/ Shots), expected assists (xA), touches in the box (TIB), successful defensive actions (SDF), shots, passing accuracy (P%), long balls (LB), dribbles, crosses and aerial duels (AD).

This should give us a fairly good look at Suárez’s player profile, ranging from the lethality, build-up assistance and even defensive contribution. Of course, some of the stats have taken a slight dip in 2019/20 as the Uruguayan is slowly but surely approaching the twilight of his career but this data analysis should still give us an accurate picture of the players most similar to his current profile.

You can see the names that have derived from Wyscout’s database and some of them might even surprise you. The player who’s most like Suárez – purely looking at the statistics – is actually Wissam Ben Yedder of AS Monaco. He is followed closely by Luis Muriel of Atalanta and then the likes of Robert Lewandowski, Karim Benzema and Raul Jiménez close out the top five statistical picks.

Naturally, Lewandowski and Benzema are probably players that Barcelona wouldn’t target as Suárez replacements nor would they be willing to change their clubs for the Blaugrana right now. But if the Catalans were really looking for a shorter-term fix – a player experienced enough and capable of giving them a similar output to Suárez, Ben Yedder and Muriel definitely look like good but quite surprising picks.

We’ve done the same data analysis but this time filtered it to show us only the U25 players in an attempt to discover someone who could potentially be a long-term option for Barcelona and we got the following results:

The same metrics were used to filter the searches and the same stats were cross-referenced with Suárez’s own figures to get the graph you can see above. Unsurprisingly, Kylian Mbappé is topping the charts and looks like the ideal successor to Suárez’s throne. But, the young prodigy is very much a big anomaly and overperformer in most metrics and besides, signing him doesn’t really seem like a realistic option for Barcelona at the very moment.

For that reason, let’s put him aside for a moment and focus on the next three. Timo Werner is a player in high demand at the moment and seems like the most well-rounded forward currently available in the market. He’s definitely looking like a solid option. And the same can be said for Memphis Depay, the next player in line with a rather similar output to Werner and Suárez himself.

Before we delve into the figures a bit more, here’s a graph comparing all five players we’re analysing in terms of the stats used to calculate the similarities between them and Suárez.

Ben Yedder is definitely another surprise pick the data threw up but looking purely statistically, he truly does come as close as possible to replicating Suárez’s 2019/20 output. We’ll take his figures across all club competitions in the ongoing campaign in this case, disregarding his ventures with France.

The 29-year-old forward comes extremely close to the Uruguayan in almost all categories presented in the initial graph that can be seen above. But some of his most impressive metrics include 4.99 touches inside the box, 9.15 offensive duels won on average and 3.38 dribbles per game.

His profile, however, somewhat deviates from Suárez’s in terms of the crossing output as the Frenchman averages 1.92 per game so far in 2019/20 as opposed to the Uruguayan’s 0.78. Still, with 0.56 xG from Suárez and 0.53 from Ben Yedder, they are still pretty close overall.

Another ‘older’ option that could be considered as a short-term or even a temporary solution for Barcelona is Luis Muriel of Atalanta. The 28-year-old player is not the flashiest name in the market nor has he emerged as a possible candidate but his numbers mimic Suárez’s in a rather similar manner to Ben Yedder before him.

Intriguingly enough, the only stat in which Muriel currently lags behind the Uruguayan is pure passing accuracy with 73.7% compared to 77.3%. But his offensive output in other areas either matches or even outperforms the one of the Blaugrana man.

Now we come to the fun part of this data analysis. The younger options that could potentially replace Suárez in the long run. A lot has already been said about Werner and rightfully so as the 23-year-old looks like an overall well-rounded player.

While he doesn’t seem to be as accurate of a passer as the Uruguayan, Werner replicates and even outshines Suárez when it comes to xA with 0.32 on average, xG with 0.69, dribbles with 6.02 (53.4% success rate) and touches in the box with 6.6.

Depay is a rather versatile player that wouldn’t always be categorised strictly as a striker, having been deployed both out wide and in the attacking-midfielder position. But statistically speaking, he is also pretty close to Barcelona’s no.9.

With similar passing abilities – 76.7% accuracy, 1.86 long and 1.62 through balls – and overall attacking output with 15.84 offensive duels, 3.66 touches in the box and 0.42 xG, Depay is having a prolific season worthy of a comparison with the Uruguayan.

His 1.92 shot assists per 90 and impressive 7.02 dribbles with 53.8% success rate also give his attacking presence an extra edge. But once again, even though the stats do put them in a similar category, Depay tends to drift wide, especially onto the left and maybe wouldn’t be the first choice on Barcelona’s wish list.

Another forward approaching his prime years that likes to drift wide but is also competent and lethal in the centre-forward role is Fiorentina’s Chiesa. It very much feels like the 25-year-old Italian is still searching for his preferred role but still spends a significant amount of time playing as his team’s no.9, making him a suitable option on paper.

While Chiesa is still not as lethal as Suárez – with four goals from 6.91 total xG – he still contributed in other departments and averages 5.91 dribbles, 11.81 offensive duels and 4.61 touches in the box.

It’s also important to note his 1.29 shots assists and three assists from a total of 2.58 xA.

It has to be noted that these players are not necessarily the best possible players in their positions nor are they close to the top in some of the categories. They are, however, player profiles most similar to the one of Suárez.

If Barcelona want someone who can replicate the Uruguayan’s contribution, this comes pretty close to identifying the targets. However, another thing we have to take into account is that maybe it would be wise to target players who outperform the veteran since his ability, and subsequently, stats, have been declining in recent years.