Another clash between Manchester United and Wolves again, it was the fourth of the season and the second clash in the Premier League. Both clubs spent some budgets to reinforce their squad in the last days of the winter transfer window.

The game resulted in a nil-nil draw after 90 minutes. Bruno Fernandes, the 55m Euro signing was an eye-catching man, but there were more to investigate on both teams.

In this tactical analysis, we will analyze how Manchester United drew Wolves at the Old Trafford. It is an analysis that focuses on tactics.

Ole Gunnar Solskjær played his team in a 4-2-3-1 formation. United were missing Paul Pogba, Nemanja Matić and Scott McTominay, hence, they played Fred and Andreas Pereira as the pivots. There were a few changes from the derby, Daniel James returned to the starting lineup, Jesse Lingard was on the bench. Luke Shaw played as a left-back, as Brandon Williams was rested on the bench. Of course, the new man, Fernandes also started.

Wolves welcomed the return of Diogo Jota and Willy Boly. Nuno Espírito Santo’s team played in a 3-4-2-1 formation, and the coach made some rotations. Given to the return of the injured players, Leander Dendoncker and Pedro Neto were left on the bench. Meanwhile, their new singing, Daniel Podence, was also on the bench.

Wolves, as in their own solid style, their defence was compact. Statistically, they restricted United’s xG at 0.58 (Their season average was 1.57). As usual, they did not push too high to press for possession, they set a low block to resist United. They were good at locking the ball side, preventing central penetration.

They set their midblock deep, moving the pivots to defend the ball side with the back-five, so that United could not overload an area. On some occasions, they even allowed United to go forward at flanks, instead of passing to zone 11 or 14, since Nuno believed his team was capable of clearing the crosses.

In the following image, it showed the defence of Wolves. United committed three players on the left, but Wolves positioned even more. United did not gain any numerical advantage in this situation, and both Fred and Pereira were covered by Adama Traoré and Jota.

There was another intriguing point to note. When James dribbled forward, the first decision of Rúben Neves was to cover Fernandes instead of engaging the Welsh; maybe, the priorities of the pivots were to cover the United midfielders first. 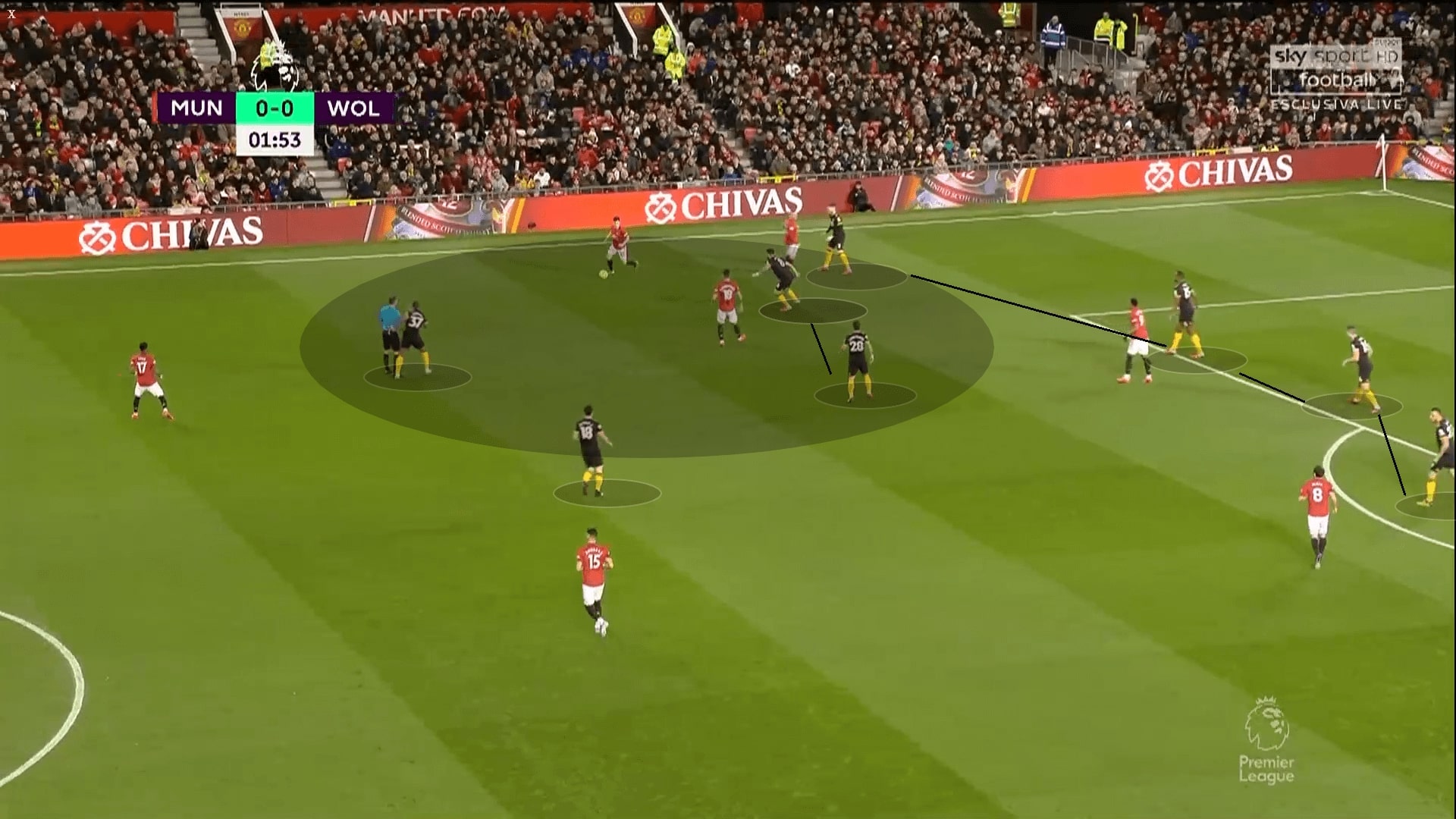 As the game went on, Wolves were defending even deeper. When the ball was at the centre, United lacked width, hence, it allowed Wolves to defend in an extremely compact 5-4-1 block in front of the box.

Before the header from Diogo Dalot at the stoppage time, United only had one shot in the box, the other 10 were long shots. The average shooting distance was 22.88, higher than season average, 19.63.

Throughout the game, United struggled to deal with the block. When they were forced to cross at the wide-area, they merely completed five crosses out of 20. 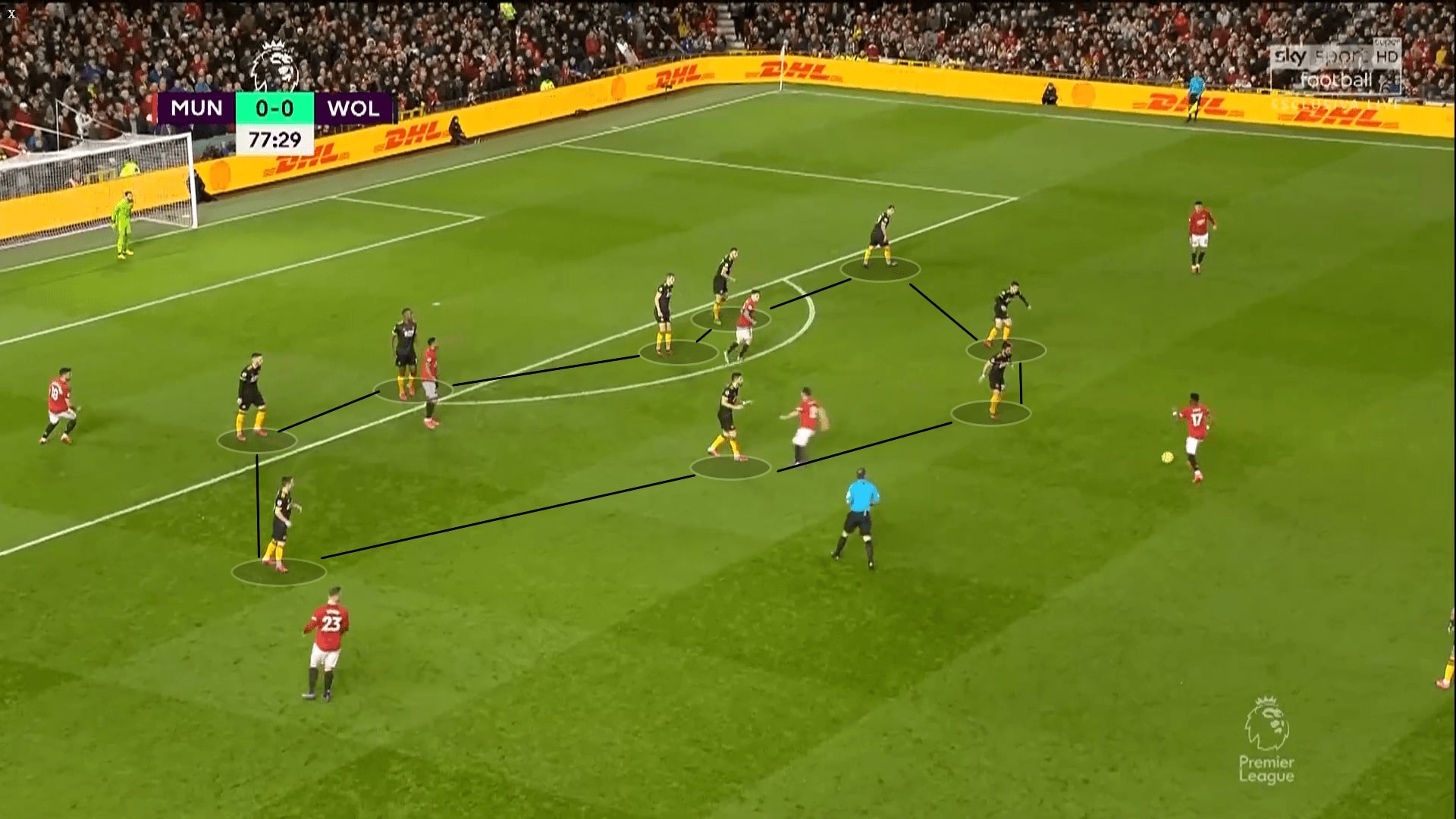 The return of Boly made the defence of Wolves more solid, as a proper centre back, Boly had better defensive awareness than Dendoncker. In this match, he anticipated the attacking movements and passes of United, winning the ball back on many occasions.

In the second half, James was moved to the right side, partly the reason was Boly. The Frenchman won six out of eight defensive duels; 100% of his two aerial duels; he also contributed six interceptions.

The below image was an example of his anticipation when defending. United’s forward Anthony Martial recognized the spaces between the Wolves players. Shaw passed the ball to him, but Boly anticipated that pass and intercepted before Martial arrived. 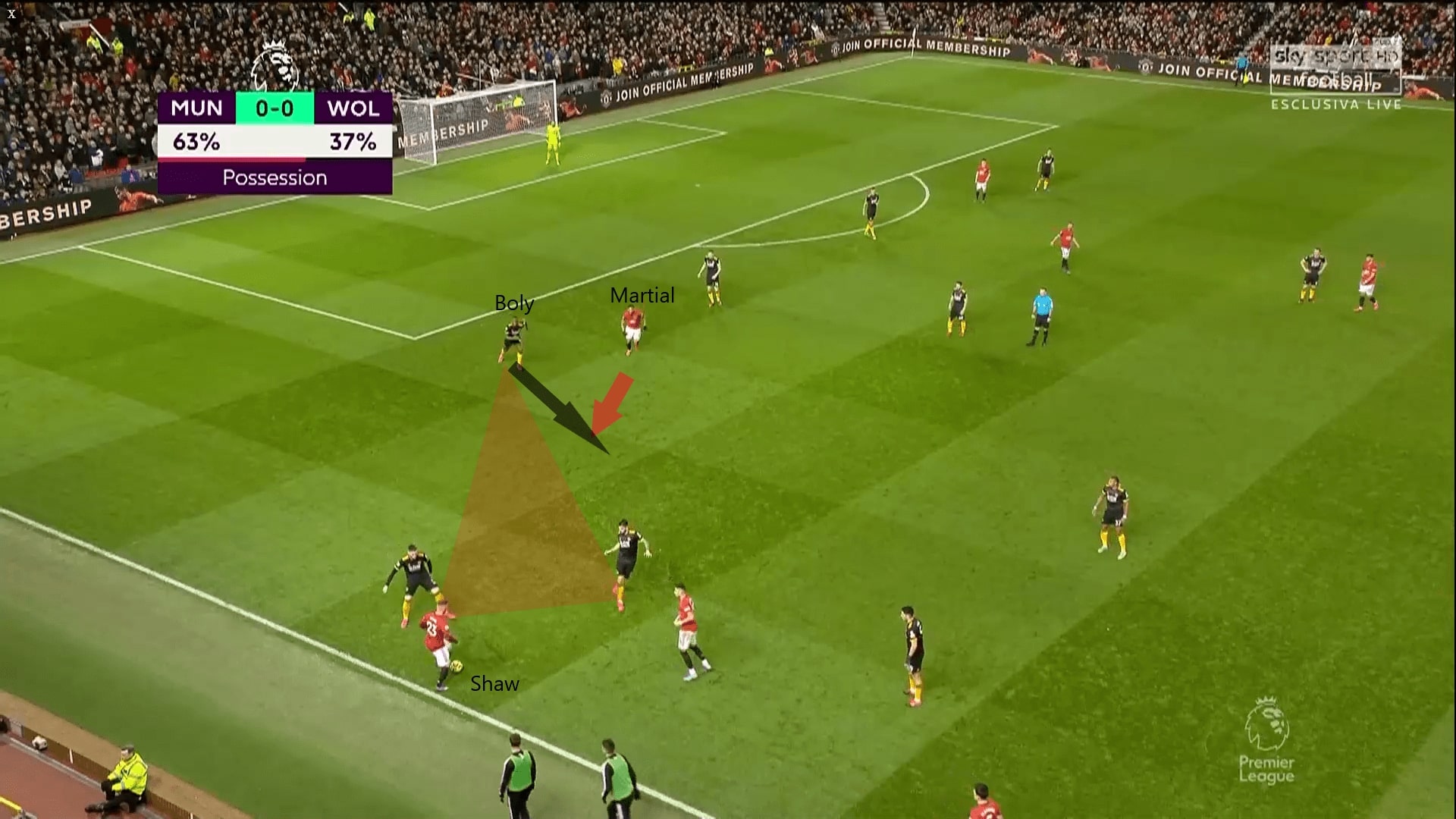 The build-up of United

In this game, maybe because of the arrival of Fernandes, United did not stick to their direct style of play (another part of the reason the low positioning of Wolves’ block). They tended to play out from the back, by utilizing the numerical superiority, dropping players and free players.

In general, Aaron Wan-Bissaka moved into an advanced position, and Shaw was slightly inverted to the midfield. Meanwhile, in the first half, Juan Mata frequently dropped as an extra man, ensuring the presence of the second layer in United’s build-up.

In the first-half, United centre-backs tended to play an easy pass, prevented a riskier central penetrating pass. As shown in this example, United enjoyed a five v two numerical superiority at the centre, but Victor Lindelöf still passed to Pereira, who was totally unmarked on the right.

However, when United tried to progress the ball, the movements of front players did not provide sufficient short passes options, hence, United ruined their good build-up pattern. 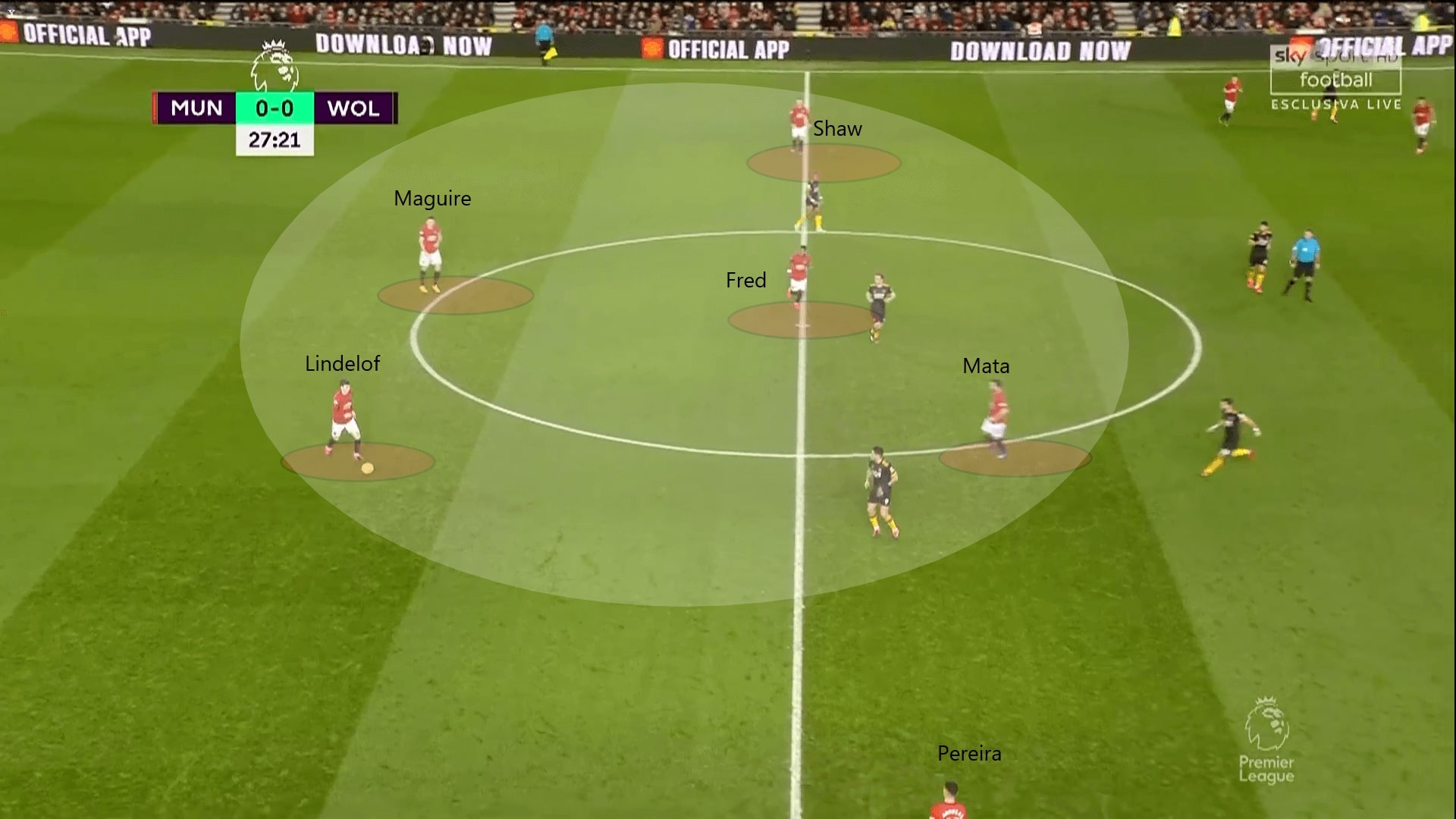 In the second half, Solskjær made quite a lot of adjustments. In the first phase of the attack, his centre-backs were encouraged to carry the ball forward, make vertical passes to penetrate through Wolves players.

This helped United to progress the ball better, as Fred was not a good vertical passer, especially when his body orientation was unoptimized. With the passing ability of Harry Maguire and Lindelöf, United were more comfortable in the build-up.

In this example, Fred stepped aside, which encouraged Maguire to carry the ball forward. He noticed the gap between Jota and Raúl Jiménez, while Fernandes was moving to receive that pass. 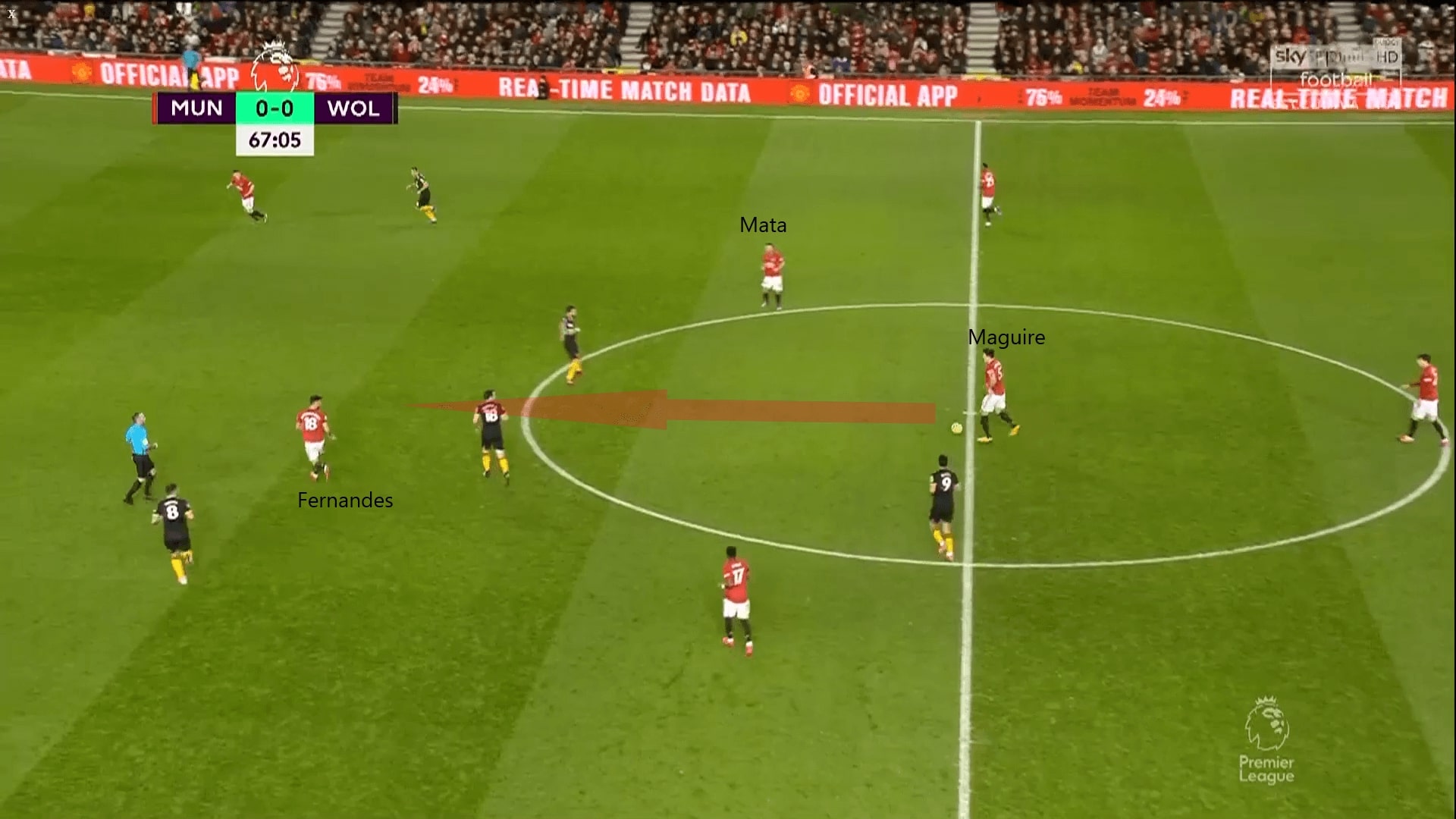 A repeating issue of United was their poor movements in the final third. They did not have many combinations or meaningful runs when dealing with blocks or even attacking flanks. With the arrival of Fernandes, and, when the Portuguese was assigned to play in a more advanced role, he provided some creativity and inspirations for United down the flanks.

Fernandes seldom overcomplicate things when he was on the ball, he was not looking to take on multiple players. The 25-year-old Portuguese passed simply, but still, the passes were progressive.

The below example was a simple combination with James. When James passed to Fernandes, he immediately ran to the spaces behind Matt Doherty (again, it could be hinting that Neves was prioritized to defend the centre, as the former Porto man did not track the Welsh). Despite being a right-footed player, Fernandes did not look to cut inside, he just simply responded to James’ run and gave him the ball. With this pass, United entered zone 16 very comfortably. 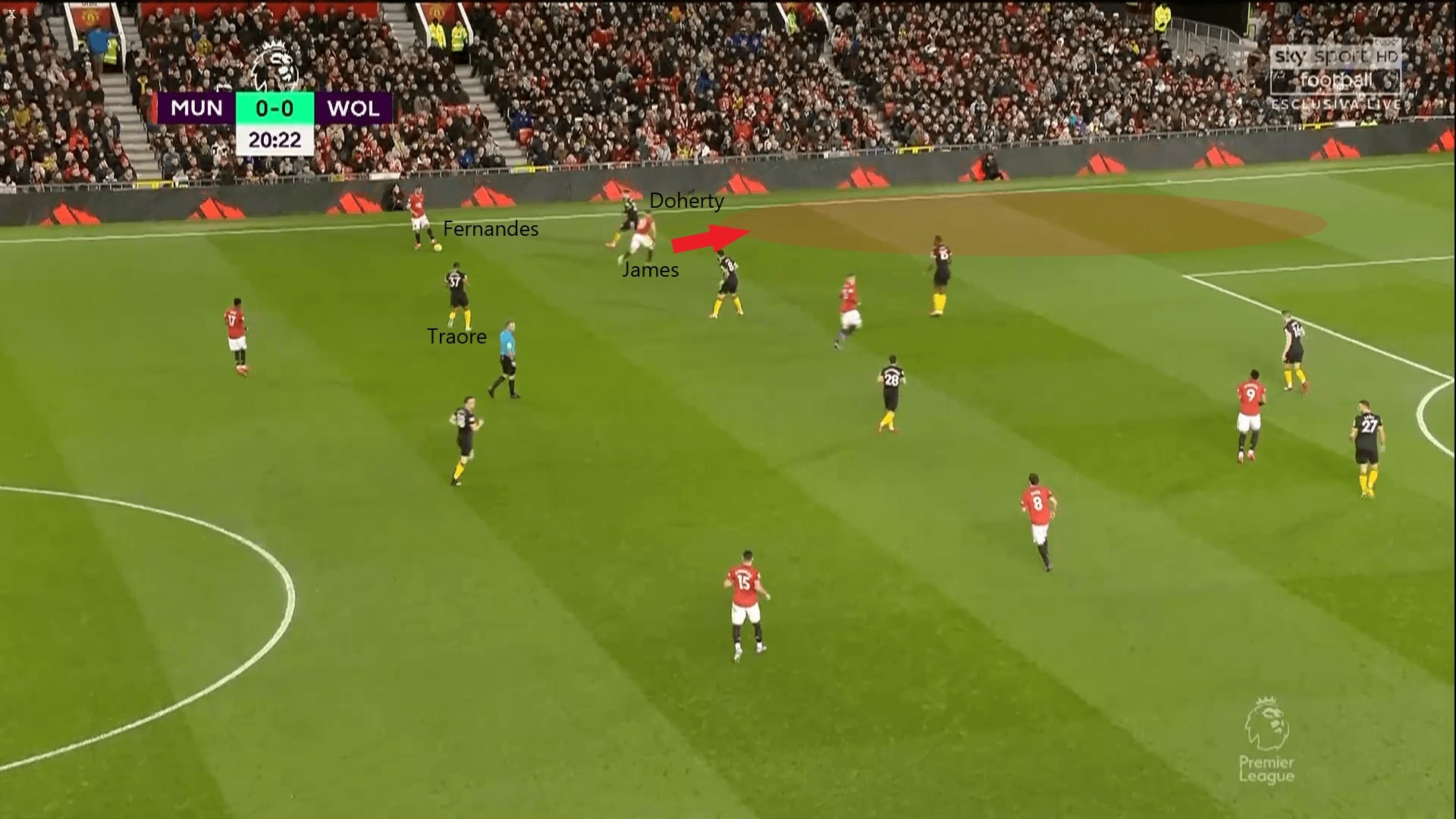 However, these occasions did not last long, as Pereira, James, Mata and Fernandes switched their positions as the game went on. The Portuguese stayed much deeper, hence, he could not join the attack in the final third as he did in the first half.

In the first half, United pressed high to win the ball back as quick as possible. The PPDA in the first half was 7.2. Solskjær continued his man-marked approach, they did not allow Wolves to move the ball from the ball comfortably. They had to cut the passing triangles of Wolves on both sides.

This did not heavily disrupt Nuno’s plan, as Wolves were not a team insisting to play out from the back. However, United managed to prevent Traoré from receiving the ball. In this campaign, the Spaniard received more than 17 passes per game, however, the figure was seven in this game.

United did well to cut the linkage between Traoré and Doherty, also, the press prevented the skipper, Conor Coady from playing a comfortable long ball to the Spaniard. In this example, United pressed high, and, in a man-marking approach. Martial was closing Coady. 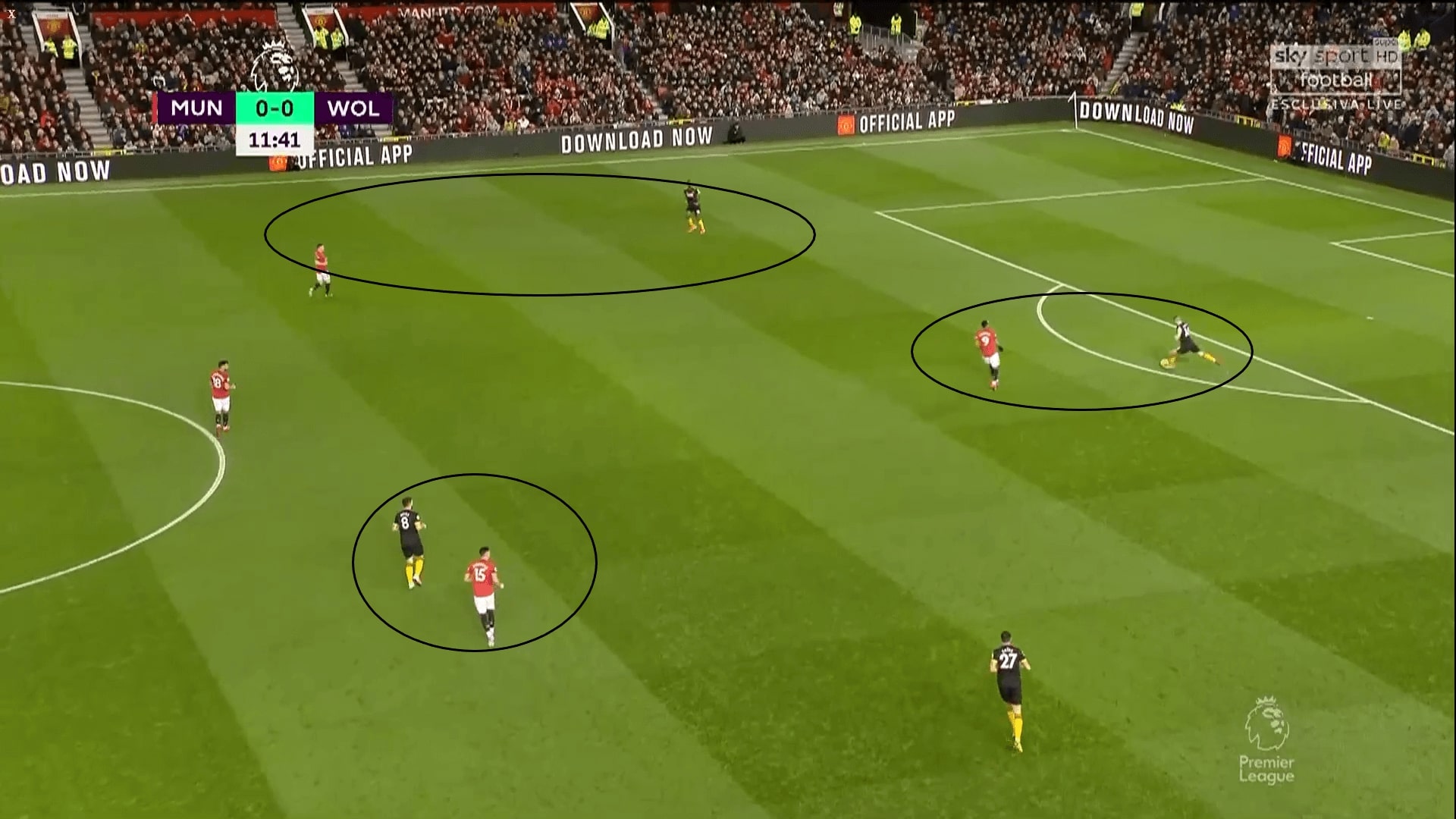 Under pressure, the pass from Coady was difficult to control and progress to another phase. Wolves returned the ball. 10 seconds later, the ball returned to Coady’s feet. United continued their man-marking approach, and the skipper’s body orientation already disabled the pass to the left centre-back, Romain Saïss.

Under this circumstance, Coady attempted his trademark diagonal pass again, but the ball was out. 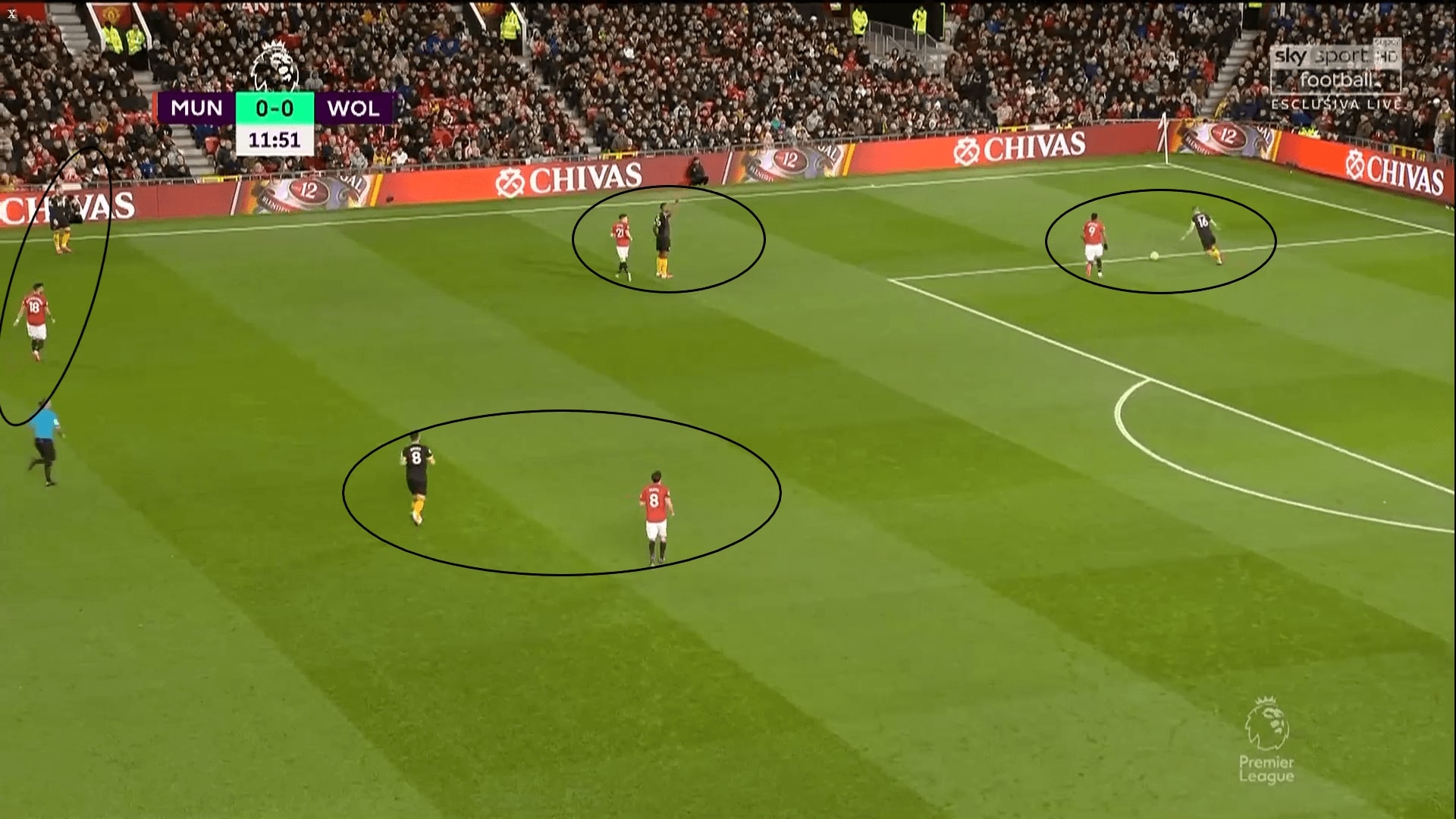 After the break, United did not press as high as they did in the first half. They switched to a midblock more often, and it was quite compact as well. The main goal was to prevent Neves or João Moutinho receiving the ball smoothly at the centre. Or, some better cases, it forced Wolves to go long, such as the situation in the following image.

Both centre-backs of United dealt with the long balls from Wolves finely, these were reflected in terms of numbers. Maguire won three of his five aerial duels; his Swedish partner, Lindelöf, was even better, won four out of five. By contrast, Jota, Jiménez and Podence, none of them succeed to win the ball from the air from a total of five aerial duels. 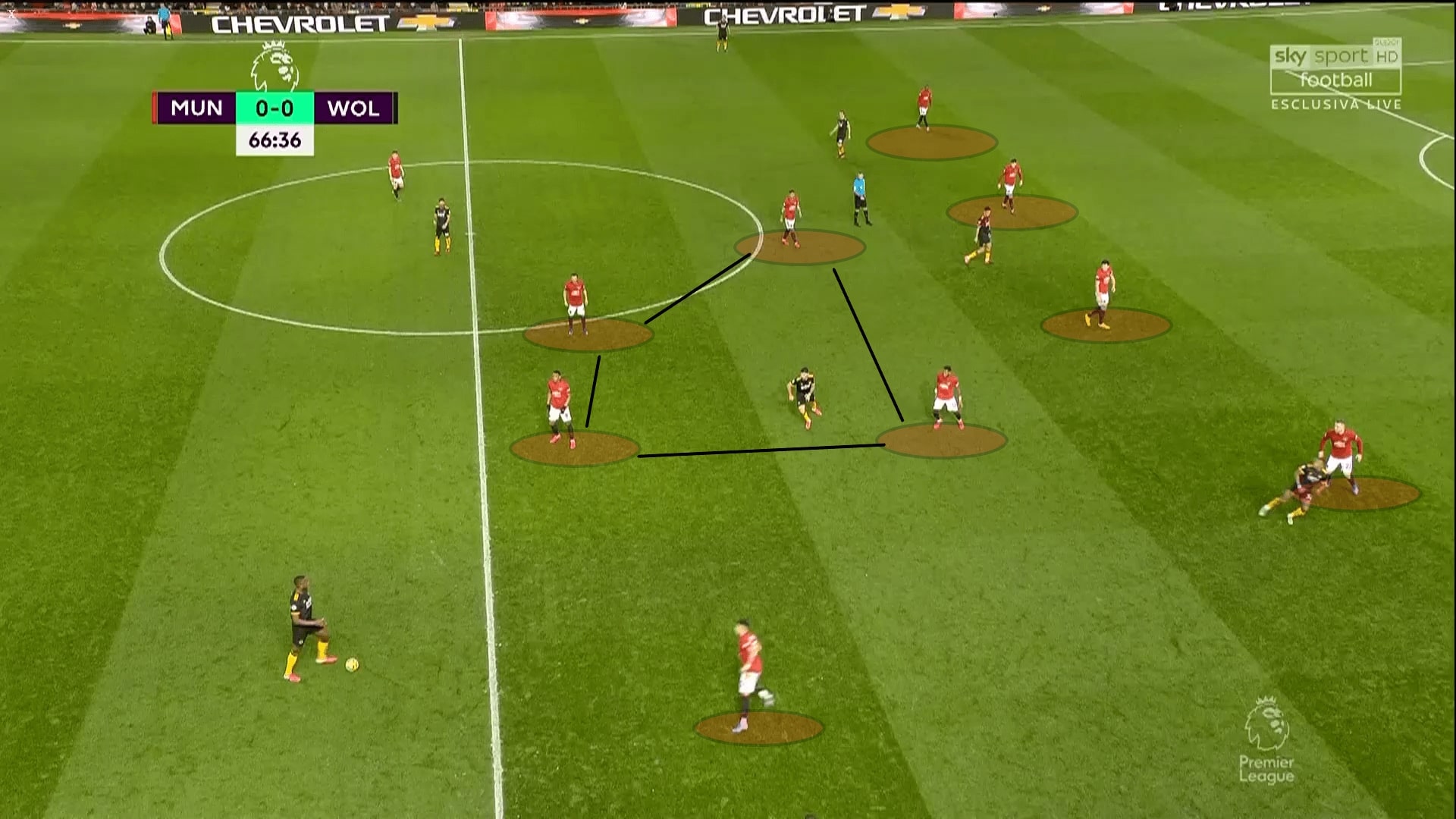 Wolves in the offensive transitions

Without much rooms to develop their attack in the positional plays, Wolves got their chances in the offensive transitions. Given Traoré was tightly marked and unavailable, Jota became the main man in the counter-attacks. He handed some pretty stats, including four successful dribbles out of five; won 11 in his 14 offensive duels (79%).

Below was a game example to show how fit was Jota to prepare a counter-attack. Before Neves touched the ball, the Portuguese already half-turned, readied for a sprint to exploit the spaces behind United players.

Meanwhile, the wingbacks of Wolves made forward runs in these transitions as well, these gave support to the teammates. Jonny Otto, the left wingback, also dashed forward to join this counter-attack. 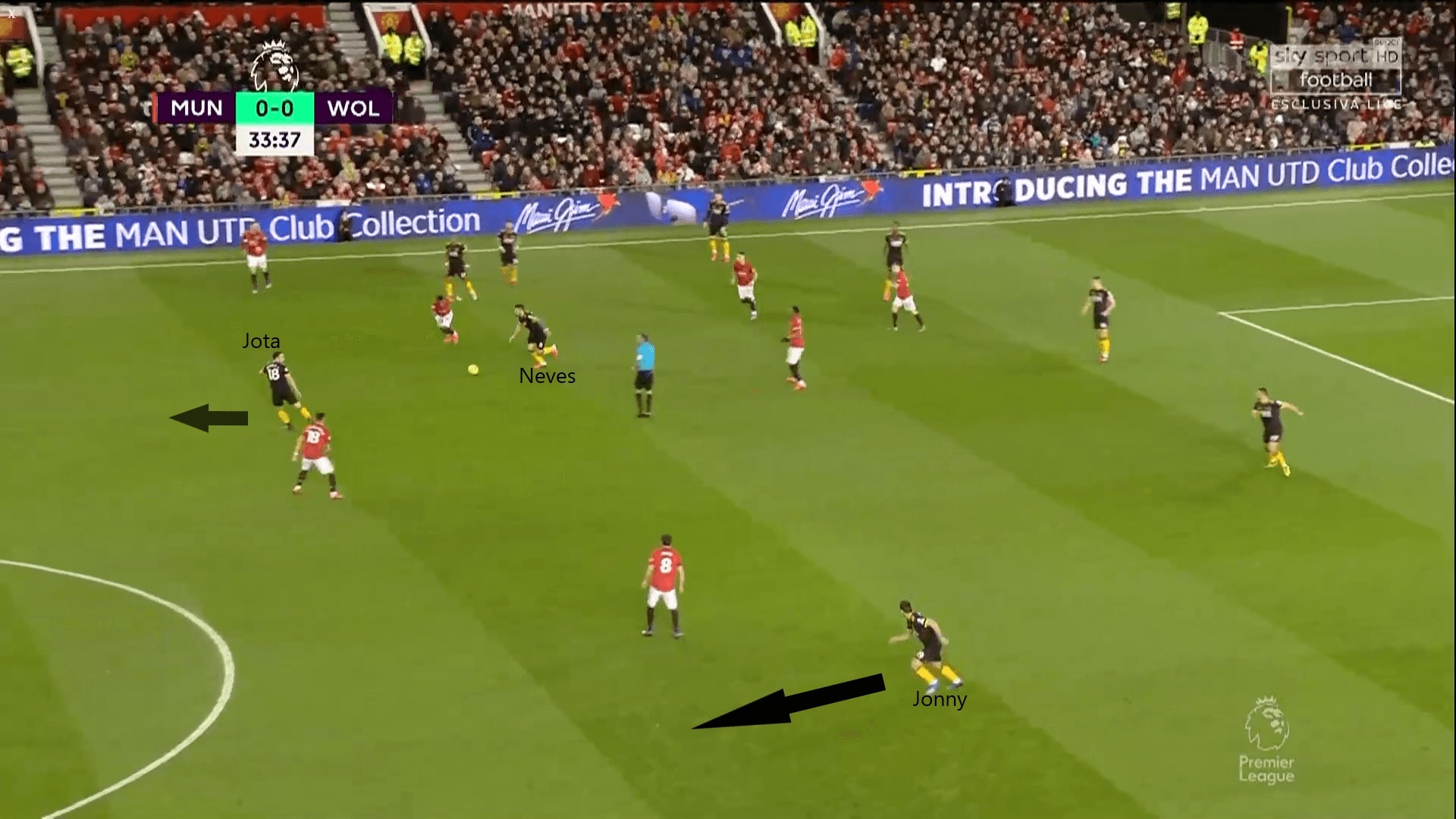 Another element was the isolation of the player on the far side. Wolves tried to create more rooms for a wide player, ideally, he would be Traoré. With a forward run to bring Shaw, the United left-back inward, it generated spaces for the wide player.

This scenario was an example. Jota switched play to find Traoré, who was benefited because of Doherty’s movement. The Irish made an inward run which took Shaw with him, created a shooting chance for Traoré at the edge of the box. 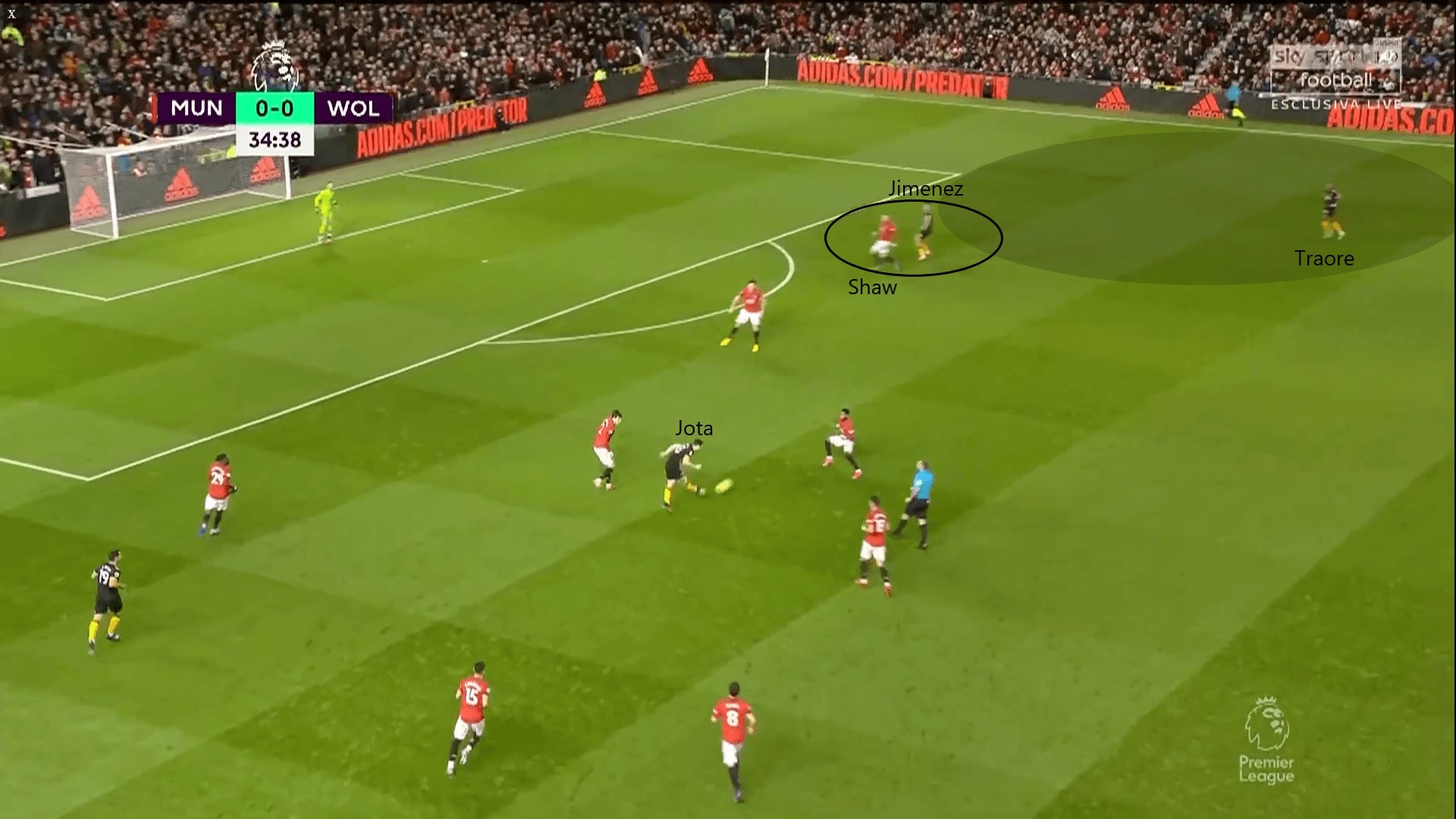 It was a close game between the two teams chasing for continental competition qualification. By xG, Wolves’ 0.77 was slightly better than United’s 0.58. David De Gea made important saves again, including a tight angle powerful effort from Jiménez and came out early to for Jota’s one.

Tactically, United showed some symptoms of changes, but time will prove is it just a change of game plan or a change in general approach. For Wolves, once again, they could be a bit more clinical if they were ambitious to challenge the top four. Currently, United and Wolves sit seventh and eighth, got 35 points, six away from the top four.