Salzburg’s Sesko: The next striker off the Haaland-inspired production line – scout report

Earlier this week we received confirmation of a transfer that many had been expecting for some time as Leicester City announced the signing of the 22-year-old Zambian forward Patson Daka from Red Bull Salzburg. The fee that has been reported is somewhere in the region of £22M but even then you might expect that Salzburg would be more upset at losing a player who played 3,476 minutes last season and averaged 1.11 goals per 90 minutes. Instead, the Austrian side accepts that this is all part of the project as players develop and explode in the Austrian Bundesliga before moving on and making the club a more than healthy profit. Indeed, the sale of Daka simply opens up first-team minutes for another player to come through their development pipeline.

While Sekou Koita, Mergim Berisha and Karim Adeyemi will all expect to gain more exposure in the 2020/21 season the sale of Daka may speed up the integration of a young striker who could well eclipse what Daka has achieved in Salzburg. That player is the 18-year-old Slovenian forward Benjamin Sesko.

Sesko is already firmly established within the Red Bull development network having moved to Austria from the Slovenian side NK Domzale in 2019. He was immediately sent to the second tier side Liefering on loan. Liefering have an established partnership with RB Salzburg and they provide a regular home for some of the Bundesliga side’s most promising talent. While Liefering are not eligible for promotion to the Bundesliga as a result of this partnership they do enjoy a steady flow of talented young players.

It is likely that we will now see Sesko moved to the RB Salzburg squad for the start of the 2020/21 season but what kind of player is he?

Well, first of all, it is clear to see why there have been so many comparisons made to a certain Erling Haaland. Sesko stands at 194cm | 6’4″ and he has a broad and powerful build. Like Haaland, however, the Slovenian youngster possesses significant pace with the ability to make timed runs behind the opposition defensive line. His pace allows him to create significant separation when moving on to through balls in these areas. Sesko also possesses the ability to score a wide variety of goals and to finish with his left or right foot (he is predominantly right-footed) or with his head. He has scored tap ins at the far post and angled drives from outside the area. In short, Sesko profiles as a goalscorer. 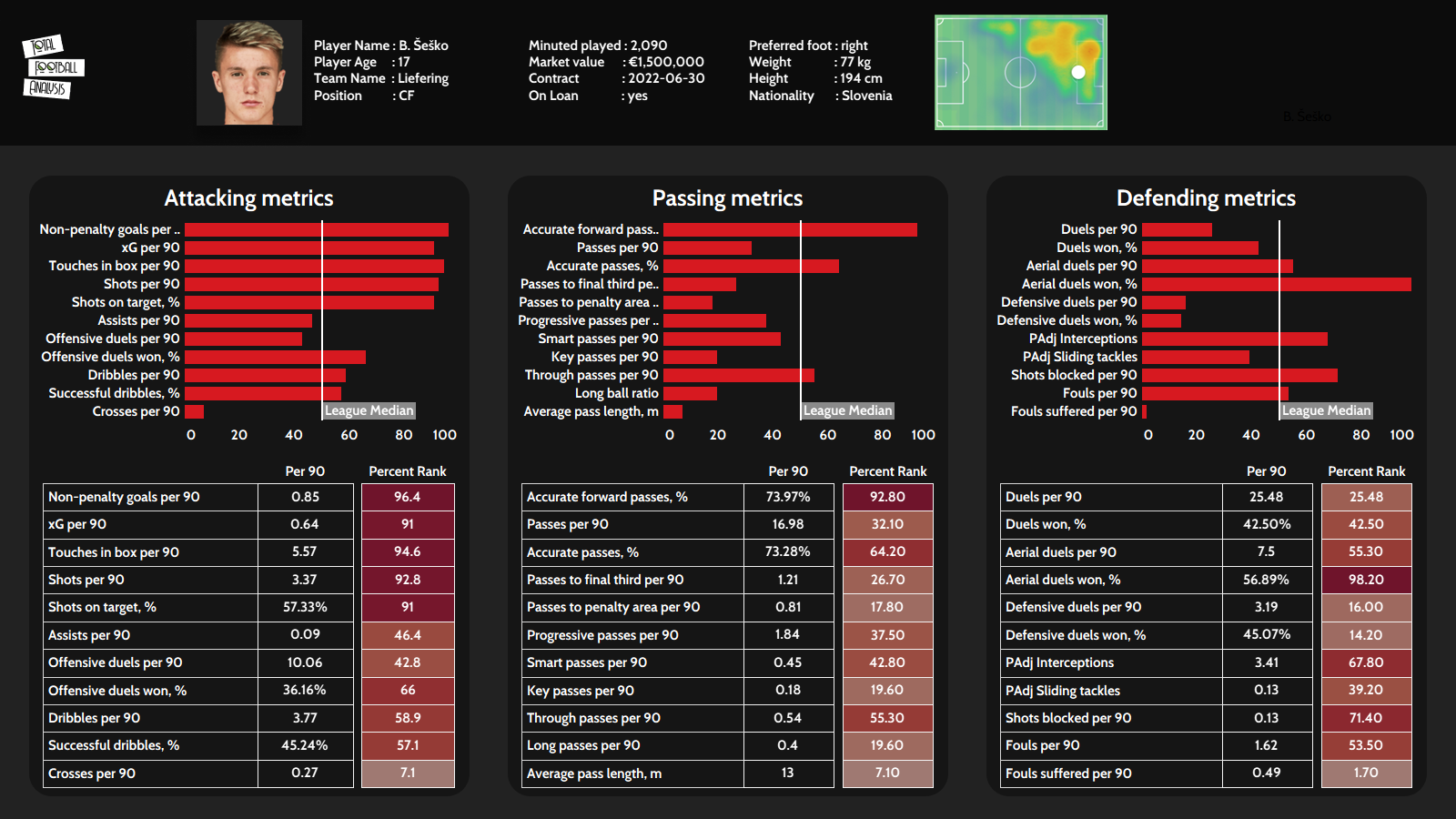 The raw data behind Sesko’s performance this season is impressive 0.85 non-penalty goals per 90 from an xG of 0.64 with 5.57 touches in the opposition area per 90 and 3.37 shots per 90 start to build a profile that suggests that Sesko is an attacking monster and there is definitely more than a little truth in that.

More than someone who is just a battering ram striker, however, Sesko is a player who could fit a variety of attacking systems. He can lead the line and play with his back to goal where he receives and then brings others into play but he can also receive the ball deep and then drive his team forward and last season he averaged 3.77 dribbles per 90. 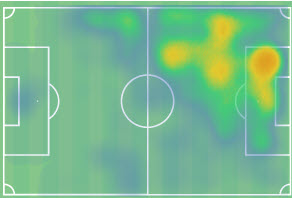 Sesko’s heatmap for last season shows us that he has a tendency to shade over to the left-side of the field when he receives the ball and completes the most actions. He also tends to enter the penalty area from that side of the pitch.

With RB Salzurg likely to continue with their 4-2-2-2 structure and with verticality in possession and aggression out of possession as the cornerstones of their game model it is safe to say that Sesko will fit their system perfectly.

As mentioned above one of the biggest strengths of Sesko’s game is his ability to stretch the length of the pitch with runs in behind the defensive line. There was some talk that during the 2020/21 season whilst playing for Liefering that Sesko was measured running at 36.1 KM/hr in a match against FC Dornbirn. To provide some context that is extremely close to the top speed that Kylian Mbappe has been measured at.

What is key, however, is that Sesko has displayed a feel for the flow of the game. By this I mean that he understands when to make his run and when to maintain his position off the shoulder of opposition defenders in order to stay online. When the opposition do play with a higher defensive line, however, the Slovenian forward is a constant threat to make a run that stretches the pitch. Given the verticality in possession that RB Salzburg are known for it is likely that this pace and ability to time a run will result in a significant number of goal scoring opportunities for Sesko. 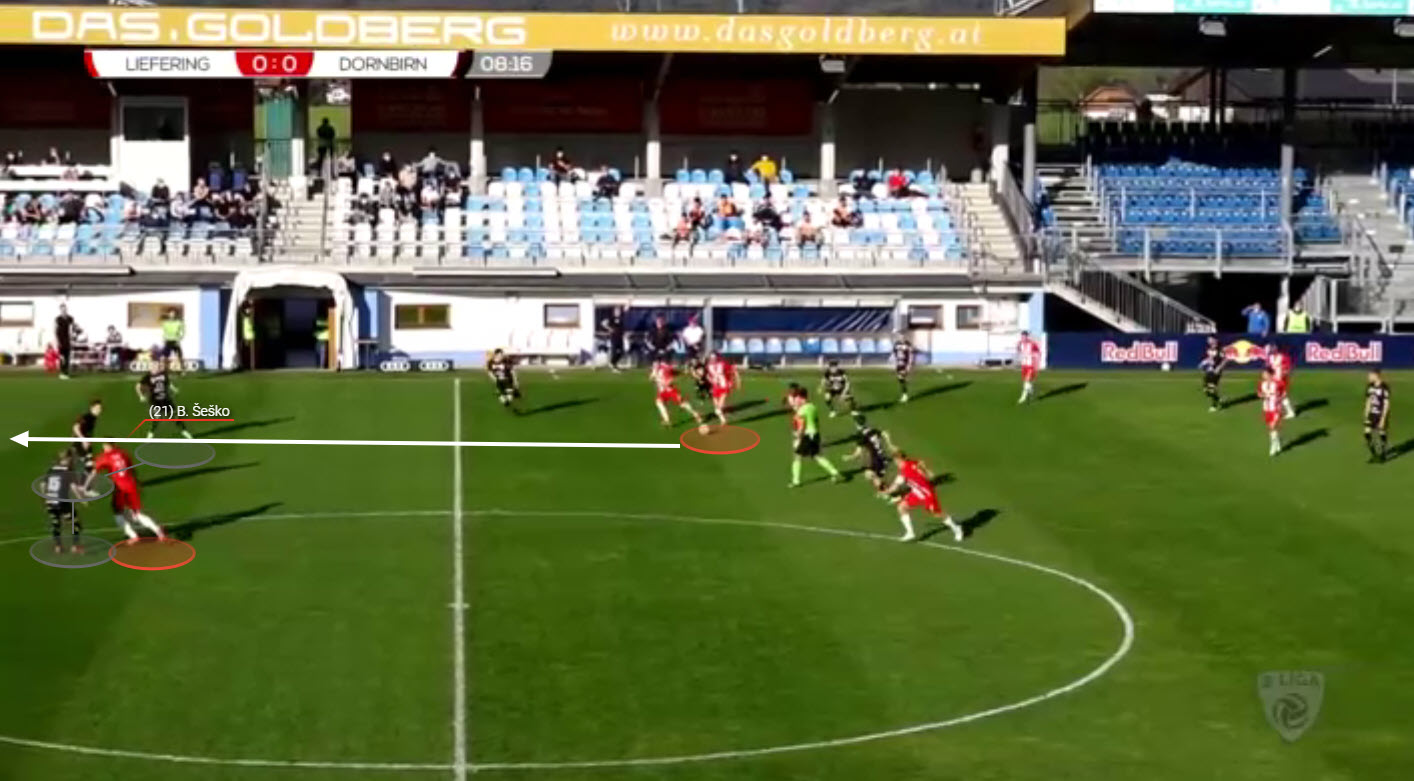 Here, we see an example of Sesko’s willingness to run in behind the opposition defensive line from the aforementioned match Dornbirn. With the ball breaking in midfield and finally coming to a Liefering player we see that Sesko has isolated himself 1v1 against the defender nearest to this side of the pitch, remember that Sesko prefers to shade to the left where he can cut inside on his favoured right foot, as he waits for the right time to make his run.

As the player receiving the ball in midfield gets his head up we then see Sesko starting his run across the first defender and into the gap between two of the three central defenders. His pace means that as he is already moving with momentum he gets immediate separation from the opposition defenders. 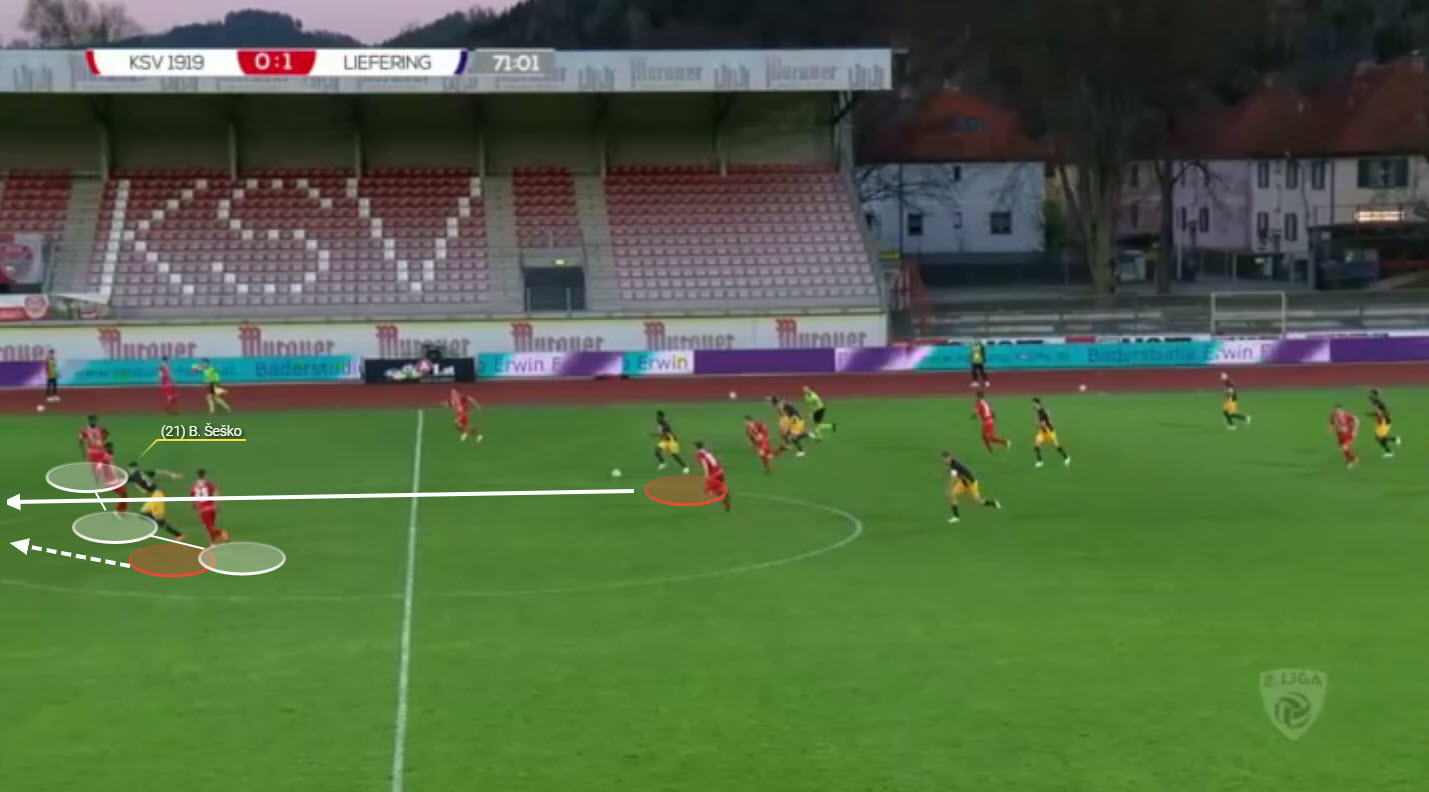 Another example here as Liefering are in an attacking transition with the ball being driven through the midfield. Once again Sesko has isolated himself against the opposition player on this side of the field and he makes a timed run that breaks the line of the opposition defence and allows him to move through on goal to collect the through ball.

Positioning in the final third

As well as having a physical profile that allows him to run behind the defensive line and create separation from opposition defenders Sesko also displays the ability to identify and occupy pockets of space in and around the final third. This allows him to receive the ball in dangerous areas before either combining with teammates moving from deeper positions or to turn and access the penalty area in dangerous positions.

Indeed it is difficult to categorise Sesko as either a reference striker or as a dynamic player who attacks space. Instead, he is a mix of both. 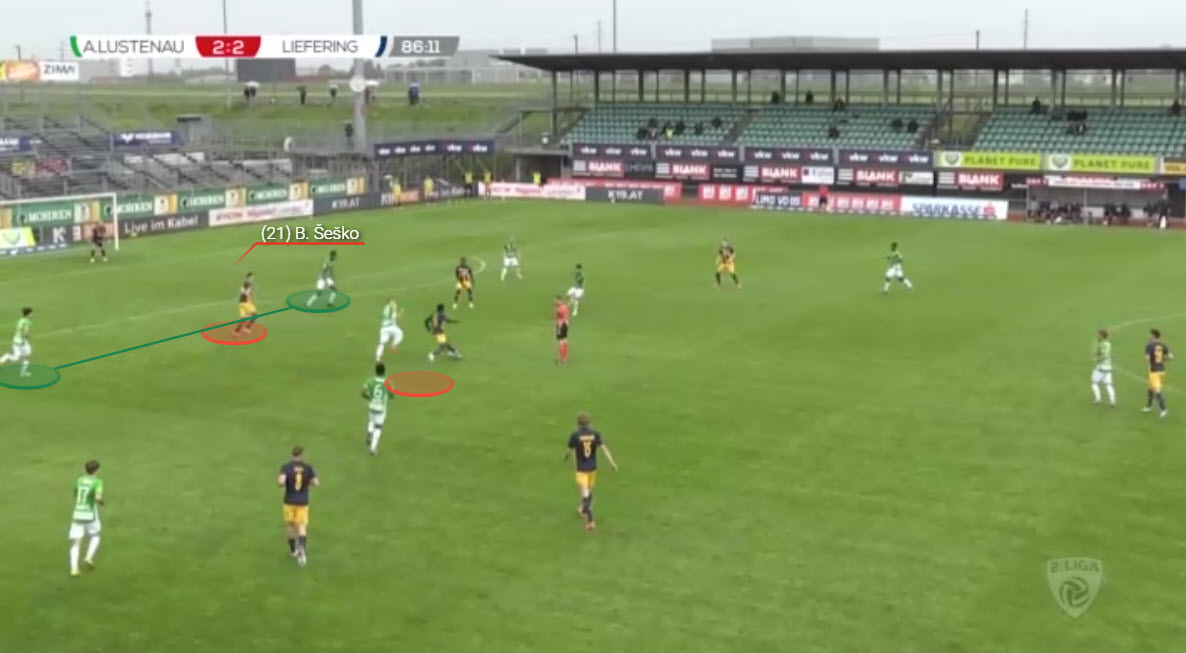 Here we see Liefering attacking in an established attacking phase with the opposition defensive structure already poorly organised. The ball carrier is moving across the face of goal and this drags the highlighted defender across goal as well. This further stretches the connection between the two highlighted defensive players and increases the space and Sesko has accessed by placing himself between the two defensive players.

When Sesko receives the ball in this position he can immediately turn and access the penalty area with a clear angle to get off a shot at goal. 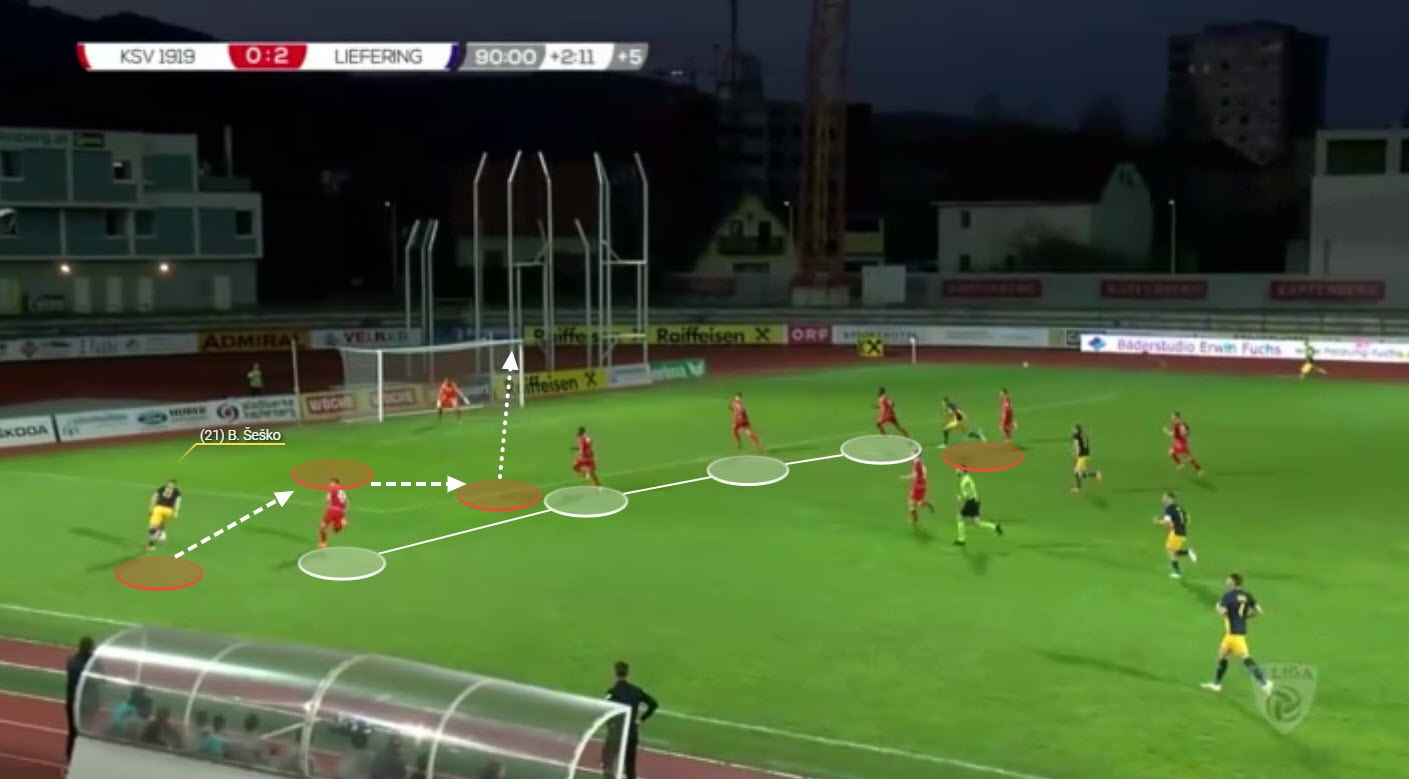 This time we see Sesko taking possession of the ball in the wide spaces before finding space to access the penalty area and working a shooting chance. As we discussed above we see Sesko displaying a clear preference for working from the left side of the pitch and the attack and into the centre of the pitch. When he receives the ball wide in these circumstances he can carry the ball powerfully and quickly towards goal and typically when isolated against fullbacks he can overpower them fairly easily.

We see that in this example as Sesko receives the ball and then casually brushes past the opposition fullback before cutting back inside towards the edge of the area. From this position and on his favoured right foot we then see Sesko scoring with a powerful drive into the far corner.

While Sesko profiles very much as a multi-functional finisher who can play extensively in all phases of the game he is also a player who can help his team to progress the ball through the thirds thanks to his ability to position himself intelligently and to receive under pressure. Indeed, Sesko is extremely press resistant as he displays the ability to accept possession of the ball and then hold off pressure from the opposition defenders. This ability to receive the ball allows the players in position on the first line to find a progressive passing option through the thirds. 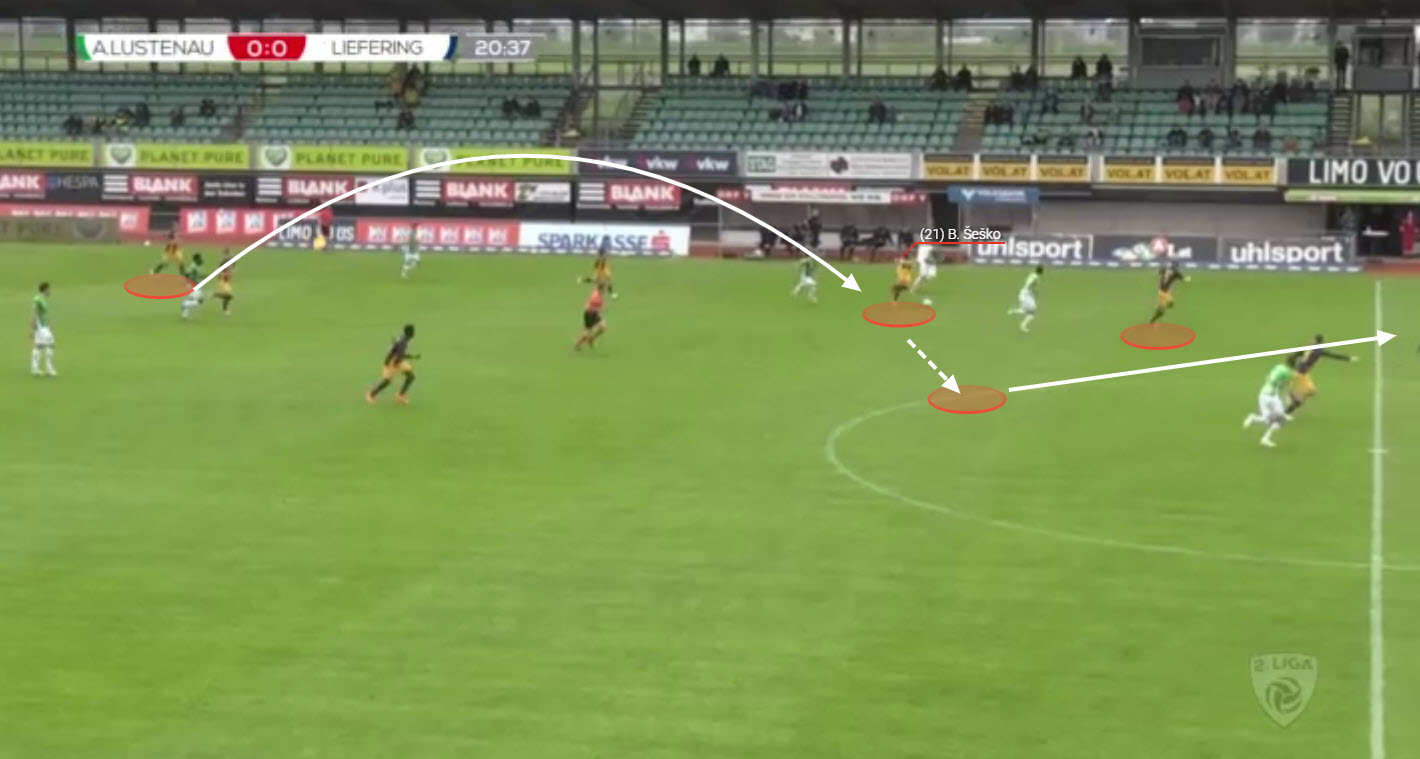 Here as he turned forward he took a positive touch into space and then looked for a line-breaking pass to move the ball into the opposition half and to release a teammate into an attacking position. 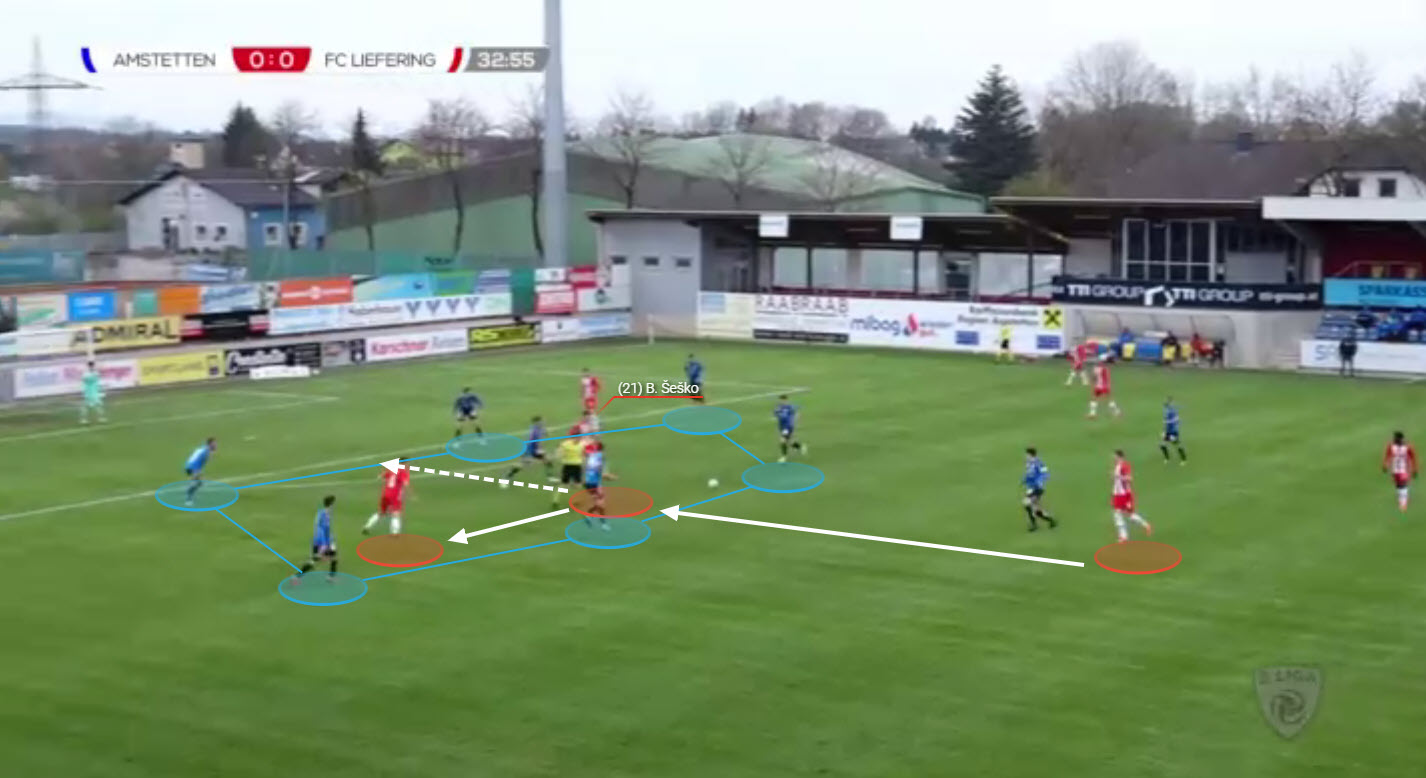 This time we see Sesko in a more advanced position as he receives the ball and then combines quickly with a teammate. This time he has identified a gap in the opposition defensive structure and he moves to occupy this pocket of space, As the ball is played forward and into his feet there is a defender who has tracked this movement. Instead of receiving and taking contact as so many strikers would in this situation he lays the ball of laterally to where a teammate is positioned.

Sesko then makes a second run to break the defensive line of the opposition.

There is a very good reason that the Red Bull network is considered to be one of the premium networks in world football for the development of young players. For every player who makes an impact in Austria and then moves on to more competitive leagues there are others behind them who are waiting for their opportunity to gain regular first-team minutes.

The performances of Patson Daka over the last two seasons have been nothing short of remarkable and I believe that he will be a success at Leicester City. I also believe, however, that Benjamin Sesko has the skill set to be every bit as successful as Daka, if not more so.