On Sunday evening, the 2021 UEFA U21 Championship drew to a close as the tournament’s two best sides competed in the final. Some had hoped for fireworks, similar to Portugal’s 5-3 win over Italy a week before, but what occurred was an impressive German performance that kept the Portuguese restricted to mostly half chances as the Germans eked out a 1-0 win.

This tactical analysis gives an insight into the tactics used by both sides in this final, whilst giving an analysis of some key moments that influenced the course of the game.

Germany opted for a variation of a 4-3-3, specifically a 4-1-2-3 with the impressive Niklas Dorsch of Gent playing as the defined single pivot. Ahead of him sat Hertha BSC’s Arne Maier, buoyant from his season on loan with Arminia Bielefeld and FC Köln’s Salih Özcan. Anderlecht’s Lukas Nmecha scored the winning goal, leading the German attack with Bayer Leverkusen’s Florian Wirtz and Salzburg’s Mërgim Berisha either side of him. The Germans were anchored by a solid back four of David Raum of Greuther Fürth, Freiburg’s Nico Schlotterbeck, Bielefeld’s Amos Pieper and Ridle Baku from Wolfsburg, with Mainz 05’s Finn Dahmen in goal.

As for Portugal, they opted for a 4-3-1-2 with Diogo Costa of Porto in goal protected by a back four of Manchester United’s Diogo Dalot, Familicao’s Diogo Quierós, Diogo Leite of Porto, an Moreirense’s left-back Abdu Conte. Their midfield four consisted of Benfica owned midfielder Florentino Luis in the pivot and Port owned Vitinha on the right. Both of these players have been on loan at Monaco and Wolves, respectively. Sporting’s Daniel Braganca played on the left and the impressive Fabio Vieira, also of Porto, in the 10 role. Their front two was Dany Mota of AC Monza and Sporting’s Tiago Tomas. 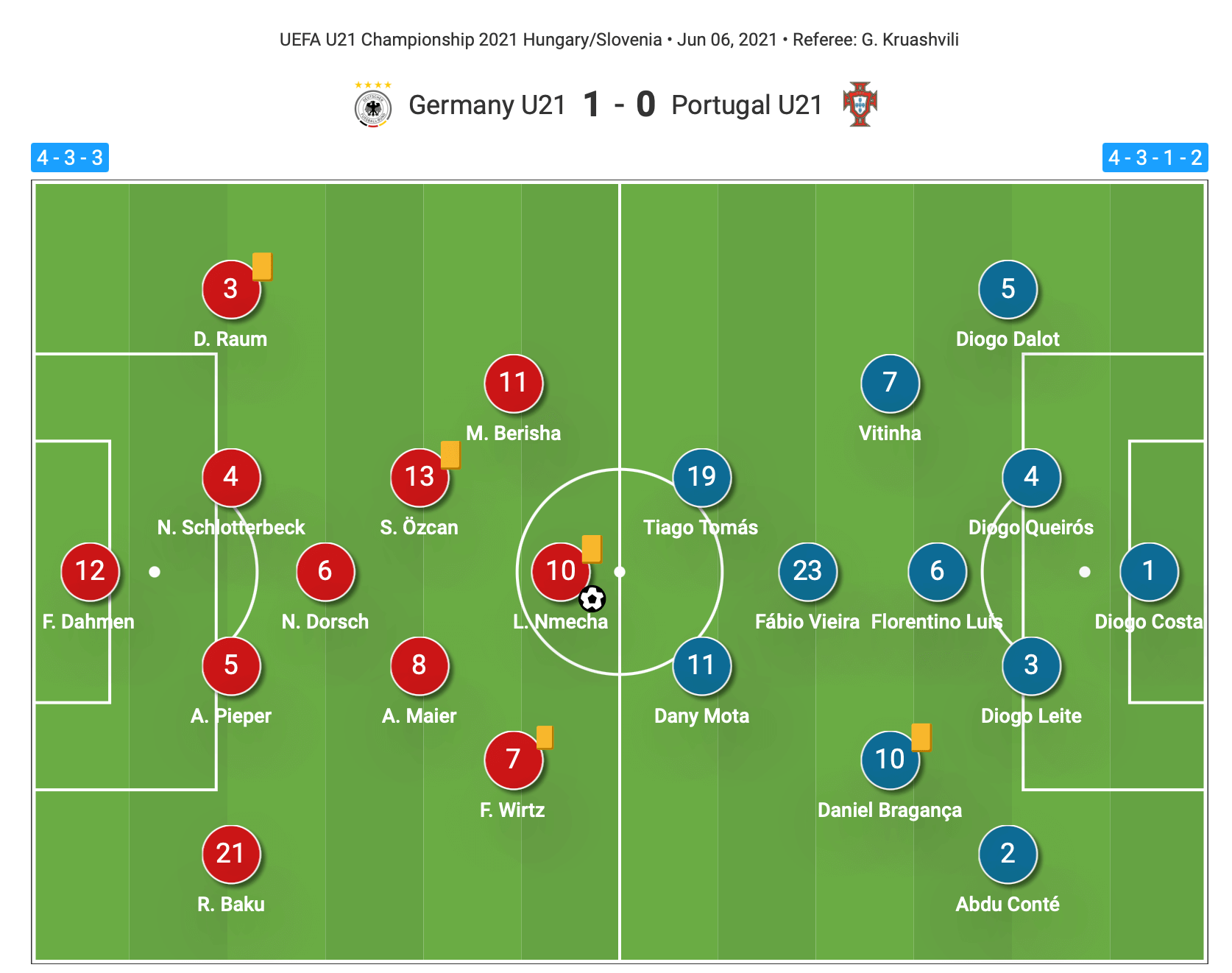 Portugal’s aim to exploit the right side

Whether or not his long term future lies with Manchester United, Diogo Dalot did himself no harm with his performance in this fixture, and frankly the whole tournament. The right-back, who has just finished a loan spell with AC Milan, showed outstanding attacking talent throughout this game, and was one of Portugal’s most dangerous threats going forward.

We can see by examining the image shown below that Portugal based the majority of their attacking play down this flank. 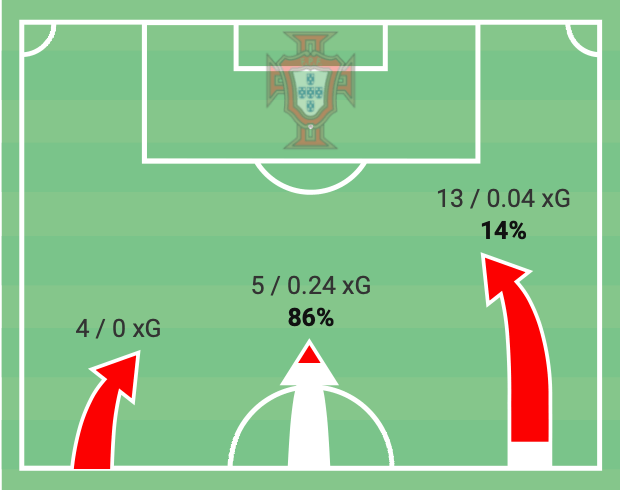 13 of their positional attacks came down the right side, compared to just four from the left. Interestingly, they registered just a 0.04xG from those 13 positional attacks, which shows how well Germany defended.

Again we can further see what Portugal’s attacking intentions were by looking at the pass map from this game, shown below. 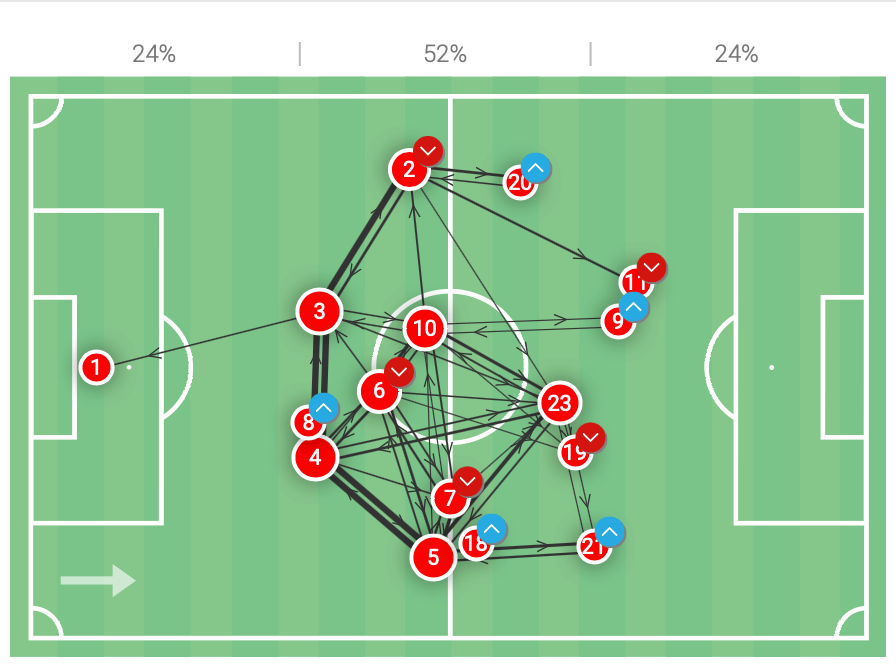 Dalot’s average position is marginally higher than that of left-back Abdu Conte, but we can see that so much more of Portugal’s passing focused towards this right side, with Tiago Tomas and Fabio Vieira favouring this area of the pitch.

Dalot was frequently used as an outlet from which Tiago Tomas or Fabio Vieira could then use to structure their runs in behind. Dalot would play high and wide, and as the ball was played forwards to him, preferably with that diagonal ball shown below, this would draw Raum out from Germany’s defence. One of Tiago Tomas or Fabio Vieira was then able to make that run in behind which Dalot could simply find by playing down the line. 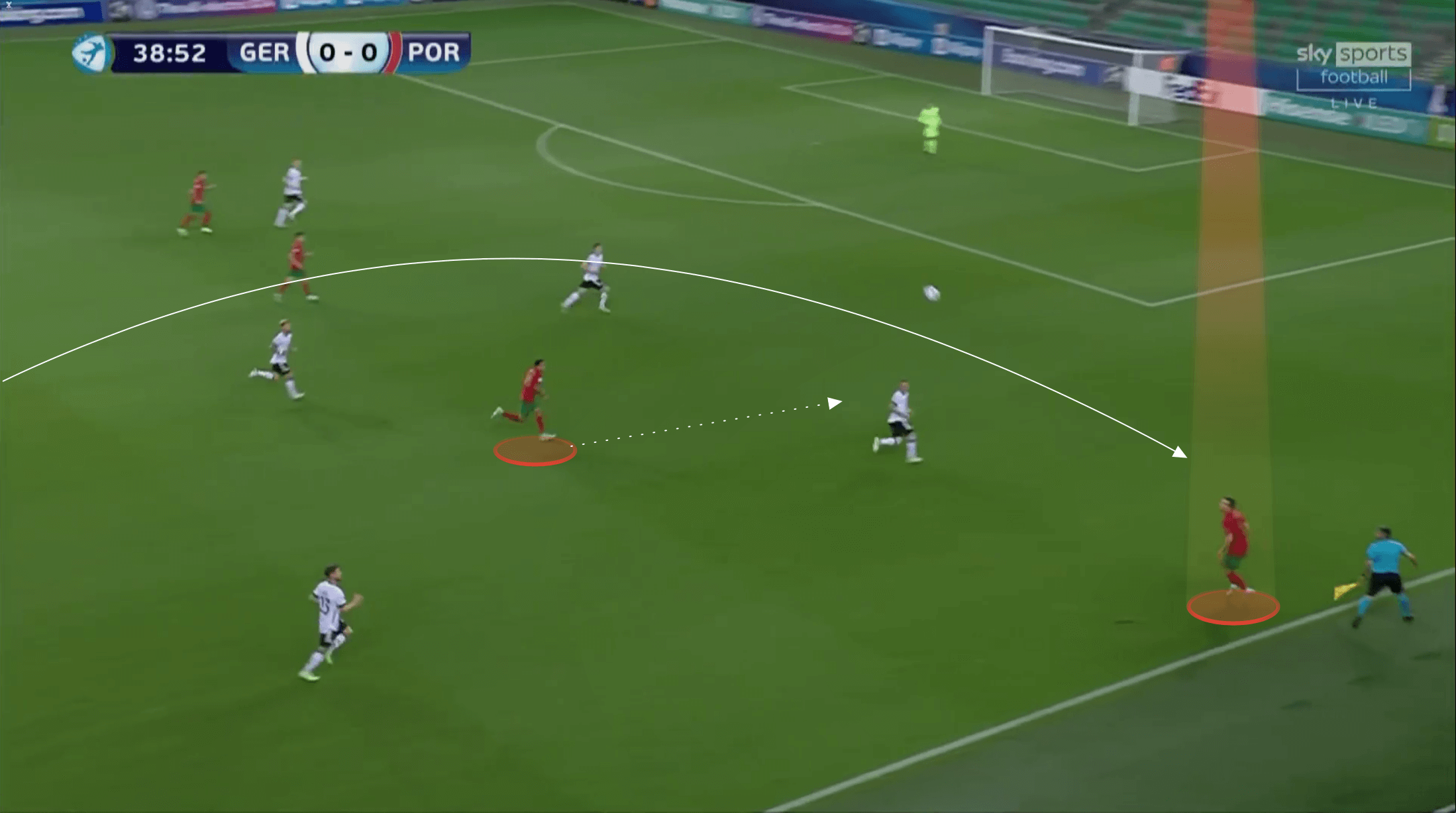 Over the course of the game only Fabio Vieira attempted more shots on goal than Dalot, which perhaps shows the significant role the right-back played. It shouldn’t be assumed that all of Portugal’s football was played down this side though. However, they had clearly targeted Raum at left-back as a potential weak point in Germany’s defence and they structured a lot of their attacks in an attempt to exploit this. Portugal continually looked to draw the defender out and it worked at times.

The next two images show an example of how they were able to draw Raum forwards to create more space for Dalot on the right side.
As they work the ball centrally, they look to play a through pass into that 10 space. Raum has Dalot on his left shoulder but with Germany’s midfield being broken with this through pass, the left-back sees fit to step forward and attempt to intercept the ball or at the very least engage the ball-carrier. 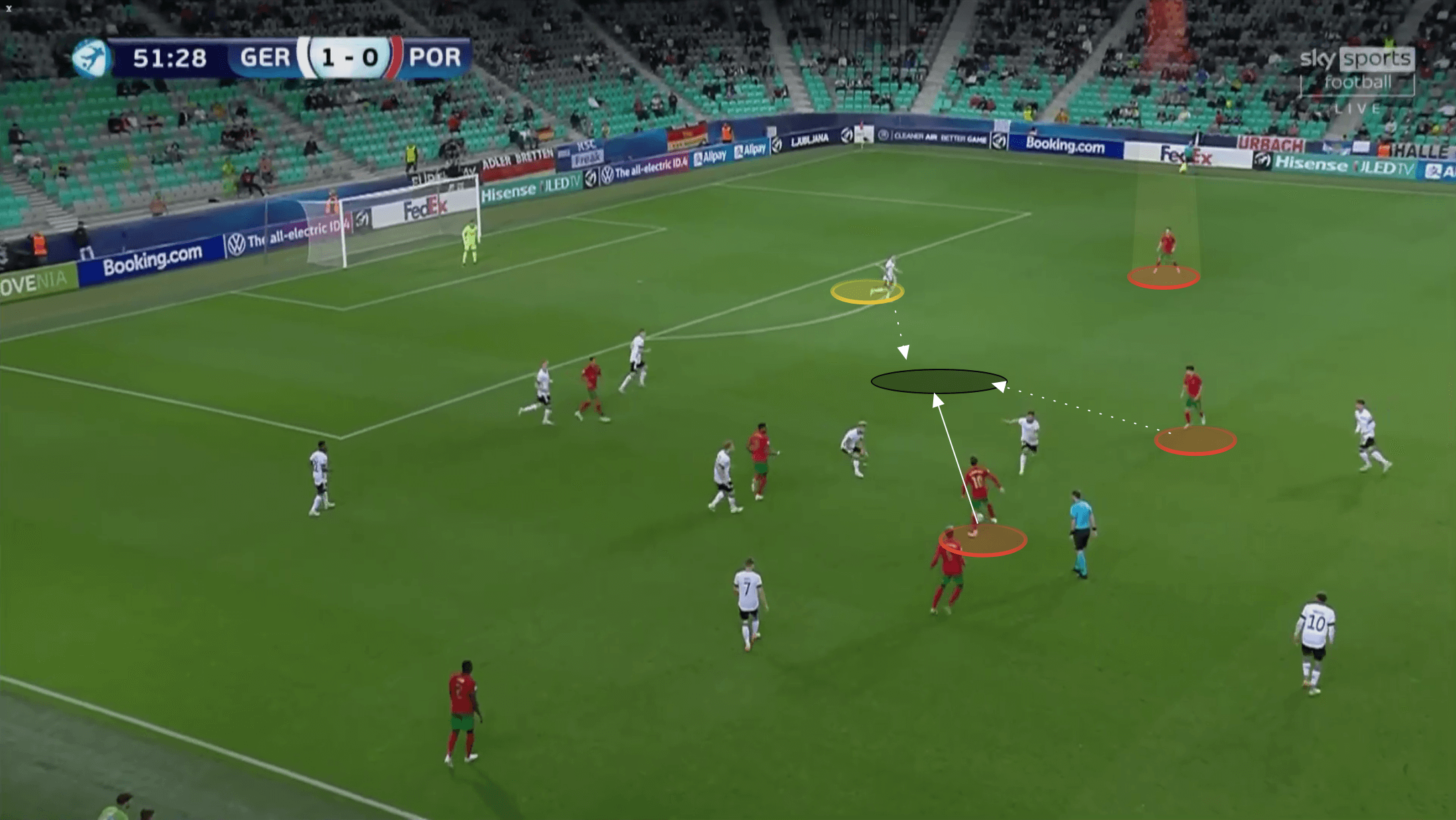 As the ball is received in this space, Raum has been dragged forward and Dalot now has space on that right side to run onto a through pass in behind. On this occasion the execution was off on the final ball from Portugal, but it is nevertheless an interesting sequence showing how they targeted Raum. 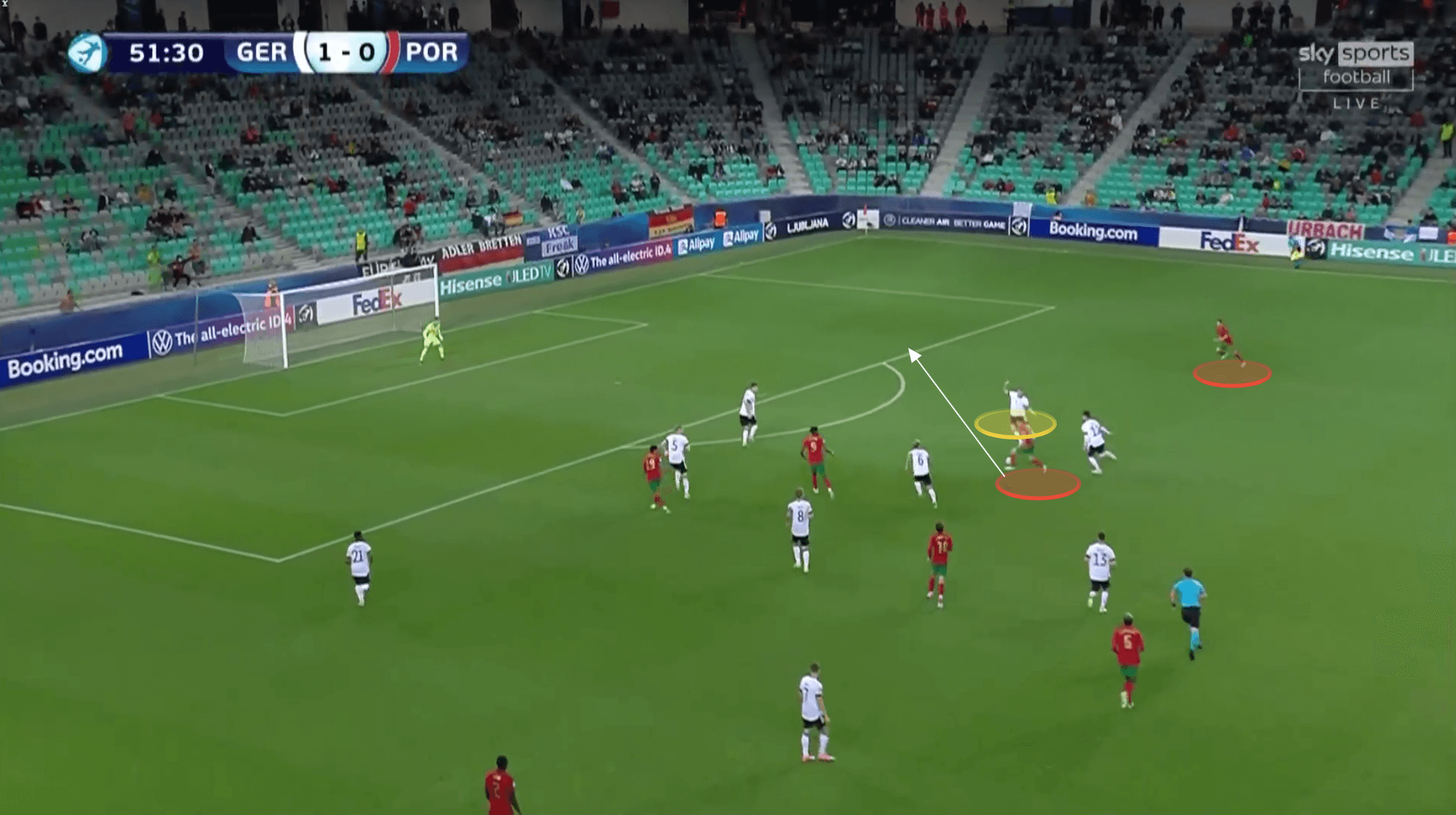 Committing numbers to the attack

Despite the low scoreline, and xG figures which showed the result was just about fair (Portugal 0.47, Germany 1.48), both teams were seemingly cavalier at times about pushing players forward in the attack. Firstly, Portugal played with a relatively narrow front three in moments of the game, and with the influential role Dalot was playing from right-back, this made sense. Fabio Vieira was given the freedom to push up from midfield into the front line as he saw fit, and he showed true attacking talent for much of the fixture and throughout the tournament.

Unfortunately their link up play as a trio was all too fleeting in this game, but regardless, there were moments that caused a real issue for the Germans. Portugal will no doubt have wished they had taken advantage of these attacks and been more clinical.

We can see an example of this kind of attack as the pass is played forward into Fabio Vieira who instantly offloaded the pass to his side. We can see how Dany Mota and Tiago Tomas are already on the same wavelength, with Mota looking to instantly play the pass in behind for his forward teammate. The speed with which this attacking move was executed was something to behold. 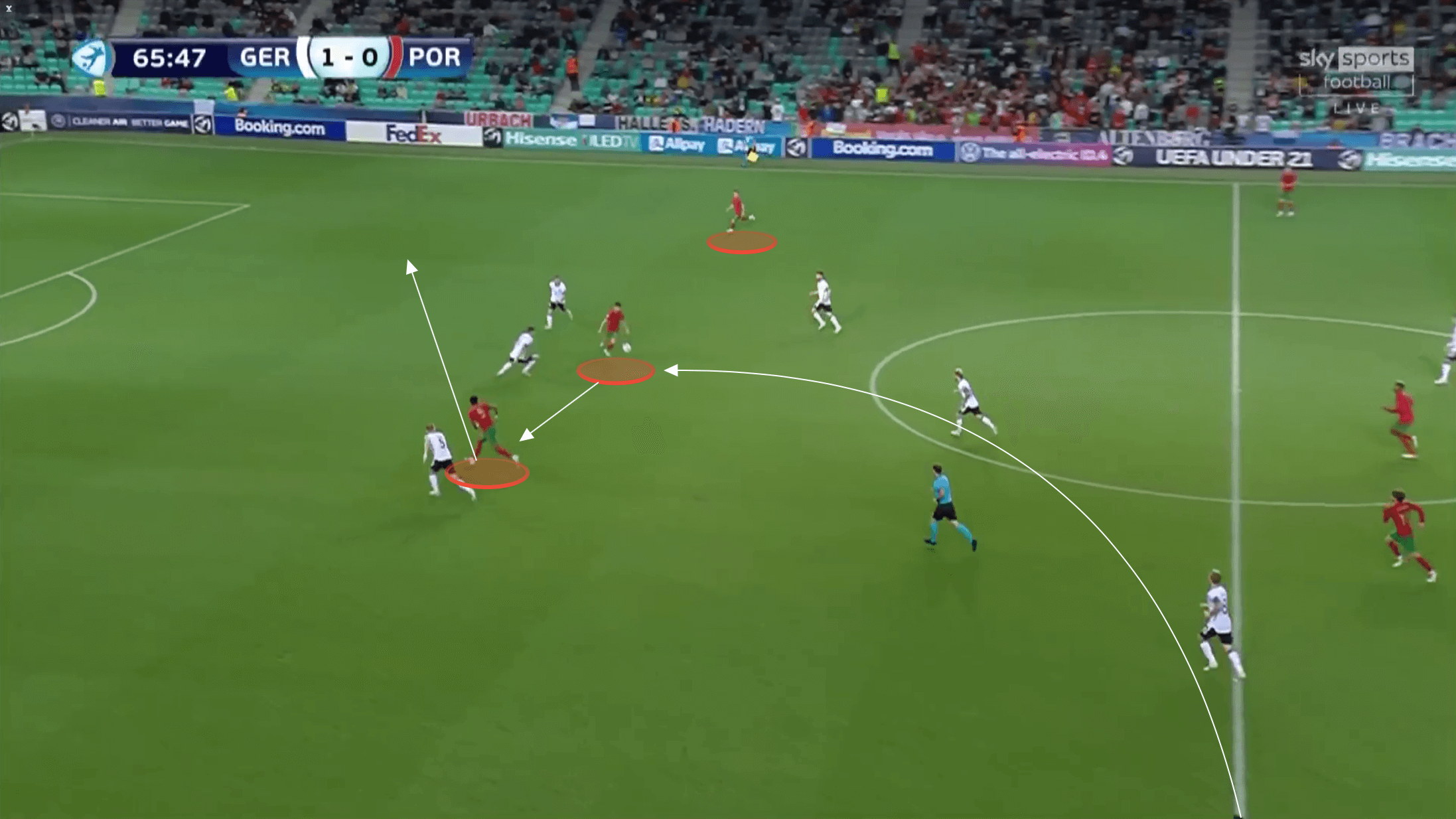 Germany also committed players to their attack, and whilst the Portuguese did so to allow them to combine quickly in tight spaces and play an attacking teammate in behind, the consequences of Germany’s numbers in attack were interesting to observe.

Germany looked to commit numbers across the width of the pitch, as we can see in the image below as Baku drives forward in possession, with four attackers in the centre of the pitch. 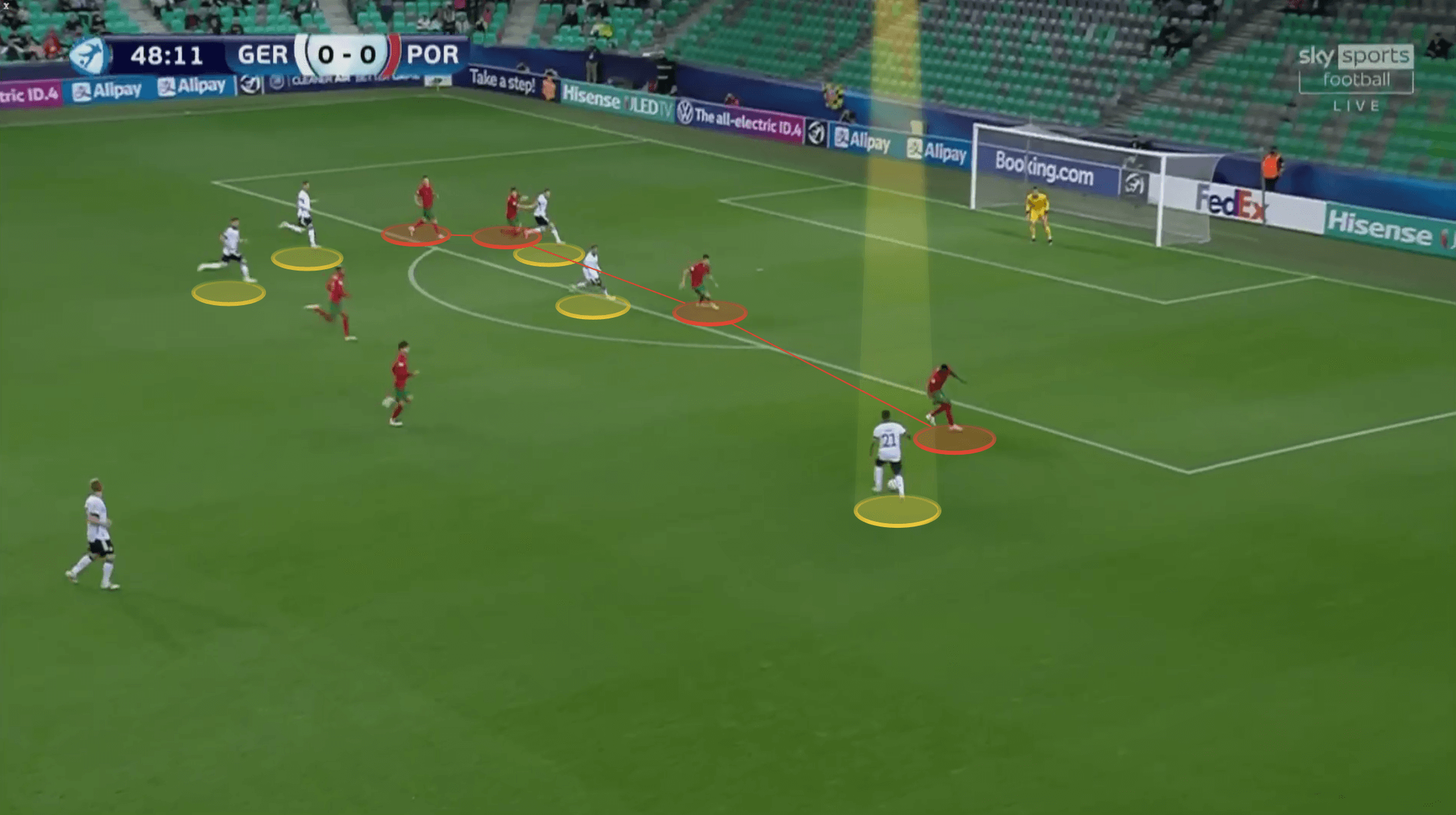 This had the impact of stretching Portugal’s defence but also flattening it. This create opportunities for players to make late runs in between Portugal’s defenders, and the increased space also made it easier to thread through passes through too. 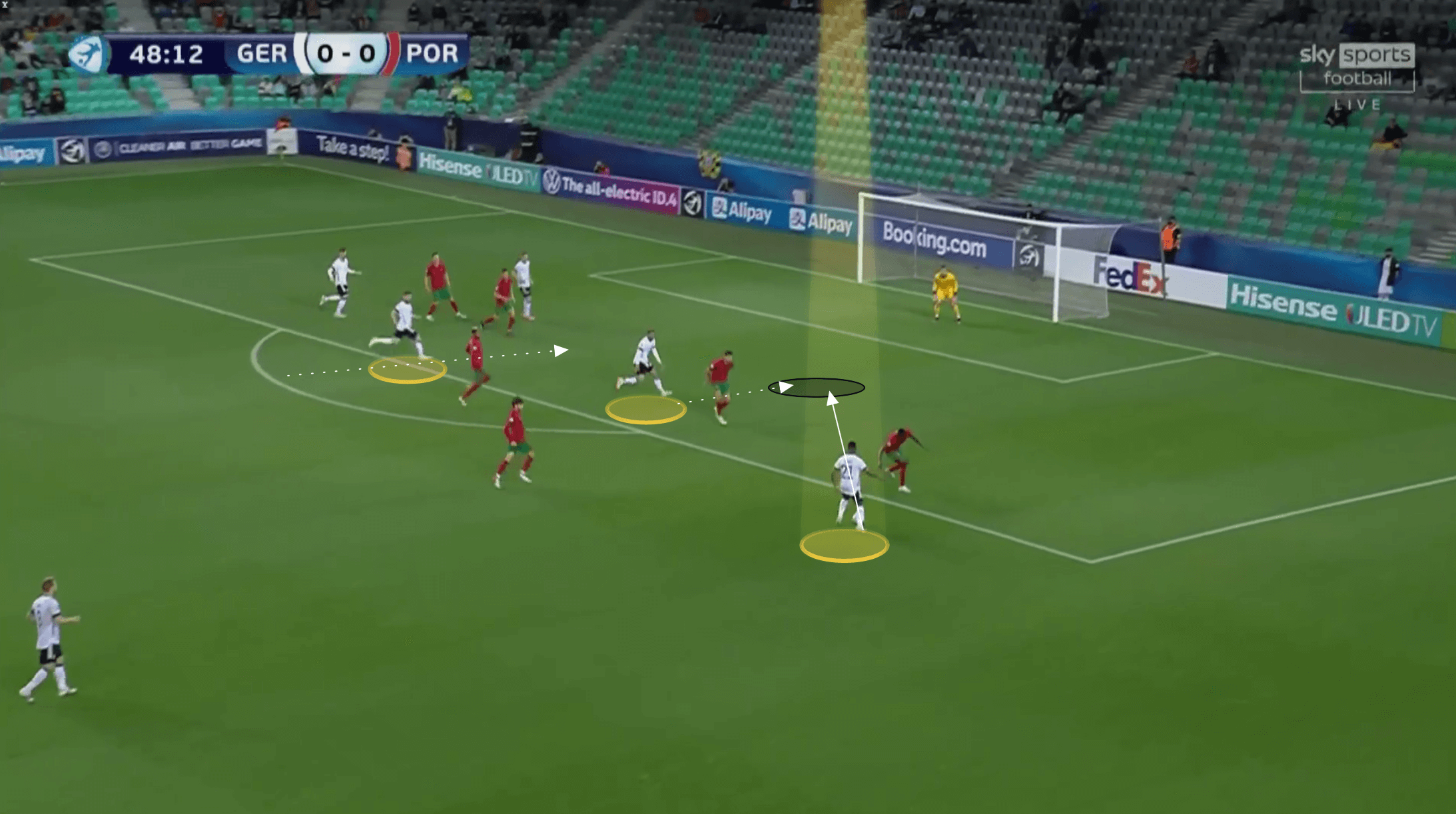 Germany were able to penetrate Portugal’s area with some regularity, with a couple of high xG chances over the course of the game, specifically Nmecha’s goal, highlighted in the image below in black. 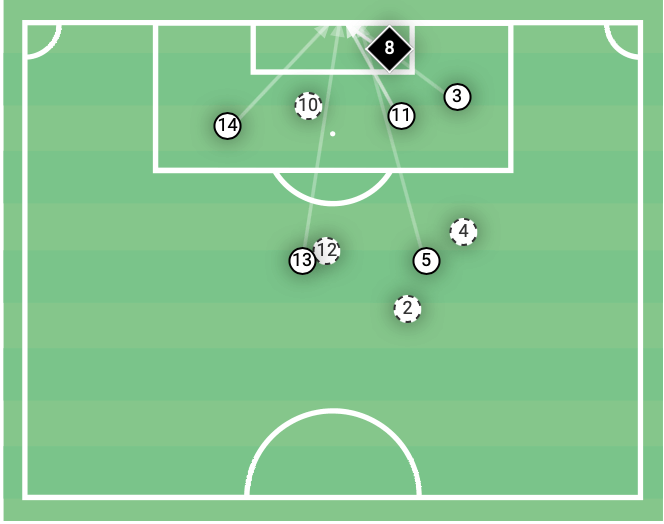 In possession, Germany looked to play centrally and narrow Portugal’s defence. Dorsch was excellent in the pivot role, constantly linking play for the Germans. He would drop deep during build-up, scanning frequently, and linking play from this position. If given space he would look to break lines with his passing or drive forward himself. 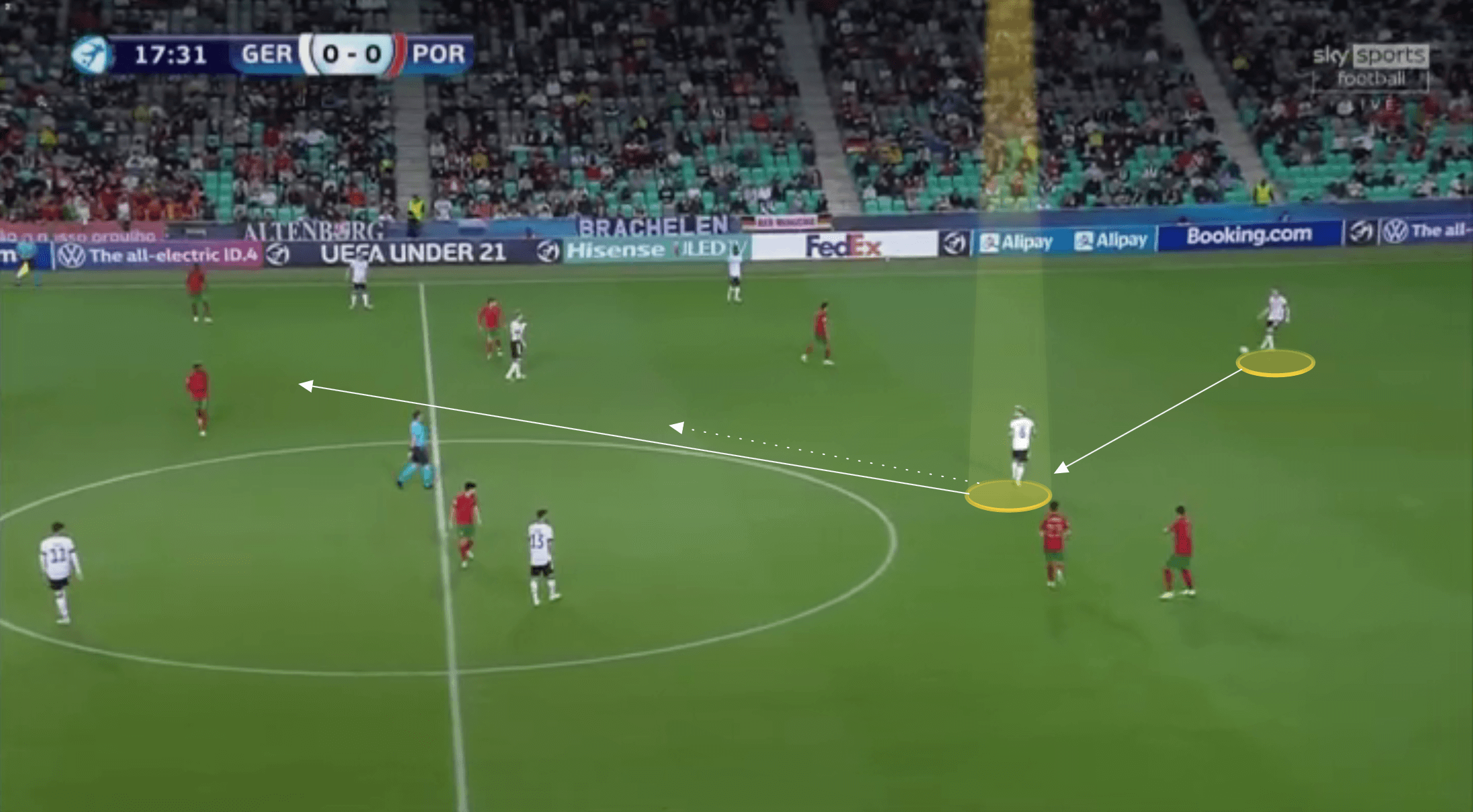 He was instrumental in giving Germany a base from which they could build centrally from, and yet sit deep enough where they could recycle possession easily enough, or hit the wings directly.

We can see in the image below how Germany’s attacking shape is compact, giving them the ability to control possession in this area of the pitch. Note the space on either flank, with Raum already filling the space on the left side. 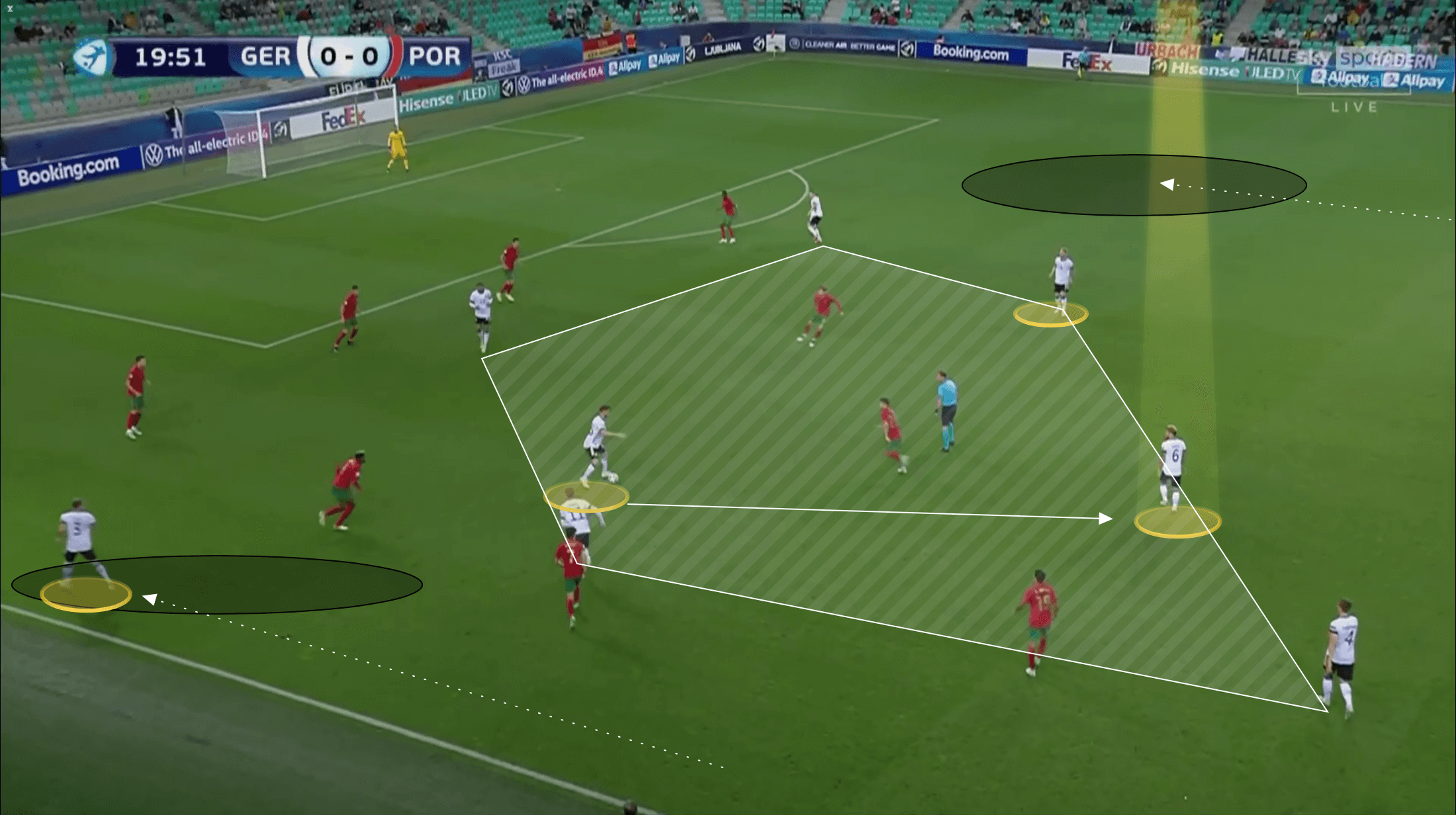 The compact shape would draw Portugal narrow, whilst also facilitating any counter-pressing if possession was lost.

As Portugal were drawn narrow this would allow Germany to exploit space on either flank.
As this play developed we can see how Baku pushed forward from the right-back position, and with Wirtz looping out wide, they could quickly structure an overload on the right side. 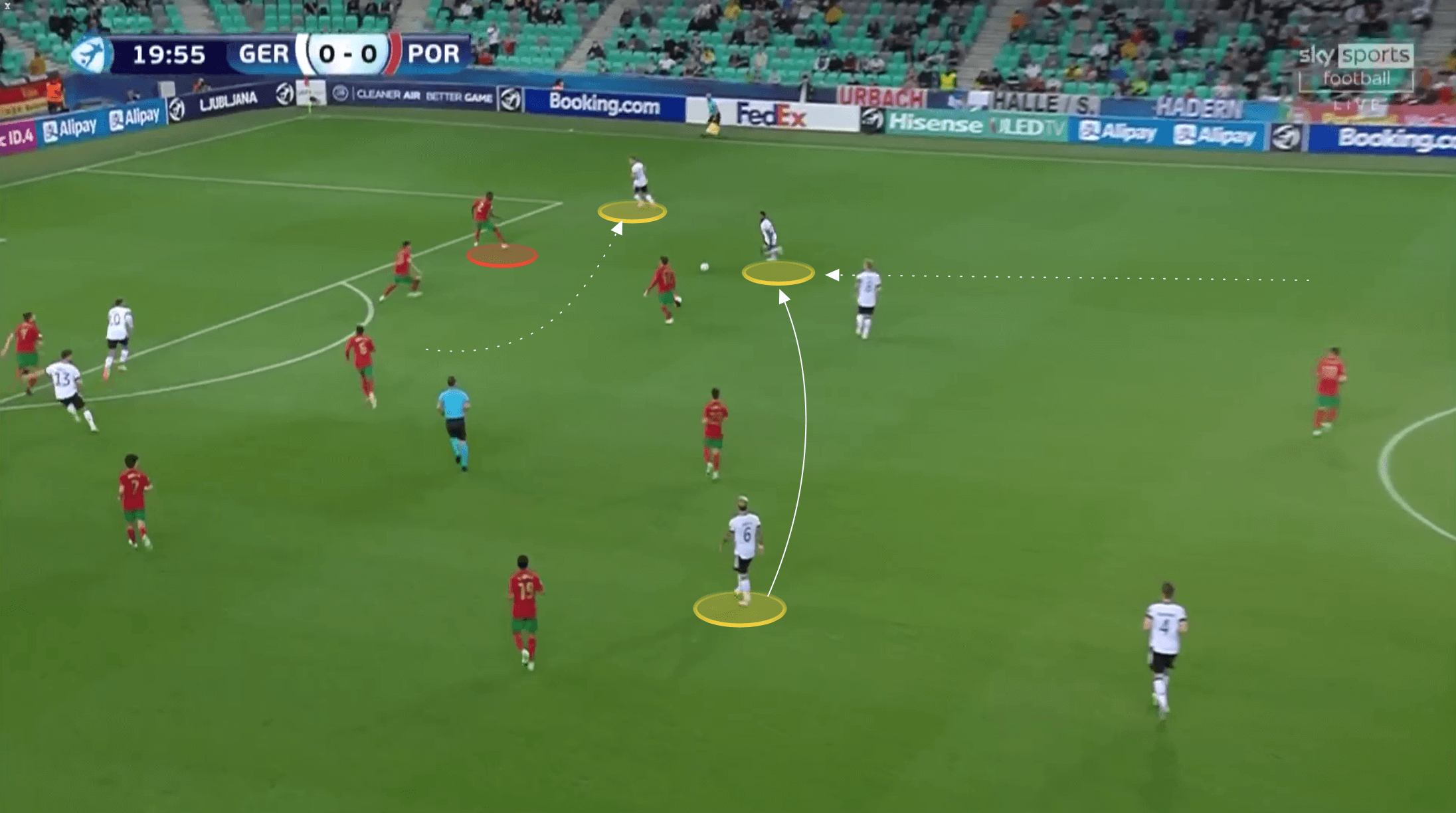 Over the course of the game, Germany were the better side and deserved the win. Some of Germany’s players are at different stages in their career and development though. For example there is five years difference between Dorsch and Wirtz. Nevertheless, in an age where there has been some criticism of the next group fo german talents to come through, this side has shown there is some room for optimism. With Portugal, whilst they will be gutted to not come away with a win here, there are a few talents in their own side worth keeping an eye on – Fabio Vieira in particular. However, one player to keep an eye on is Dalot, who is still somehow only 22 years old. He seems to have had a resurgence in his young career and it will be interesting to see where he plays next season. U21 finals are always interesting to look back on as time passes and we can reflect on the development of these individuals in the period since.