The knockout phase of the UEFA European U21 Championship started this week. In the quarter-finals, we saw some interesting matches where European top talents confronted each other. The Netherlands won 2-1 against France with Myron Boadu late winner which was his second goal in the match. Spain managed to go through against Croatia with the same result, but after extra time. Portugal and Italy was a joy to watch for neutral football fans because we saw 8 goals with Portugal winning 5-3 after extra time. The most dramatic match was Denmark against Germany where the match result was 2-2 after 120 minutes and we witnessed the penalty shoot-out where Germany won after Dahmen saved the penalty from 17-year-old Wahid Faghir. In the semi-finals, we will see neighbour countries Spain and Portugal fighting for the final while the second semi-final will be between Germany and Netherlands.

This preview will show us potential line-ups for semi-final matches and also a short tactical analysis on Spain and Portugal match.

This match is filled with players who are already playing important roles for their teams on the senior level. It will be interesting to see the clash of Bryan Gil and Diogo Dalot. Manchester United loanee played all minutes on this tournament and he is surely one of the stars of the Portuguese squad. On the other side, Bryan Gil impressed in La Liga this season where he played on loan at Eibar from Sevilla which earned him a call-up from Luis Enrique as well. 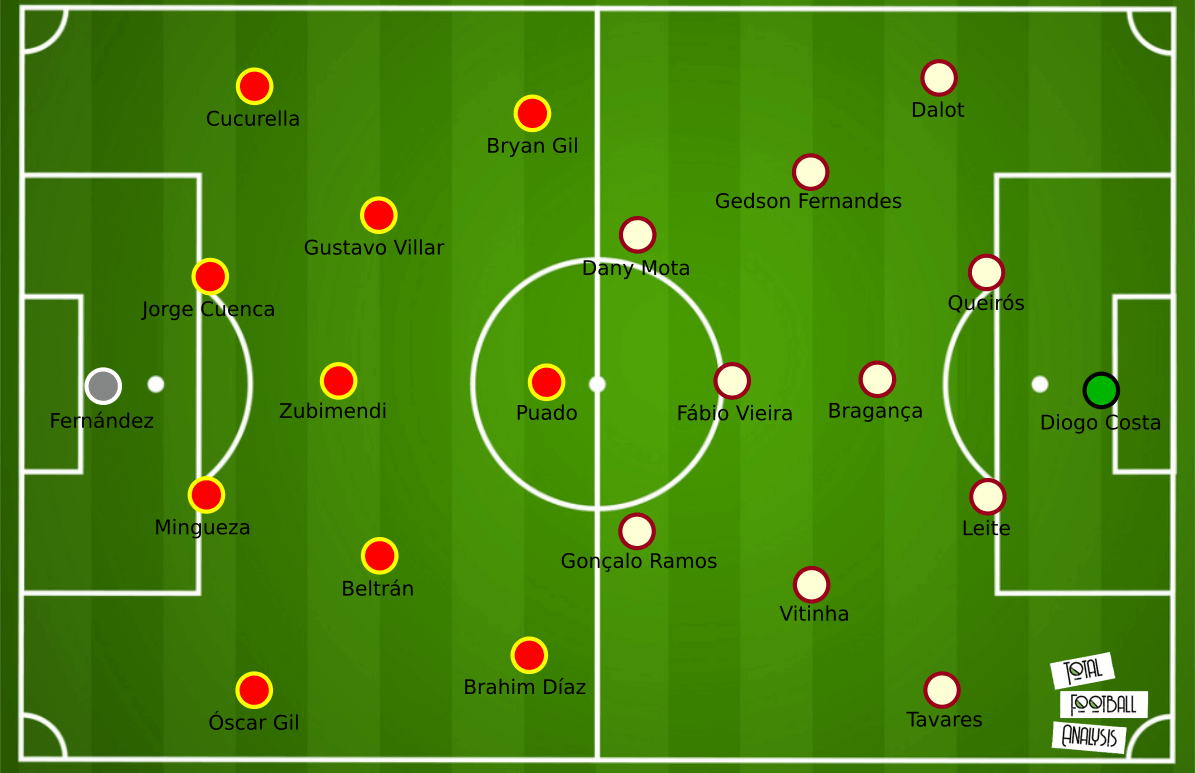 Above we can see potential lineups from both Spain and Portugal. Spain will start with Alvaro Fernandez between the sticks. Hugo Guillamon is suspended which will require slight adjustments in defence and we could see Oscar Mingueza playing as centre-back instead of right-back. The left centre-back should be the usual choice, Jorge Cuenca. On the left-back against Croatia, we saw Adria Pedrosa getting a start, but we expect captain Marc Cucurella to get a start in this match. Given the Mingueza playing on centre-back, Oscar Gil could make his debut for the U21 squad getting a starting spot at his natural right-back position.

In the midfield, we predict that Fran Beltran and Martin Zubimendi will start just like in the match against Croatia. Manu Garcia played the whole 120 minutes and he could start on the bench with Gustavo Villar taking his place. Starting wingers will be their difference makers Bryan Gil and Brahim Diaz. In the centre-forward position, we can expect Javi Puado who was a hero against Croatia by scoring a brace after coming in for Fer Nino in the 59th minute of the match.

On the opposite side, we will see a strong Portugal side which didn’t concede a goal in the group phase, however, they couldn’t keep a clean sheet against Italy and they conceded three goals. Starting goalkeeper is Diogo Costa. In front of him is reliable centre-back duo Diogo Leite and Diogo Queiros. On the right-back, we will see Diogo Dalot while the left-back is Tomas Tavares who is the only player in defence not named Diogo. Tavares is naturally right-back just like Dalot, but both of them are capable of playing on left-back. Head coach Rui Jorge likes to play with a diamond in midfield because he has a good choice of players who are capable of playing in both directions. This diamond contains Daniel Braganca, Vitinha, Gedson Fernandes and Fabio Vieira. Fabio Vieira is the most offensive player of those four. It wouldn’t surprise us if Florentino gets a start instead of one of those four players if they want to get more on the defensive end.

In the attack, they had Francisco Trincao and Pedro Goncalves in the group stage, but for the knockout phase they are not available since both of them are with a senior squad which led to slight changes for Rui Jorge. Against Italy, we saw Dany Mota and Goncalo Ramos in the attack and they showed good finishing with Mota scoring twice and Ramos once. There is no reason for Jorge to change the lethal duo after the last performance.

Through short tactical analysis below we will highlight sequences that could be crucial in this match. 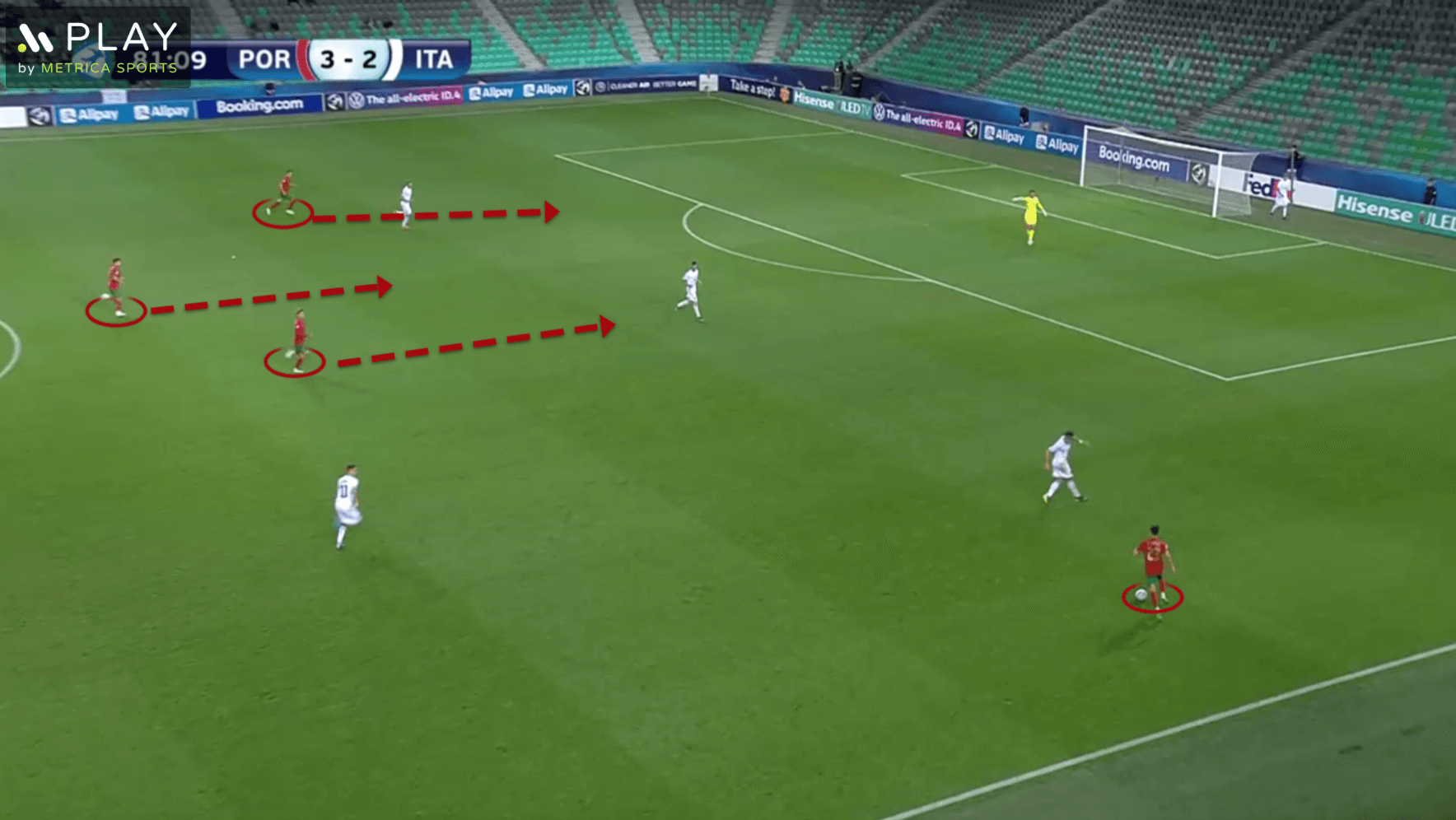 On the image above we can see how Portugal can hurt Spain from the counterattacks. We know that both teams will try to control the possession, however, both teams are very capable of making lethal counterattacks. In this sequence, we can see how Portugal is capable of arriving in numbers in offensive transition. At least two midfielders will join the forward duo in these situations while we can often see Diogo Dalot running from behind to join the attack and offer width. Spain has pacey defenders who can cover space, but they will have to track back quickly to slow down the Portuguese counter-attacks. 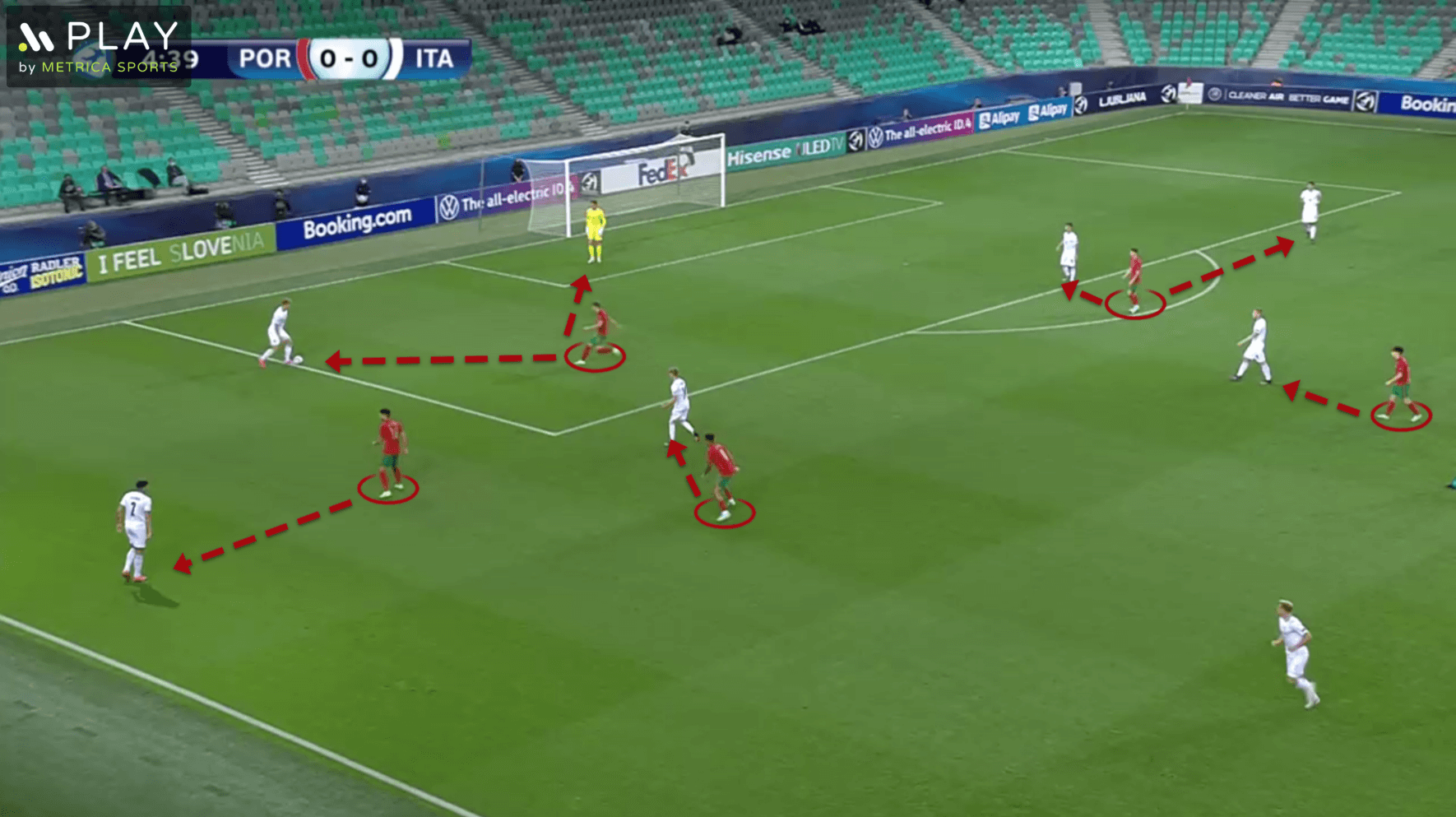 Spain had certain problems on this tournament when they were pressed high in their own third and Portugal likes to press higher disrupting the opponents’ build-up from the back. We can see how they have five players engaged in the opponents third. Because their midfielders are very mobile and durable they can react quickly and press higher while managing to keep the same intensity for longer spells of the match. Spain will have to use halfspaces and dropping wingers in an attempt to avoid Portuguese high pressure. 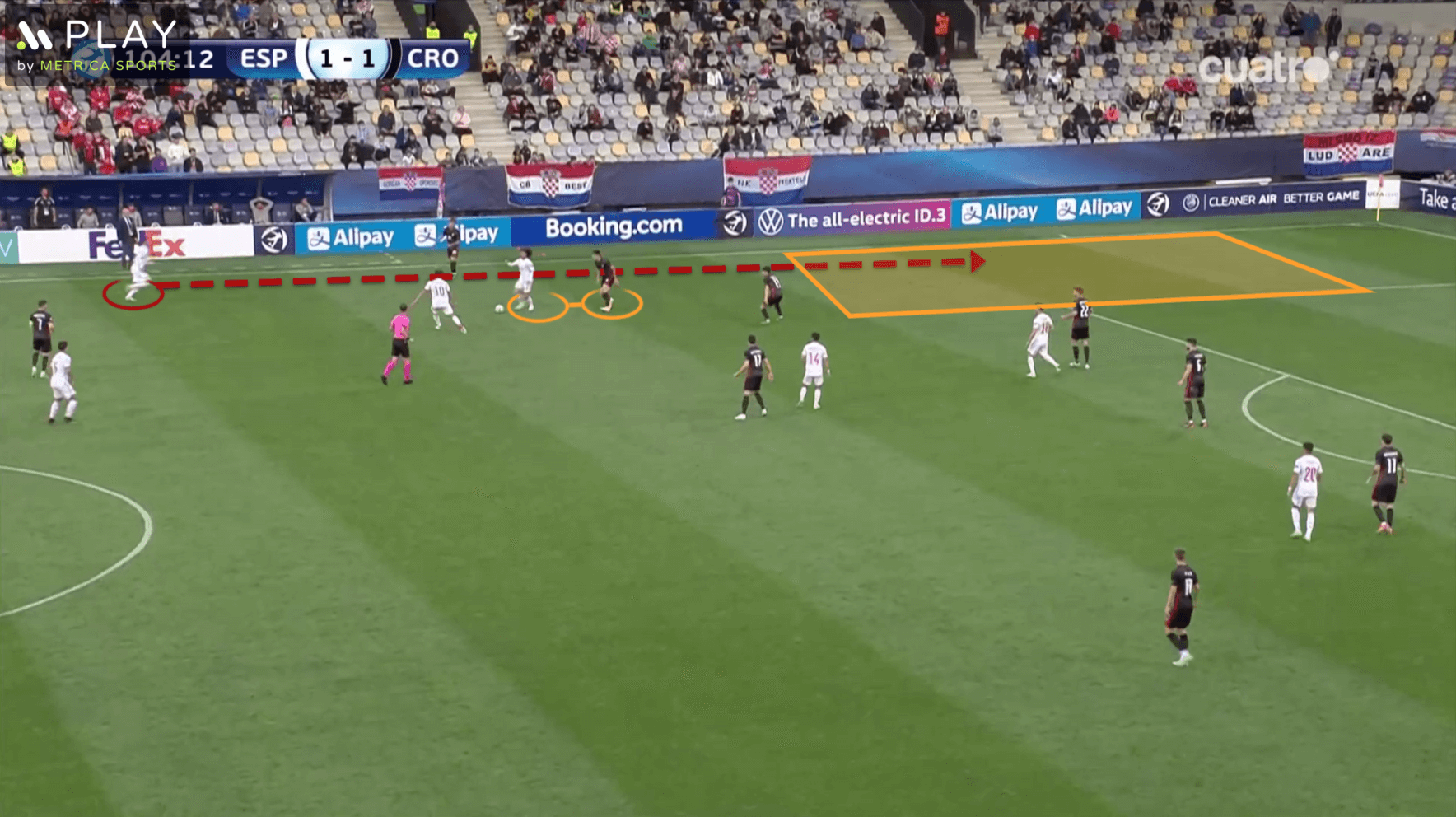 Spanish wingers will play a very important part in this match. We can see the sequence against Croatia where Cucurella who played as left winger dropped deeper with the ball drawing attention from Croatian right-back which opened the space behind for left-back to run into. Villar passed the ball into that space where Miranda made an overlapping run and had a lot of time to make the right action. We can highlight especially the left side where Bryan Gil tends to receive the ball on the touchline before going into 1v1 situations, but if he manages to draw Dalot’s attention into the central area it could open a lot of space for Cucurella especially because Portugal is playing with the narrow midfield tactics.

These two teams managed to get into the semi-final after trailing 1-0. Manchester City forward Lukas Nmecha proved as a lethal forward for the U21 German side by scoring 11 goals in 18 caps and he will look to add to his account more goals in this match as well. On the opposite side, Myron Boadu brace against favoured France led them into the semifinals and they managed to get through without their biggest star Teun Koopmeiners who played in the group phase. 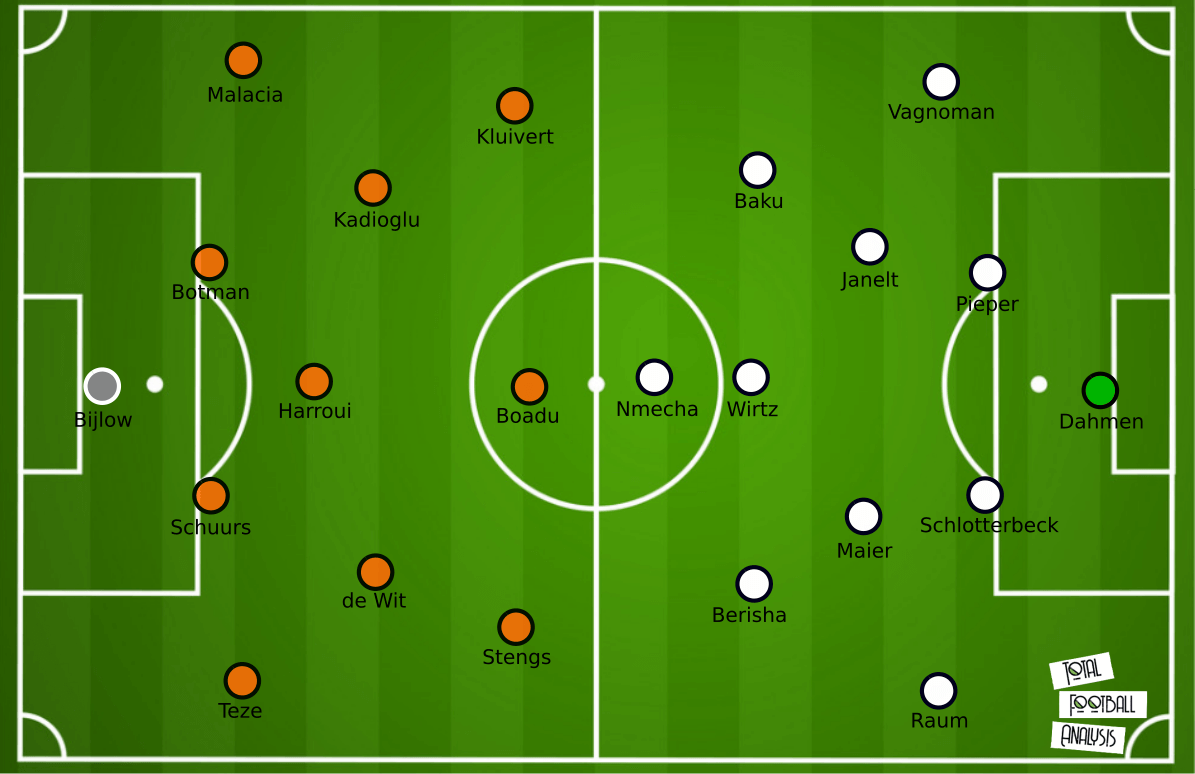 Erwin van de Looi had to adjust his team a lot for the knockout phase after Frank de Boer called Cody Gakpo and Teun Koopmeiners while Noa Lang is injured. On the goal, we will see Justin Bijlow. Ligue 1 winner Sven Botman will occupy the left centre-back position while Perr Schuurs from Ajax will partner him. On the full-back positions Jordan Teze on the right and Tyrell Malacia on the left. PSG left-back Mitchell Bakker could start instead of Malacia cause he is more experienced in important matches.

In the midfield will start trio Abdou Harroui, Ferdi Kadioglu and captain Dani de Wit. AZ Alkmaar forwards Calvin Stengs and Myron Boadu will be accompanied by Justin Kluivert in the attack. We predict Stengs will start on the right-wing while Kluivert playing on his natural left-wing position.

German head coach Stefan Kuntz won’t change much of his usual tactics. Penalty shootout hero Finn Dahmen will start on goal. New Hoffenheim signing David Raum will play on left-back while Josha Vagnoman will start on the opposite side. The centre-back duo should be Nico Schlotterbeck and Amos Pieper.

In the match against Denmark, Arne Maier and Anton Stach started as defensive midfielder duo, however, we expect newly-promoted Premier League player Vitaly Janelt to start instead of Stach. Highly-valued Florian Wirtz will start in the attacking midfielder position, he is the youngest player in the team, but he is responsible for the creation of this team. Ridle Baku will start on the right side while Mërgim Berisha will start on the opposite side. The centre-forward position is reserved for their top goalscorer Lukas Nmecha.

These two teams faced each other in the group phase and that match finished with a 1-1 result. It was a realistic result given their performance in that match. Kluivert scored for the Netherlands at the start of the second half and then Nmecha levelled the score in the 84th minute. We expect once again a very close match where even the slightest mistake could decide the match. Both teams had a tough time reaching the semifinal after such close quarter-final matches and they will be motivated to get into the final.

We can expect very interesting semifinal matches where there are no clear favourites. All teams will look to reach the final and prove that they are the best youth squad in Europe. It is a little shame that some of the best players are involved in senior squads and won’t be able to help their peers in their quest for the gold medal.