Alexander Schlager of LASK Linz and Cican Stankovic of RB Salzburg are clearly the two best goalkeepers in the Austrian Bundesliga and also the best for the Austrian national team. Now, we have due to that, two interesting aspects. Firstly, the question is who is the number one in Austria’s national team. Secondly, usually RB Salzburg try to buy always the best players in each position of the Austrian Bundesliga if they are still young and have potential to improve. In light of this, It’s reported that the 24-years-old goalkeeper Schlager is a target of RB Salzburg.

Considering these two aspects, we will now look in this tactical analysis in the form of a scout report at both of these goalkeepers and compare them to answer who should be Austria’s number one and if RB Salzburg should spend their cash on Schlager.

Before we talk about both keeper’s strengths and weaknesses and look at in-game examples, we compare the stats of the goalkeepers of the two best Austrian sides at the moment. You can see a bar graph below with the statistics of both goalkeepers for this season in the Austrian Bundesliga. 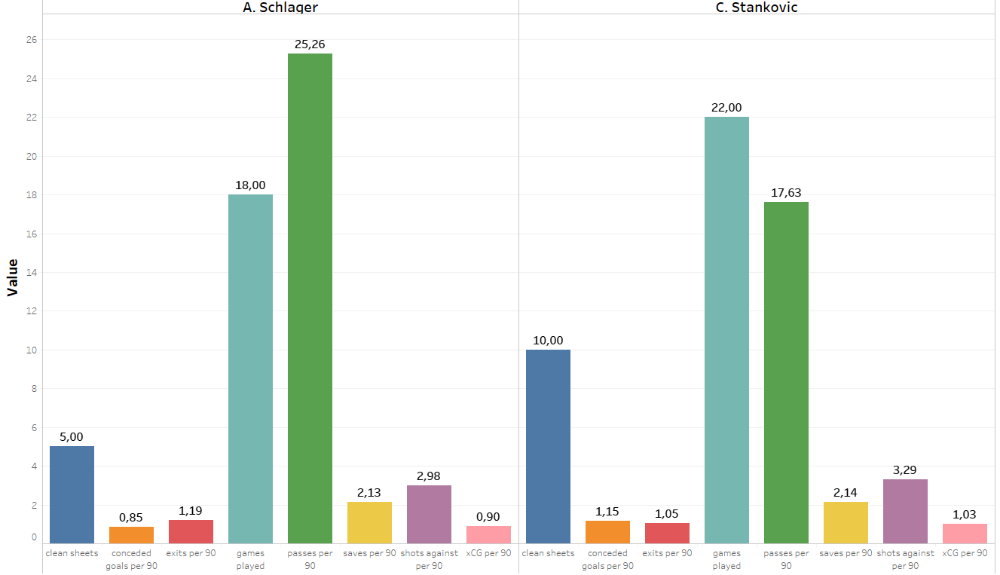 First of all, you have to consider that Schlager played in every single game of the 22 matches in this year’s campaign while Stankovic missed four games as he got injured in the UEFA Champions League match against Napoli.

However, still we can see that Schlager has way more clean sheets with 10. The 24-years-old Austrian was able to keep a clean sheet in 45.45% of his matches in the Austrian Bundesliga while Stankovic just finished 27.78% of his games without conceding a goal. Anyways, these values don’t say that much as the goalkeeper is not the only one who is responsible for keeping the clean sheet as he has still 10 men in front of him who should avoid that the opposition even gets in the right position to score.

However, one kind of value which stays out is the difference between the conceded goals and the expected conceded goals for both men. While Schlager conceded fewer goals than expected, Stankovic’s number for expected goals is lower than the one for the actual goals he faced. While these values tell at least a bit more the truth compared to the ones for the clean sheets, it’s still almost impossible to rate a goalkeeper’s qualities and strengths or weaknesses by looking at his stats. Due to that, we will now investigate both keeper’s tactics and behaviour more detailed in the second part of this tactical analysis, but also try to come back to the stats to check if we can see a correlation.

Before we look at the goalkeeping abilities of Schlager who was during his youth at RB Salzburg and moved to LASK Linz in 2017, we also have to note that he is pretty strong with the ball at his feet. He plays on average 11.97 short passes per game with a success rate of 97.5% and 13.29 long passes of which 73.7% arrive at a teammate. Considering this, he plays clearly more long passes than Stankovic (5.86) but still has a better success rate what has two reasons.

Firstly, even though long balls are part of both teams’ tactics, RB Salzburg mainly use them to then start the counter-pressing in the higher area while LASK have with Klauss and Marko Raguž two tall forwards who can win the aerial duels compared to Salzburg’s smaller strikers. Secondly, Stankovic often plays uncontrolled long balls when he comes out of his goal as we will see later in this tactical analysis while Schlager mostly plays well-planned and clever long balls like the one below. 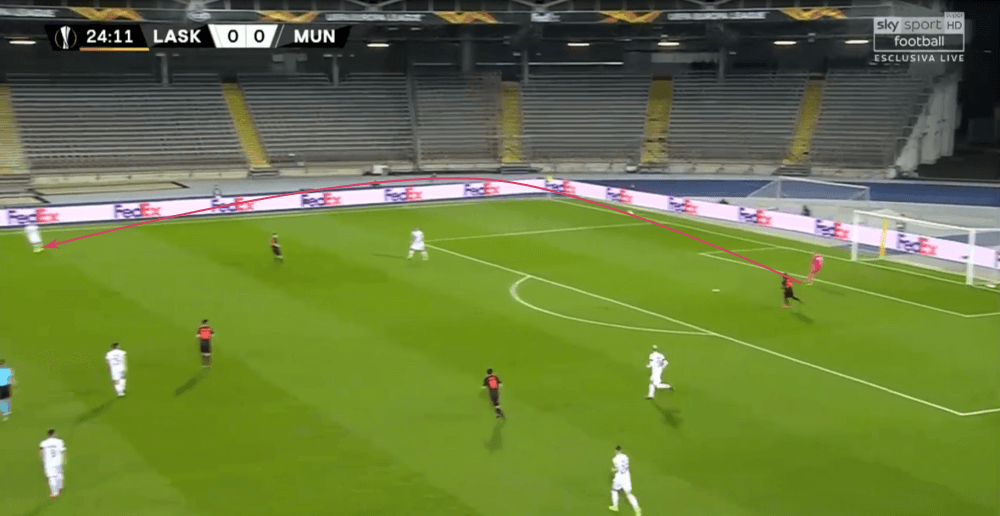 Next, we analyse the qualities of Schlager when it comes to avoiding goals and his goalkeeping abilities in general. As first point, you clearly need to mention that the 24-years old greatest strength are surely his saves. The Austrian keeper already showed several really impressive saves when the opponent shot from about 18 yards. No matter if they are low thriven or placed in the top corner, Schlager is great in stopping these shots like the one from Manchester United’s winger Daniel James in the situation below. 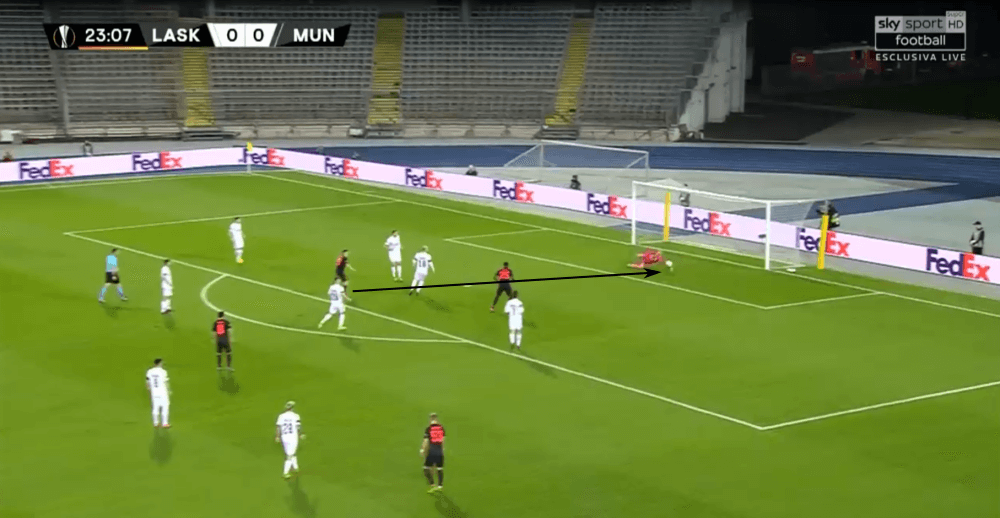 Anyways, not just stopping shots which are taken at the edge of the penalty box is one of the great strengths of the 24-years-old Austrian keeper, but also his reflexes to avoid conceding a goal when the opponents takes the shot from a short distance inside the box are astonishing.

His great reflexes are also one of the main reasons why he concedes on average just 0.85 goals per game even though his xCG vale is 0.9 as we can often see how he avoids a goal after a shot from a quite short distance with a great reflex as in the situation which we can see below in the ÖFB Cup fixture against RB Salzburg. 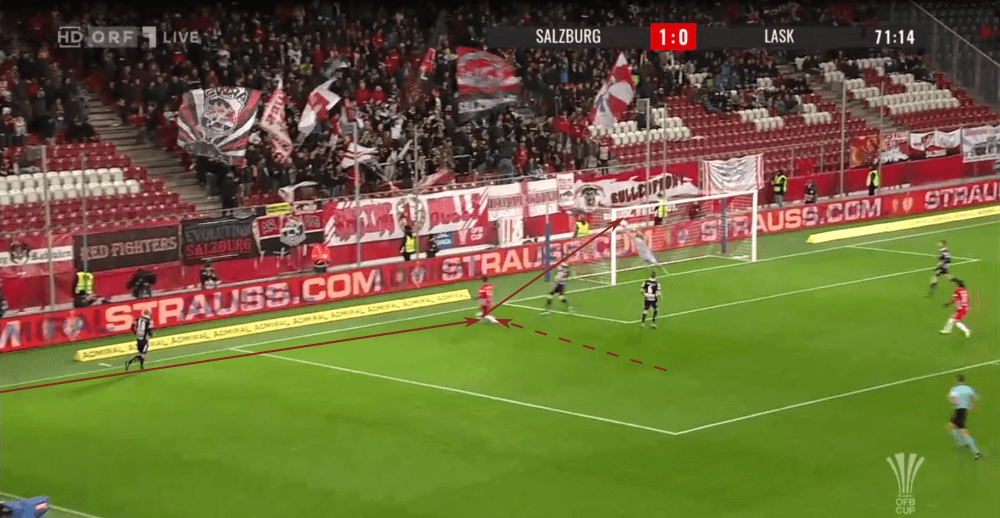 When the opposing team tries to create a goalscoring chance with the aid of a through pass, then Schlager is neither a keeper who permanently storms out early to clear the ball before the attacker can reach it nor is he a goalkeeper who stays in his goal and doesn’t come out. He’s somewhere in between these two kinds of keepers.

However, when it comes to corners or high crosses in general, Schlager never seems to feel confident in these situations and mainly stays in his goal except the ball enters the six yard box and then you can see that he rarely comes out full of belief. Other goalkeepers like the legend of Bayern Munich, Oliver Kahn, come out in these situations with all their aggressiveness and wanted to get the ball. On the other side, Schlager who stands just at 6’0″ what is quite small for a keeper, is clearly not someone who likes to come out to clear corners as we can see in the example below where he collides with his teammate Gernot Trauner. 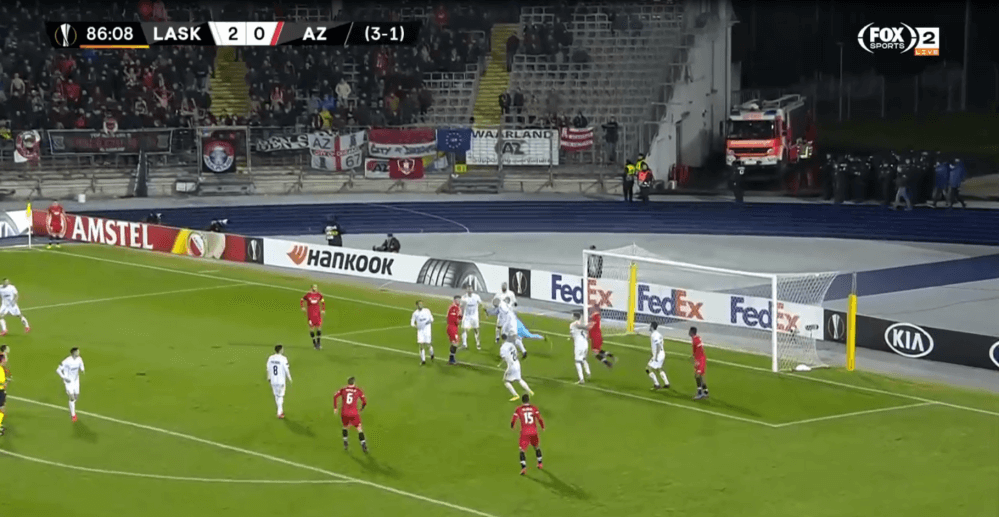 Now, before we talk about Stankovic’s abilities in the goal, we once again take a quick look at his passing stats. He plays on average 11.77 passes per game with a success rate of 99.1% and 5.86 long balls of which 72.3% are successful.

The interesting thing about Stankovic’s role during the build-up is not his passing ability itself, but that we can often watch him several times per game to position outside of his penalty box between the two central defenders as they create a  kind of a back three. Of course, this depends on the defensive tactics of the opposition as he just does this when the opponents of RB Salzburg don’t press in at them high up the pitch. In the shot below we can see a perfect example in the match against Sturm Graz. 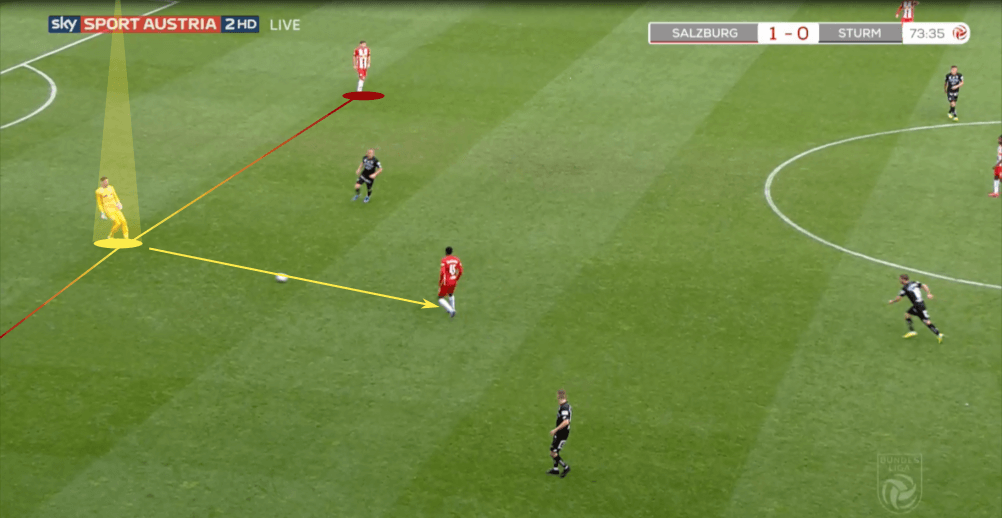 As the next part of this tactical analysis in the form of a scout report, we’ll look at the abilities of Stankovic in goal who stands at 6’1″ and is just slightly taller than Schlager. The 27-years-old Austrian is solid in saving shots which are taken at the edge of the penalty box but it’s not among his greatest strengths like it is of Schlager.

However, his reflexes to stop shots from a close range are also really impressive as we can see in the example below in which he saves a header of LASK Linz’s Klauss. 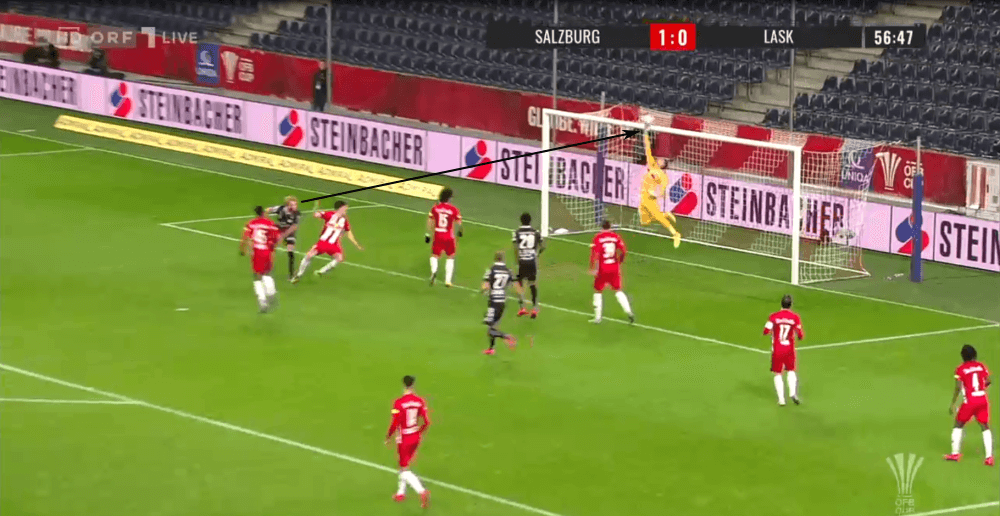 Also, Stankovic is amazing in using his legs to stop shoots inside the penalty box and also when it comes to one-on-one situations. This aspect of the style of play of the 27-years-old really stands out as he avoids above-average often goals by using his legs as in the example below. 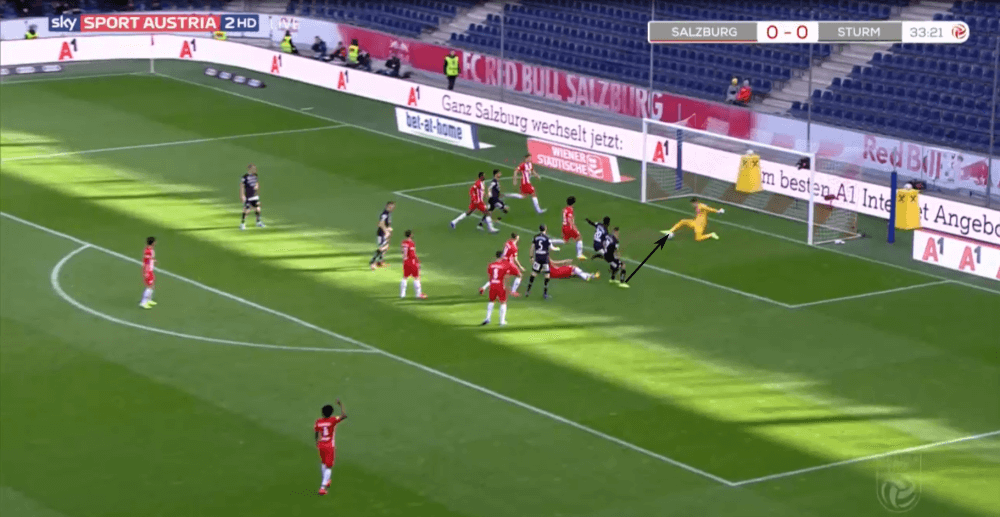 Another aspect of the style of play and tactics respectively of RB Salzburg’s keeper is that he is permanently positioned quite wide ahead of his goal. The main reason for that is that Jesse Marsch’s team defend during the majority of the time with a last line of defence which is positioned really high (especially during the pressing or counter-pressing). This provides the opposition quite a lot of space behind the defence which logically they want to exploit with the aid of through passes.

To beat the opponent in the race for the ball, the 27-years-old Austrian positions already quite early in front of his goal as we can see in the example above. As then the through pass is played, he sprints forward to intercept the pass and clear the situation. 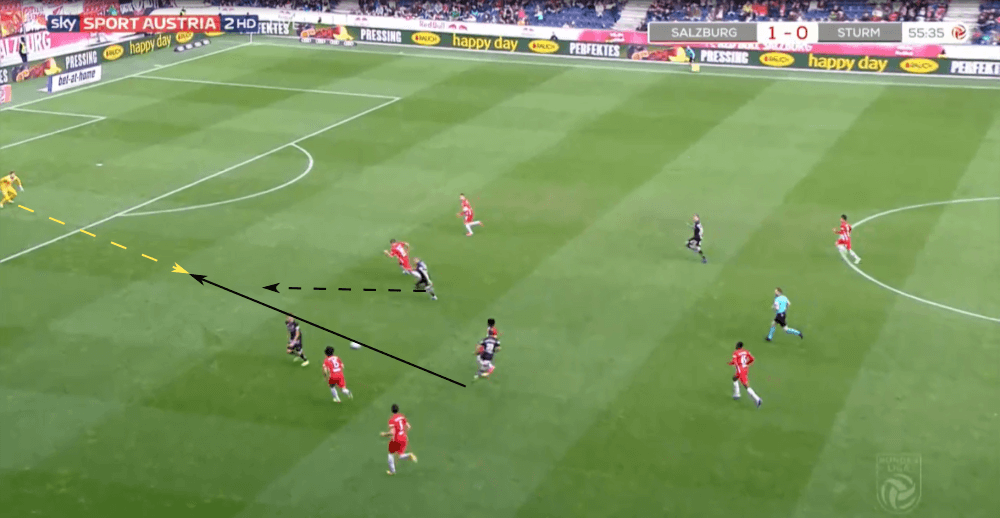 As already mentioned earlier in this tactical analysis, one reason for the Stankovic’s worse success rate for long balls compared to Schlager is that in situations like the one above he often plays a long uncontrolled ball to solve the situation.

Anyways, as a last point we once again need to talk about the behaviour when it comes to corners as this is also clearly not the greatest strength of Stankovic. In fact, he also doesn’t seem to be that confident in these situations (same as Schlager) and rarely comes out to punch the ball away and if so, he doesn’t seem to be confident at all. Both keepers need to work on that. 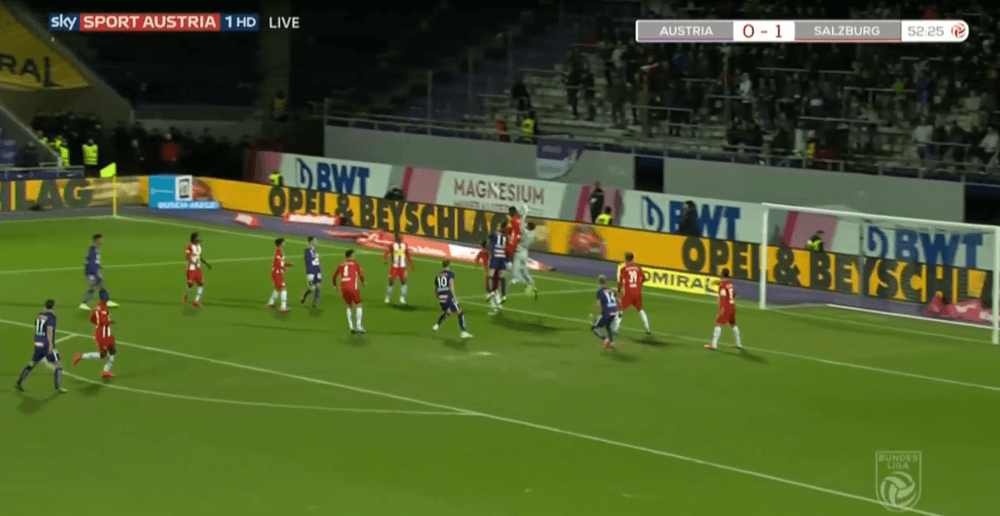 To put it in a nutshell, the basic profile of the two goalkeepers is quite similar as both have great reflexes, but aren’t confident at all when it comes to corners. However, Schlager’s saves when the shots are taken from a greater distance are quite impressive while Stankovic’s reflexes with the legs are often really outstanding.

Considering all these aspects, it’s pretty hard to pick a player for the national team. The one thing which clearly speaks for Schlager is that he is more than three years younger compared to RB Salzburg’s keeper.

However, in my eyes it wouldn’t make that much sense for Salzburg to buy Schlager as then they would have the two best Austrian keepers (who are about on the same level) and at least one of these two wouldn’t get enough time on the pitch and will become unhappy. Due to that, the transfer of Schlager would just make sense if they sell Stankovic to avoid that any one of these two would get not enough appearances.