The league’s newcomers, Nashville, kicked off the MLS‘ 2020 season in front of a packed Nissan Stadium of 59,000 fans, facing Atlanta United, (2018 MLS cup winners and 2019 semi-finalists) were the travelling side for this fixture. Although a 2-1 win for Atlanta wasn’t the result that Nashville had hoped for, there were still some positives that could be taken from the game.

In this tactical analysis, we look at what ultimately became a game of tactical organization in the defensive phase. Both head coaches, Gary Smith (Nashville) and Frank de Boer (Atlanta) organized their teams incredibly well, but in completely different ways.

Nashville kicked off not only the MLS 2020 campaign but also the club’s history, in a 4-4-2 formation with very distinct defensive lines throughout the game which is reminiscent of Diego Simeone’s Atletico Madrid. Atlanta, on the other hand, were organized in a flexible 3-4-2-1 formation. The fluidity of the system allowed for either of the attacking midfielders to join the front line with Josef Martínez, creating either a front two or a front three. The wide players, Brooks Lennon and Jake Mulraney were also fluid in that they could easily drop in to help create a back five, or, join the attack. As such, the former Ajax manager’s team shape could, at times, have looked like a 5-4-1, a 3-5-2, or even a 3-4-3 which was impressive to observe.

A thread that ran throughout the entire match for Nashville was for them to get organised quickly when out of possession. The theory, we can assume, was to prevent Martínez from having time and space behind the backline which might also explain the deep defensive line that the home side utilised throughout the match. The following two images show Nashville’s deep backline which limited the amount of space in behind for Atlanta to attack.

In both images, Nashville prevent forward progression of the ball. As Atlanta played the ball backwards in order to secure possession, the backline of Nashville did not alter when traditional defending may have seen teams look to push the defensive line up. This tactic was clearly to prevent any early balls in-behind as the Nashville backline was moving forwards.

Looking at players’ tendencies, Nashville’s left-sided midfielder, Randall Leal, had a slightly different way of defending than that of David Accam on the right-hand side. Leal had a tendency to read Atlanta’s switch of play across their backline and would anticipate passes into Franco Escobar. This would allow Leal the opportunity to release from the midfield block and apply early pressure. The knock-on effect here is that Nashville’s left-back, Daniel Lovitz, would have to be more aggressive in his positioning related to his immediate opponent on Atlanta’s right side.

The image below shows this exact point in action. However, on this occasion, Leal’s eagerness to win back possession resulted in him being beaten by Escobar which happened before Nashville were defensively set. The knock-on effect here was that all Nashville players began to shift more quickly to close the space that Escobar was now able to attack. As such, Nashville were beaten with a quick combination and switch to the opposite side and Atlanta ultimately went a goal ahead.

The below image shows how Nashville defended against switches of play. The midfield and front units stayed incredibly narrow and prevented vertical passes that could break their defensive lines. The backline, however, played slightly differently. Full-backs would often release and pressure the Atlanta wide players, while the centre-backs would stay more narrow and protect the centre of the pitch.

As a result of this organised, narrow defending, Atlanta spent much of the game rotating the ball across the backline and into the wide players before going back the other way. They essentially created a U-shape with their rotation of the ball.

The below image shows Atlanta’s ball rotation across the backline in action. Nashville stay narrow and release their full-backs to pressure the ball when it’s played wide. Also, notice how narrow Nashville’s wingers are when their team is out of possession. Their central positioning allowed Nashville to prevent passes through their lines and also helped to counter Atlanta’s ‘box’ in the middle of the pitch.

It’s not a surprise when looking at the stats to see that Atlanta reduced Nashville to 0.11 xG in central areas. Between the goalkeeper, three centre-backs, two holding midfielders, and two attacking midfielders, Atlanta simply locked down the middle of the pitch when out of possession.

As mentioned in the team lineups, Atlanta played with a 3-4-2-1 formation but had the flexibility to adjust in wide areas, as well as at the front line. As the following images illustrate Atlanta’s defensive organisation, the positioning of Atlanta’s wing-backs (Mulraney and Lennon) can be often seen as being part of the backline.

Again, Atlanta’s tactics to deny central areas makes it almost impossible for Nashville to find a way through. The beauty of this centrally compact shape is that it constantly offers the wide areas for opponents to attack which also encourages crosses. With at least three central defenders inside the box and a competent Brad Guzan, Atlanta will continue to be difficult to break down this season if teams main attacking source is in the form of crosses in the box.

To further support Atlanta’s solid defensive performance, the basic stats of the game would show 13 shots for Nashville, to Atlanta’s 6. However, when looking at the location of where shots were taken from and the xG value of each shot, a different story can be told. The below image shows 11 of Nashville’s shots taken as having an xG of 0.06 or less and shot location indicated that nine of Nashville’s 13 shots total were from outside of the box.

While Atlanta were incredibly well organised in the match and difficult to break down, player tendencies again becomes a discussion point in this tactical analysis. Escobar played as a right centre-back in Atlanta’s back three. While his aggressive nature to step out of the backline and break up play helps him to keep his place in the side, it can also be seen as an area opposition teams can exploit.

The following two images show a very similar tactical situation in the game in which Escobar has stepped out and become disconnected from the Atlanta backline. While it can be debated his positioning is helpful in dealing with the threat of Hany Mukhtar dropping off the front, Escobar does leave space behind.

For teams that play with inverted wingers who like to move in off the line or teams with a pacey forward, Escobar’s tendency to step out could be used as a tactic against Atlanta.

Breaking Down an Organized Defense

During this analysis, it was clear to see that playing through Nashville was incredibly difficult in the game due to their narrow, compact defending. However, the risk associated with playing through the eye of a needle may have been the key to creating more chances in the game.

The image below shows Atlanta playing through the first line of confrontation which was rarely seen with the receiving player facing forwards. Notice the positioning of the next attacking line for Atlanta as players position themselves on or behind the next line of pressure. This positioning created a difficult situation for Nashville to defend but again was rarely seen in the game.

In this next image, Atlanta attack with players positioned between the lines of Nashville’s defence and have successfully managed to stretch their midfield line which creates opportunities to play through. Overall, this was something that Atlanta struggled to do often enough in the game in order to ask difficult questions of the home sides defensive strategy. The best opportunities that Atlanta had to stretch the midfield line came when quick switches of play took place. 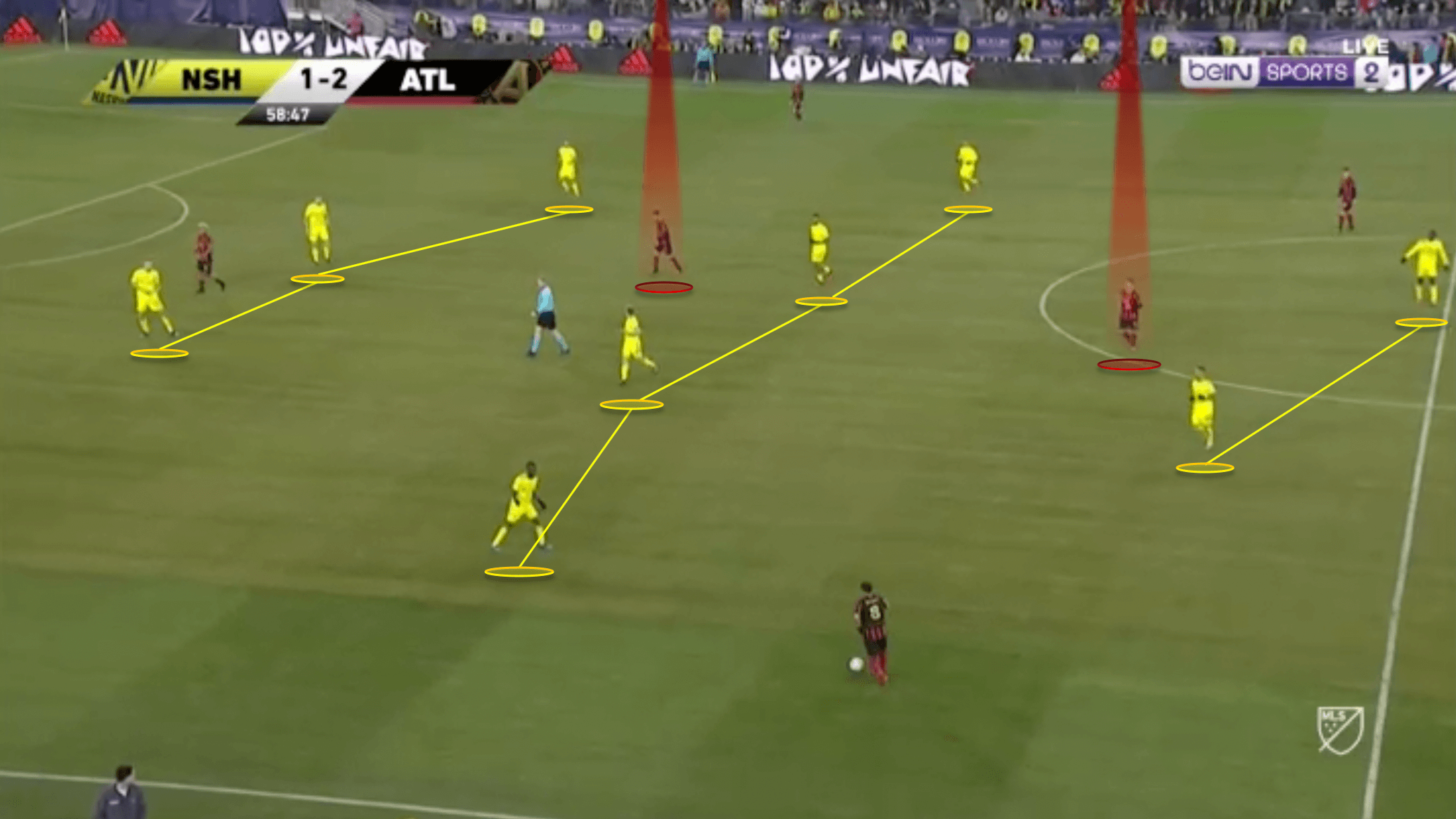 The game wasn’t an MLS thriller that fans would have hoped for in the end. Both teams, however, will certainly take positives from the match, since they reduced one another to low-quality chances at goal and showed solid defensive performances. For Atlanta, losing Josef Martínez to a torn ACL will have been by far the biggest blow of the day. As Atlanta look to compete for another MLS cup, it’ll be back to the drawing board to figure out potential solutions for what will likely be the remainder of the 2020 MLS season. As for Nashville, a narrow loss to one of the leagues’ biggest clubs will give them the confidence to build off in the coming weeks.

31-year-old coach educator with a love for analysis. Originally from the U.K (Newcastle) but reside in the USA (NJ). Enjoys watching strong philosophies in the game and a big believer in team culture.