As the Champions League returned to decide the final eight teams before the big show in Lisbon, possibly the most intriguing tie to still be decided was Barcelona and Napoli. Set up nicely after a 1-1 draw in the first leg, Barcelona are threatened by the potential of their first trophyless season since 2013 should they fail to reach the summit in Lisbon. On the other side, Napoli have been resurgent under the leadership of Gennaro Gattuso. The Serie A side have been in fantastic form and would have been quietly optimistic heading into this match.

This tactical analysis will break down both sides and their approach to this match. While Barcelona were nowhere near their best, their tactics went a long way in nullifying Napoli’s attacking threat and were aided by moments of individual brilliance from Lionel Messi.

With Sergio Busquets out suspended, the biggest question entering this match was how Quique Setién would line his midfield up. At the base of it, Ivan Rakitić was given the nod, with Sergi Roberto and Frenkie De Jong deployed on either side of the Croatian. In defence, Jordi Alba and Nelson Semedo were given the task of providing the width for the side from full-back, which we will discuss further in the analysis. Gerard Piqué was partnered by Clement Lenglet at the heart of the defence. Up front, Luis Suárez led the line with Messi and Antoine Griezmann on either side of him.

For the visiting side, Gattuso set his side out in a 4-3-3 that we would see changes in structure at different points in the match. Kalidou Koulibably returned to the side after missing the first leg to partner Konstantinos Manolas. Màrio Rui and Giovanni Di Lorenzo played the full-back roles, who would be the focal point of Barcelona’s defensive tactics. Fabián and Piotr Zieliński played on either side of Diego Demme in midfield, with the attacking trident of Lorenzo Insigne, Dries Mertens, and José Callejón up front.

When out of possession, Barcelona looked to remain narrow and compact. Griezmann dropped into a central position ahead of the three central midfielders, while Messi stepped up in line with Suárez to create a 4-3-1-2 while defending. The central midfielders sat directly in front of the back four, making it difficult for Napoli to find any space in the danger areas. Simultaneously, the front three maintained their positions, not looking to press too aggressively while Napoli began their attacking phase. 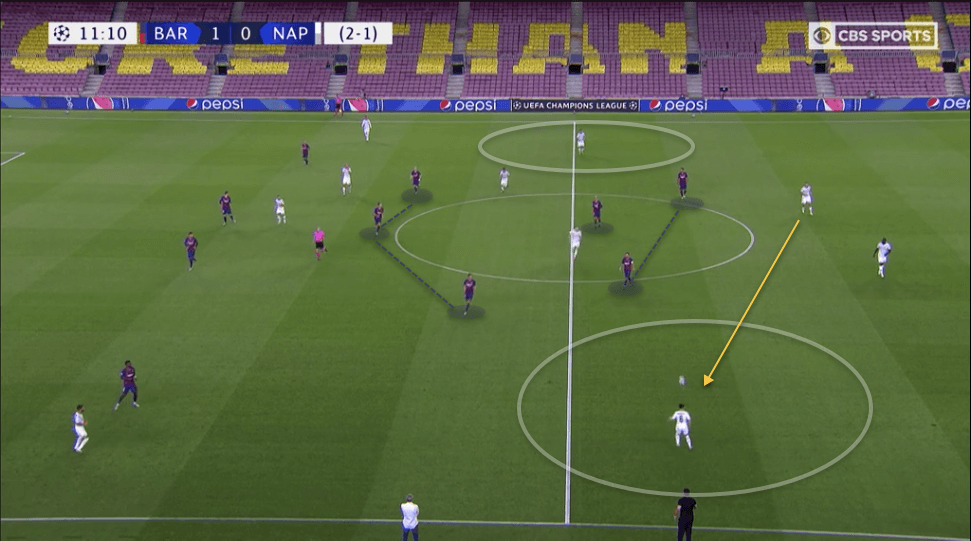 Using this structure, Barcelona’s plan was to encourage Napoli to play through the full-backs, as you can see above. Once possession reached these players, the home side’s pressing game kicked in. Griezmann, along with the ball-near central midfielder and striker moved out to lock the full-back in this area. The purpose of this was to restrict any passing options in a non-dangerous area and force the player in possession to make a bad pass or look to clear his lines. Rui holds possession at the halfway line but is completely out of forward options due to Barcelona’s press focused on blocking off these lanes. 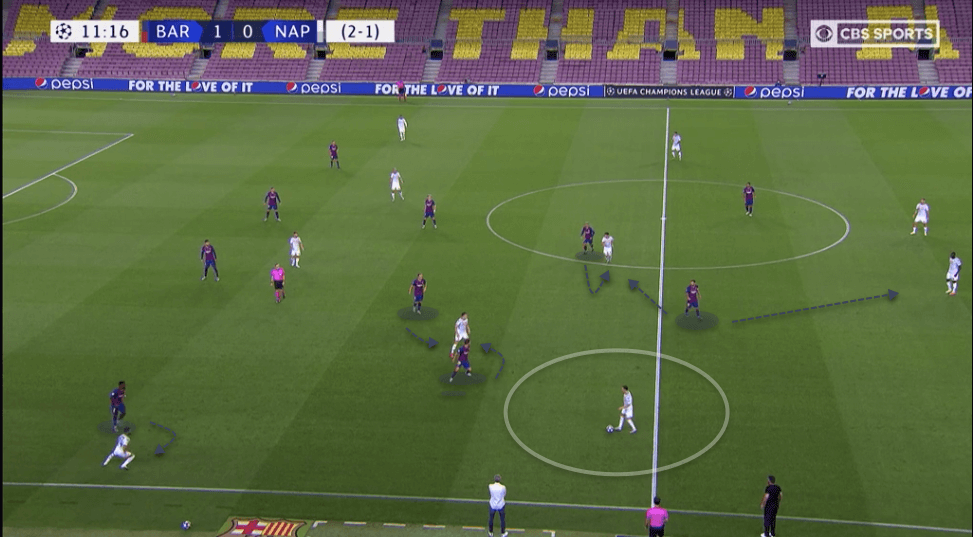 On the left side, de Jong was also given the freedom to progress the side from their defensive phase into attack. The more defensive-minded Sergi Roberto on the right side gave balance to the team in these situations. The Dutch international strives in identifying space to move into himself on the dribble with the objective to open space for teammates around him. When Barcelona held possession in their own half after winning it back from Napoli, de Jong was often used as the outlet because of these abilities. Possession would be worked on the right side to draw in Napoli’s press before a ball over the top would be played into Griezmann or Suárez who would drop off into the area between the midfield and defensive lines to receive and lay off into space for de Jong to move forward. 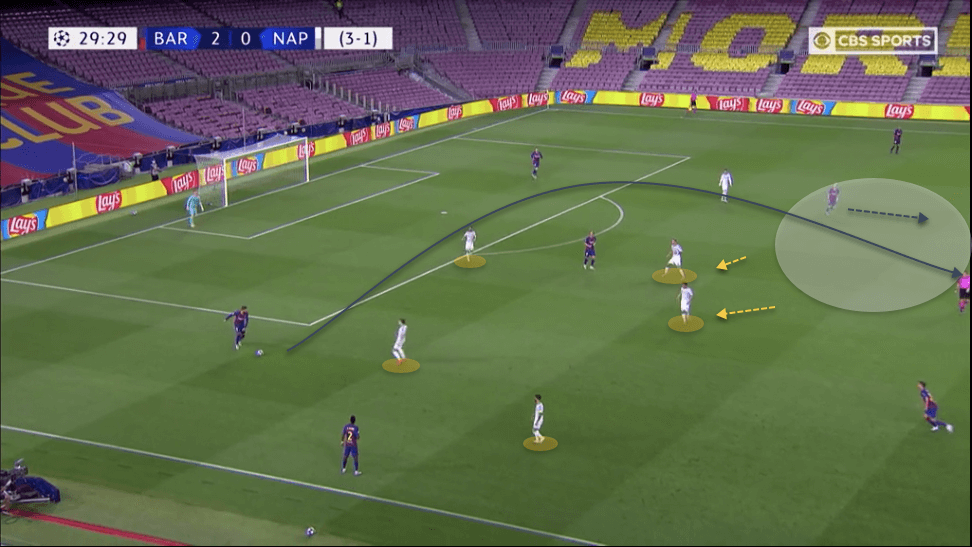 This tactic was seen multiple times throughout the match, and Barcelona were unlucky not to capitalise using it on one occasion. In the image above you can see the home side in possession deep in their third. The passing in this area drew out Napoli’s attacking and midfield lines to gravitate towards the ball. When they were close enough, Piqué played a ball over the top of the press into the path of Suárez. The Uruguayan attacker flicked the ball into the path of de Jong who was left unmarked as Napoli looked to pin Barcelona into the back right corner. 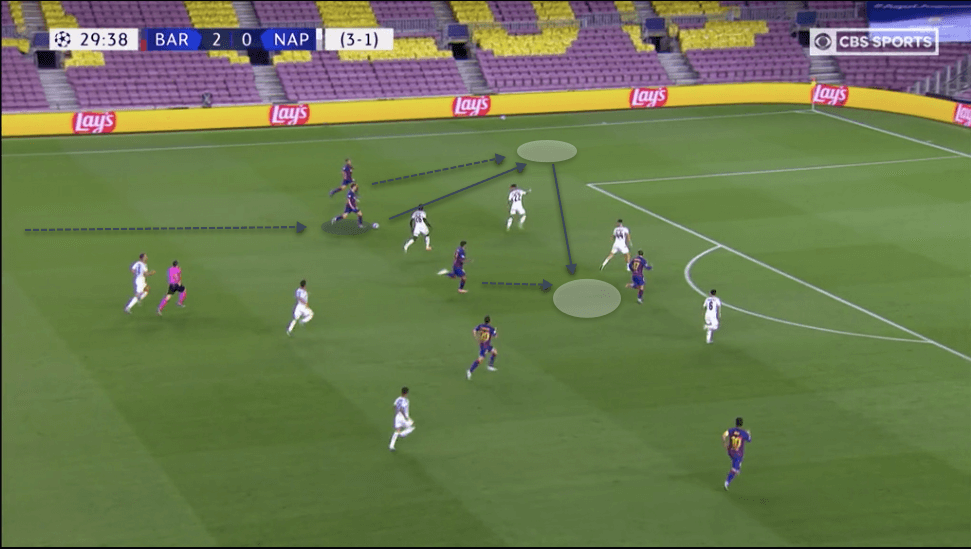 De Jong carried the ball from his half to the edge of the Napoli penalty area. His run forced the Napoli defence to maintain their positioning according to his movement as he made a diagonal run directed towards the centre of the pitch. This gave the likes of Alba out wide and Suárez in the middle the opportunity to position themselves in space. Once Alba was in line with the Napoli defence, de Jong released him for a one-touch cross into Suárez, whose shot was saved by Ospina. The rebound was crossed into the box by de Jong himself, and Messi was in position to put the ball into the net, only to be disallowed due to his chest control glancing off of his arm.

Gattuso’s side set out to play compact in their defensive phase and move forward more expansively when possession was won. Barcelona allowed them to hold possession for a large portion of this game, especially once they broke the deadlock early on before adding to it not too long afterwards. So far this campaign, Barcelona have averaged a passes-per-defensive-action (PPDA) of 8.71. In this match, their PPDA was at a much higher 22.47, showing how willing they were to allow Napoli to hold possession.

Defensively, Napoli looked to restrict the centre of the pitch where Barcelona often look to create with the inverted positions of Messi and Griezmann as they move into the half-spaces. The wingers sat deep and created a 4-5-1 when the Naples side were in their defensive half. In support of Mertens up front, when the ball was played to the Barcelona centre-back or central midfielder on the opposite side of the Belgian, the ball-near central midfield would press forward to carry out the press, forming a now 4-4-2 structure for the visitors. When possession was recycled, this player would revert back into midfield to allow for another teammate to press forward support.

In the attacking channels, Napoli looked to spread Barcelona’s defensive unit as much as possible. Demme stayed deep in Napoli’s midfield, which allowed Fabián and Zieliński to push forward looking to support the front three. However, Barcelona’s defensive structure allowed for very little room in this area. Instead, Napoli were forced into using the wide areas to find opportunities to attack, mainly through Insigne and Callejón. 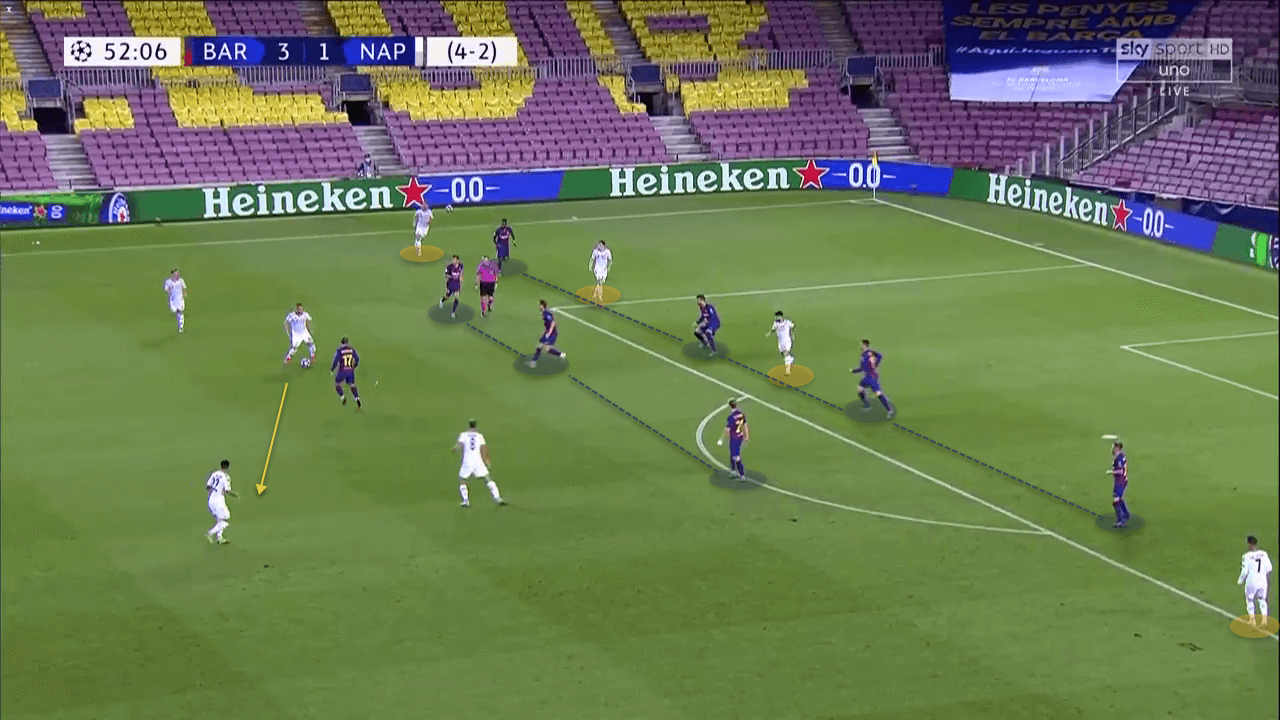 As you can see above, Napoli pressed forward extremely high looking to pin Barcelona back. They attempted to get their central midfielders and Insigne into the half-spaces to look to cause the home side harm. 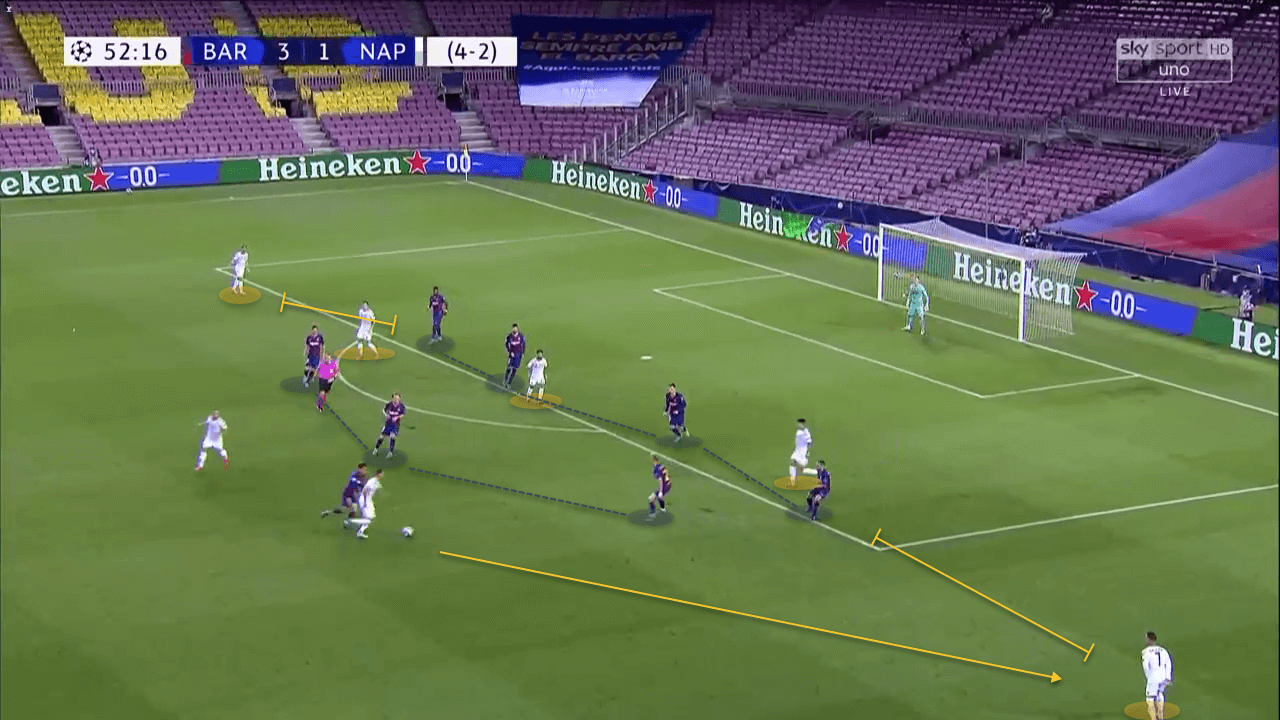 They moved play from side to side through Demme and the second holding midfielder, as Barcelona sat deep and soaked in the pressure. Napoli failed in creating ways to open up this defensive block, as the home wide sat very compact with their defence and midfield lines. As you can see, the only options Barcelona allowed were the wide players, as they were much more comfortable in giving Napoli crossing opportunities rather than allowing them space inside for the creative likes of Insigne and Fabián to have room to manoeuvre on the ball in these areas.

The main point of Barcelona’s attacking tactics under Setién has been the emphasis on the full-backs to provide the width for the side. Once again, this tactic was very evident from the off against the Italian side. When in possession, Alba and Semedo pressed out high up on both touchlines. To cover for this, the midfield three sat deeper in front of the two centre-halves. They would sit just behind Napoli’s first line of press, with de Jong and Sergi Roberto occupying the half-spaces in areas where Gattuso’s men were forced to step out of their lines to mark.

The intent of this positioning and midfield orientation was to draw out Napoli’s midfielders. De Jong and Sergi Roberto dropped into these half-space positions to provide a link to the centre-backs with the full-backs vacating this area. These movements pulled out Ruiz and Zieliński from their midfield line. Once this successful in opening space in the centre, Barcelona looked to find the exposed Demme by finding Messi and Griezmann in a 2 v 1 with the holding midfielder. 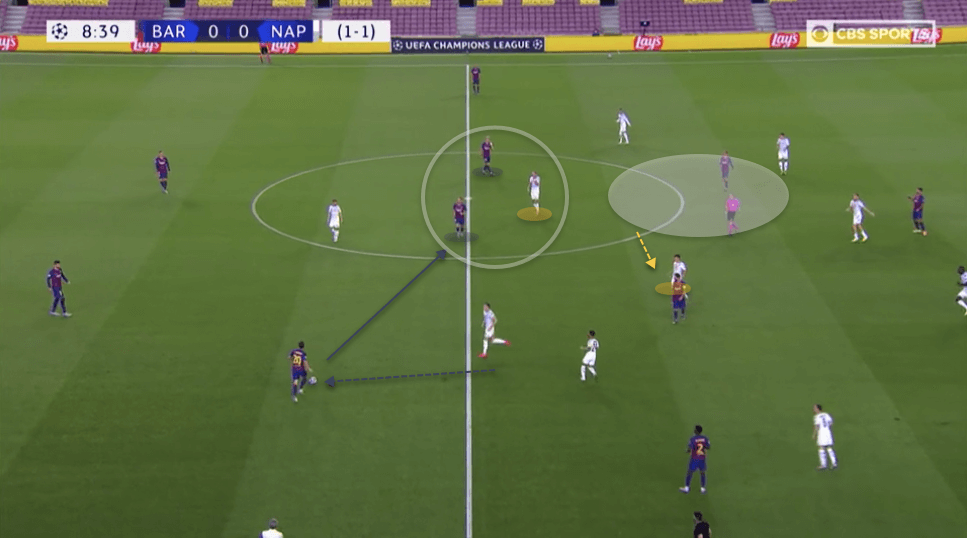 In the image above Sergi Roberto has dropped into the full-back space left by Semedo to receive possession. Reacting to this, Fabián pushed out of his defensive line to press the player in possession and form Napoli’s 4-4-2 defensive shape as we discussed prior. However, the fault comes in the positioning and movement of the players in behind him.

Demme is closely marking Messi. However, due to the ball positioning and team structure, his presence in this position is not where he is needed the most. Napoli already have three players defending in this area, with Rui marking Semedo out wide and Insigne and Fabian blocking off this passing lane into Messi. 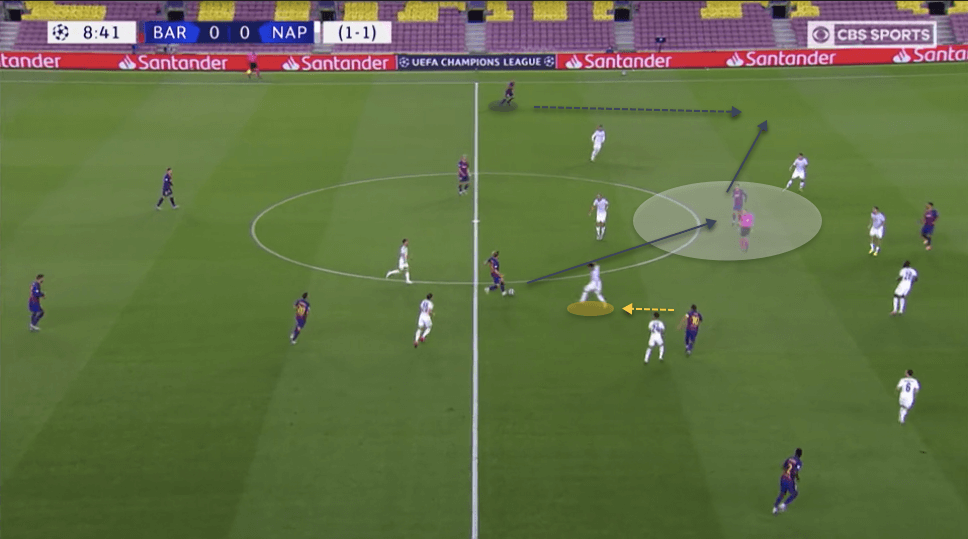 Because Demme has moved over into this space, it leaves Zieliński with two Barcelona midfielders to mark on his own in Rakitic and de Jong, along with Griezmann being left in acres of space between the lines behind them. Rakitić moves closer to Sergi Roberto as he recognises the numerical superiority Barcelona possess in the middle of the park. Once he receives the pass, Demme tries to recover and make it out to mark the Croatian and force him backwards, but he is too late and the home side are able to progress play into Griezmann. The French attacker continues to switch the play into Alba wide left, whose cross finds Messi only for the shot to be blocked. Barcelona would open the scoring off of the resulting corner.

While this match might leave many Barcelona fans with plenty to desire, there are a couple of positives to take away as they move onto the last eight and an encounter against Bayern Munich as we have shown in this analysis. For large portions of this match, the Catalonian club played a safe and conservative match. Principles of their possession game were evident to be seen, as they moved Napoli out of their shape and found players in advanced areas, but the killer edge from their consistently lacked throughout.

This will need to change if they are to break down what will be a much better team in Bayern next week. The inclusion of Ansu Fati in the front three, a player who brings a burst of pace in the final third and the ability to isolate and beat players 1 v 1, or Ricard Puig, who offers a different style in the midfield, one with much more attacking intent to help link this part of the team with the attack, could give Barcelona the edge as they look to win their first Champions League since 2015.