Tottenham have gone from being the third horse in a two-way title race, to looking anxiously over their shoulder at a resurgent Manchester United. Arsenal, on the other hand, have quietly crept up on their North London rivals as well, with the result that the two teams were separated by only four points at kick-off.

An Arsenal win would have put them within sniffing distance of third place, while Spurs needed the three points to put some distance between themselves and the chasing pack. The stakes were pretty high, and fans and neutrals alike were treated to an entertaining game with mistakes and slip-ups aplenty. 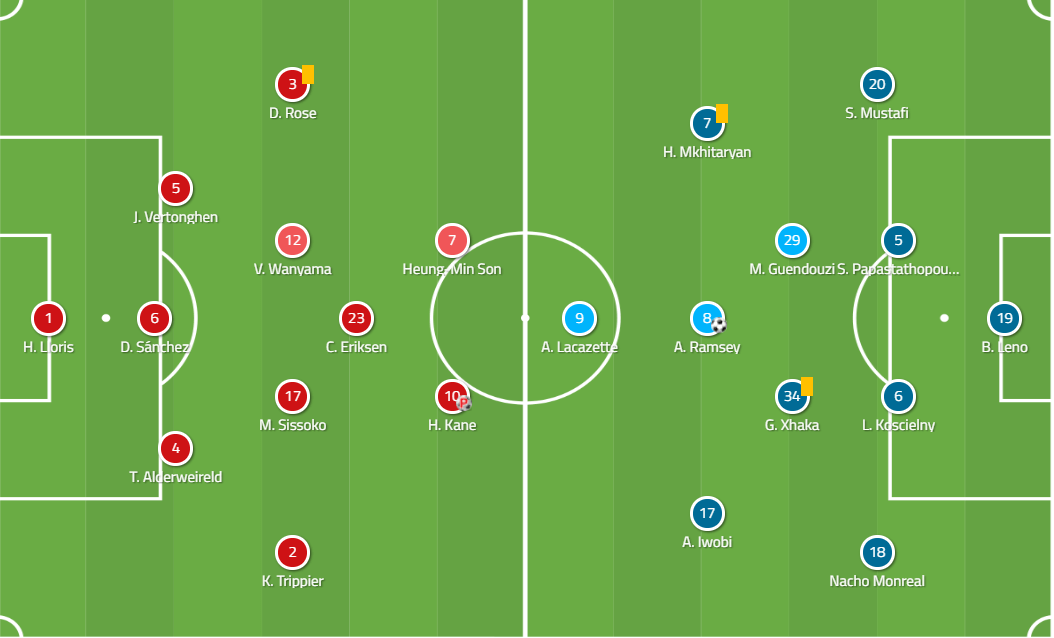 Birthday boy Mauricio Pochettino employed a 3-4-1-2 system. Victor Wanyama made only his second Premier League start of the season; the Kenyan was partnered by Moussa Sissoko in Harry Winks’ absence. Harry Kane and Son Heung-min started up top, with Christian Eriksen playing in the hole behind them.

Unai Emery sprang a number of surprises with his lineup. Sead Kolasinac, Lucas Torreira, Pierre-Emerick Aubameyang and Mesut Ozil were all on the bench. Nacho Monreal played at left-back, with the surprise selection of Shkodran Mustafi at right-back. Henrikh Mkhitaryan came into the side as well, while Aaron Ramsey supported Alexandre Lacazette.

Arsenal started the game on the front foot, looking to press Spurs high up the pitch to force mistakes. However, the Gunners were not very well organised and structured in their press, which resulted in Spurs finding space between the lines and thus easily avoiding Arsenal’s pressure.

A well-implemented high pressing system needs the defensive line to step up as well in order to compress space and stay compact. However, Arsenal’s defenders stood off, even as their midfielders moved up the pitch, creating a considerable gap between them. This was probably due to Son Heung-min’s pace. The South Korean had taken advantage of Arsenal’s high defensive line in their Carabao Cup meeting earlier this season, and Emery probably wanted to deny him space to sprint in behind.

Thus, while the reasons for Arsenal’s deeper defensive line were understandable, they did give Spurs considerable room in midfield. It was ironic, then, that the Gunners opened the scoring due to Spurs’ own high defensive line.

Recent weeks have seen Spurs players make costly individual errors in defence and midfield, and the derby was no different. Arsenal’s goal came from a dreadful mistake by Davinson Sanchez, who completely misread a bouncing ball in Arsenal’s half to give Aaron Ramsey the whole of Spurs’ half to sprint into.

Spurs’ defensive line was abysmal as well, with both Alderweireld and Vertonghen guilty of overcommitting. However, there were basic mistakes made while attacking too, as seen below.

There is very little value from tactical analysis of such incidents; they are individual errors that occur from time to time in football games. However, in Tottenham’s case, this is almost definitely down to fatigue. Spurs players notched up more minutes at the World Cup than those from any other Premier League side. England’s run to the semi-finals was a big contributor to this.

Added to this is their lack of transfer activity, with Lucas Moura the only senior player to have joined the squad since the summer of 2017 having arrived last January. Cup commitments have also increased the squad’s workload, with the result that for all of Pochettino’s tactical acumen, this is a group of players who are running on reserve. They cannot be blamed for mental fatigue setting in and causing mistakes and hesitation.

In Dele Alli’s absence, almost all of Tottenham’s creative burden has fallen on Christian Eriksen. The Dane has had yet another excellent season, but he was below his usual best in the derby. While fatigue was undoubtedly a factor, Unai Emery’s tactics also had a role to play.

After their initial burst of high-intensity pressing, Arsenal adopted a more conservative 4-4-2 shape off the ball, looking to compress space between the lines. Here, the Spaniard has instructed Matteo Guendozi to mark Eriksen, and in the second half, this role was taken over by Lucas Torreira, the Frenchman’s replacement.

As a result, Eriksen’s influence on the game was much lesser than usual, as the touch map shows.

Spurs struggled for creativity as a result. It would not be a surprise to see other teams adopt this tactic as well as a way to shut down one of the most prolific creators in the league.

The Kenyan midfielder has struggled with injuries this season. As previously mentioned, this was only his second start in the league. However, he provided some much-needed protection to Spurs’ back three, especially as he was partnered with Moussa Sissoko, who was always looking to drive forward.

It was after he was substituted for Erik Lamela that his true influence on proceedings was revealed. Where Arsenal had had to contend with his hulking frame earlier, now there was nobody, leaving the Gunners free to attack down the centre.

It was this lack of protection that forced Pochettino into an unorthodox solution – he switched his team’s shape to more of a 4-2-3-1, moving Jan Vertonghen to left-back and asking Danny Rose to play in central midfield. This was of course down to Spurs’ lack of bench strength, but at the same time it demonstrated Wanyama’s value as well as Pochettino’s ability to improvise.

This was an interesting game tactically. Both sides made specific tactical decisions to counter their opponents, and while the two goals came from individual mistakes, both managers can be relatively satisfied with the result. Tottenham’s title hopes are all but extinguished, but they face a battle to keep third place, with Manchester United and Arsenal both breathing down their neck.