Following their progression into the last 16 of the Europa League on Thursday, Arsenal had the opportunity to lift the mood further by sneaking into the Premier League top four. Southampton were the opponents and went into this fixture desperate to drag themselves out of the relegation zone.

With Manchester United drawing their game against Liverpool, and Chelsea on Carabao Cup Final duty, Arsenal managed to move up to fourth with a 2-0 victory. This tactical analysis will focus on the Gunners’ impressive display.

Unai Emery elected to go with a 4-2-3-1 formation, choosing Granit Xhaka and Lucas Torreira at the base of the midfield. Henrikh Mkhitaryan and Alex Iwobi flanked the returning Aaron Ramsey, while Alexandre Lacazette played the lone striker role. Mesut Ozil joined Pierre-Emerick Aubameyang and new signing Denis Suarez on the bench. 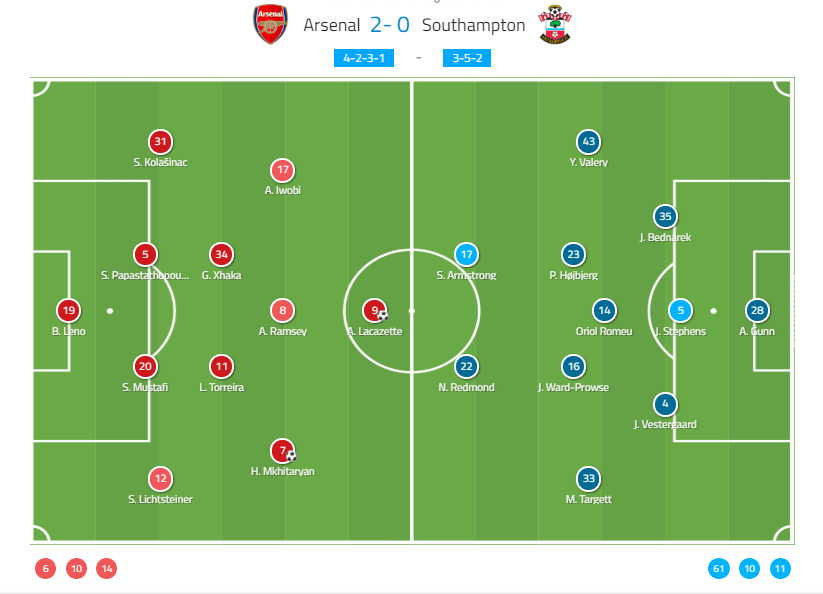 Saints manager Ralph Hasenhuttl set his team up in a 5-3-1-1, preferring to defend deep and hit their hosts on the counter-attack. Redmond played on the last line, supported by Stuart Armstrong, Emile Hojbjerg, and James Ward-Prowse. Yan Valery and Matt Targett were tasked with providing the width.

Arguably the biggest debate surrounding Emery’s start to life at Arsenal has been the frequent exclusion of Mesut Ozil from the starting XI. Despite the German’s obvious talent, he has yet to prove to the new manager that he is willing to work hard off the ball. In Ozil’s absence on Sunday, high pressing and counter-pressing were notable patterns in Arsenal’s performance.

In their established defensive phase, the home team formed a 4-4-2 with Ramsey and Lacazette on the front line pressing Southampton’s defenders. The image below shows one such occasion, with Angus Gunn forced into a long, hopeful pass thanks to the pressure of Arsenal’s attacking duo. 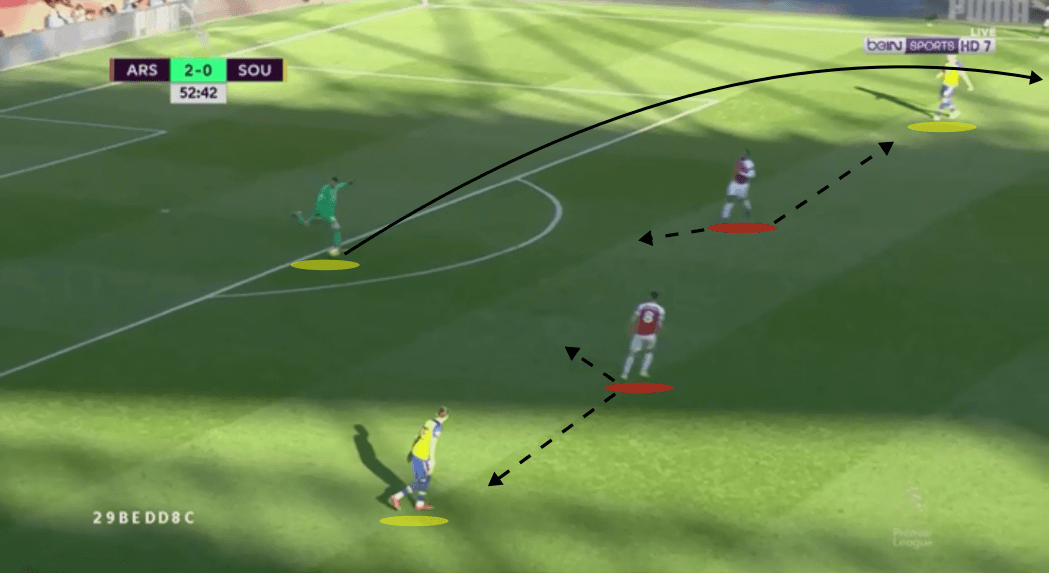 Whenever Southampton did manage to progress into the final third, Arsenal were aggressive with their defending. Ramsey and Iwobi were particularly committed to retrieving possession for their side, supported by the diminutive Torreira. Using the wing-backs, the away side often tried to exploit the wide areas.

However, due to the defensive discipline and energy Arsenal showed in closing out the space on either flank, they struggled to create many clear-cut chances via the wings. The image below shows Arsenal hunting the ball in packs, closing the space around the occupant and forcing a turnover. 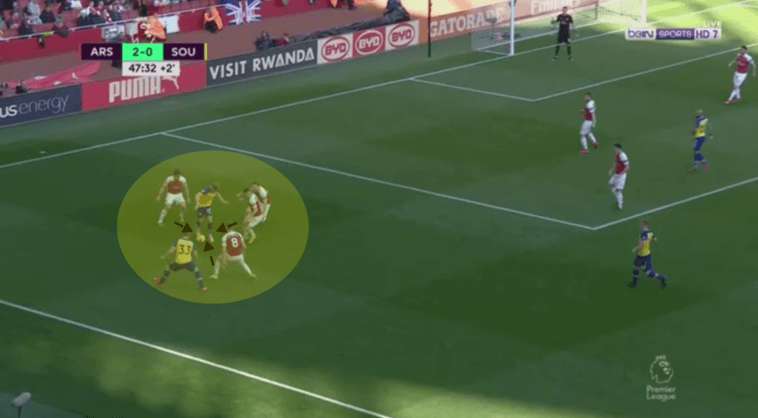 If Southampton attempted to progress through the middle, Lucas Torreira was almost always on hand to leave his deep role to close down his opposing midfielders. The Uruguayan was back to his best on Sunday, winning the ball five times for his side.

His ability to arrive higher up the pitch to press and force turnovers was a regular feature of his performance. The image below highlights this, with the 23-year-old recovering possession for Arsenal before they attack the space and score their first goal of the day. 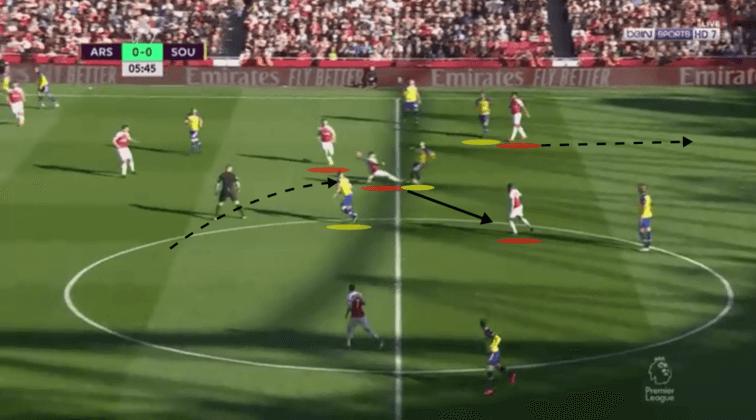 During the transitions between attack and defence, the risk existed that Arsenal would be exposed on the break. This was particularly the case after Southampton switched to a 4-4-2, with substitutes Charlie Austin and Michael Obafemi threatening the space in behind.

Despite Sead Kolasinac’s attacking role, the Gunners managed to cope with these transitions well, with Ramsey and Iwobi offering support on the recovery. This is illustrated below. With Valery breaking down the wing, Ramsey and Iwobi sprint back to prevent him from playing a pass into the channels. The duo team up to regain possession before getting Arsenal back on the front foot. 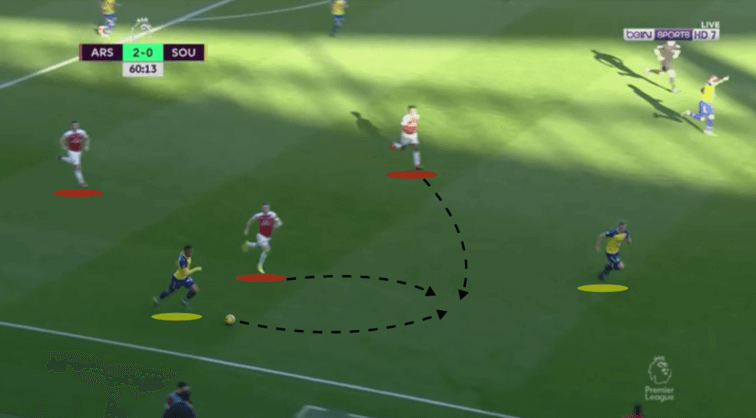 Overall, quality and committed pressing played a significant role in Arsenal’s victory. It’s becoming increasingly clear what Emery wants from his team, and the personnel choices have been a critical component in ensuring the success of the approach. Ramsey is off to Juventus in the summer, but Iwobi, Mkhitaryan, Torreira, and Lacazette have also shown a willingness to work to recover possession.

Attacking down the left

With Southampton electing to play with wing-backs, Arsenal consistently looked to exploit the wings by creating one-on-one and 2v1 overloads. Youngster Yan Valery was a clear target for the Gunners’ attacks, finding himself up against Iwobi and Kolasinac on a regular basis. The central midfielder closest to him, often Hojbjerg, was sometimes slow in getting across to cancel out the numerical disadvantage.

This was particularly true when Arsenal built the play on the right before switching quickly to the opposite flank. The image below shows Emery’s side retaining possession on the right, drawing Southampton’s defensive block across. Granit Xhaka receives the ball at the base of the crowd before looking up to spot Iwobi on the far side.

Hojbjerg is covering the central space, leaving Valery alone on the right. Xhaka plays a long diagonal pass towards Iwobi, and the Nigerian can run at his defender one on one. Ramsey supports this scenario further with a run in behind that prevents Bednarek from supporting his wing-back. 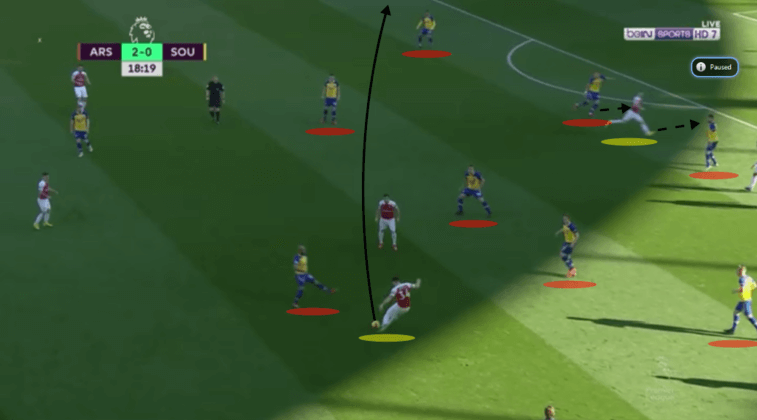 When space existed to break through in central areas, Torreira was often the man to carry the play forward. Occasionally, he progressed into the final third with the ball at his feet, allowing his attacking teammates to support the attack with forward runs beyond the Southampton defence.

Despite playing with five at the back, these kinds of situations sometimes left the visitors in numerically inferior positions out wide. The image below shows an instance where Torreira has carried the attack forward, with Ramsey, Lacazette, and Mkhitaryan charging ahead of him. Arriving late on the left side is Iwobi, who receives in space and plays a cross into the box. 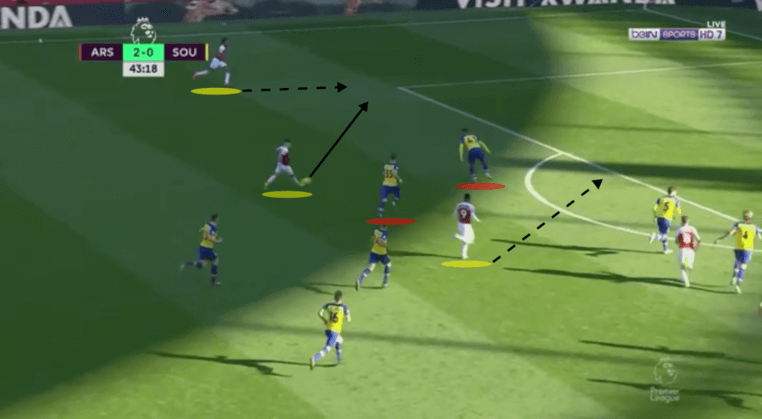 In a further sign that Emery’s methods are beginning to take shape, Arsenal made a lot of quick, vertical progressions on Sunday. Xhaka was again key, orchestrating the build-up throughout the game. The image below provides a good example.

Having created a staggered positional landscape down the left, Ramsey lays Xhaka’s pass off to Kolasinac. The Bosnian international plays it to Lacazette, who lays the ball off to Xhaka once more. Kolasinac continues his run, and is met in behind by another first-time pass from Xhaka. 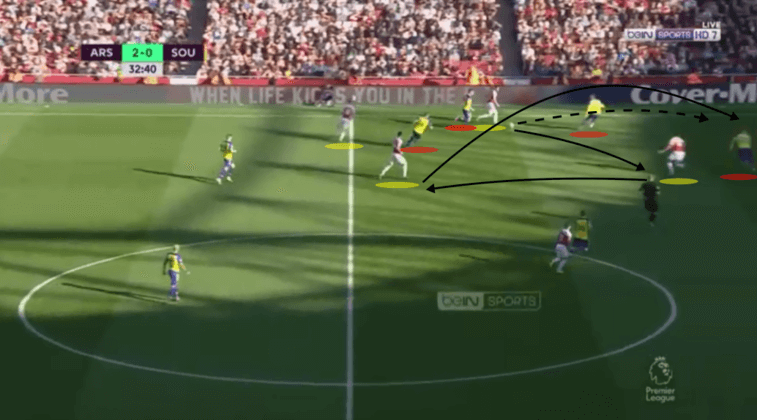 This one and two-touch play was a consistent feature of their game as they looked to play through pressure with quick combinations. The movement towards the ball, first from Ramsey and then Lacazette, helps to create space behind. Kolasinac’s continued forward running takes advantage of the space.

Arsenal’s progressions down the left caused countless problems for Southampton in the first half before their switch to a 4-4-2 helped prevent the issue continuing. The image below shows Arsenal trying to build via the left wing, but Ward-Prowse, Hojbjerg, and Austin manage to close out the space with effective pressing. 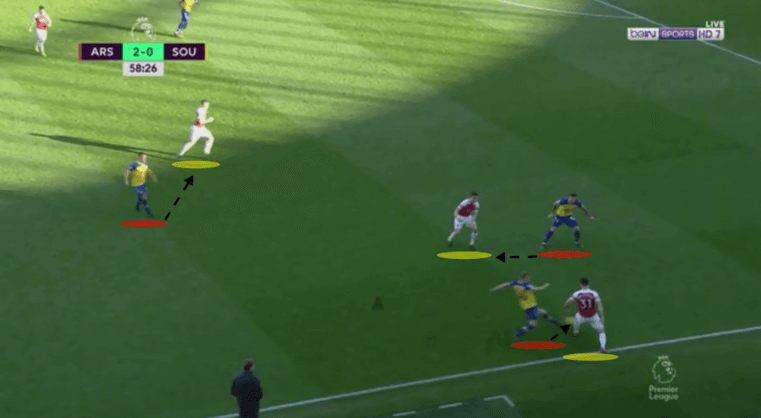 Overall, Arsenal were highly effective in progressing their attacks down the left, as well as occasionally building on the right before switching the play. Emery has received some criticism of late for a perceived over-reliance on left-back Kolasinac for creating chances. However, they varied their play sufficiently against Southampton to avoid becoming predictable. Iwobi was often the main attacking outlet on the left, and the 22-year-old was dangerous throughout.

Given that they have the worst defensive record of the top six, fans of the North London club are never overly confident of keeping a clean sheet, regardless of the opponents. Arsenal had kept just four clean sheets in the league before this tie, but they managed to add to that number against Southampton.

As is normally the case, however, the visitors were handed a few clear openings at the Emirates. Early in the first half, Arsenal’s defence failed to drop off with no immediate pressure on the ball. A simple lofted pass over the top found Nathan Redmond, who’s eventual effort was saved by Bernd Leno. 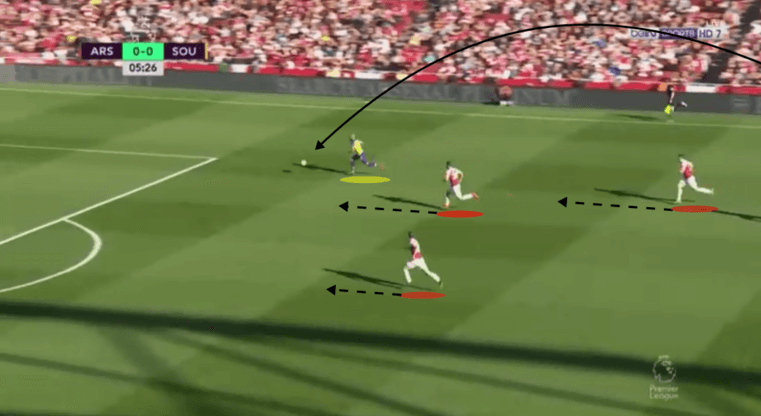 While he offers lots going forward, Sead Kolasinac’s defensive positioning and his struggles to defend one against one continue to provide opponents with attacking opportunities. Although his role on Sunday was slightly less attacking than it has been whenever Arsenal have gone with three at the back, he did find himself exposed on occasions where an opposing attacker was able to run at him with the ball.

The image below is taken from an instance where Kolasinac is beaten easily by Valery, despite support arriving from Torreira. Valery’s cross fails to bypass the first man, however. 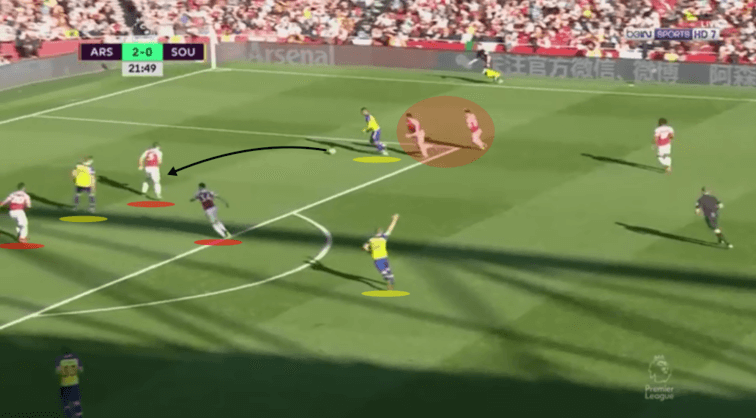 There were a couple more incidents that highlighted Arsenal’s defensive frailties, but Southampton were unable to capitalise on any of them.

The home side were dominant throughout, enjoying 62% of possession, but the game was won in the first half. Both sides registered the same number of shots on target (four), but Arsenal were the more clinical of the two. The respective expected goals tallies illustrate a difference in the quality of chances, with the gunners outperforming their 2.08 xG, and Southampton recording a 0.88 xG.

Amid recent doubts over his philosophy, Emery’s team were able to display many of the positive features of his system. Quick, vertical attacks, and the creation of one-on-one and 2v1 overloads out wide were combined with aggressive pressing out of possession.

The win moves Arsenal into fourth place in their push for a Champions League spot. Southampton, meanwhile, remain in the relegation places with Hasenhuttl’s revival encountering roadblocks in recent weeks.