Aaron Ramsey: What do Juventus see in him?

With the winter transfer window coming to an end there is a lot of speculation surrounding Aaron Ramsey’s future. Is he going to stay at Arsenal till the end of the season or they are going to reach an agreement with Juventus? Or are PSG going to join the battle for his signature?

A lot of questions have been raised about whether any of these team need him in their squad or whether he is about to be the next bench player getting playing time only in cup games. There are debates over whether he is good enough to become part of the European giants, and whether he is worth it.

Juventus look like a perfectly balanced team in no need of a new addition to the squad. On the other hand, PSG are full of huge stars and are totally dominant in Ligue 1.
Why would these clubs want Ramsey, and how he could help improve their performance?

What are the facts?

The Welshman never had the chance to prove his qualities due to big injury blows that affected his whole career on a few occasions. But he has always been known as a huge talent. The talent is still there, but he is already a grown 28-year-old man. He should’ve been playing to his potential by now, but that hasn’t quite happened yet. He wasn’t always first choice under Arsene Wenger, and neither is he under Unai Emery.

Being described as a box-to-box midfielder, he now has scored 61 goals and assisted 64 in 355 appearances for Arsenal. His most valued qualities are his late runs into the box and his creativity. His ball control and key involvements are the reason for him to receive interest from so many clubs. He is a threat when his team counter-attacks, and no matter his position he loves to cut inside.

Why do Juventus want him?

Ramsey is pretty adaptable and could quickly fit into a lot of formations. He reaches his potential either as a number 10 (for Wales) or as a box-to-box midfielder (for Arsenal).

As it is known Massimiliano Allegri started his Juventus career using a 3-5-2 set-up, switching through different formations such as the 4-2-3-1. With the arrival of former Manchester United forward Cristiano Ronaldo, he has largely opted for a 4-3-3. His team have been doing perfectly fine with all of them. It looks like the Welshman could be used in a number 10 role if Allegri decides to switch to 4-2-3-1, which would be more suitable for Ramsey.

This season the Old Lady’s manager has reached the perfect squad balance. He not only has a strongly connected starting XI, but he could also rotate players and be every bit as successful. That means that Ramsey has to find his own place in this squad and overtake one of these successful players. Having to compete with players like Pjanic, Matuidi, Costa, Cuadrado, Bentancur and others for a starting spot doesn’t offer him many chances, especially with the 4-3-3 scheme.

Let’s break down the possibilities for the Arsenal player. When it comes to pass completion he looks like a reasonable replacement of Sami Khedira. Allegri has dropped the German lately and it seems like this might be his last season in Turin. Before he eventually leaves however, Juventus need to make sure that he has a proper replacement. That’s where Ramsey could be of use, especially when it comes to passing abilities. 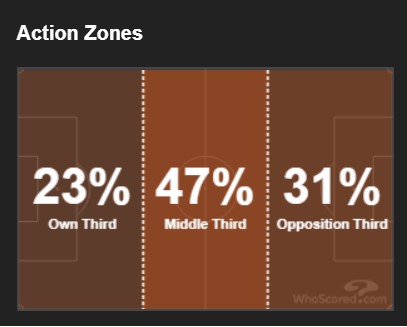 When it comes to pass completion Ramsey makes almost twice as much as Khedira. He has also created more chances (19) than Khedira, who has failed to create any. These created chances have resulted in six assists for the Welshman.

This makes him the perfect addition at Juventus, as the team controls the game in the opposition’s half and keeps high percentages of possession through playing short passes in the central area. As you could see in the picture above 47% of the team’s action zones are in the midfield. Ramsey’s average pass accuracy percentage (86.2%) is going to be of help to Pjanic who averages 87.9% successful passes from 56.62 per game, compared to Khedira’s 47.01 passes.

The Bianconeri are used to playing short passes, which is a part of Ramsey’s style of play too. Over 80% of the team’s passes are short combinations that intend to keep possession the majority of the time. This creates spaces for the front three, but they could also be used by midfielders such as Ramsey, given how he likes making late runs into the box.

The Welshman could be a candidate for Miralem Pjanic’s midfield lynchpin position too. This would be a tall order for him as neither his performance nor mentality could reach Pjanic’s levels, especially when it comes to picking up the ball from the back.

But he could actually be of bigger help to the Bosnian than Emre Can for example. The German’s performances have been poor since his arrival, and he fails to earn a lot of playing time. As I mentioned, the Italian tries rotating players and Can is a part of the midfield rotations alongside Matuidi and Bentancur. 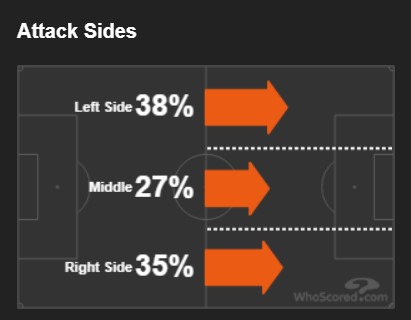 Proof of that hides in the picture above. Thirty-eight percent of Juventus’ attacks happen down the left side where Matuidi is positioned. The lowest percentage (27%) is in the middle, but that is how the new addition could help. He loves to cut inside and he could use his dribbling abilities to either deliver to the front-line or shoot himself. This might increase the number of attacks through the middle. He could exploit the half-spaces and deliver well measured through-balls.

Ramsey’s dribbling could add value to those attacks. Part of Paulo Dybala’s success is exactly those take-on moments although he is forced into more one-on-one offensive duels. Bearing that in mind, the midfielder is averaging 2.24 dribbles per 90 minutes this campaign with a 72.8% success rate, compared to 5.1 with 67.8% success for the Argentinian.

But the most the former Cardiff player could be helpful with are his key interactions. Despite his lack of regular playing time, he has provided six assists for Arsenal this term. None of his midfield teammates-to-be have reached that number. He could be of great support for Dybala, Ronaldo and Mandzukic.

He goes for quite a lot of shots too. On top of that, most of his shots are produced in the box, as are most of Juventus’ (52%). This gives him a little advantage as most of the Serie A champions’ midfielders try shooting from further distance.

Bonus: What about PSG?

When it comes to the French champions he might be of bigger help and earn a starting XI spot. This opportunity comes from eventually letting Adrien Rabiot leave, as the midfielder refuses to discuss a new deal. With him missing out of the squad the position is partly covered by Christopher Nkunku. 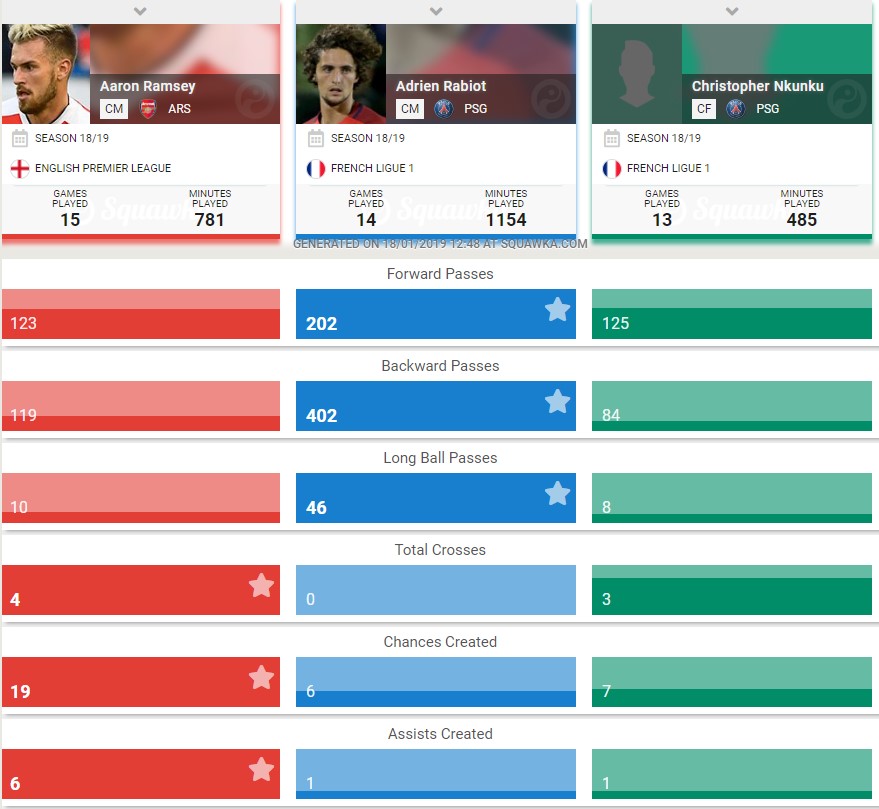 Adrien Rabiot has a lot more playing minutes this term, and he is a great distributor moving the ball up and down the pitch. When it comes to an end product and efficiency, however, Ramsey overtakes him. The Frenchman has created only six chances and one assist. When it comes to Nkunku they have almost the same indexes but Ramsey’s experience and decision-making would be much more helpful in the crucial midfield area.

Aaron Ramsey seems like an unnecessary transfer for Juventus, but an in-depth look shows that he could be quite useful in some areas. He would bring even more unpredictability in the final third and provide support to the frontline in terms of assists and goal-scoring opportunities. He could also be useful in moments of formation switches when in and out of possession, as with his off the ball movement he could exploit the opened spaces efficiently. Would he change Juventus’ style of play drastically? No. He would be a useful option for Allegri’s favourite rotations.