Manchester United came into this weekend’s blockbuster clash against Liverpool on a high, having somewhat recovered their poise by beating Chelsea 2-0 in the FA Cup at Stamford Bridge after the 2-0 home reverse to PSG in the Champions League. Their rivals from down the M62 were a little more circumspect, only managing a goalless draw at home to Bayern Munich in their own Champions League assignment.

Nevertheless, this was an opportunity for Liverpool to lay down a marker; win this game and they would go three points clear of Manchester City, while also denting the confidence of their biggest rivals. United had similar ambitions of securing their top-four spot while damaging Liverpool’s title credentials. All these storylines made Sunday’s game the most anticipated between these two in a long time, and while the game itself was not much of a spectacle, there were compelling narratives to take away from Old Trafford. 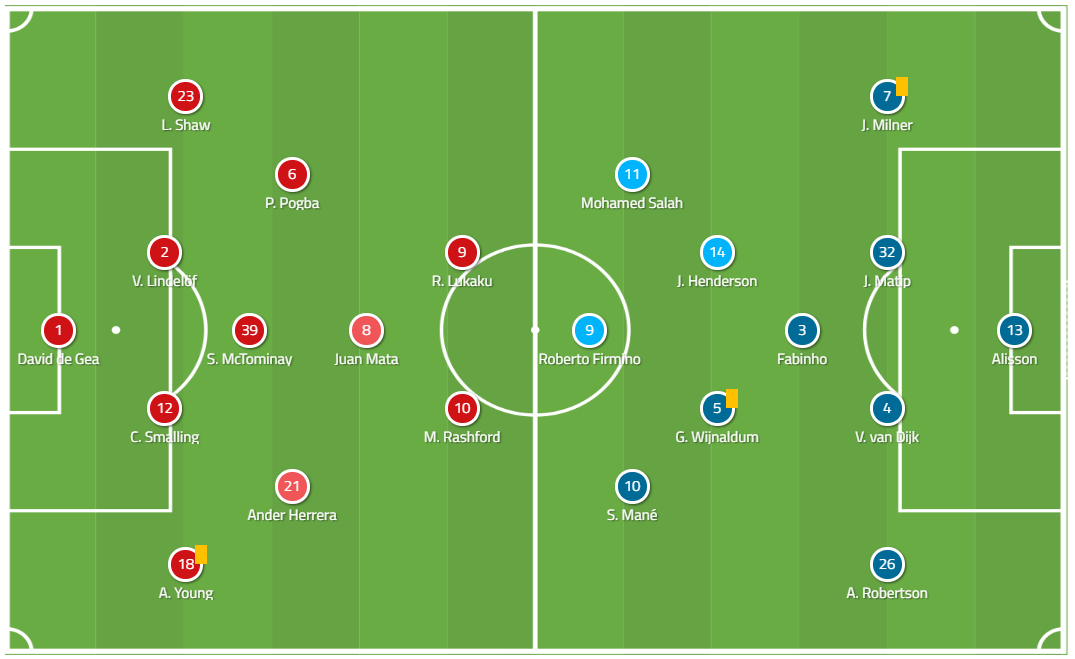 Nemanja Matic had picked up a muscle injury in training during the week, which meant that Scott McTominay deputised for him. Ole Gunnar Solskjaer picked Juan Mata at the tip of United’s midfield diamond, as Jesse Lingard was only fit enough for the bench. Marcus Rashford and Romelu Lukaku started as the two split strikers.

While Solskjaer has lifted the mood of almost everyone at Old Trafford, one beneficiary, in particular, has been Luke Shaw. The 23-year-old has become part of Solskjaer’s first XI, and has backed up his manager’s faith in him with a series of solid displays to finally show signs of fulfilling his potential. Sunday was one of his best games in a United shirt, where, after a tentative start, he was superb, keeping Mohamed Salah quiet and out of the game.

United’s approach to the game played a hand in this as well. Solskjaer employed a low block, looking to counter-attack and happy to cede territory and possession to Liverpool. This was even more evident after the first half when three United players went off with injury. The Red Devils’ cautious approach can be seen from both Shaw and Ashley Young’s touch maps.

Nevertheless, the left-back was immense, tracking Salah’s runs and matching him for pace as well. The Egyptian barely got a sniff around the United penalty area, and when he did, Shaw was on hand to put out the fire. Indeed, he made the most tackles of any United player in the game (three), showing just how important he was to this clean sheet.

Liverpool did try to combat this by moving Salah centrally and putting Daniel Sturridge, himself a substitute for the injured Roberto Firmino, out wide, but to no avail. Shaw’s positioning and awareness were excellent, which eventually led to Jurgen Klopp’s decision to withdraw Salah in the 79th minute. This was the ultimate compliment to Shaw, whose dogged defending had managed to neuter one of the Premier League’s most potent attacking threats.

It seemed as if United would struggle in this game, owing to Nemanja Matic’s absence from the lineup. The Serbian has been rejuvenated under Solskjaer, and alongside Ander Herrera has formed a very effective shield for United’s defence, which has also allowed Paul Pogba to get forward and display his talents.

However, by the end of the game, it was Liverpool’s midfield that was under scrutiny, especially after Herrera had been forced off in the first half itself with a hamstring complaint. Their failure to impose themselves on United was one of the biggest factors behind their inability to threaten David de Gea. The likes of Scott McTominay and Andreas Pereira were impressive, stepping up for United when needed most.

McTominay would have been targeted as the weak link in United’s midfield, but the youngster came through with flying colours. The Scot was calm and unhurried in possession while positioning himself superbly without the ball to both thwart Liverpool attacks as well as provide a passing option for Chris Smalling and Victor Lindelof. His stat sheet from this game demonstrates the quality of his display as the deepest of United’s midfielders: 84% pass accuracy, three aerial duels won, three clearances, two interceptions, two blocks.

Paul Pogba had a much more subdued game than usual. This was down to Liverpool’s tactic of man-marking the Frenchman. Klopp took a leaf out of PSG’s book, who had put Marquinhos on this particular task in their Champions League game at Old Trafford, and tasked Jordan Henderson with marking Pogba.

Nevertheless, the Frenchman was an inspired presence defensively; not something one usually associates with Pogba. This was especially evident during the second half, when United dug in for a point. Pogba was frequently seen scampering down the left touchline, but towards his own goal, tracking James Milner’s bursts forward from right-back.

Alexis Sanchez’s unwillingness to track back consistently was a factor. However, Pogba stepped up and made sure that this did not cost United a point. His touch map (shown below) illustrates the job he did defensively.

The lack of creativity from Liverpool’s midfield was glaring. Fabinho, Henderson and Wijnaldum are a functional, energetic trio, but lack the nous to break down organized defences. This was seen time and time again at Old Trafford, as they struggled to provide quality service to their attackers.

United’s switch to a 4-3-3 from a midfield diamond was also a reason for Liverpool’s impotence. Where the Reds had dominated the flanks in the first half due to the narrowness of United’s formation, now Sanchez and Lukaku were extremely dangerous opponents on the counter-attack, even after accounting for an injured Marcus Rashford. This did force Liverpool’s full-backs to be a bit more circumspect with their positioning, playing further into United’s hands.

This was not the free-flowing, attacking spectacle that most fans were expecting. This can be attributed to the injuries United picked up, forcing them to change their game plan and settle for a point. At the same time, Liverpool failed to take advantage of these disruptions.

The Red Devils remain unbeaten in the league under Solskjaer, but with up to 10 players now unavailable for Wednesday’s game at Crystal Palace, this record will be put to the test. As for Liverpool, it was a point that took them back to the top of the table, but there was a sense that the momentum in the title race has shifted ever so slightly in Manchester City’s favour. Time will tell if this was a point gained or two points lost for both teams.