Real Madrid got back to winning ways on the road as they narrowly saw off Levante in La Liga, though it was in controversial circumstances that they took the three points in Valencia.

The deadlock was broken by Karim Benzema’s penalty against the run of play after Enis Bardhi was judged to have handled the ball inside the box after the referee consulted VAR. Roger Marti equalised for the hosts, sliding in to get on the end of Jose Luis Morales’ cross, but substitute Gareth Bale would decide the 2-1 win, again from the spot, after a controversial penalty was awarded to Casemiro.

Our tactical analysis will use statistics to identify what key points Real Madrid’s Santiago Solari can take from the game. 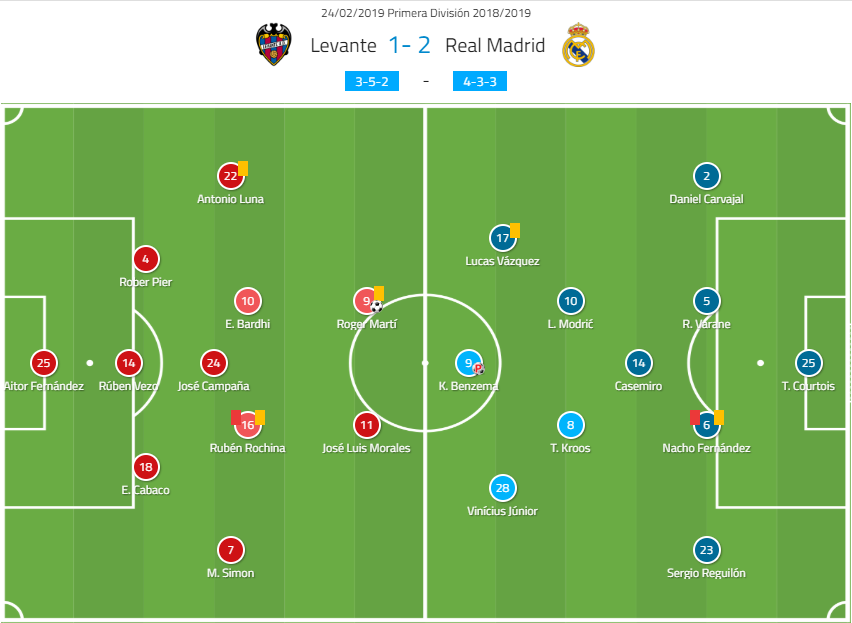 With 0.23 xG more than Real Madrid, excluding penalties, it’s fair to say that Levante can feel hard done by. Roger may have eventually got on the scoresheet but it wasn’t his first chance. Many will feel that he should have done better with his strike just before half-time, firing wide after a great run saw him peel off of Nacho and find himself one-on-one with Thibaut Courtois.

VAR was required to confirm both of Real Madrid’s penalties, with huge controversy over the second as Casemiro made the most of very little contact, and it helped to mask a disappointing display. Only once in the past five games have Real Madrid achieved over 1.5 xG, that time coming in the home defeat to Girona, and it’s clear that Solari’s team are not creating the kind of chances that they should be.

At the other end, again only once in the past five games has the opposition’s xG been below 1.0, that team being Barcelona at the Camp Nou in the Copa del Rey. There are problems at both ends of the pitch at the Estadio Santiago Bernabeu and xG is showing that they can only go on for so long by scraping through results which they may not deserve.

Solari is clear that he will keep the faith in his first choice team selection, again sticking with as many regulars as possible in Valencia, even in spite of the prospect of two Clasicos and a crucial Champions League tie ahead. However, the system appears to have been worked out, with a number of teams beginning to find ways to nullify the likes of Vinicius Junior and Benzema.

Much of that lies in the imbalance in attack. Lucas Vazquez takes up a far more conservative role, compared to the more advanced position occupied by Vinicius. As such, Vazquez not only covers more ground but he does the hard work for the Brazilian. Much like Girona last weekend, Levante spotted the weakness and looked to get forward down their left where Vazquez would drift centrally, and double up on the teenager on the other side.

Few can question Vazquez’s work rate, but what he contributes to the side is up for attack. As Solari refuses to rotate or mix things up, it leads to a very predictable and easily anticipated game plan. Levante are not the first side to figure it out, and it seems unlikely that they will be the last to do so either. The Argentinian must learn to make the most of the likes of Marco Asensio and Bale from the bench.

Better as the underdog

Real Madrid under Solari are at their most clinical when they are under the cosh, being dominated in terms of possession but striking on the counter-attack to secure narrow victories. Again at the Estadio Ciutat de Valencia, Real Madrid’s opening goal came just after a spell in which they were struggling for possession as Levante grew in confidence, despite making almost half as many passes on the night.

It may not be a coincidence either that Levante’s equaliser came as Real Madrid’s possession reached its peak of 74%. Time and time again, Los Blancos’ become overly confident and relaxed in possession and are caught out simply by teams looking to mount basic counter attacks. Girona executed that game plan well and it was clear once again that Levante had done their homework on Real Madrid’s most recent outing.

With ties against the likes of Barcelona and Ajax to come, before potential progress in Europe, Real Madrid cannot afford to be so sloppy in possession. If sides like Levante are finding ways to punish them, then sides of higher quality could wreak havoc. That said, it could give Solari the perfect chance to return to his preferred style of sitting back and waiting for the chance to strike.

Sunday evening also pitted Solari’s men up against against a back three again and resulted in many of the same struggles as against Real Betis and Sevilla earlier this year. With the backline sitting deep and content to close up the spaces for Benzema and Vinicius, both men found themselves running into dead ends and wasting possession with pointless attempts on goal with no movement around them in the box.

Vinicius’ pace was restricted and limited by the deep-lying defence, meaning that he would often break forwards only to then cut the ball back and switch play to the other side. Benzema’s movement has often been the solution, but with so many men in the box he could not find the same spaces to exploit his intelligence in the way that he has in some other recent fixtures.

Again, it comes back to the key point of Solari’s refusal to change. With Asensio and Bale on the field, albeit only briefly, the side looked more dynamic than with Vazquez. By spreading play wider and with threats on both flanks, the Levante defence became more stretched and worn out, leading to opportunities.

As we approach the most critical stage of the season, Real Madrid remain far from their peak and their coach remains adamant that he will not make major changes. After performing so well only a matter of weeks ago, the downward trend of performances is a concern. Despite allowing the visitors to play, Levante could have punished Real Madrid and such a result would have killed off any vague remaining hopes of a title challenge. Next up are league leaders Barcelona, who won’t be anywhere near as forgiving.