In what had the potential to be a fabled European night at Anfield, Liverpool faced off against Bayern Munich in one of the more competitive pairings of the Champions League round of 16. Going into the match, Liverpool manager Jurgen Klopp held a 9-4-16 win-draw-loss record against the Bavarian club. While the match didn’t play out in its cleanest form, the tactics utilized by both managers were evident. This analysis will explain Klopp’s game plan and intent. 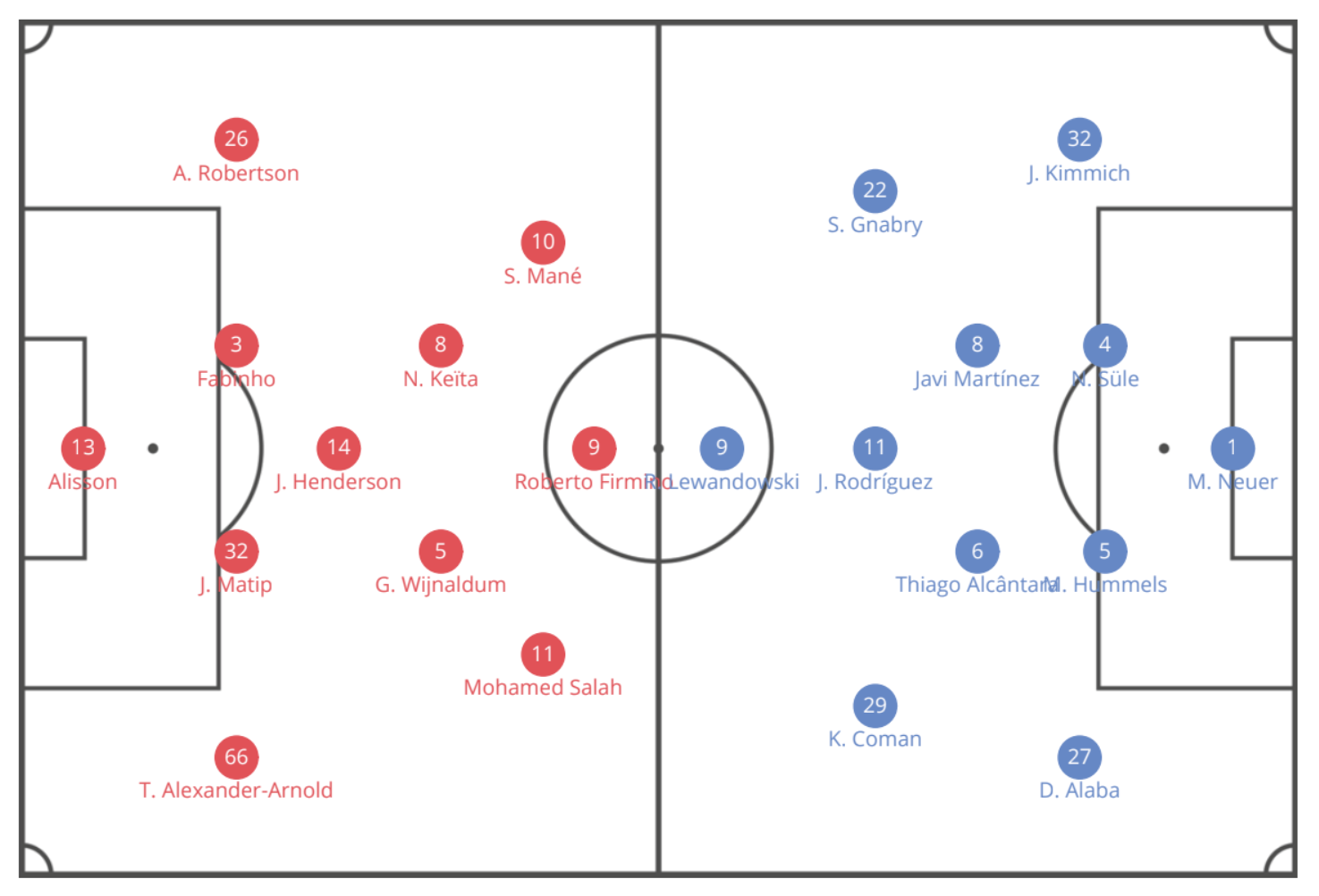 Klopp elected to play a 4-3-3 formation, the primary formation Liverpool have used this season. With both Dejan Lovren and Joe Gomez injured and Virgil van Dijk on a suspension due to group stage yellow card accumulation, Klopp had little choice but to start either Jordan Henderson or Fabinho alongside Joel Matip in central defence.

He decided on Fabinho to take up the role, with Henderson stationed as the deep defensive midfielder in the midfield three. Georginio Wijnaldum and Naby Keita acted as the eights in midfield, rotating attacking responsibility as the other stayed back alongside Henderson. The front three scored a combined six goals in the group stage.

After fending off the initial flurry of attacks from Bayern, Liverpool controlled the attacking side of the ball for most of the first half. Yet, despite attempting 10 shots in the first half alone, including seven of those inside Bayern’s box, Liverpool’s attack came up short in shot execution. The German club’s deep block positioning made hitting the target on most shots difficult, but there were still a few opportunities missed by Liverpool’s front three.

While Salah missed this shot, Sadio Mane, who has been in top form lately scoring a goal in each of the four previous matches, failed to hit the target with three shots this match. The inconsistency of the left winger has been one of the very few causes for concern for Liverpool this season.

Even with the creativity that attacking players like Firmino are known for, Liverpool had trouble finishing attacks.

Kimmich remained disciplined throughout the match, holding his right-back position in the low block and not getting caught following the ball. It is no wonder he is deservedly considered one of the best full-backs in football.

With Bayern Munich playing a deep block, the Reds midfield was allowed space to advance the ball forward, up until the defensive midfielder Javi Martinez, who had a fantastic match including three interceptions. This pushed the ball out towards the wings in Bayern’s half, where Joshua Kimmich did an excellent job at isolating Sadio Mane on the right side.

Andrew Robertson was also stopped consistently on his side going forward. He couldn’t get a connection going with Mane, despite their link having flourished for much of this season.

What you can also see from the above pass map is that the midfield was the bright spot in Liverpool’s performance against Bayern. All three of Wijnaldum, Keita and Henderson had strong performances for a number of reasons.

As stated, Bayern situated themselves in a deep block for a good portion of the match, with occasional pressing, to limit Liverpool’s front three. This gave the three midfielders space to work with going forward.

This doesn’t mean the midfield was only good because Bayern Munich let them however. Both Keita and Wijnaldum consistently carried the ball forward past defenders. The Dutchman completed three of his four dribbles, and the Guinean completed all four of his, hearkening back to his days at RB Leipzig.

Unfortunately, Mane didn’t have his best match. Here he makes an errant back pass, which Bayern winger Serge Gnabry intercepted.

This quality from the midfield prevented Bayern from having many attacks centrally, and pushed the ball wide.

Liverpool might not have scored at home, but a clean sheet against one of the traditionally more dominant teams in Europe isn’t to be taken lightly. Fabinho was, literally, at the centre of this defensive achievement.

Fabinho’s positioning, while slightly more forward than centre-back partner Matip, was consistent throughout the match. He even covered Matip a number of times when Matip engaged in a press.

Centrally, Liverpool’s defence monitored and contained Lewandowski all match. The Polish talisman only had three touches inside the box.

The success of Liverpool’s defence centrally led Kovac and Bayern to attack the wide areas of Liverpool’s defensive third. The Bayern wingers, most notably Gnabry, gave the young Liverpool full-backs, primarily Robertson, problems most of the match with their individual skills on the ball.

Fortunately Liverpool’s defensive structure was disciplined, and prevented Bayern from moving the ball into the centre from the wide areas.

As stated earlier, Robertson also really struggled going forward this match, but Kimmich’s suspension for the second leg due to a yellow card could suddenly make the right side of Bayern’s defence a target.

Much of the second half contained more reserved efforts from Liverpool’s attack, as fatigue around the pitch led to a deeper defensive block.

Klopp: “I’m not over the moon but I’m completely okay with the game.”

Ultimately, a 0-0 scoreline seems to be acceptable for both sides. Liverpool defended well and planned a dynamic attack that failed to complete the end product, while Bayern Munich staved off any potential Liverpool advantage away from home. Klopp was satisfied with the partly makeshift back line and their sufficient performance, especially considering a key cog in that line, Virgil van Dijk, will be available for selection in the second leg. All will be to play for in the second leg at Allianz Arena.