Niko Kovac’s Bayern went to Anfield on Tuesday night as underdogs in the Champions League last-16 clash with Liverpool. After a poor start to the season, Bayern have gathered momentum recently and produced a strong away performance at Anfield. This tactical analysis will look at Kovac’s setup that gave Bayern the balance they needed to keep a clean sheet away from home.

Liverpool are famed for their pressing under Klopp, but it was Kovac’s men who stole the show with the way they pressed Liverpool into multiple mistakes. The basic defensive structure was a 4-4-1-1 with James Rodriguez often joining Robert Lewandowski when pressing to form a 4-4-2.

We can see this setup in the image below. The near-side central midfielder, Thiago in this case, would mark the closest Liverpool midfielder. The other, Javi Martinez in this scene, would provide cover behind his midfield partner. 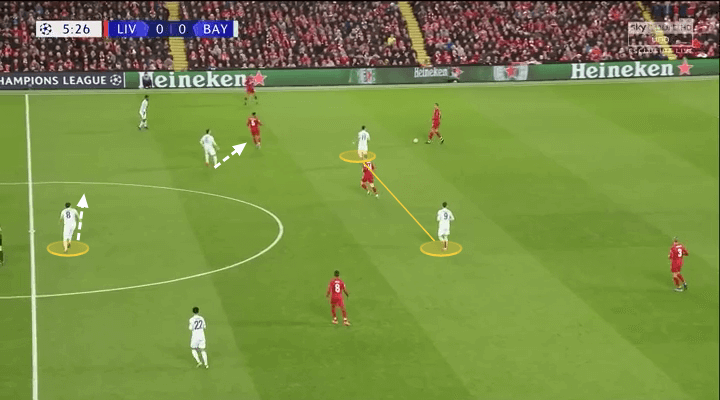 Bayern did really well in denying Liverpool access into central midfield. Here is an example of when Trent Alexander-Arnold makes a mistake by trying to play into the centre. Bayern are really well set up here though and James intercepts the pass and sets Kingsley Coman up for the counter-attack. 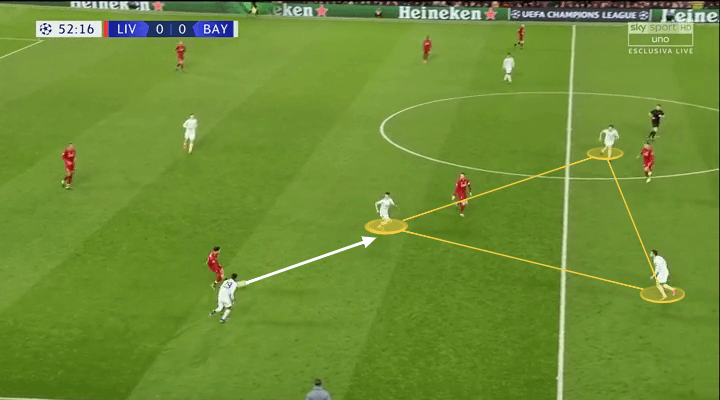 It was clear from the first few minutes that Kovac had targeted the goalkeeper Alisson whenever he had the ball at his feet. The example below highlights Lewandowski putting pressure on the goalkeeper while the other Bayern players remove short passing options. Alisson then tries a risky pass into midfield that Thiago intercepts. 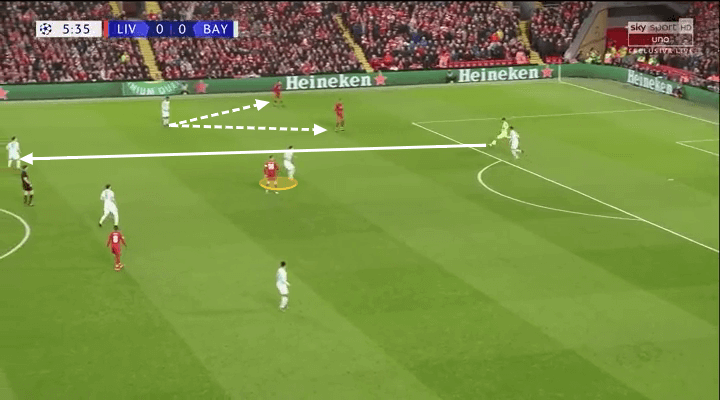 The Brazilian is often lauded for his ability with his feet but he had a nightmare on Tuesday. He was guilty of being careless on multiple occasions and on another day that would have cost Liverpool at least one goal. Here Lewandowski again provides pressure and Alisson tries a nonchalant pass to Matip who receives the ball more or less at his knee and Coman wins it off him. 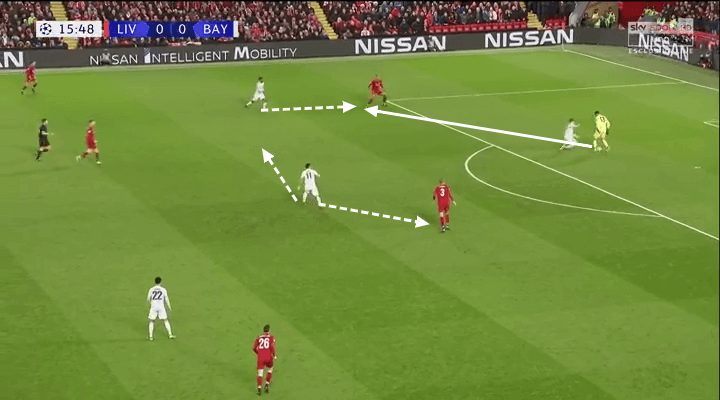 The image below is a third example of how Bayern targeted the goalkeeper. First they block off all of Matip’s passing options so he is forced to play the ball back. James then continues the press and Allison kicks the ball out for a Bayern throw-in. The strategy was really successful in stopping Liverpool from cleanly progressing the ball, but Bayern will rue the fact they didn’t score an away goal from the opportunities the pressing provided. 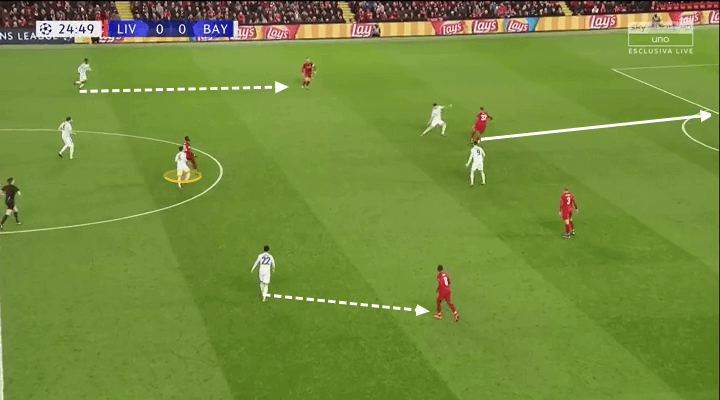 Bayern’s pressing was man-orientated, and the image below highlights why Liverpool struggled to deal with their press. Bayern have moved up and defend 3v3 around the ball. Henderson on the ball has no options to play into midfield and thus Liverpool can’t organise their attack. 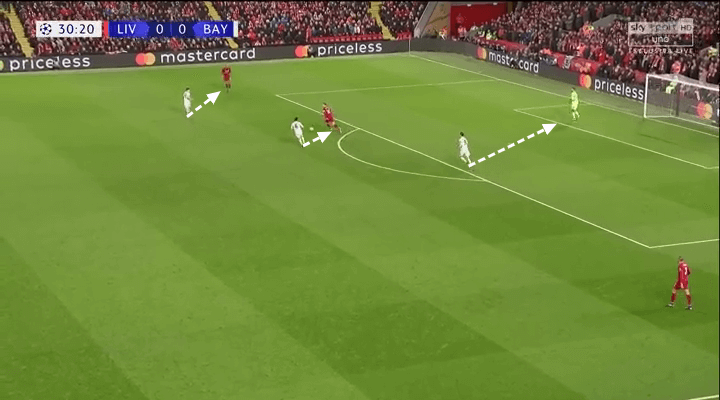 Bayern’s defending in deeper areas was also man-orientated. Below we see Matip stepping out with the ball. Javi Martinez (yellow) has followed the run of Wijnaldum while Thiago is marking Keita. With Firmino dropping off the front, Hummels steps up to mark the Brazilian.

Liverpool should, in theory, have been able to use this approach to their advantage with early balls in behind the situational back-three where the likes of Mané and Salah should have had good chances to create problems for Bayern. 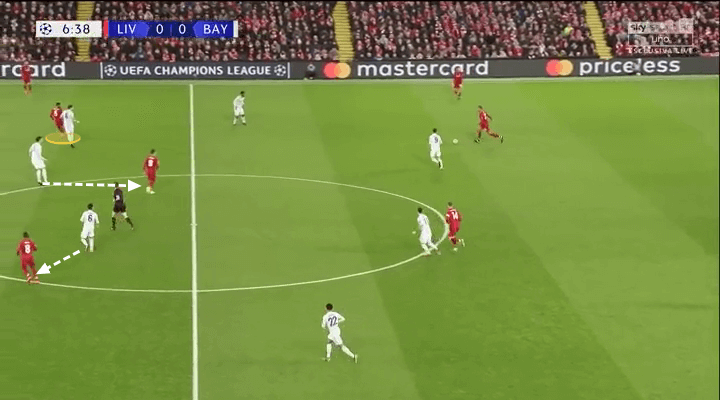 In the image below, Alexander-Arnold has just intercepted a pass and looks to play into Firmino. Alaba and Coman react straight away and sprint backwards and towards the ball. James reads the pass early and sprints to Firmino and wins the ball back for Bayern. 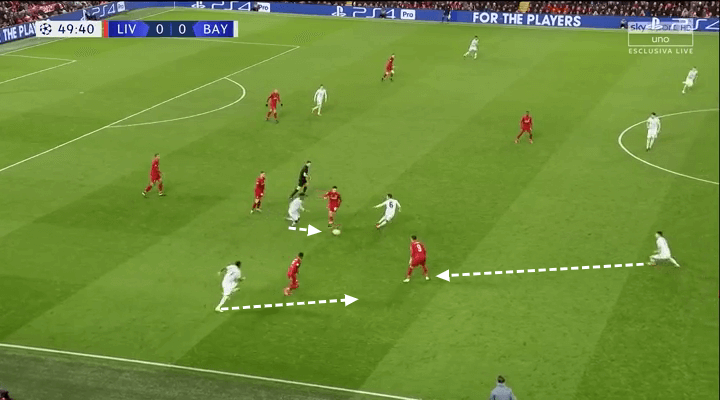 The image below is another example. Liverpool have just won the ball but Wijnaldum is put under pressure straight away and Bayern create a net of five players around the Dutchman. Wijnaldum tries to dribble through the challenges but loses the ball immediately and Bayern counter. 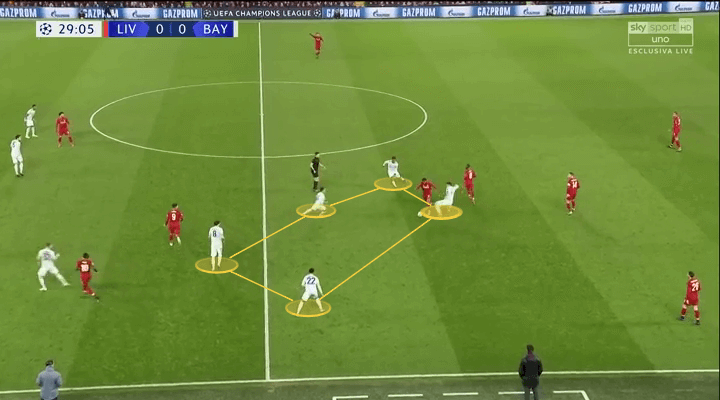 Bayern’s defending was really good and Liverpool only really created chances when Bayern lost the ball in their own half or from coincidental situations where the ball simply bounced their way.

Bayern took a lot of risks in their build-up by always looking to build from the back with the two centre-backs very deep either side of Manuel Neuer. The image below shows their basic structure with the full-backs wide and the two central midfielders looking to receive centrally. 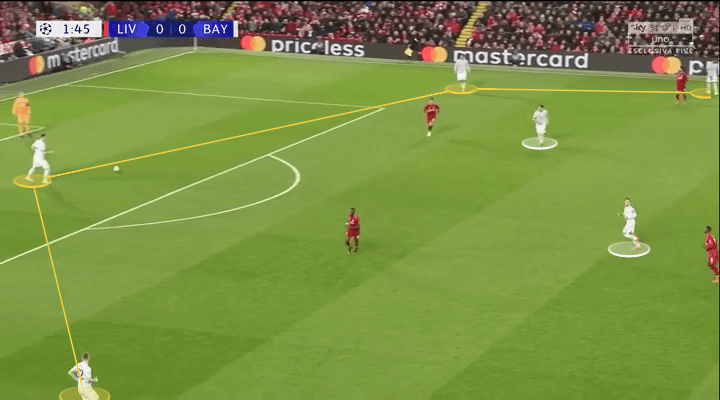 The image below shows Salah (yellow) pressing Hummels from the right wing. This movement obviously left Alaba (white) free and Hummels scooped the ball over the Egyptian and Bayern moved up the left side. 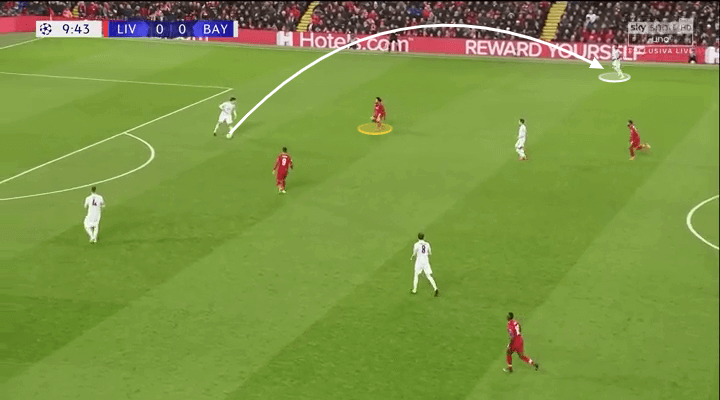 The image below shows another example of this but on the opposite side. Liverpool defend very narrowly with their front six. James exploits the space on the right with a lofted pass to Kimmich, who can then attack Liverpool’s left-back 2v1 with Gnabry. 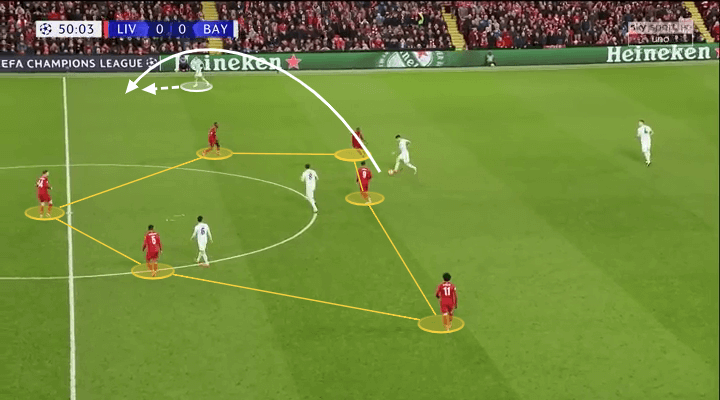 Bayern found a good way to beat Liverpool’s press but they often remained outside Liverpool’s shape. This led to neither side really creating any chances from central combination play. Niko Kovac had clearly identified another area to target though.

With the centre often blocked off, Bayern looked to attack the wide areas. Coman and Gnabry are exceptional one-on-one wingers and they showed this by proving to be menaces to both Alexander-Arnold and Robertson. The image below highlights how Bayern looked to double up in the wide areas with their full-back and winger knowing that Liverpool’s wingers usually defend in narrow positions. 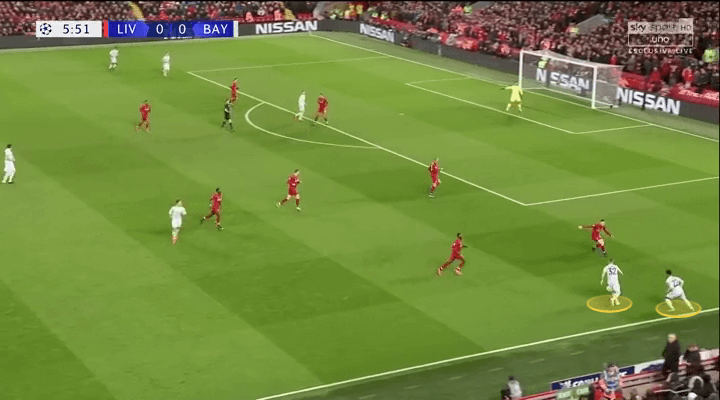 Therefore it became important for Bayern to switch the play quickly in order to give the wingers time and space to attack the full-backs. The below image shows the excellent Thiago spraying a cross-field pass out to Gnabry. 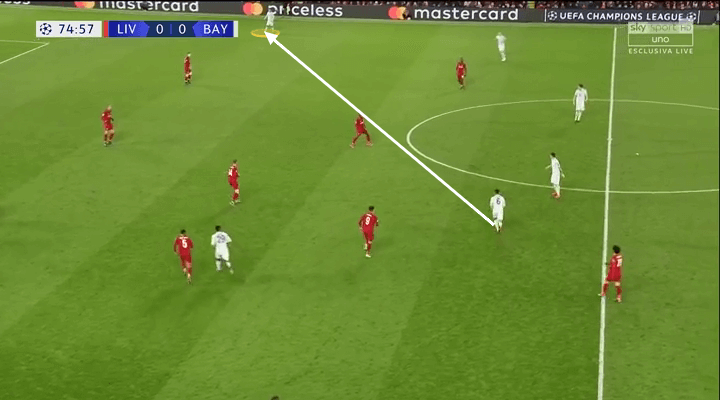 Gnabry in particular was lively in Bayern’s attack. He totally dominated Robertson in their individual battles and also forced the Scot into some mistakes when in possession.

The below image shows the build-up to Bayern’s best chance of the night. Gnabry had just received a cross-field pass on his chest. Robertson had no cover and Gnabry easily skipped past him and fired in a cross that Lewandowski hit straight at Alisson. 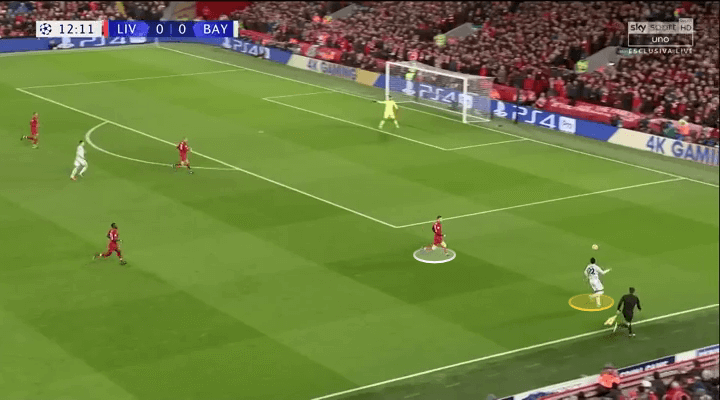 Bayern didn’t score from the wide areas but they created plenty of decent chances that will give them confidence ahead of the return leg.

A goalless draw suits neither team. Bayern will be happy with the clean sheet but will be scared of conceding an away goal in Munich. They know they ‘only’ need to win to go through and have given themselves a good chance of doing that.

Liverpool will also be happy with a clean sheet but must have expected to score at least one at home. Niko Kovac really impressed with his tactics and now it will be interesting to see what happens in the return leg.