The 3rd game week of the 2021-22 Premier League season saw the 2019-20 Champions, Liverpool, host reigning European Champions Chelsea in a mouth-watering clash. Both came into this game on the back of impressive victories in their opening two games especially Chelsea who breezed past Arsenal without having to play in their best throughout the game.

Both Jurgen Klopp and Thomas Tuchel were looking to outclass each other with their tactics and in this tactical analysis, we will be seeing how the game resulted in a stalemate with a goal and point apiece for both sides. Let’s begin the analysis.

Liverpool lined up in their usual 4-3-3 formation with the famed trio of Salah-Mane-Firmino spearheading the attack while Klopp decided to retain the same midfield that beat Burnley last week to give Harvey Elliot another game as the RCM. 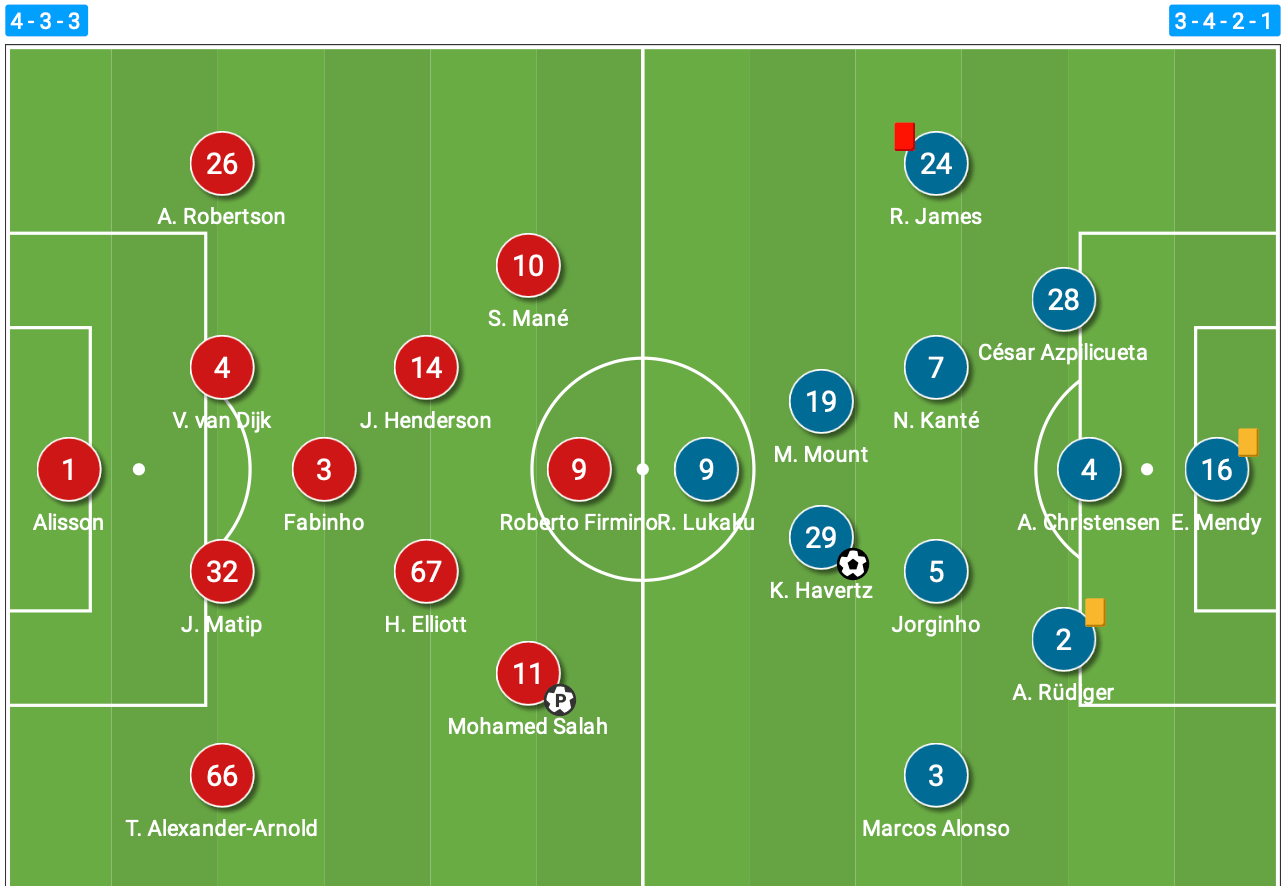 Chelsea, on the other hand, lined up in their usual 3-4-3 / 3-4-1-2 system as well with one change to the lineup that beat Arsenal last weekend as Kante came into the lineup in place of Kovacic to add some steel against an aggressive Liverpool side.

Both Liverpool under Klopp and Chelsea under Tuchel ever since his appointment have been applauded for the world-class defence that has seen both of them win a Champions League in recent years. Though Liverpool suffered from a lack of a sturdy presence at the back last season with Van Dijk and Joe Gomez’s absence, they are a different team with all their first choice defenders present and Klopp able to play his preferred system and principles.

Both managers set important pressing traps to outdo their opponent and stop their flow of play. Chelsea went with a 3-4-3 system that had multiple variations when they approached defensively. They wouldn’t press Liverpool very high and decided to settle in a mid to low block. Higher up the pitch, the shape would be a 3-4-1-2 with Lukaku or one of Havertz / Mount staying with him while the other stayed slightly deeper to mark Fabinho. When the ball was played to one of the CBs, the ball near forward would press the CB while the other would shift across a bit to block the passing lane to the other CB. In the example, we can see that Havertz pressing Van Dijk while Lukaku stays in the box to block passing lanes to Matip. Mount presses Fabinho and Kante presses Henderson who has dropped deep while Reece James (not seen in the image) would have come up to press Robertson. 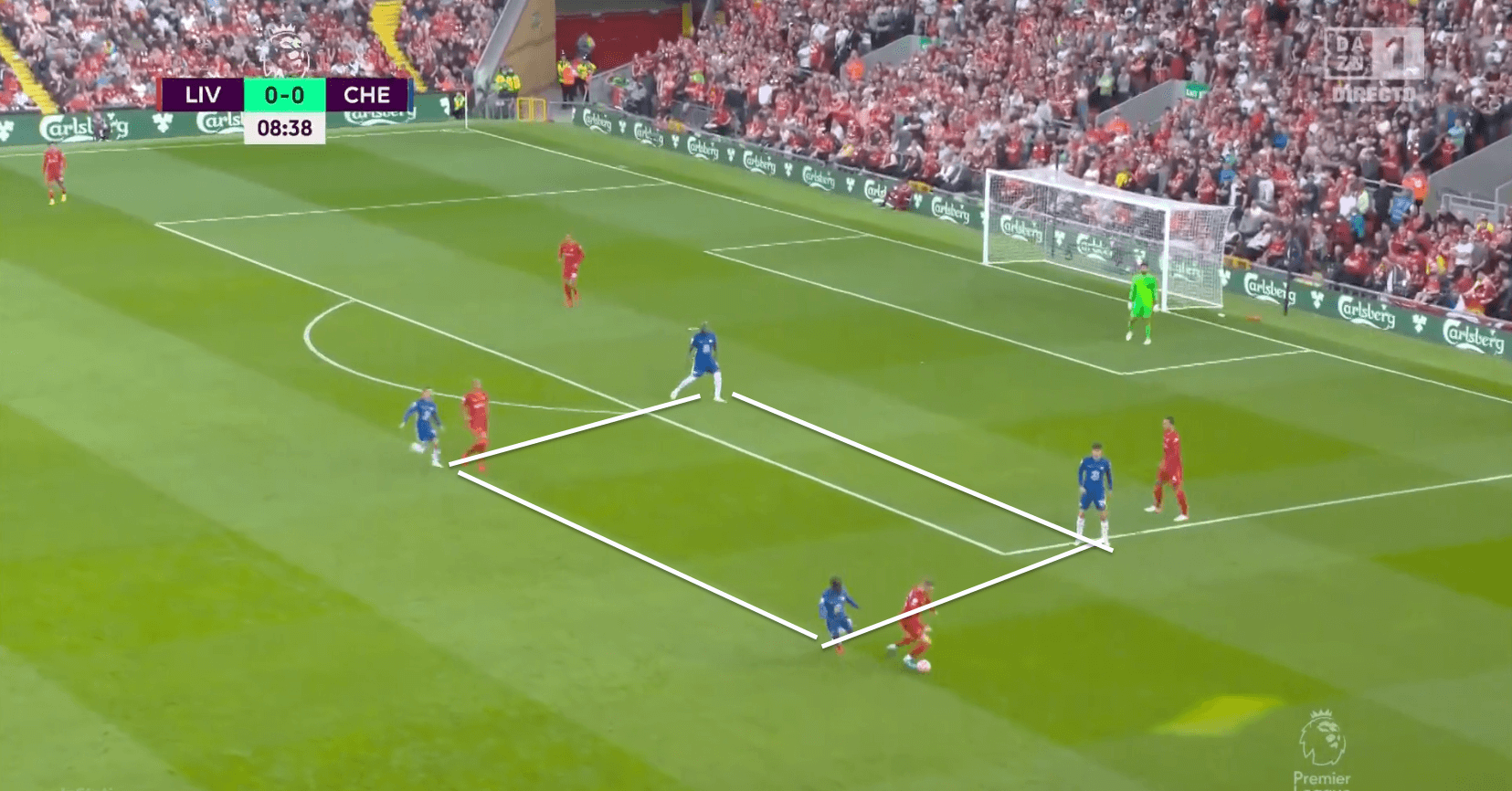 The idea was to force Liverpool to commit mistakes very high up the pitch and not necessarily winning the ball in the wings. But that was also an option when they shifted into a mid-block where they would switch to a 5-2-3 system pushing Mount into the front line to block central progression higher up the pitch itself. We can see that in the image below. 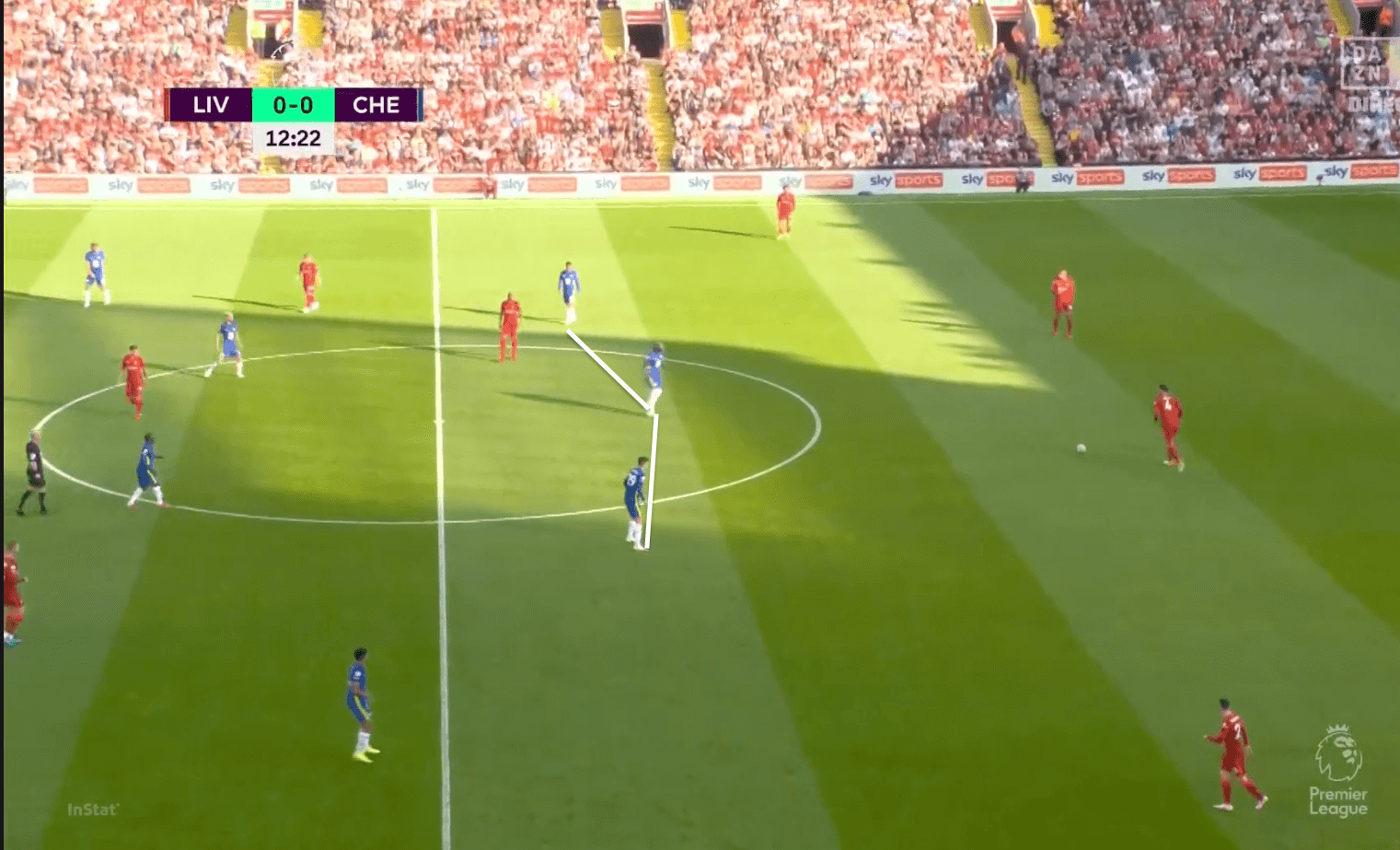 Liverpool now does not have many options to progress centrally and now have to move the ball to the wings and play it around the Chelsea block. None of the forwards is now accessible through direct passes to their feet with Chelsea forming a block around them to block all the possible passing lanes. The central coverage defensively is something that all the teams around the world prioritize while looking to force their opponents to low valuable regions or zones at the pitch from where chance creation is very difficult.

They would not just blindly press the opposition when the ball is recycled backwards to Allison or has gone deeper to the CBs. If the ball has gone higher and when there were instances where Fabinho dropped, the likes of Havertz or Mount would not press him and would instead drop deep to maintain the coverage at the centre of the park as engaging too much would often expose the central areas where Firmino or Mane would drop into. 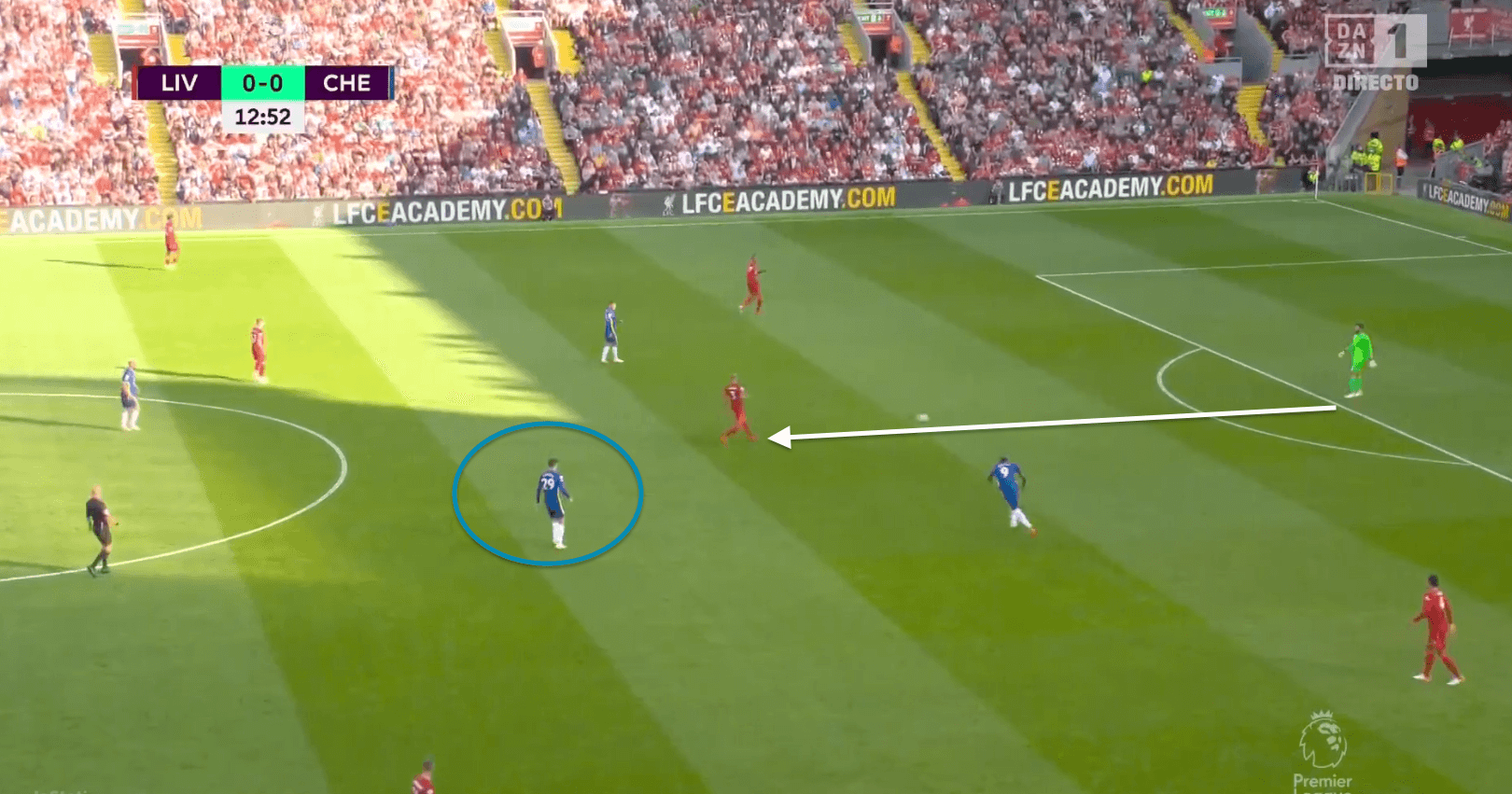 We can see Jorginho in the image realizing that there is an option for Liverpool to attack the space behind with Reece James also moving higher up the pitch to press the opposition full-back. He decides to drop deep and cover the space instead though Liverpool have a poor structure here as they don’t have anyone to access that width high up the pitch. 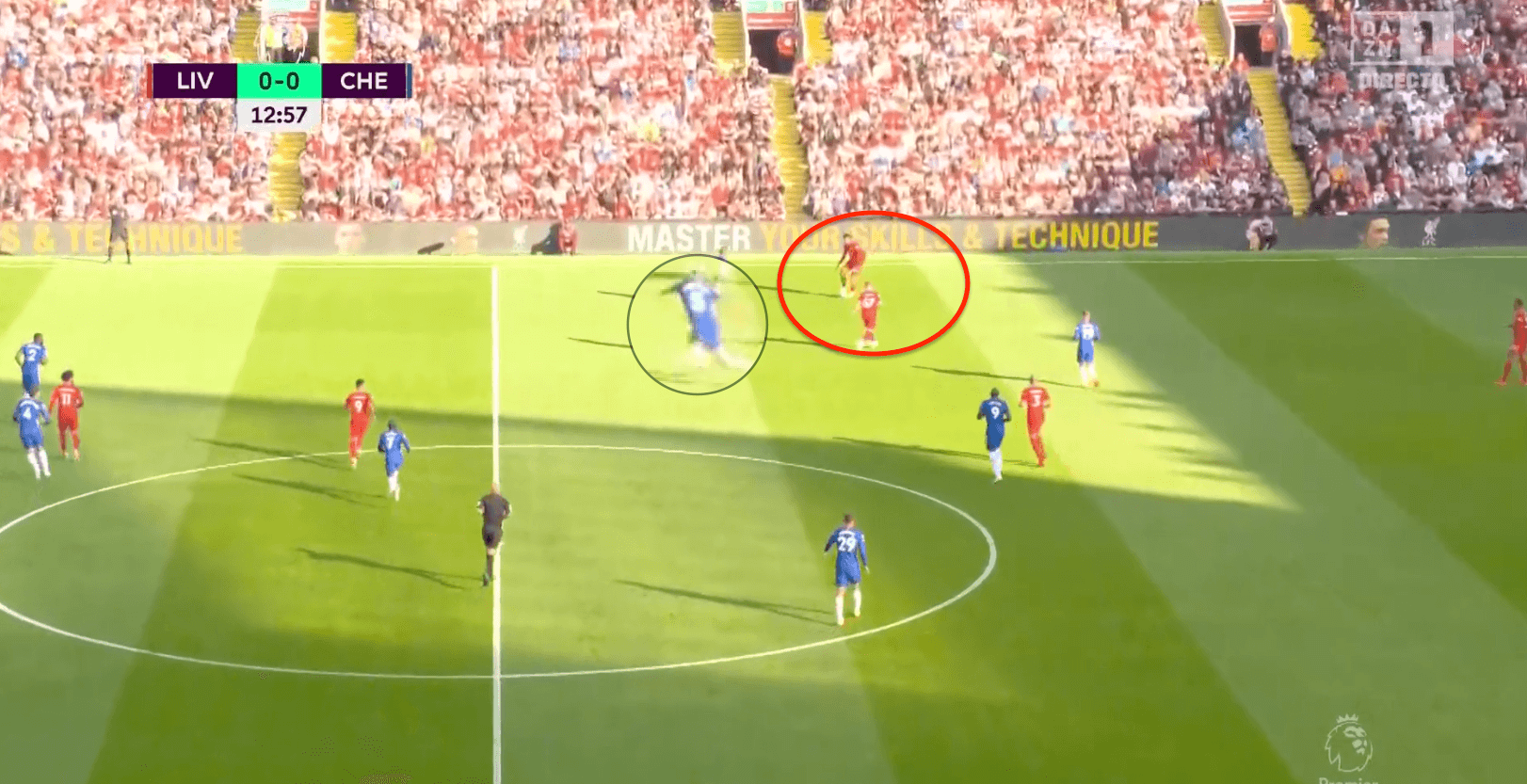 But this wasn’t always the case as Liverpool did go forward when there was a rare occasion of indiscipline or lack of communication among the Chelsea players. We can see that in the image below where Reece James has gone higher up 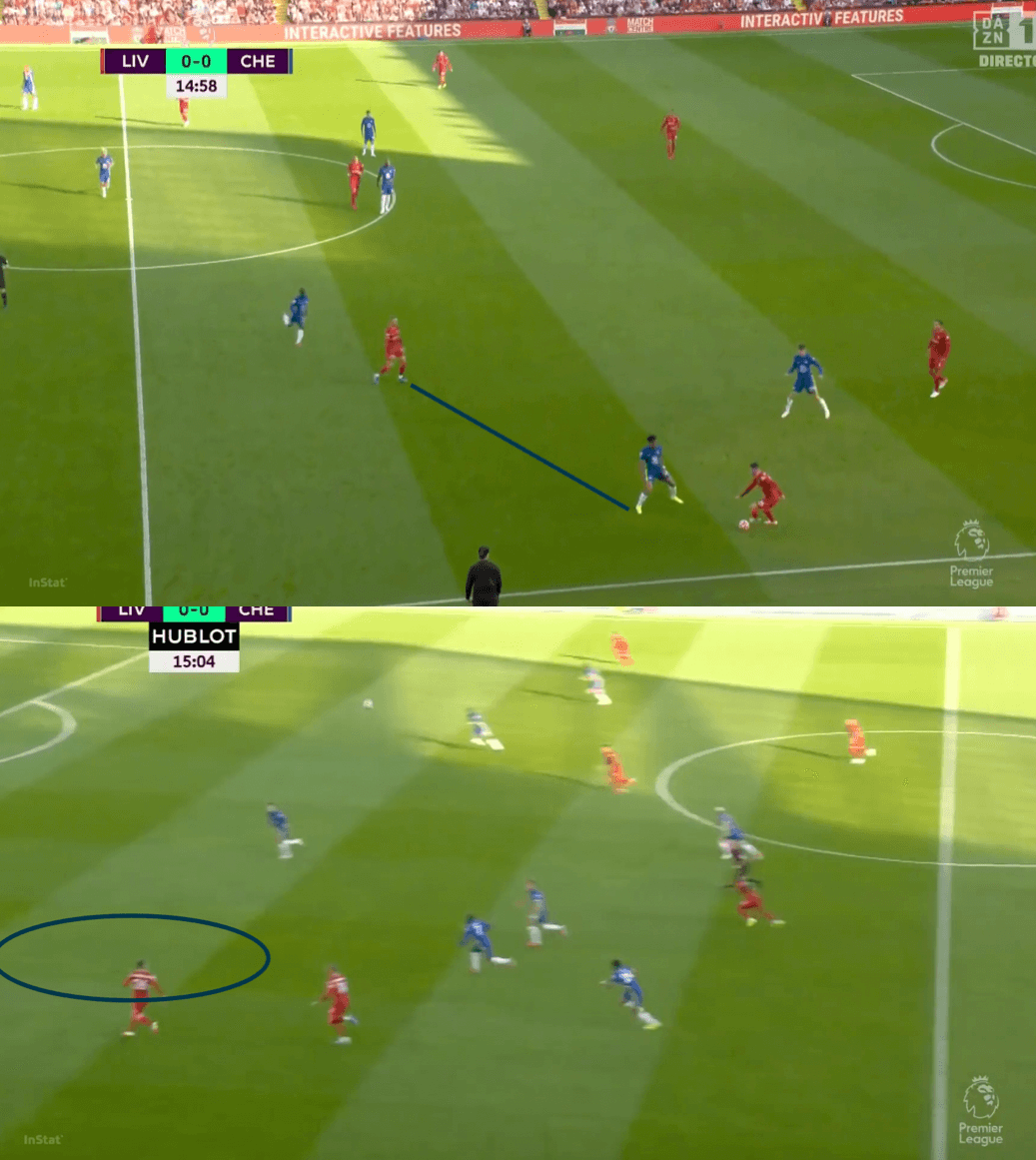 Similarly, Liverpool would also form a block that would look to block all the passes for Chelsea into the central regions. The forwards would press their ball near CB with Firmino pressing Christensen in the image below and forcing the Dane to pass the ball to Azpilicuetta who would be pressed by Mane once the ball moves to him while the pivots would be closely pressed by the Liverpool midfielders depending on the ball side. The full-backs would press the wing-backs higher up the pitch while the Liverpool CBs would maintain a good starting position to defend the passes that are being sent to the forwards. 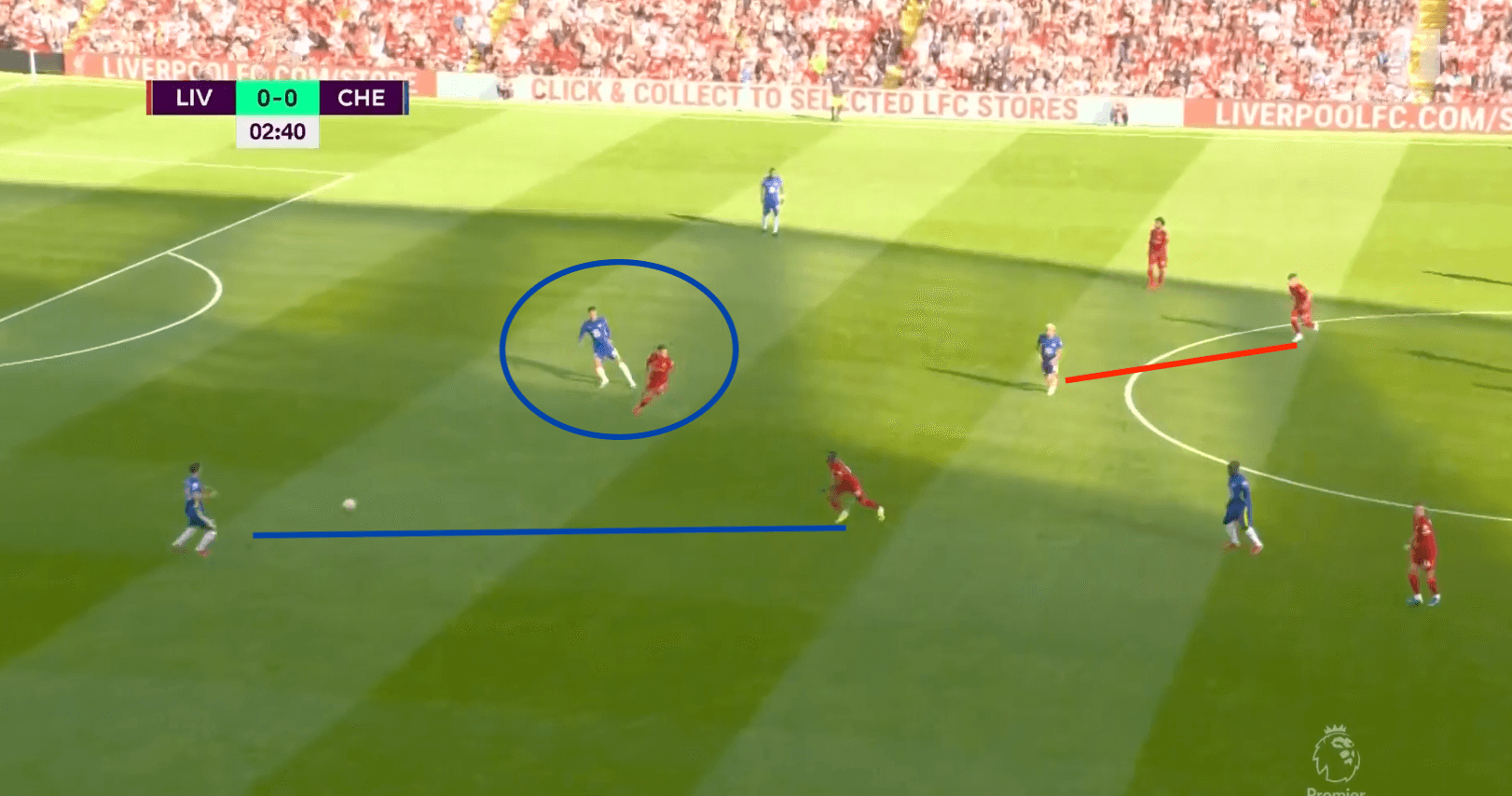 We can see how the Liverpool block has moved to the opposite flank with each of them maintaining good positioning with each other. Now Chelsea has no other option but to move the ball to the flanks and again play it around the block. 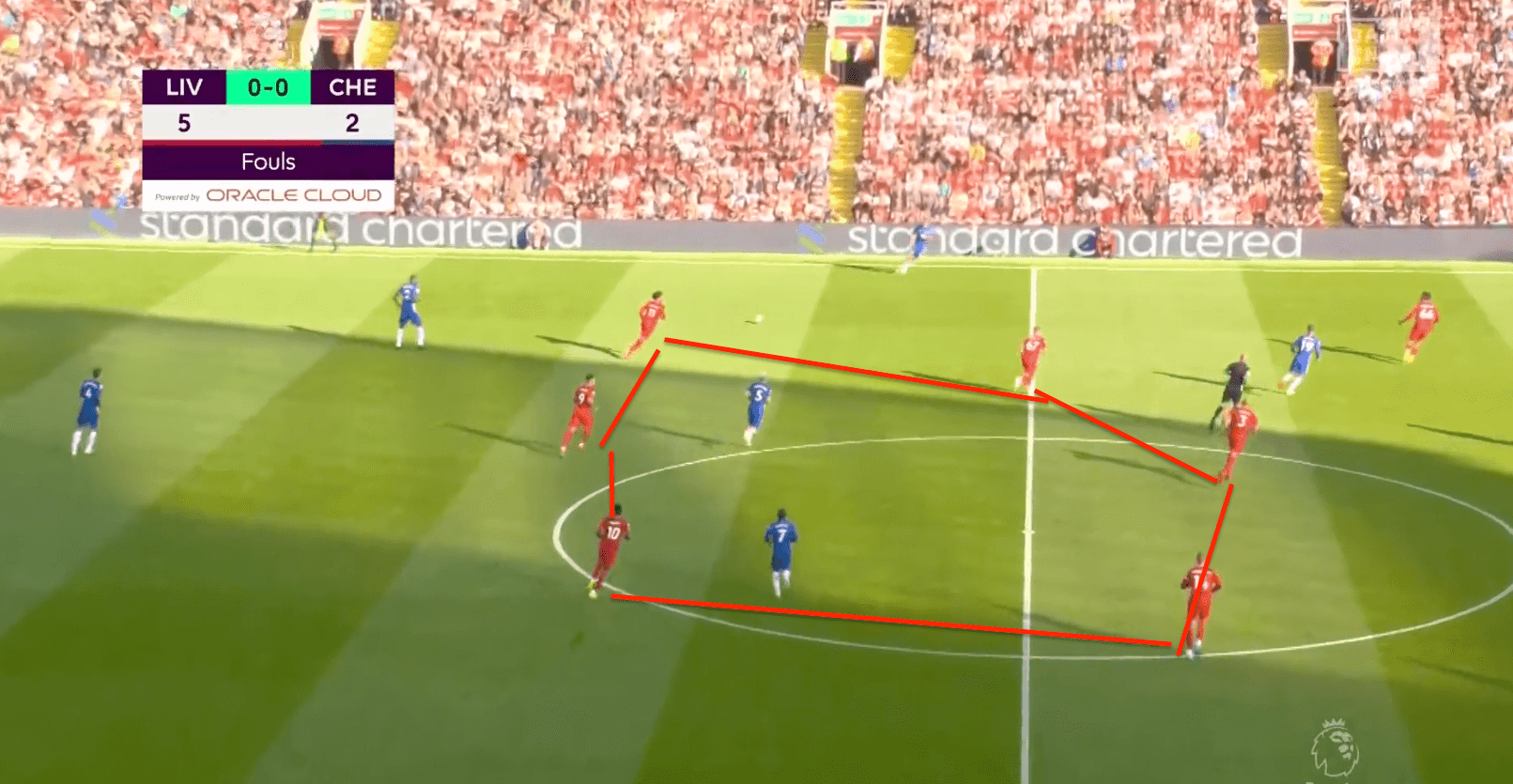 Salah’s positioning changes the dynamics of their attack

The common theme between all the possession dominant teams over the past few years is their usage of 3-2-5 / 2-3-5 formation. We have seen Manchester City under Guardiola and Liverpool under Klopp popularize it. The difference between them is that Klopp uses his full-backs to provide the width with his wingers positioned in the half-space. But in this game, Klopp decided to alter his system by asking Salah to stay wider and for the likes of Elliot and TAA to access the half-spaces. Another reason is to expose the positioning and defensive weakness of Marcos Alonso on that side. We can see an example of that in the image below. 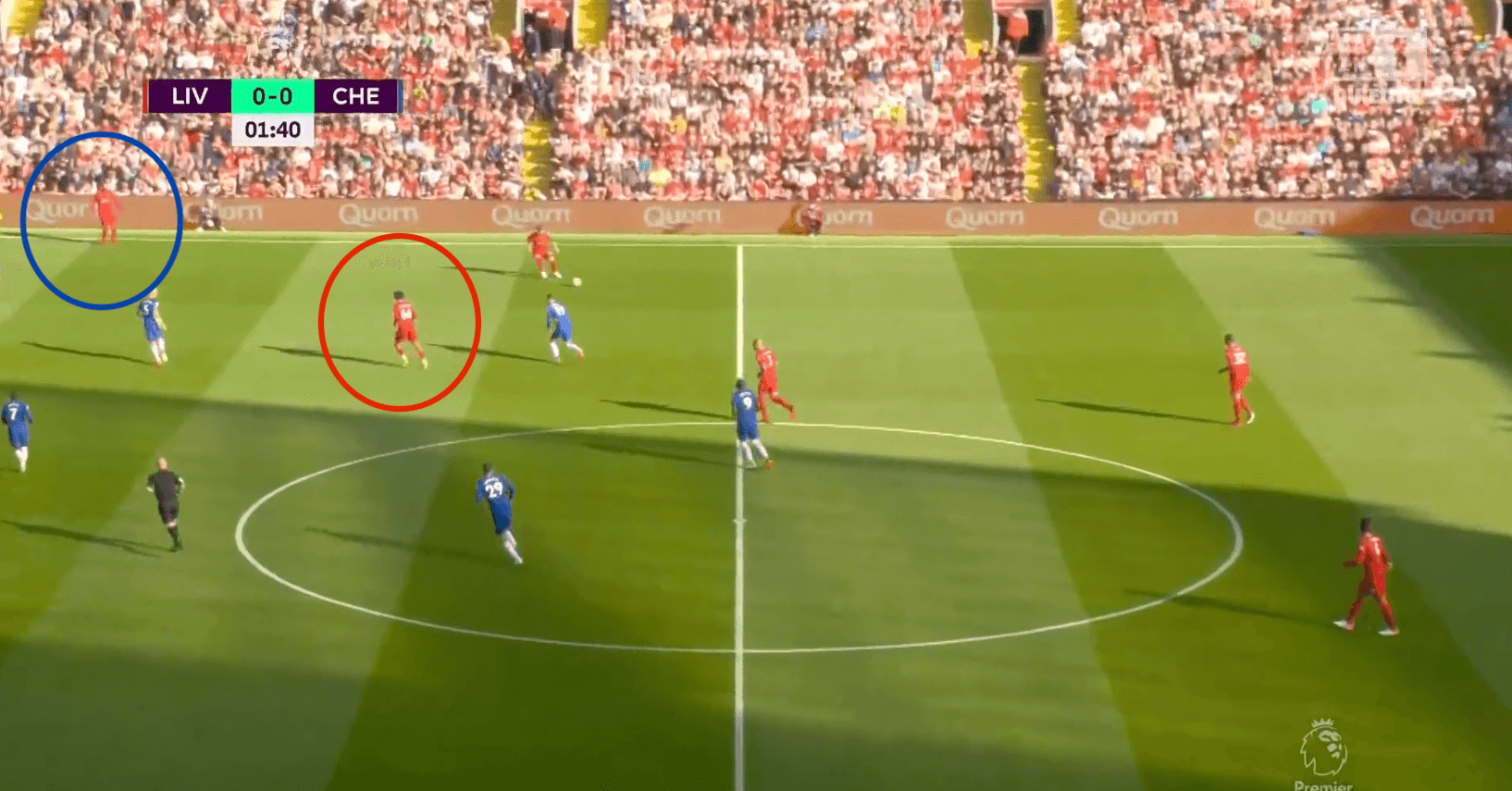 Salah has inverted and so has TAA into the midfield with Elliot receiving in this instance as a quarterback. The positional rotations between the trio were very very good throughout the match and would often cause Chelsea a lot of issues.

The positioning of Salah very wide and TAA very deep gave Chelsea two issues to deal with. The first one was to deal with long balls from TAA from deep which is something that they cannot afford to ignore as the English full-back is elite in providing high value passes even from such regions. They would engage Alonso to take care of that while the defence occupied by Salah would be positioned slightly on the outside of the wide CB. This means that Elliot could now receive the pass in the half-space. But the issue for the teenager was he received the ball in the wrong angles and it would be easy for Chelsea to press him or his first inclination was to pass it wide to Salah with the angle he received. 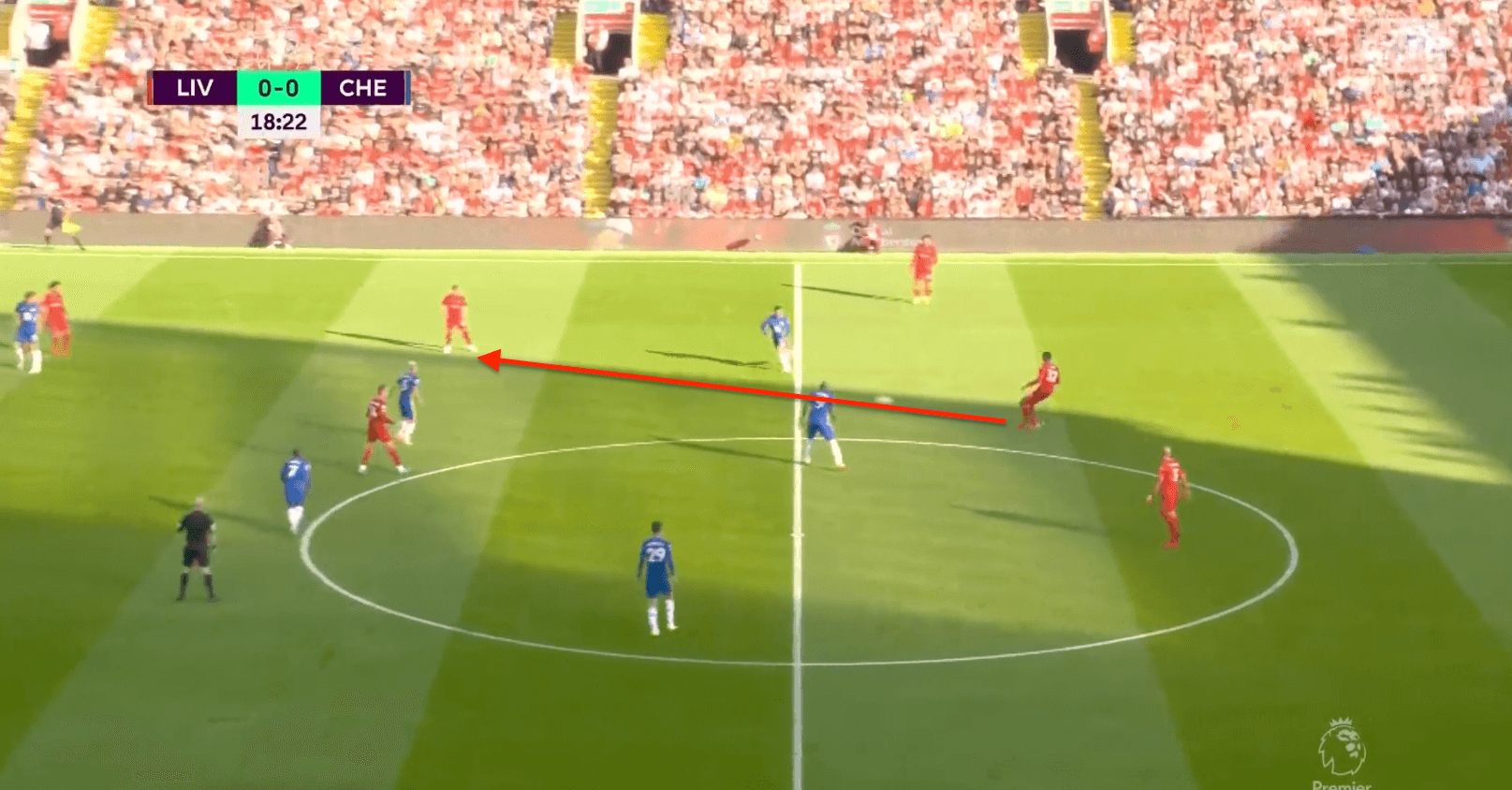 We can see another instance of Elliot receiving the ball in the half-space but his angle is more towards receiving the ball and playing it out wide to TAA instead of playing the cross himself as we can see both Mane and Firmino waiting in the box for a cross. 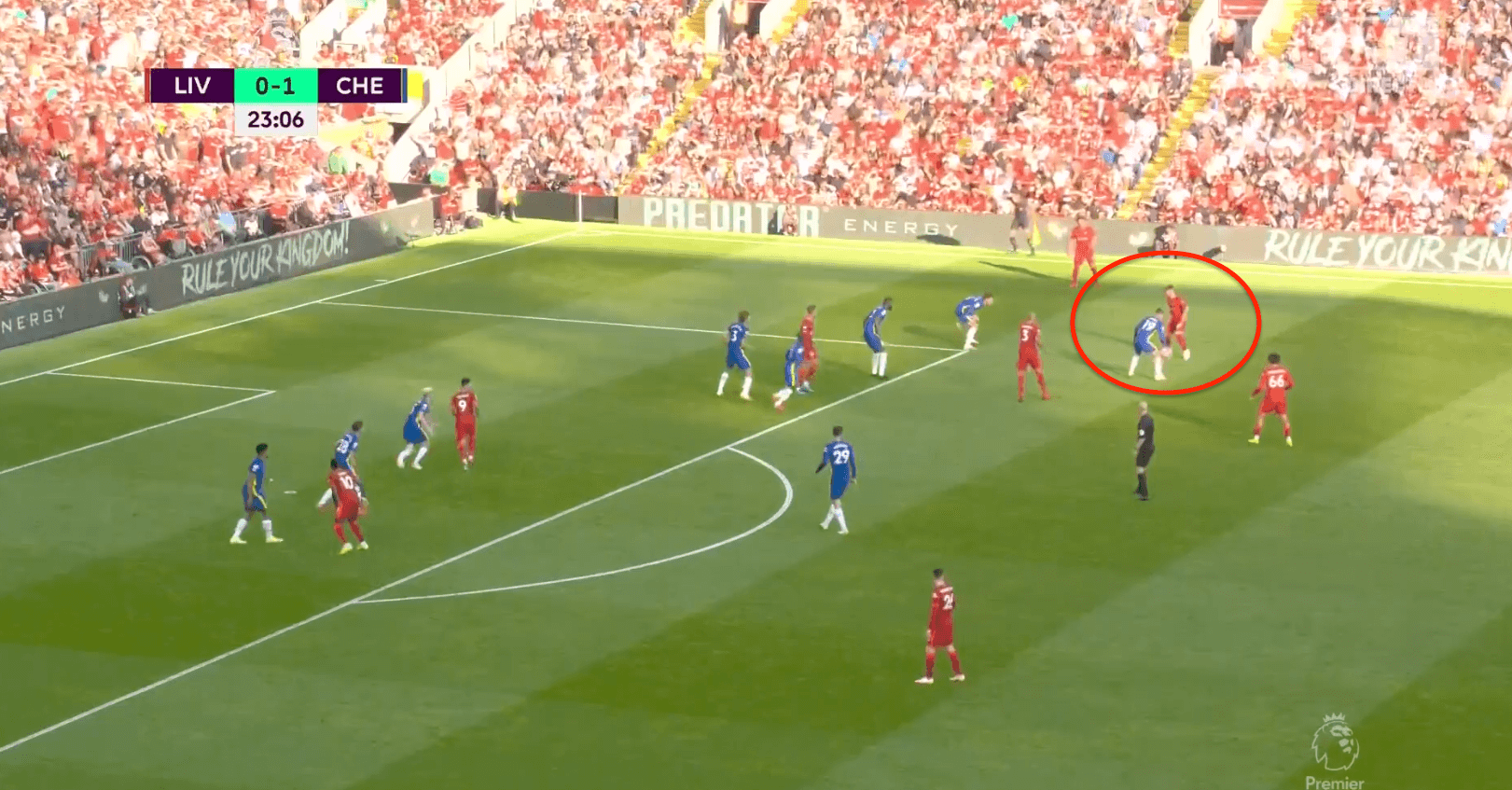 Though as the game went Chelsea understood the effect of Elliot receiving the ball and driving with it forward and decided to place Alonso slightly deeper and close to Elliot instead of TAA. The tradeoff did look feasible as TAA playing ball from the deep could be dealt much easier when compared to Elliot carrying the ball forward. We can see that in the image below where Liverpool form a diamond at the centre with Firmino dropping deep but Alonso has positioned slightly towards Elliot making it difficult for Fabinho to play a pass to him after receiving the ball. 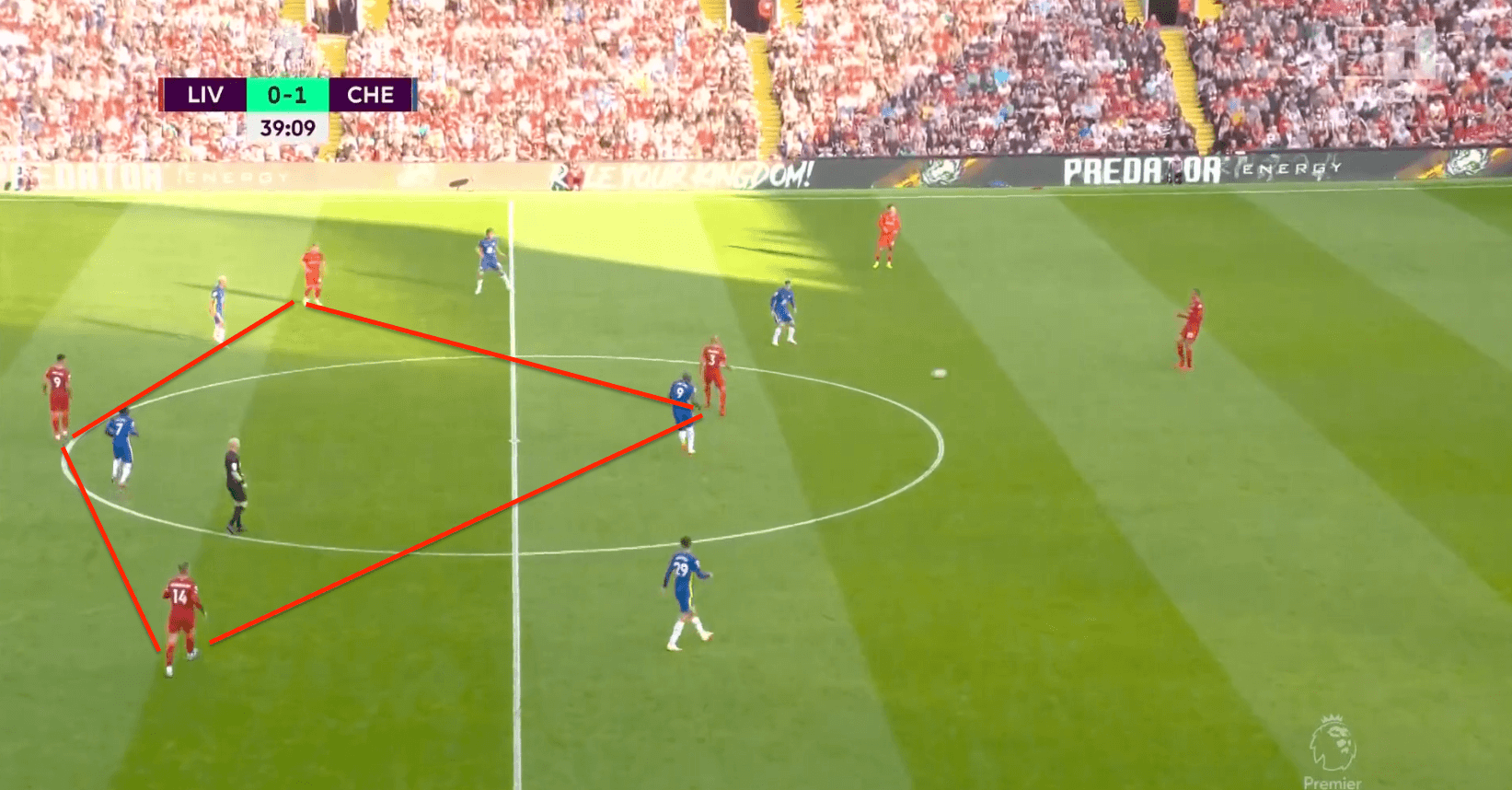 Even in the above example, the key thing to note is how Liverpool have committed Salah high up to ensure that Firmino receives in space. This vertical stretching was often seen when Liverpool attacked but wasn’t used well. We can see how Mane drags a defender deep, opening up a space for Elliot and he also makes it. But Liverpool doesn’t have the necessary players in the right position to make that pass.

The red card did take away the intensity and competitiveness from the game with Chelsea forced to play with 10-men. They defended very well throughout the game with great rigidity and discipline. They shifted into a 5-3-1 system with Mount dropping into the midfield while Lukaku was the sole forward leading the line. 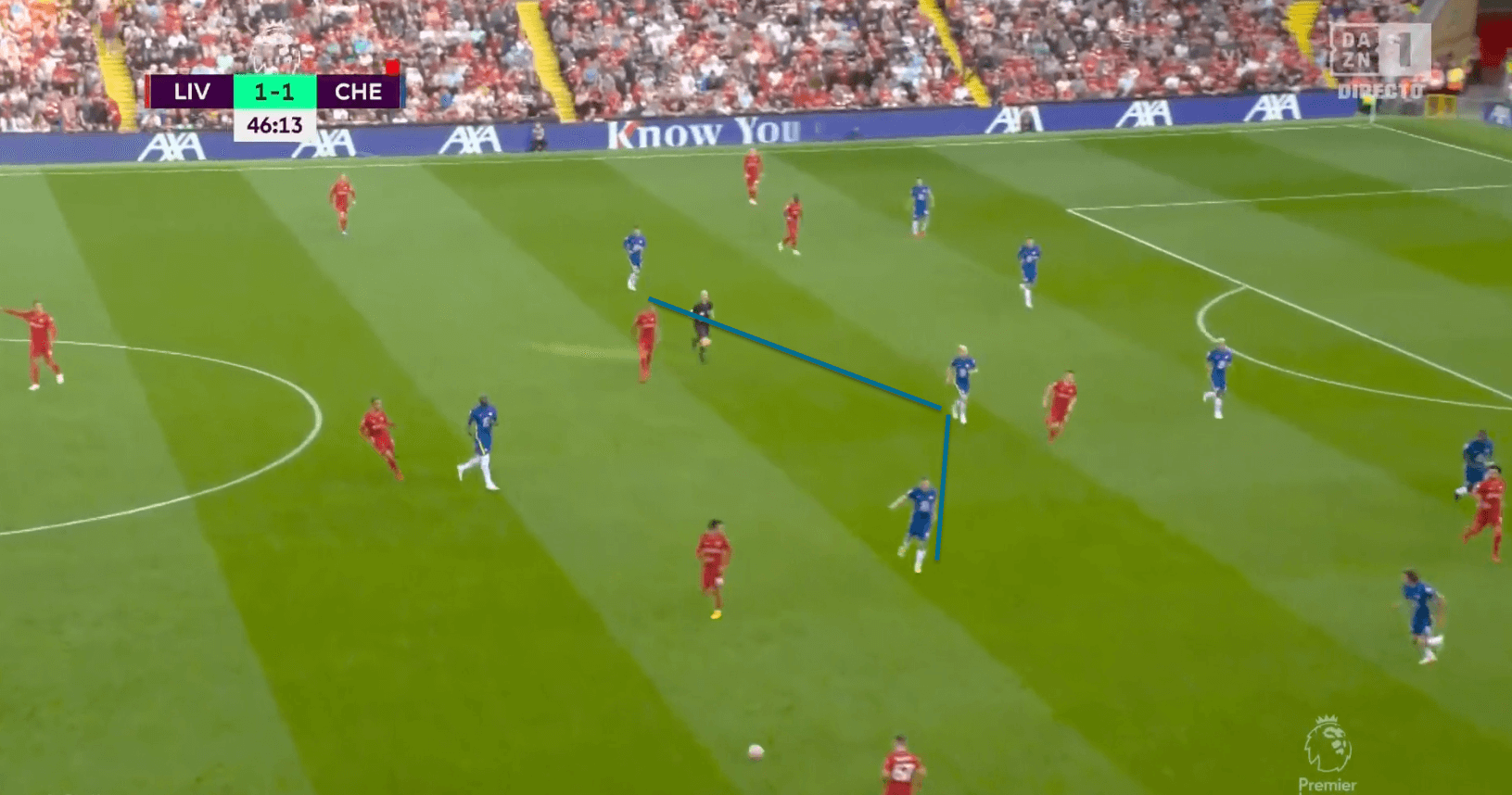 The great thing about their defence was communication and spacing between the final defensive line. We can see that in the image below where the defenders are spaced very well with close distances between them and they moved well as a block from one side to another. 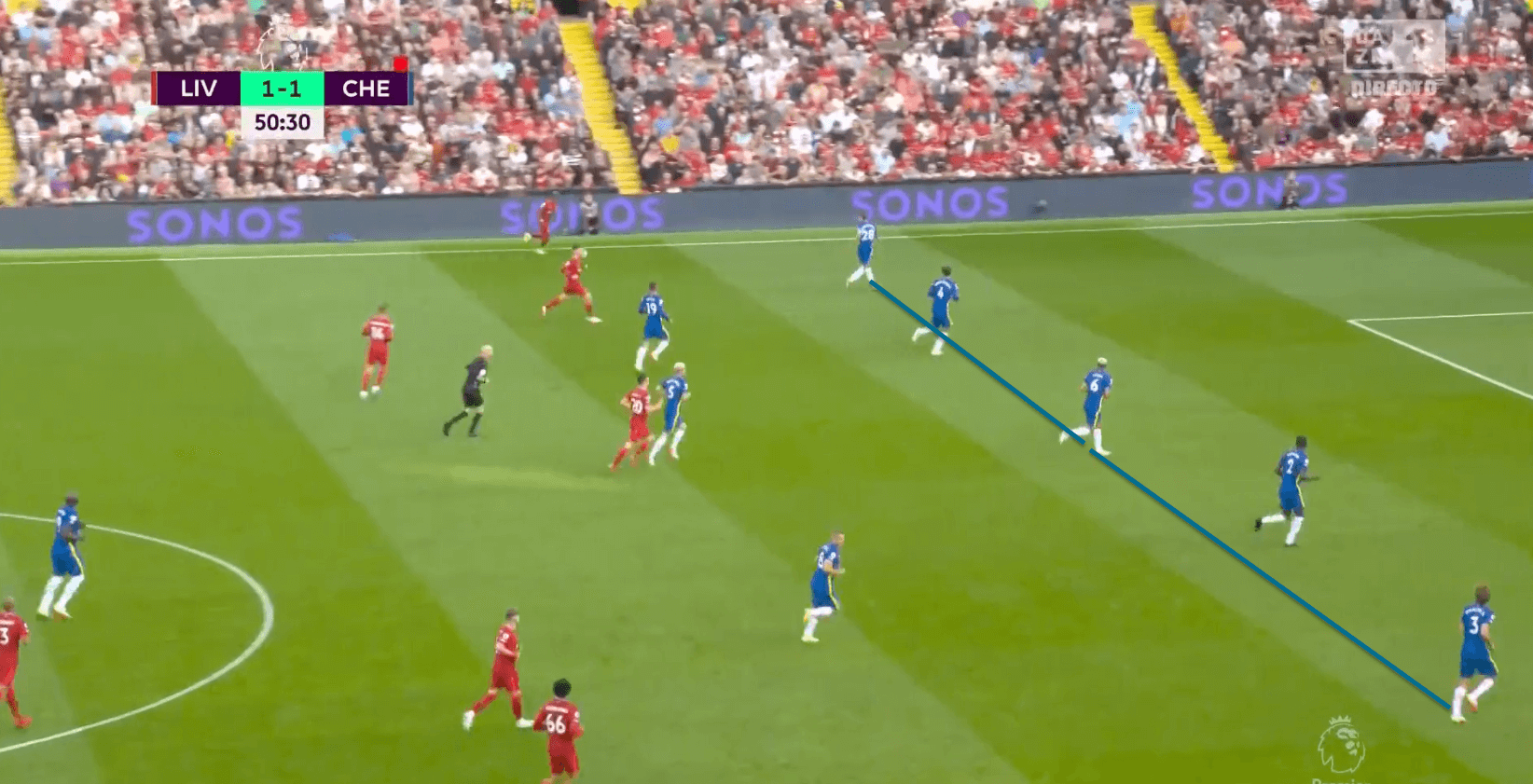 This coupled with Mendy’s stupendous keeping and good box-defending, Chelsea were able to frustrate Liverpool in the entirety of the 2nd half.

Chelsea shrugged out an impressive draw with 10-men at Anfield in a game filled with controversy. This would surely reflect as a win among the blue faithful given the opposition and the territory in which they played. Liverpool meanwhile would be concerned with the lack of clear cut chances created and would be looking to return back to the winning way post the international break.