Last week, RB Salzburg beat Brondby IF away from home in Austria, taking a 2-1 win to the Brøndby Stadion. Even playing away from home, Matthias Jassile kept the 100% winning record and led the team into the UEFA Champions League group stage.

Compared to his predecessor, Jesse Marsch, Jassile was more consistent in the formation. Although there were some details that required better executions in the early days, his cautious 4-3-1-2 has helped the team to win games with better control.

This tactical analysis will give an in-depth analysis of  Salzburg’s press, which is the fundamental part of Jassile’s game.

As mentioned, Salzburg came with a 4-3-1-2 formation and started a strong eleven. The only change they made was replacing Nicolás Capaldo with Brenden Aaronson, who scored a goal and killed the tie. Another goal scorer was Benjamin Sesko, who partnered with Karim Adeyemi as the strikers.

The football of RB teams are deeply influenced by Ralf Rangick, the disciple of Valeriy Lobanovskyi, and Salzburg were also included. The Austrian champions have produced top managers such as Marsch, Marco Rose, Adi Hütter, Roger Schmidt, and some others in these years. High pressing and the use of traps have always been seen from these head coaches.

In the first section, we dissect the high press of Salzburg and explain why it was difficult for Brøndby to break. 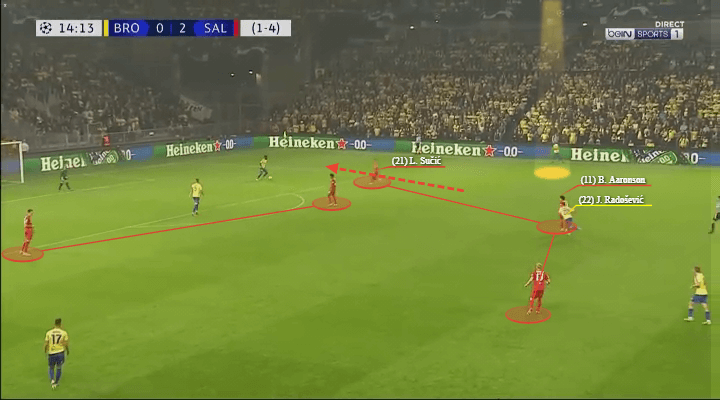 The team stayed in a 4-1-3-2 midblock shape initially with Mohamed Camara as the defensive midfielder to cover spaces. Since Brøndby played with a back three, Salzburg always matched numerical equality in the first line by moving Luka Sucic up, so they could press Kevin Tshiembe, the left centre-back. In the midfield, Aaronson was tasked to man-mark the holding midfielder, Radošević, so Brøndby could not play through the centre in the attack.

The above image shows the Salzburg shape with each duty of the pressing players. When Sucic was pressing, Nicolas Seiwald dropped a bit narrower and moved into the centre to maintain compactness. However, the 4-1-3-2 initially gave Brøndby wide spaces to play as the left wing-back would be unmarked, as we highlighted in yellow. 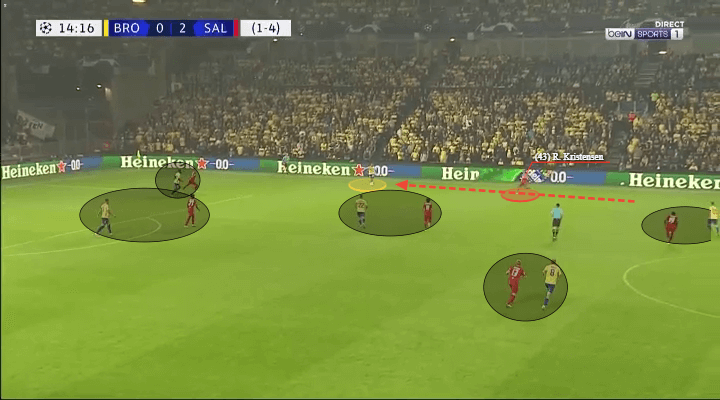 But this was a trap! Salzburg intentionally baited Brøndby into the flank and they would press aggressively when the pass went there. In the previous image, they let the opponents reach the flank, and now Brøndby were fallen into the side trap in the next scene.

Since Salzburg committed Sucic to press the left centre-back, a return pass was not possible as the passing lane was cut already. Meanwhile, all short passing options around the ball were man-marked by Salzburg, including Camara who was going to cover the half-spaces. Usually, those wide passes triggered the Salzburg full-backs pressing from deep. Although the distance to travel was huge, but Rasmus Kristensen had only one clear mission: to make contacts and attack the ball. Under such intense defending, Brøndby found it difficult to move the ball into advanced areas.

It was another scenario in the second half, where Brøndby opened their shape a bit so space to play increased. Salzburg dealt with it very easily with the same way of the press – Sucic moving out wide to press centre-back when both strikers could mark the other two.

So, Salzburg had the flexibility. When the left centre-back played into the centre, he could intercept and Kristensen would be closing the flank if the full-back went vertical. 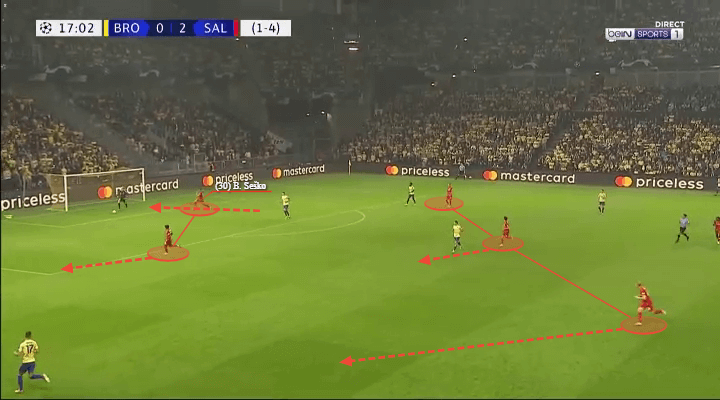 The next example shows another form of side trap of Salzburg, the concepts were very similar. Again, you could see the 4-1-3-2 shape of Salzburg – the strikers would press the goalkeeper as well and it was Sesko this time. This level of intensity forced an error and a counter-attack goal in the final third for Salzburg as well.

When Sesko was pressing Mads Hermansen from a diagonal angle, the others were also moving diagonally to the other flank. From here, you could see the well-trained troops of Jassile, as they read the direction of the attack early, so they could swing to the other side and arrive on time after a switch. 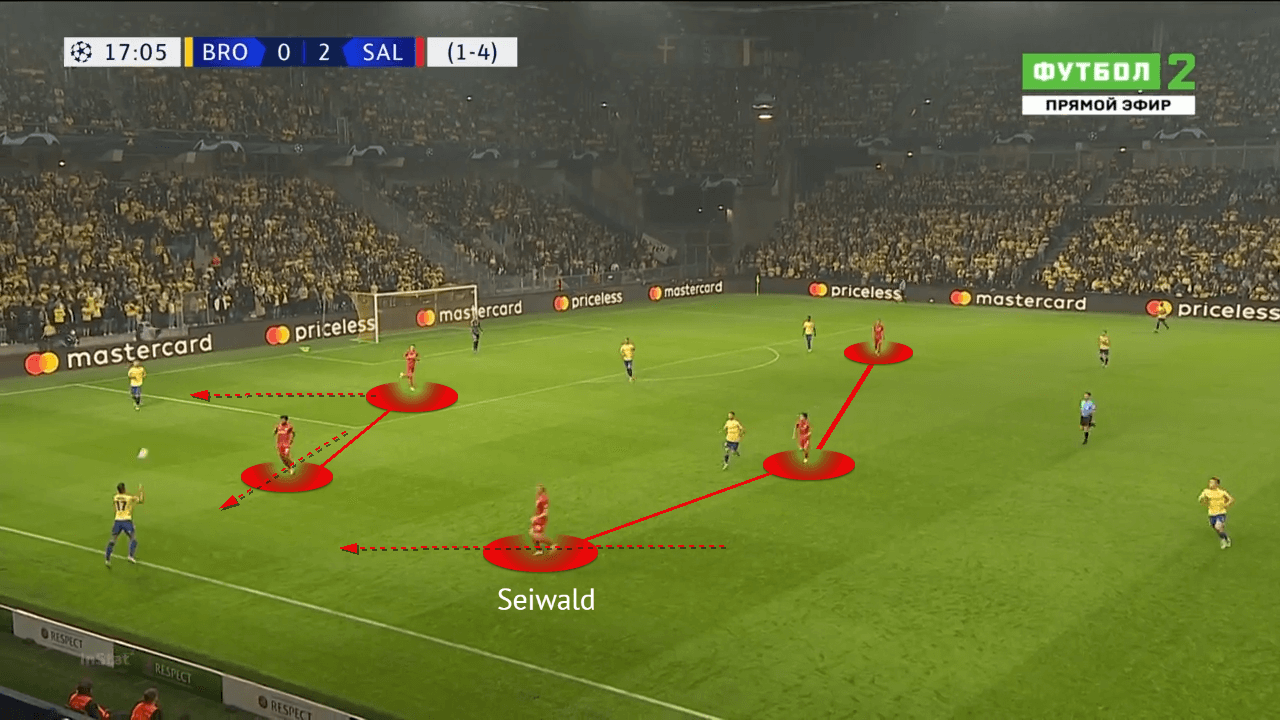 And now Brøndby reached the flank with a lofted pass. The Danish side was brave to use such kind of pass to switch in this game, but the side effect was difficult to control. When Andreas Bruus received, he must chest the ball down and it gave the opposition time to close his angles.

The whole Salzburg team was moving along to cover that side. With the fewer numbers on the far side, they could double-press the ball and recover the ball at higher areas. Here, Seiwald will press together with Adeyemi from two angles, while Sesko could close the ball near the centre-back. The side trap has worked quite well in this game and Brøndby were difficult to escape. 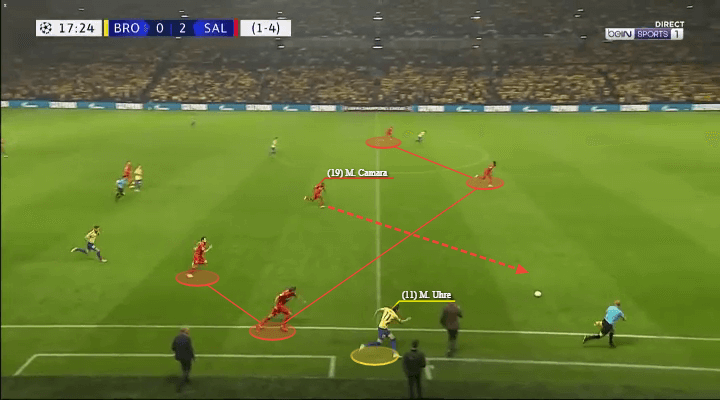 When Brøndby were a bit more direct and using the long balls to bypass the press, Salzburg were counting on the centre-backs to defend aerially behind the full-backs. Both Maximilian Wöber and Oumar Solet were physically dominant in this game. However, Brøndby might still get away with individual tricks, such as Mikael Uhre sneaking behind Wöber in the above situation.

Under those circumstances, Salzburg’s solution was always Camara. The defensive midfielder must anticipate the danger and cover spaces effectively, which he got back and covered Wöber here. 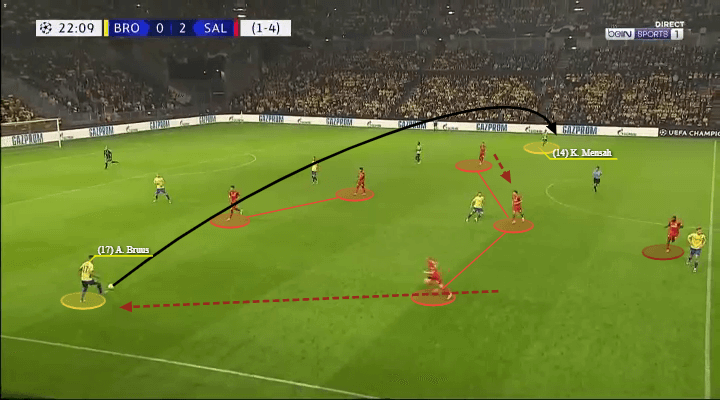 After 15 mins, Brøndby tried to adapt the press of Salzburg. They tried more diagonal passes and switches to hit the opposite side of the oppositions. In this image, Salzburg swung to press as Sucic moved inward to free Seiwald on the other side. However, Seiwald was a bit late this time, so Bruus had the space to make a lateral switch to the left wing-back.

Nevertheless, Brøndby players were not controlling those passes neat enough, so there was always time for Salzburg to fall into a block and defend in deeper areas. 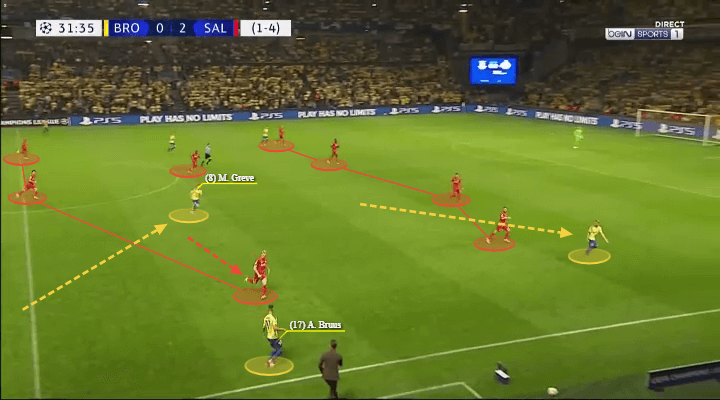 It was another scenario in which Brøndby broke the press. Greve’s movement to the centre initially draw Seiwald away, opening spaces for Bruus on the right flank. Hence, the right wing-back could receive and exploit the late Seiwald press. The condition of attack was good, but Brøndby rarely created threats from flanks.

There were some reasons. Firstly, their strikers tended to drift wide very early, falling into offside positions. Secondly, when the striker was also on the flank, the angle to support was vertical and a defender would be following, it was difficult to turn to the centre again. And thirdly, when strikers were staying out wide, there was no early crossing option even the Salzburg centre-backs split. Brøndby must go to flanks with short passes all the time.

Another feature of Salzburg’s football was their direct and vertical style of play. Jassile’s men always used a 4-3-1-2 to break the opposition press. 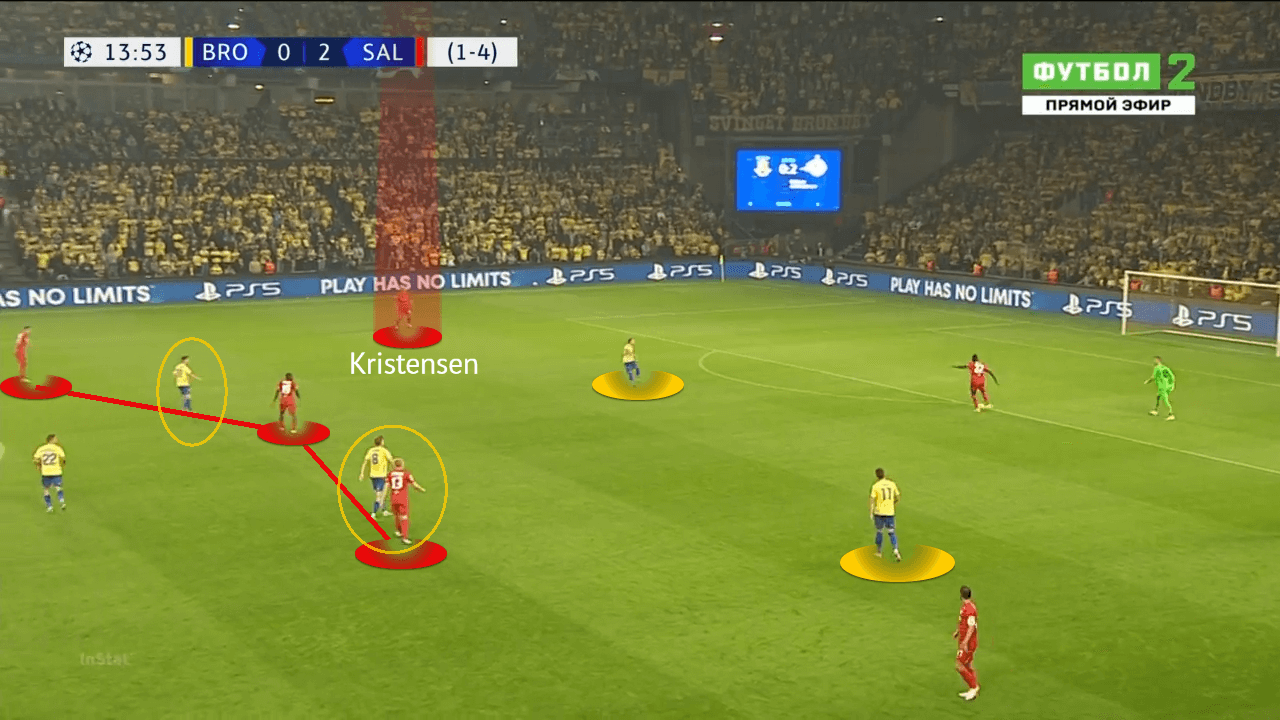 Salzburg played with a pair of deep full-backs, who would be providing the width outside of the formation. Then, they would have an option out wide as the two centre-backs absorbed pressure from the two strikers of a 5-3-2.

It was clever to use a 4-3-1-2 as the “3” of Salzburg could always match the “3” of Brøndby, so the opposition wide midfielders were late to press full-backs as they were in the centre initially. Here, we circled the man-man occupation in the midfield, and so Kristensen had the spaces to receive and play in the build-up. 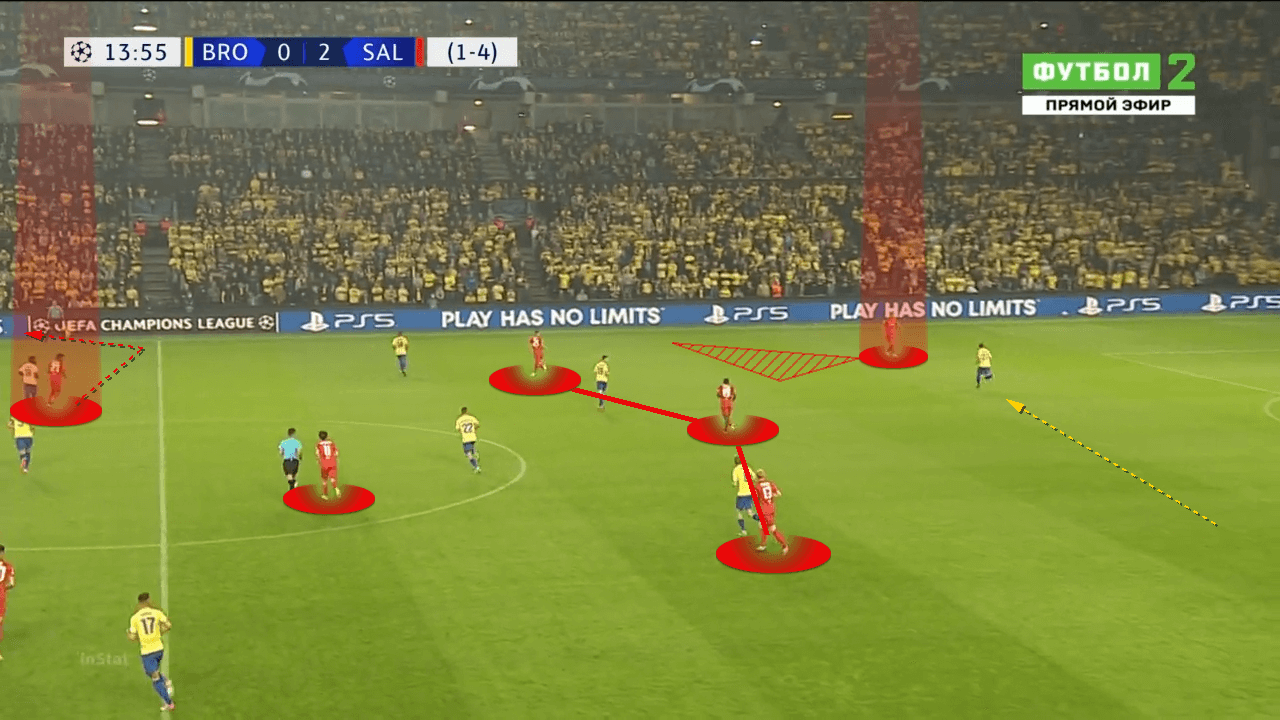 Now you can see which space was shown to Kristensen. The striker was pressing from a lateral angle, but without a wide midfielder to press, Kristensen could simply drive forward to break the first line. Then, it was always a simple ball to release the strikers in wide spaces. The runs will be dangerous when the opponent wing-backs tried to step up, leaving the centre-back alone. 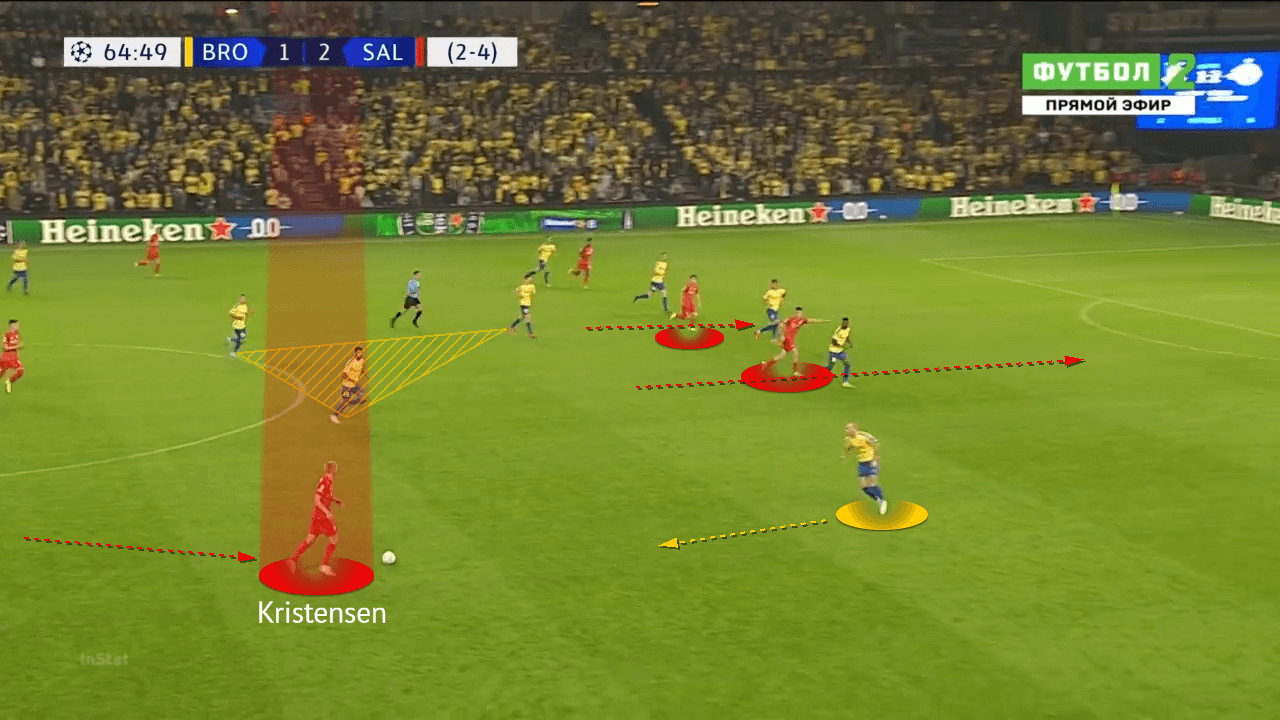 We could see Kristensen receiving in an advanced area because of the above setups. All of the opposition midfielders were drawn into the centre, so the half-spaces were opened for the former Ajax right-back. The remaining task was to find Adeyemi or Sesko behind the defence. 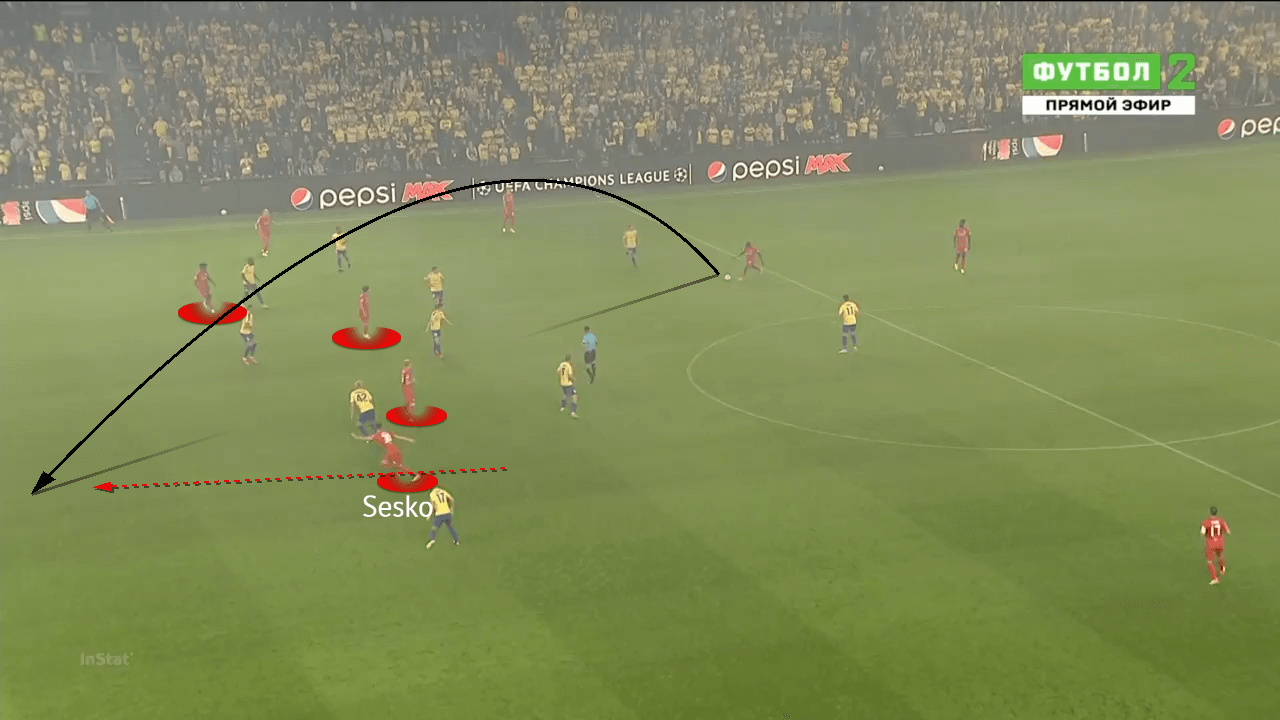 It was also the direct runs that led to the opener of the second leg. In the above image, you could see Sesko running behind the centre-backs and finished the chance. The goal should also be credited to Salzburg’s strong occupation of spaces between the lines, such as Aaronson and Seiwald were behind the opposition midfield. They fixed Brøndby central defender’s attention so Sesko could exploit the blindside.

This was a very convincing and well-deserved win by Salzburg as they were clinical to beat Brøndby in both legs. Unlike his predecessor, Jassile applied cautious tactics in the early days, which was rewarded by a good run, also resulting in lower xGA/90. They will face LOSC Lille, Wolfsburg, and Sevilla in the group stage.

As we have shown in this analysis, Brøndby suffered against the high press of Salzburg, and they only had limited opportunities to find the net. We will probably see more from them in the UEFA Europa League as well. 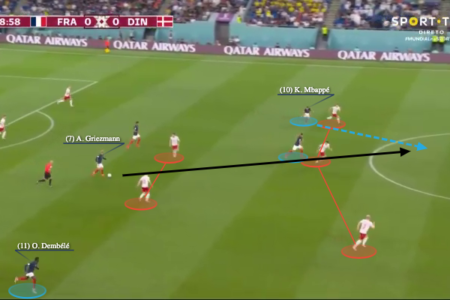 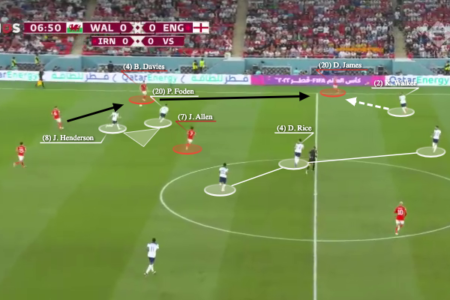 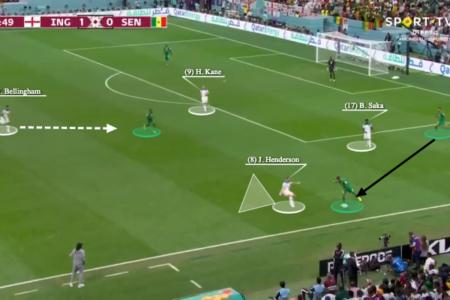