The Austrian Bundesliga 2021/22 began with a clash between the champions RB Salzburg and Sturm Graz at the Merkur Arena on Friday night. This was Salzburg’s first league game since Matthias Jaissle replaced Jesse Marsch as the head coach and the team came back from behind to win the game by scoring three within 17 minutes.

This tactical analysis is a review of the key tactical points of this game. We will explain the positives and negatives to take, as Salzburg were good in the transitions – but there was room for improvements in the attack.

Sturm Graz came with a 4-3-1-2 formation with the new signing David Affengruber starting as the right centre-back. The rest were the key players of Christian Ilzer since last season.

RB Salzburg also played in an identical 4-3-1-2 formation. These groups of players were new as the likes of Patson Daka, Enock Mwepu, and André Ramalho all departed over the close season. In the midfield, we saw new faces – Nicolás Capaldo and Nicolas Seiwald starting with the experienced Zlatko Junuzovic. The returnee from FC Liefering, Benjamin Šeško, also got a chance to start with Karim Adeyemi at the front.

Under the influence of Ralf Ragninck, the Red Bull teams were always the dominant side in transitions as they valued the importance of counter-pressing. In the offensive transitions, they also had a clear set of philosophies on how to create the opportunities and we could see some of them from Jaissle in this game. 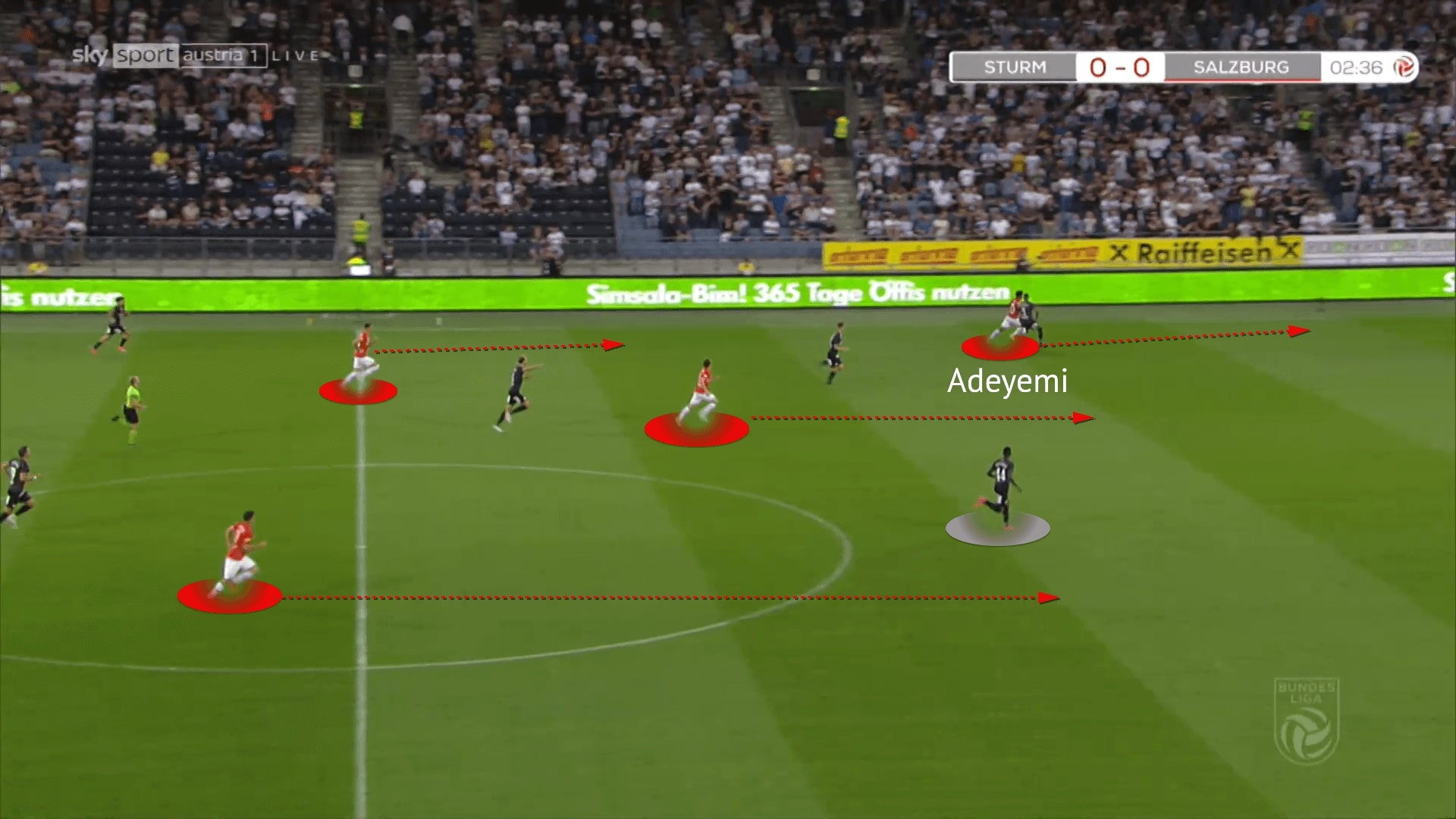 Salzburg were a real threat in the offensive transitions as they always tried to go forward and create opportunities in this phase. Including the equalizer from Adeyemi, they often generated shots within 6-10 seconds after the recoveries. The fundamental concept to support their high-speed attacks was the sprints of players – in every counter-attack, you would see at least three to four red shirts running forward to help.

For example, in this image, Adeyemi received at the outside and is trying to take on the defender. Although his teammates would not know Adeyemi could dribble past the opponent or not they all dashed forward – so there were multiple options to attack the penalty box.

This is a mental belief of the team building and a good legacy from Marsch’s Salzburg, instead of just purely tactical moves. 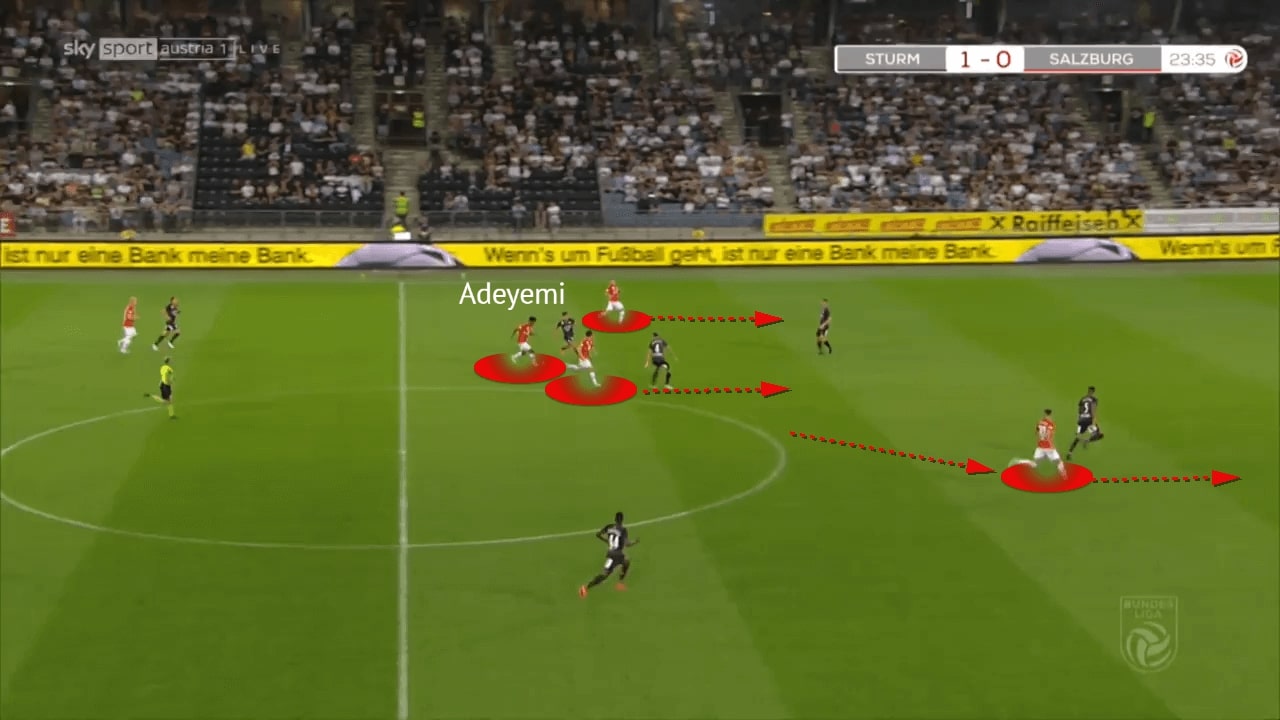 On this different occasion, Adeyemi was drifting forward inside and you could see the forward sprints were creating spaces for a dribble. When the likes of Šeško kept moving into spaces behind the defence, they dragged the defender deeper – so it was easier to create isolations and spaces for the ball. 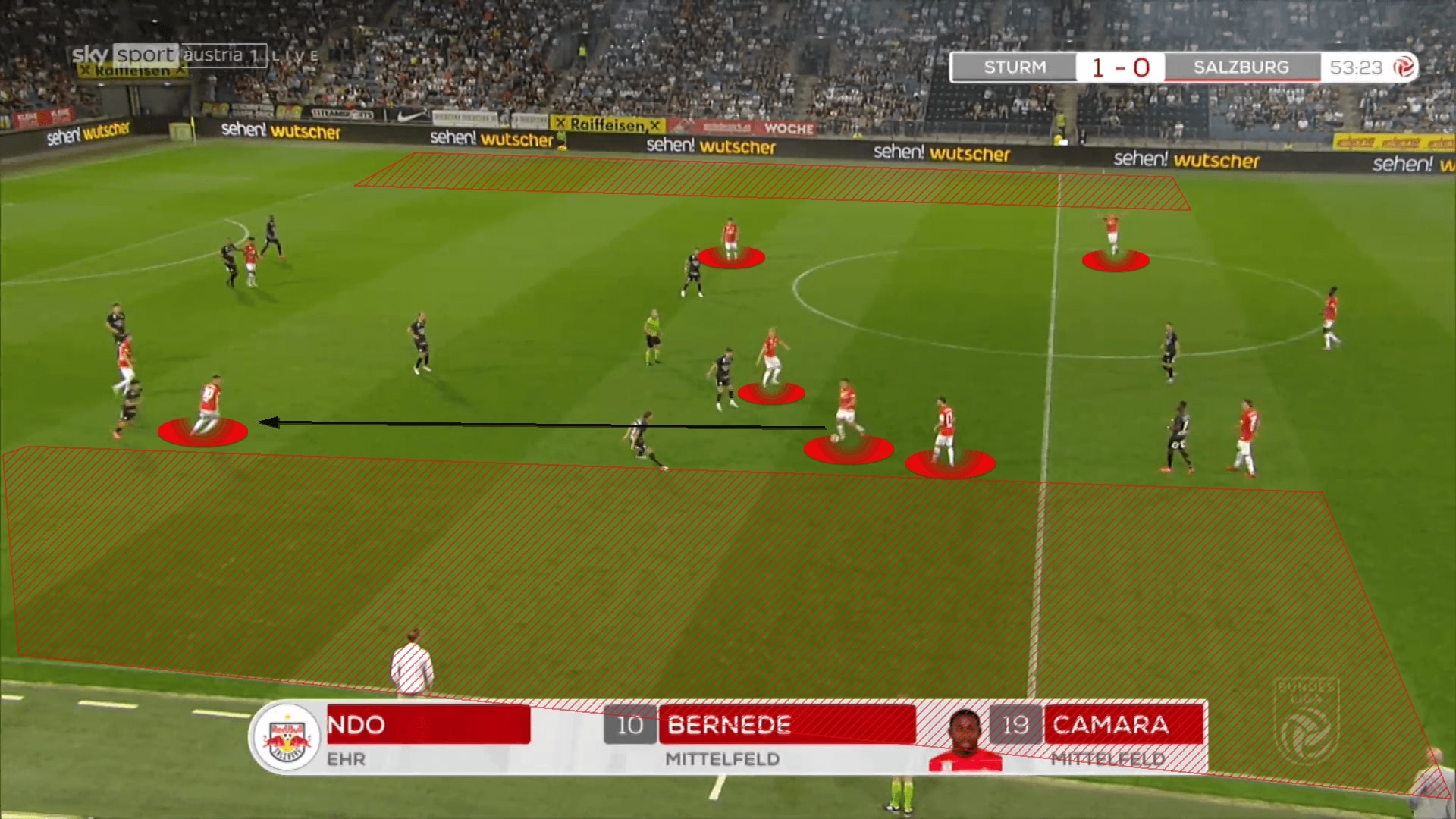 Apart from the offensive transitions, Salzburg also tried to be aggressive in the defensive transitions as they have a structure to counter-press the opponents. Jaissle played three midfielders and a pair of deep and narrow full-backs in this game, so they congested the midfield area and there were always players to apply pressure.

Salzburg tried to progress with a vertical pass at here, but Sturm pressed closed body to recover possession. 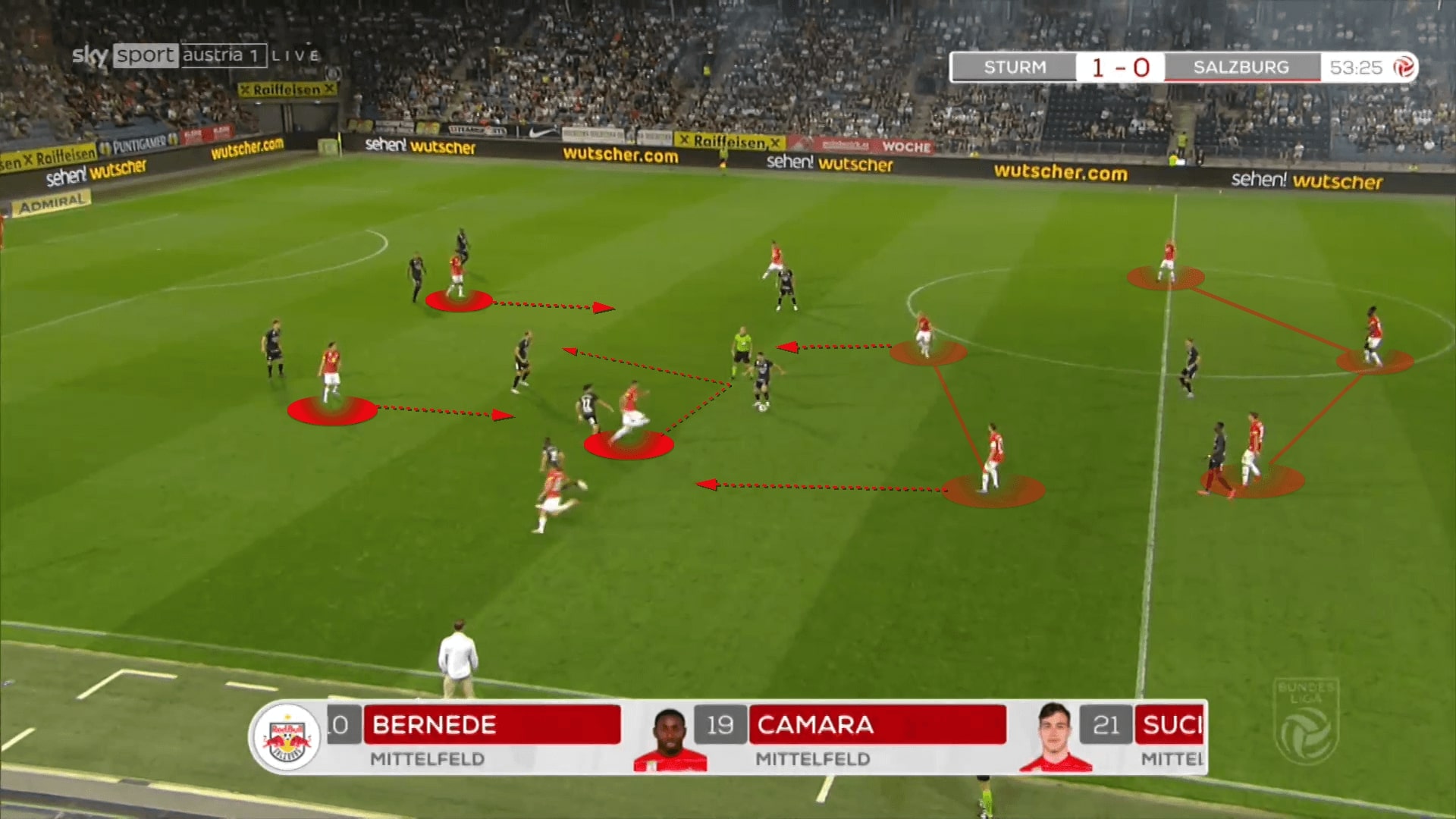 But Salzburg were quite good at controlling the transitions. Here, they had a 3-2 structure with the right-back deep to form a back three. In the midfield, Andreas Ulmer tucked inside to shield the midfield while the initial receiver was immediately counter-pressing the ball. In this situation, Sturm were inside of the net of Salzburg and the guests could counter-press from multiple angles, resulting in another turnover for a counter-counter-attack.

Salzburg’s offensive threat and where to improve

Although Salzburg had a good structure in the transitions to keep the defence being exposed to the counter-attacks, it limited the offensive organization as we saw the team losing possession too often in this game. In the build-up, Sturm could press the Salzburg players at the centre man-to-man as the 4-3-1-2 structure could transform into a 4-1-3-2 to match the shape of oppositions. Jassile’s men simply opened the shape without many positional rotations to drop the high attackers in this shape.

The critical point of progression would be the deep right-back: Rasmus Kristensen to free himself on the flank. Since Sturm’s formation did not have any wingers, they must pull the wide midfielders from the centre to press Kristensen but the distance to run was too large. That might be a reason which Strum were not pressing high in this game – their PPDA: 9.75 was higher than last season’s average (7.84).

In this screenshot, you could see Andreas Kuen must sprint at full speed to access Kristensen. The former Ajax player’s body angle was suboptimal at here and it hindered his next action. 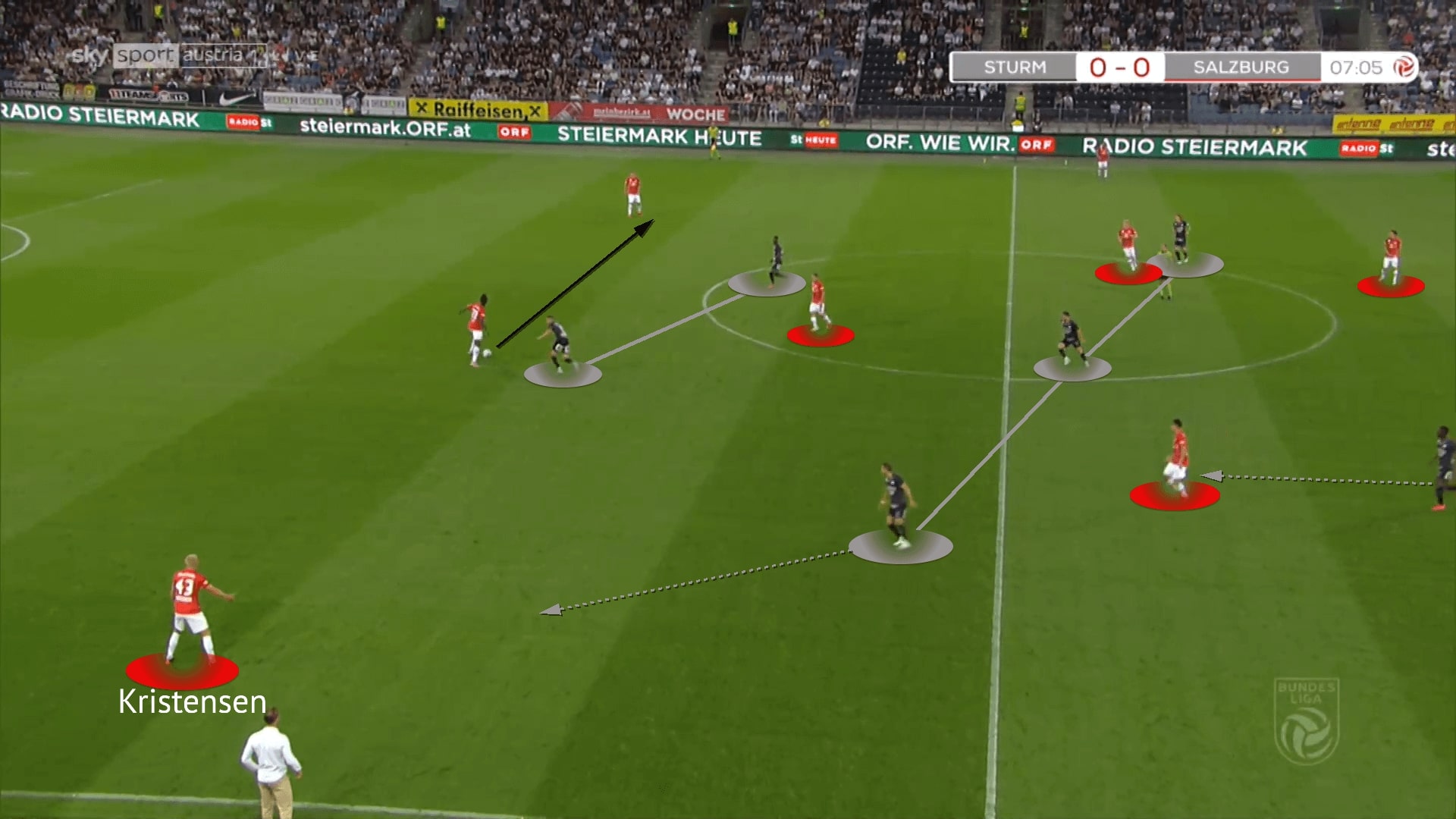 In the second phase, we could see the same setups from both sides through this image. Kristensen dropped deep to form a temporary back three with the centre-backs. At the midfield, Jassile wanted a diamond shape to create a 4v4, so the midfielders rarely dropped to receive. Oumar Solet saw Kuen was ready to press Kristensen in this situation, so he went to the other side even the right-back was asking for the ball.

Strum shifted quite well by using the left-back to cover the left midfielder in the press as you see Amadou Dante moving up to close Capaldo in this image. With the left-back into the midfield, Sturm maintained numerical equality, and Salzburg should go behind the left-back more frequently. 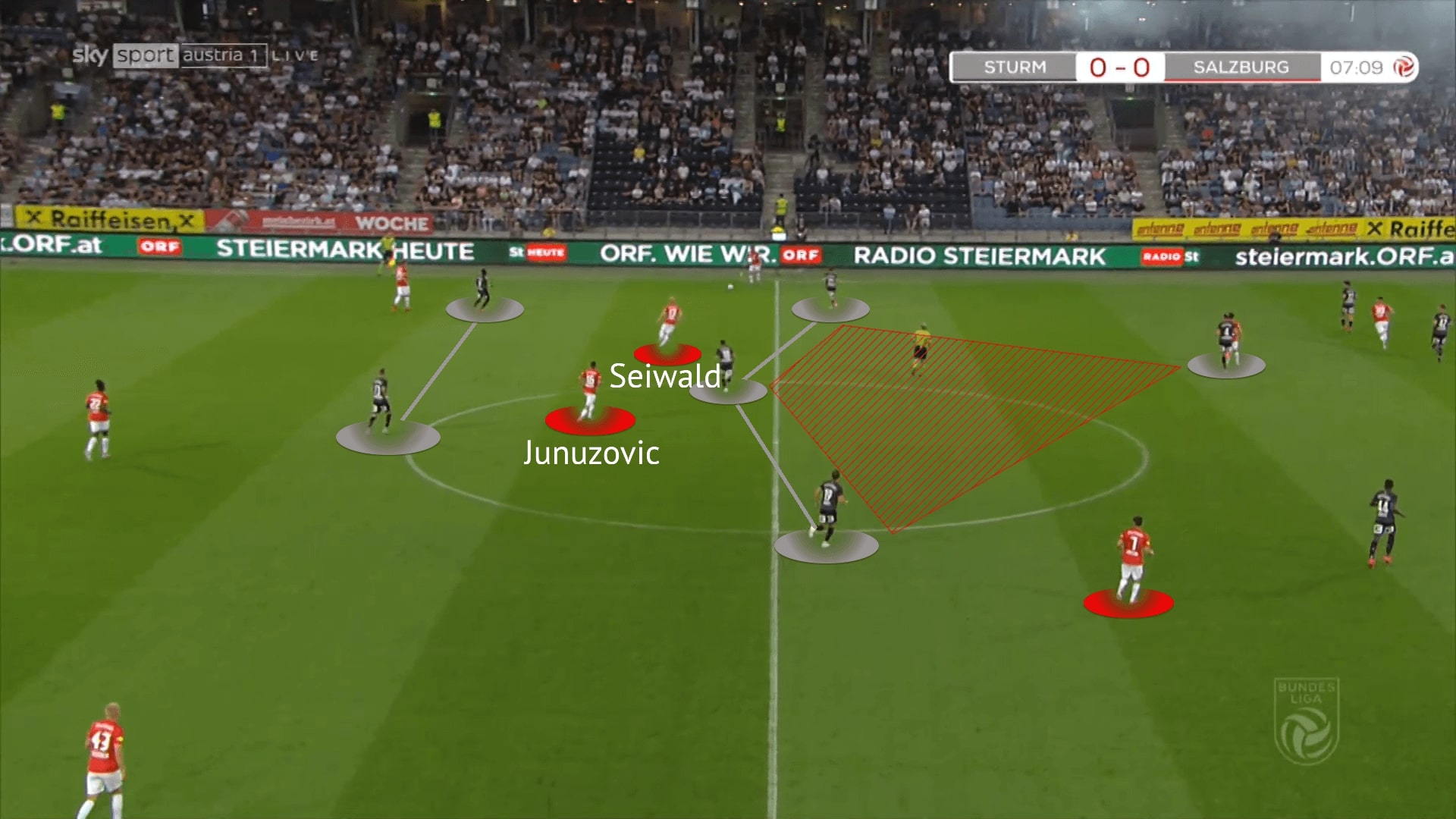 When the attack was developed on the other side, you could see more problems with Salzburg’s structure as they could not progress. Firstly, the midfielders Junuzovic and Seiwald were too deep, no one could support Brenden Aaronson to overload Jon Gorenc-Stankovic. They were missing the occupation of spaces between the lines when the red zone was vacated by midfielders’ positionings.

Ideally, Capaldo should be going inside more often, or Salzburg should be passing through the vacated area to find the strikers directly. However, similar to a previous example, the full-back Ulmer was receiving on his backfoot again, the body orientations of the full-backs would be an area which Jassile looked to improve. 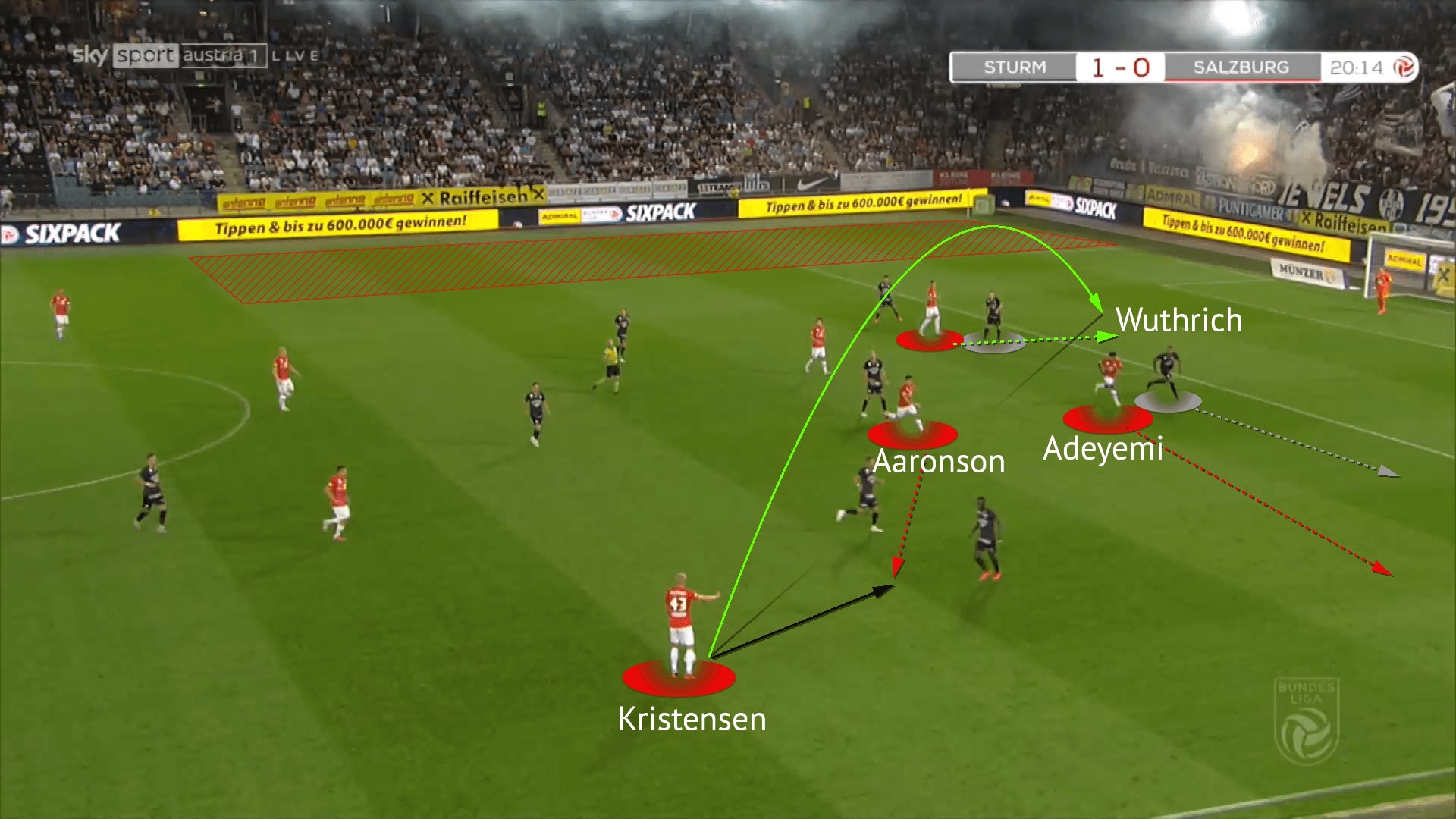 Closer to the final third, Salzburg were missing the deadly through balls to release the 1v1 abilities of attackers as they did in the last season. They want to go between the lines too often, but the structure was not supporting quick combinations and short passes.

At here, Kristensen had the ball once again because of his free role we have explained in the above analysis, but Salzburg lacked the provision of widths for the whole night, and they could not hit into flanks and cross from bylines with one-touch passes. Adeyemi was drifting outside to offer a wide option, but his movement was too lateral. He did not get behind the defensive line, but he drew the centre-back, Gregory Wüthrich, away from his partner. In this case, Salzburg could have been more direct to find the remaining striker directly through the green routes. Nevertheless, Šeško rarely timed his movement to seize this momentum in according to Adeyemi’s moves, he stayed in position in this situation.

Without creating an option behind the lines, Kristensen just played the ball into Aaronson who dropped to receive at feet. It was a suboptimal decision as the receiver was poorly oriented and the team was lacking the third-man on most occasions. They were netted by Sturm. 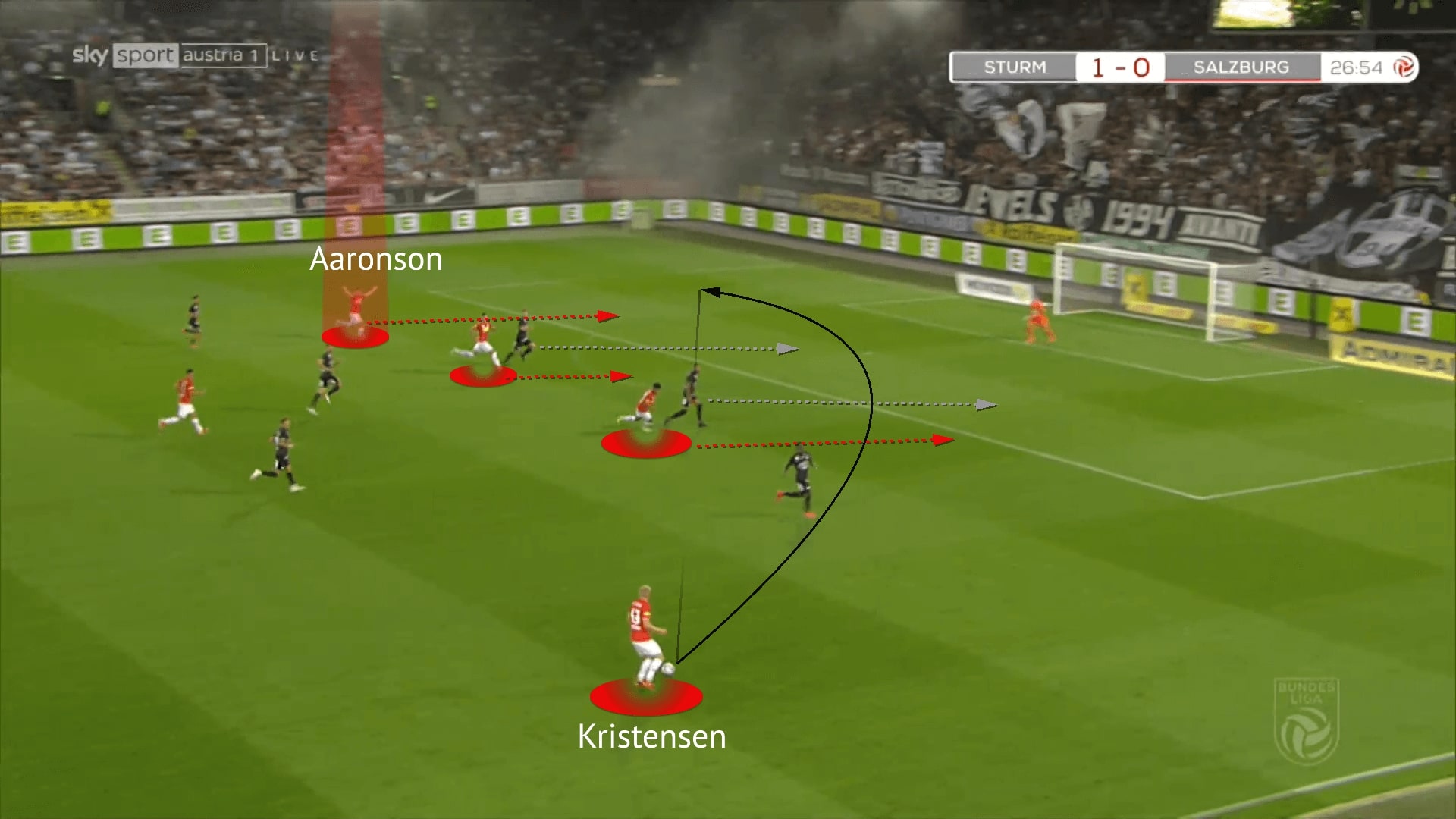 This was a much better example than the previous one.

Again, Kristensen could play freely in the opposition’s half when he evaded Kuen in the construction of the attack. You could see the impact of front players making the forward runs simultaneously – the two strikers kept the two centre-backs busy and freeing up spaces for Aaronson to meet the cross on the far side. Salzburg’s finishing was lacking in this game but if they were direct, there were opportunities. 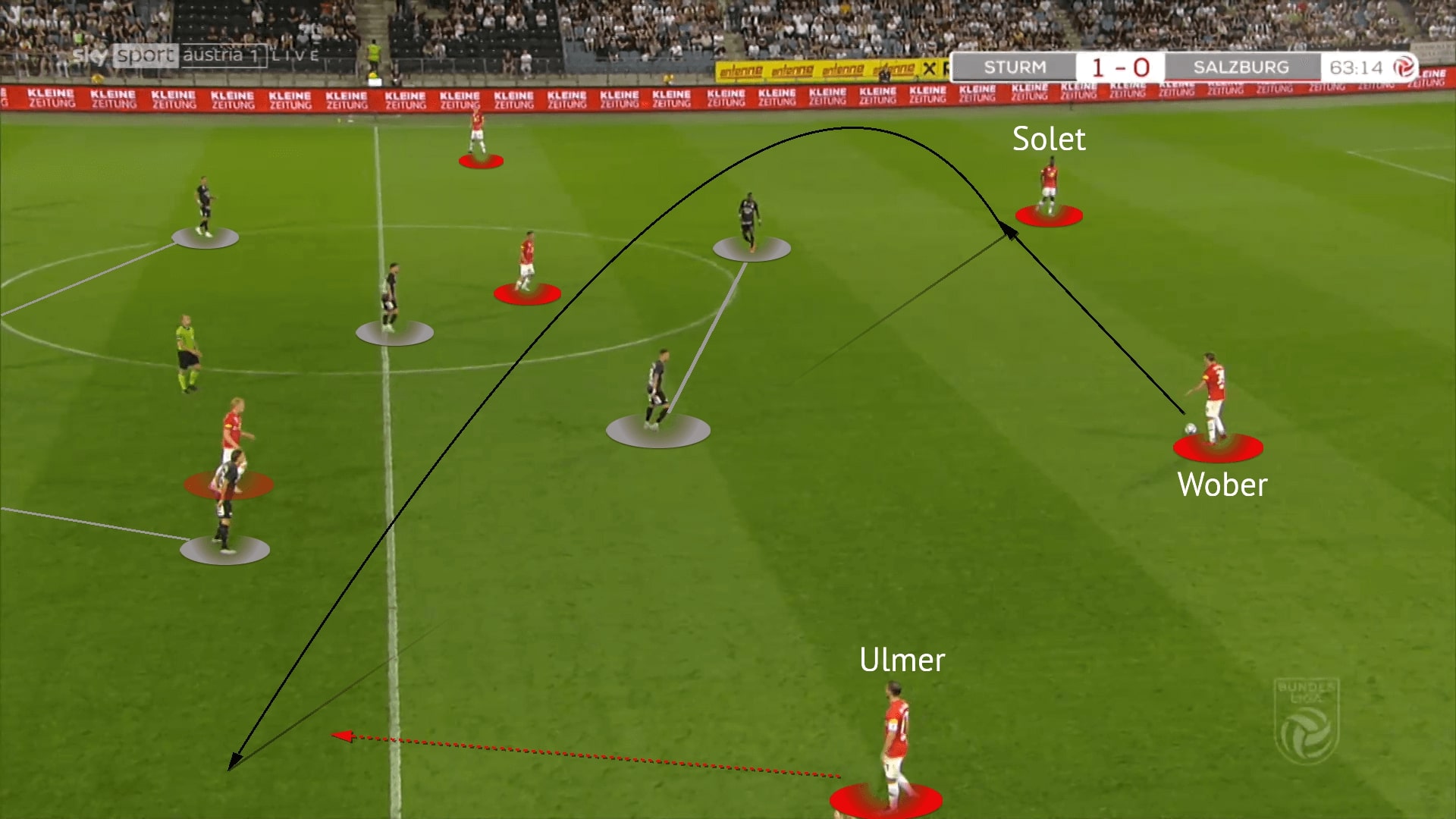 In the second half, Salzburg were fresher with earlier runs and better use of spaces between the lines. They also had some luck in the equalizer, as Adeyemi might be unintentionally chested the ball into the net.

Here, we see a good move in the second phase by full-backs staying in deep. Initially, Maximilian Wöber was telling Ulmer to go higher as the oppositions saw him, he could not pass to the captain. Then, Wöber did a smart move that Salzburg clearly practiced a lot in the training sessions – using the centre-back to invite pressure to one side, then, hitting the ball back to the other flank as we indicated in black arrows.

By using the former Lyon defender Solet to attract the strikers, and using the left midfielder Seiwald to occupy Stefan Hierländer, Ulmer became the free player as Sturm’s right-back was deep. You could see the Austrian international was free on the ball in the next image. 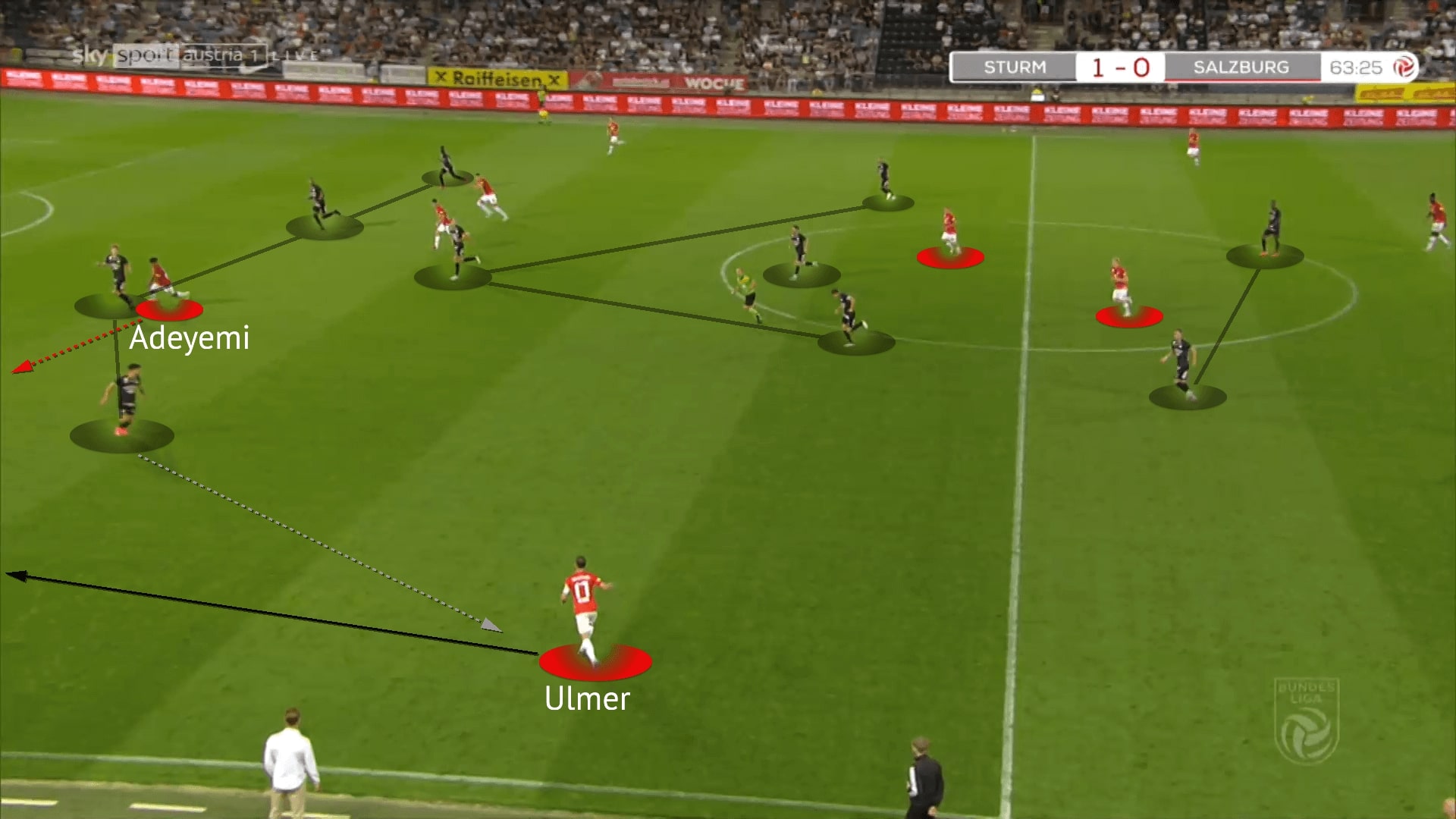 Ulmer then could play down the flanks to Adeyemi, who made earlier movements to spaces behind the right-back. Salzburg could quickly advance into the opposition half. However, the midfielders were still too deep in the construction of the attack so actually, Ulmer was out of options at the centre.

It was not a bad performance from Salzburg as it was not easy to come back from behind away from home. In addition, creating 2.44 xG from 21 shots was good, but certainly, there were more tactics to see from this young side.  Apart from Solet, Adeyemi was another eye-catching individual, his attacking plays have been a real threat in this game, but he must be more clinical to take a larger step in his career. Kristensen made some sacrifices for his role under the new coach, but he was not fully adapted so we should expect to see more from him in the future too.