Mikel Arteta’s job as Arsenal manager isn’t very secure at the moment with the team having tons of squad problems and struggling to find balance – plus the small matter of how to achieve their first victory in Premier League. The Gunners’ two defeats against Brentford FC and Chelsea in the first two rounds set the record straight: despite spending the most out of all clubs during the summer transfer window, the team struggles are nowhere near disappearing.

Even neutral football fans have criticised the way Arsenal have played at the start of the season and have confirmed that their playing style is unpleasant to watch and is inefficient. While they got their first win of the season against West Bromwich in the Carabao Cup, with Pierre-Emerick Aubameyang and Alexandre Lacazette back in action, it wasn’t enough to convince the critics that the Londoners are going to transfer this performance to the EPL.

The team are struggling with the lack of squad depth in certain positions with players being injured and having tested positive for COVID. A few defenders are out of action, while another one Kieran Tierney is doubtful as he picked up an injury against Chelsea. This makes Arsenal’s problems run even deeper.

Their next opponent Manchester City haven’t started the season exactly as they wanted, losing one-nil to Tottenham in the first round. The Citizens raced back on track in their next game and achieved a 5-0 victory over Norwich City with their new record signing Jack Grealish scoring his first goal for the team and proving why he was worth the 100M.

In this preview, we will use tactical analysis to find out what the teams’ tactics could be in aim to expose each other and get the three points.

Have Arsenal’s defence any chance against City’s deadly attack?

Despite the absence of their key men in attack, the Londonders’ biggest struggles at the start of the season have been defensive. They have failed to perform well in different areas, conceding four goals in two games and scoring none.

The team’s central defence was easily disrupted by both teams. The team’s inadequate marking and their failure in 1vs1 situation caused them a lot of trouble, especially against Chelsea’s new signing Romelu Lukaku. Pablo Mari and Rob Holding absolutely failed in covering the ex-Inter player which allowed him to play with the received balls which the Arsenal midfield let slip in on multiple occasions. The support from midfield in these situations was absent and the whole team’s defensive positioning lacked structure. 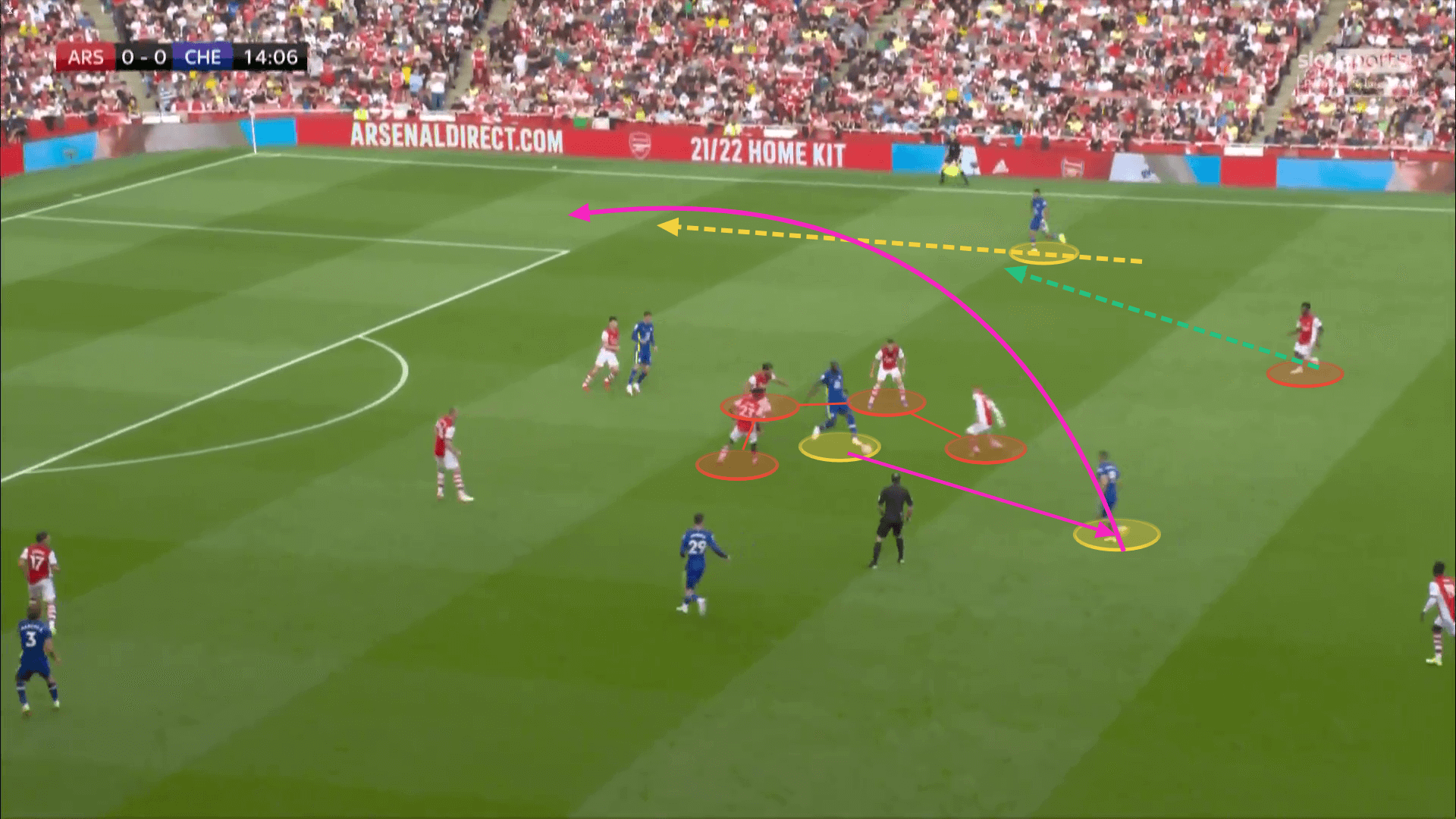 Then four Arsenal players failed to cover Lukaku and allowed a back pass which resulted in spreading out wide to the completely uncovered flank. Very poor marking by Arsenal.Players were easily dragged out of position and there was no one to cover depth. It was a completely disjointed performance. Struggling with picking a decent right-back option in the absence of Héctor Bellerín and heavily relying on Tierney on the left has left Arsenal completely vulnerable on the flanks. They allowed Chelsea to cross the ball 17 times, which showed that they were equally helpless both centrally and out wide. It is expected that they will have the same problems against City who involve many players in attack and rely on short passing, creativity and smart off the ball movement.

City could easily exploit the half-spaces with their movement as Arsenal’s making strategy is often chaotic and ineffective, which allows their opponents to drag them out of position and create gaps rather often. With the team’s crossing efforts and full-backs that join the attack giving freedom to the wingers, it will be difficult for the Gunners to counteract to City’s attacking efforts.

Arsenal’s fragility when defending set-pieces is still present and their inadequate marking in the box was demonstrated in the situation for Brentford’s second goal. The Londoners’ lack of good positioning and awareness cost them a lot in these cases and the lack of strong aerial presence makes them even more vulnerable.

Pep Guardiola’s side will definitely try to take advantage of that weakness. They have some distinguished set-piece takers and won’t miss on the opportunity to threaten Arsenal’s goal through them. With Grealish’s ability to win fouls for his team, it will be no surprise if the defenders’ unmeasured actions result in giving away dangerous opportunities.

The Gunners’ press is also often inefficient. They fail in blocking the passing lanes and troubling the opposition’s build-up which often forces them in hasty clearances and recoveries. While they have recovered the ball quite frequently in their first three games, it was rarely their positioning that resulted in them. Even if it was, it almost never came from the frontline or the midfield.

All these issues make Arsenal’s task of keeping City away from their goal very difficult. In order to counteract to City’s movement and attacking approach, the Londoners need to make a few improvements that could save them the headache.

Firstly, their marking strategy needs to be neat against City’s creative players. The Gunners could simply improve by applying man-to-man marking and increasing their positional awareness, especially in midfield. While the man-to-man coverage makes it easier for the opposition to drag players out of position it could help the team in intercepting the ball and improving their anticipation skills. It will allow them to block the ball more frequently and intercept dangerous passes.

Of course, this one should go together with an improved pressing strategy. Having in mind that currently, in the absence of many players, Arsenal’s most vulnerable area is their defence, they need to apply press with their first two lines of defence and try to keep the opposition away from their defensive third. Pressing high hasn’t always worked for Arteta’s side but putting efforts into disturbing the defenders in the build-up process can definitely help at least for decreasing the tempo and having more control.

This expectedly could result in being even more exposed in cases of quick attacks,  but this is a risk that should be taken, as Arsenal are about to suffer way more if they invite the play in their own half. They cannot sustain pressure and it will be only a matter of time for the Citizens to breakthrough.

City indeed have players with great spatial awareness that could bypass Arsenal’s press, but in this case, even tiring them could be beneficial for the Gunners.

Do City have defensive weaknesses that Arsenal could exploit?

While City’s defensive improvement and the defenders’ actions in possession were key in their road to the 2020/21 title, the Citizens do have some weaknesses that could be exploited if Arsenal take advantage of their opportunities. While last season, Guardiola’s side were rather solid in their defensive transitions, this year a tendency of being exposed on a counter appears. That’s how Spurs exposed them on multiple occasions. Since it was very difficult to break through City’s press and attack methodically, Tottenham focused their actions on counter-attacking, which resulted in 13 counters with eight of them finishing with shots. This caught City off-guard and they often couldn’t react quickly enough to these invasions. 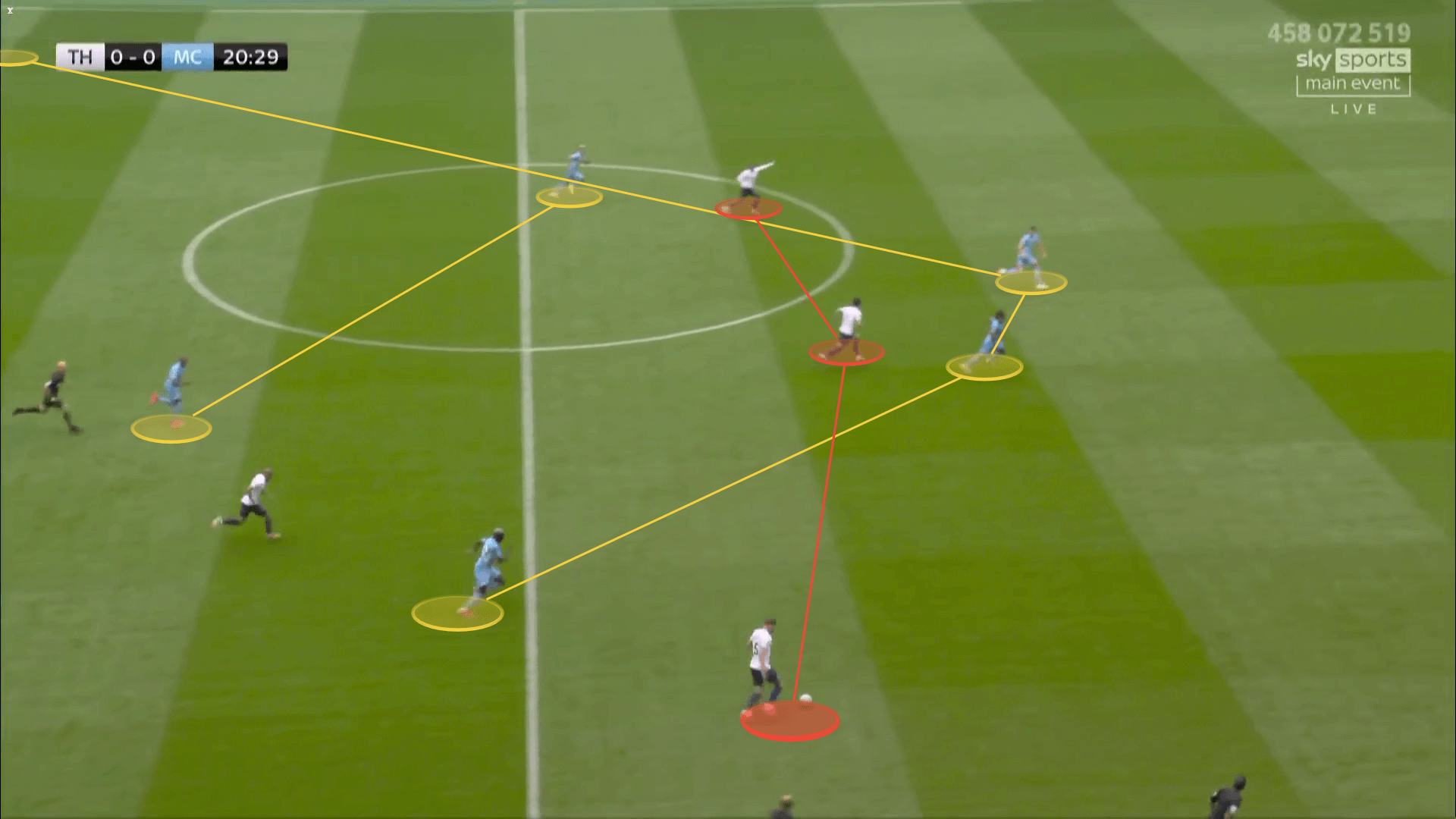 This resulted in Spurs creating a 3vs2 advantage and exposing the freed-up spaces by City’s full-backs who were out of position and caught off guard.While last season City were allowing 2.54 counter-attacks per 90 in all competitions, now that number has increased to 4.33. This does include their pre-season friendlies, but actually, the majority of counters they have conceded have happened in-season.

While Arsenal’s strategy doesn’t often involve counterattacking, this could be an efficient way to expose City, especially having in mind the lack of strong ball-playing defenders who could help them in building up from the back efficiently. Catching the opposition on a counter could be their only way to create chances. The team do have pacey players in the face of Nuno Tavares, Emile Smith-Rowe and Aubameyang so it might be a good idea to use them whenever an opportunity arises.

The good news is that Arsenal can rely on Smith-Rowe and Martin Ødegaard in attack as both players could be key in creating opportunities and breaking through City’s press. While the team’s lines look disjointed now, the presence of Lokonga in midfield brought more versatility in actions in possession and his partnership with Granit Xhaka could improve the connection between the lines and bring more balance as time goes by.

As our analysis shows, Arsenal have very few chances to surprise Manchester City. With the absence of some players and the poor performance of others, the Gunners will be struggling against City’s intensive attacking football. While the Citizens do have some vulnerabilities, Arteta’s side will need to show high concentration and improved defensive awareness to be able to stop the opposition and take advantage of their chances. Their 6-0 win in Carabao Cup was great for boosting their confidence but it shouldn’t be taken as a sign of improvement as the Londoners have a long way to go to get rid of their issues.

WEURO 2022 preview: What could be expected tactically from the Netherlands vs Sweden clash? – tactical analysis

England and Norway started their UEFA Women’s EURO 2022 successfully after wins over Austria and Northern Ireland, while the rest […]