Besides the goalless draws, this week’s round of Champions League second legs hosted a game with plenty of drama, even though Schalke’s defeat to Pep Guardiola’s Manchester City was an anticipated result. There was drama indeed, at least in terms of penalties, VAR decision, a red card and changes in the lead throughout the game.

Manchester City had a much more difficult task against Schalke than they expected. Although they took the lead, the German side were ahead at half time. Fortunately, the English champions were able to change the game with two late goals and ended up with a 3-2 win. There are plenty of talking points, but this tactical analysis will be focusing on Manchester City’s perspective.

There were no surprises in the starting XI since Pep Guardiola put full strength on the pitch. He also deployed the usual 4-3-3 formation as Fernandinho paired up with Nicolas Otamendi in central defence due to the injury of John Stones. Another centre-back, Aymeric Laporte, replaced Mendy in the left full-back position.

Ilkay Gündigan took the lone pivot role in midfield behind two creators, Kevin de Bruyne and David Silva. Both featured as a eights in a fluid and flexible style, thus all of them had the licence to position themselves close to the ball to give a passing option. For example, De Bruyne often moved outwards to the right wing. 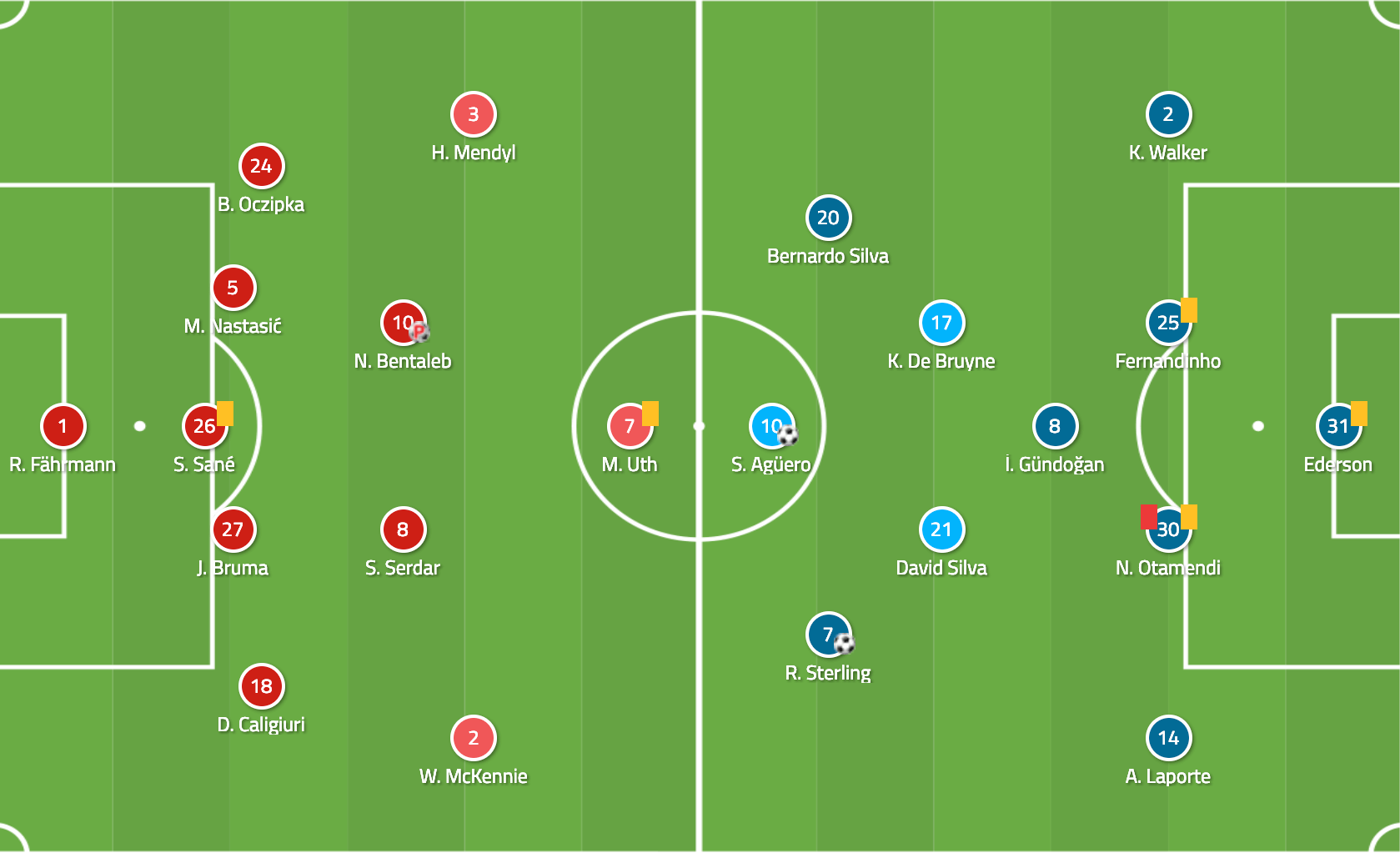 Manchester City have had an eventful season so far. They currently lead the Premier League level on points with the team in second place, although Liverpool have played fewer games than them. Also, despite having an impressively strong squad they have some issues right now due to some painful injuries.

One of their interesting aspects against Schalke was their possession play. In addition, the visitors dominated the game from the beginning since they took control early on. This is anticipated of such a side as Manchester City who favour a possession-based style.

Therefore, their opponents prepared for this clash by not trying to press high. Instead they aimed to deny City’s central progression with a quite defensive formation. Thus it is a logical step to take a closer look at how City built from their back line, what movements occurred and how City attempted to bypass Schalke’s defensive block.

As I mentioned earlier City’s base formation was 4-3-3, and it seemed that Schalke deployed a 5-3-2 shape to create a numerically equal situation at the centre in order to compete with the visitors’ three-man midfield.

It situationally changed who joined alongside Mark Uth to form the first line of press. However, they maintained this central-focused setup rather than actually pressing. Their goal was to block the passes towards De Bruyne and David Silva, therefore limiting their actions on the ball, although one thing always triggered the press.

When City’s centre-backs tried to advance a bit on the ball, it instantly triggered the opponent’s pressing movement. For example, when Fernandinho advanced on the ball, Nabil Bentaleb always pushed forward to press him. This image below highlights how Schalke protected the centre and covered all the passing options to make it difficult for Manchester City to build an attack.

When the ball moved out to the flanks Schalke adjusted and congested the wide areas to deny City’s breakthrough. 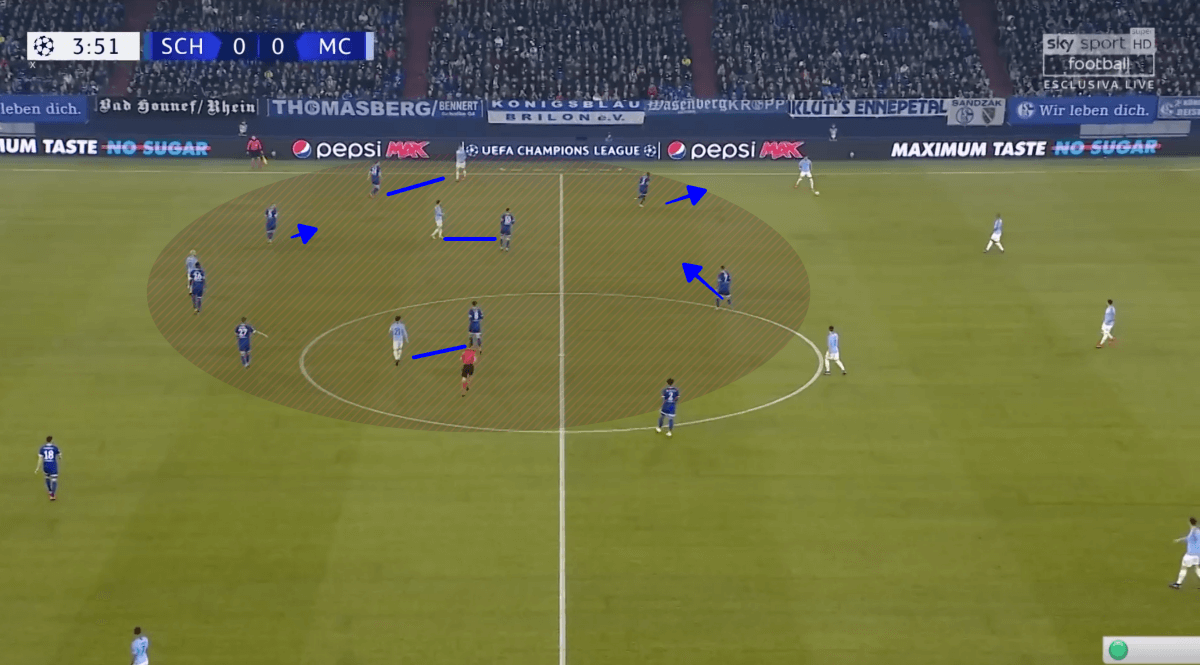 A pattern in the build-up

A pattern emerged in the game. Guardiola tasked Fernandinho to always push forward after the first one or two passes.

Instead of pushing forward, the full-backs stayed deep and narrow. City thus operated with three men at the back, and therefore formed a 3-2-2-3 shape on the ball. These two images highlight the formation during possession phases.

This movement from Fernandinho became less frequent halfway through the opening period. In part this was due to Schalke moving a bit deeper, or at least forming a 5-4-1 shape rather than the starting 5-3-2 formation which had allowed City to maintain a four-man back line more often.

As I described earlier, Guardiola’s man faced Schalke’s 5-3-2 where the front two lines protected the central zone. This caused trouble for City to bypass and reach the attacking third.

In the first few minutes, De Bruyne offered an outlet from Schalke’s press and a way to progress up on the pitch. He often moved to the right half-space or even the wing to provide an open man and receive the ball.

Furthermore, the second solution for outplaying Schalke’s middle block came from another dropping movement. This time Bernardo Silva offered himself. Below are two examples of his contribution to play the ball forward. In the first diagram, he moves deep to receive the ball from Walker then cut inside to play the ball to Fernandinho. This opens up the passing channel towards David Silva. 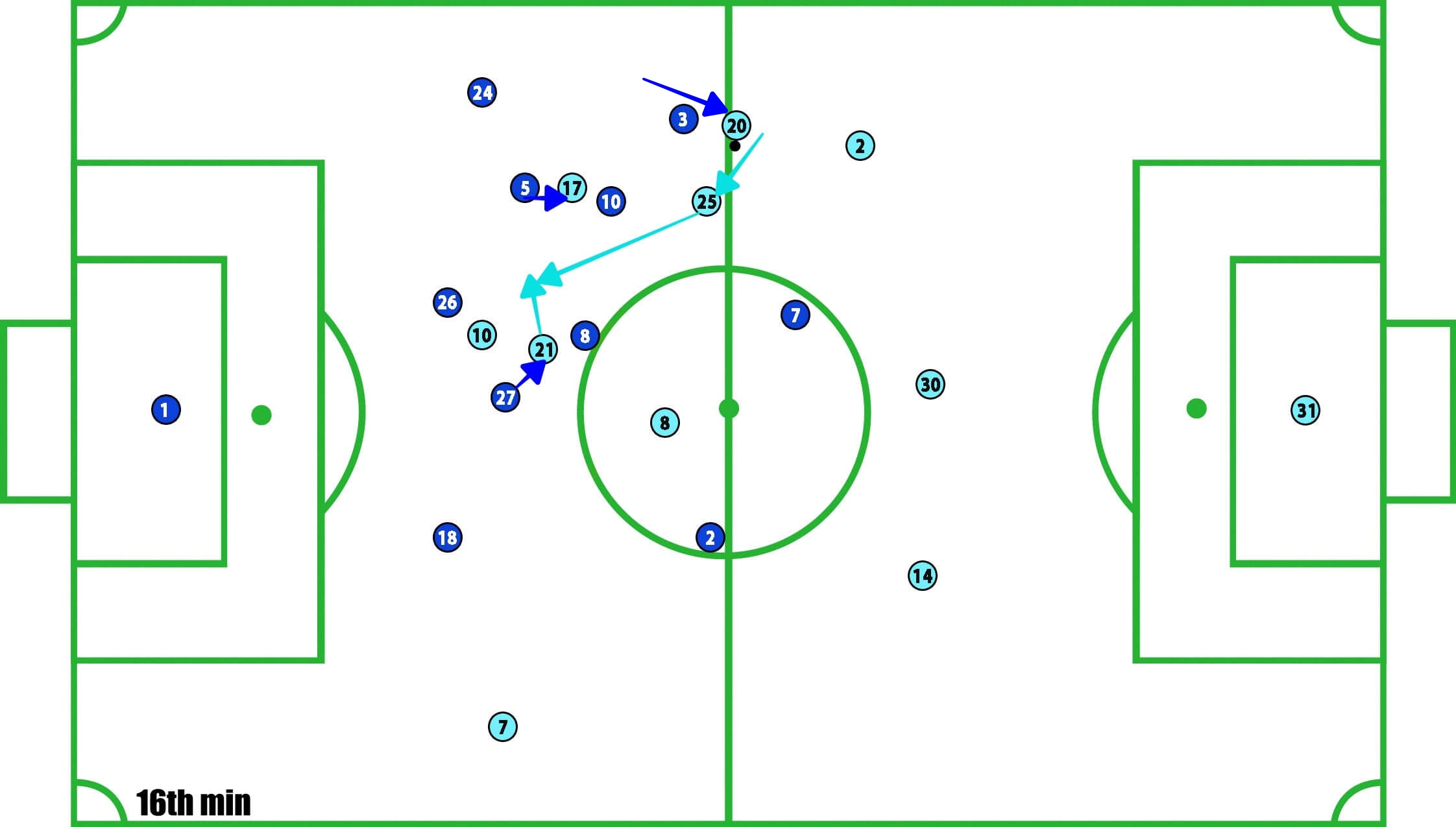 A few minutes later he drops again, but this time he stays on the right wing and performs a quick combination with David Silva in behind Schalke’s second line. The key was pulling out Bentaleb. In reaction to this Schalke’s second line became narrower to protect the space, which created more room for Bernardo Silva on the wing.

Pulling out a player from Schalke’s second line seemed like a good recipe because City used this tool on other occasions, like a minute later. You can see from the image below that Serdar moves out to press Gündogan which opens up the route towards De Bruyne. This is a pattern in City players’ behaviour that after a player receives a pass they seek a teammate to make a combination. This was evident in Bernardo Silva, De Bruyne and David Silva’s play. 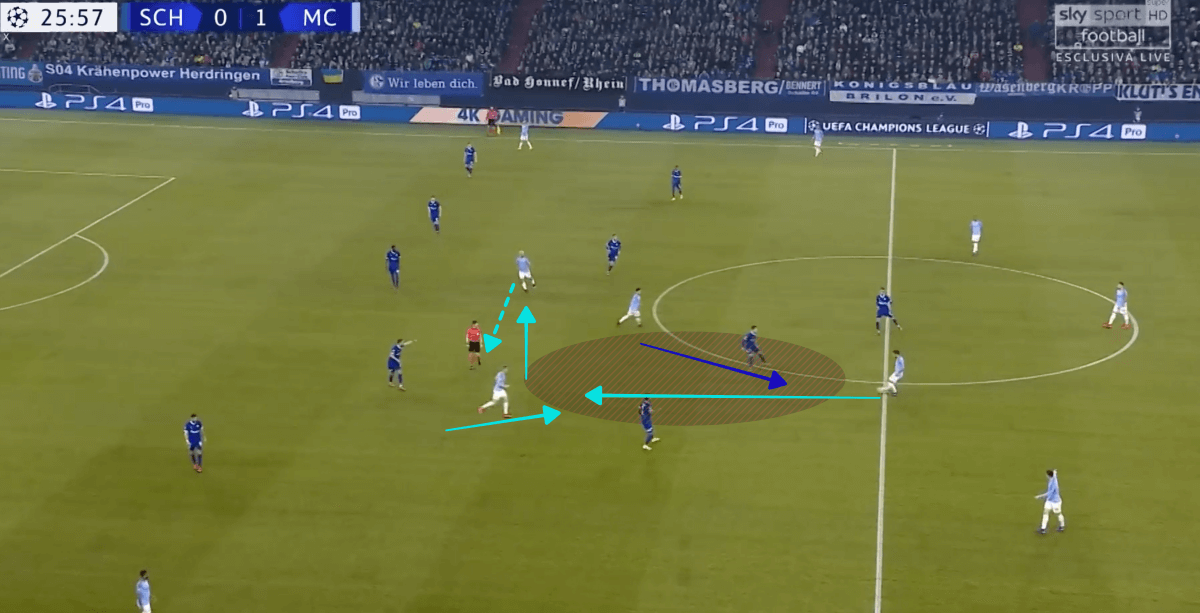 Of course, the biggest modification in City’s system occurred right after Otamendi was given his second yellow card. Guardiola introduced Vincent Kompany to the game for David Silva. Thus Fernandinho, Kompany, and Laporte formed the back line in possession and De Bruyne frequently dropped deeper besides Gündogan to help play the ball forward. 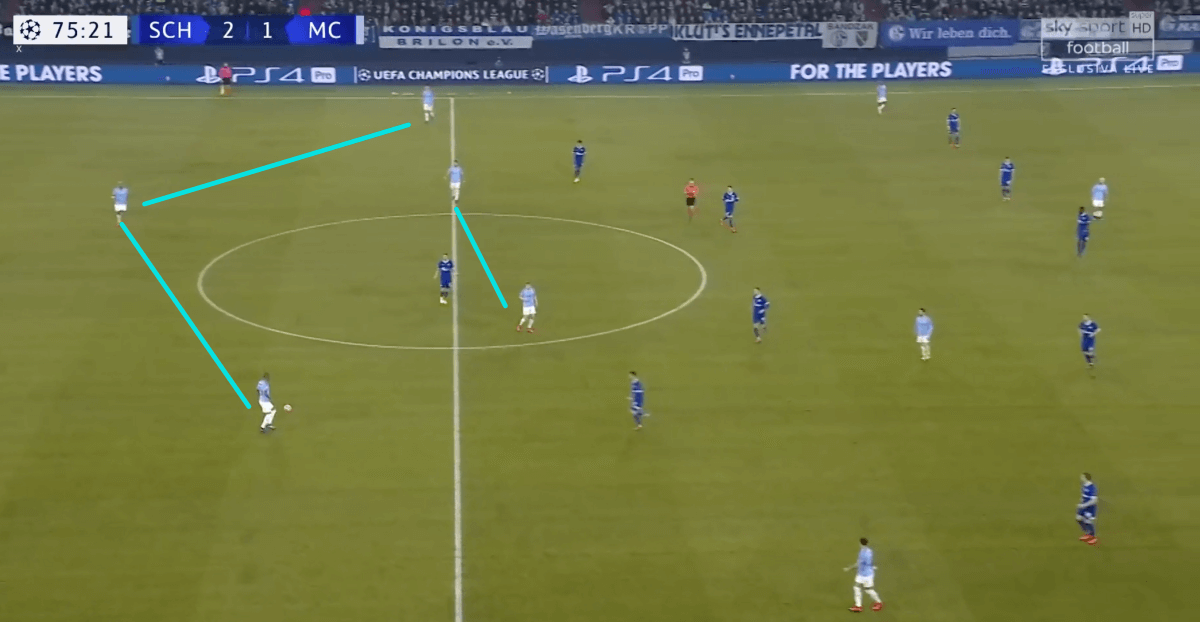 In defence, the formation transformed into a 4-4-1 with Sterling (later Leroy Sane) and Bernardo Silva dropping into the midfield line.

Overall, Manchester City had a strong performance as they had some really interesting patterns in possession play and in attack. However, they struggled a bit to create scoring chances, and despite the three goals, they failed to take advantage of the promising situations. 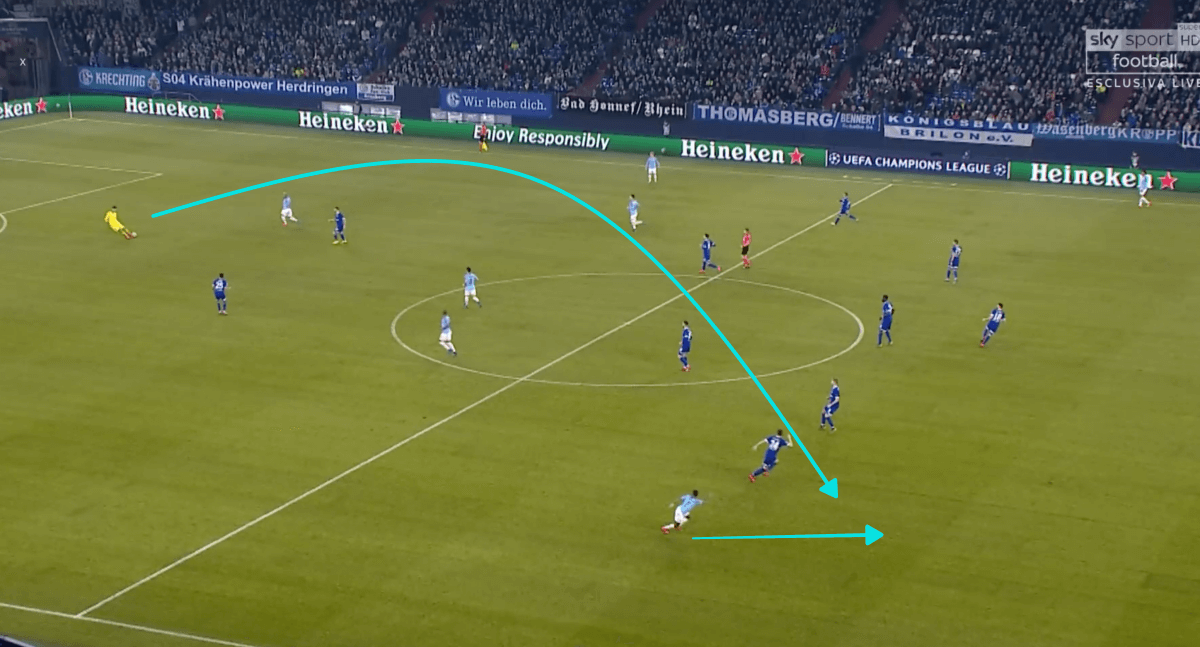 Moreover, individual quality shone through in this match since some City players saved this tie for them. For example, Leroy Sane’s goal and Sterling’s winner came from pure individual achievement.