How did Juventus fall into their own trap against Atletico?

Atletico Madrid won the first leg of their Champions League clash against Juventus 2-0 showing great potential to be one of the finalists this season. The Italian team couldn’t react properly to what is usually their strength – outstanding defensive actions – and failed to provide the expected performance.

Being defensively outplayed is not something common for the Serie A champions, but up against Atleti they should’ve been better prepared. As relative underdogs Los Rojiblancos had the perfect plan of mixing their defensive stability with strong build-up play which caused problems in areas that Juve weren’t expecting.

Massimiliano Allegri fell into his own trap as he didn’t have a plan B and continuously pushed the team to the same mistakes as a result of his tactical decisions. On the other side, Diego Simeone looked more than prepared for the clash as his team performed a Champions League masterclass, especially against one of the favourites in Juventus.

Is Bianconeri’s defeat a result of the lack of a real competitor and therefore adequate preparation in Serie A, or did Atletico Madrid just show their true colours and are currently the better team? 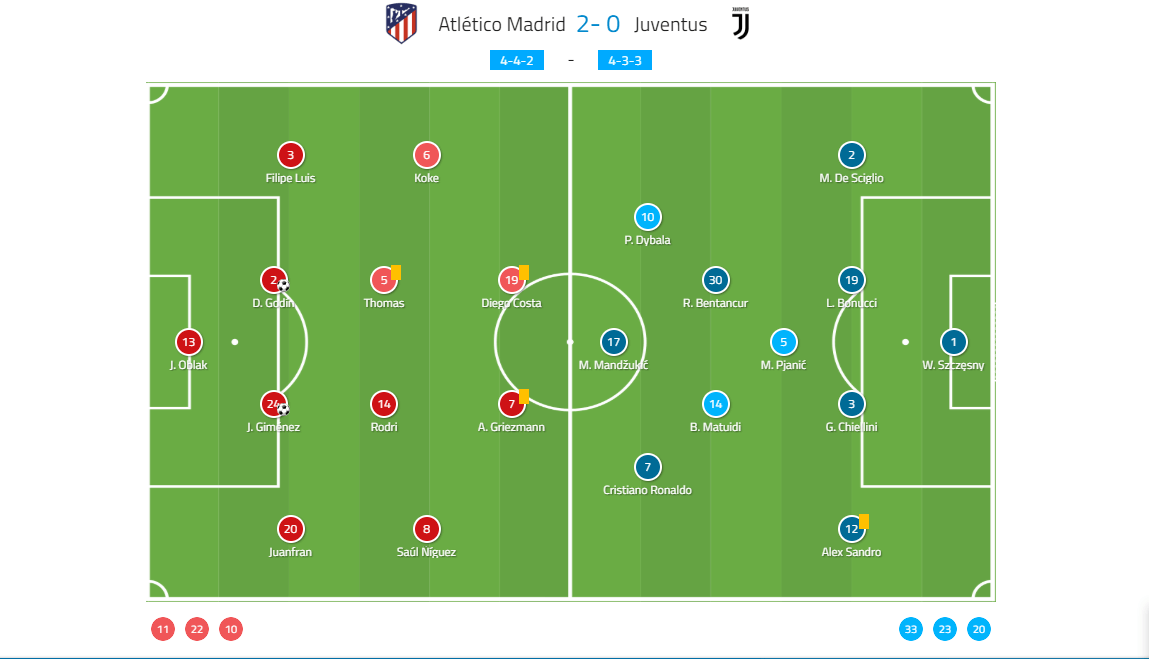 Both teams played in their most common formations. While Allegri sometimes switches between formations Atletico followed their 4-4-2 scheme in pursuit of their routine defensive discipline. In front of Jan Oblak, two of the team’s most important players were positioned, Diego Godin and Jose Gimenez.

They both turned out to be the heroes of the night, scoring two goals in five minutes and completely destroying Juventus’ hopes of a clean sheet. The full-backs Juanfran and Felipe Luis would often be found in the opposition’s half when in possession, supporting their teammates. 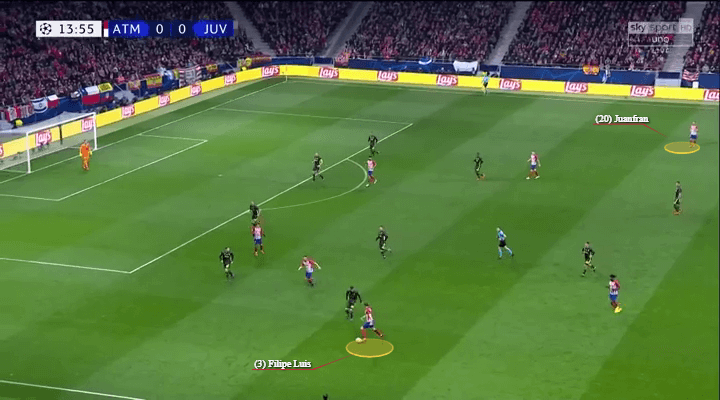 A solid four-man midfield was in charge of maintaining possession and distributing the ball. Diego Costa and Antoine Griezmann were responsible for disturbing I Bianconeri’s famous defence. And they managed to do so, as the Frenchman has 53 touches, more than any other Atleti’s player. Juventus ended up with 727 touches in total, compared to 467 by the Spanish side. But the fact that most of them were split between the back-four, is proof of the sides’ struggles to build-up.

The Serie A champion started in their favoured 4-3-3 formation. In front of Wojciech Szczęsny, the so-called best defensive duo Bonucci and Chiellini failed to provide the needed stability. Mattia De Sciglio and Alex Sandro were responsible for covering the sides. Sandro was the reason for the team being exposed due to his offensive ventures. He had to deal with Atleti’s most active players Juanfran and Griezmann on a few occasion and often failed to do so.

The midfield trio led by Miralem Pjanic sat behind Ronaldo, Mandzukic and Dybala who would often switch positions. The only surprise in Juventus’ lineup was not having Joao Cancelo at right-back, given how he’s been a regular since his arrival.

Defending not enough to win

Bearing in mind Atleti’s high-speed playing style, Juventus’ expectedly were looking to keep possession of the ball for longer periods of time and take time to build up.

The full-backs De Sciglio and Sandro weren’t as adventurous as they could have been and often sat halfway up without having any attacking ventures. This affected Juventus’ build-up play as their options were either using Pjanic for further ball distribution or the attacking players had to drop back and pick up the ball.

Of course not taking risks against Atletico’s front duo seemed reasonable. But that meant the hosts’ full-backs weren’t threatened that much, as no Juventus’ player was positioned wide and deep in the opposition’s half. This resulted in Juanfran and Felipe Luis having plenty of space to get forward without taking that much of a risk.

As per usual Pjanic was responsible for Juve’s build-up play sitting deep whilst Matuidi and Bentancur delivered passes further forward. At least that was the plan. It was ruined by their opponent’s midfield press, blocking all passing lanes effectively enough for Juve’s trio to be stuck around the halfway line.

This forced Ronaldo and Dybala to drop back and rely on their own dribbling skills to distribute the ball in the final third. That resulted in the lack of creativity and opportunities, with only Ronaldo creating an actual threat in the final third. He ended up with 95% passing accuracy sending 38/40 accurate passes to his teammates. He completed more passes than Matuidi and Bentancur.

Every once in a while when the Old Lady tried to actually use the wide areas they found Atletico’s wide midfielders well positioned to put pressure on the ball carrier and force them back into midfield.

As has happened before, Juventus tried to keep the score down by not taking any risks. They tried to stay in their comfort zone by slowing down the passing and using the central areas to keep possession of the ball.

Combined with Atleti’s 4-4-2 block it was impossible for any of the forwards to proceed after receiving a pass. As a part of their pressing plan, the Rojiblancos formed triangles around the man in possession and covered the passing options as well as the way further up the pitch.

Atletico’s press combined with their opponent’s instability forced Juve’s players into some individual mistakes. This allowed the Spaniards to win the ball in the middle of the park, and proceed to more advanced areas.

In the early stages was still difficult for them to pass through Bonucci and Chiellini but they found the solution by playing through the middle and then spreading it out to Costa, who took on De Sciglio. Once the La Liga side gained more confidence they managed to take advantage of the central duo’s smallest mistakes and create two dangerous goalscoring opportunities.

Atleti continued putting pressure on their opponents’ defence, forcing them into mistakes that resulted in two goals. Both came five minutes apart after the central duo of Gimenez and Godin took advantage of their team’s set-piece opportunities.

Right after Juventus went 2-0 down, Allegri decided to make a change and play Joao Cancelo. It turned out to be the right move but not at the right time. The Portuguese brought the necessary alteration with the team eventually switching up to 4-4-2 with him on the wing. With less than 10 minutes left, perhaps this wasn’t enough for the team to score an away goal.

With Atletico’s perfectly calculated tactics and Juventus’ defensive approach to the game, it is no wonder that the Spanish team has this significant advantage going into the second leg. The pressing plan of Simeone’s side worked to perfection in order to block their opponents’ build-up play.

Allegri definitely needs to risk it all in the next game and show more courage in his attacking instructions, otherwise he’ll see his team knocked out of the tournament.