Lyon’s struggles in stalemate against Barcelona

The highly-anticipated clash between Lyon and FC Barcelona produced a goalless draw in which the hosts suffered a lot, with only opposition errors saving them from defeat. As our preview predicted well, Lyon faced difficulties in the absence of Nabil Fekir. However, there were many more issues. This tactical analysis will look into this clash from Lyon’s point of view and focus on why they were weak in this game.

Without Fekir Bruno Genesio lined up his team in a 4-2-3-1 formation, with Memphis Depay in the number 10 space and Martin Terrier introduced in Depay’s position on the left wing. It was hard to see this setup too much since Lyon lacked the possession phases where this shape could form. 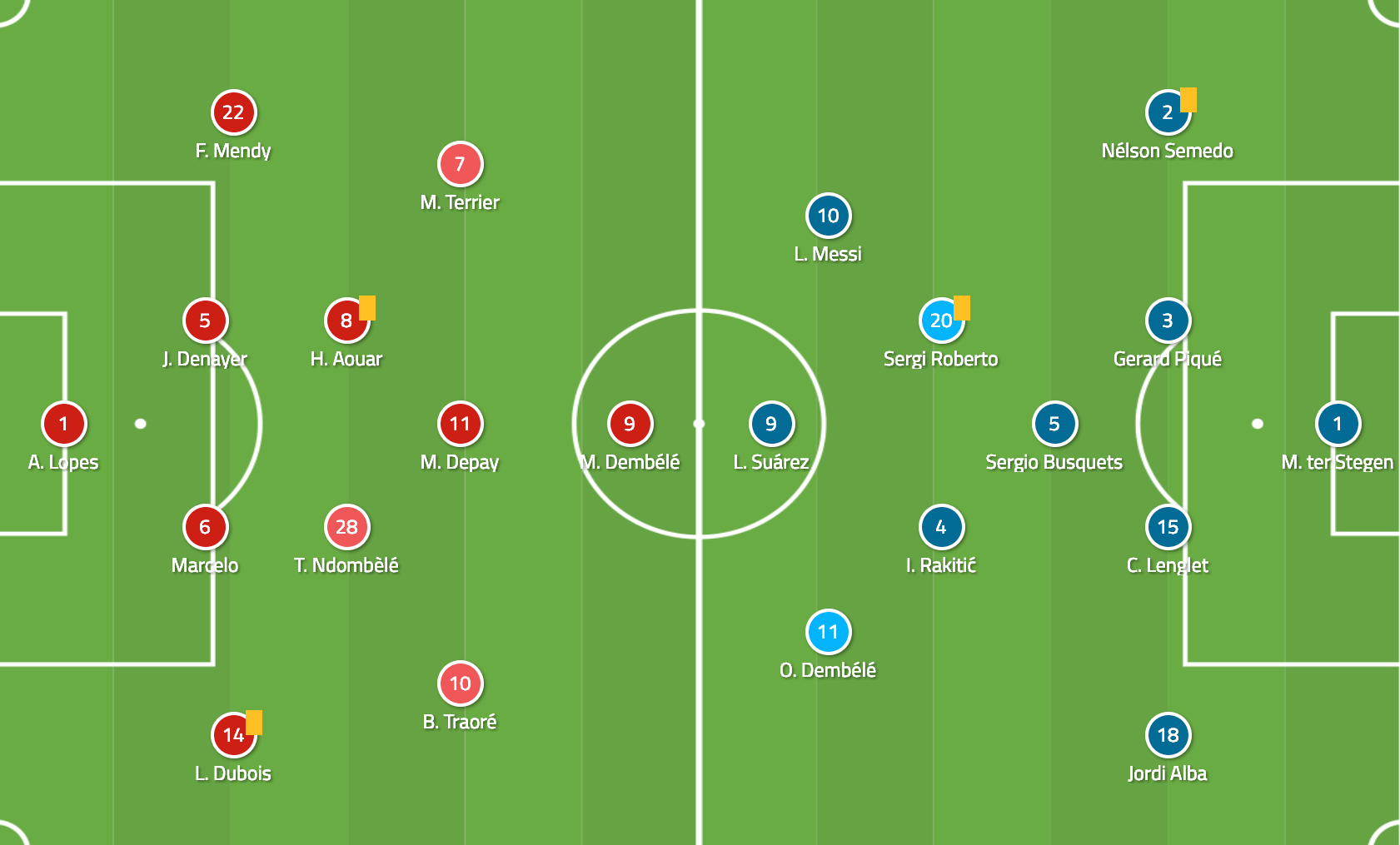 Lyon’s formation transformed into a 4-4-2 in defence which was more evident in this game as they were forced to defend a lot of the time. Therefore, on those fairly rare occasions when Lyon were in possession, they formed a structure that is highlighted below.

The full-backs pushed forwards down the flanks in important attacking roles while the wingers pinned back the respective full-backs to the defensive line as Dembele occupied the centre-backs. In midfield was the usual double pivot of Houssem Aouar and Tanguy Ndombele and in between the lines, Depay. 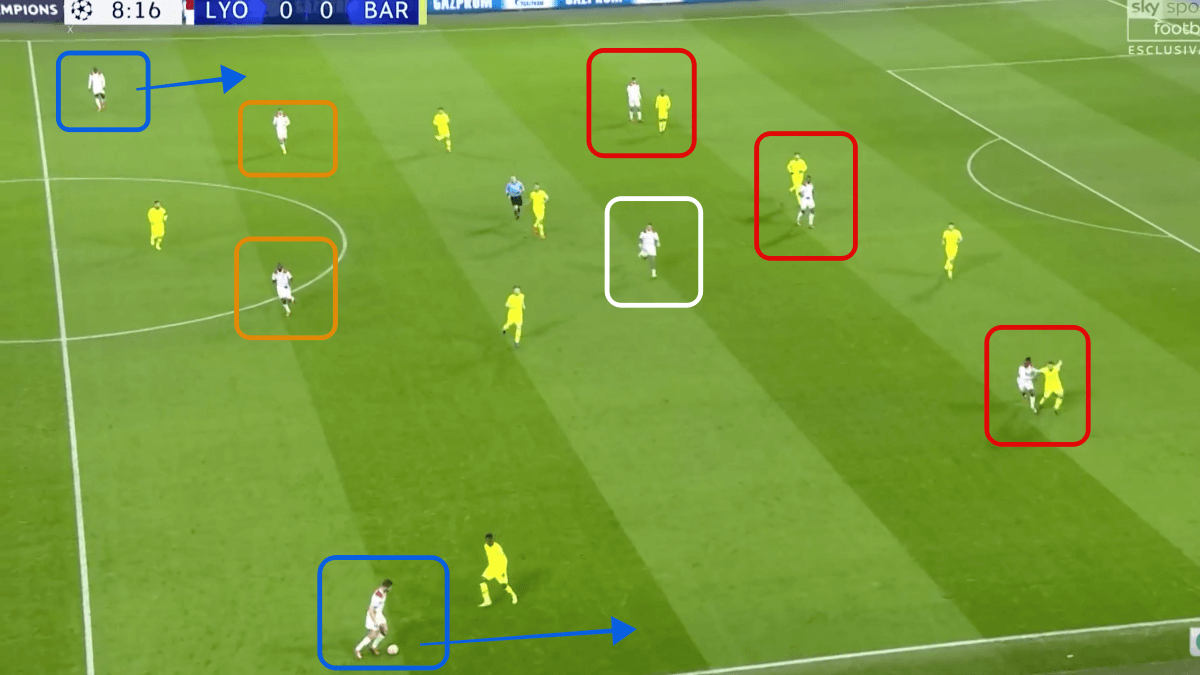 Notice that Depay took Fekir’s role, thus shifted side to side to provide a passing option.

First things first, Lyon started the game well as they created two quite promising situations, although both chances were created from the guests’ errors rather than Lyon’s attacking contribution. However, their issues stood out early on. Barcelona’s pressing caused some difficulties for them after the first 10 minutes, forcing the home side back to their own half as the visitors became the dominant side in possession.

When Lyon tried to progress the ball they had to bypass the opponent’s man-oriented pressing which was a tall order. Barcelona pressed with these six highest players in a 4-4-2 formation which was equal to the Lyon’s participation in the deep build-up. Therefore, Genesio’s side did not have a spare man to beat the press and move the ball forward.

In an initial response to build-up issues, the forward players start to drop deeper to give an outlet from the opposition press. Depay and Terrier for instance dropped deep to help Lyon, but the opponent’s defenders followed them.

Without an adequate way to build up, Lyon really suffered on the ball which caused a lack of attacks. Barcelona meanwhile were able to dominate the possession phase. Because of their inability to deal with the press, Lyon were forced back or to give up the ball, even at goal kick situations. This image highlights an instance where the visitors were compact around the ball which prevented the home side from progressing.

Suarez pressed Denayer, Ndombele was followed by Rakitic, Messi was responsible for Marcelo while Sergi Roberto paid attention to Mendy. Moreover, Ousmane Dembele marked Dubois and Busquets stuck to Aouar. Consequently, the home side lost the ball quickly due to the lack of passing option and Rakitic’s press which forced the ball back to Lopes.

When it comes to defending, Lyon formed a 4-4-2 shape which aimed to hold the centre under control. They formed a compact narrow shape that left the wings open, as you can see in the instance below. Barcelona’s goal was to create as much width as possible, and they always found an open man on the flanks. 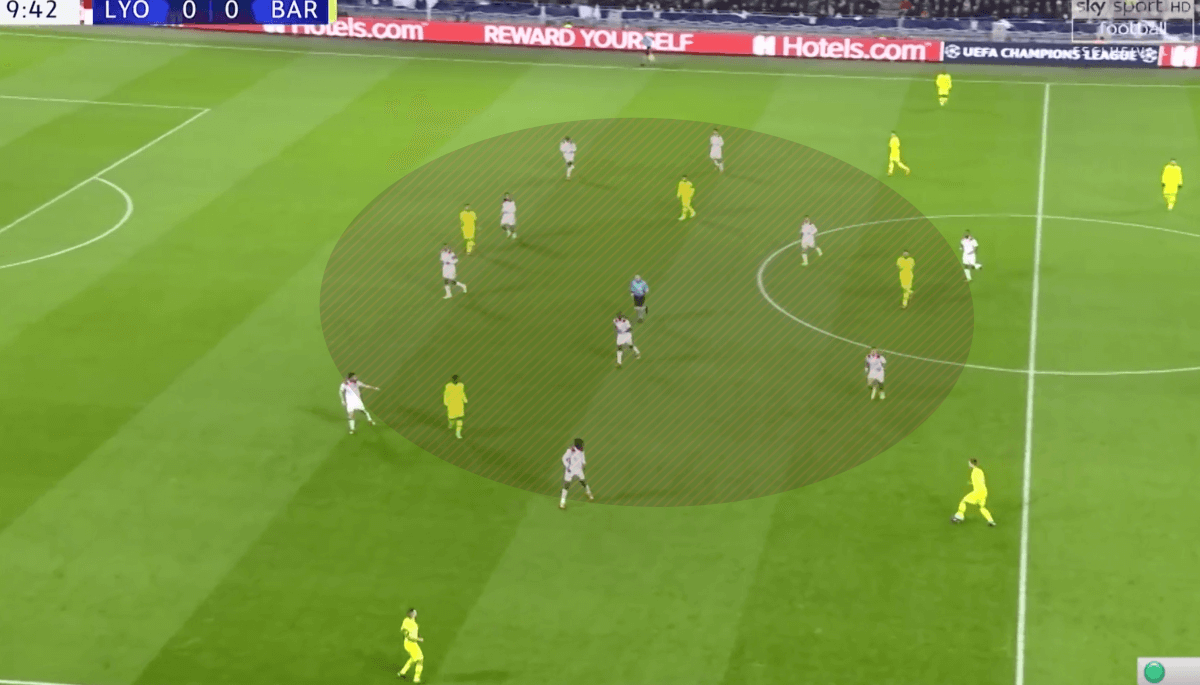 As a defensive contribution, the forward pair also dropped deep to cover Rakitic and Busquets. This allowed a stable circulation phase for the visitors in Lyon’s half and also a way to recycle through the centre-backs.

Therefore, the away team were able to switch play at will and utilise the space on the wings, as is evident in their pass map. Due to the lack of hindrance in their circulation, Barcelona were able to use Rakitic and Busquets as the pass map shows. In addition, Barcelona favoured the left wing occupied by Jordi Alba and Ousmane Dembele.

Consequently, Lyon’s narrow defensive block had to shift side to side which revealed some issues. The starting structure might have been compact but as they adjusted to the ball’s position the lines stretched which opened up space to be exploited by Barcelona.

Here is an instance below. There is a gap in Lyon’s second line, in between Ndombele and Traore, where Dembele can drop. Barcelona switched the play to the left wing and Dembele was able to receive the ball between Lyon players. 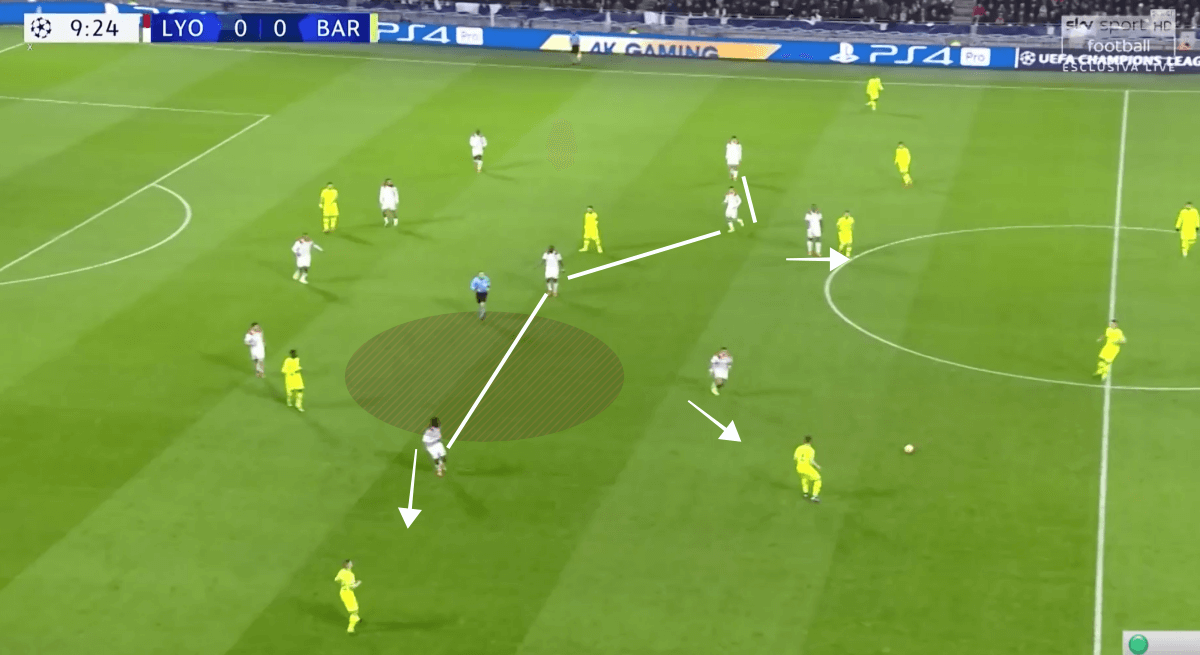 Due to Lyon’s man-oriented defence, the away team often exploited the passing channels, as the image highlights below.

Another frequent scenario saw Lyon unable to prevent the opposition passing behind their defensive shape which caused some dangerous situations. As you can see below, Barcelona found huge spaces on the wings and utilised them with a pass towards Jordi Alba. 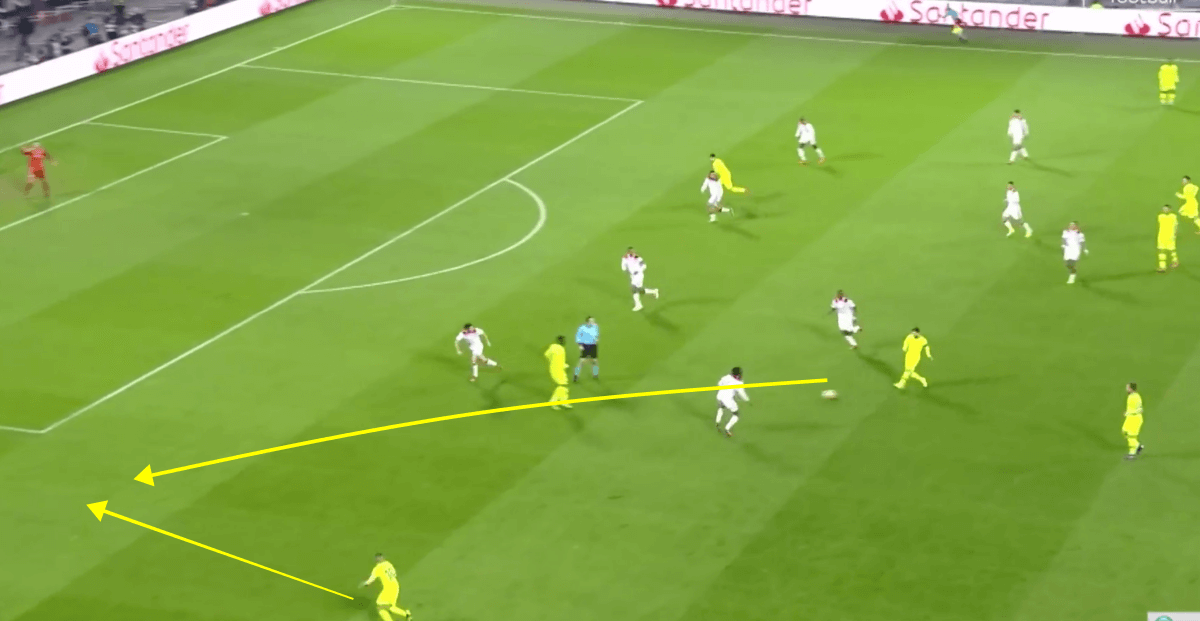 Lyon met with lots of occasions where Barcelona found breakthroughs. The visitors had several promising situations, but their final passes were far from spot on as they failed to create actual scoring chances.

If truth to be told, some of these errors were forced by Lyon. When Barcelona found these breakthroughs, Lyon often squeezed the space and congested play in a really small area which was difficult for their opponents to act in. 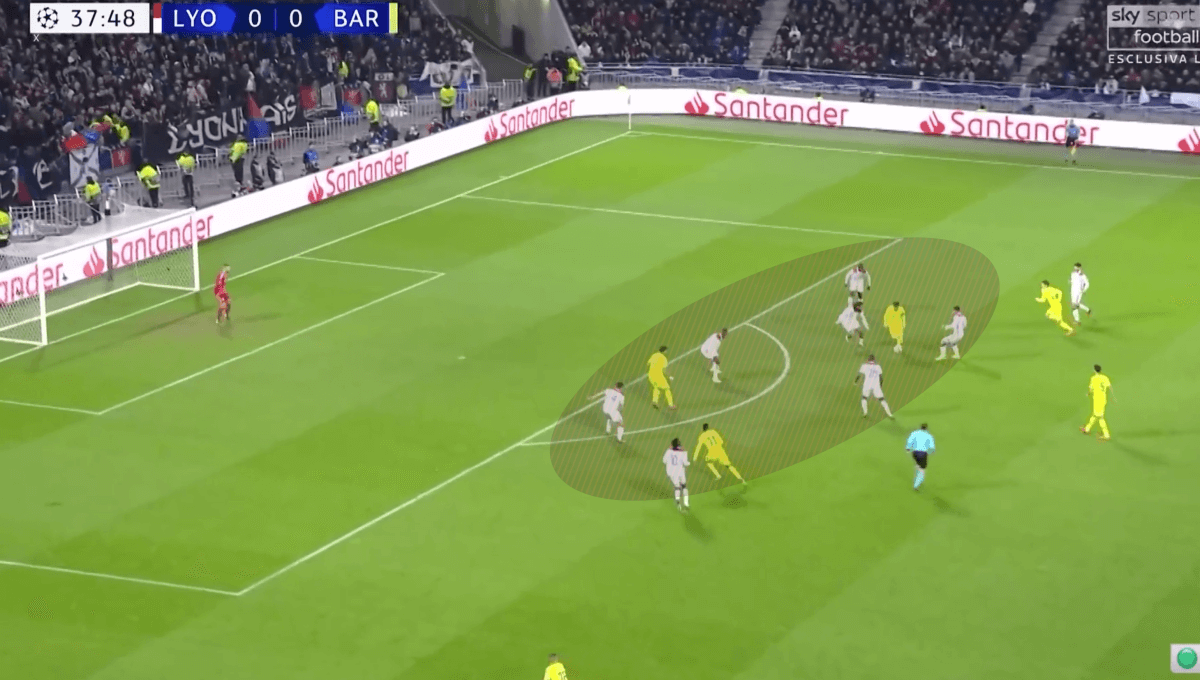 Lyon’s initial game plan mostly relied on counter-attacks to take advantage of their speedy attackers. However, the transition from defence to attack was not as smooth and quick as it should have been, due to Depay and Moussa Dembele’s deep positioning. Lyon lacked attacking phases, although there was an improvement in the second half.

In the second 45 minutes, Lyon’s attackers were positioned higher which helped produce some dangerous counter-attacks, mostly through Depay. All in all though, they were still weak going forward, as the chances show below. They only produced an xG of 0.44.

This result left the tie open which gives the opportunity for Lyon to fight at the Camp Nou to advance to the next stage of the Champions League. However, that will obviously be a much harder task. Barcelona are an even harder opponent at their home ground. Another French team, PSG, could tell you about this.