How Nice kept a clean sheet against Lyon’s attacking threat

After their huge victory over PSG, Lyon continued the battle in Ligue 1 this weekend as they visited Nice. The visitors came to this match with the plan to disrupt their opponent’s play with pressing. This generated some good recoveries and dangerous counter-attacks. However, they ended up with a goalless first half despite some goalscoring opportunities. This tactical analysis will show how Nice were able to beat Lyon by a fairly late goal.

Lyon were guaranteed to remain third whatever the result. Although the hosts were only ninth before kickoff, with a victory Nice could rise up the table. As a result, they had to take this clash seriously, especially after a big defeat against Lille in their previous game.

Genesio’s side operated with the usual pair in front of the defence, Tanguy Ndombele and Houssem Aouar, as a double pivot. Nabil Fekir occupied the 10 space while Memphis Depay and Bertrand Traore had important roles since they were often found free on the wings, especially ex-Manchester United forward Depay. This meant they could provide crosses to the box, where Moussa Dembele was waiting up front. 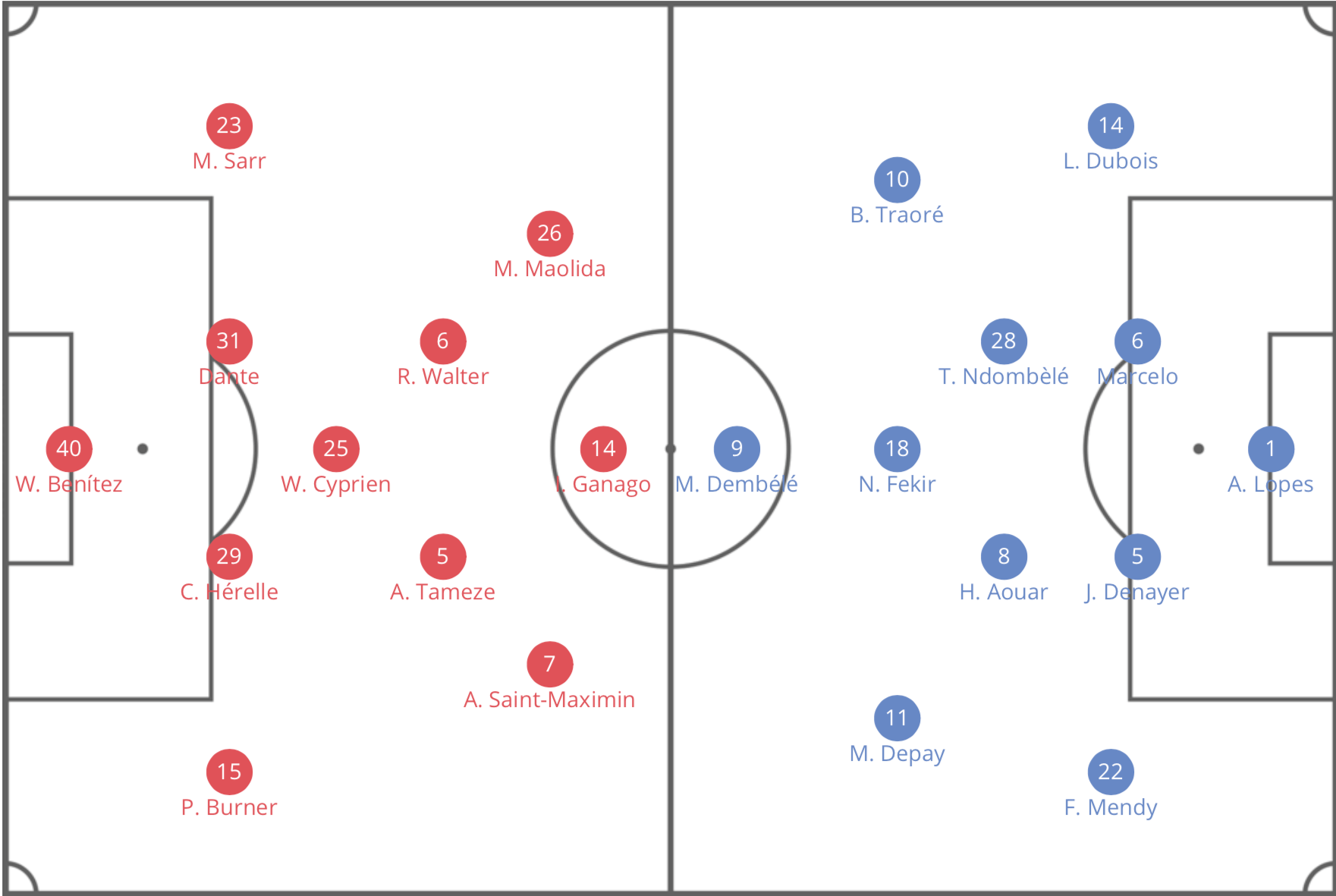 In the first few minutes, we saw how Lyon attempted to build from deep. Meanwhile Nice pressed high with their 4-3-3 formation where Myziane Maolida and Allan Saint-Maximin used curved runs to press the opposition centre-backs and block the route towards the full-backs at the same time.

They started to press instantly when the centre-backs received the ball. Furthermore, in the next image, you can see the central focused setup from Nice and how Ganago kept Ndombele in his cover shadow. 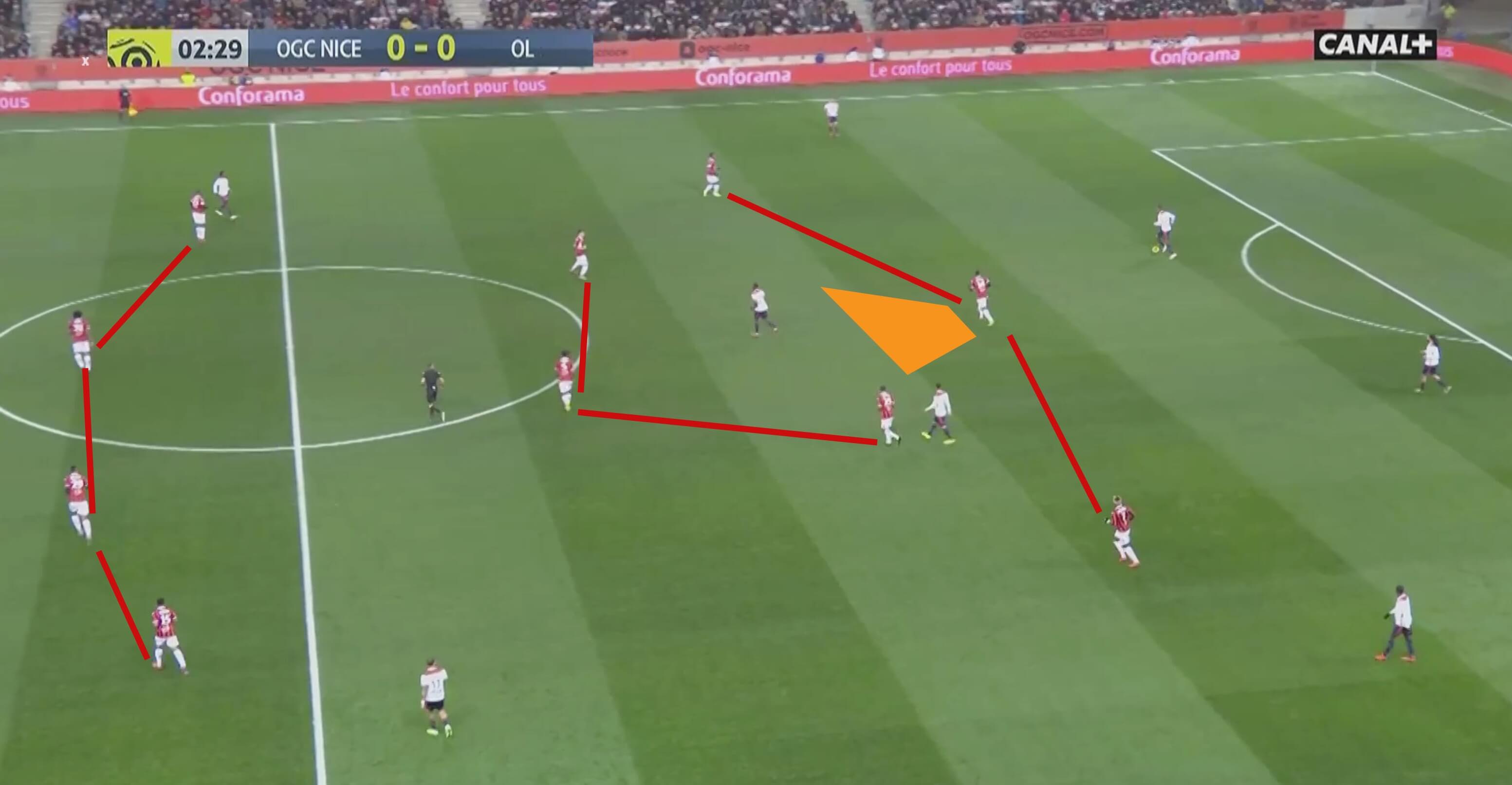 This also occurred in the second half, when Nice forced the visitors wide where the only option was a long ball.

After a few minutes, Nice has started to become the dominant side and thus possessed the majority of possession. The visitors also aimed to build from deep, therefore the visitors moved from the base 4-2-3-1 formation to a 4-4-2 shape against the ball and aimed to prevent Nice’s progression.

Traore and Depay dropped in the midfield line while Fekir joined Dembele to press the opposition centre-backs which created a numerical superiority for Nice. Since Cyprien remained open he was the outlet for Nice to escape the opponent’s press in some occasions.

The example below demonstrated this. Lyon forced the home side wide, but with the spare man Nice were able to bypass the first line of press. However Lyon quickly adjusted in these situations and forced the opponents backwards. On only a couple of occasions were Nice able to take advantage of the numerical superiority and progress to Lyon’s half.

Moreover, Nice sometimes used volleys towards the front three in behind Lyon’s defence. This was a permanent pattern in their play, with an example coming in the first minute. Ganago received a ball from the centre-back and faced Lyon Keeper Anthony Lopes, but due to the sharp angle he shot wide.

They also attempted to utilise the forward players with vertical balls. Therefore although they bypassed Lyon’s first lines of press, the receiver had to face huge pressure which forced him to give up the ball and led to dangerous counter-attacks.

Clearly, the basic idea of scoring for Lyon was to win the ball in dangerous areas and quickly transition into attack. This caused serious issues for Nice but Lyon failed to score. In the opening 20 minutes, Lyon scored twice but both were ruled out by the referee.

Lyon continued to be active in attack in the second half, especially after Nice scored from a penalty, opting for a highly reactionary role. After the 58th minute the hosts focused on counter-attacks. This was more visible when they took the lead and switched to 5-4-1 formation.

Jallet replaced Ganago in the 74th minutes which led to the change in formation. As a defender, Jallet dropped in the defence line to create a five-man line, whilst Maxime Pelican took the left wing and Tameze moved to the right.

Since Nice formed a 5-4-1 shape to protect the lead Lyon were able to create longer possession phases in the home side’s half. One pattern in their positional play was aim at overloading the opposition’s last line. Besides Dembele and Fekir occupying that line, Depay and Traore also moved narrow to pin the opposition full-backs which provided space for Lyon’s full-backs to push forward.

This offered a good connection in between Lyon’s full-backs and wingers, especially on the left wing where Lyon mostly attempted to attack. However, Nice were able to press the opponent’s full-back or winger on the ball, leaving Lyon with a difficult task. When they managed to cross into the box it was hard to create scoring chances in a congested area.

Overall, Lyon played better despite failing to win. They had 23 shots and some were big chances but something was always missing as they dropped important points. On the other hand, Nice gained really valuable points with this victory. Nevertheless, Patrick Vieira has work to do with this team since winning by a fortunate penalty goal is a delicate victory.