Fresh off the back of a stunning 3-3 draw away to Juventus, Parma Calcio welcomed third-placed Internazionale to the Stadio Ennio Tardini on Saturday. The historic Gialloblù from the Emilia-Romagna region of northern Italy currently sit 12th in Serie A, in what is their first season back in Serie A since their demotion to Serie D in 2015 following the club’s bankruptcy that same year.

Inter had the misfortune of being on the wrong side of the first Gialloblù win of the season back in September, as Parma triumphed 1-0 at the San Siro. The Nerazzurri have had a rough run of results of late, with no wins in their last four games which included a Coppa Italia exit to Lazio. Realistically Inter’s only hope of silverware this season is the Europa League, a disappointing state of affairs given the promise of their early season results.

Inter boss Luciano Spalletti is under pressure to prove he can get the best out of this group of mercurial players, as little improvement has been shown from last season. For Parma and their manager, Roberto D’Aversa, life back in Serie A has been tough as expected but their 12th placed position is respectable. Let’s take a closer look at how the drama unfolded, analysing both sides’ tactical approaches. 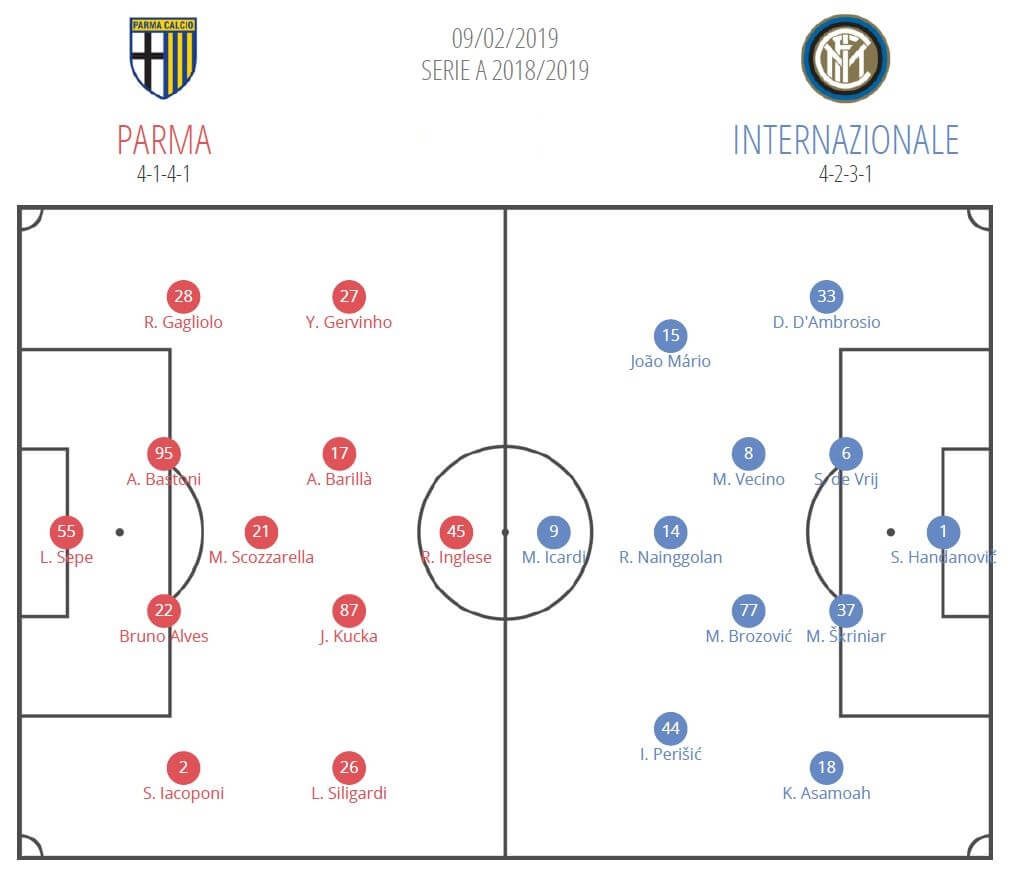 A 4-1-4-1 on paper for Parma played out as a more ambitious 4-3-3 on the pitch. D’Aversa could call upon the experienced and physically imposing Bruno Alves to marshal the backline, Antonino Barillà is among the league’s top 20 for average kilometres run in a game while Gervinho and Roberto Inglese have notched eight goals each this season.

A 4-2-3-1 would see Inter’s wide men, ex-West Ham loanee João Mário and Ivan Perisic, play quite narrow while Radja Nainggolan would be charged with supporting leading striker Mauro Icardi. Marcelo Brozovic played as the holding midfield man. The Croatian midfielder is the most successful ball winner in Italy this season, as well as having the highest average distance covered in the league.

With both teams looking to build-up from the back, they also both encountered their opposition in the form of formidable high defensive blocks. Inter looking to assert their superiority and keep Parma in their own half, while Parma looking to stifle any passing sequences for the visitors and perhaps capitalise on their recent lack of confidence.

Parma’s approach, in particular, was quite calculated. From Inter’s goal-kicks, Parma invited the Nerazzurri into the wide channels where they would then spring their pressing trap, closing the pitch to the narrow flank Inter had played themselves into. This left the Parma back four marking almost man-to-man on the halfway line but the Gialloblù fancied their chances in aerial duels when Inter played the ball directly to their forward players.

In fact, Parma’s defensive strategy focused heavily on man-to-man marking all over the pitch. Centrally Parma cut off the visitors’ short passes into their holding midfield players, inviting the long ball from either goalkeeper or defender. This was the perfect foil for an Inter side that lacked the pace to get in behind the Parma backline, instead looking to play a slow build-up game, carefully moving their pieces into position.

While Inter also halted any of Parma’s attempts to build up from their goalkeeper, the home side gladly turned to an alternative tactic. Parma’s front three were positioned high and narrow to pin back the Inter back four, with Parma then looking to play the ball into the feet of the mobile and dangerous Gervinho and Inglese.

Gervinho seemed to target D’Ambrosio, constantly looking for one-on-one situations against the Italian right-back or looking to beat him for pace in behind. Parma’s forwards had support from their midfield as well, runs not always tracked by Brozovic and Vecino.

Gervinho would be the home side’s main attacking outlet, particularly in transition from defence to attack. As the Inter full-backs pushed forward, Parma’s wingers looked to take advantage of the gaps they left on the flanks.

With D’Ambrosio supplying almost all of the width on Inter’s right flank, Gervinho and Inglese consistently found some joy down their left side. It almost paid off too, Gervinho smashing the crossbar after an incisive run down the left wing.

Gervinho’s 21st-minute attempt aside, goal-scoring chances remained a rarity through the first half. Each team could only muster one shot on target throughout the first 45 minutes. Inter dominated the ball as expected, but Parma looked dangerous enough on the counter to keep them honest.

Spalletti’s tactics, though, left a lot to be desired from an Interisti point of view. Without players like Keita Balde, Politano or Martinez, Inter lacked pace and instead seemed to rely on the creative talents of Mário and Nainggolan, if they could get them the ball in the right areas. This explained their slow build-up and lack of runners behind the Parma defence.

Lacking pace is one thing, but lacking attacking intent is another. Inter’s approach seemed a cautious one, lacking the forward running and risk-taking needed to break down a stubborn low-block such as Parma’s. Their passing seemed safe and slow, lacking any real attacking verve or quick interchanges.

When Inter did move their pieces into the right positions, the quality of their final ball and particularly their cross attempts were woeful. Time and time again, better-positioned players were ignored at the preference of finding a tightly marked Mauro Icardi with a cross. Even then the crosses rarely landed in the same postal code as the Argentine striker.

Even when they did, Icardi found himself so tightly marked by Bruno Alves that he didn’t win a single aerial duel in the Parma half all game. Centre-backs Alves and Alessandro Bastoni (who is on loan from Inter) comfortably repelled cross after cross as Inter finished the game with only five successful cross attempts from a whopping total of 38.

Spalletti did however eventually make a change that Parma couldn’t respond to. Argentine striker Lautaro Martinez came on in the 77th minute to replace João Mário and Inter switched to a 4-4-2 formation. Two strikers now occupied the two Parma centre-halves and Inter had a bit of pace to their attack. It took very little time to pay off.

Following another successful tackle from the imposing Marcelo Brozovic, Radja Nainggolan was released on the counter-attack and immediately drove at the Parma defence. Both Inter’s strikers made forward runs and Martinez met the through-ball from his Belgian teammate before taking a touch out from his feet and smashing home the winner into the roof of the net.

Parma 0-1 Internazionale: Lautaro Martinez had managed to assert more of an influence in two minutes than most of his teammates had in 77.

One Inter man who did assert his influence over the 90 minutes was Marcelo Brozovic. The Croatian midfielder was key to Inter’s build-up play, linking the defence with the attack and playing through Parma’s high-press in the early stages. Brozovic had an 89% pass completion rate, completing 91 of his 102 passes. Only 16 of those passes were played in his own third while 61 of them were forward balls.

Brozovic was also the most successful one-on-one dribbler on the pitch, winning four out of four take-ons. His defensive duties didn’t suffer either. The Croatian had the highest amount of ball recoveries in the game, winning the ball back nine times for the Nerazzurri. Brozovic has long been a key man for Inter but the 26-year-old is beginning to look like a top-class holding midfield player, one that Inter will do well to hold onto if their fortunes don’t improve. 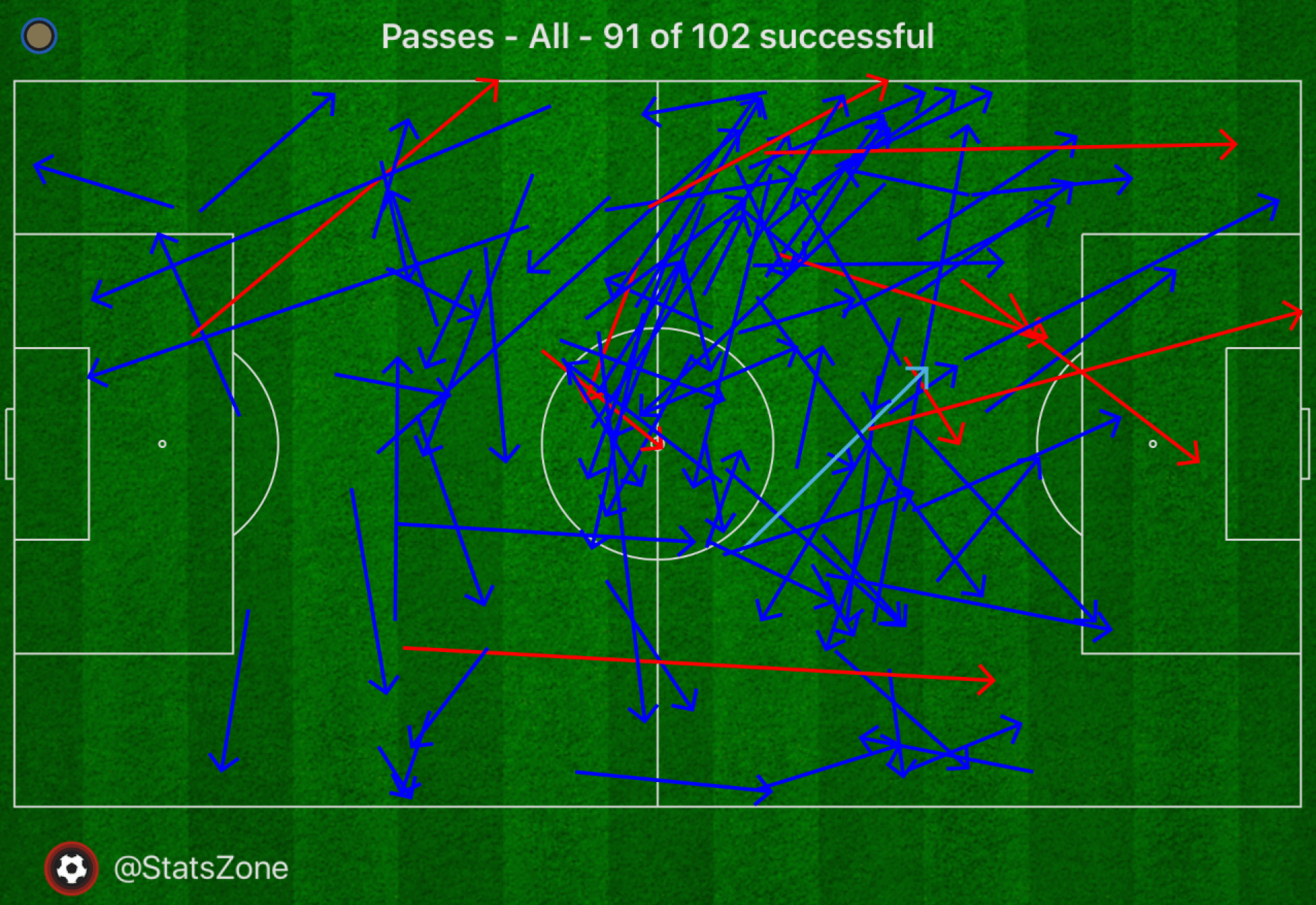 A hungry and energetic Lautaro Martinez saved his manager’s blushes after a blunt-edged tactical plan failed to inspire the Nerazzurri’s starting XI. Inter’s approach was stifled expertly by Parma and Spalletti’s side had no answer until the last 15 minutes.

It’s hard to argue with a manager’s tactical approach when his side have ultimately won the game, but the relentless crossing with no success was a baffling tactic to stick with for so long. The reintroduction of pacey, penetrative runners looks needed for Inter’s next Serie A match at home to Sampdoria.

Parma were resolute and clever in defence and were largely comfortable throughout the game, though did not have the requisite quality to really hurt Inter in the opposite direction. D’Aversa can be happy with his side’s effort and performance, though they didn’t react quickly enough to the introduction of Martinez. Parma next face a trip away to Cagliari whom they now sit eight points clear of.