After 85 days MLS is back with an interesting clash right at the start. DC United hosted the reigning MLS Cup champions Atlanta United. The fact that Atlanta have never won in the capital foreshadowed that this would be a tough game for them. The visitors’ fans will still have to wait for that victory thanks to the goals from Paul Arriola and Luciano Acosta that handed DC United a 2-0 win. This tactical analysis profiles Atlanta’s new setup and will reveal why they suffered this defeat. 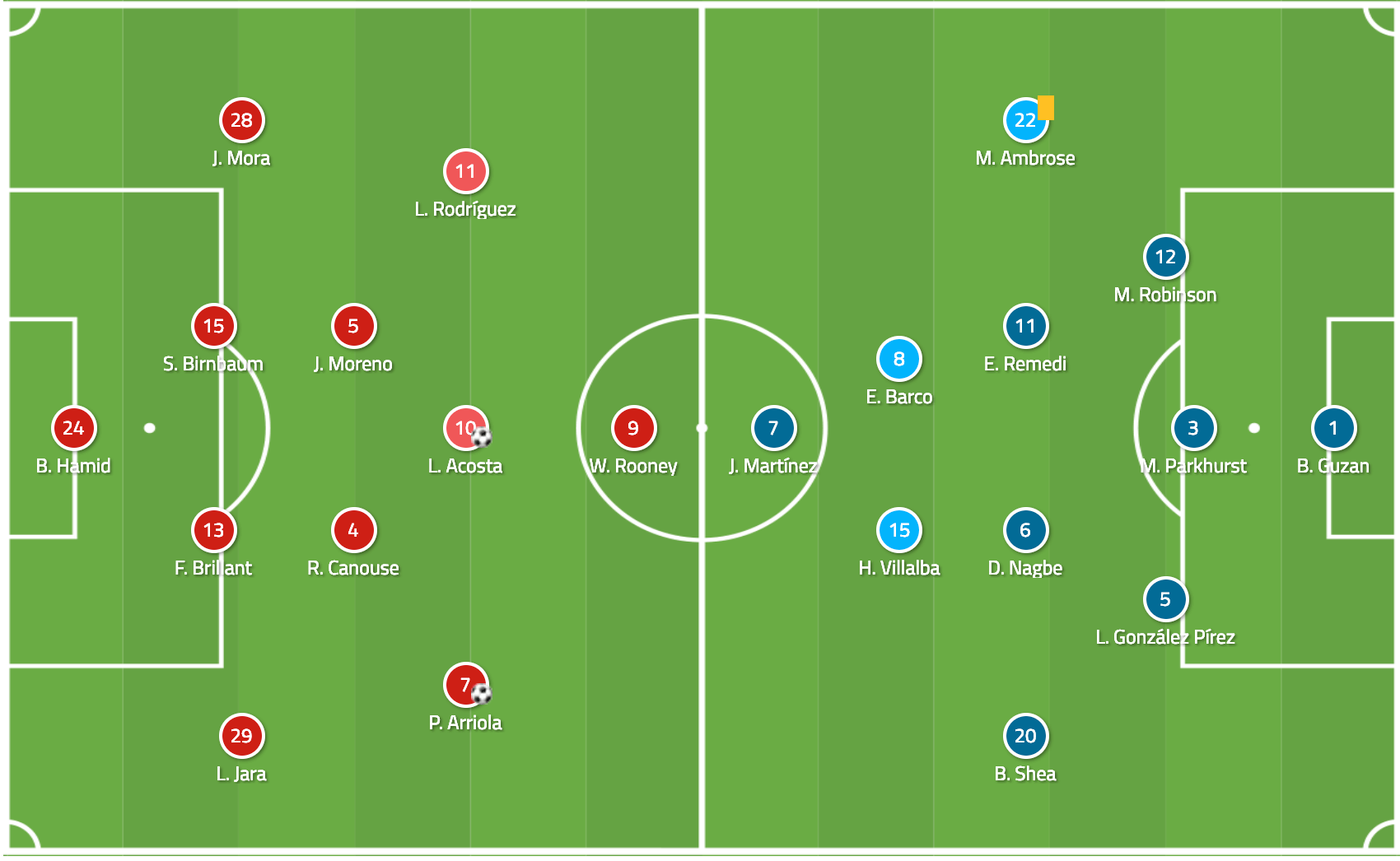 The home side operated with their usual 4-2-3-1 formation where they could take advantage of Wayne Rooney’s counter-attacking and creative abilities. The biggest change in their starting XI was the new signing of Lucas Rodriguez who came from Estudiantes on a loan.

Meanwhile for the visitors there were some major adjustments for this season, starting with the personal change in coach. Tata Martino left the club and Frank de Boer has come on board, while they have also sold one of their most important players, Miguel Almiron. A crucial development for this season has been how De Boer has deployed a new 3-4-3 formation.

For this game, the former Ajax manager made two changes from the midweek CONCACAF Champions League game. Mikey Ambrose played instead of Julian Gressel, while Hector Villalba replaced Gonzalo Martinez.

De Boer also favours a possession-based style of play as Tata Martino did, therefore it is important to look into how Atlanta behave during possession phases. The base formation was 3-4-3, which in defence morphed into 5-4-1/5-3-2 with Villalba and Barco moved into the midfield line.

However, in possession, it was more likely a 3-2-2-3 shape that can handy in the build-up. Since De Boer wants his team to play from the back, it is important to have a stable base to progress from. The three at the back can provide an adequate setup for good circulation.

As the image below shows, Nagbe often moved outwards to the defensive left half-space to provide a passing option outside the opposition block.

Although Atlanta like to dominate the game and be on the ball longer, DC United were able to maintain a considerable portion of possession in the early stages of the match due to their pressing scheme.

Furthermore, when Atlanta were able to play the ball to the opponent’s half, they still had to contend with heavy pressure around the ball as DC United closed on them like in the instance below. Mora presses Ambrose on the ball while Rodriguez blocks the backward pass towards the near-side full-back. Barco and Villalba often moved to the ball side to provide a passing option and create a combination, but Barco was tightly marked by Moreno.

Atlanta’s space creation in the half-space

There were some occasions when Atlanta revealed some tools to create space in the opponent’s shape to exploit it and progress up the pitch. In this section I will show some of these tools. As the image below shows, it occurred in the left half-space where Gonzalez Pirez progressed on the ball.

The key was that Atlanta were able stretch the opponents’ line. Starting with Nagbe’s movement, which dragged Arriola with him, Villalba also dropped deep meaning Canouse had to stay in position to mark him. This created a gap in between the central midfielder and the winger.

While in the next example, Villalba dropped into the left half-space and was targeted with a vertical ball from Gonzalez Pirez between Canouse and Arriola.

However, overall De Boer’s men struggled to outplay DC United’s midfield press and reach the attacking third. Even if they managed to play the ball to the final third, they failed to create chances. Sometimes they seemed schematic which made the home side’s job easier.

Ben Olsen’s side chose to maintain a medium block that tried to deny their opponents central progression by covering players in this zone. Therefore, DC United did not press actively, but rather blocked the central area. In this phase, they formed a 4-2-3-1 or 4-4-2 shape against the ball.

This image below highlights the basic idea of Ben Olsen’s setup. You can see each player has specific duties. Starting at the top of the formation, Rooney often covered Darlington Nagbe while Acosta did the same with Eric Remedi. Now we have the reason why Nagbe frequently moved outwards which will have an importance that I will elaborate on later.

The wingers, Arriola and Rodriguez, blocked the route towards Atlanta’s wing-backs. Also, situationally Junior Moreno and Russell Canouse marked Villalba and Barco when they dropped deep.

In this environment, the visitors struggled. They could not find a reliable way to bypass this block due to the lack of passing options. Thus Atlanta had to circulate the ball across their defensive line. Although the home side did not press most of the time, one thing always triggered their press. When the ball moved to Robinson Rodriguez, they instantly pushed forward to press him.

When this occurred, Ambrose usually started to drop deeper to help Miles Robinson and give an outlet. Joseph Mora paid attention to this and immediately followed him to press when Ambrose received the pass. This forced him to pass back which initiated the home side’s intensive press. Then, everyone pushed forward to press Atlanta.

The home side had to face Atlanta’s 5-4-1 defensive organisation which can be a difficult task for most teams. However, DC United aimed to attack quickly after recovering the ball to utilise Rooney’s abilities and the speedy wingers. Furthermore, they found Atlanta’s weak spot quite early.

After a switch of play, Ben Olsen’s man always found space that they could exploit, like in the situation below. The home side pulled the opposition shape to the left, which opened up space on the right. One thing is noticeable; in spite of their five-man back line, Atlanta lined up in a narrow shape.

In another instance, the home side pulled out the opposition wing-back which created space in behind him.

All that said, DC United had still not had many scoring chances. In addition, the goals didn’t occur thanks to a switch of play or space on the wings. DC United grabbed the lead through a corner situation at the end of the first half. The second goal was scored after a ball recovery when Atlanta’s defensive disorganisation was compounded by Brad Guzan’s individual error.

Atlanta approached the corner situation in a man-oriented manner. They used a simple man-to-man defence during corners as the image highlights below.

However, with this type of defence only one small individual mistake is enough to destroy the whole system and concede a goal. It can be a risky way to defend, especially if there are plenty of corner situations. The more corners faced, the more likely it becomes to make a mistake and concede a goal. This is what happened with Atlanta.

Thanks to the mistakes DC United grabbed an important victory. It is a silly to come to a bigger conclusion from this lone match, but they definitely can be dangerous in this MLS season.

Although Atlanta United suffered their first defeat right at the start, there is no need for panic. They will find better form, and considering this is the beginning of the new project with Frank de Boer there is room and time to develop.