The Merseyside derby saw Liverpool head to windy Goodison Park. The result was an end-to-end goalless draw. The match left Everton fans delighted as they put a dent in Liverpool’s title chase against Manchester City. Despite the joy of the draw, this fixture set up perfectly for Everton to steal the win over their fierce rivals.

Liverpool were uncharacteristically lacking in the final third. Unfortunately for Everton, their tactical strategy all but gifted Liverpool defender Virgil van Dijk the man of the match award. For the blue half of Merseyside, the match was real missed opportunity. This tactical analysis will look at Everton’s attacking tactics using statistics to show how their lack of buildup through the midfield enabled Liverpool’s best defender to dominate the match.

Liverpool set out in a 4-3-3 formation with Alisson in goal. Joel Matip and Virgil van Dijk anchored the back line with Trent Alexander-Arnold and Andrew Robertson either side of them. Fabinho, Jordan Henderson and Georginio Wijnaldrum were the midfield trio. Divock Origi got the start on the right with Sadio Mane central and Mohamed Salah on the left.

Everton countered with a 4-2-3-1 alignment. Lucas Digne, Kurt Zouma, Michael Keane, and Seamus Coleman made up the back line in front of Jordan Pickford. Morgan Schneiderlin and Idrissa Gueye paired centrally in midfield with Gylfi Sigurdsson in front of them. Bernard was wide on the left and Theo Walcott wide right, with Dominic Calvert-Lewin up top. 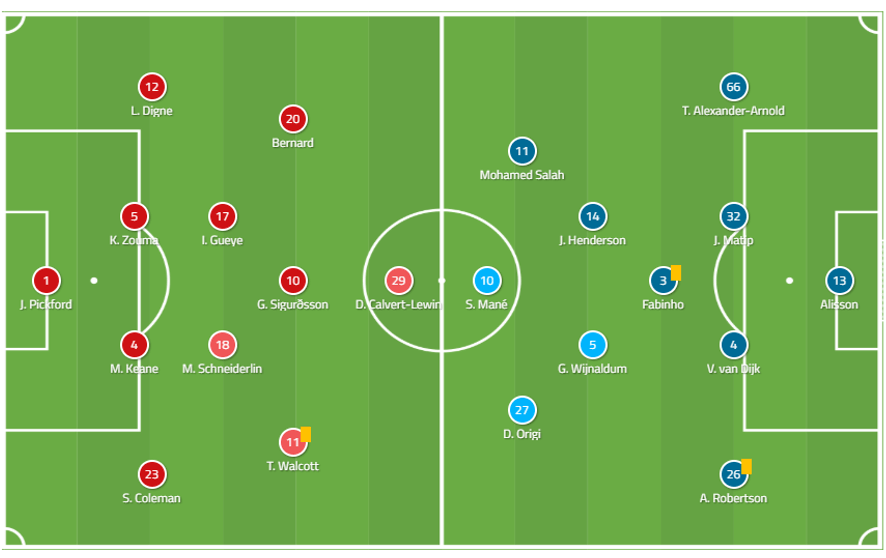 Liverpool in the final third

Liverpool entered and exited the game with 64 goals scored this season, but the lack of goalscoring was not due to a lack of chances. Liverpool were their normal selves getting into the attacking third with urgency, pace, and numbers.

Once there however, Liverpool was not themselves at all. Salah, in particular, had a rough night of missed touches and soft chances straight to the keeper. Liverpool’s uncharacteristic misfiring in the final third made them ripe for a Merseyside derby upset.

As the sequence below shows, it didn’t take long for the first major chance. In the seventh minute, Everton built up from the back with Keane starting the sequence. A simple ball is played into Gueye.

He then turns and plays a pass into Sigurdsson’s feet. The penetrating pass puts Liverpool’s defence into disarray. Sigurdsson receives between the lines and keeps Liverpool chasing by playing Coleman into the channel. 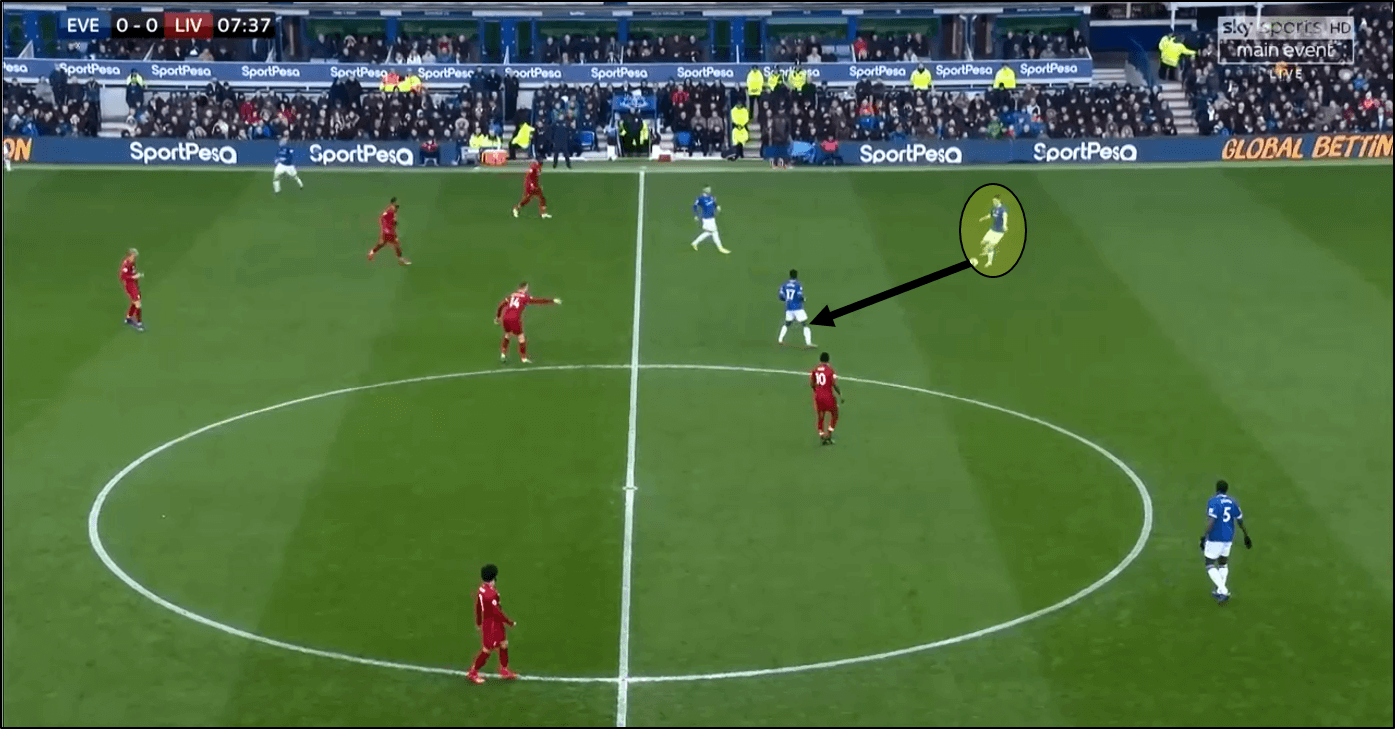 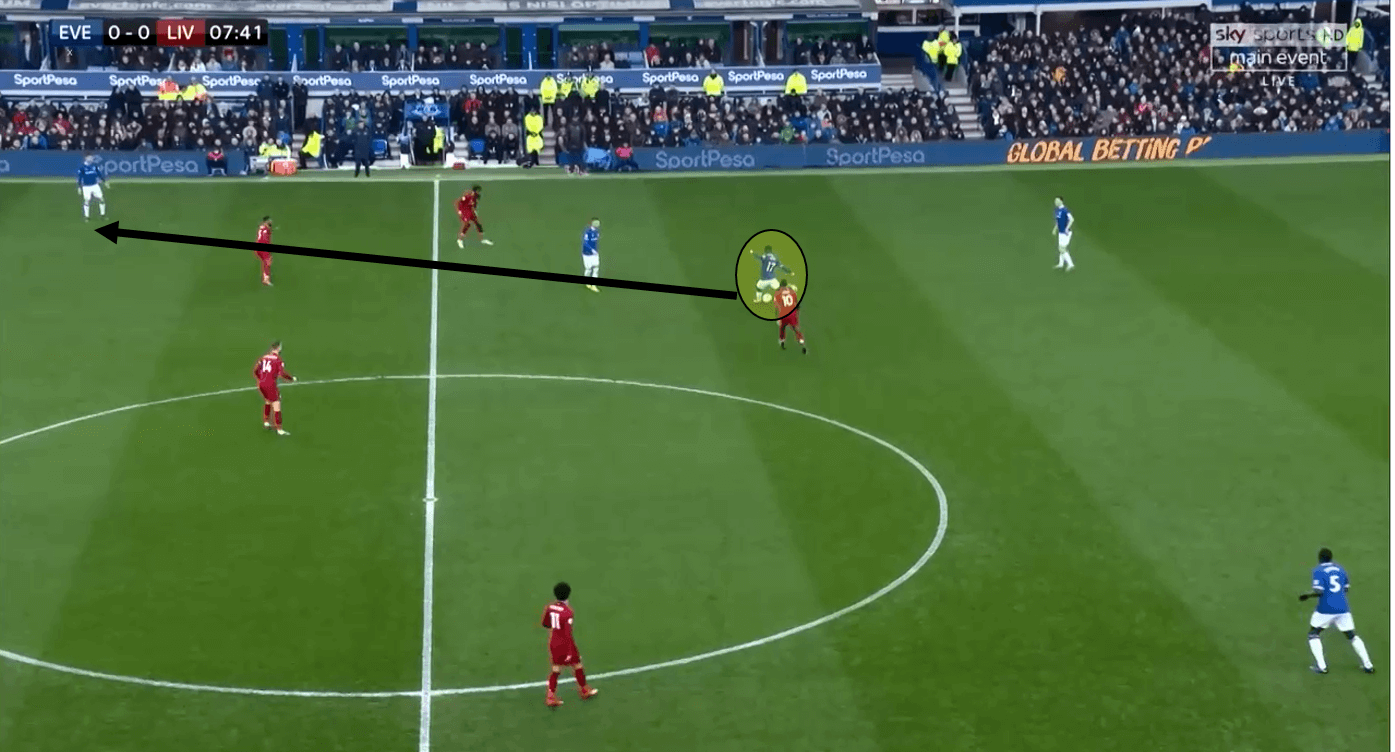 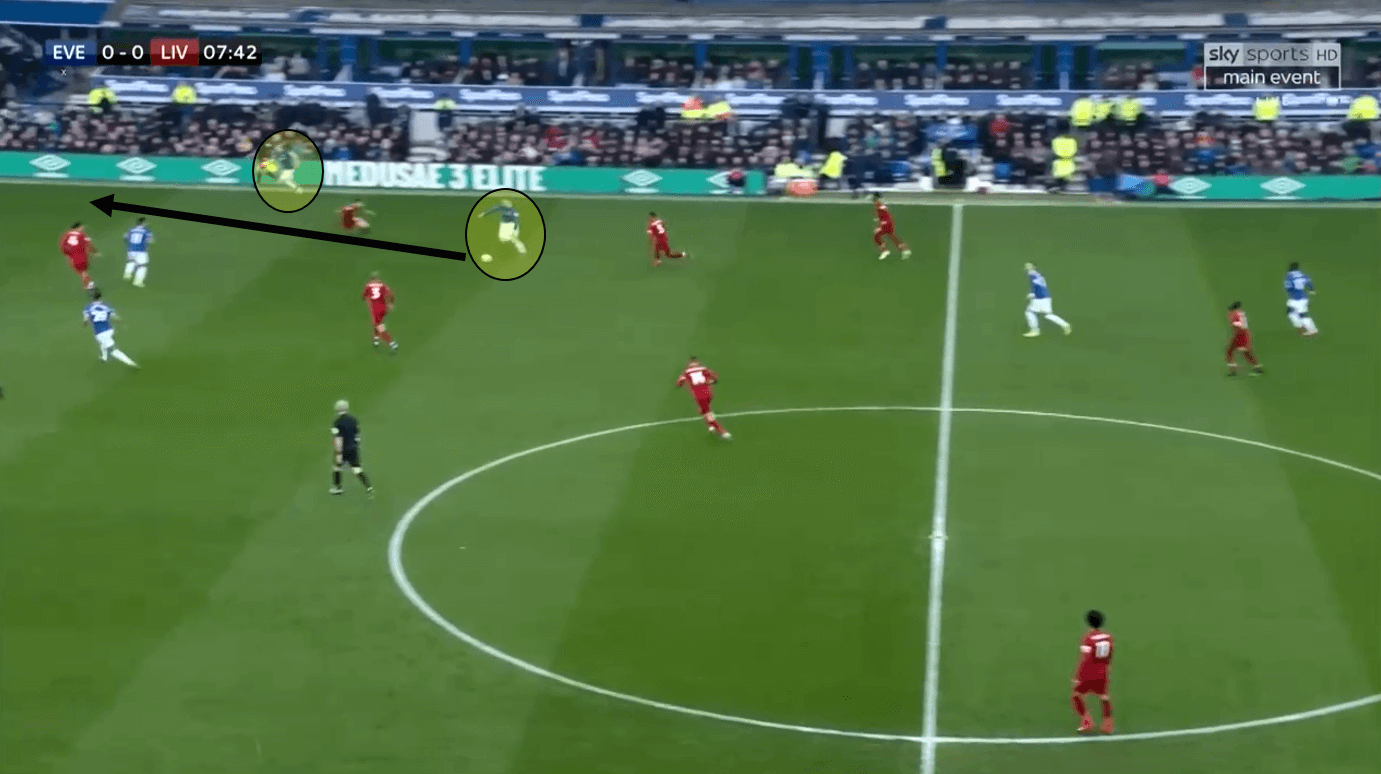 The sequence of passes results in a 4v3. Below you see the dangerous Coleman on the ball in the channel with committed Everton runners into the box. The Liverpool defenders are all facing their own goal.

Everton are in a great situation that is made even better due to Van Dijk, highlighted in red, being drawn out of the box isolated towards the ball. A near ideal scenario for Everton ended with Liverpool’s Alisson forced out to catch the whipped cross. 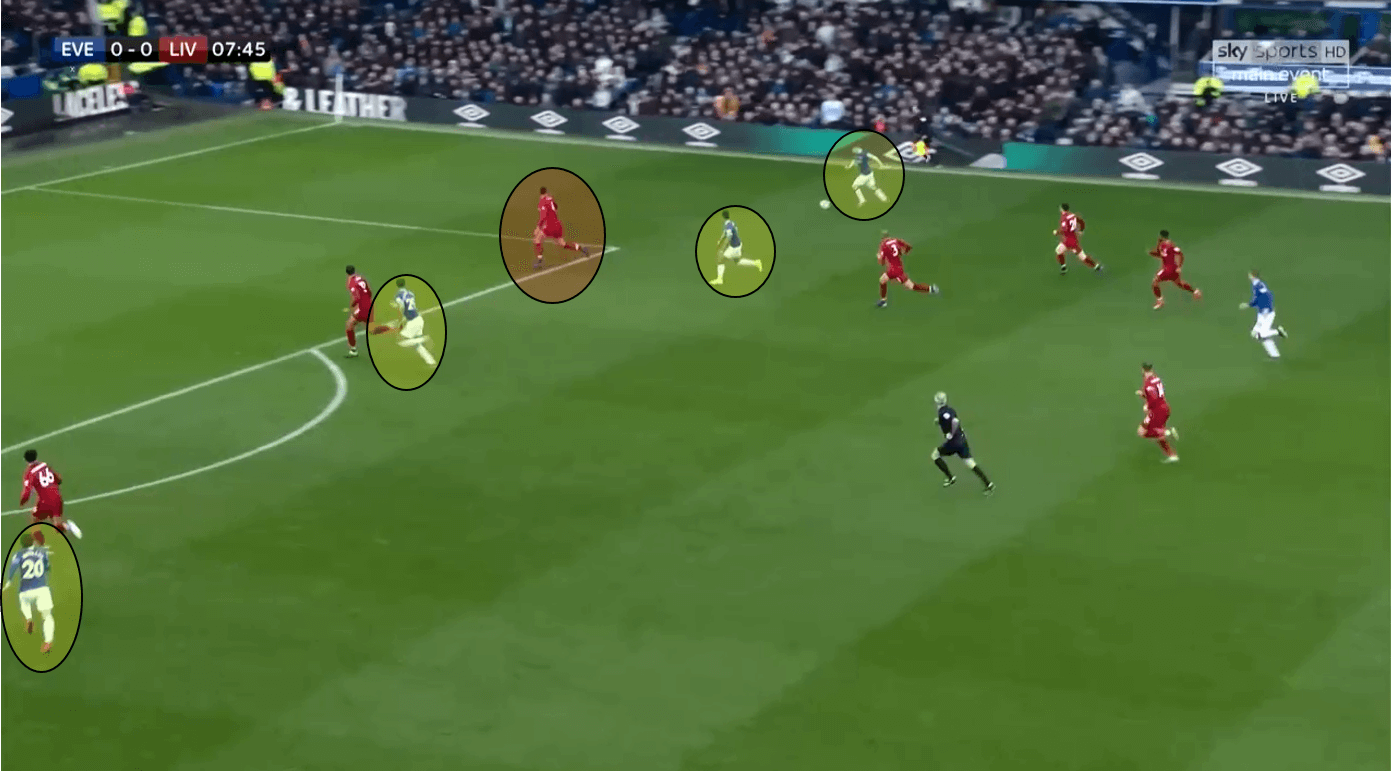 This attacking sequence was all due to Gueye receiving the ball at his feet and turning in midfield to play a forward pass. The early seventh-minute success should have been a blueprint for tactical attacking success for Everton. Unfortunately for them, they did not receive in midfield, turn and complete a pass again until the 72 minute.

Everton lack of success in midfield

In the 27th minute, Zouma finds himself on the ball and completes a penetrating pass into Schneiderlin’s feet. The Frenchman receives the ball between the lines in a perfect attacking position. The play has drawn Fabinho, highlighted in red, out of position and provided further passing options to either Bernard or Sigurdsson. 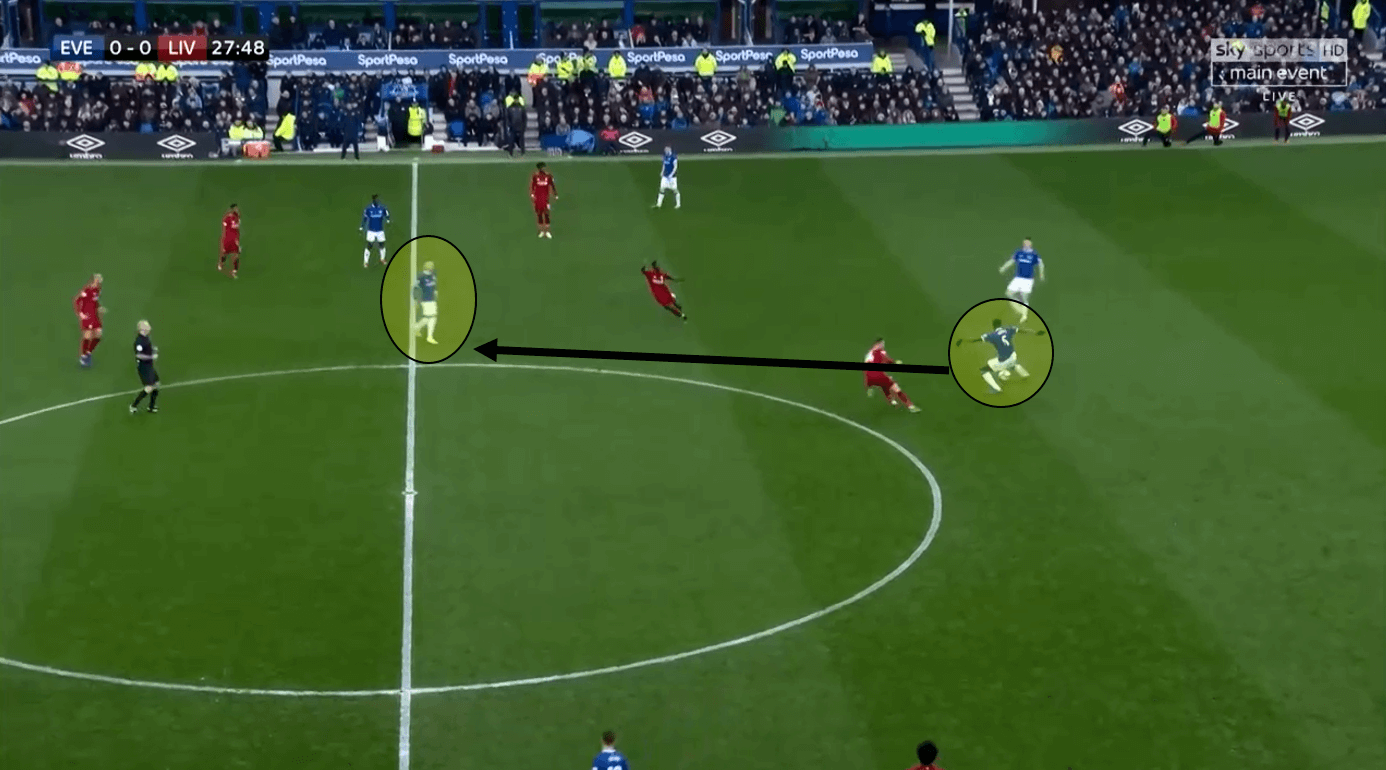 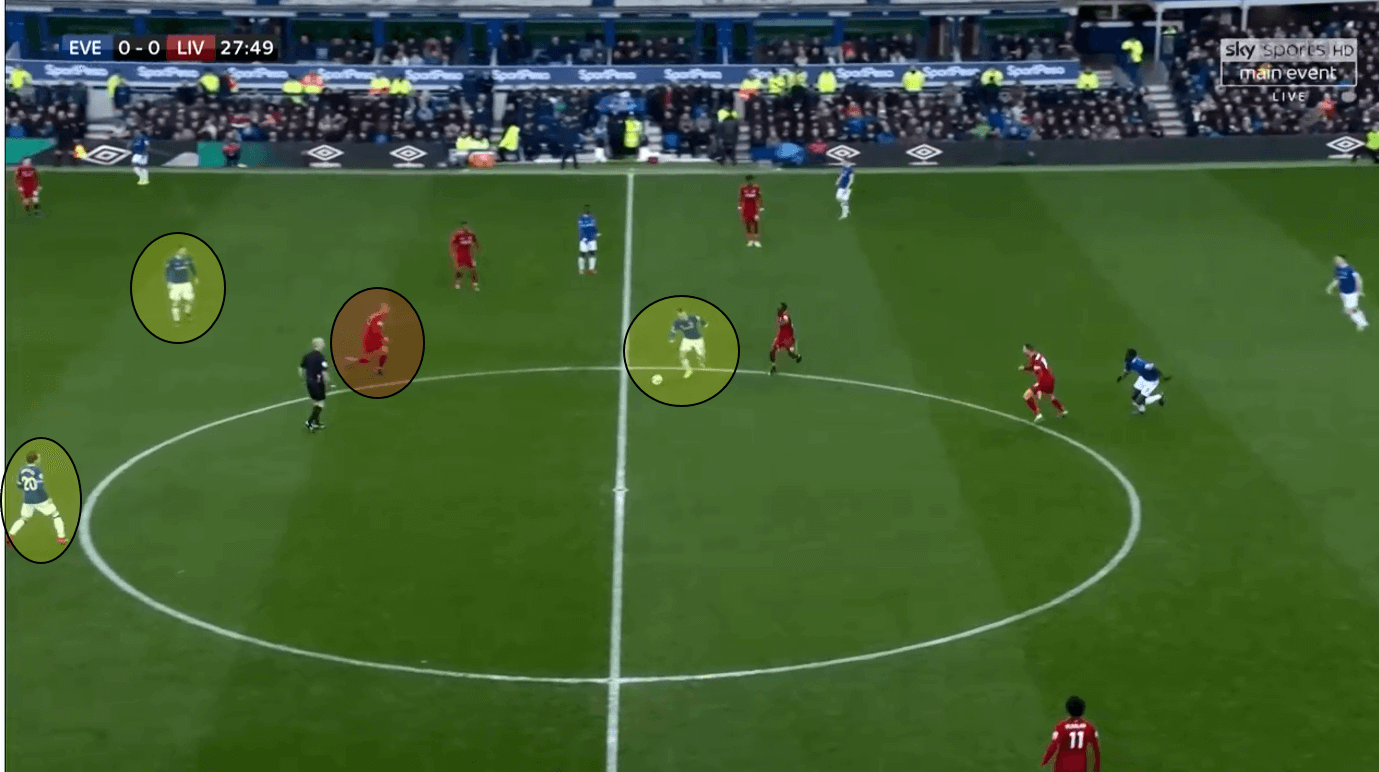 Unfortunately for Everton, Schneiderlin has a disastrous first touch gifting the ball to Fabinho. Fabinho expertly plays Salah in for a one-on-one with Everton keeper Pickford. A great save gets Schneiderlin off the hook for his bad play between the lines. 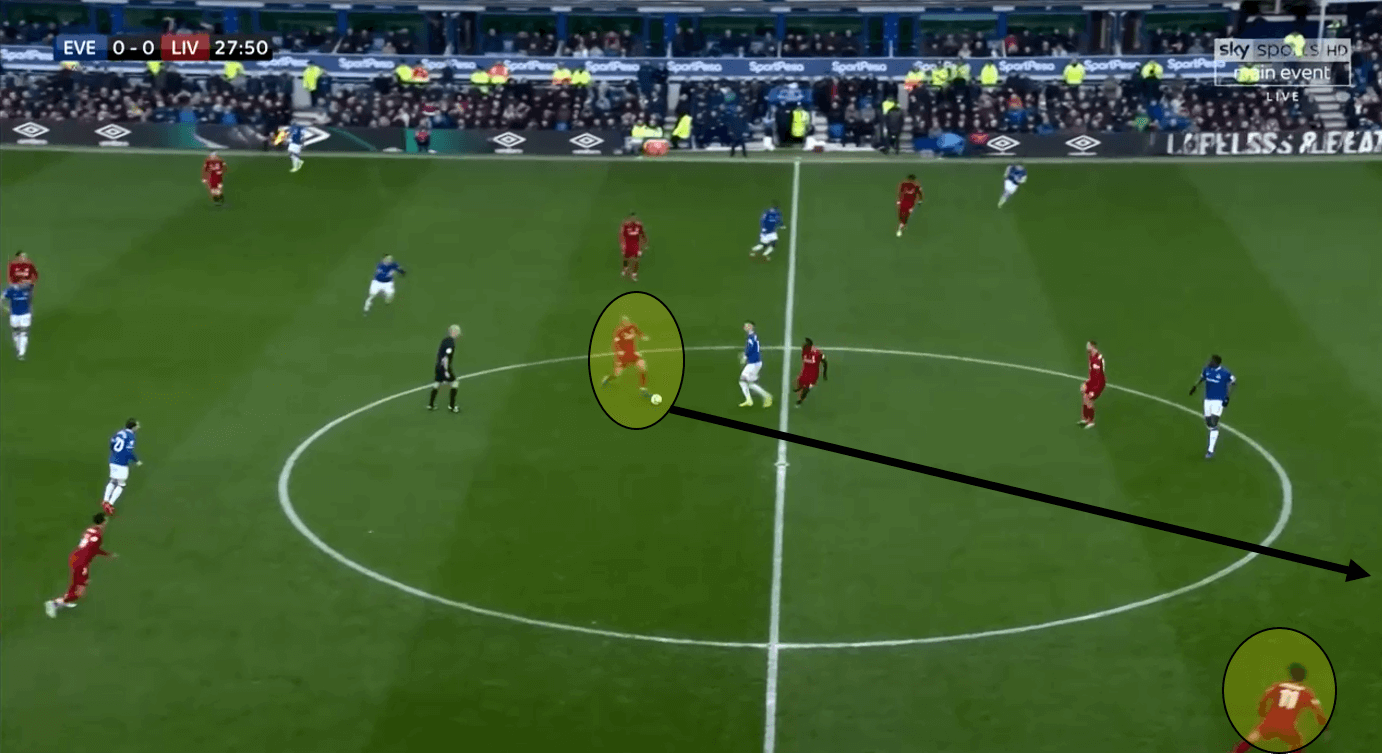 Instead of even considering turning, he plays it back to Keane, who in turn plays it back to Pickford. The England goalkeeper bombs the ball forward. The long ball ends in an aerial duel won by Liverpool’s Van Dijk. 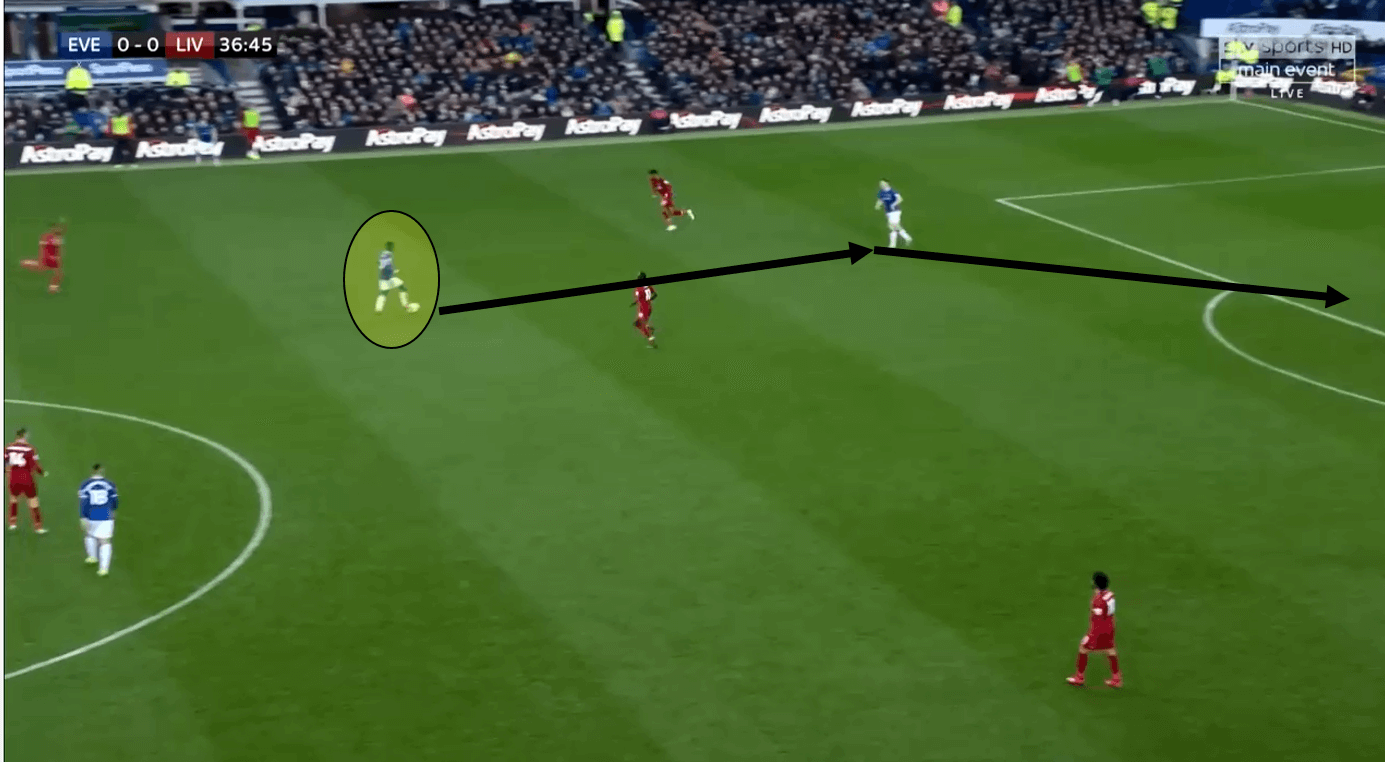 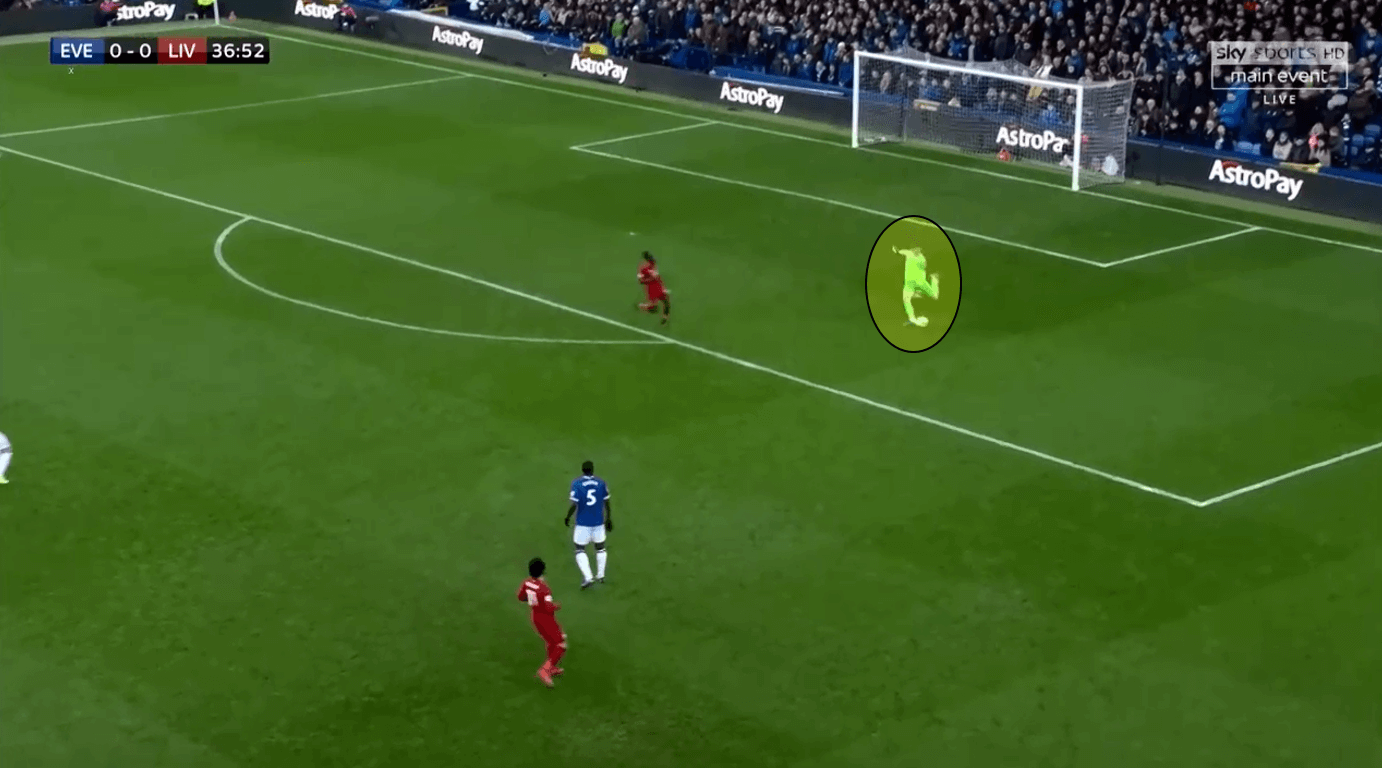 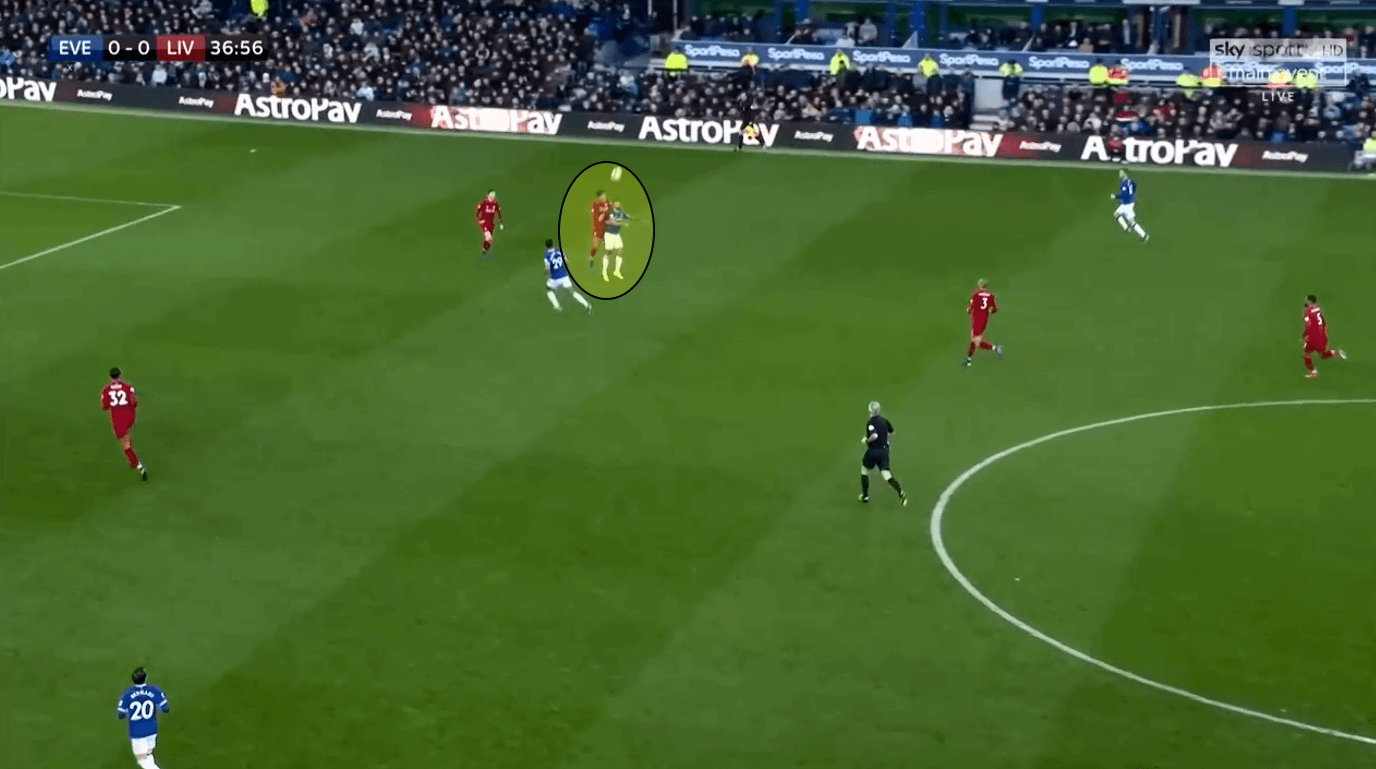 Under a minute later, the exact same pattern emerges, except this time with Schneiderlin on the ball. Below we see him receiving the ball with plenty of time and space to turn and attack forward. Instead of turning, he plays the ball back to Pickford. Predictably, forward goes the ball and again Van Dijk easily wins a header. 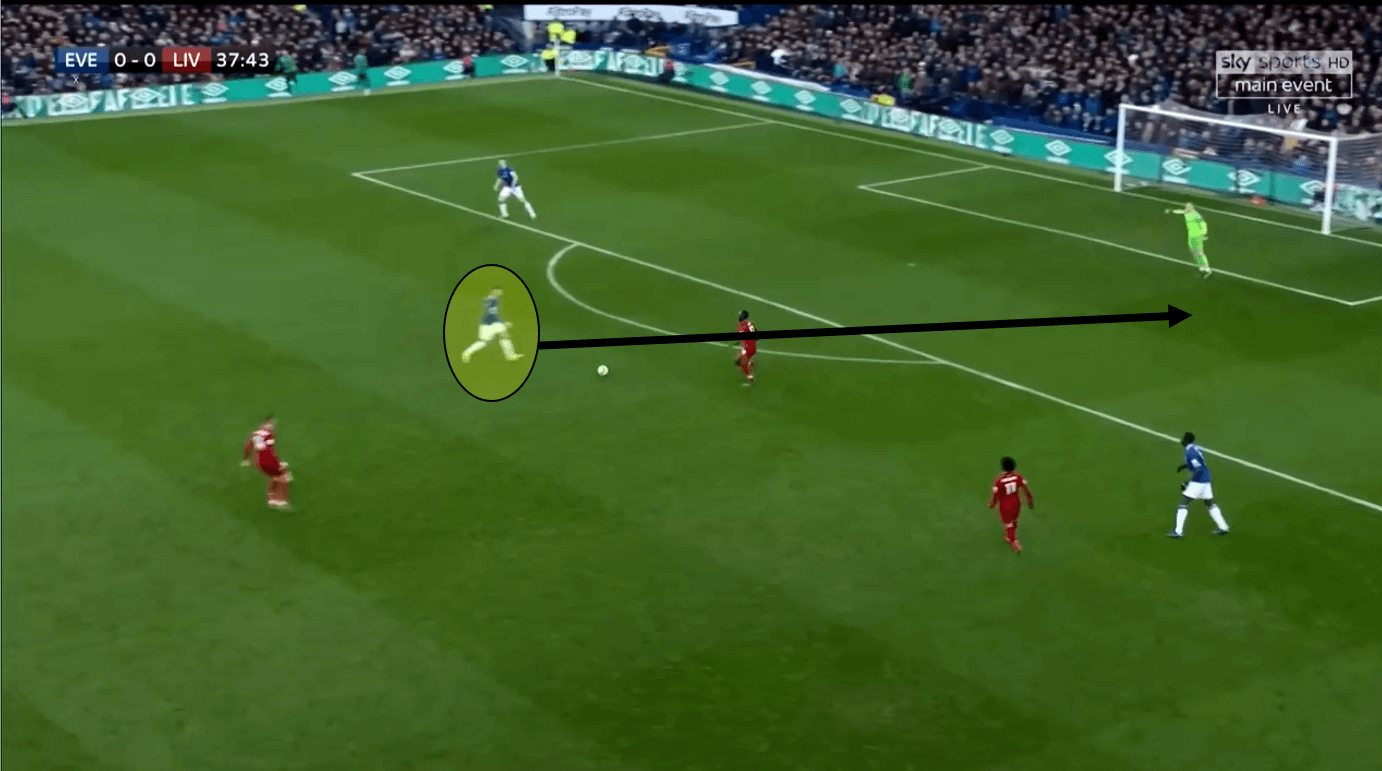 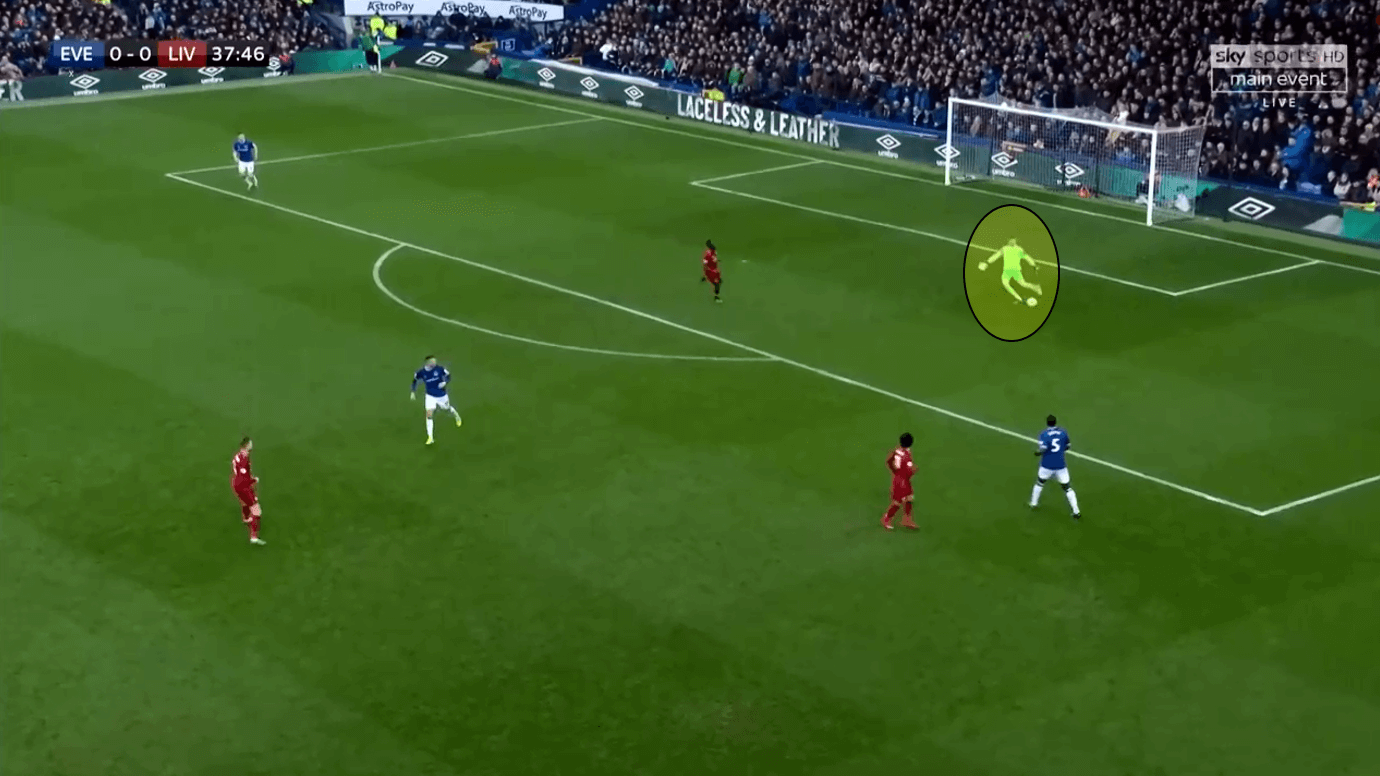 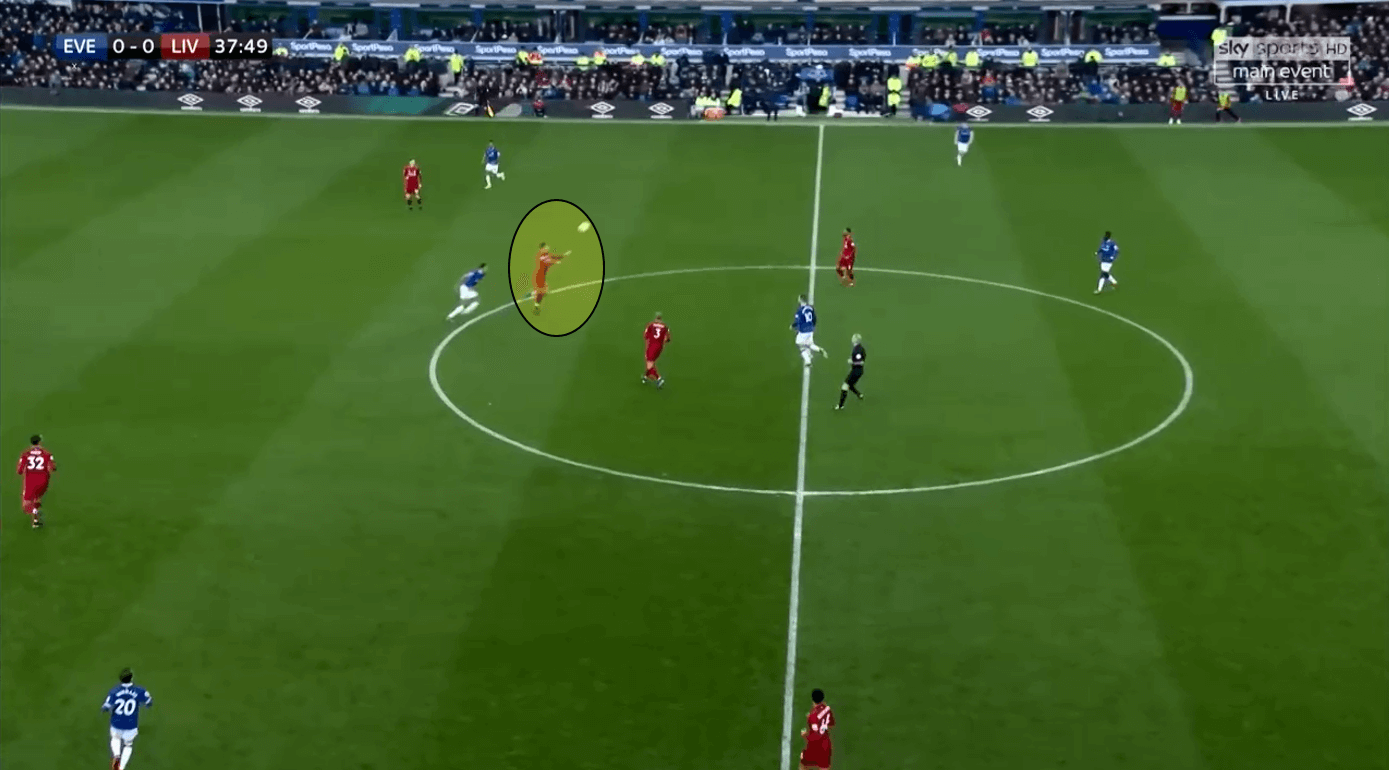 This pattern of refusing to turn repeated itself with Schneiderlin. He receives from Zouma and instead of turning and playing an attacking diagonal to Gueye, he jabs the ball back to Zouma. 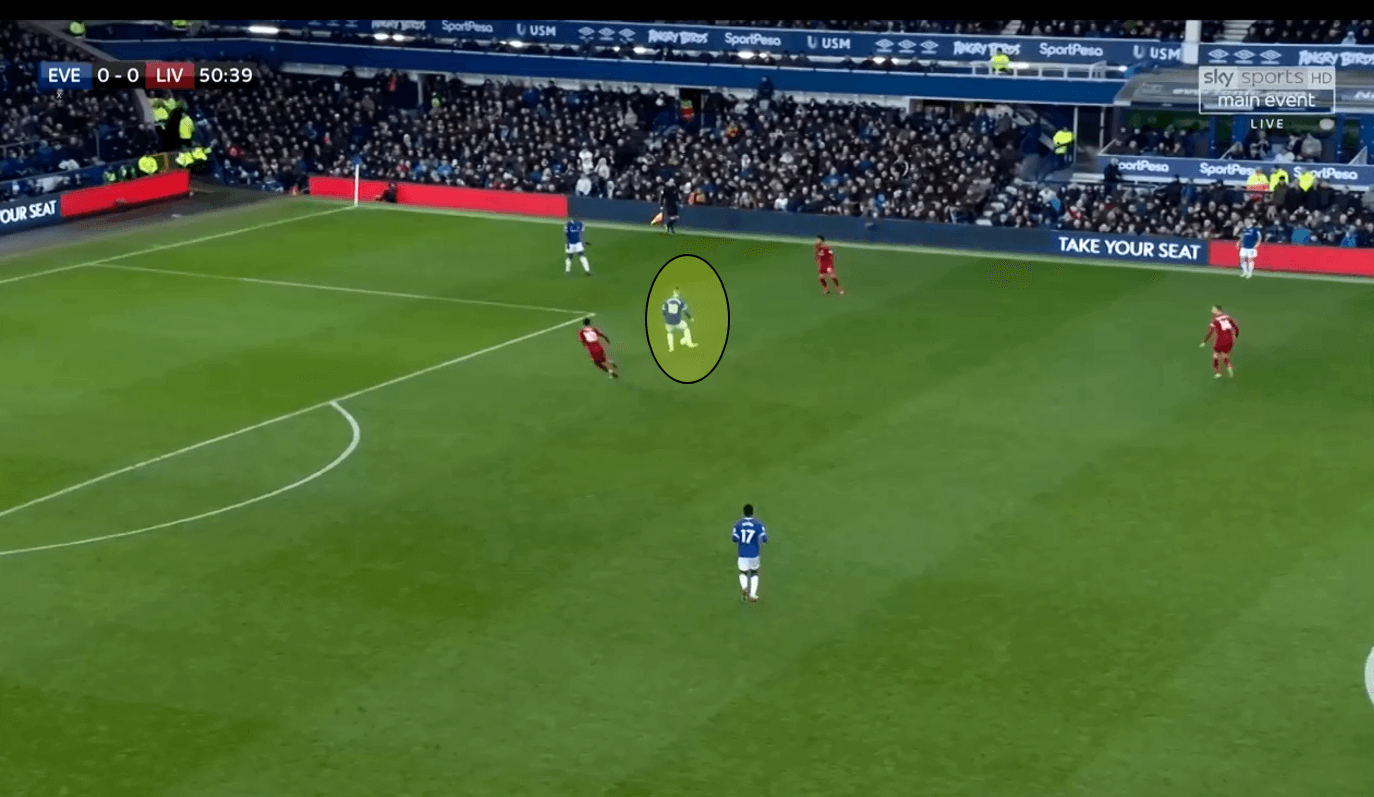 Below is another example with Gueye. In the Premier League, this is acres of space for a midfielder. Instead of turning and attacking, Gueye plays back to Keane. 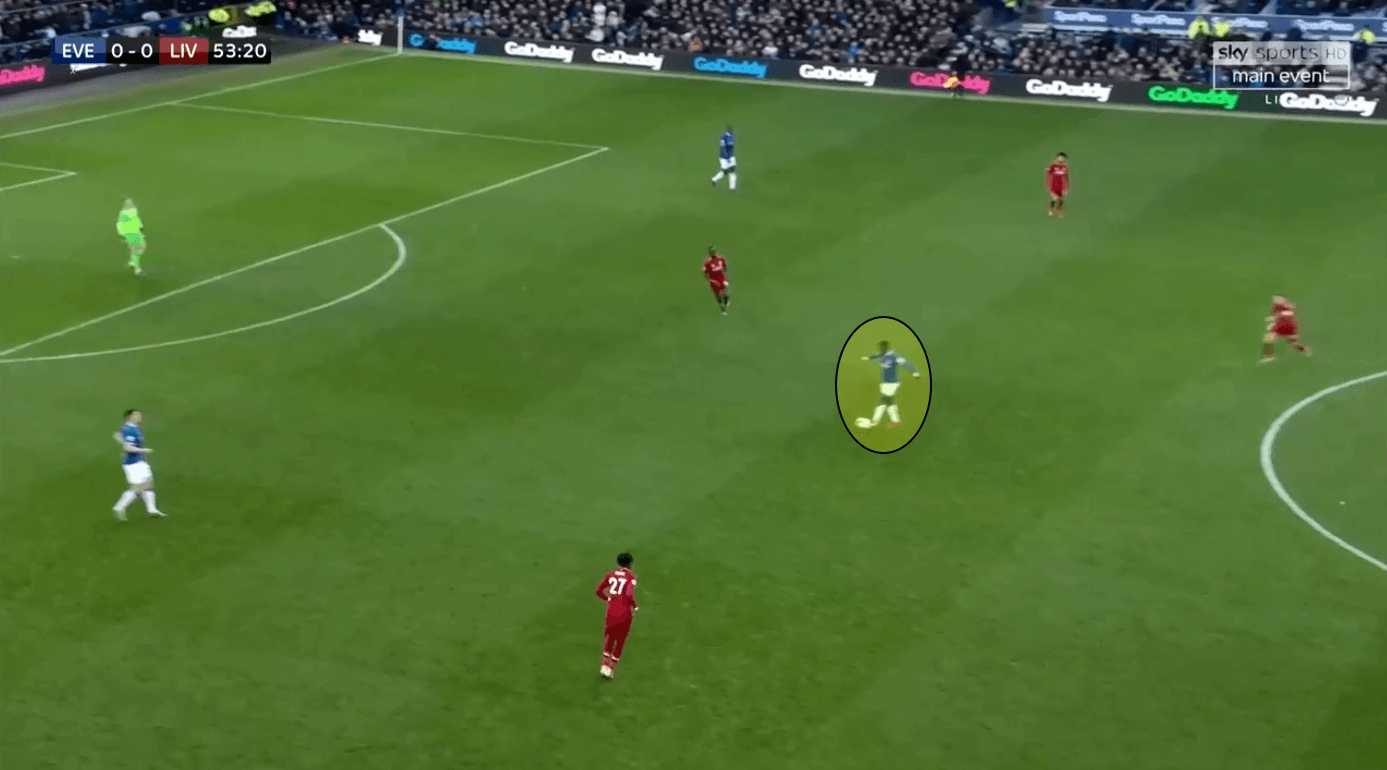 The Everton midfield duo’s absolute refusal to turn when in space absolutely killed Everton’s attacking chances time and time again. In the 57th minute, Keane is literally pointing at Gueye to turn and go the other way. Keane’s instruction is not heeded. The play ends with another back-pass and aimless long ball won by Van Dijk. 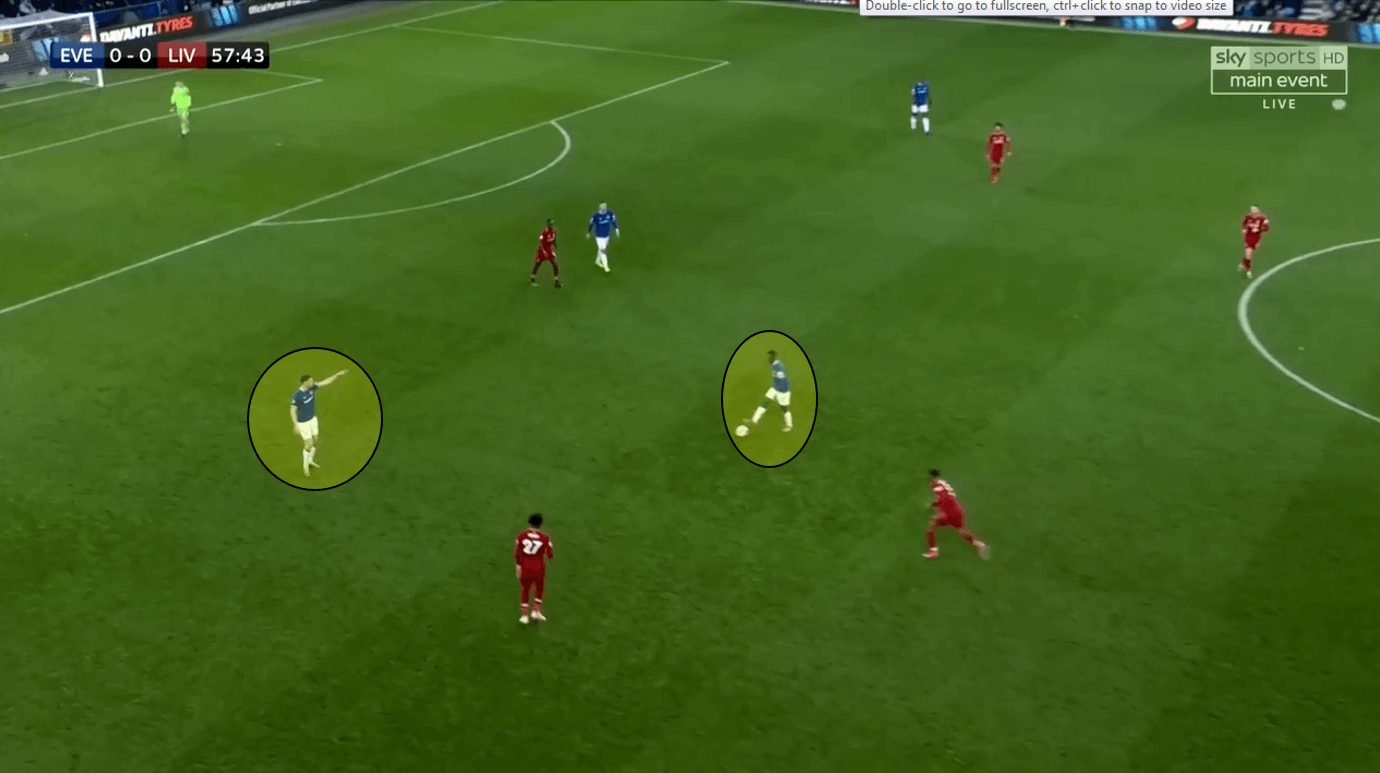 Everton gift Van Dijk the man of the match

According to whoscored.com, Everton had a scant 18% of attacks through the middle of the pitch. Despite having ample time and space to attack into, they did not take advantage.

Instead of attacking through the lines into feet in the middle of the field, they opted instead to play aerial balls into the Liverpool back line. According to sofascore.com, Everton played 80 long balls and only completed 23 of them. Pickford had 41 long balls and Keane had 10. They completed seven and three of those long balls respectively.

Van Dijk finished the match winning 12 aerial duels, three interceptions, and 13 clearances based on whoscored.com statistics. Everton’s strategy to play long balls into the Liverpool back line allowed Liverpool’s best defender to be the most influential player on the pitch. The Dutchman relished the opportunity by easily breaking up the long ball attacks. He was universally the highest rated player from the match.

Finally, in the 72nd minute, Everton played to feet in midfield. The attack starts with Coleman playing a penetrating pass into a checking Calvert-Lewin’s feet. 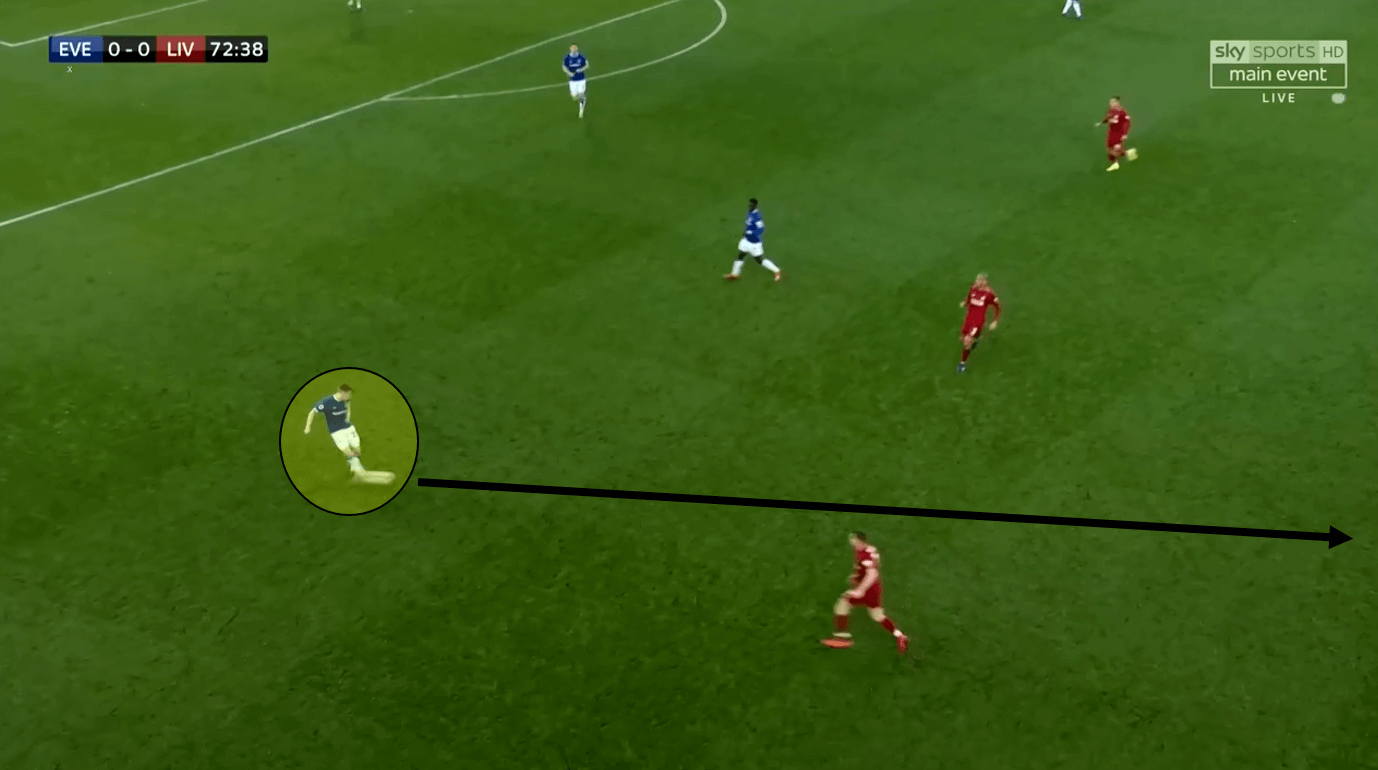 Calvert-Lewin receives between the lines with Van Dijk stepping towards him. The penetrating pass into his feet allows him to turn and complete a pass. It also draws the dominant Van Dijk out of the backline. Calvert-Lewin turns and quickly plays the second half substitute Richarlison into the channel. 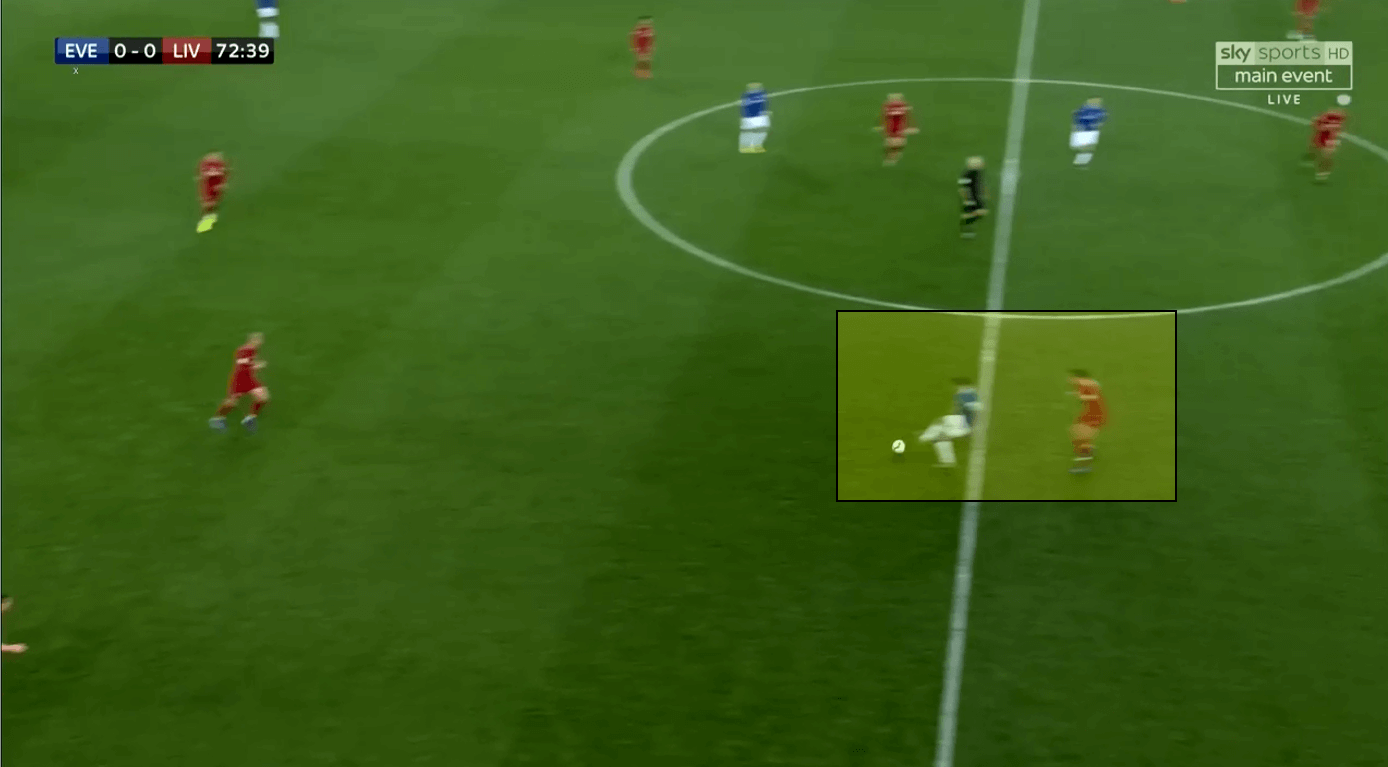 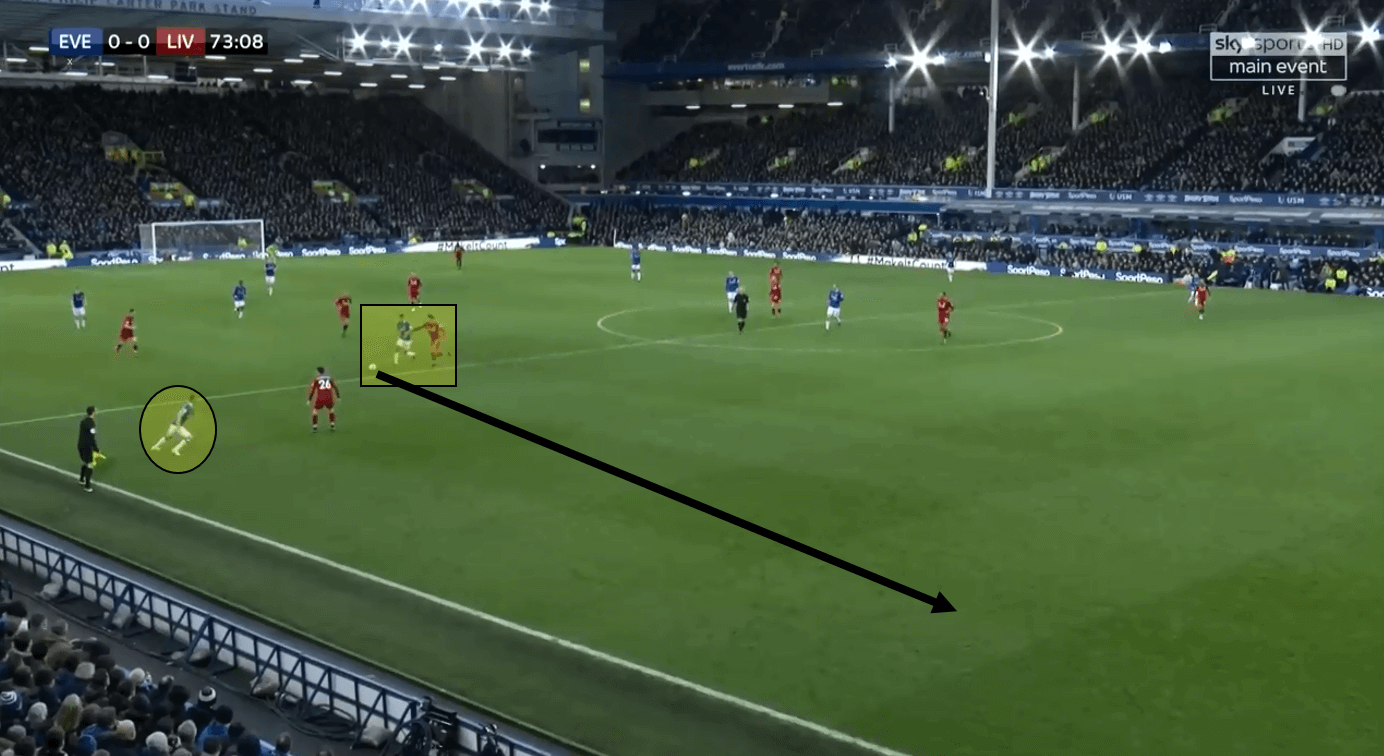 Richarlison gets in behind the defence and squares just in front of a lunging Bernard with Van Dijk way behind the play because of the build-up through the lines. 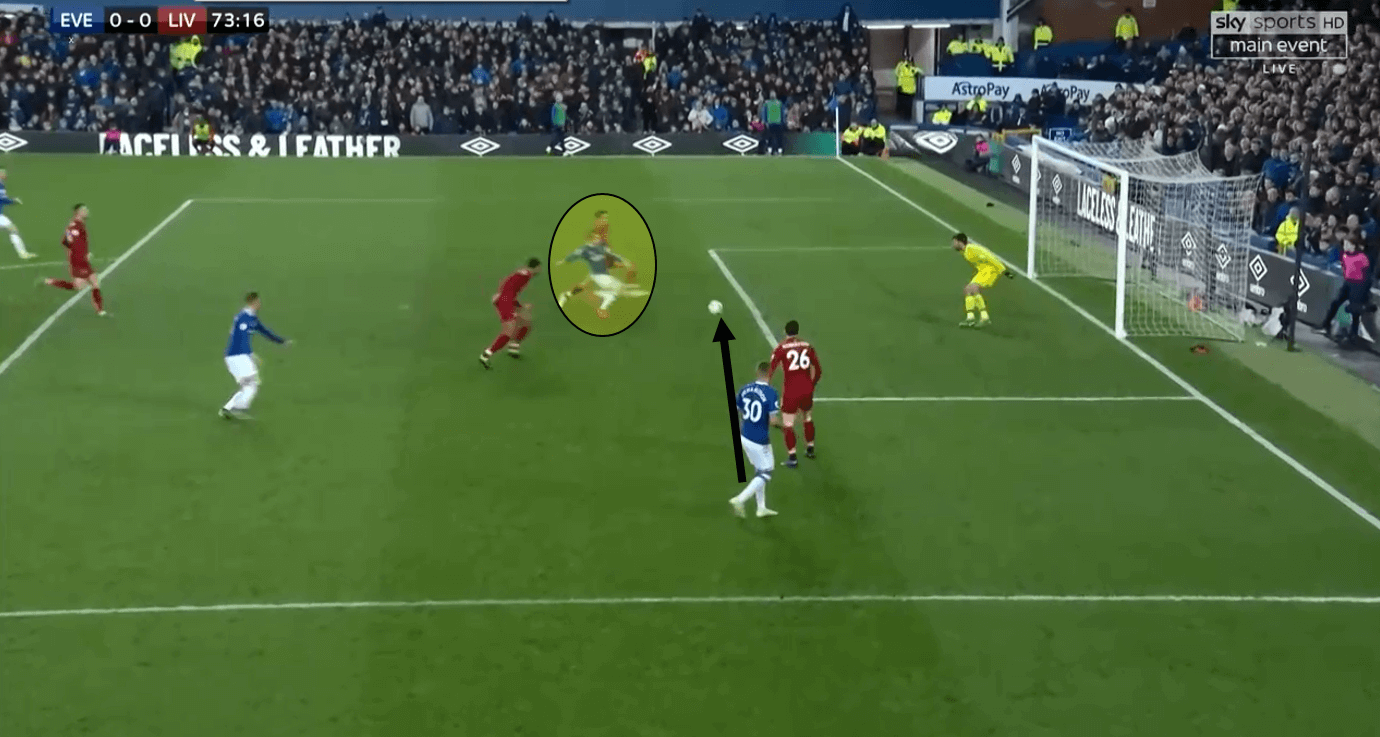 It took an astounding 65 minutes between the first successful attack played to feet through the midfield and the Richarlison attack.

Liverpool’s poor execution in the final third opened the door wide open for a Merseyside derby upset. Everton failed to pounce on the opportunity because of their unwillingness to play through the lines. Four times Everton received in midfield, turned forward and completed a pass.

Each of these four times resulted in a dangerous play into the box. Everton absolutely failed to have attacking confidence through midfield. They settled way too much in attack. Everton’s tactical strategy allowed Liverpool’s most dominant player to be the most influential player on the pitch, which is almost always a tactical mistake.