The 2021-22 Champions League is back again after the final international break of the year. The 5th week of the group stage features some interesting reverse clashes with PSG travelling to Manchester City being the headline one of the lots.

PSG have had a very tough start to their season despite bringing in some exciting talents and possibly the greatest of the game in Lionel Messi. Pochettino has struggled to get the best out of the team and fit all of his best players with proper tactical identity.

Manchester City, on the other hand, are slowly gaining ground in the league and are closing the gap to league leaders Chelsea after an impressive win against local rivals Manchester United in the derby. Both teams would be looking to clinch the group with just one point separating them.

This tactical preview features the analysis of the team’s tactics and how either team go into the match from a tactical standpoint. Let’s begin the preview.

PSG under Mauricio Pochettino are regarded as the best team in Europe on paper headlined by a forward trio having possibly the greatest player in history, one of the best players of his generation and the best U-23 player in the world. They are also coached by one of the most promising coaches in the world while also acquiring the likes of Hakimi, Wijnaldum, etc to possibly construct the best squad on paper in Europe.

In the first fixture between the two clubs where despite PSG winning the game, Man City were able to suffocate PSG and their build-up to a very large extent. They deployed a heavy man-man pressing against their opponent where the front players were all closed down immediately. 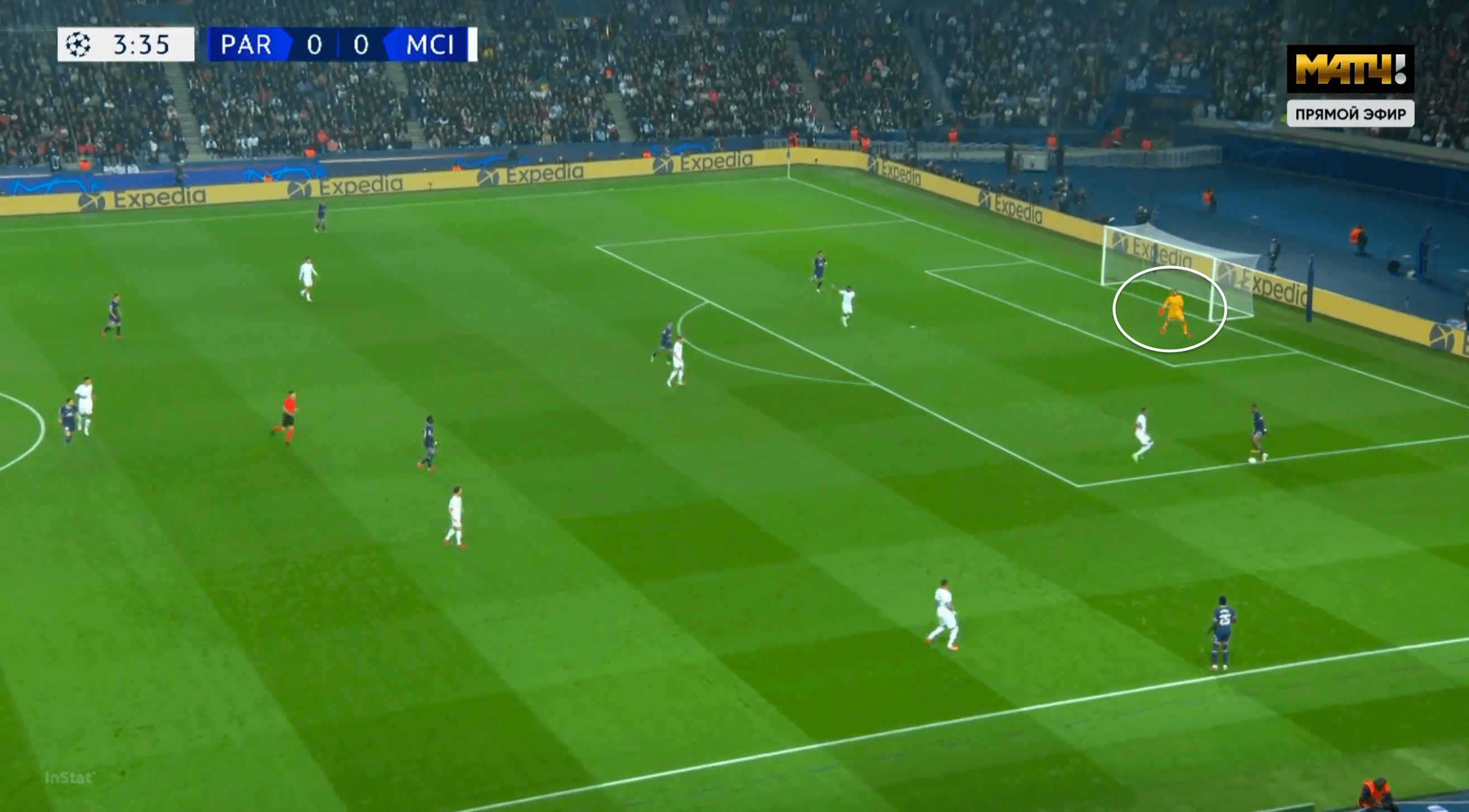 The issue in the above image that PSG had were they were also subjected to Man City’s press was the use of the Keeper in the build-up here. Donnaruma is very good on the ball and PSG didn’t look to use his skills to play out of the press. Especially dragging City to one side and a pass to him would have ensured a pass from him to the opposite full-back, in this case, Hakimi as City have been dragged to one side of the pitch.

The issue was even more escalated against Leipzig where they specifically targetted Danilo’s lack of ability in build-up compared to Verrati. There were multiple times that Leipzig were able to turn the ball over due to this very high up the pitch and PSG survived on many occasions. We can see an example of that below where Danilo has dropped deep to receive the ball but his body angle doesn’t aid him to receive and turn immediately with two Leipzig players in close proximity to him and to take the ball away from him. 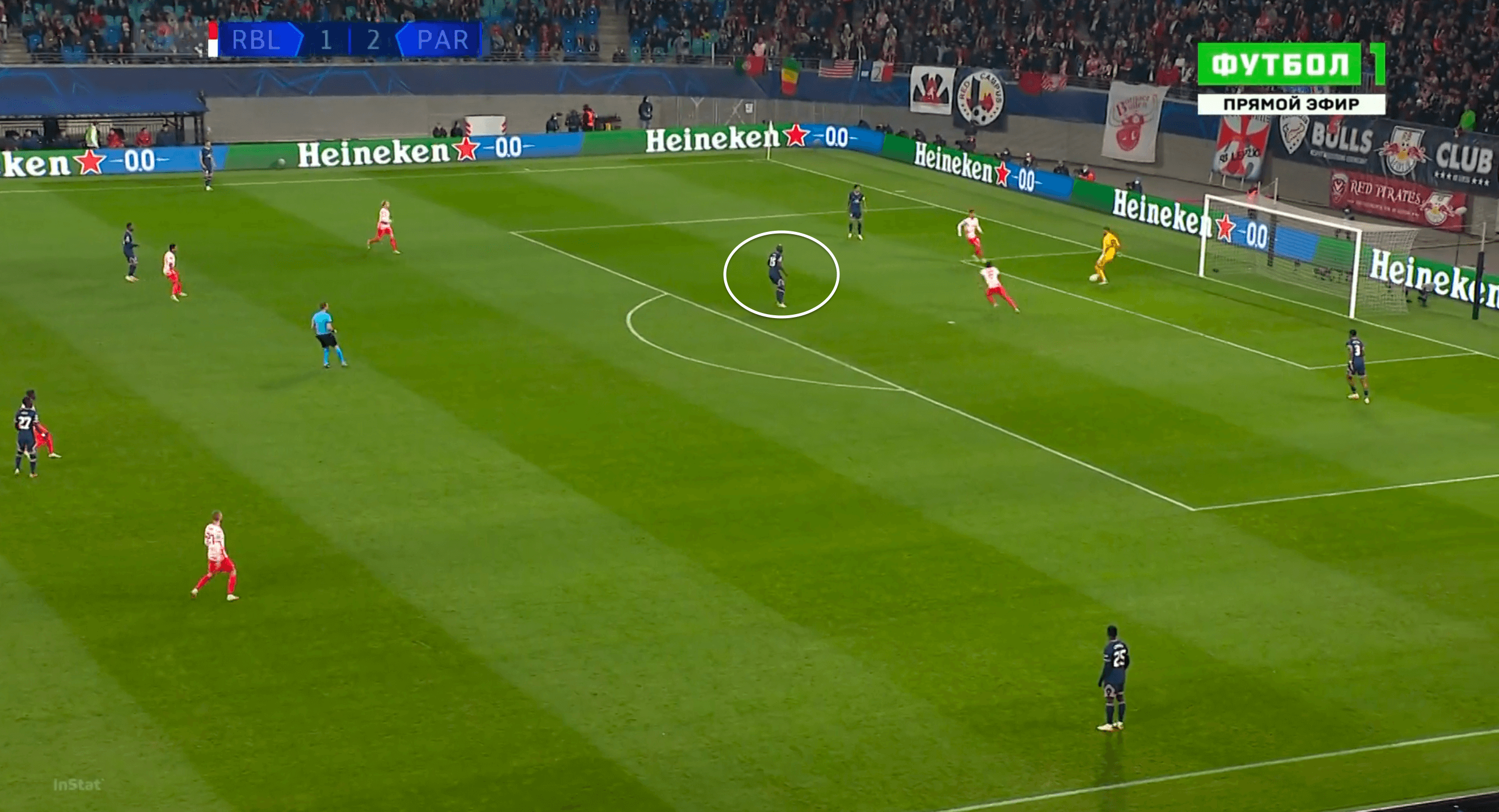 This is something that Verrati was able to mask with his technique where he would receive the ball at right angles as well as carry the ball into the space forward in numerous instances. Pochettino not using another midfielder to drop deep and aid Danilo in the previous example made it very difficult was PSG to play out from the back.

Also, his spatial awareness was something that helped PSG very much in their game against City but missed the same against Leipzig. We can see in the image below where he senses there is a space ahead of him and when the KDB steps to press he moves into the space and offer himself as a passing option to Hakimi. 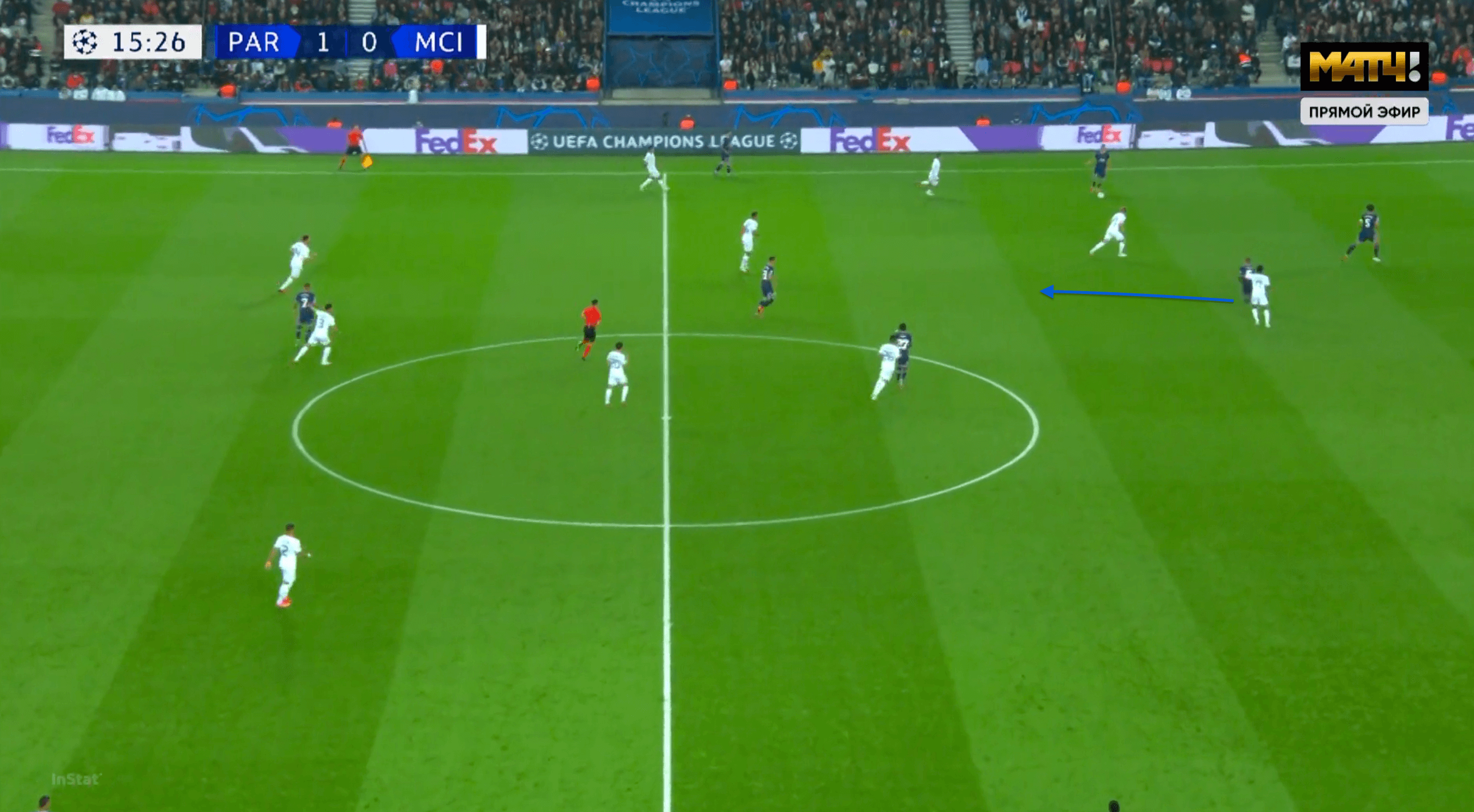 His gravity on the pitch did drag City a lot around the park in the first game where he was able to move and create spaces around the pitch. With his ability to ping passes from deep regions, City wouldn’t afford to keep him free and always look to have a man against him. This could create gaps in the midfield when he drops dynamically (when moving) like in the image below where his dropping forces KDB to press him and with the midfield line pegged back there is a huge space for Gueye to receive the ball and switch it to the opposite flank. 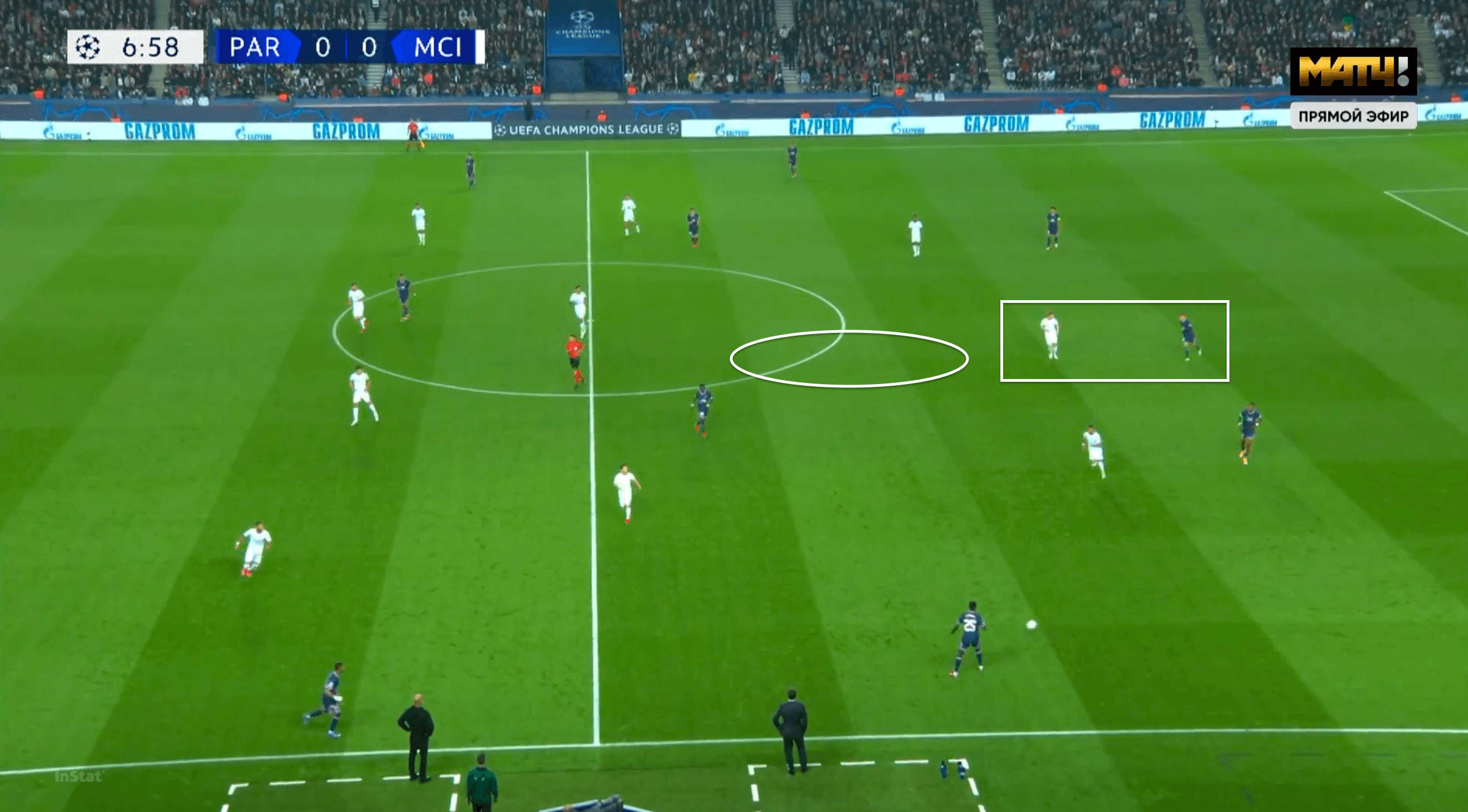 The issues for them were much more amplified in the Leipzig game where Marsch’s side played a ball-oriented pressing where they overloaded the ball-side and if PSG weren’t structured they wouldn’t be able to beat the press and move forward. We can see that in the image below which has an example of PSG in a very poor structure in the flank without proper staggering between players. All the 3 players are in the same vertical line and very close to each other which makes it easier for the Leipzig players to press as they have closed the passing lanes. But another problem here is the lack of a proper counter-pressing structure and if PSG loses the ball they would have 5v5 or maybe even 5v4 against the PSG defence. 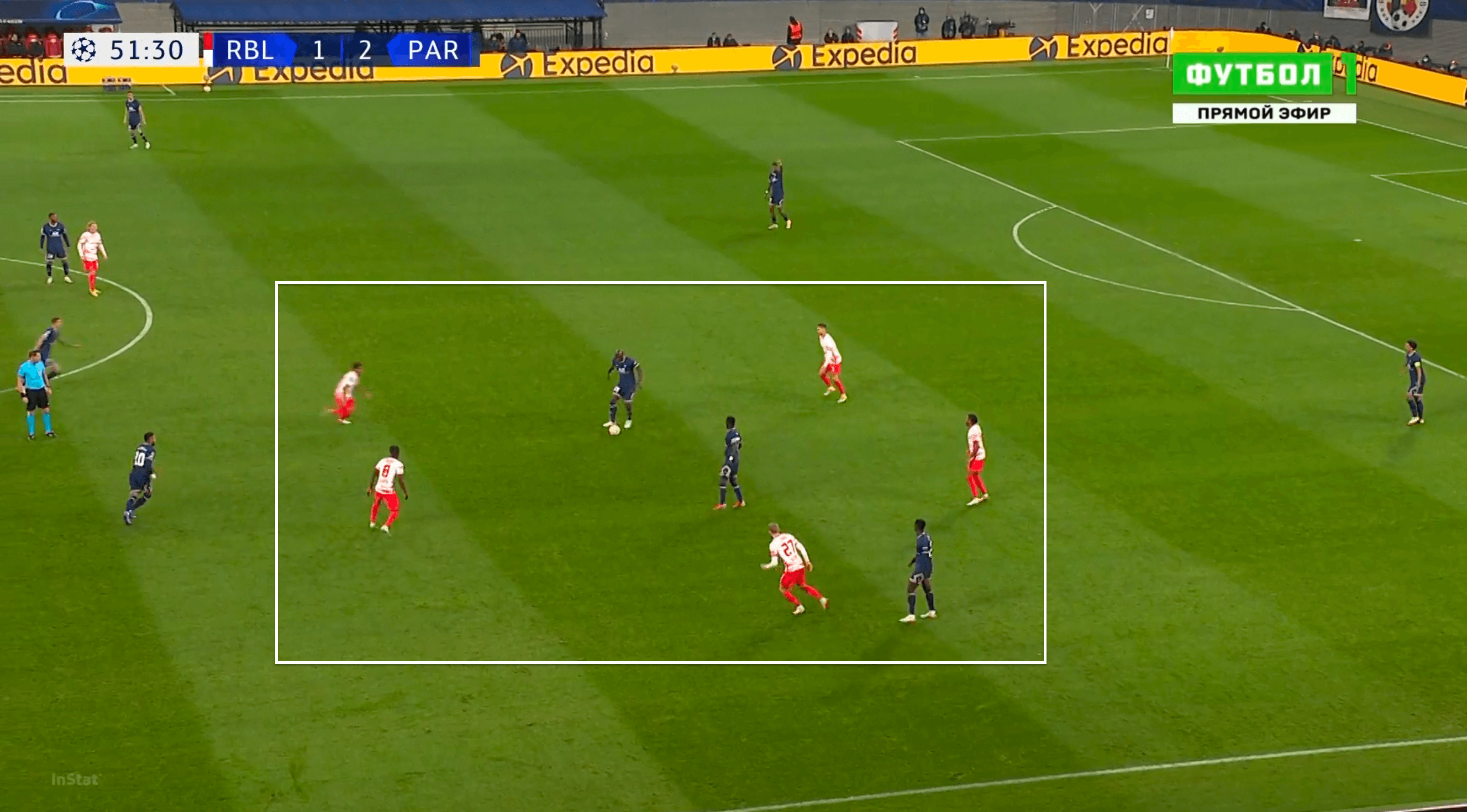 PSG would have to ensure that they have a proper player to play as an anchor when they move the ball to the wide flank as City even in the reverse game tried to play ball-oriented pressing and looked to stop the ball from progressing. In the image below against City, we can see how a lack of an anchorman to the players in the flank made it difficult for PSG. The key to break ball-pressing is to quickly look to switch to the far-side that would expose the entire defence of the opposition. 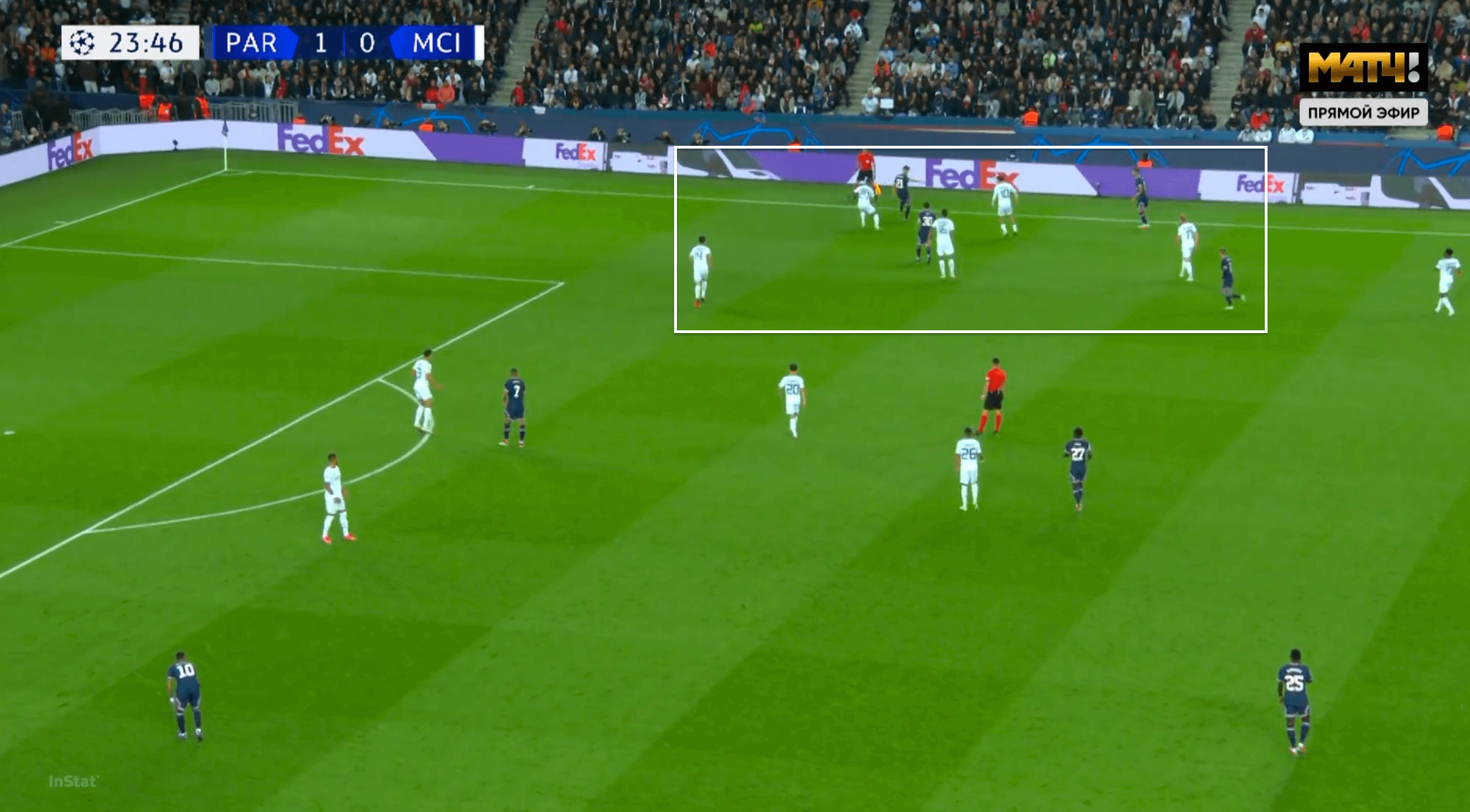 Another example against Leipzig shows a good way where they have an anchorman around them but due to other players not positioning better or keeping themselves in wrong angles they are not able to play to him and move forward. 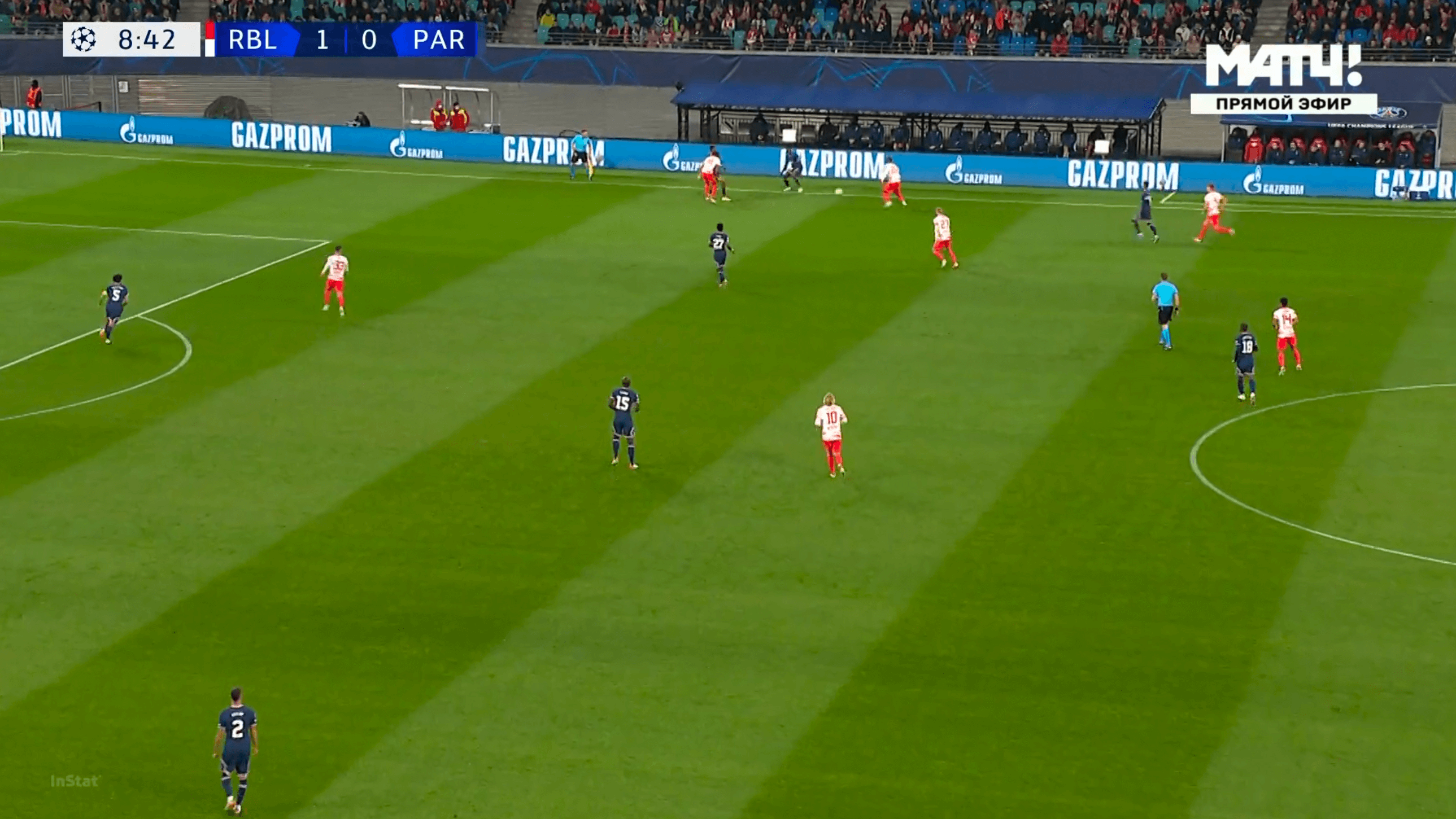 If PSG needs to do a double on City they would have to rely on their front-3’s quality to bail them from the structural issues they have and not having Verrati in the game will be very much felt as Danilo would not provide the same that Verrati tends to bring to the side.

How will Pep Guardiola approach the game?

Pep and his team have always looked to assert themselves no matter who the opposition is. They have always set themselves in a 2-3-5 / 3-2-5 system with the wing-backs inverted and used in the centre.

In the first game, City found a lot of opportunities to overload the PSG backline with their forward and even managed to create a 5v4 situation numerous times. The wing-back would swing themselves from centre to the wing and vice-versa which means that the likes of Neymar or Messi (wingers) would have to adjust their body positioning every time and in a correct way. This would put them in a dilemma where wither they would have to move toward the wing-backs to cover the centre so that the inside wingers won’t receive the ball in the half-spaces. If they chose to stay centrally then City would use double spacing in the wing and move the ball forward. 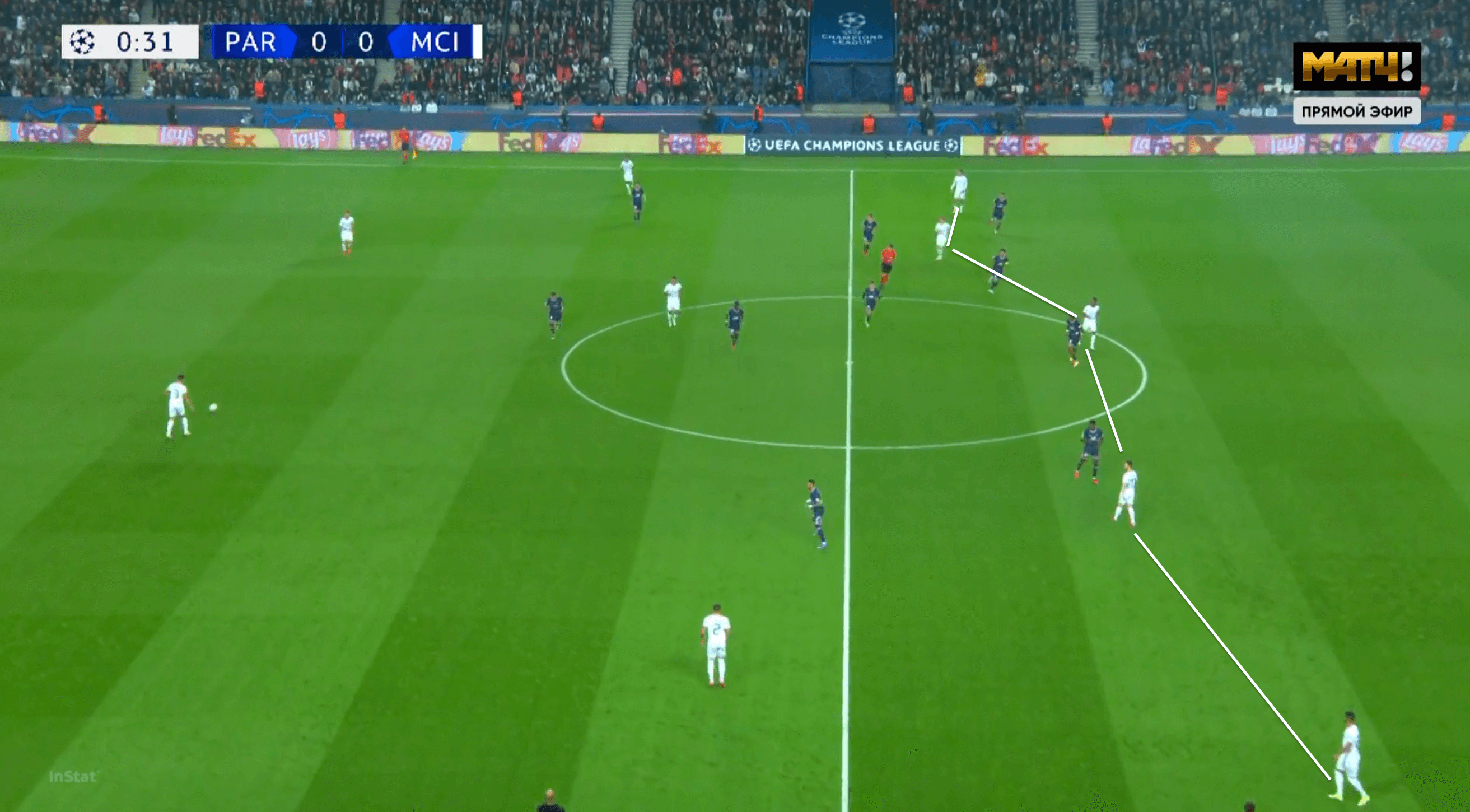 But PSG mostly prioritized defending the central areas and will look to do the same thing in the next game. In the initial stages, they set a man to mark Rodri closely to ensure that City does not directly progress the ball with him. Messi or Wijnaldum took turns to do the job in the reverse fixture and it will most likely be the same in the upcoming game too. 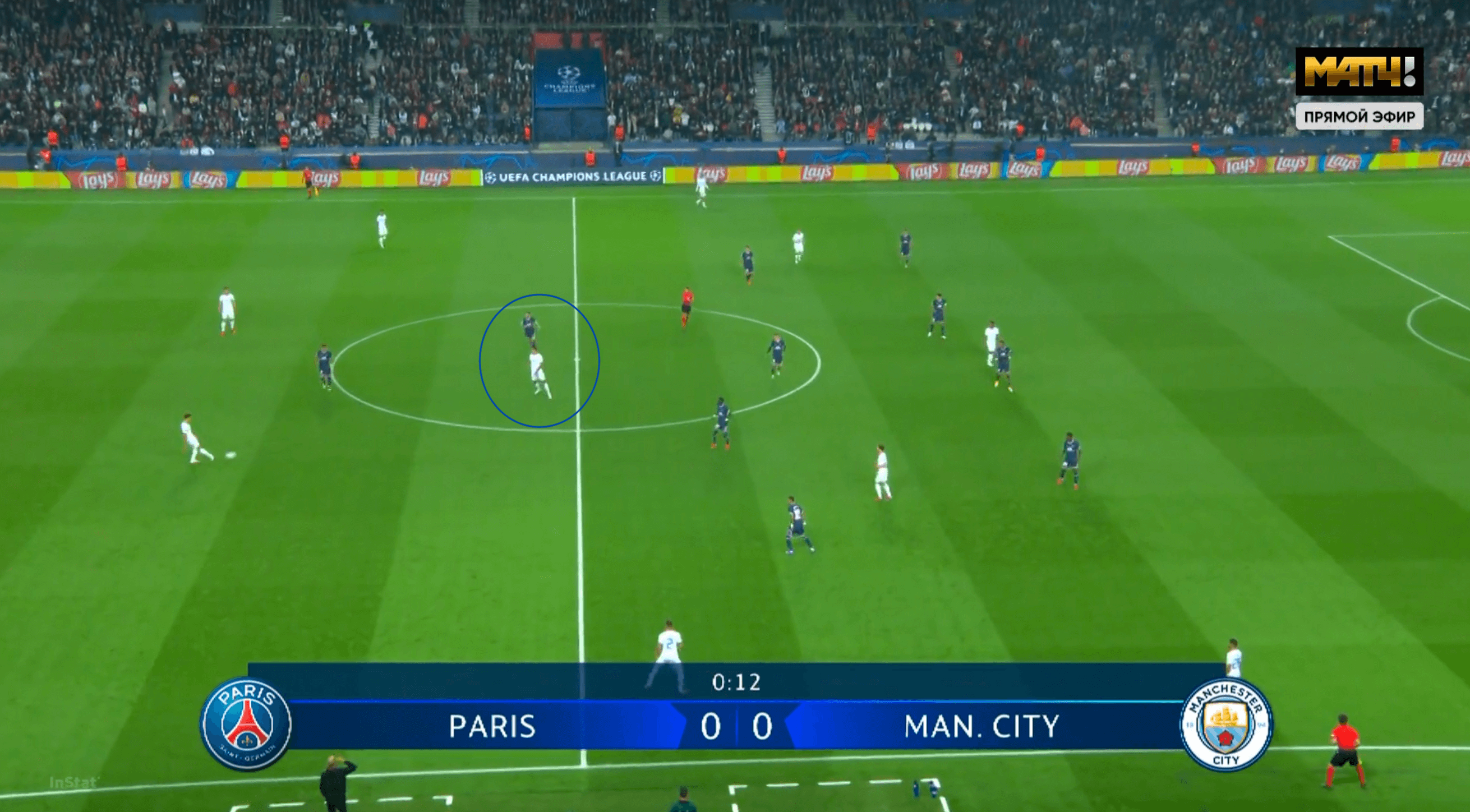 Laterally stretching the PSG defence would not be a very hard task given that they play a flat back-4 and their front-forwards stay a tad higher for the counter-attacks. This means that Man City can position their wingers very high and wide like how Leipzig did in their 2-2 draw against PSG and a switch would be possible to the opposite flank in a much easier fashion. 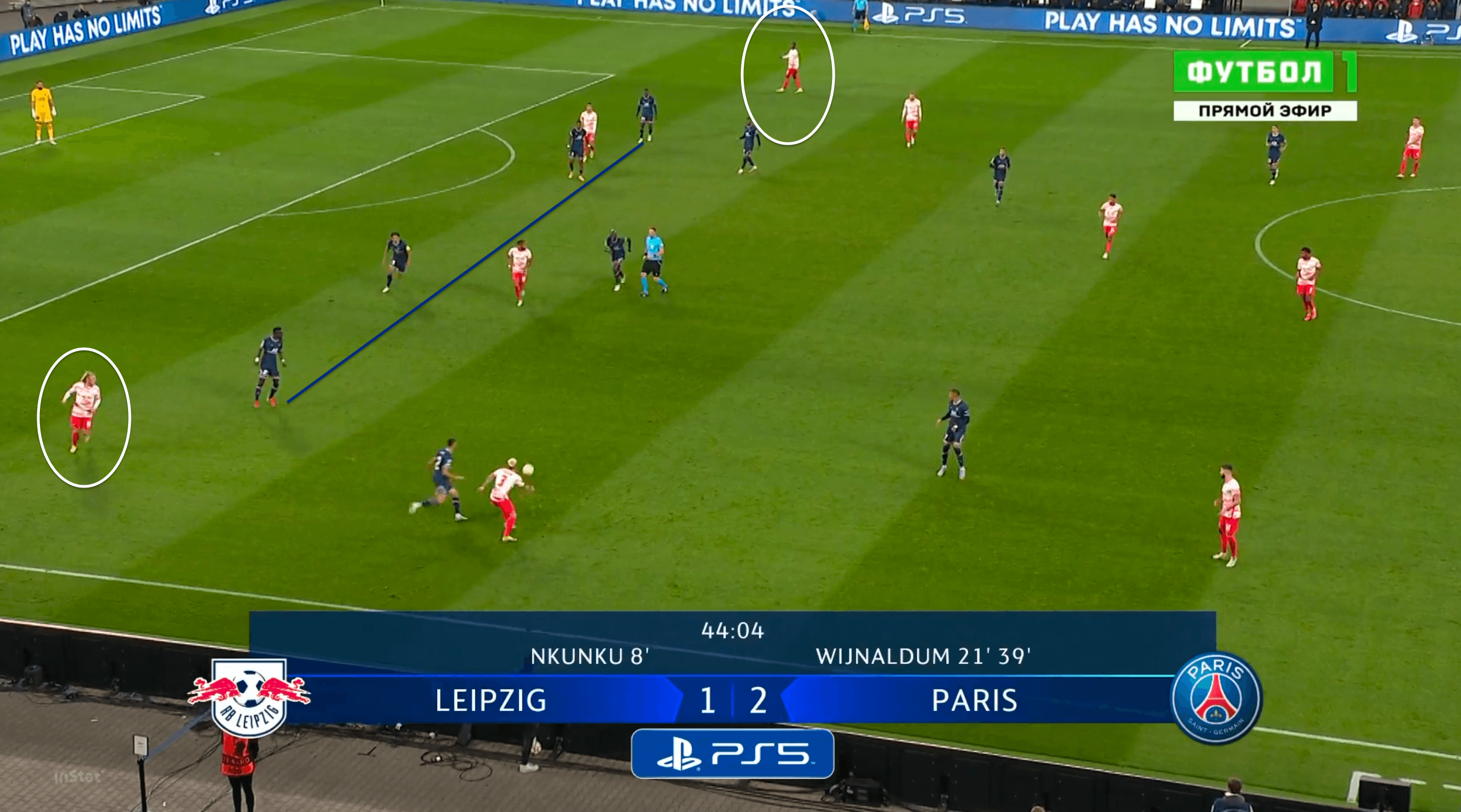 Pep has used some constant faces in the Champions League this season with Mahrez, De Bruyne playing the bulk of the games while the likes of Grealish and Sterling also featuring. The dynamics between Mahrez and Silva on the right flank have been very good for City and Pep would be using that again in the game.

Grealish meanwhile has also done well in the Champions League and has been a constant starter in the left-wing for his team. His gravity could be very vital for the team and even in the reverse game, he was able to create constant troubles to PSG with his gravity that opened spaces for his teammates. We can see an example of that in the image below where two players have gone out to defend him that opens space for KDB just outside the box in the half-space. 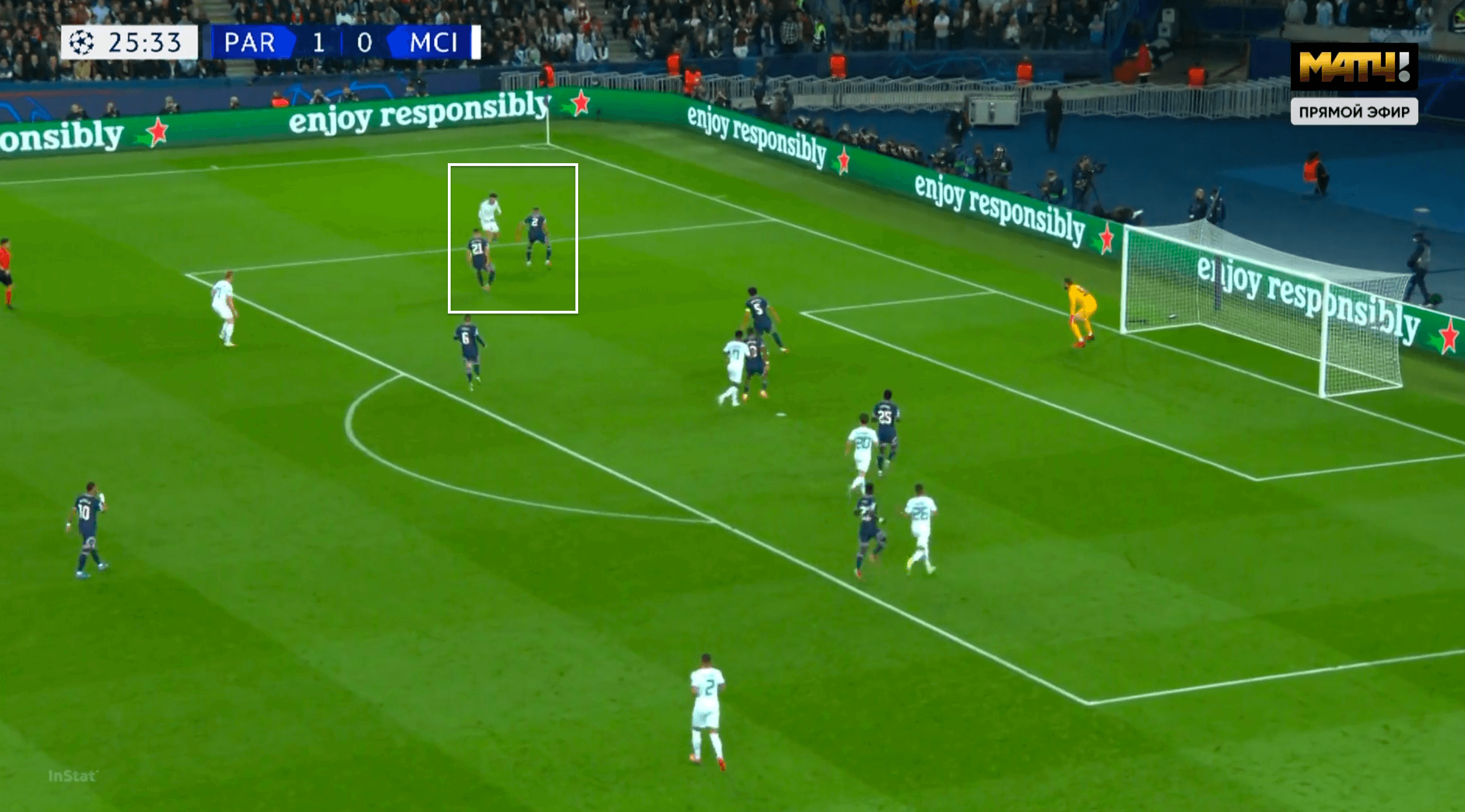 Unlike Mahrez, he is not someone who makes runs constantly and attacks the box without the ball, which could probably make City much more threatful if the attack down the right-flank when Mahrez has the ball and PSG are attracted to him that can cause blindside runs to be made. We can see how PSG are focused on Mahrez and Grealish is left free on the far post. He can choose to make a very good blindside run but he doesn’t as he is more of a ball-to-feet player. 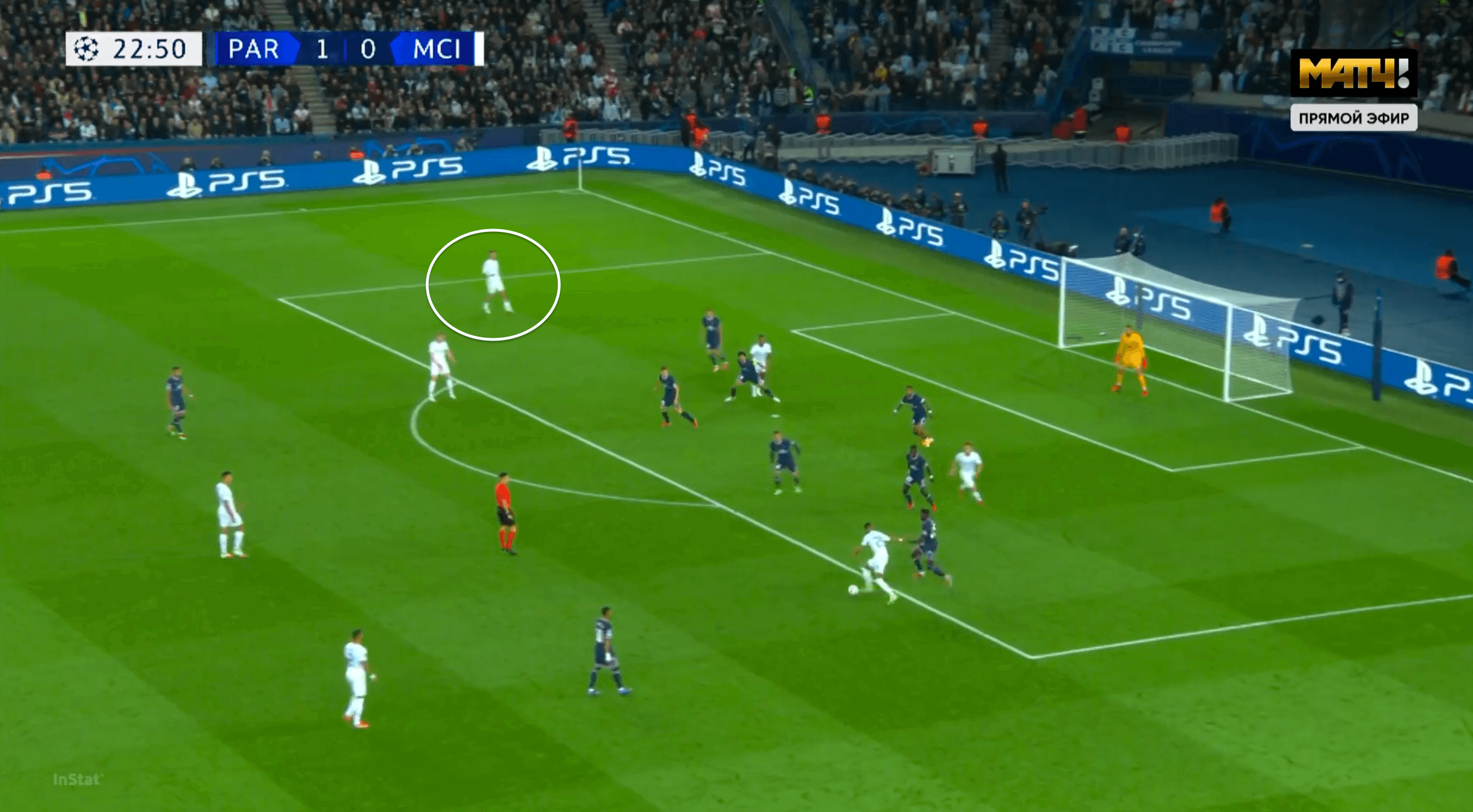 Pep should also be worried about handling the front-3 again as all of them possess the immense quality to change the game by the scruff. The movement of Mbappe can be very vital for PSG as that might drag defenders away from position opening space for Neymar and Messi to operate like in the image below. 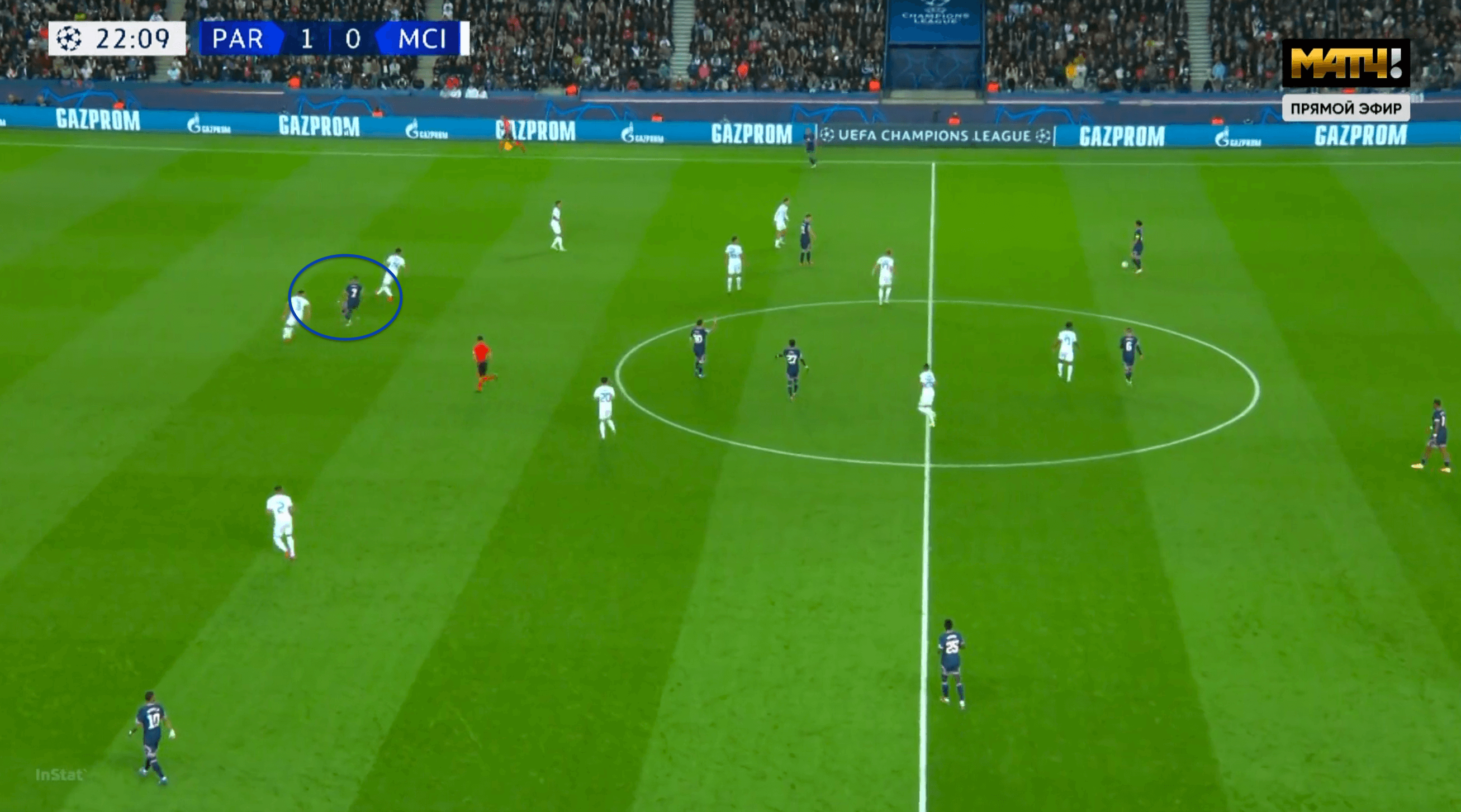 It will be another interesting clash between both teams possessing some of the best players in the world. Man City with their home advantage will look to get one over PSG this time while Pochettino and his men would look to do a double and potentially look to win the group. 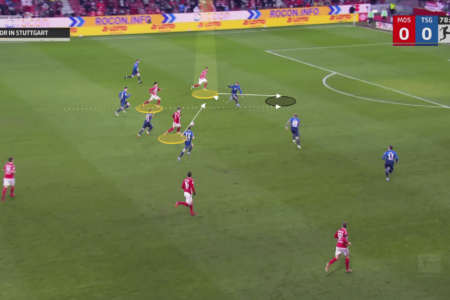 Karim Onisiwo is a 29 year-old Austrian centre-forward currently playing for Mainz 05 in the German Bundesliga. He had played […]