Liverpool and Arsenal meet on Saturday in one of the most interesting Premier League games this weekend. Both teams will be fighting for the three points as they go out in a direct battle for third place, being now two points apart in the table.

Jürgen Klopp’s side are currently the most efficient team in attack with 31 goals, while the Londoners, who previously struggled in possession, have scored only 13 goals and are just starting to improve their attacking movement. Mohamed Salah is having an impressive campaign so far being the club’s leading goalscorer (10), while also being the player with the most assists (7).

The situation in defence, though, is quite similar for both sides as the Gunners have conceded two more goals (13) than their opponents (11) and have shown consistency with their newly looking back four. The heroic actions of the keeper Aaron Ramsdale put them in a better position defensively and the team are now unbeaten in their last eight PL games.

Liverpool on the other side were undefeated until the 11th round when they lost in a dramatic game against West Ham and are now motivated to get back on track with a win against Mikel Arteta’s side.

Expectedly, Liverpool are the favourites as their explosive attacking actions and their balanced defence are better prepared and could easily expose Arsenal’s weaknesses. But do the Londoners have chances at all?

In this preview in the form of tactical analysis, we will examine what tactics might be successful for Arteta against Klopp in his aim to limit their attacking movement and expose their defence.

It is expected that the teams won’t look much different from their last week before the international break and the managers will make minimal changes.

Defensively, Liverpool will go out with Alisson on the goal and a back four of Andrew Robertson, Virgil van Dijk, Joël Matip and Trent Alexander-Arnold. In midfield, Klopp might opt for one change and replace Jordan Henderson with Thiago and again give chance to Alex Oxlade-Chamberlain and Fabinho in the centre. The front three will consist of Sadio Mané, Mohamed Salah and Diogo Jota centrally.

As per usual, the wide players will be key in Liverpool’s performance. The constant involvement of Robertson and Alexander-Arnold in attack and the team’s reliance on crossing increases their efficiency in front of the goal. The Gunners shouldn’t also underestimate Jota’s movement. It is expected that the Arsenal players will be focused on covering Mane and Salah, which would possess a great risk for them due to Jota’s technique and headed attempts.

For Arsenal, Aaron Ramsdale will cover the goal, supported by Kieran Tierney, Gabriel Magalhães, Ben White and Takehiro Tomiyasu. Despite Nuno Tavares’ solid displays in the left-back position lately, it is expected that Arteta will rely on Tierney should the Scot be available after his injury.

In midfield, Sambi Lokonga will start on the left, while the best-case scenario for the right will be Thomas Partey who is expected to be back after injury. His presence would be very important due to his impact both in attack and defence. He is still doubtful, though, meaning Arteta might rely on Ainsley Maitland-Niles again.

Alexandre Lacazette is expected to start in his new role behind Pierre-Emerick Aubameyang where he successfully uses his strengths and seems most efficient in.

The full-backs’ defensive performance will be very important for Arsenal. Tomiyasu has so far been one of the team’s best performers, but the game against Liverpool will be a real test for him, with the frequency of their attacks through the flanks. On the other side, both Tierney or Tavares might struggle with limiting Alexander-Arnold’s movement and they will need additional support from each line to be able to close out spaces.

Smith-Rowe is expected to have a key role in attack in partnership with Lacazette, as the Englishman’s positioning and Lacazette’s successful play with his back to the goal could be the main sources of creativity for the team.

Can Arsenal counteract Liverpool’s use of the flanks?

As mentioned, it will be very difficult for Arsenal to limit Liverpool’s use of the flanks. This will require a lot of support from the first two lines of defence out wide and in the early stages of their attacks and a lot of concentration from the centre-backs in the box.

Arsenal’s marking strategy has improved a lot since the start of the season and the players are much more considerate of their movement and how their awareness. Due to their formation and limitations in midfield, the defenders might lack support out wide, hence might fail in stopping the full-backs’ attacking movement. Focusing on their actions and marking the other players and trying to prevent the crosses from reaching their target might be the better idea.

The Londoners need to have increased positional awareness and follow their targets tightly. Instead of focusing on the wide areas and risking leaving gaps centrally, the centre-backs need to stand their ground and step up against Liverpool’s experienced attackers. The White-Magalhães partnership proves to be one of the most solid for Arsenal in the last few years. They both don’t hesitate to challenge the opposition but also react quickly in moving the ball forward after gaining back possession.

As said, Jota’s movement shouldn’t be underestimated, and the Arsenal midfielders need to constantly be aware of the risk he possesses. He drops back to pick up the ball but also frequently moves into the box which is extremely threatening due to his through ball ability and strong finishing.

So the best way for Arteta’s side to cope with the attacks through the flanks is by making sure all other positions are covered and their positioning and actions in the box are up to standard.

This is also valid for defending set-pieces. Liverpool’s ability to take advantage of their set-plays is another threat that requires increased awareness and anticipation skills by the Arsenal players. This is another area where Alexander-Arnold excels. The Merseyside have scored six goals from set-pieces so far this season and it is safe to say that they utilise their chances. While Arsenal have only conceded twice from such situations this term, the risk is always greater when you have the most efficient attack in the league against you.

How can Arsenal threaten the opposition?

With Arsenal’s growing confidence in attack, they are expected to have their chances on the goal. Both youngsters Smith-Rowe and Saka have been in great form and have provided a great threat upfront. Smith-Rowe is the team’s best performer in attack now with four goals and two assists.

The Englishman’s attacking flair and positional awareness put him in quality positions to score, while his growing confidence on the ball allows him to hold on to it and finish the attacks in the best possible way. His 62.5% of shots on target make him the biggest threat for Alisson’s goal. His ability to combine with his teammates and Aubameyang’s improved movement back could be key for the team against Liverpool. 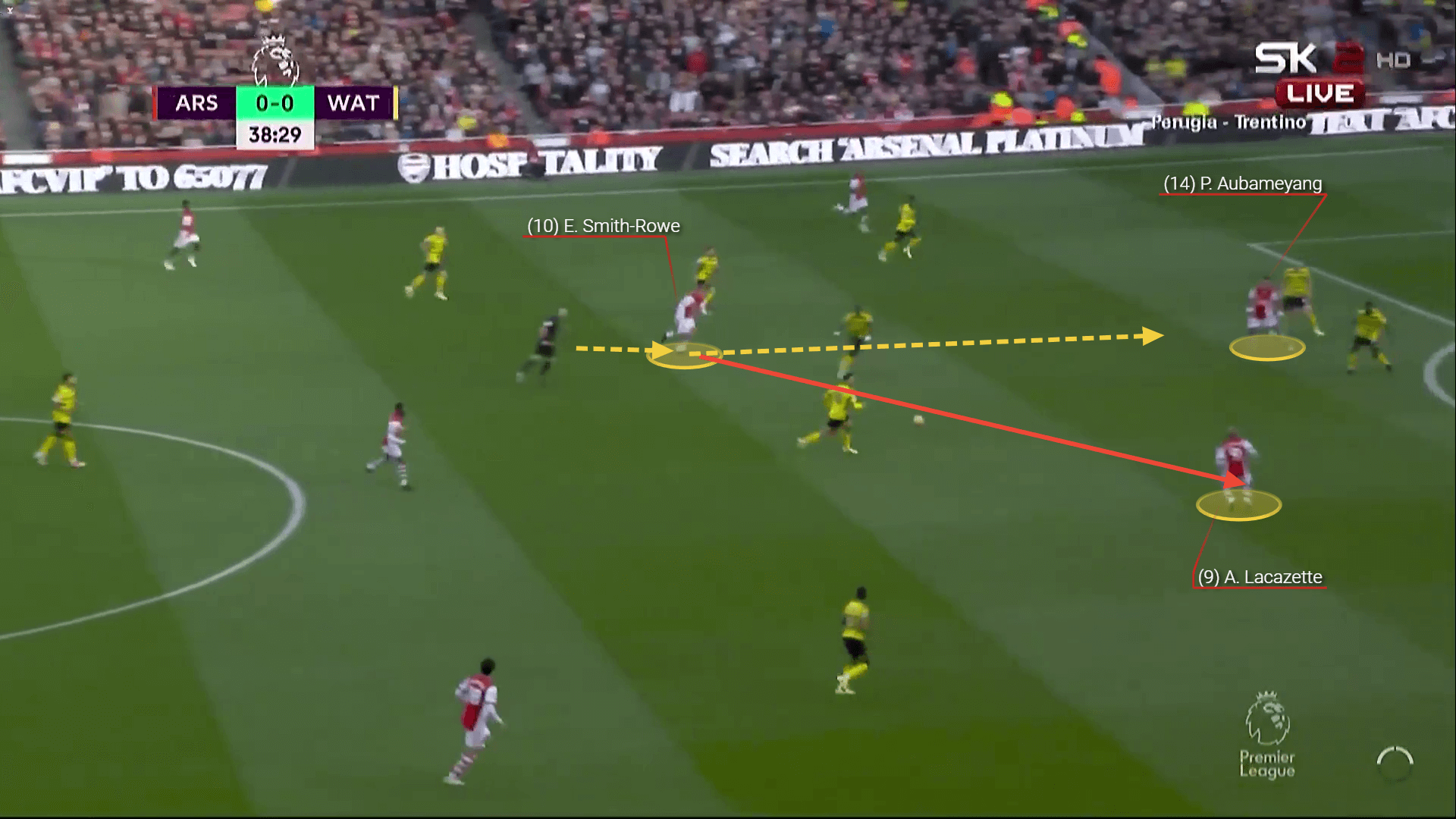 He then showed his flair by passing the ball to Lacazette and immediately starting his off the ball movement, trying to provide an option for a pass further.If they are focused enough, they could use Alexander-Arnold’s high positioning and easily exploit the spaces behind for creating chances. Lacazette’s ability to play with his back to the goal and hold on to the ball could also be fruitful for Arsenal as he could use his teammates’ strong positional flair to set them up in goalscoring positions. His presence could be a distraction for the opposition’s centre-backs.

Arsenal could also try to take advantage of their attacking set-pieces. The team have also scored six of their goals from their set-play opportunities and while Liverpool have been very solid in defending such and their positioning in the box is strong, Arsenal’s improved strategy might be beneficial and threaten their opponents.

Despite their chances for a win being low, there are a few tricks that Arsenal can use to make it more difficult for Liverpool. While Klopp’s side are better prepared in attack, Arteta’s growing tactical maturity could help the team to counteract in a better way and take advantage of their chances.

The Gunners’ starting line-up and their in-game changes will be crucial for their performance and the manager needs to carefully consider every move. Klopp on the other side has already created a team with a distinguished style of play who execute their game plans perfectly and the opposition need to put a lot of effort to distract them from their goal. 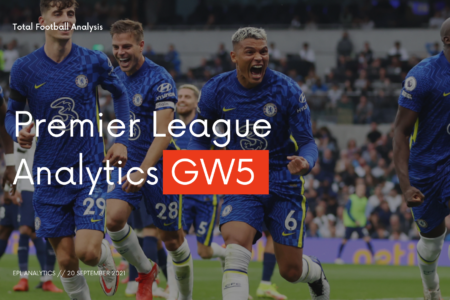 Good afternoon/morning/evening wherever in the world you are getting your analytics fix from today. We are so pleased to be […] 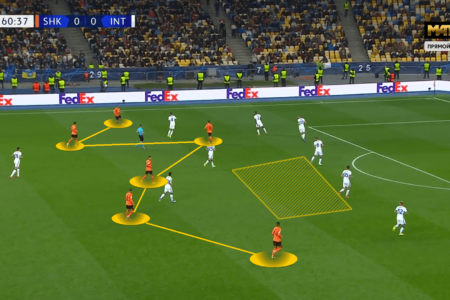