UEFA Champions League 2021/22: How Inzaghi’s Inter can cause Liverpool problems in the first leg – tactical preview

The 2021-22 Champions League is back with the knockout stages beginning this week. It is going to have a big difference with the away goals rule scrapped giving an interesting dynamic to the ties that end in a draw with respect to the aggregate.

The interesting tactical battle of this week is going to be between Inter Milan and Liverpool with the former hosting the latter in their home. Inter Milan have recently suffered a slight slump in form that saw them drop points against their title rivals AC Milan and Napoli. Liverpool, on the other hand, has done extremely well in the domestic games across cups and league, putting the maximum pressure as possible on league-leaders Manchester City. Jurgen Klopp would be hoping that his men carry their domestic form to the European stage.

Although Liverpool are the favourites going into this tie, Inzaghi would be looking to counter that and definitely would hope that his players give their opponents a run for their money.

This preview in the form of tactical analysis examines both teams’ tactics and how Inzaghi could grab the three points his time. Let’s begin the analysis.

Those who have been following both teams would really say that both have some interesting common and similar principles both in and out of possession. Whether the chance creation dependence on their full-backs / wing-backs or tightly structuring themselves to be compact in the central, Liverpool and Inter Milan’s structures are among the best in Europe. Yet, they both have their own ways of approaching the game with Liverpool embedding Klopp’s gegen-pressing into their setup and going the German way while Inter taking their roots the Italian way of still having the old-school disciplined defence.

This means that in both legs, Inter Milan are going to concede possession and try to hit on the counter while Liverpool would be looking to stamp their authority not just by having possession but also making good use of that. Inzaghi hasn’t made a lot of changes to the team that he inherited from his predecessor but an important one is the major use of zonal pressing instead of man-marking. This has given Inter Milan an additional dimension to their defence where it has not been easy for the opposition to manipulate the positions of the defenders and open up spaces. 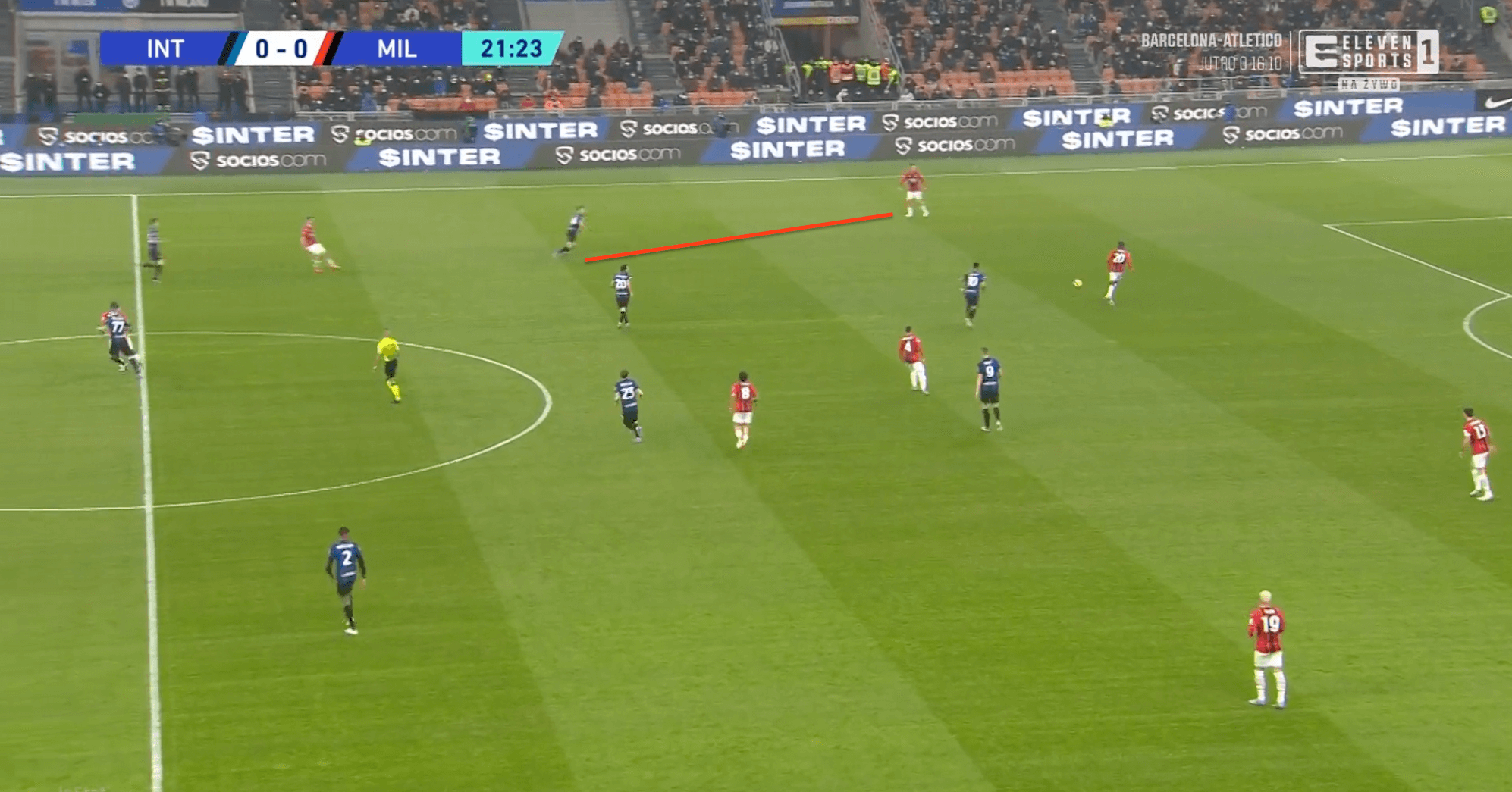 The image above shows how Inter Milan usually set up in the big games against the team’s looking to dominate possession at least in the early stages where the scores are level. The wing-back would stay deeper and in line with the central midfielders when the ball is with the centre-backs of the opposition. Once the CB plays it to the wide player, the pressing trigger would start with the wing-back jumping on the full-back holding the ball and the other players would orient themselves accordingly.

But this would also offer them a potential downside when they would look to bait the full-back. Both the Liverpool full-backs are extremely good on the ball, especially Trent Alexander-Arnold. Giving them time and space would be a very risky approach if those two could unleash potential dangerous passes to the front three. We can see in the image below where AC Milan use this to attack the spaces behind the Inter Milan wing-backs using their forwards which can be even more dangerous if those forward are Salah or Mane. 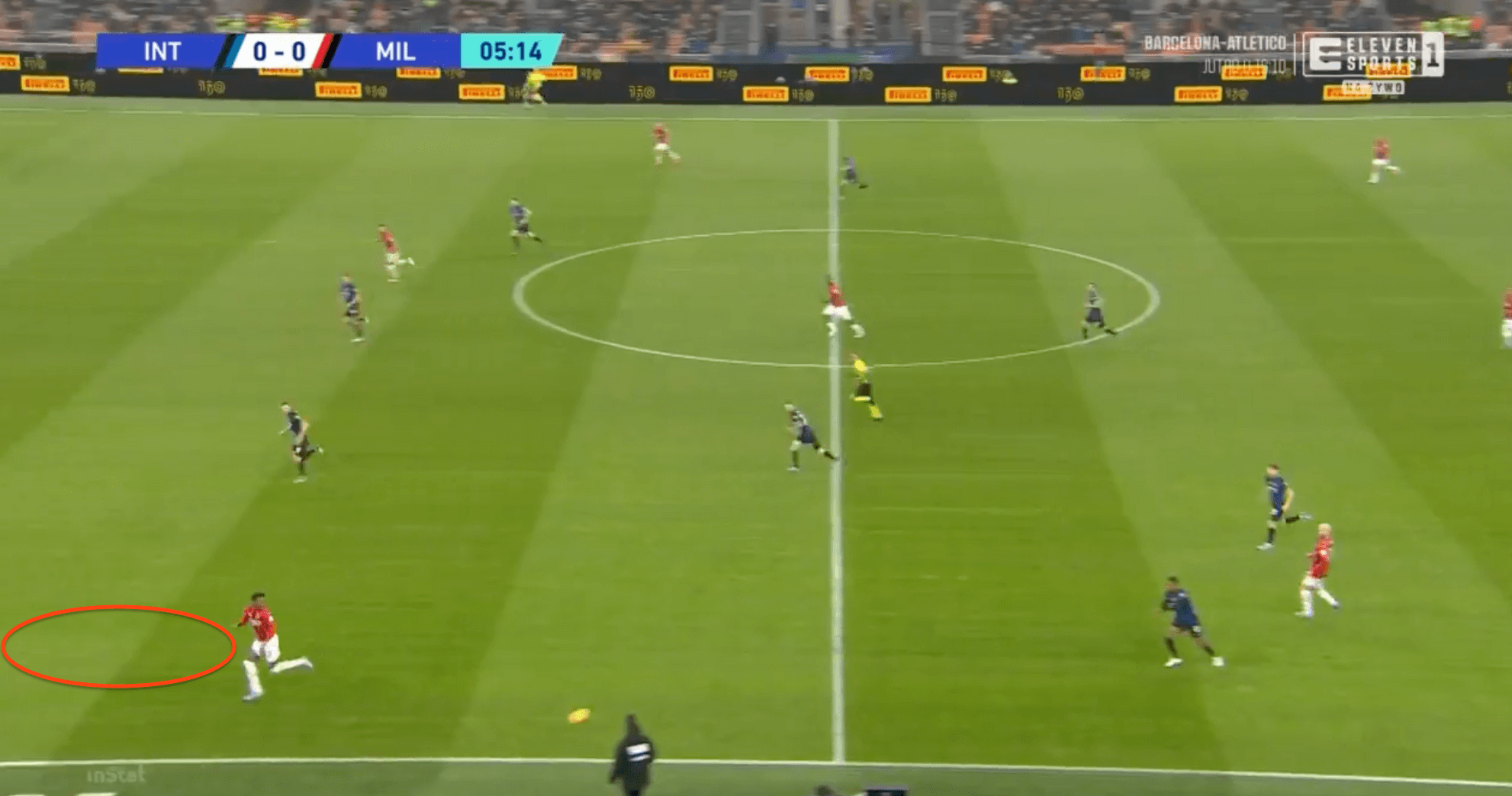 There are two possible ways in which Inzaghi would look to address this. One, the most probable option, is to settle with a flat back-five defence where the wing-backs sit deep and defend along with their CBs so that they don’t concede spaces behind. The other one is being more intense and committing their wing-backs very high and asking them to press the Liverpool full-backs even before. The latter is a high risk, high-reward approach that looks very less probable given how much it would require the midfield to cover the spaces and is more prone to errors. 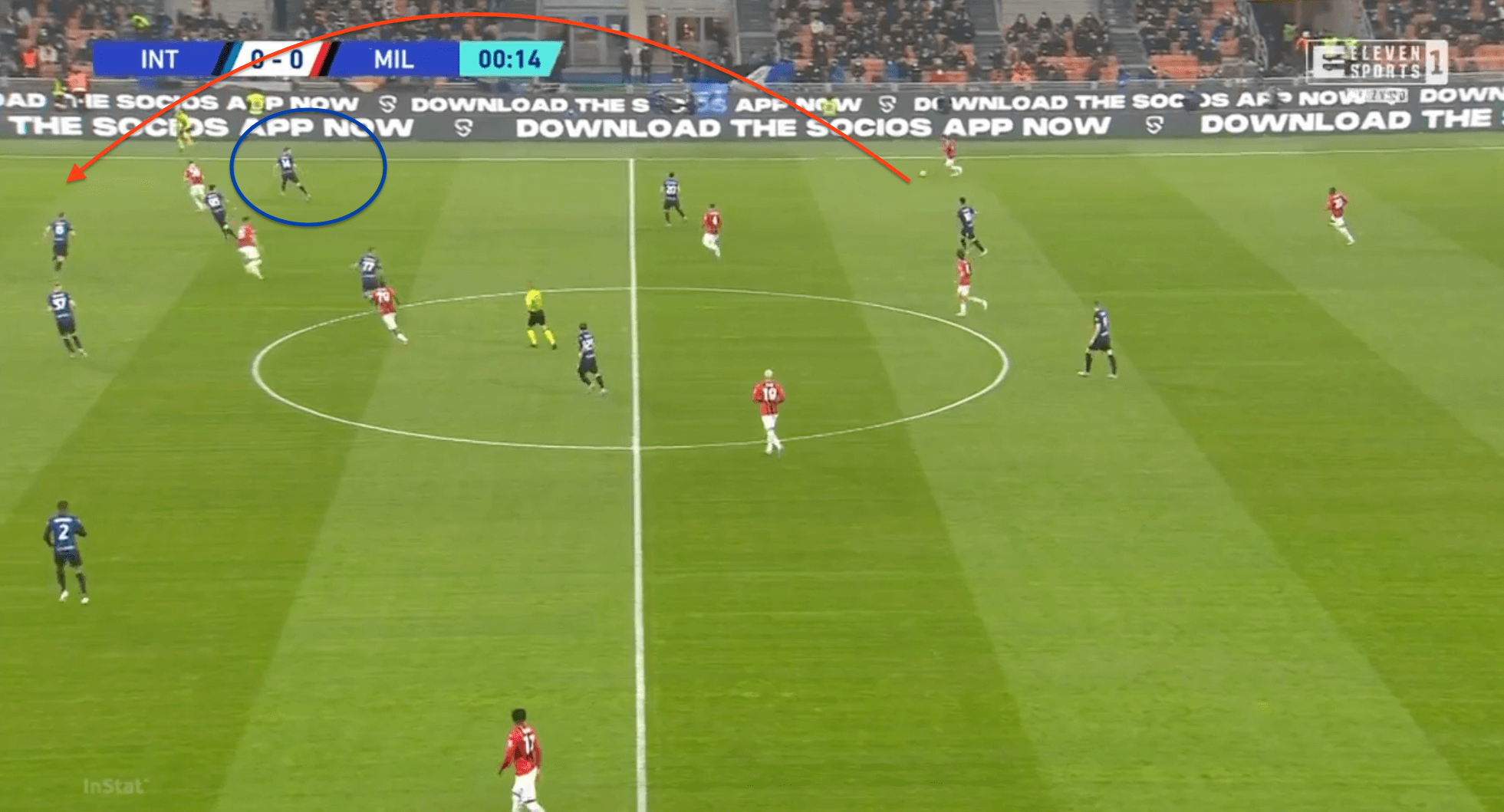 Both Dumfries and Perisic have had issues with positioning and the opponents have more or less looked to target that as well. With both liking to attack more, Inzaghi would prefer only one of them with the other being replaced by the more disciplined Darmian. We can see in the above image how Perisic is in a line of his own that leads to a Milan forward attacking that space. To note that he isn’t very forward too but the slight gap between him and the last defender of his team means that the offside trap is not set while also opening a potential space.

The back-three of Inter Milan have all been in very good form in this season too and have been doing the dirty work behind really well for their wing-backs. The likes of Bastoni and Skriniar have been the mainstays of the side and have featured in almost all the Serie A games this season. With Inter majorly using their wing-backs high and wide to create opportunities in the final third, the onus is on their centre-backs to organize the rest defence and ensure that they defend the spaces well against a dynamic Liverpool attack.

This is mostly the tactic they use in the games where they dominate possession and territory but given the nature of their next opponent, the wing-backs in this game would have more responsibility to defend and would have lesser time and space in attacking forward.

Inzaghi would be expecting his centre-backs to be at the top of their game and do well against the likes of Salah, Mane and Diogo Jota.

Liverpool are probably the second-best in their country and their first 11 are as good as any top team across Europe. But there is one area that they currently lack depth which has been the difference between them and Manchester City. Throughout the campaign, they have had issues with their midfield with their personnel lacking form and also the failure to replace Georginio Wijnaldum in the summer or in the winter transfer window might bite them back. Their captain has been out of form and also injuries to key players like Keita has led to their midfield lacking stability especially when they have possession of the ball.

There have been many instances in the season where their midfield failed to control proceedings especially when they were ahead and that has led to them conceding goals and letting teams come back into the game.

In their game against Chelsea, when Liverpool were 2-1 ahead, they never looked to secure possession and play the game a little safe with half-time approaching. And when their midfield had very few numbers which meant that they did not have good positional staggering to progress the ball, Trent decided to play a forward pass with his head that lead to Chelsea intercepting it and counter-attack to score their equalizing goal. This is something that Liverpool seem to not get right and have suffered as a result of that numerous times this season. 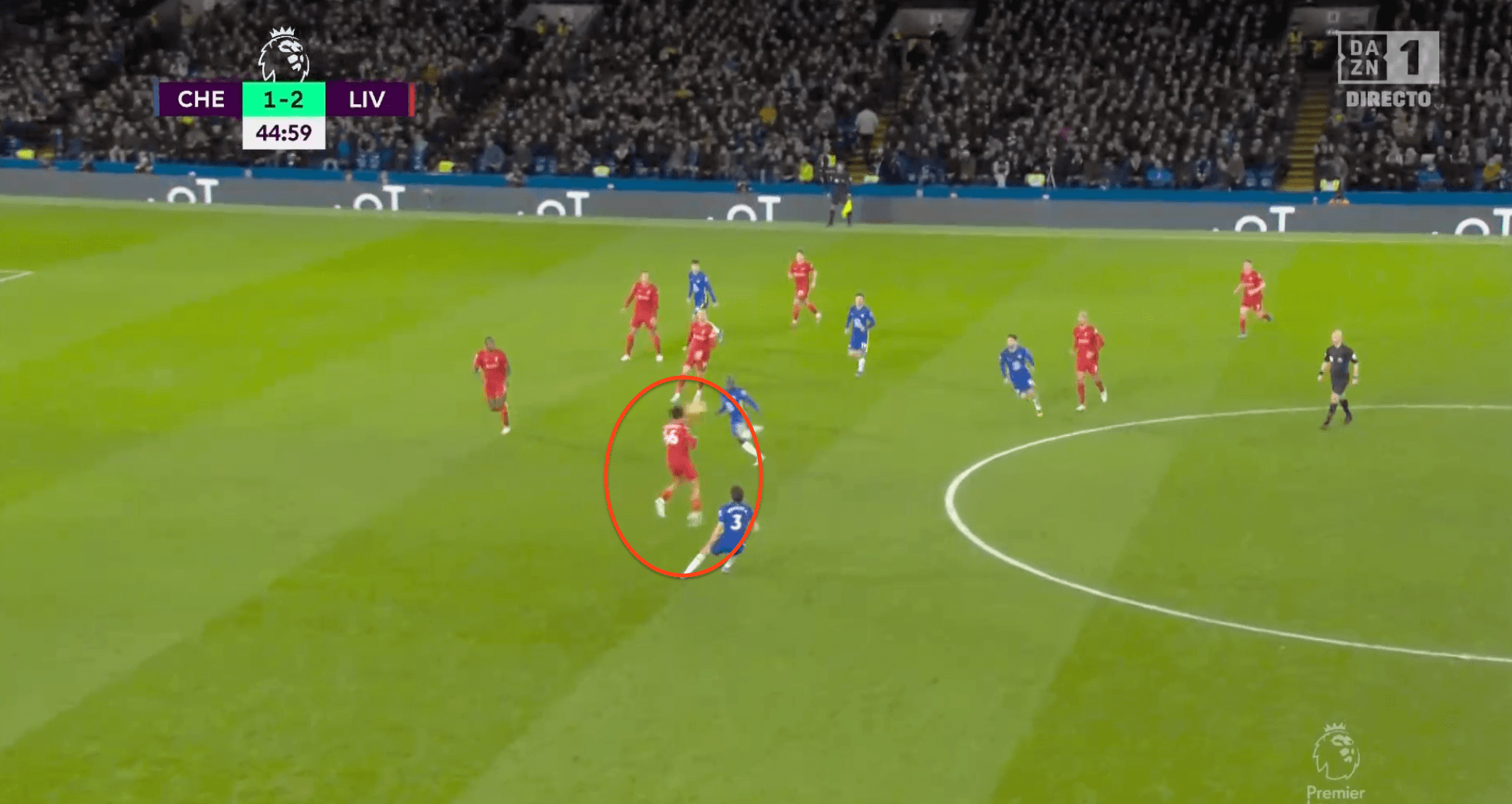 Klopp has used the likes of Curtis Jones, James Milner and Henderson as his CMs where none of them has the capability to sustain long spells of possession or be progressive with their passing. We can see how Jones is having the ball in the image below and does not look to switch to the opposite flank to TAA, who is having a huge space to move into. 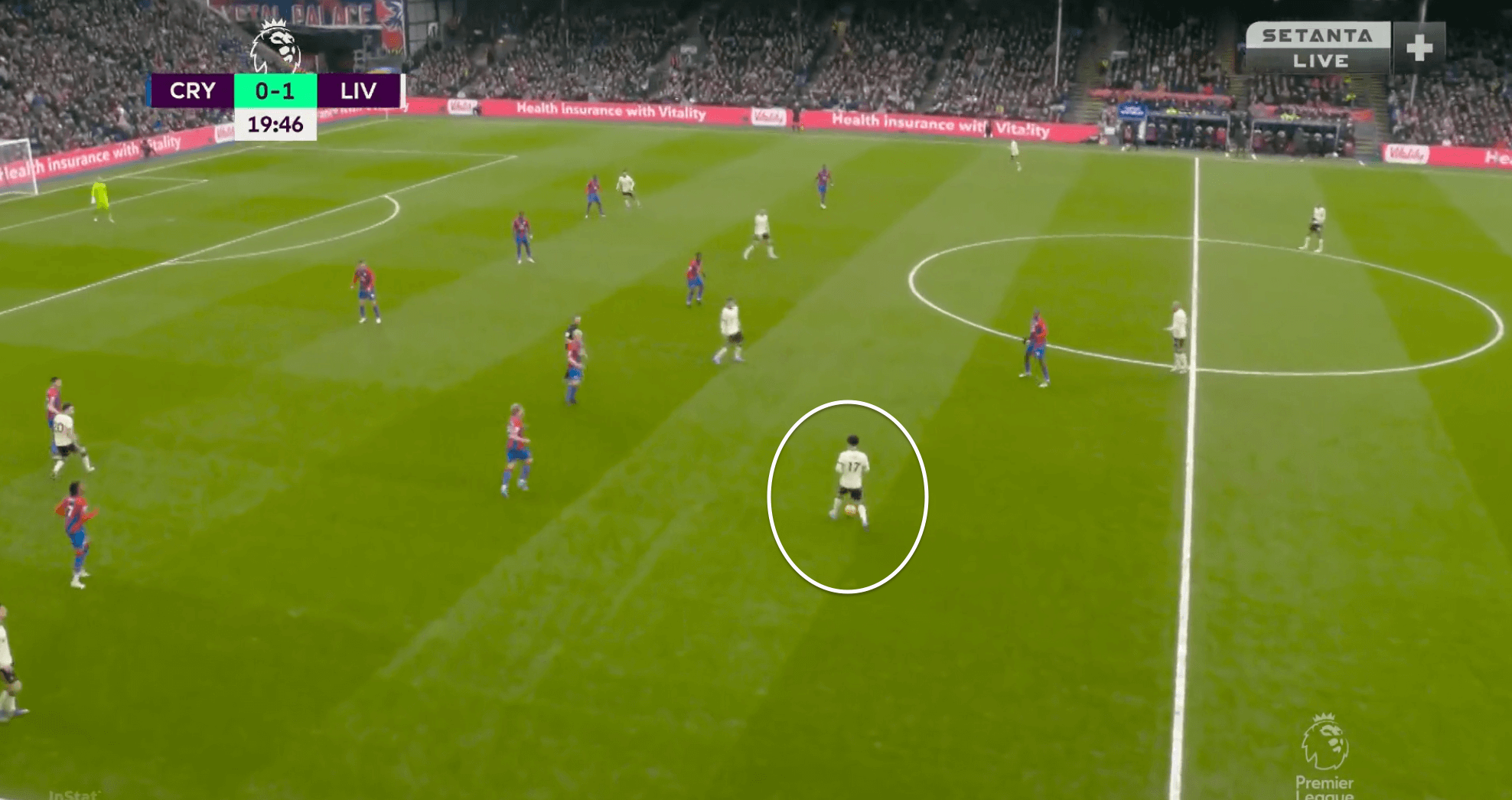 The absence of Keita and Thiago in these situations has really not helped their case here too. And it’s not just in possession where the likes of Milner are a liability. Even without possession, these issues are more amplified with them getting caught out of position leading to spaces in the transition. We can see an example of this in the image below where Liverpool look to intensely counter-press Arsenal but Milner is very slow in closing down Partey that eventually leads to him getting the ball along with time and space to play to his intended target. 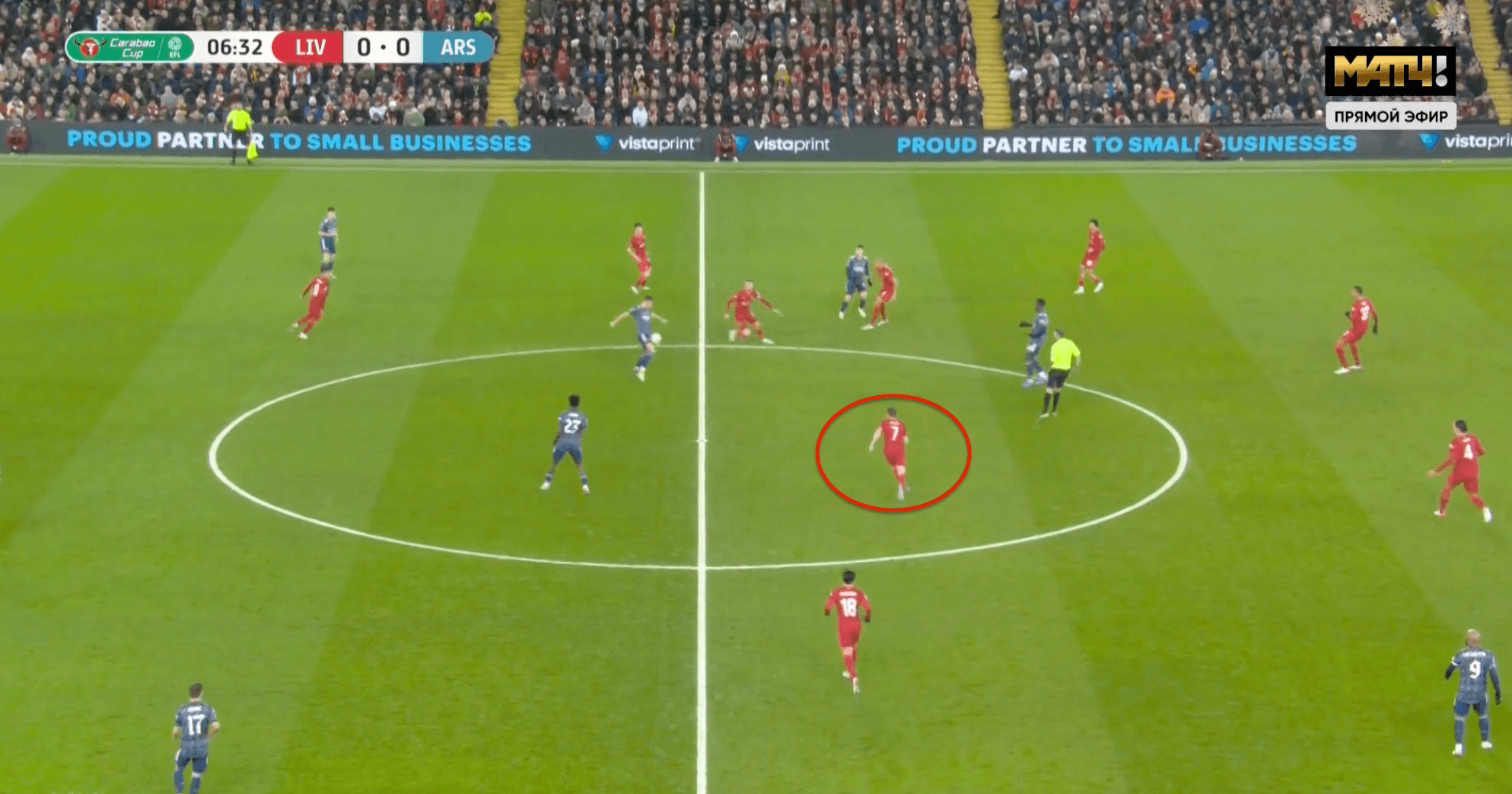 Henderson showing some decline himself, Liverpool are desperately missing the presence of a top-level eight in their side that can control proceedings in the big games. Here is an example of him losing the ball after taking a wrong touch that immediately leads to a shot for Arsenal. 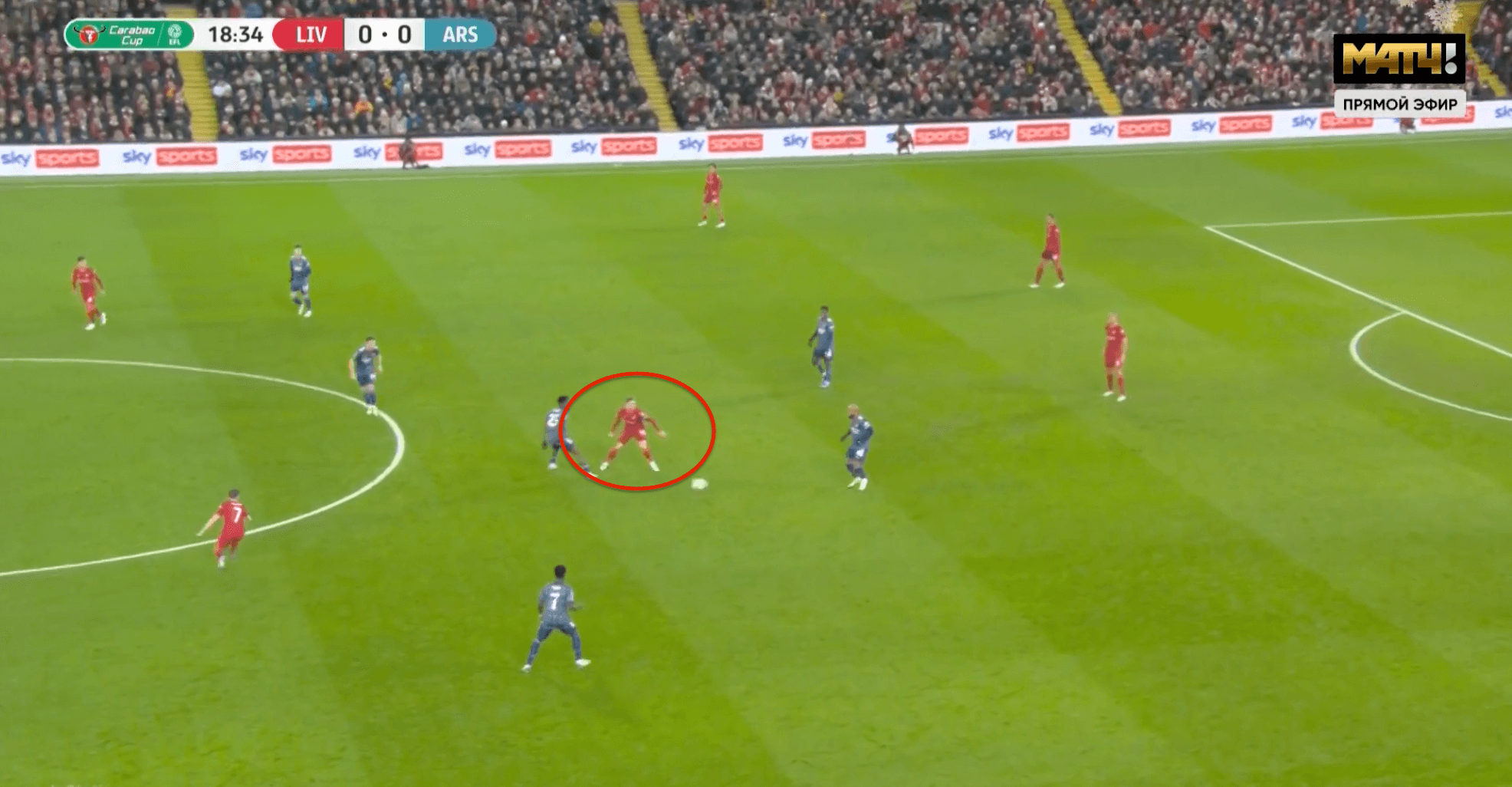 This habit from them to play the ball immediately forward in every touch that they get has also not helped their case where it comes back to them at the exact same speed in which it left. This is where the likes of Manchester City are very good where they look to sustain possession first at every moment before making their way into the final third. 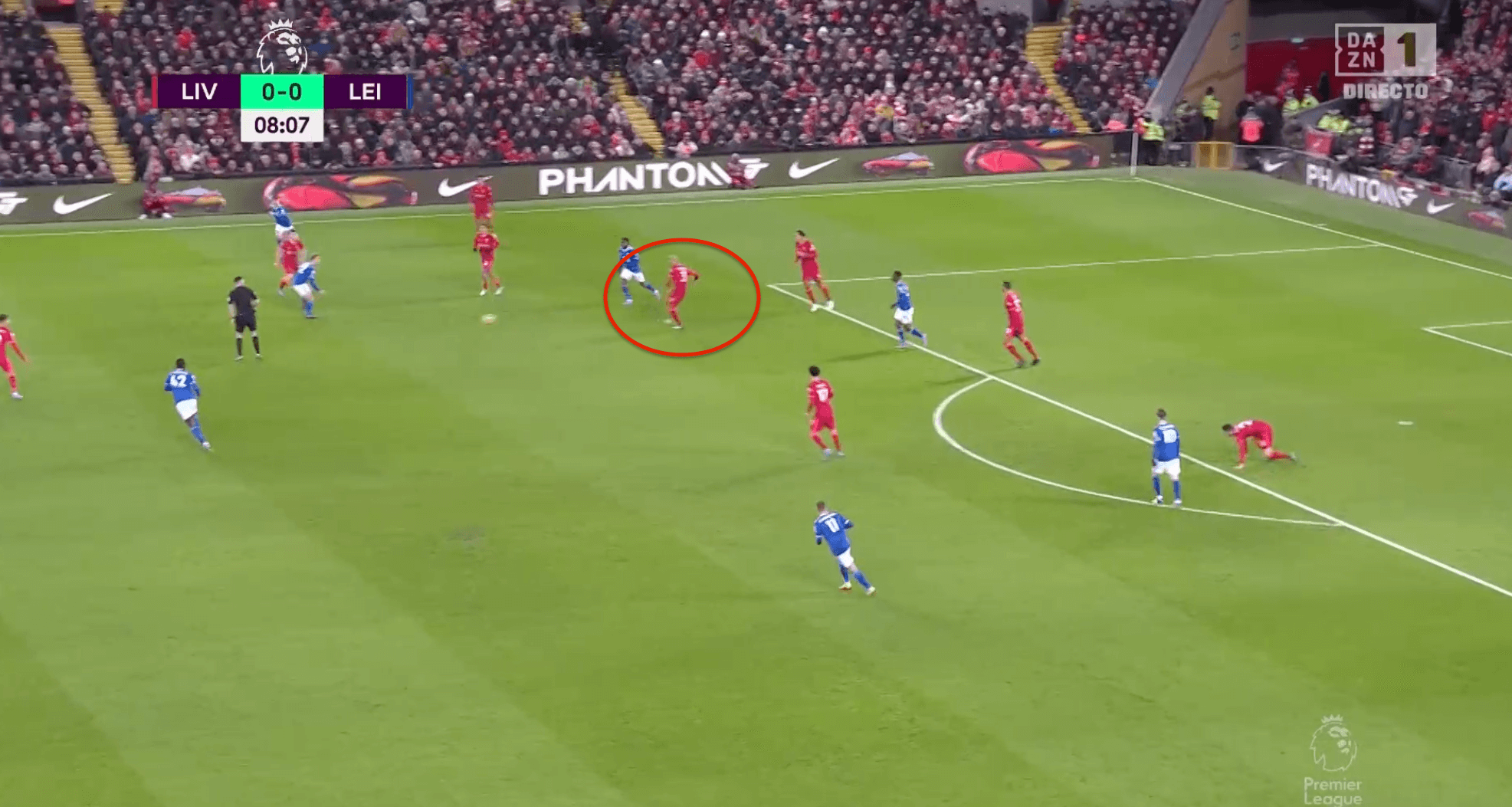 This is something that Inzaghi and Inter Milan would look to target especially with their midfield department having much more balance and stability compared to that of Liverpool’s at the moment.

The tactical battle between both the clubs would be very interesting to see from a neutral perspective and Inter Milan hosting the first leg could actually give them the advantage to take a lead before they enter Anfield. Liverpool would be hoping to win the first leg and control the tie right from the first leg and would look to carry their domestic form to the European stage.