The UEFA Nations League got back underway this week, with Portugal sealing a place in the final with a convincing win over Switzerland. All attention is now on The Netherlands and their opponents England, who are both looking to continue their rapid rises in improvement and recent good form. England, out to prove that the World Cup was not simply a fluke, will have their work cut out against a youthful, ever improving Dutch side, who have been boosted massively with the breakthrough of talents such as Frenkie De Jong and Matthijs de Ligt. In this tactical preview, I’ll look at how both teams will look to combat one another, and how England will look to stop the conductor of this Dutch side De Jong, using tactical analysis.

Many players from both sides, will have just joined up from the UEFA Champions League Final, but Ronald Koeman has stated that Virgil Van Dijk and Georginio Wijnaldum will both feature. Harry Kane did not look match fit in the final, and with Southgate remaining silent about whether or not he plays it is anyone’s guess. Kane’s abilities would be a perfect tool for England, as I will explain later in this preview.

I’d expect The Netherlands to line up in a 4-3-3 or 4-2-3-1, as they have done against other sides who play a 4-3-3 like England. When playing with this system, Holland’s full-backs are very aggressive, overlapping whenever possible and moving far up the pitch. We can see in the example below, with both full-backs in picture highlighted, how far Holland’s full-backs push on.

This allows them to create overloads on fullbacks and get crosses into the box. This is done as seen below, with the winger pinning the opposition full-back or centre-back, while the full-back makes a quick overlapping run. If the opposition full-back chooses to match the run of the full-back, then the winger will be allowed to turn at run at the defence. It is therefore vital that both Raheem Sterling and Jadon Sancho are aware of this and work hard to track back with these players.

Of course, with full-backs so high, there is always a threat of being hit on the counter-attack, so how do Holland stop this from happening often against them? The answer is their counter-press, in that as soon as the ball is lost, Holland press the ball to win it back or cut passing options for the ball carrier. Holland’s system suits this well, as counter-pressing works best with a greater number of players, so these high full-backs also contribute to the counter-press.

We can see an example of their counter-press below. With five players behind the ball, Holland are going to be left open if the ball escapes this cluster of players. Therefore, De Jong aggressively counter-presses the ball, simultaneously applying pressure to the ball carrier and cutting off passing lanes. This means the ball doesn’t escape this zone and Holland can work back into a safe defensive structure, or potentially counter-attack.

So, if England are to hit Holland on the counter-attack, it is likely that space left by Holland’s full-backs will be the key. But with Sancho and Sterling likely having to track back, how can they exploit the space left. The key lies with the striker and his offensive movements, whoever it may be.

In order to improve transitions, England may well be better to allow the central midfield players to deal with and track the runs of the full-backs, while the wingers press the deeper lying players, who will often be central midfield players. By doing this, Sancho and Sterling will be in positions higher up the pitch should a transition occur, and will be in more central areas, which gives more options in transitional situations.

We can see an example of this below, where the winger is not forced to track the full-back’s run deeply, and so he has an opportunity to transition into a large area of space.

Again below, we can see a situation which may arise in the game. Holland’s full-back is tracked by a wide central midfield player while one of England’s wingers drops centrally to cover this space, thus giving them a much better position to transition from.  Holland could combat this by pushing their midfield on further and getting them to play more between the lines and, in this situation, England would likely switch back to a conventional position for position system, with central midfield players covering central midfielders. 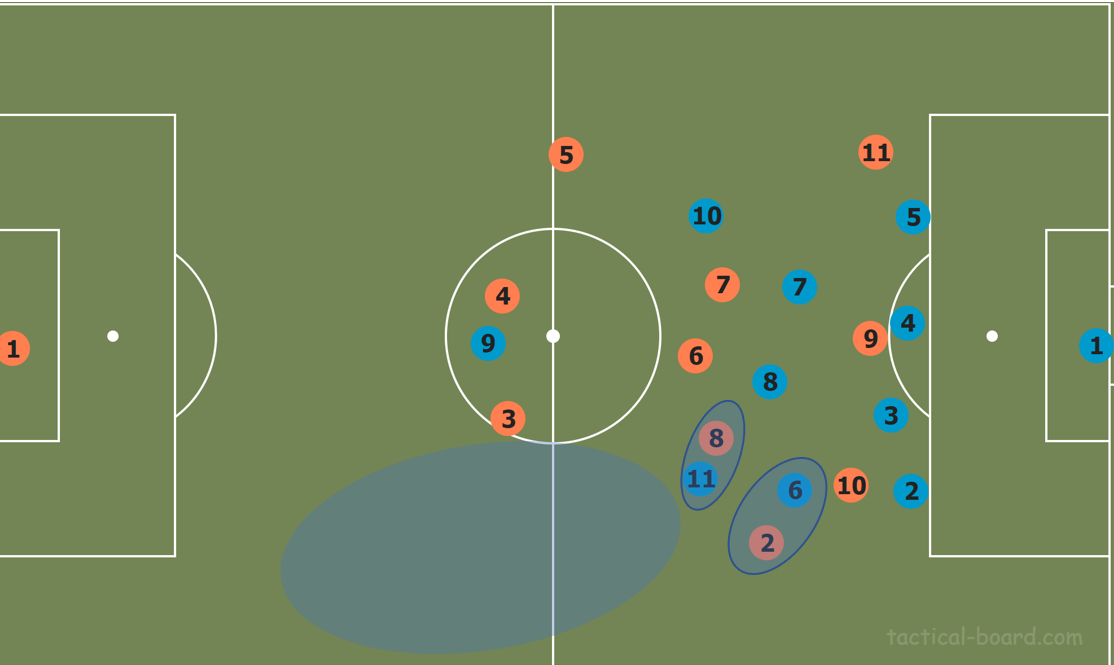 This area of transition can be maximised by the striker’s movement. If the striker stays central, the space out wide will start to be covered by one of the extremely talented Dutch centre-back pairing. However, if the striker makes a movement out wide, the centre-back will be forced to follow him, leaving a larger space in the middle. This space in the middle is more desirable quite simply because that is where the goal is, and because of Holland’s central counter-press, Holland take longer to recover in defensive transitions in the middle parts of the pitch. This is illustrated below, with the striker pulling the centre-back out to create space in the centre. The reason I said Harry Kane would be the most desirable for this game is for his outstanding hold-up play, which would allow counter-attacks to be built upon him holding the ball up from a long ball, which would bypass Holland’s counter-press. However, Marcus Rashford’s pace would almost make him a suitable candidate. 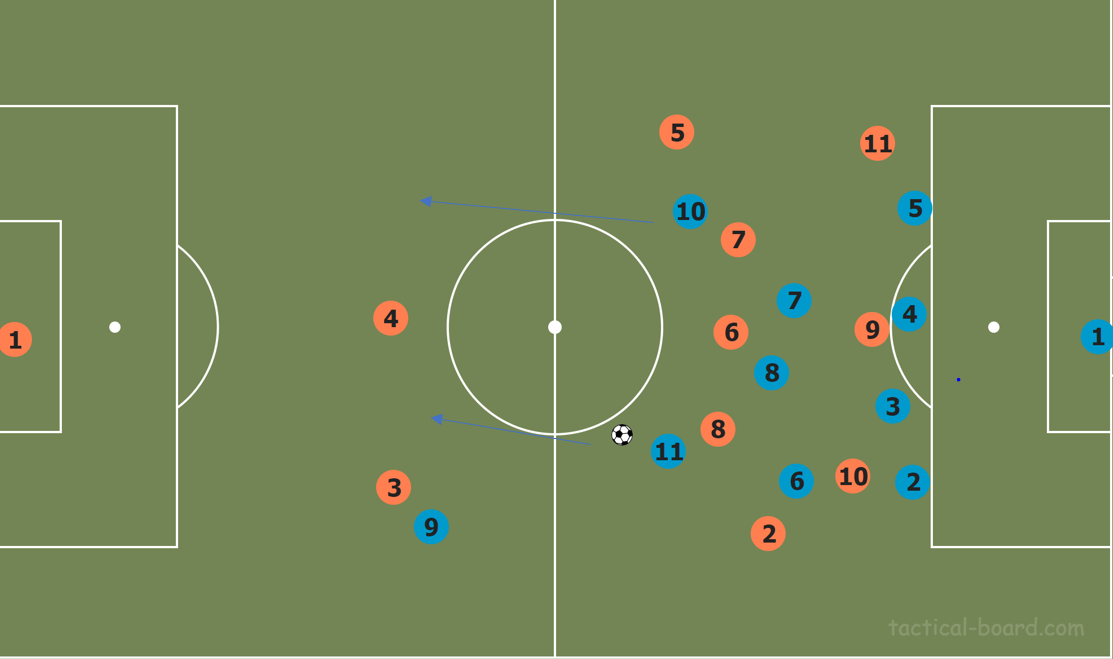 I would expect England to try to stop De Jong’s build-up play in the same way they did to Luka Modrić and Croatia. As we can see in the image below, this involved a light press on Modrić, in order to prevent players from being taken out of the game by becoming too tight. The nearest central midfield player, often Delph, would press Modrić whenever he turned on the ball, backwards passes or passes that were received facing his own goal were not pressed.

In the example below, we can see Modrić is under little pressure with his back to goal, but Delph is in a close enough position that if he is to turn he can be pressed.

Here Modrić does turn, and so is pressed by Delph.

De Jong shares many qualities with Modrić, the most important one, in this case, being his press resistance, so it is important to not commit too many men onto De Jong and get caught in a trap, as one pass from De Jong could punish the side.

Holland will likely go into the game favourites, with England potentially missing some key players. I would expect Holland to look to control the game, and therefore England will look to take advantage of their pace up front and hit Holland on the break. This doesn’t mean England will play in a defensive system all game, as they will have to disrupt Holland’s passing patterns, but with the added quality in possession the Dutch side has, I would be surprised if they didn’t have more of the possession in the game.