UEFA Nations League 18/19: How did the Dutch comfortably beat the world champions?

One of the things that I am asked most often when people find out that I write about the game and work as a scout and analyst within it is whether I can truly just enjoy a game, or if I am constantly looking for an angle or an interesting concept within it. This has made me question my own ‘fandom’ of the game on more than one occasion. The simple fact is that you have to love the game to spend so much time thinking about it.

For me, the beauty of the game now lies in those moments that transcend the ordinary. The first time I watched that Barcelona team led by Pep Guardiola is one such example. Seeing the ruthless counter-pressing efficiency of Jurgen Klopp’s Borussia Dortmund at the peak of their powers is another.

This week I had this experience again when watching the Dutch comprehensively pick apart the French national team. Their victims are largely untouched since winning the World Cup just a few months ago. It was not that the 2-0 scoreline was overly impressive. It was rather the manner that the Dutch side played in picking apart a strong French side.

I read something in the aftermath of the match which sums the experience up completely. I apologise, but the source escapes me. When rating the French players in the match, the author gave N’Golo Kante a low to middling score. His explanation was that Kante ‘could not run as fast as the Dutch passed the ball’. That in itself encapsulates the Dutch performance in this match and deserves greater examination.

Instead of a relatively straightforward match analysis, we will, therefore, examine the mechanisms that the Dutch side used in order to progress the ball forwards in the various phases of attacking play. 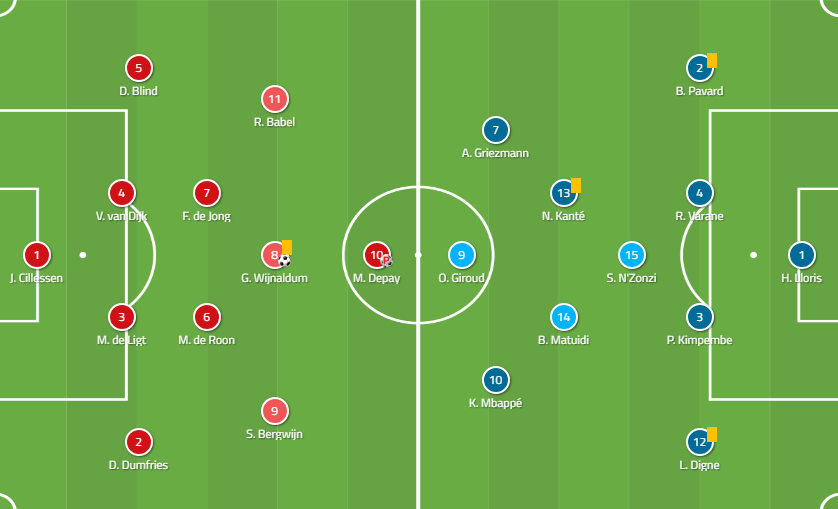 We need to start, as ever, with the team news from this match. What is most interesting is that the Dutch coach has achieved success to this point with largely the same group of players that his predecessors failed with spectacularly.

There have been obvious developments in a core of key players. Ajax duo Matthijs De Ligt and Frenkie De Jong, in particular, have made strides towards becoming established international-class players. PSV’s Denzel Dumfries and Steven Bergwijn are also following a similar trajectory.

Look beyond that and there are interesting narratives emerging, such as the reintroduction of former Liverpool wide player Ryan Babel. The use of former Manchester United attacker Memphis Depay in a central role is another interesting concept. These have given the Dutch a flexibility in attack that they were perhaps missing before.

The initial build up

In Marc-Andre Ter Stegen Barcelona have a goalkeeper who is in the top two or three goalkeepers in world football. His back up, however, is the former Ajax goalkeeper Jasper Cillessen. The Spanish side didn’t sign Cillessen because he was cheap but because he perfectly fits the goalkeeper model that they look for. He is a strong shot-stopper with the ability to participate in the initial build-up with the ball at his feet.

The latter was evident throughout this match as the Dutch played with a sense of bravery in the face of an isolated but persistent press from the French. Key to the initial stage of build-up from the Dutch was Cillesen’s ability to receive the ball under pressure before finding a safe outlet. This helped the Dutch attempt to dominate the French pressing action both numerically and positionally. 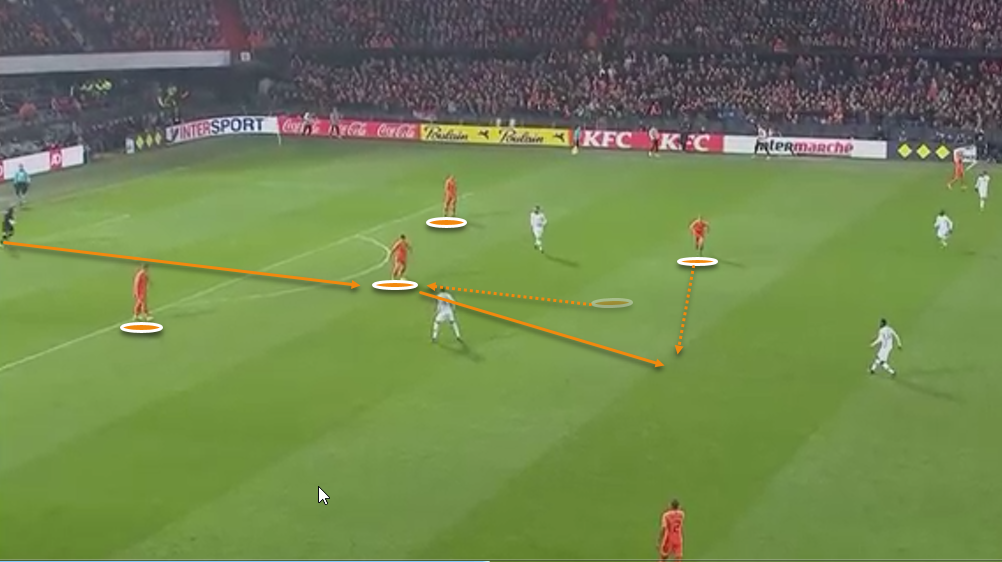 The Netherlands played with a double pivot in the centre of midfield of Marten De Roon and Frenkie De Jong. They were both extremely prevalent in the build-up and in progressing the ball up the pitch in the attacking phase. What was interesting in this match from the Dutch was that their central defenders did not immediately split wide of the penalty area in order to allow a central midfielder to drop in between them. Instead, they remained in the width of the penalty area. This meant that any passes out from the back had to be accurate and quick.

In this example, the Atalanta midfielder De Roon splits the central defenders and receives the pass from Cillessen. As he does so, his central midfield partner De Jong reads the space and cuts across centrally. De Roon is able to find him in space and De Jong drives forward in possession, away from the press.

We see a similar scenario here, although De Ligt has split slightly wider to offer a ‘safe’ passing option. As Cillessen comes under pressure from the two French forwards pressing, though, he instead hits a direct vertical pass to the second line finding the more advanced midfielder.

There are two key things to note from this sequence. Firstly, look at the distance between the French midfield and their attack as they press out of possession. There is no secondary press to speak of at all. The Dutch were able to use this space time and time again to escape pressure and progress the ball forward.

Secondly, notice the idea of the ‘safe’ pass out to De Ligt. That pass would have allowed the Dutch to play out down the near side. However, they showed a clear preference  throughout the match to connect in the central areas in the first instance. This in effect opened up the whole pitch, and prevented the opposition from creating a secondary pressing trap that would force the play down the near side into an area that the French could exploit.

Instead, we saw the Dutch play the first pass into central areas either on the first or second line. This allowed them to bypass the initial press and set up the next phase of the attack.

The next phase of ball progression saw the Dutch implement a very simple mechanism that allowed them to dominate the ball in areas of the field that the French simply could not close down. When playing a positional style of play and looking to dominate the space as well as the ball in possession it is essential that you find a route to penetrate the opposition defensive block in order to play the ball vertically through into the final third.

More often than not, these passing lanes into the final third are found by central defenders who can control possession from deeper areas. This is a key reason that we have seen an emergence of ball-playing central defenders in modern football.

In this match the Dutch started with a central defensive partnership of Matthijs De Ligt and Virgil Van Dijk. Both are superb when passing forward from deeper areas. As an additional wrinkle, however, we saw Frenkie De Jong drop back to the left of the central defenders. This provided a third option for ball circulation.

Here we see the Dutch in comfortable possession against a deep block from the French. The ball is initially with De Ligt on the near side, but this is where the French block is concentrated. Instead of looking to force the ball through there, the Dutch switch back to Van Dijk in the central area. This switch starts to shift the French block across but there is still no obvious passing lane.

Now we have De Jong dropping in to support Van Dijk and receiving the ball deep in the half space. He then has the capacity to turn and drive forward with the ball, or look for the vertical pass as the French look to readjust their defensive positions across to the far side quickly.

Here the Dutch structure in possession is more narrow with De Ligt taking a higher line than Van Dijk. The French defensive block is also more active. The front two are at least threatening a press and the midfield four look like they could support that. There is a pay off, however, as the space between the French defence and midfield can be exploited.

We see De Jong drop to the same line as De Ligt in order to offer the option to pass around the front two of the French. When taking possession of the ball in this area, De Jong then has the option to play out wide to the fullback or look for the vertical pass through the midfield line to the player that I have highlighted in a large pocket of space.

The final step for progressing the ball forward comes when you look to play into the final third of the field and of course into the penalty area. Here we saw the Dutch use a couple of key mechanisms in order to find players in space in these key areas that could hurt the French defensive block.

The main mechanism used by the Dutch in the final third saw the wide forwards, Steven Bergwijn and Ryan Babel, move inside into central areas. The fullbacks Denzel Dumfries and Daley Blind moved into high areas in order to provide width.

These movements coupled with the passing abilities that the Dutch possess in deeper areas made it difficult for the French to cover all of the passing options into the final third. In the image above the initial pass is a relatively simple one between De Jong and De Roon, but the pass opens up an angle for the ball to be played behind the French midfield line into a space that Steven Bergwijn can exploit in front of the French defence.

This time the available space is in the wide areas with Denzel Dumfries moving high into a receiving position. The first pass is played into Bergwijn who has drifted into the half space before he can receive the ball. As he does so, the French left-back has moved inside with him and space is open on the right. A simple pass outside allows Dumfries to move onto the ball and attack the space behind the French defence.

It is, of course, difficult to draw any immediate conclusions on the back of a single performance. Given the Dutch national team’s abject failure in recent years, however, we are certainly seeing a resurgence of sorts.

More than anything else though we are seeing them return to playing football in the instantly recognisable ‘Dutch school’. For anybody with an interest in the beautiful game, this can only be a positive thing going forward.