The first leg of this Europa League semi-final will come as a welcome distraction to Arsenal and Valencia who are both struggling in the race for a Champions League spot in their respective domestic leagues.

This tactical preview will look at some of the potentially key tactical battles and areas where both managers will be looking to get the better of their opponent.

Arsenal have been dealt with the news that neither Denis Suárez nor Aaron Ramsey will be available for the rest of the season. They join Héctor Bellerín, Rob Holding and Danny Welbeck on the long-term injury list.

Left-back Nacho Monreal will face a late fitness test and Mesut Özil should return after missing Sunday’s defeat at Leicester with a bruised foot.

Unai Emery has favoured a 3-4-1-2 formation recently, and Valencia manager Marcelino has admitted that this is how he expects his compatriot to set out his side. Assuming Monreal is not risked, Arsenal’s line-up could look something like this, with Mesut Özil moving into the wide channels to support the attacking wing-backs: 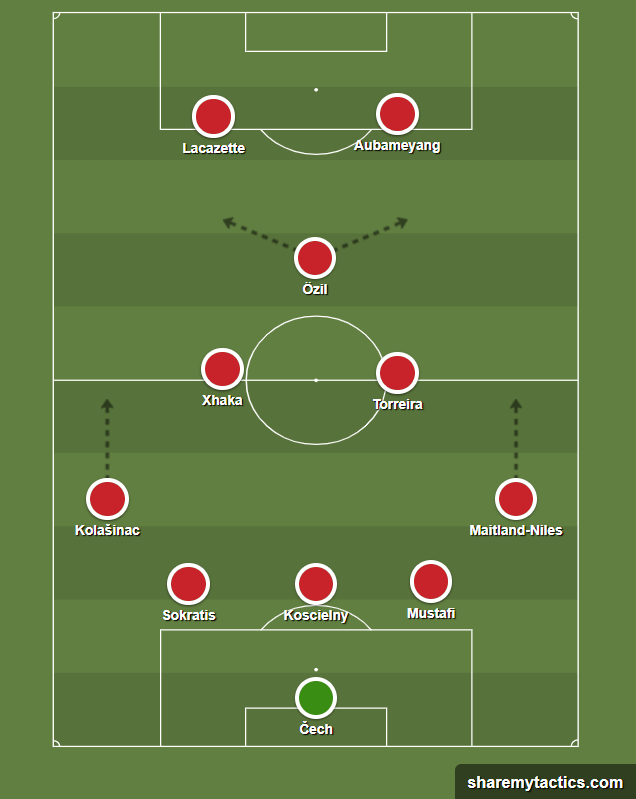 As an alternative, Emery could opt for a 4-2-3-1 system. In fact, Emery may even change formation mid-game if things are not working out, like when he switched to the 4-2-3-1 at half-time in the defeat to Crystal Palace. If the Spaniard does opt for this system at any point, a defender would be sacrificed and Alex Iwobi would most likely feature on the left wing with Pierre-Emerick Aubameyang or Henrikh Mkhitaryan appearing on the right flank.

The main worry for Valencia manager Marcelino going into this game will be the absences of midfielders Geoffrey Kondogbia and Francis Coquelin. Former Arsenal player Coquelin had taken over midfield defensive duties recently in Kondogbia’s absence, but now with the Frenchman also unavailable Marcelino will have to consider other options.

Marcelino has hinted that he could turn to utility man Daniel Wass to fill the central midfield role next to playmaker Dani Parejo. Wass has been playing at right-back recently but if natural right-back Cristiano Piccini is declared fit then that could allow Wass to be considered for a midfield role.

Unlike Emery, Marcelino is not known for changing his system much so we can expect Valencia to line up in a narrow 4-4-2 formation with the wide players cutting inside:

The battle for the wide areas

One of Arsenal’s main challenges when coming up against a 4-4-2 is how to get their wing-backs to advance into dangerous positions when they are outnumbered down the flanks.

One potential solution that Arsenal have found for this problem is to have the ‘number 10’ player move over to the flank where the ball is to offer an out-ball to the wing-back who is being pressured.

The image below is from Arsenal’s game against Napoli, who, like Valencia, also play a 4-4-2. We can see that the wing-back Maitland-Niles is being pressured by his opponent but he manages to overcome this by playing a back-heeled pass down the byline, and sure enough Aaron Ramsey (playing in the number 10 role) is on the scene to collect it. 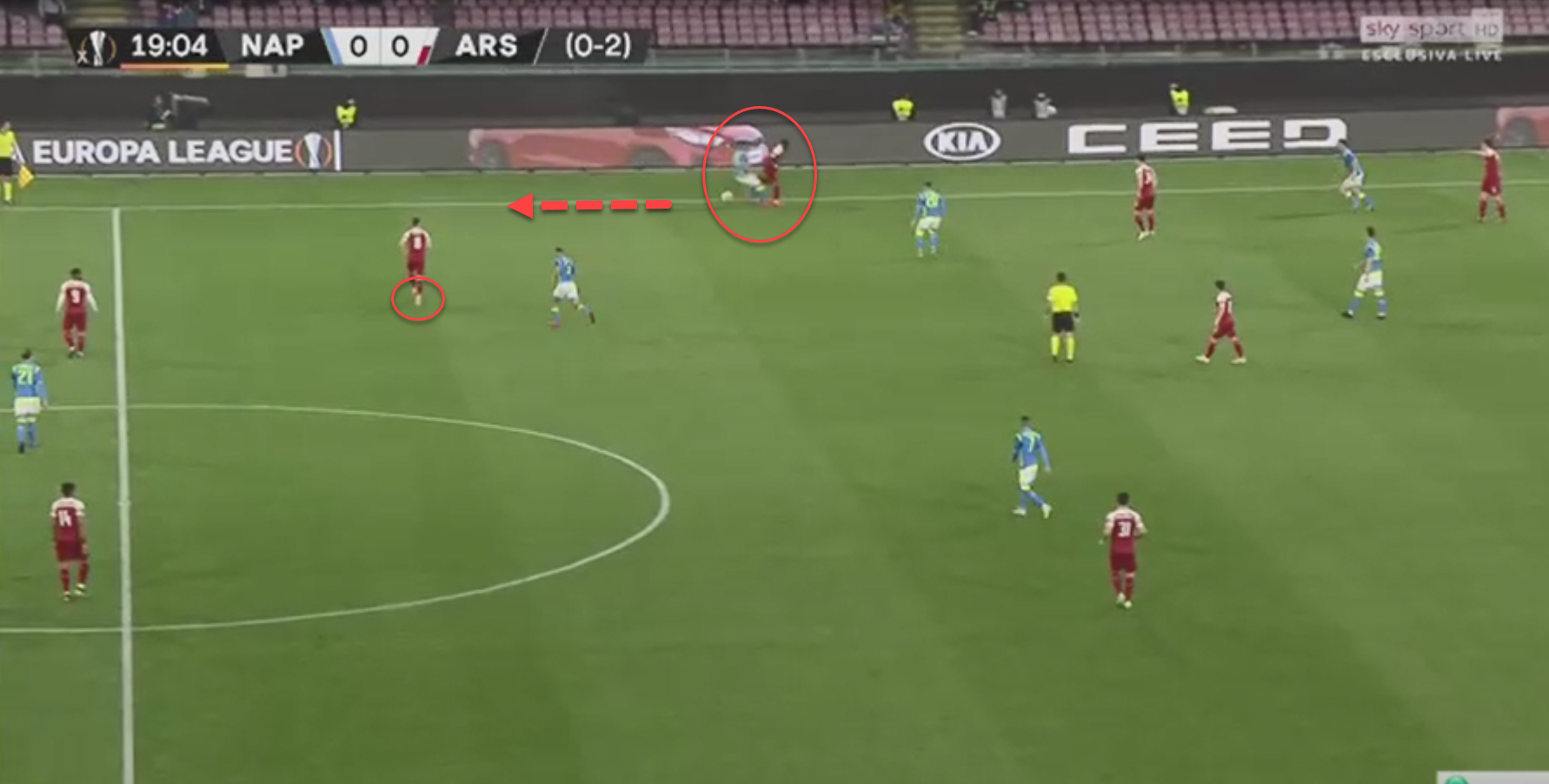 Doubling up in the wide areas could be a particularly effective tactic for Arsenal due to Valencia’s problems with preventing and dealing with crosses. Valencia’s wide midfielders don’t always provide effective cover for their full-backs, which can invite the opposition to make runs down the flanks. In the image below, notice how Valencia’s wide midfielder Guedes is caught ball-watching, allowing the runner in behind. 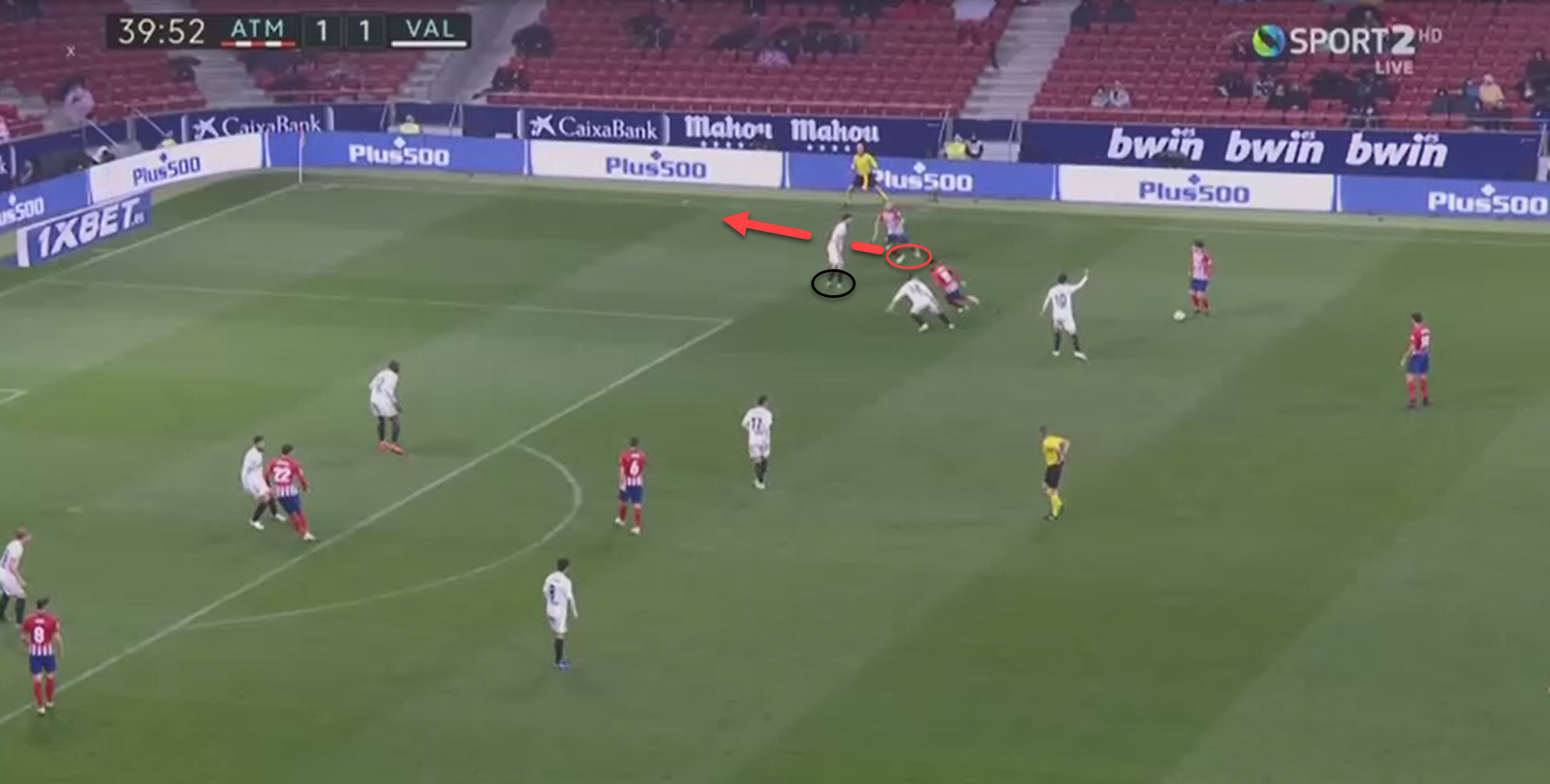 In this kind of situation, Özil might be able to occupy the full-back and allow one of Arsenal’s wing-backs a free run down the flank.

It is not just going forward that Arsenal will be concerned about Valencia’s numerical superiority in wide areas, but in defensive phases as well.

Like Napoli, Valencia look to get their full-backs forward to support the wingers. This is especially true of left-back José Gayà. In the image below from Valencia’s game against Atlético Madrid, we see how he plays a clever one-two with the left-sided midfielder in order to receive the ball in a dangerous position close to the by-line.

In the image below from that game, we see how Lucas Torreira is pulled away from his central midfield position to deal with the threat of Napoli’s left-back Ghoulam. This, in turn, meant that Granit Xhaka had to shift across to cover the midfielder Torreira had left behind and Napoli’s Milik (circled in blue) was left unmarked on the edge of the area. 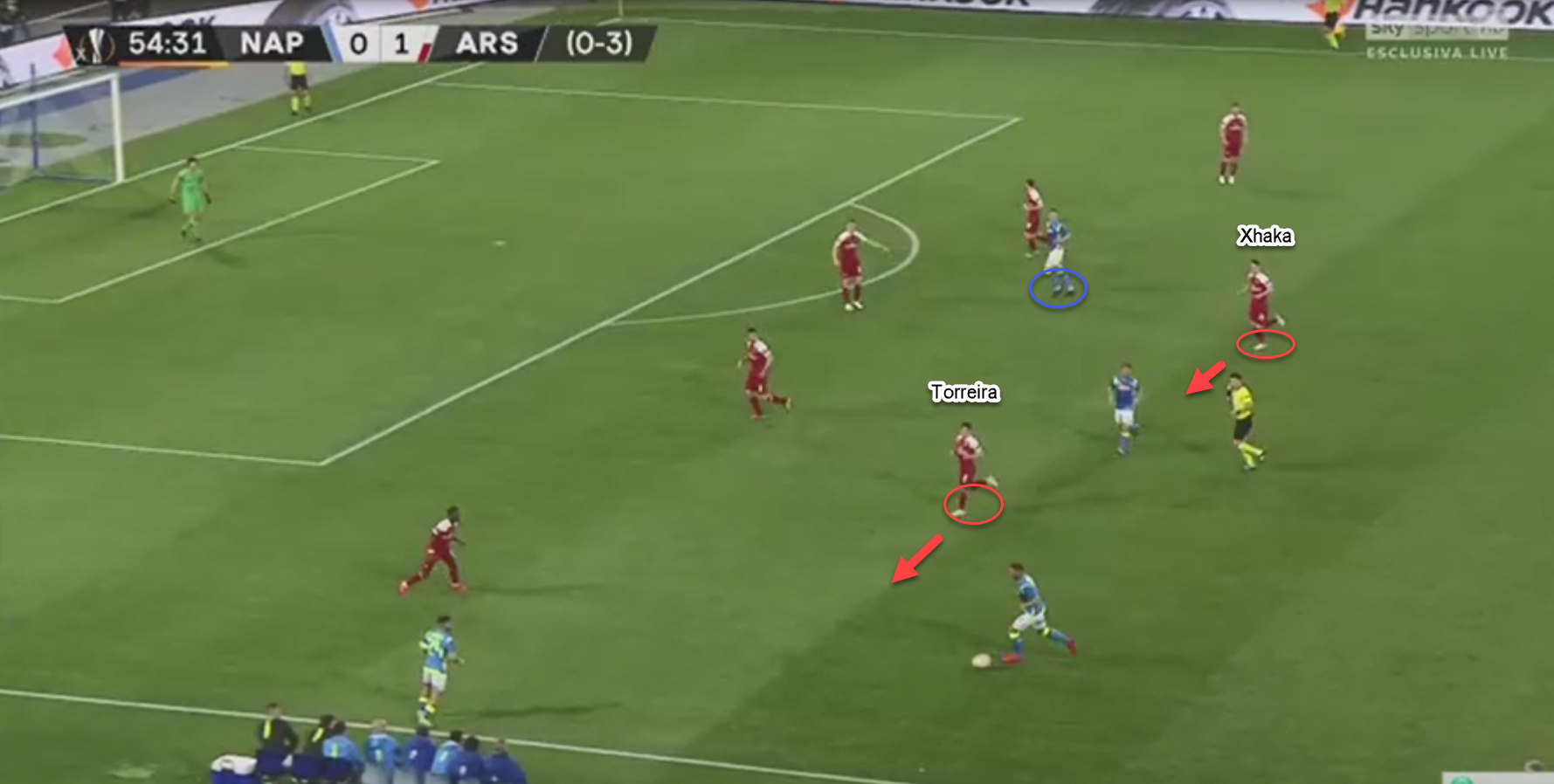 If this develops into an issue for Arsenal then one option might be to have the number 10 player drop back and pick up the opposition full-back, or another might be to switch formation altogether and revert to the 4-2-3-1 formation. This would give Arsenal two wide players on each side to match the opposition.

In any case, what Arsenal must avoid is situations like the one above where opposition players are left free between the lines. This is because Valencia are particularly dangerous in this kind of scenario.

The space between the lines

The half space in between the defence and midfield is one that Valencia typically look to exploit in their attacking phases.

This is because although Valencia like to play a fairly direct brand of football (they only average 47.7% possession per game), their attacking players lack height: strikers Kevin Gameiro, Santi Mina and Rodrigo all measure under 6ft as do wide players Carlos Soler and Gonçalo Guedes.

Since these players generally lack the height and strength to win aerial duels and provide knock-downs, they need to receive the ball into feet and the only way they can do this is to search for spaces in between the lines.

Take the image below as an example. Right-sided midfielder Soler has moved into the half space to receive the direct pass from the right-back that breaks Atlético’s midfield line. Striker Gameiro is also positioned in between the defensive and midfield lines, in an ideal position to receive the ball. 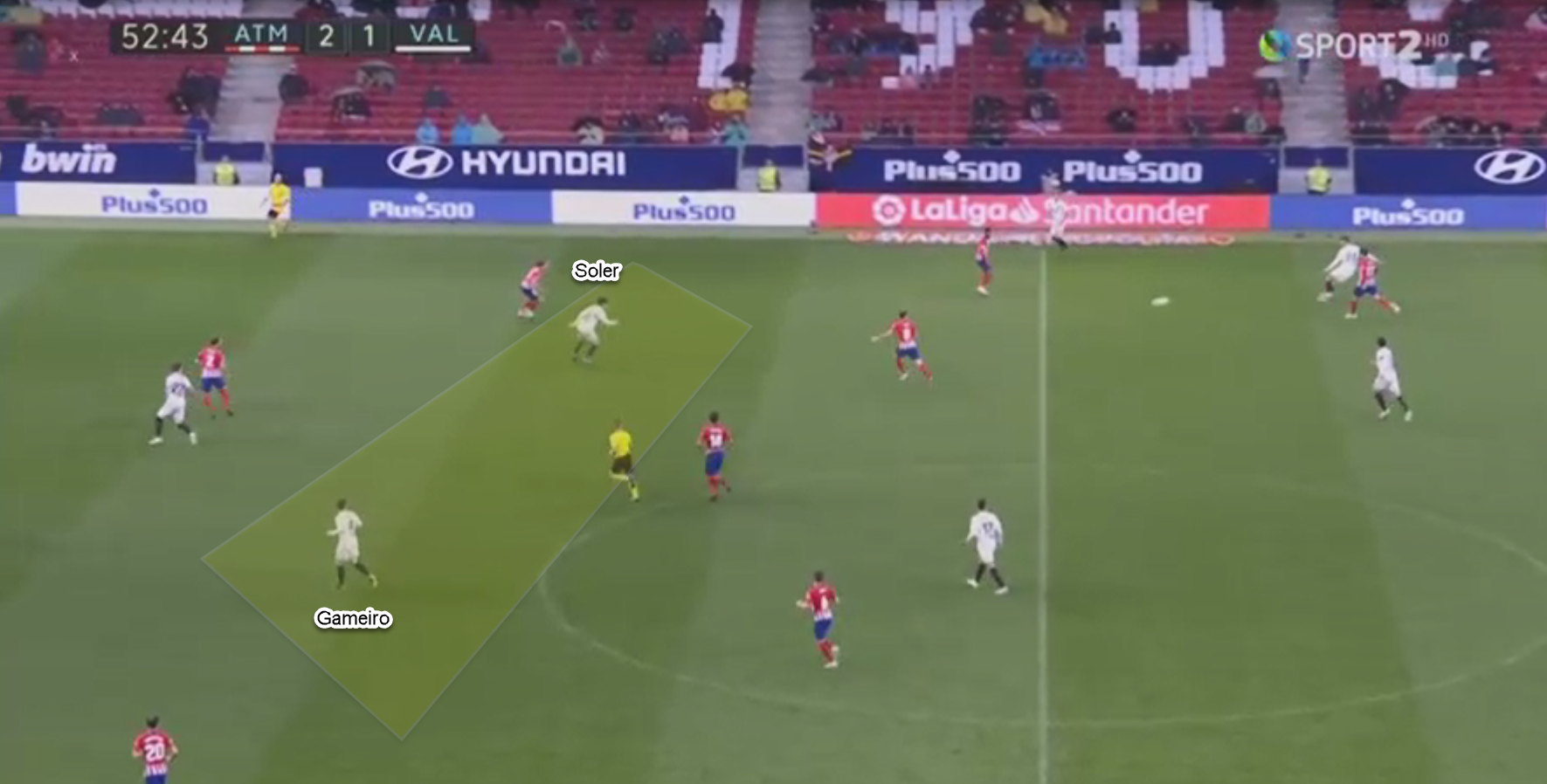 A key player in providing these direct balls into feet is Valencia’s central midfield playmaker and captain, Dani Parejo. The 30-year-old ex-Real Madrid player is skilled at breaking free of his marker and playing precision passes to the likes of Santi Mina, as he does in the image below.

Notice how in his move the Atlético defender, aware of the danger, has quickly stepped out to close Mina down. This is likely to present a big challenge for the Arsenal defence in terms of decision-making, though if they do play with three centre-backs, the extra cover provided by the spare man could prove invaluable.

Valencia are at their most dangerous when they attack in quick transitions. After winning the ball back they aim to get the ball up the field as quickly as possible.

One of the ways they set themselves up to do this when they don’t have to ball is to have the winger on the far side stay forward rather than join the other midfielders in tracking back. In the image below, it is left-winger Guedes who can be seen lurking much higher up the pitch than his teammates who are getting back to defend. 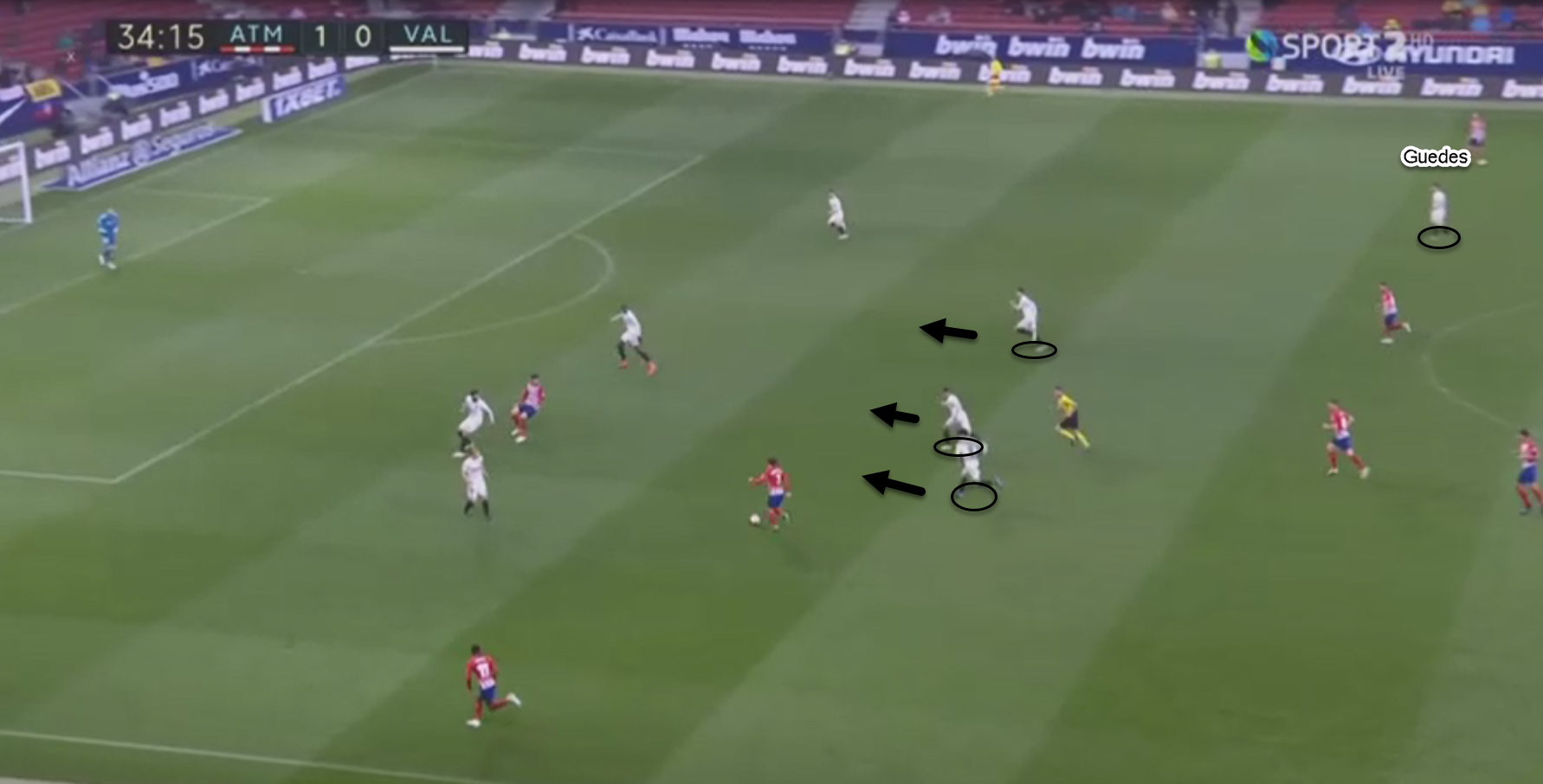 At first sight, this could be mistaken for laziness on Guedes’ part but what the Portuguese is actually doing is providing an outlet should his teammates win the ball back. In this particular instance, that’s just what they did seconds later.

In the next two images, we see how Guedes’ head-start on his teammates allows him to exploit his explosive pace as Valencia break, with Guedes himself eventually receiving the ball in a very threatening position. 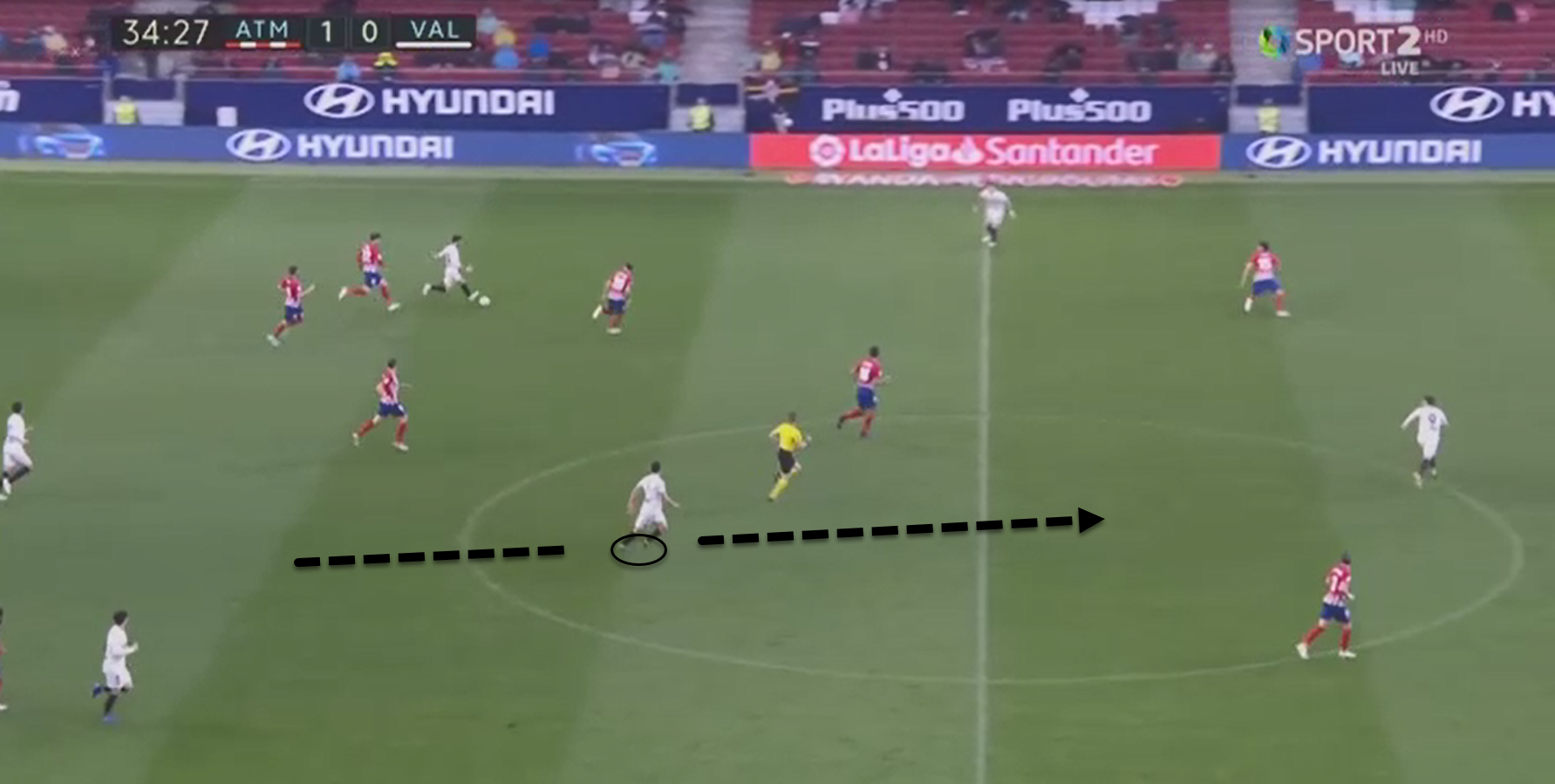 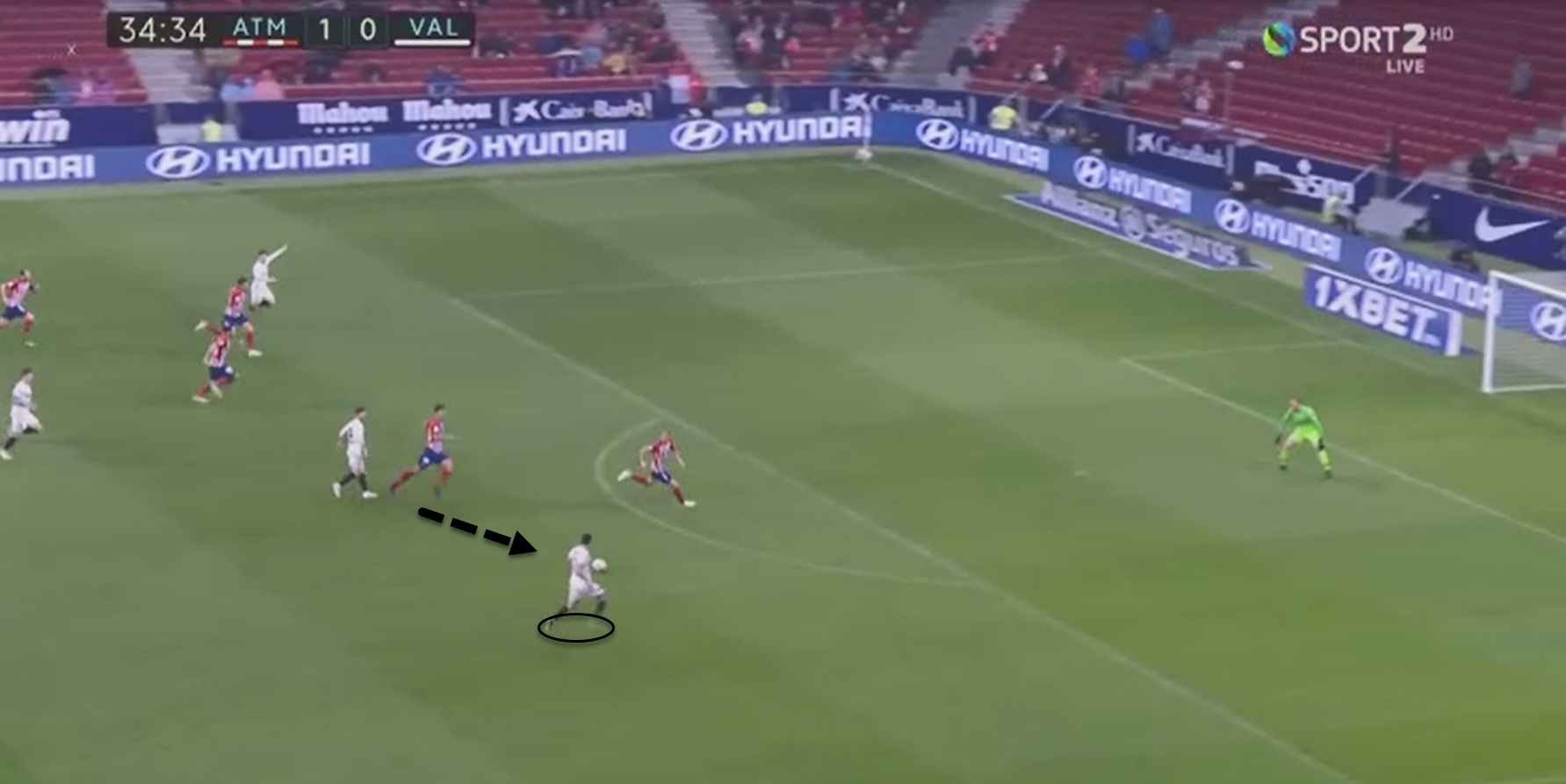 As in any two-legged tie, the onus will be on the home team to take the initiative and try to score in front of their own fans. If the game does pan out this way it will suit Valencia and their counter-attacking style down to the ground. Arsenal will be favourites to take a lead into the second leg, but Valencia could also come away with a valuable away goal.