Following three back-to-back defeats in the Premier League, the hopes for ensuring top four are hanging by a thread for Arsenal. The Europa League is their only other alternative to ensure they bring Champions League football back to the Emirates. Hence, the semi-final tie against Valencia was of utmost importance to Unai Emery to gather some momentum for the second tie away from home.

In many ways, Valencia are in a similar position to Arsenal. Valencia have faced a similar bad run of form recently, suffering back-to-back losses against Atletico Madrid and Eibar in the La Liga. Having had all of their top-four hopes snuffed out by the two-horse race between Getafe and Sevilla, the Europa League remains their only redeemer this season.

The odds for both the teams were almost level going into the match but Arsenal dominated the match via superior tactics and a better plan-in-possession. Although Valencia took the initial lead via a Mouctar Diakhaby header, Alexandre Lacazette’s brace gave Arsenal the lead. Pierre-Emerick Aubameyang also struck in extra-time to give Arsenal a comfortable win, leaving Valencia with all to do the following week at the Estadio de Mestalla. In this tactical analysis, we’ll look at where and how Unai Emery won the match against his former club and what could’ve gone wrong for Arsenal.

Emery opted for a 3-4-1-2 ditching the wingers and adding an extra centre-back to ensure better coverage of the half-spaces. It also allowed Arsenal to defend on the front-foot as one centre-back could step up and the other two could hold the line. This was a good sign that Arsenal were set up to counter-press immediately after they lost the ball. This formation also allowed Arsenal to play with both Lacazette and Aubameyang in tandem as this was vital to Arsenal’s attacking display that evening.

The real surprise was thrown by Marcelino who set his team up in a 5-3-2. He’s favoured a 4-4-2 the entire season and no-one saw this coming. He also fielded three centre-backs; to ensure that they weren’t caught out by Aubameyang’s pace and the runs made in behind by Arsenal’s forwards. However, that didn’t work out as we’ll see below. 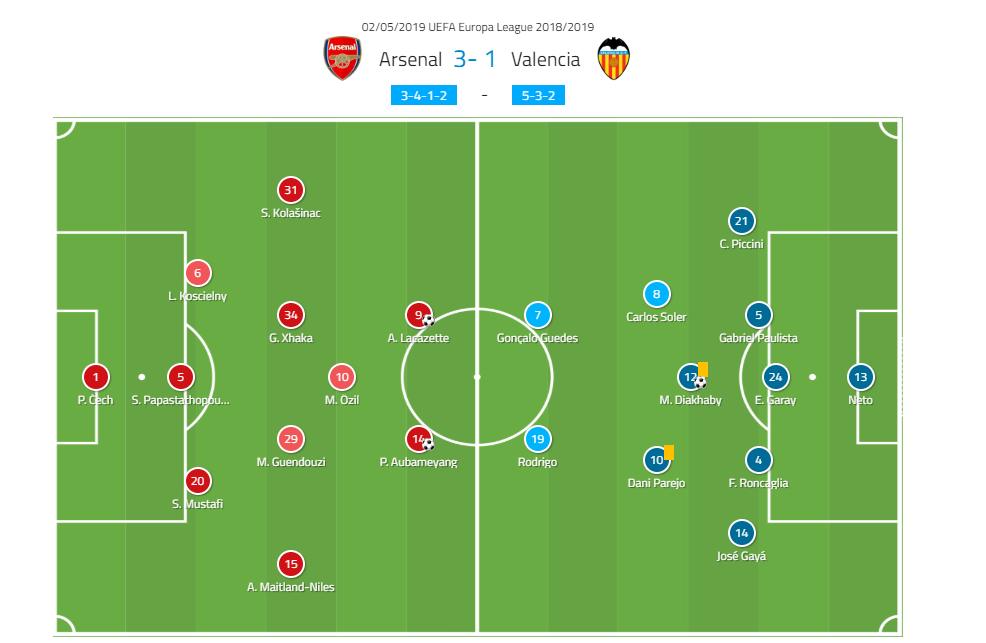 Arsenal have played the 3-4-1-2 many times this season under Emery and we knew what to expect in terms of tactics. Valencia didn’t press very high and usually sat in a mid-block giving the centre-backs ample time on the ball and little pressure which allowed them to set up camp in Valencia’s half. The double pivot comprised of Matteo Guendouzi as the right central midfielder and Granit Xhaka as the left midfielder. Above them, Mesut Özil occupied the central area as the attacking midfielder with the wingbacks either side of him providing width. The strikers were relatively free to move around and attack spaces wherever it opened up.

Emery is known for the work he puts into the pre-match analysis of the opponent and it was noticeable that Valencia’s tactics had taken him by surprise. For instance, he had prepared his team to face a 4-4-2, but Valencia’s formation meant that Lacazette and Aubameyang got frequently overloaded by the three centre-backs instead of two. It also meant Özil had less space to work with as he was man-marked by Diakhaby. However, Emery astutely read the situation and made early in-game changes which led to his team taking firm control over possession and express their creativity with it. In this latest metric by an Opta scientist, we can see how Arsenal controlled the game for much of the time and in all zones of the pitch.

After the initial gusto of pressing was over, Valencia fell into a medium block. Their forwards mostly occupied the zone in between Arsenal’s midfield lines and defence so that they could press whoever had the ball. Their midfield was staggered and extremely narrow lined-up in a 1-2. They solely protected the central areas. This led to the half-spaces being very open – a fact not gone unnoticed by Emery. Behind the midfield lines, Valencia’s back five sat in a flat line, marking Arsenal’s forwards and ensuring they didn’t receive the ball – even when they dropped deep. The wingbacks didn’t directly press Arsenal’s wingbacks but maintained the structure, only engaging their markers when they got on the ball. As is evident in this scene from the match, the midfielders were very narrow out of possession.

Although Arsenal took some time to adjust, they did come up with a solution. Emery had realised that Valencia’s midfielders were too narrow and too pre-occupied to ensure central compactness. Arsenal figured out that the spaces existed out on the wings and in the half-spaces and he used two different tactics to occupy and exploit the left and right half-spaces respectively. After the tenth minute when Valencia had taken the lead, Özil moved away from his #10 position.

Although, Özil does like to drift onto his stronger left side so that he can combine with Kolašinac, in this match he played solely as a pseudo number eight occupying the left half-space. Arsenal could then solely dominate the wings, forming diamonds out wide amongst Kolašinac, Aubameyang, Xhaka, and Özil. This is standard Arsenal tactics and it was used to either get the opposition defenders to react and leave their positions, or to free up Kolašinac or Aubameyang to drive in low crosses. If this didn’t work out and Valencia’s defenders were able to defend well, they’d switch to the other wing and used Mustafi to attack this space.

Valencia found it difficult to react to a successful switch to the other half-space. This was due to the fact that both of their forwards, as well as the midfielders, had to move out to cope with the wing overloads. Following a switch, Shkodran Mustafi was able to carry the ball forwards in the half-space to a significant degree before he was challenged by anyone. His passes were usually directed towards Lacazette who’d drop and was followed by the left centre-back. The left centre-back could afford to drop knowing that the two centre-backs behind him could deal with Aubameyang making a diagonal run. However, Emery decided to create space for Aubameyang by giving Kolašinac the freedom to move inwards from the opposite side and thus occupying the third centre-back. This meant that the outer-most centre-back couldn’t shift over to maintain compactness as he’d be leaving Kolasinac free inside the penalty area. Notice in the attached scene from minute 2:28 how Valencia’s narrow midfield three make it difficult for them to defend the half-space

Although Emery employs a positional-play inspired system in his 4-2-3-1, he is equally flexible when it comes to giving his players the licence to hunt out spaces and react to the opposition’s defence. In this match, we saw Guendouzi in a much freer role, playing as an eight and combining on the right side with Lacazette, Mustafi, and Ainsley Maitland-Niles.

This was crucial to Emery’s plan of overloading the half-spaces as he needed someone to make the runs to drag away the left centre-back or the left-wingback when Lacazette had dropped deep to receive the ball. A very common pattern often repeated was the CB-WB-ST-MF rotation(as seen in the shot below). This essentially saw the centre-back – Mustafi play a ball to the Striker – Lacazette, who’s playing it back to the wingback – Maitland-Niles, who’d play it first time to Guendouzi making a run to the by-line.

Apart from the increased responsibility on Guendouzi, there was a lot of fluidity between the forwards as well. Aubameyang and Lacazette mirrored each other in movements. Since Arsenal were playing without wingers like Alex Iwobi or Henrikh Mkhitaryan who usually tuck inside to occupy the half-spaces, it was up to the forwards to drop deep and ensure a balanced structure. When one forward dropped the other could make a run diagonally or maintain his position at the far post to wait for crosses.

Marcelino got his tactics all wrong at the Emirates with his lack of aggressive pressing and zonal defending. His team barely saw the ball for an extended period of possession as they were blown away by the Gunners’ counter-pressing. If they’re to overcome this deficit they’ll have to be on the front-foot from the get-go against Arsenal – who’ll be looking to defend their two goal lead. Arsenal, on the other hand, will be happy with the result. Although their defence still made a few errors, their attacking prowess saved them, with both of their strikers getting on the scoresheet. If they’re able to protect their lead, they’ll be through to the Europa League finals where they’ll face either Chelsea or Frankfurt for another mouth-watering tie.