Once again the Madrid Derby has stopped by for the second time this season. Although Real Madrid have won more games (13) than Atletico (12) this season, the latter currently sit higher in the league table. For the upcoming derby, both teams seem to be in good shape. Yet, it still remains a matter of tactical intelligence of both teams’ managers which will allow each to play on their strengths while overcoming their flaws where possible.

This tactical preview analysis explains the strength and weakness of both teams in the light of their recent performance and statistics. The preview also maps the possible tactical approaches to be followed by each team and the situations which can dictate which approach will dominate the other.

Real Madrid have scored 11 goals in their last five La Liga fixtures, despite posting an average expected goals (xG) of 1.2 over the course of the season. That indicates an aggressively fierce attack of Solari’s side. Their forward players are not only capable of composing neat link-up plays around the opposing back line but can also threaten the opposition goalkeeper with long-range shots.

This very trait could serve as a huge competitive advantage for Los Blancos over Los Colchoneros in the upcoming La Liga fixture. In the example below taken from Real Madrid’s fixture against Alaves, Real’s first goal resulted from the link-up play between Vinícius Júnior and Sergio Reguilón.

Also, Benzema’s consistent positioning high up the pitch, as can be noticed in the picture, always provides Real with goalscoring opportunities. It is also the attacking presence of other Real players in the opposition area, including defenders, that speaks volumes of Real’s attacking aggression. In the following image, Reguilon’s movement with the ball towards the byline allowed the left-back to cross to Benzema.

The following image pictures how Marcelo’s cross in a Copa del Rey fixture against Girona was converted by Ramos, who along with his teammates was already in the danger area.

This also signifies that Real has goalscoring defenders as well. From the 11 goals scored by Real in the last five La Liga matches, three were scored by its defenders. Real are expected to successfully capitalise on the attacking potential of its defence against Atletico Madrid.

Another strength of Real Madrid already highlighted above is the ability of their players to threaten and even score from long-range shots. The image below illustrates one such instance.

Thus, overall Real have enough attacking capability to outperform Atletico in the upcoming fixture. However, as much as are fierce going forward, they are almost equally fragile and vulnerable in defence. Los Blancos have conceded five goals in their last five La Liga fixtures. They have also the lowest goal difference and the highest number of goals conceded among the top five teams in La Liga.

Real’s defence hardly behaves like a cohesive unit, a matter which gets worse during attacking phases or during defensive transitions. Sergio Ramos also has a famously poor  defensive disciplinary record.

It’s obvious from these scenarios that Real’s back line pushes up high during the attacking phases and lacks the tendency to fall back cohesively. This could give a huge opportunity to Atletico Madrid to exploit Real behind the last line in transitional phases.

Atletico to play with a cohesive defensive unit

Unlike Real, Atletico’s defence works as a cohesive unit. Playing under the supervision of a defence-minded coach, Los Colchoneros possess the best defence in La Liga. Diego Simeone’s men have conceded the lowest number goals in the last five La Liga fixtures played.

Atletico play with a compact low-block defensive shape mostly in a flat 4-4-2 formation. In the upcoming fixture against Real, as they usually are, Atletico will be happy without possession. They will soak up Real’s relentless attacks and stop their ball circulation while waiting for an opportunity to throw a counter-attack.

However, one drawback in Atletico’s defence is that it is open to long shots. Unfortunately, long shots are where Real already have an edge over their derby counterpart.

In particular, Atletico’s defence may lose its shape once their opponents have entered the area by exploiting the wide areas in the final third. These areas are often left open by Atletico as they instead concentrate on central areas. Unfortunately again this is an area where Real excel, exploiting the wings to form link-up passing plays while reaching the byline to put in crosses. Atletico should be very watchful of Real’s long-range shots in the upcoming fixture.

Deploying their low-block defensive strategy, Atletico prefer to pick apart their opponents on the short passing plays in Atletico’s defensive third. From the balls won via interceptions or tackles, Simeone’s men either build-up or counter-attack.

The front two of Atletico move up behind the opposition centre-backs as soon as their teammates win the ball. Atelico’s low-block defence is highly attentive to capitalise on such opportunities. While Real tend to penetrate the final third via the flanks, they also have Modric to play dangerously in central areas. However, the watchful Atletico defence can negate such moves by Real in the central regions.

Nonetheless, when concluding attacks the forwards can end up isolated from their teammates. Sometimes this results in Atletico’s attacks being nullified, as shown in the image below.

The pass map of Atletico from their recent fixture against Real Betis also shows how the team’s attack is centred through Griezmann, and to a lesser extent Morata. However, the two are too isolated from their teammates to make any short-range productive link-ups. If Real press high in the upcoming clash, Atletico could face losing possession in advanced areas and even risk conceding goals due to the high work rate of Real’s wide players during such counters. 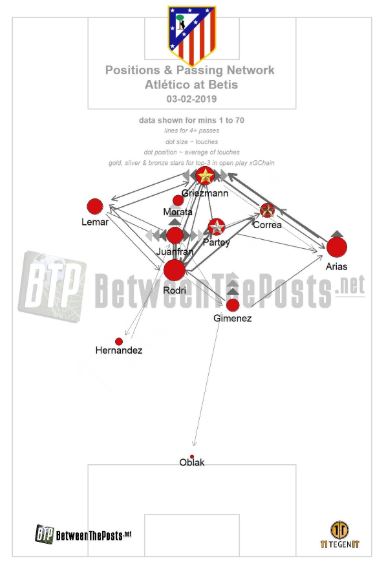 With their wingers and full-backs strongly capable of providing width and pushing high along the wings, Real Madrid know how to dominate Simeone’s men.

The pass map of Real from a Copa del Rey fixture against Girona shows how tilted the attacking structure of the team was towards the left wing. When the industrious Lucas Vazquez is selected on the right, the opposite flank is used to compose far more attacking patterns. 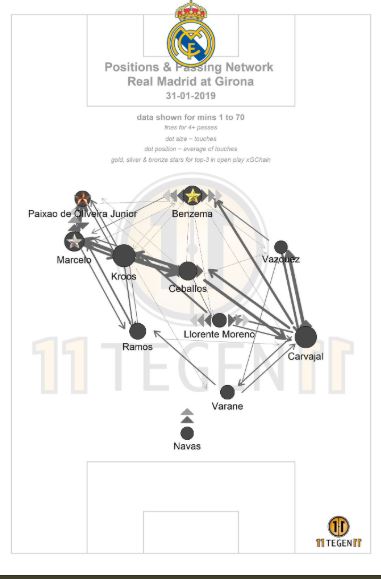 In front of goal, the high work rate of Real’s advanced players, quick passing patterns and long shots are their plus points.

On the other hand, Atletico’s defence is also solid enough to absorb Real’s pressure. Atletico have conceded only two goals in the last five La Liga matches while Real have conceded five. With such a compact defence, keeping a careful eye on the gaps in the wider lanes could provide Atletico with the key to absorbing pressure from Real Madrid.

The xG conceded by each team on average this season, however, doesn’t express any significant difference between the two. The average xG conceded by Atletico is 1.1 while that of Real is 0.9. In other words, both are more or less likely to concede one goal on average per game. Lastly, Atletico won only three fixtures out of the last five La Liga fixtures played compared to Real’s four.

In summary, Real’s edge over Atletico in attack could surpass Atletico’s edge over Real in defence. Sitting in second with a two-point advantage over Real, a draw is enough for defence-oriented Atletico to sustain their position. However, for third-place Real a win is a must to leapfrog their city rivals. Whatever way the two sides capitalise on their strengths, the derby will remain engrossing to watch and talk about.