Schalke posted an easy 4-1 win over Fortuna Dusseldorf in the DFB Pokal’s third round. Die Konigsblauen have endured a difficult campaign in the Bundesliga this season but will take solace in the fact that they are still competing in the Pokal. Goals from Salif Sane, Mark Uth and a first Schalke goal for Ahmed Kutuncu ensured that Domenico Tedesco’s side made easy work of their opponents. 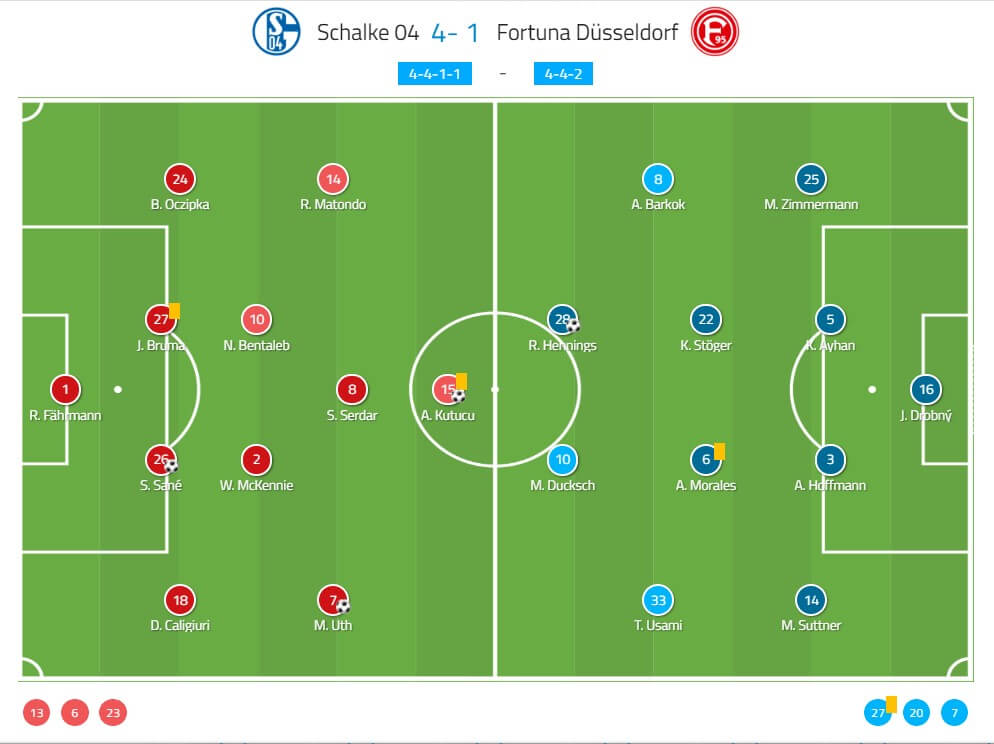 The home side lined up in a 4-2-3-1 formation. German youngster Ahmed Kutucu led the line behind an attacking trio of new signing Rabbi Matondo, Suet Serdar and Mark Uth. Nabil Bentaleb and Weston McKennie formed a double pivot. In defence, Schalke opted for a pairing of Sane and Bruma flanked by Daniel Caligiuri and Bastian Ozcipka. A very youthful looking side, Tedesco sought to offer the youngsters a chance without compromising on the overall quality of the team.

Fortuna opted to rotate their side as well with manager Friedhelm Funkel leaving key players like Dodi Lukebakio and David Kownacki on the bench. The visitors lined up in a compact 4-4-2. Fortuna can’t be blamed for opting to prioritise Bundesliga survival over a cup run.

Schalke boasted quite a versatile and talented midfield which was key as they dominated the game. Nabil Bentaleb played alongside Weston McKennie to form a double pivot. The duo have frequently started together for Tedesco’s side this season as they offer a great blend of energy, playmaking ability and bite in midfield. Against Dusseldorf, Bentaleb was tasked with dropping deeper to receive the ball from defence while McKennie was free to roam and operate as an all-action midfielder.

Schalke positioned their full-backs quite high up the pitch given Fortuna’s lack of attacking intent. Bentaleb’s cultured left foot was especially useful in spraying the ball wide which the home side used to great effect. Interestingly, the home side had less of the ball than the visitors with 49% of the possession. Dusseldorf made 391 successful passes to Schalke’s 385. The result, however, never looked in doubt.

In front of the pivot was an attacking trio comprising of former Manchester City youngster Rabbi Matondo, Suat Serdar and Mark Uth. The wingers were especially important attacking outlets for the home side as the full-backs did not engage in overlapping play. Both the wide men initially took up wider positions but were able to cut inside on their favoured feet; Matondo from the left flank, and Uth from the right.

As they drifted inside, the wing-backs were able to push higher up the pitch and create favourable situations against the opposition defence. Uth especially cut inside a lot, dropping into attacking midfield while Serdar drifted out wide. This, combined with McKennie’s presence meant that Schalke’s attack was very rotational, making it difficult for Dusseldorf to mark them effectively.

Leading the line was forward Ahmed Kutucu. The German opened the scoring with a fantastic curling strike and illustrated how fluid the Gelsenkirchen side’s attack was. He received the ball from Uth on the right wing before cutting inside and unleashing a fierce strike.

Two of Schalke’s goals, incidentally both scored by Sane, came from set pieces. The home side looked threatening from every set piece they won. Opting for runners from the edge of the box, Schalke were able to cause Fortuna issues at corners and free kicks every time. Uth was in charge of both corners and free kicks, and his delivery was accurate and quick on most occasions. 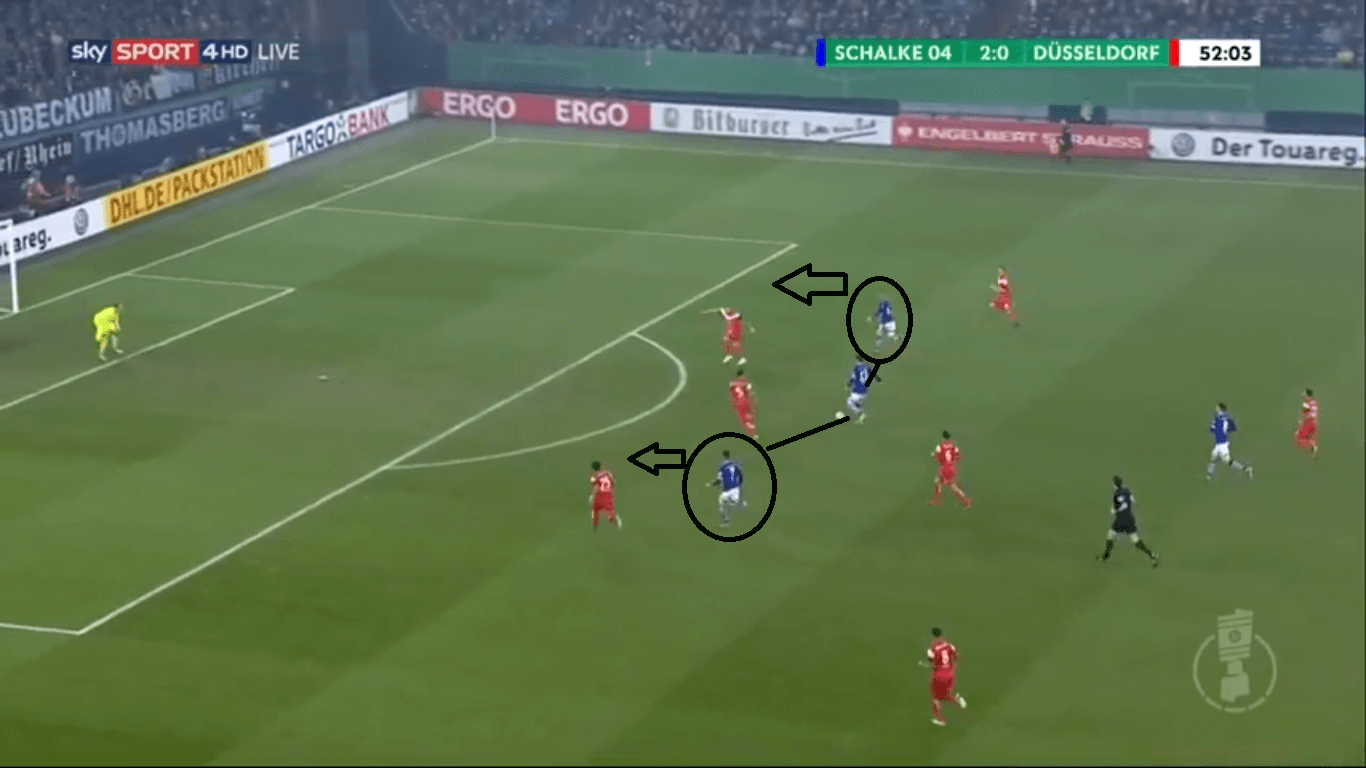 Schalke haven’t had the best season in terms of clean sheets and defensive strength. While Dusseldorf didn’t pose much of a threat, the understanding between the defence was encouraging to see. Former Chelsea defender Jeffrey Bruma started alongside Sane in defence and the duo were able to impose themselves on the Dusseldorf attackers.

While both centre-halves are usually quite aggressive in terms of winning aerial duels higher up the pitch, they developed a good cohesion in terms of covering for each other without leaving the team vulnerable. Tedesco’s system doesn’t utilise the full-backs on the overlap much but Daniel Caligiuri and Bastian Oczipka offer defensive solidity. If Schalke are to salvage something from this season, it’s important that the defence performs as it can.

The DFB Pokal is Schalke’s best hope for silverware this season and perhaps even a European spot given how they are currently languishing in 12th place in the Bundesliga. Schalke enjoyed a great campaign last season but have struggled this season. While it is encouraging to see youngsters stepping up for Tedesco’s side, inexperience has been a real issue. Important leaders like Goretzka, Meyer and Naldo have departed over the past year.

Youngsters like Serdar, McKennie, Kutucu and Matondo represent great talent for the future and Tedesco needs to integrate them into an otherwise under-performing side. An upcoming clash with Bayern as well as a Champions League tie against Manchester City loom for Domenico Tedesco. Nevertheless, the win against Fortuna Dusseldorf is sure to instill some confidence in his side.