At Anfield, Liverpool will face a Herculean task in Barcelona as their opponent after a 3-0 defeat in the first leg game. Jürgen Klopp’s side will need to evolve attacking power up front and defensive solidity in the back. Obviously, this will be a tough nut to crack against the Spanish champions Barcelona.

However, why Liverpool might not be without a chance? How Klopp’s side might overcome Barcelona will be outlined in the following tactical preview. Moreover, we will point out how Barcelona’s positional play needs to be improved in order to ensure Valverde’s side to outplay the opposition press.

In Barcelona, the home-side was capable of beating Liverpool with 3-0. Nevertheless, as football is a game with a relatively low number of goals, the result should never be the only foundation when evaluating a match.

Liverpool deployed a 4-3-3 system facing Barcelona. The biggest surprise of Liverpool’s lineup was that Klopp lined up usual midfielder Georginio Wijnaldum as the central player of their attacking department.

Barcelona, on the other hand, played, as expected, in their typical 4-3-3 formation. With wingers who preferred to tuck inside and high positioned full-backs, Barcelona attempted to progress up the pitch.

Liverpool’s attacking trio played in a slightly asymmetrical shape. Whereas right winger Mohamed Salah often stayed in a wide area, left winger Sadio Mané tucked inside. The Senegalese often tried to get behind Barcelona’s back line with diagonal runs. To create space for Mané, striker Wijnaldum regularly dropped into midfield and therewith acted like a false nine.

The home-side used a 3-4-3 system during their positional attacks. In possession, Sergio Busquets dropped between both central defenders while Arturo Vidal and Ivan Rakitić formed a double pivot in midfield. Meanwhile, Lionel Messi and Philippe Coutinho positioned themselves in the half-spaces. That offered both full-backs plenty of space on the wings.

Especially left-back Jordi Alba used the available space on the flank. Barcelona used his offensive power several times and therefore attacked very left-sided as one can see below.

Liverpool’s high press as the key?

Barcelona prefer a possession based approach under Ernesto Valverde. When preventing Barcelona to keep possession of the ball, one can disrupt their philosophy. Klopp’s side was capable of doing that in the second half. By pressing Barcelona’s back three with both wingers and their striker, Liverpool created equal numbers up front. Therewith, Liverpool could force Barcelona to commit mistakes in the build-up.

Especially in the second half of the first leg game, Liverpool’s press made Barcelona struggling to play out from the back. Liverpool’s midfielders marked the opposition double pivot once the front three started to press. As the wingers of Liverpool always guided Barcelona’s build-up inside, Valverde’s side lacked forward options and often lost possession.

Even if Barcelona played out to their full-backs, Liverpools full-backs moved out to aggressively press. With their wingers positioned inside, Barcelona had no further passing options on the wing and also could not retain possession.

In the second leg match, Liverpool will need to close their right defensive side. As Barcelona use an attacking minded Jordi Alba to attack down the left wing, Klopp’s side will need to stop Barcelona from getting towards that side of the pitch.

As mentioned before, Barcelona could not sustain as much possession as they usually do in the first leg match. Apart from Liverpool’s press, this was also due to some aspects of Barcelona’s positional play.

To find solutions in the build-up, Busquets acted as a holding midfielder in front of the back line in the final stages of the game again. But that adaption did not change much about Barcelona’s struggles to play out. Due to a lack of wide off-ball movement, Liverpool could close down all central midfielders with ease.

In the away match, Barcelona will need to peel off their direct opponents to sustain possession. Otherwise, Liverpool might regain possession often and therewith apply much pressure on Barcelona. To progress up the pitch more often, Valverde‘s side might use more dynamic positioning of their midfielders.

Liverpool press with their compact 4-3-3 which cannot cover the whole width of the pitch. Due to that fact, it might be sensible to outplay the opposition press in wide areas. One possible concept to play over the wings would be the use of rotational movements. With one of their midfielders dropping into a full-back position, Barcelona could overload wide areas and still enable their full-backs to take in high positions.

With Lionel Messi flowing between the lines, Barcelona hold a constant threat for any opposition. Nevertheless, Messi will be needed to outplay Liverpool’s compact shape. By constantly staying between the lines and moving within the gaps of Liverpool’s midfield, Messi can attract several opponents at a time. Therewith, the playmaker could play a vital role through creating more space for Busquets, Rakitić and Vidal.

Being in need of at least three goals, Liverpool will have to evolve penetrating power up front. With Wijnaldum in a rather unfamiliar role, the Dutch was not really capable of significantly supporting his teammates in the attack.

Barcelona will presumably stick to their defensive 4-4-2 shape. As the Spanish champion offers only few spaces between the lines which you can see below, Liverpool might attempt to play around the opposition block.

With the offensive contribution of their full-backs, Liverpool could put in crosses towards their attacking trio. Even if Barcelona can clear the ball, Liverpool’s midfield could win second balls which is one of their biggest strengths.

Nevertheless, Liverpool will also need to be aware of Barcelona’s force in transition moments. With Lionel Messi and Luis Suárez staying high up the pitch during the defensive phase, Barcelona is constantly providing possible counter-attacking options.

Liverpool’s biggest issue will still be the lack of a striker within their 4-3-3. With Salah and Firmino both still missing due to injuries, Jürgen Klopp will have to find a way to adjust his system and lineup to the available personnel. Either Klopp will try to play with Wijnaldum in the attacking role again or he will line up a more offensive player type. Wijnaldum has the advantage of his strengths in pressing. On the other hand, Liverpool might need him in midfield as central advanced midfielder Naby Keïta misses because of an injury, too. However, Jordan Henderson would be a sensible option in midfield as well.

As a consequence, Klopp will probably line up a nominal striker in Divock Origi up front. Xherdan Shaquiri might replace Salah on the wing. He and Mané would have to adapt their movement and might need to drop to collect the ball. But Origi could be a threat within the penalty area allowing Liverpool to put in dangerous crosses from wide areas.

Different to the starting-eleven in the first leg game, Klopp might also bring in Trent Alexander-Arnold as a more offensive right-back instead of Joe Gomez.

Barcelona do not have much reason to change their lineup. Again, they will bank on the attacking power of left-back Alba and the threat of Lionel Messi between the lines. With the versatility of many of their players, Barcelona can differ in terms of their tactical approach. Therefore, it will still be interesting which tactical tweaks Valverde’s Barcelona will use to reach the final of the Champions League.

All in all, it will be interesting to see how Klopp will solve the issue of a missing striker. Their high press might allow Klopp’s side to win the ball high up the pitch. Putting in crosses from wide areas might be a sensible attacking approach. Nevertheless, it will be difficult for Liverpool to find the balance between attacking and covering in order to avoid threatening counter-attacks.

Barcelona, on the other hand, need to improve their positional play compared to the second half of the first leg game. Playing out and sustaining possession against a Liverpool side which need to score at least three goals could be their path to success. A possible concept could be more rotational movements of their midfielders as well as the creation of overloads on the wings. 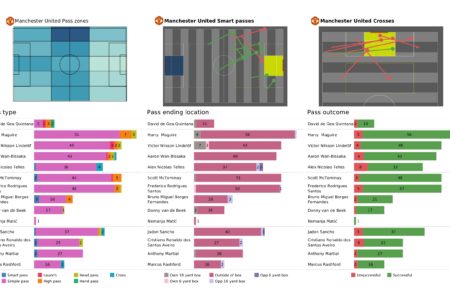